So... after a decent amount of 2013/14 hockey card products have already come out, Upper Deck drops 2012/13 The Cup on us. Does the phrase 'better late than never' apply here? I guess so! Because The Cup is the product that gets just about every hockey card fan excited. I know I certainly am. With this latest edition, Upper Deck has gone on record as saying it's one of the most limited and loaded editions they have ever done. Well... let's check this juggernaut of a release out! 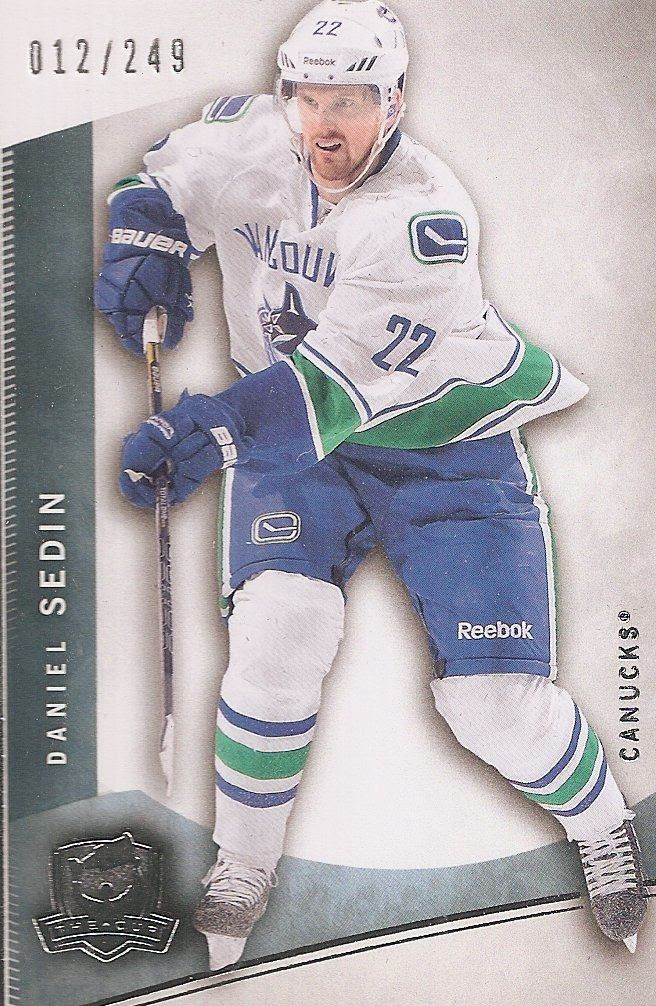 Base Card Design -
As with all The Cup base cards, these cards are THICK. There is no memorabilia embedded to make them thick... they are... just thick! This year's design is top notch, and makes me sad that the hockey card season last year was so abbreviated. Judging from Upper Deck Series One, and not looking at The Cup, I can see Upper Deck had the idea to put out very sleek, very modern, very slick designs in the year 2012/13. The Cup base card steps away from the more ornate designs that they have done, and uses a template that gives a sense of cool and coldness. Silvers, whites, and blue/grey shades dominate the card design. It's really a modern masterpiece. Rather than going over the top, Upper Deck has used a careful hand in making these cards look sharp with a modern elegance. 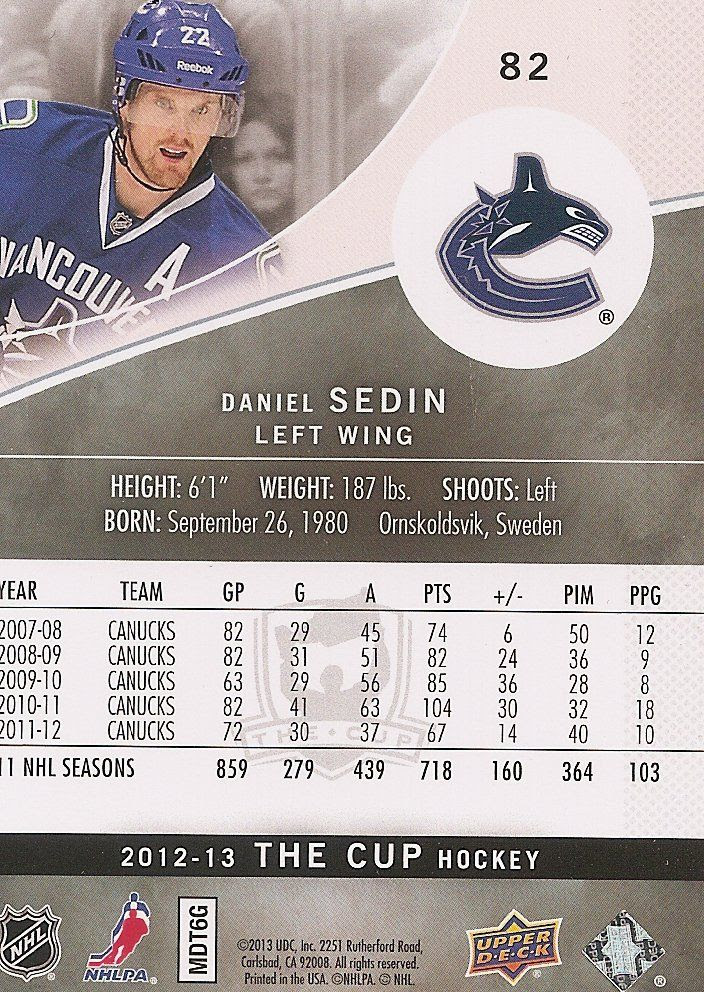 The back of The Cup base card has also been designed very carefully. I love seeing the movement that the graphics create on the card. There isn't a huge amount of information for collectors to pour through with these, but that has never been the point of the highest-end cards. I mean, c'mon, care you going to be flipping through your Cup base to read stats? Of course not. These card backs have been rendered in full-color with a pleasing design that compliments the front beautifully. 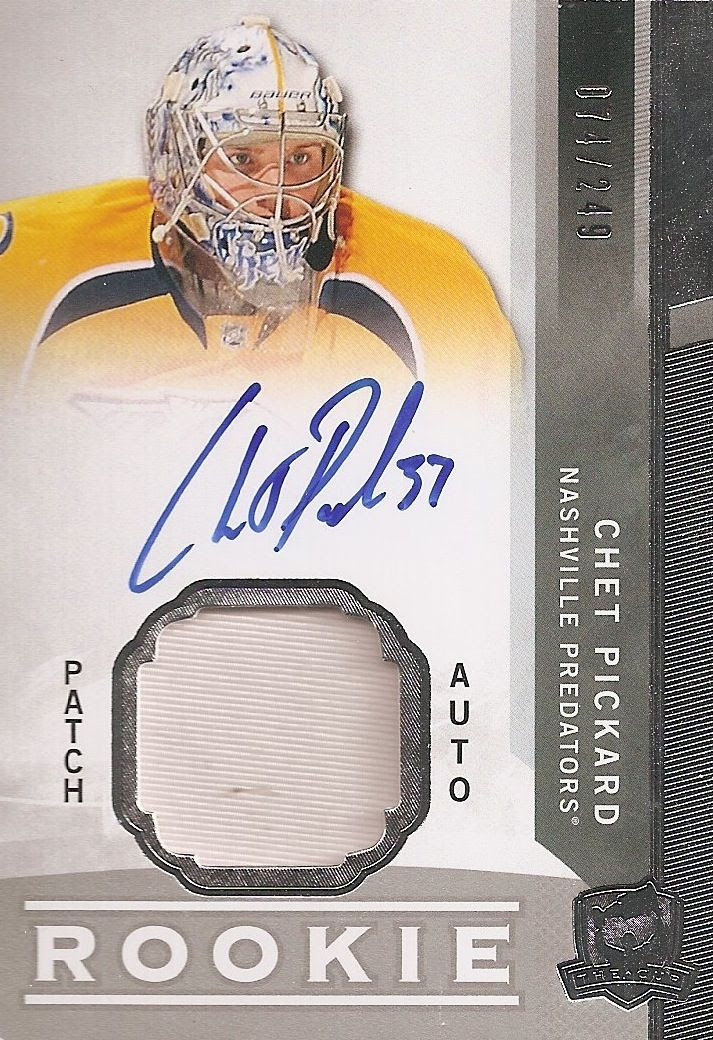 Coming one per tin are the Rookie Patch Autograph cards. These are the top rookie cards to get each and every year. This year's design follows the base cards with a minimalist feel. Though the design has some great elements, it does lack a little luster for me. There seems to be a bit too much white space, with the player photo being a bit on the small side. The RPA design reminds me more of something I would see from SP Authentic rather than The Cup. I do like the design, but I think more could have been done.

Inserts/Game-Used/Autos -
Besides the base card that you get, everything else should be a hit or rookie based card of some sort. There are so many different things to find in The Cup, and all with limited numbering. One tin break will never allow you to see all that it has to offer, but it can give you an idea of what you can expect. 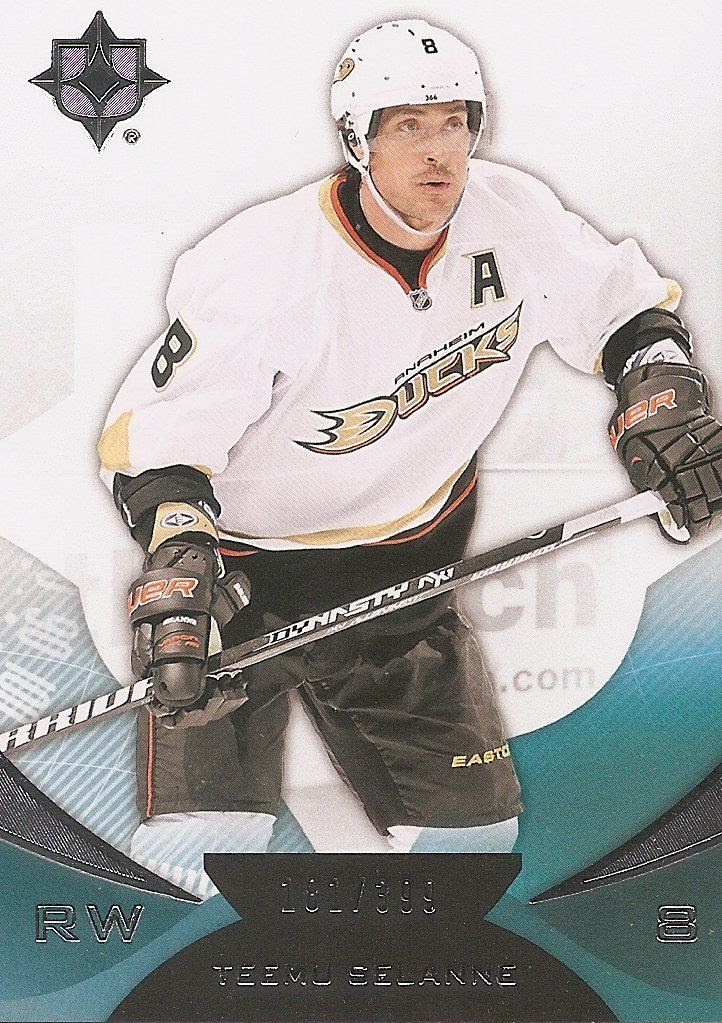 Wait a minute, this isn't a Cup card! It's Ultimate Collection! Yes, Upper Deck has put a 2-card mini pack of Ultimate Collection in the Cup tins this year. It's a great added bonus. The Ultimate collection base cards are no joke. They come on nice, thick card stock and have a phenomenal design. Like I said earlier, I would have loved to see what a full 12/13 Upper Deck hockey release would have looked like. Card designs like this is what I really enjoy! 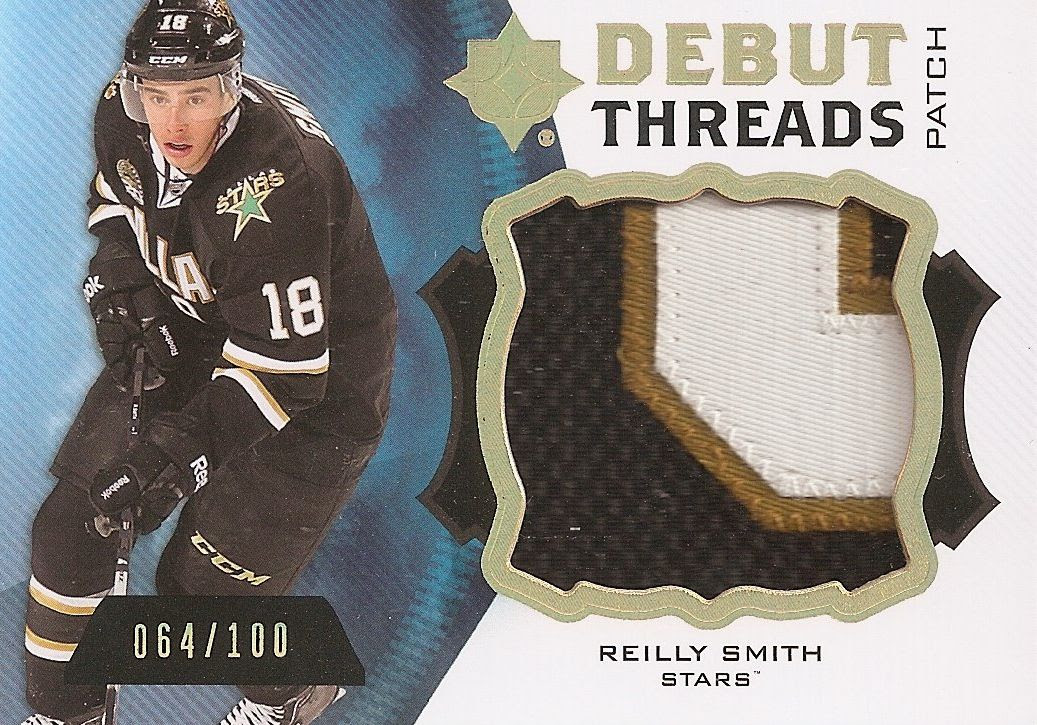 Besides the Ultimate Base card, you get an Ultimate hit. Here's a rather large jumbo patch of Reilly Smith. The patch is a generous portion, and I like that the color scheme matches the base card perfectly. You can expect to find many of the Ultimate Collection staples in these 2-card minis. Ultimate Rookies, Signatures, Patches, and other favorites have been inserted for collectors to find. 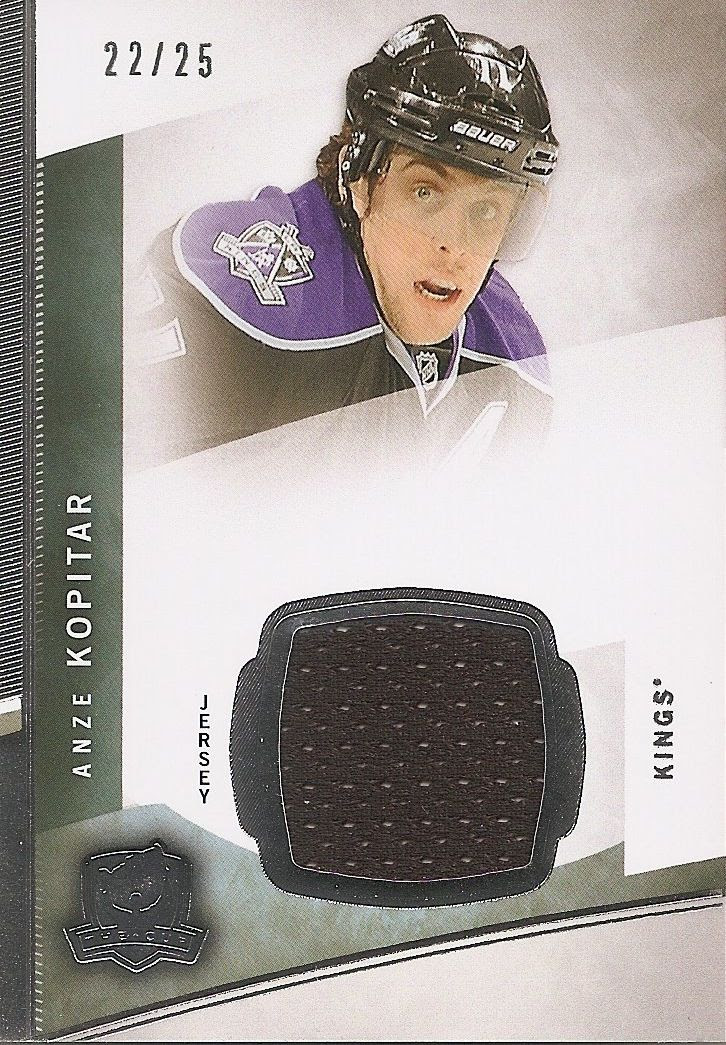 Probably the most mundane card I pulled was this Anze Kopitar jersey base card numbered to just 25. Obviously there is room for an autograph. It's a pretty glaring white space! It's not a great looking card, but it is limited to just 25... at least it's got that going for it. Upper Deck did a better job of this jersey and more limited patch parallel last year. 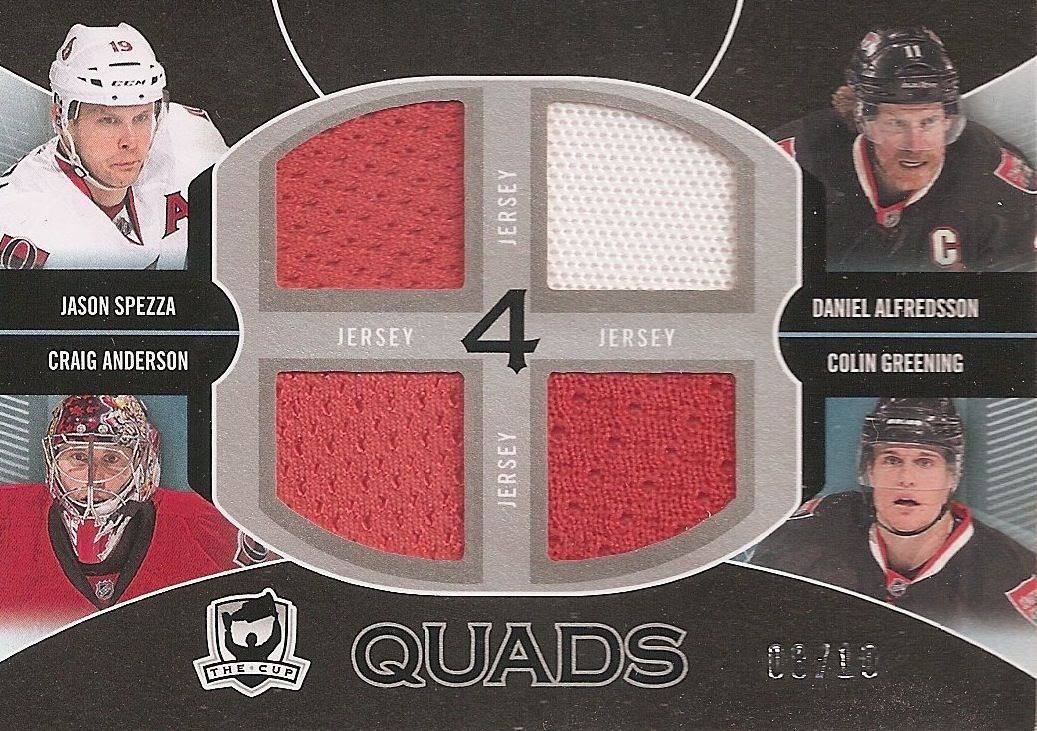 Here's a quad jersey card numbered to just 10 of the Senators. Ten is GREAT numbering, but I'm afraid jerseys aren't that exciting. Patches... well... that would have been great! I'm sure I'll find a Sens fan that will enjoy this card. 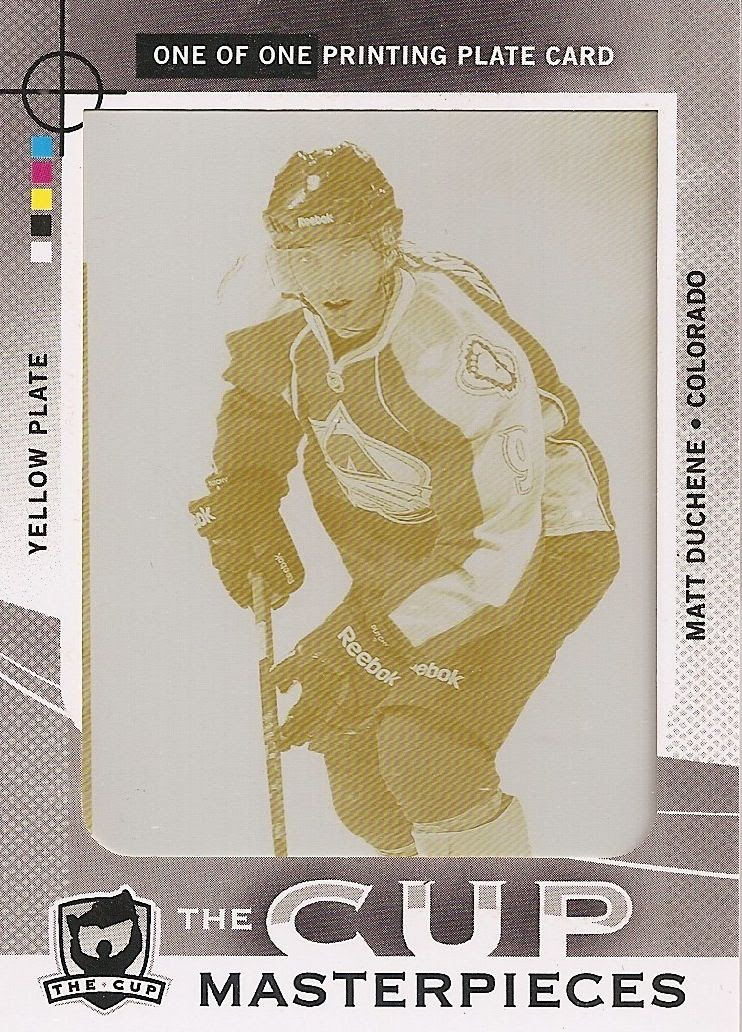 1/1 Printing Plates also make their return. These unique collectables aren't as popular as they once were, but they are still one-of-ones, and they will always be sought after by player collectors. Matt Duchene has had a nice start to this year, so I'm glad to pull this one out. An autograph on it would have been very nice though. 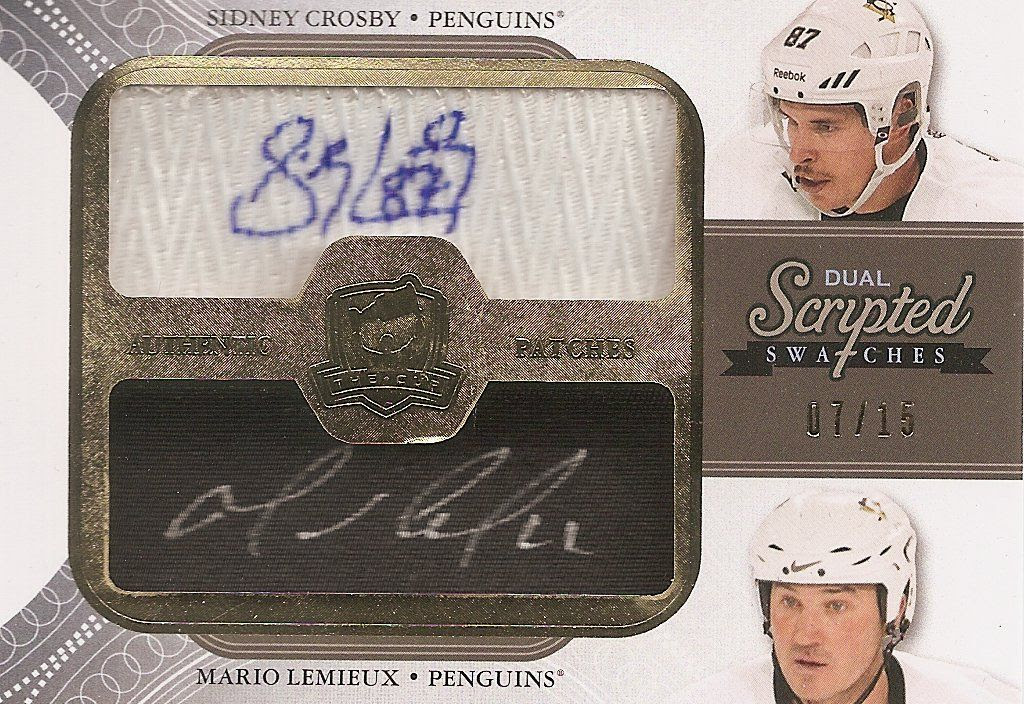 And here it is, my hit of the tin... SIDNEY CROSBY and MARIO LEMIEUX Dual Scripted Swatches. This is why you buy The Cup. I was amazed to pull this card as Crosby does not do dual signings very often at all. This is an exciting piece to pull for me... FOR SURE! One of my best pulls ever! I'm thinking this was a case hit, but I was told a Jaden Schwartz RPA to 99 also came from the same case. I guess Upper Deck was telling the truth when they said this year's Cup was loaded!

I can't even list all the cards that you could find in The Cup besides what I pulled... there's just too many. But just know that The Cup is always filled with amazing cards... drool worthy cards.

Overall Rating -
If you can afford The Cup, but The Cup. It is the most exciting hockey card product you can buy. It is a huge rush to open, and there are just so many amazing cards to get. If you like veteran and HOF autographs, Upper Deck has stated that this year's version has a huge amount of them to find. Judging from what I have seen and what I have gotten, that seems to be the truth. If you can GO AND GET THE CUP.

Check out my box of 12/13 The Cup opened at D&P Sports Cards in Sacramento, Ca: