O-Pee-Chee was one of the few products released during the shortened 2012/13 hockey season. Because of the lack of big named rookie cards, collectors were generally pretty cool towards the cards released that year. In fact, I haven't opened much of the products from that season myself. It should be fun breaking into this blaster and reminding myself what these cards were like! Whenever I make a large purchase for my Retail Reviews, I try to get an average cost per blaster/box of $10. To me, that seems pretty economical. Blasters heavily discounted like this OPC blaster help me get other blasters that may be over the $10 mark (like the box of UD Masterpieces I broke a couple weeks back). The original price of this blaster was $19.99. I CANNOT see myself ponying up that kind of money for O-Pee-Chee. It's just way too much! But seven dollars? Heck yes I could do that!

In terms of the product content, there just isn't much in terms of rookie card selection. And that really hurts a product. I've recently been wondering if there are any rookies in 12/13 products that will actually make it big in the NHL and have cards that collectors really want. I have my doubts. If there is no rookie standout, then really all collectors have to look forward to in 12/13 products are the veteran player cards available. And that's probably not enough to make collectors pull out their checkbooks. Will there be a lot of 12/13 products sitting on shelves for years to come? I'm not sure. But I'd be willing to puck them up if they were at the right price, like this blaster of OPC!

Let's see what comes out of this blaster:


Review -
This was a pretty fun break. I thought I'd get some bigger names in the inserts that I pulled out, but that wasn't really the case. I was happy to get a lot of insert and subset cards though. Just about every pack had something to look forward to, and some packs had two special cards packed in. In 14 packs I was able to pull out 19 inserts or rookie/legend cards. In total I had 2 rainbow foil, 2 marquee rookies, 3 stickers, 4 marquee legends, 7 retro cards, and a pop-up insert. That's a pretty nice haul!

One thing that I now remember about this set is the retro card design. While the standard retro base card is pretty plain (and boring), the marquee rookie and legend versions really stand out! They truly remind me of the fun designs of yesteryear.

My only real complaint, and if you watched the video you could see this, were those darned wrappers! This was probably the most difficult time I've ever had opening up the packs. Shred city! 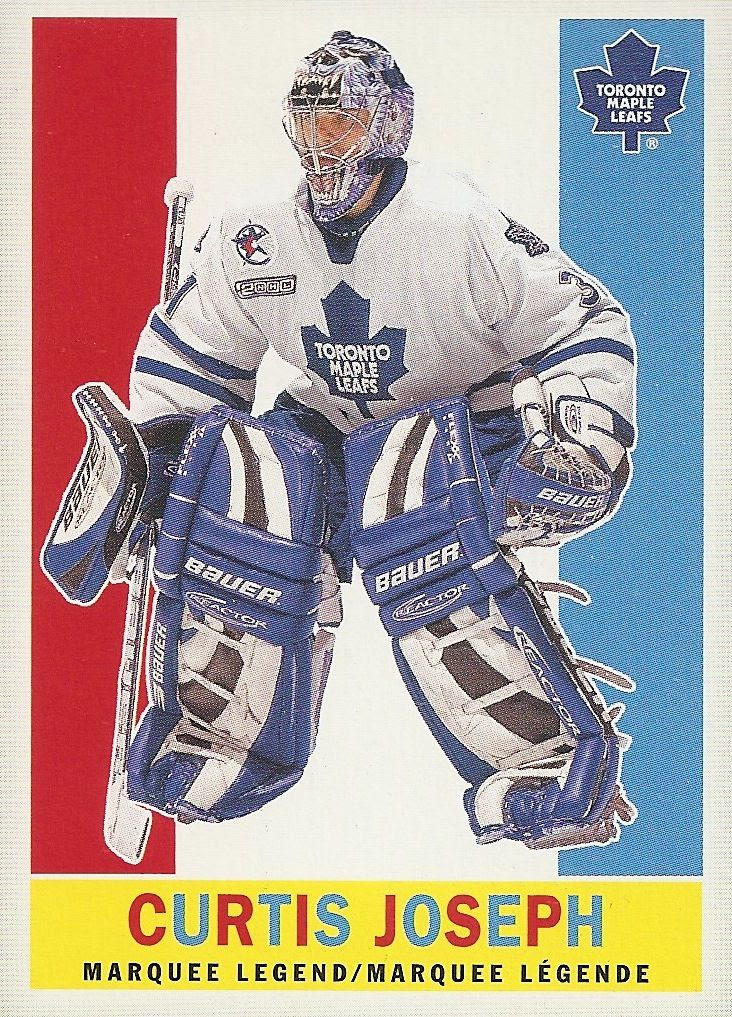 #3 - Curtis Joseph Retro Card No. 545
This might be my favorite retro design ever... maybe... if not top, then definitely one of the best. It's so colorful! The entire card really pops well. It's too bad standard cards aren't made like this anymore. Where's the fun? 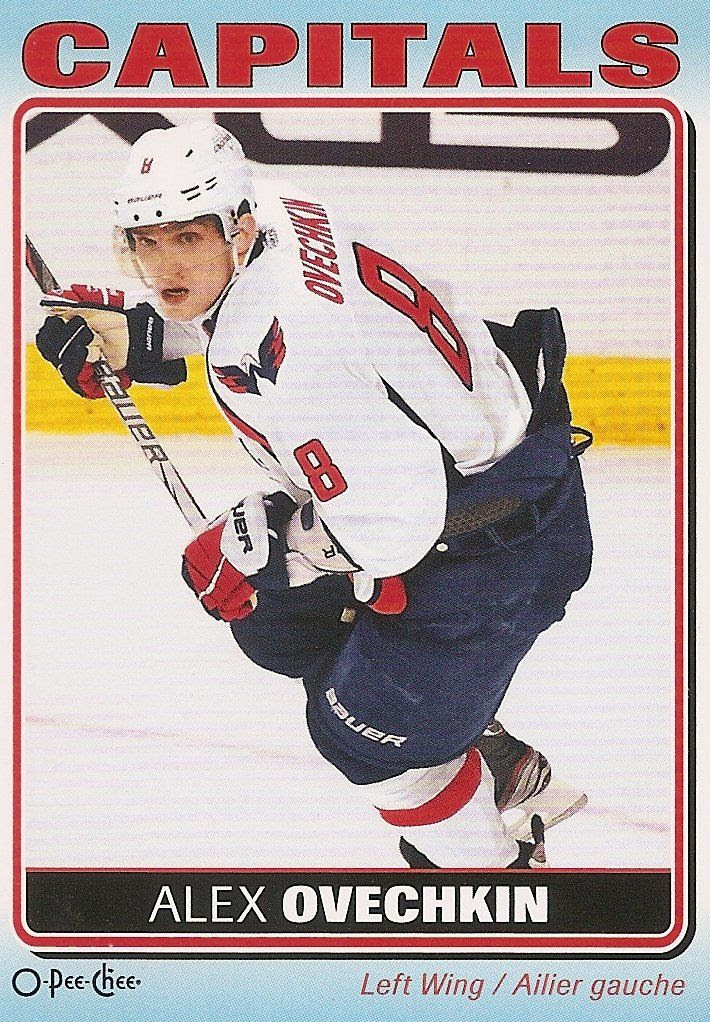 #2 - Alex Ovechkin Card No. S-94
Ovechkin was the biggest name in this break so he gets to land here at number two. The stickers are a fun insert set to find in OPC. I just wished they made them a little different. I'd be better to have the stickers slightly smaller than the card (like the way Garbage Pail Kids used to be) so they'd be easier to peel. But... I wonder if anyone peels these anyways. Anybody? I'd love to know if you do! Mad props if you stick these to your Trapper Keeper. 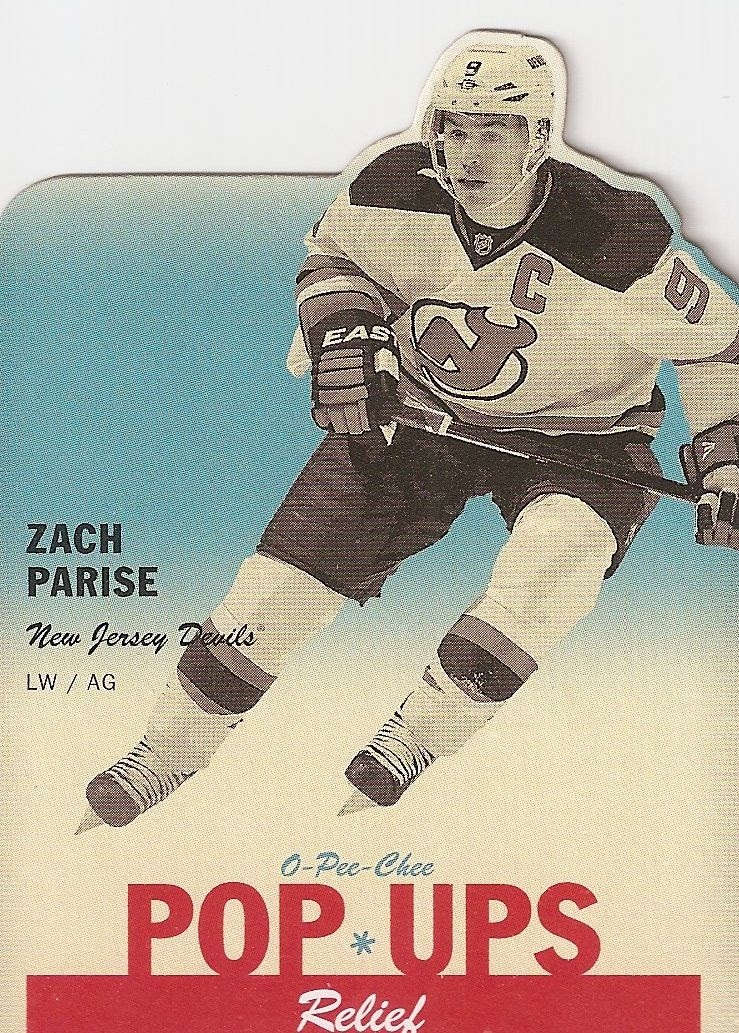 #1 - Zach Parise Card No. PU-32
These Pop-Ups insert cards look so great! They have a very retro color scheme and look to them. And the die-cutting is well done. I remember really liking these when I bought my hobby boxes of OPC for review. A quick check of the blaster box odds states that these were inserted 1:32 packs. So, not every blaster has one. Glad I was able to pull this out!

Overall Value -
Hey, it's seven bucks! It was a fun little break on this morning on the cheap. Obviously, if you're looking for the huge hit... or even any hit for that matter, you're not going for OPC blasters, but if you want to rip something a little different... this is for you! Also, those who want the challenge of putting a large set together would do well to look towards OPC. It's got old school collecting written all over it.