Last week in Cardboard Commentary, I wrote about a bad situation I had on eBay. It's been a week later, and I still haven't received the card I wrote about in that post. At this point, I don't think I'll ever see it in my mailbox... but I'm not going to spend any time worrying about it. Today, I'm going to touch on a much more positive side of the hobby experience. Again, it deals with a rare Couture card... but this time with a much better ending! 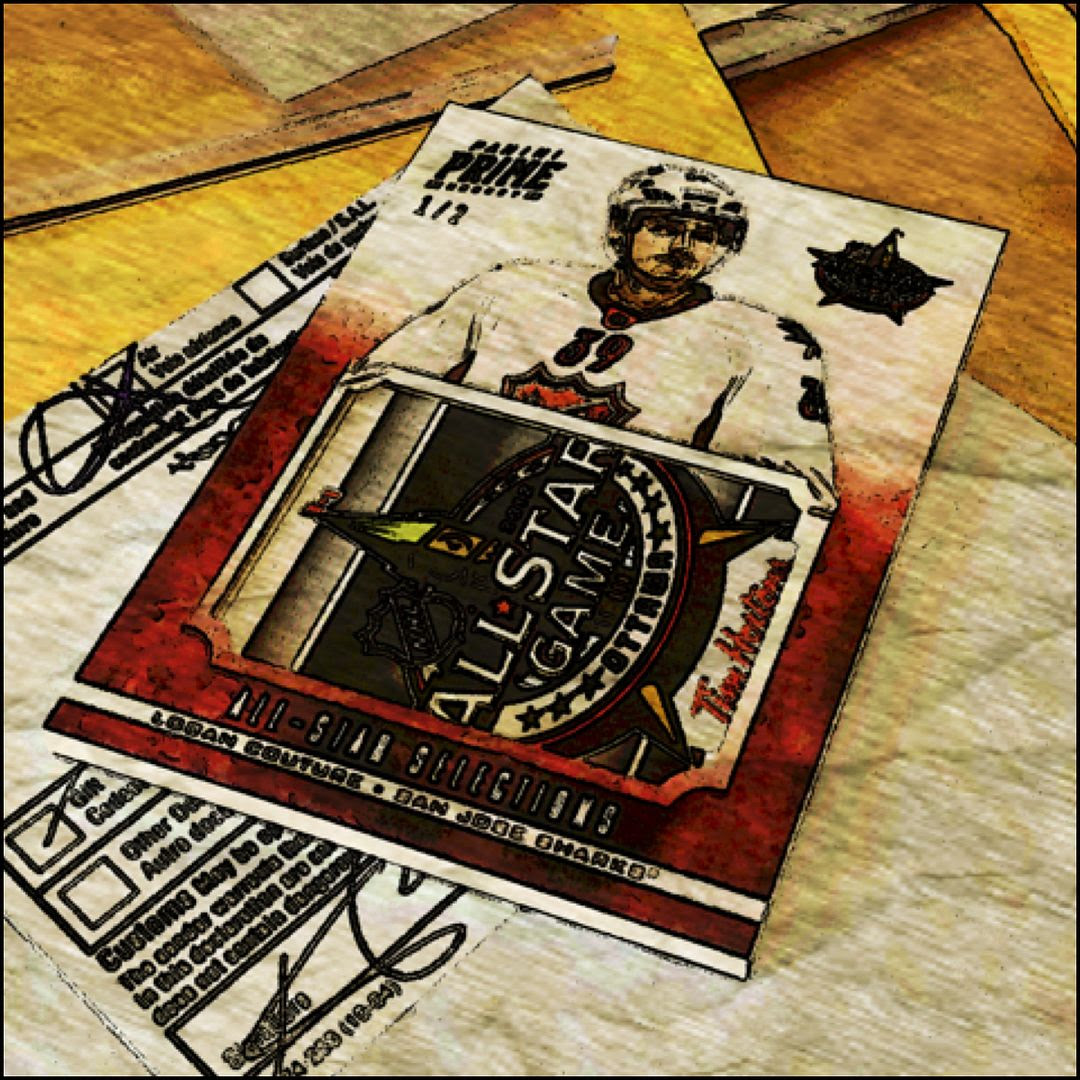 A couple of weeks ago I suddenly received three Youtube PMs in a row regarding a rare Panini Prime Couture card numbered to just 2. Most people who follow me on Youtube know that I am an avid Logan Couture collector, and a few of them promptly sent me the link to a group break video of it being pulled. They were Youtubers elijahking13, DeadlineTV2, and BruinsMA888. Thanks guys! Three completely different people on Youtube sent me private messages regarding that Couture card. To me, that's amazing! They all knew that I collect Couture, and they took the time and initiative to let me know of a card I might need. This isn't the first time that this has happened, in fact, other Youtubers (***cough cough Datsyukify cough***) PM me links to Couture cards I might want as well, but this is one that really came to fruition in a big way!

I had my doubts that I would be able to obtain this particular Couture card. First of all, it was pulled in a group break. Group breaks are done and then sent out to the random people who participate in them. I would have to contact the person who did the group break, and then somehow get in touch with the person who won. Not a long shot by any means... but long enough for sure! It was long enough that I was about to just let this one go, or just hope it was put up on eBay by the lucky group breaker who got it.

Somehow, I decided to just give it a shot and contact the breaker who pulled the card. One of the Youtbers who PMed me gave me the store contact information. OTCards turned out to be the breaker. I contacted them and they were kind enough to pass on my information to the person who got the card. A few days past and I didn't hear anything, so I thought that was that.

Hah, well... turns out-that-was-not-that as the person who got the card sent me an email message. In our first few exchanges I offered him a dollar amount I thought was fair. He also was willing to accept trades for higher-end Avs cards, but I didn't have any. In the process of emailing back and forth he told me he had a higher offer for the card. I was a bit bummed out... I really wanted that card, and was hoping that the other potential buyer would drop the ball. I expressed a bit of sadness that the card was about to be out of reach for me, but mentioned that I did have a large Couture collection, and that his Prime/2 card would have been great in it.

The very next email he sent was informing me he was going to sell the card to me for my price. My jaw literally fell open! Though he had a higher offer, he appreciated the fact that I had put together a large Couture collection, and wanted the card to be a part of it. I was amazed.

See... usually, everything stops at the almighty dollar. I mean... if you can get more money, then get more money no matter what! Well, that wasn't the case with this seller. He was willing to take a little less and accept my offer, and let the Couture join my PC.

Long story short... I immediately Paypaled him the money with a little extra for shipping and he sent the card out about a week ago.

I got the card today.

Here's me opening up the package:


The card is absolutely amazing! Big thanks to Kam for his willingness to sell me the card and send it out so quickly. I really appreciate it. And I also appreciate all the folks who helped bring this rare Couture card to me! It will now join my Couture collection. If you want to see my collection of Logan Couture cards, CLICK HERE.

I hope you enjoyed this story! I'm glad I could post something positive after last week's more depressing Cardboard Commentary.


Thanks for being amazing hockey card hobby!!!
Posted by luke. at 4:31 PM