Hockey collectors had a sneak preview of Prizm in last year's Rookie Anotholgy... and now the full-release of Prizm is upon us! Prizm is a mid-level product that all collectors can afford to try - whether in pack form or by the box. Those who love a chrome-type look should especially enjoy these cards. Prizm has been a hit with Panini's other sports releases. Let's see how it does with hockey! 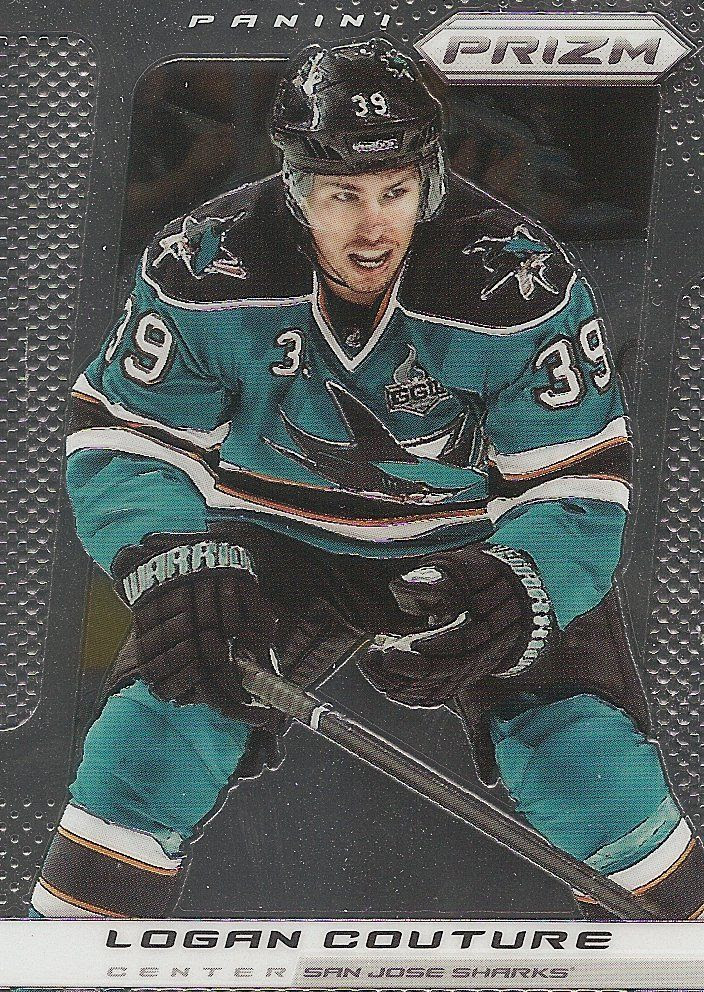 Base Card Design -
The Prizm base cards are fully-foiled and come on a relatively thick stock. It's not heavy like Dominion or Prime, of course, but these cards have a nice solid feel to them. If you compare them to Topps' Chrome products, these are noticeably thicker and do not have the problem of bending that those cards do. The Prizm base cards lay flat and keep their form very well. In terms of design, the chromed look lends itself well to a modern look, and Panini has done just that. The graphics and fonts are very modern in nature - they are slick, elongated, and give the cards a 'fast' feel. The border of the card uses simple shapes and textures to frame the player. And the full-color player looks great popping out of the chromed out border. I think it can be difficult to make really unique designs with a chrome-type foil, so if Panini continues to release Prizm in future years, I'll be interested to see how the designs change to be unique from year to year. 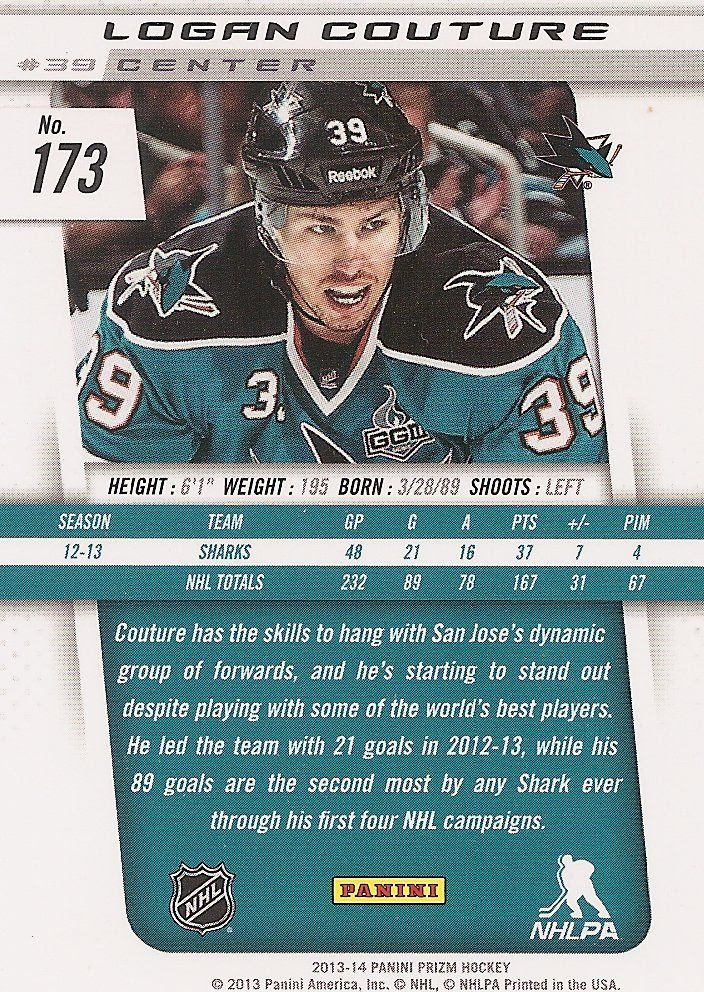 The backs of the Prizm cards have some strong design elements to them. In previous Panini hockey reviews, I had criticized the bland nature of their hockey card back designs. I am not a huge fan of the Prizm back, but it is noticeably better than Panini's other efforts. It definitely shows that they are concerned about making a good looking backside. With these backs, I like the fact that similar design elements such as the player name are mirrored from the frontside. The card numbering space is big and bold... that's a plus. And I enjoy the team colors used as an accent. All good things for sure. My real qualm with the back is that there is too much wasted border space. I wish the center graphic and vital information was expanded out a bit more. Everything to me just looks a little squished, when it didn't have to be. Rookie cards make up the back-end of the Prizm base set, and there are quite a few of them! One hundred to be exact. Rookie cards come one-per-pack and share the same design as the base cards. The only additions these cards have are the two rookie card logos. One is a small shield that denotes the double rookie class, while the other is just the word 'rookie' in large font. Getting the exact rookie you want in a box can be a challenge as it would take five boxes with perfect collation to complete the rookie set.

Inserts/Game-Used/Autos -
Prizm is a product that will not be known for its hits. Collectors will find only two sticker-autograph cards per box, and no memorabilia hits. Nope. No jerseys. No patches. I think Panini is really trying to push and bring back the popularity of the parallel card with this product. Will it work? I'm not sure, as hockey collectors haven't really gravitated heavily towards parallel cards. But that's what Prizm is really banking on, because Prizm is all about parallels. 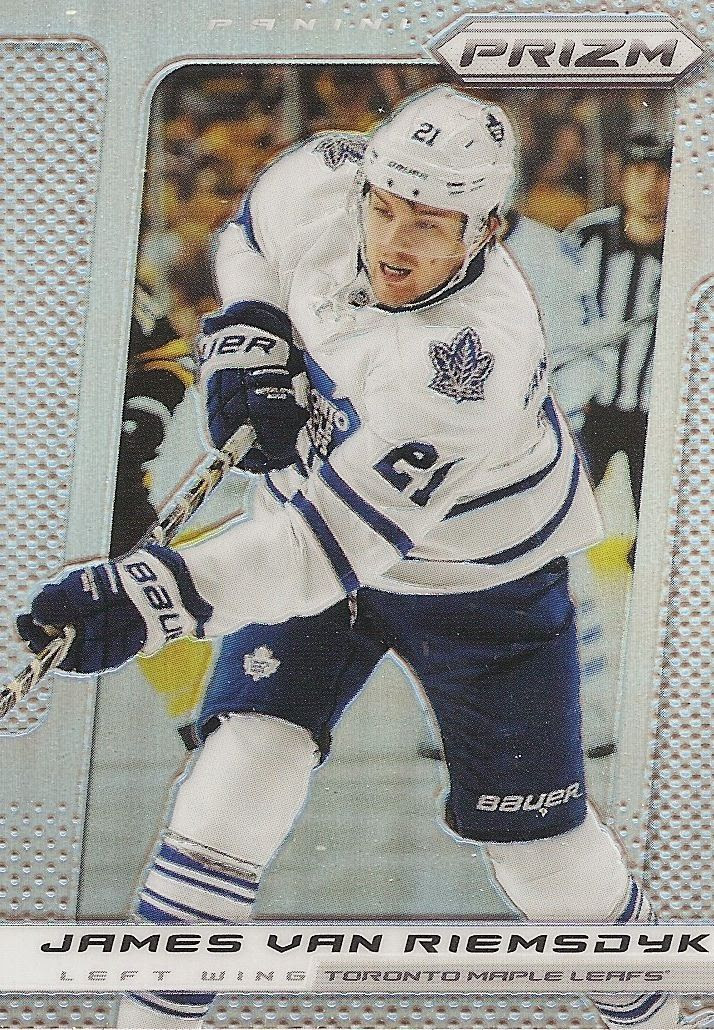 The most basic parallel card is the Prizm parallel card. I know, I know... that sounds goofy as the cards are all called Prizm... this card has a holo-foil look to it when placed in light. Check out my box break below to see this card in all its shimmering glory. These Prizm rainbow foil cards are not numbered, but they can easily be differentiated from a standard base card when seen in person. Collectors who follow other sports will be reminded of Topps refractor cards. This is definitely Panini's take on a refractor. I'm sure other collectors will still call them refractors even though I'm sure Panini wouldn't like that. I guess it's like going to a non-McDonalds fast food restaurant and asking for McNuggets. They'll know what you're talking about, even if they don't call it that there. 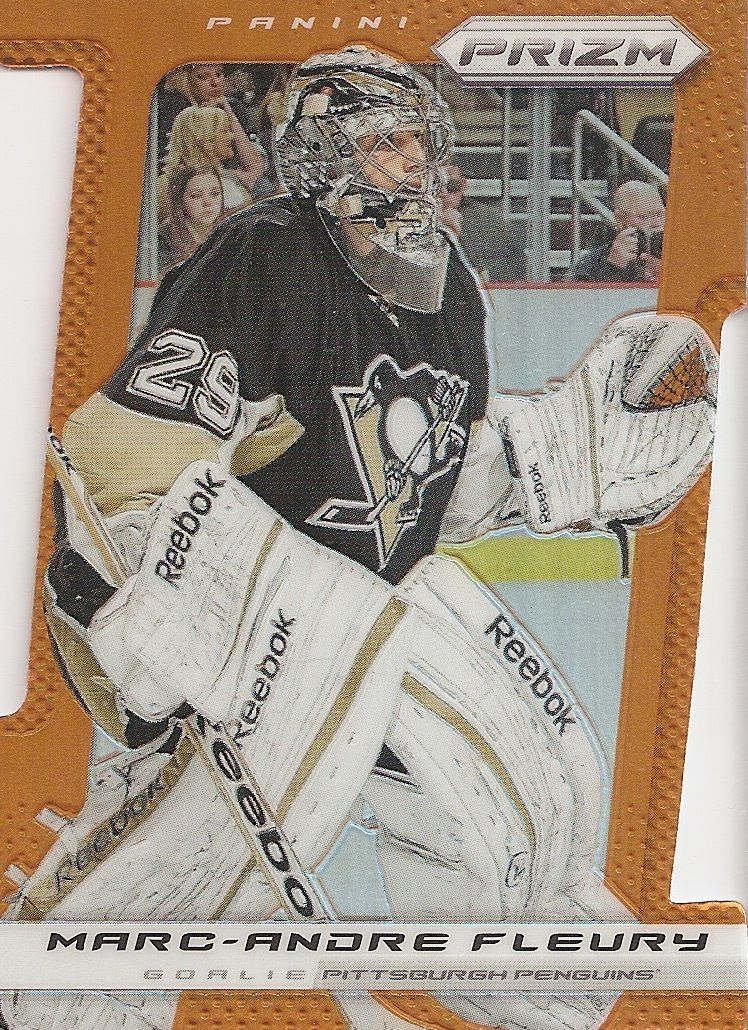 The orange parallel cards are very sweet looking. The cards have a bright orange border that really pops. I only pulled one in my box, but in buying five packs more I was able to pull another one. The orange parallels are limited to just 50 serial numbered copies each. It's a great looking parallel card that I think collectors will enjoy chasing. Besides the orange parallels, there are purple cracked ice wrapper redemption parallels, green, blue, blue pulsar, red, red pulsar, gold, and finite versions of the base set and rookies. Does that sound like a lot? Well, it is! Blue parallel cards are Wal-Mart exclusives while Reds are Target exclusives. Gold cards are only found in hobby and are limited to just 10, and the finite versions are the one-of-ones. Player collectors like myself are going to have a heck of a time tracking all these down! 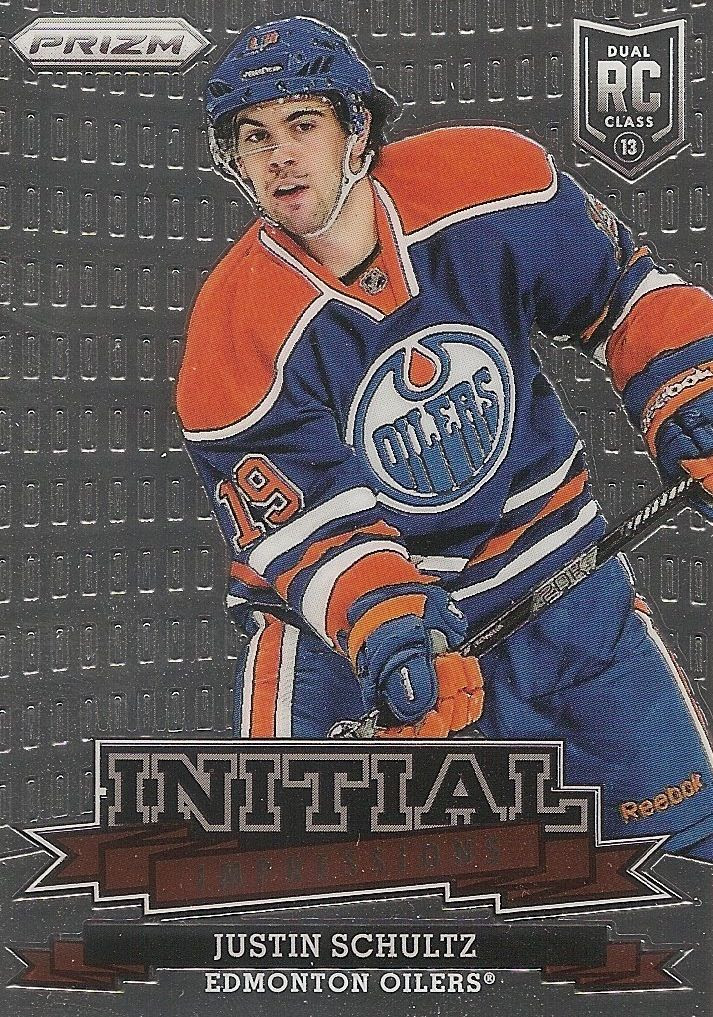 Initial Impressions is an insert set focused on the new rookie talent. This little set is a great way for Panini to add in a few more cards of the rookies. From a design standpoint, I really do like the Initial Impressions logo and the heavy texturing going on in the background. 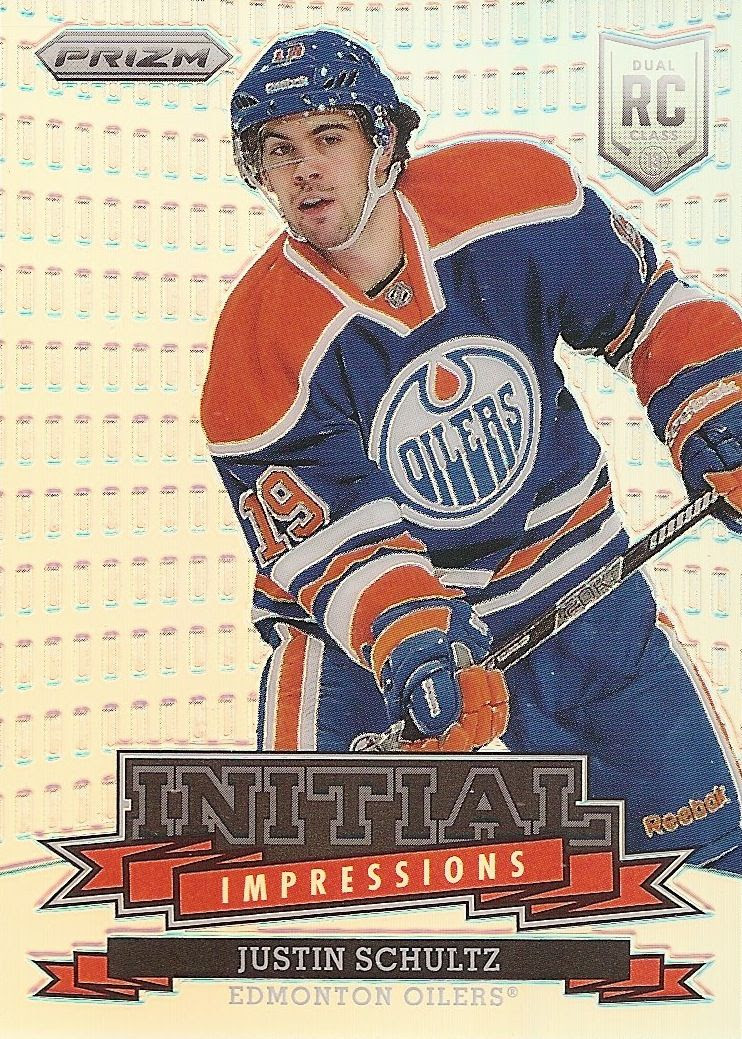 Not to be left out, many of the insert sets are also graced with parallel versions. As you can see from the Schultz card above, it's the basic Prizm variation. Orange, gold, and finite versions can also be found. I must say that the parallel rainbow foil does make the cards look a ton better. Scans of these rainbow foil cards look much better too! 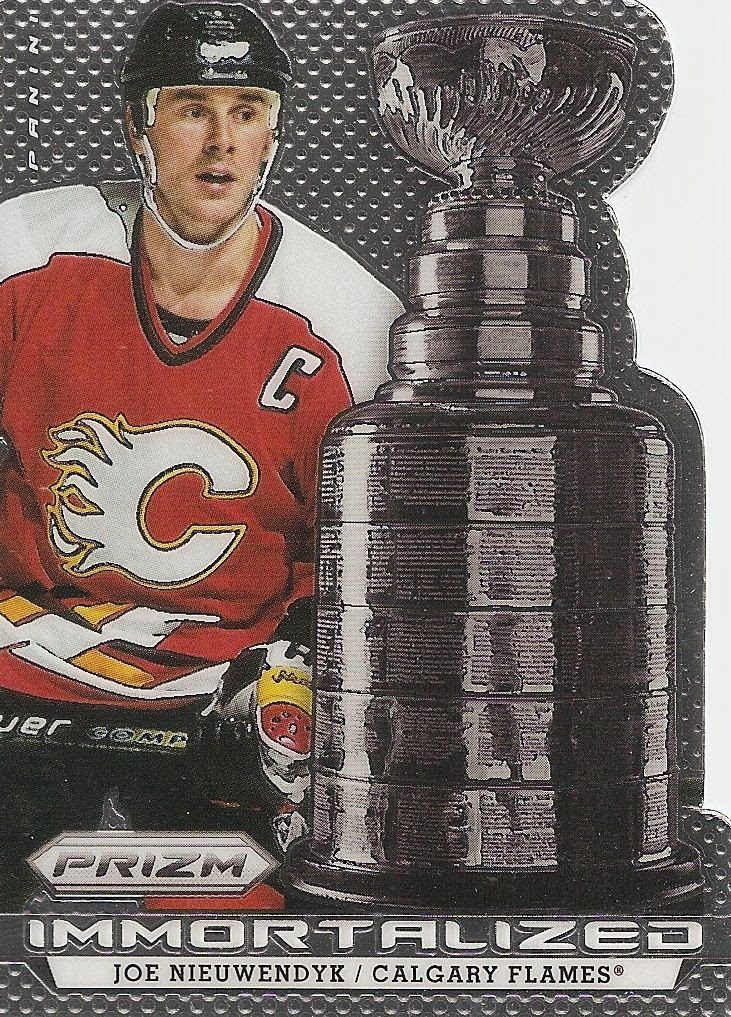 Immortalized is an insert set based on players who have their names engraved on the Stanley Cup. These cards are nice because they feature die-cutting. Many hockey collectors enjoy seeing the Stanley Cup on their cards, so I'm sure these cards will be appreciated by many. Panini has included both retired players and current players in this set. As with all the other Prizm sets, this one has parallel versions of itself. 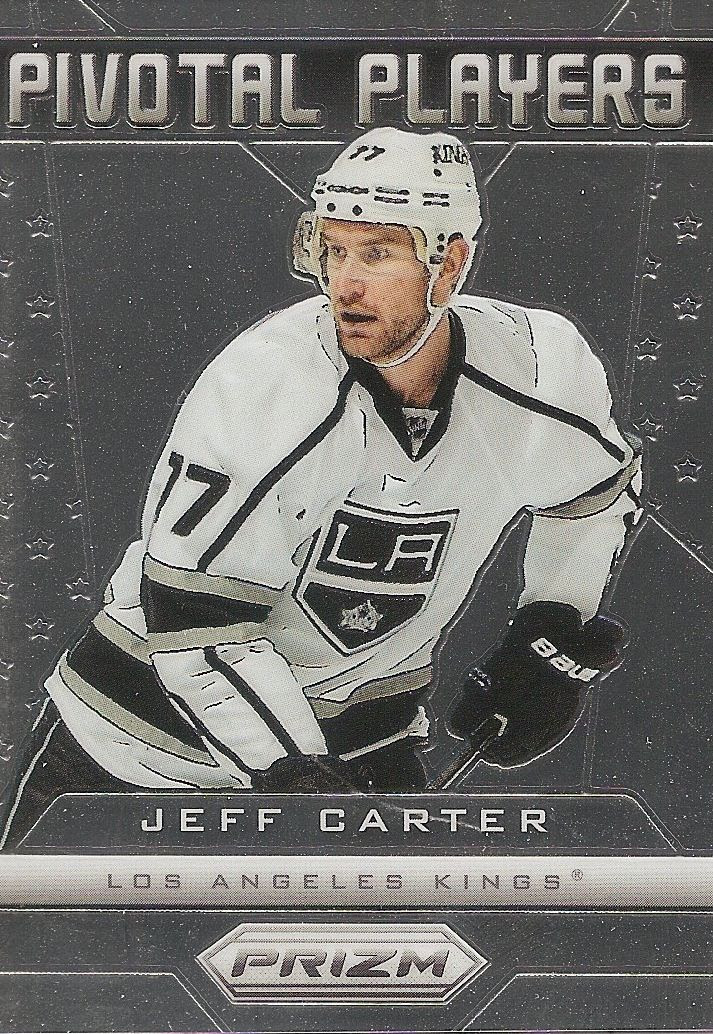 Pivotal Players is another insert that can be found in Prizm. This is set of cards that I'm not as big of a fan of. The design of the card is pretty pedestrian, and while it's nice to get more star players, they do seem a bit unnecessary. I don't see a point to having these cards in the set. Other inserts that are in Prizm that I didn't pull were Endless Impressions and Net Defenders. The Endless Impressions cards are of all-time NHL greats. And of course the Net Defenders are cards of goalies. Both of those sets seem to be good additions, I think there was just one too many insert sets... and that one too many was the Pivotal Players. 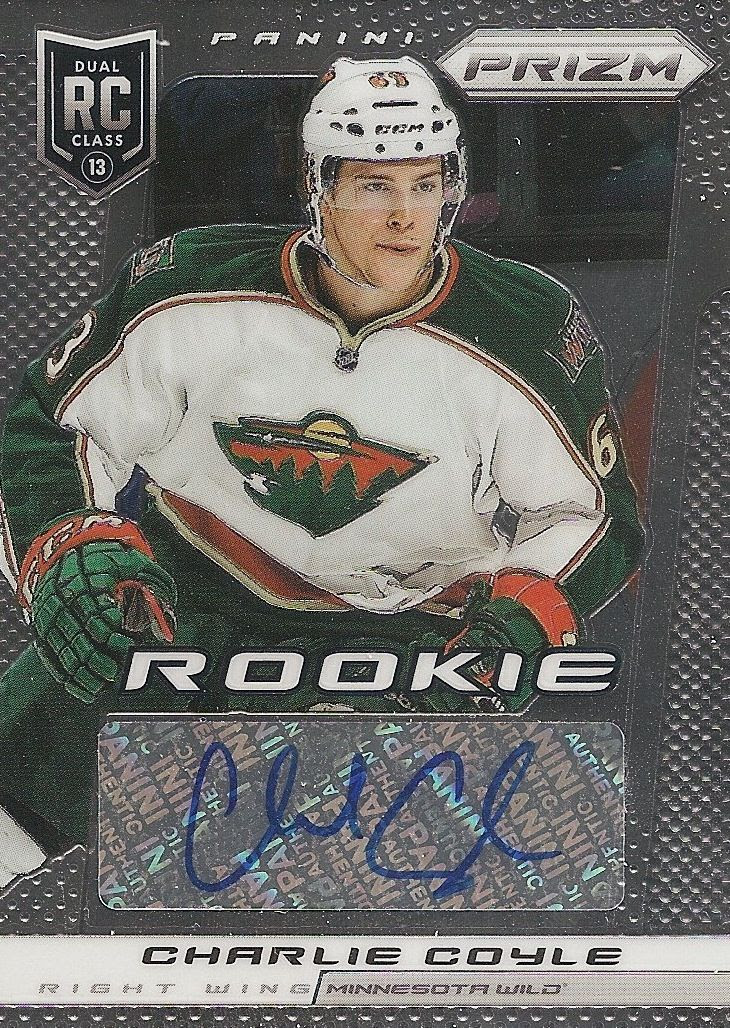 As I have already mentioned, each box of Prizm will come with two autographed cards. There is a huge variety of autographs that you can pull, but getting a big named star or rookie will be difficult as they are most likely short-printed. The autographs are on-sticker, and the cards parallel the look of the base. They are decent looking cards, but they don't stand out in a meaningful way. It's my opinion that they are there to add a little value to the boxes, and entice collectors to purchase the product. Like I said, I really think Panini is looking for collectors to collect parallel cards again. Getting these autographs is sort of a bonus.

Overall Rating -
Hockey collectors are a group that really likes their hits. That's what entices us to purchase the cards. I think Panini is trying to change that perspective with this Prizm release. Panini has put in a huge amount of parallel cards to chase with Prizm. If collectors do indeed go nuts for them, they will have to go to Target, Wal-mart, and send in wrappers to get all the cards they want. Collectors in other sports have gone nuts for parallels before, so maybe hockey collectors will too.

If the parallel cards do turn out to be a hit... then Prizm will be a good long-term collectible product. If it doesn't, and collectors are soft regarding the parallel chase, then Prizm may peter out quickly because there isn't much hit content to find per box - only two autographs (with the likelihood of getting a good one pretty low).

I think Prizm is a wait and see type of a product. As it stands at release, it's pretty affordable for a box - you're looking at around or less than a hundred dollars. But is what you get in it worth that hundred? It all depends on how the parallels do!

At the price, I'd definitely get a box or two to give Prizm a try. But I would hold off buying tons of it until I was sure the value and demand is there.

Check out my box break of 13/14 Prizm Hockey at D&P Cards in Sacramento, CA: