ITG has made their way through the decades of hockey these past few years. They started in the 70's with their 1972: The Year in Hockey release, then they came out with Decades - 1980's, and have recently just released their trip back to the 90's with Decades the 90s. The 90's was a great decade, and many collectors remember it fondly. I myself got into hockey in the 90's! It should be pretty cool to see all the players I remember as a young hockey fan in this new set of cards from ITG. 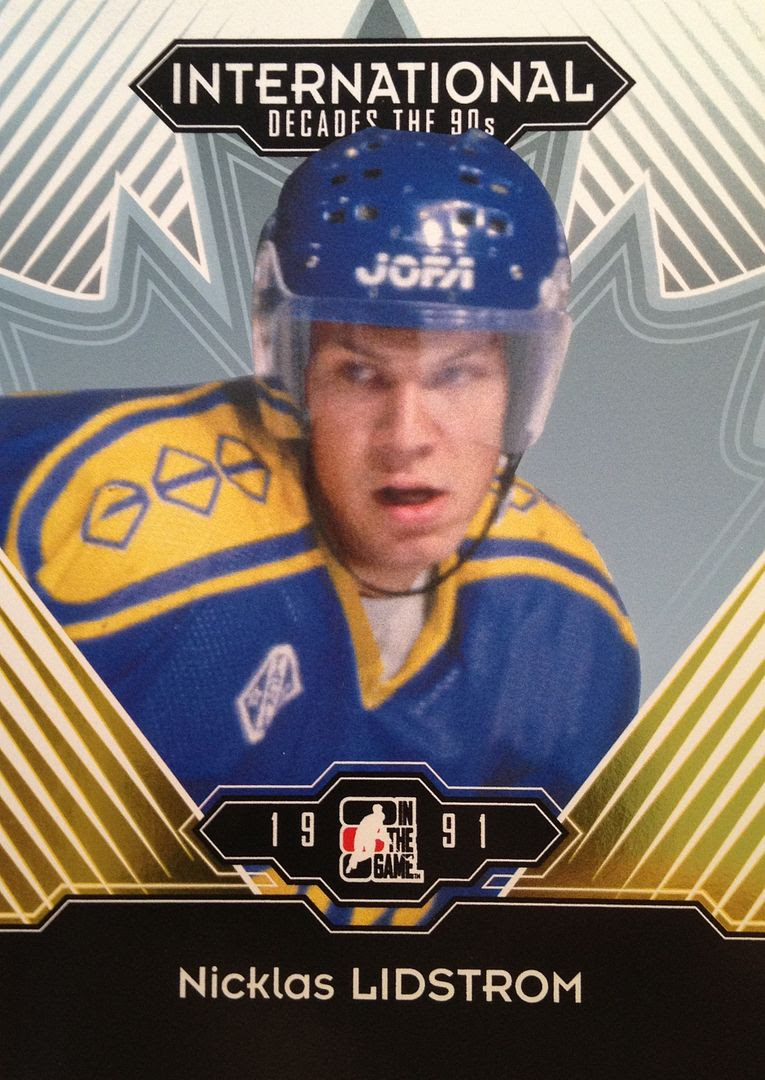 Base Card Design -
The Decades 90s base cards come on medium foilboard card stock. The foil that ITG uses is reflective of light, but doesn't have the rainbow refracting effect that other companies like to use. Perhaps it was a nod to the 90's, when foil cards were a bit simpler... but then... Topps had their refractor cards already... so I guess that theory goes out the window! But these cards do have that 90's sort of look. The patterns and graphics employed do scream 'third-rate' 90's cards. For me, if this design was intended to be a bit cheeky, then I think this set wins. It's definitely throwing out a stereotypical 90's look. If it's supposed to be an elegantly designed 90's throwback, it misses the mark. I'm just going to assume that ITG was going for something more fun and cheeky... so in that case, it works! A funny design that pokes a little fun at how some used to make things look 20 years ago (WOW, can you believe the 90's were 20 years ago?!?!). The Lidstrom card above is from the International subset that makes up the first portion of the set. It looks just like all the other base cards save for the special International logo at the top and the year displayed above the player name. 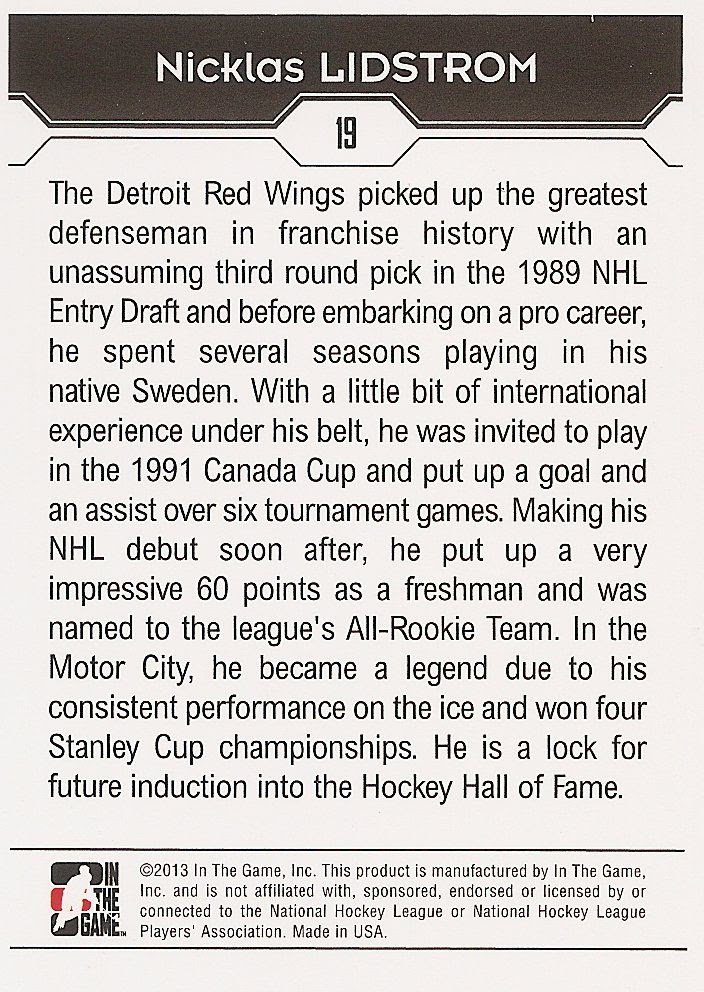 The International card backs do not include statistics, but rather a write up of the player featured. All the backs are black and white except for the ITG logo (which has a bit of red). As usual, ITG does a wonderful job of giving collectors a nice write-up, but with little else to fire up the senses in terms of design. Standard base cards have a bit of a smaller font, but includes a career statistics bar and the player's vital information.

Inserts/Game-Used/Autos -
Each pack/box of Decades the 90s comes with six hits. Collectors can look forward to getting three autographs and three game-used cards. The exciting thing with ITG is that all the memorabilia included should be game-used... none of that fuddy-duddy event-worn stuff! And autographs are on-card in this product! That's really awesome! Two non-hit insert cards round out the pack. 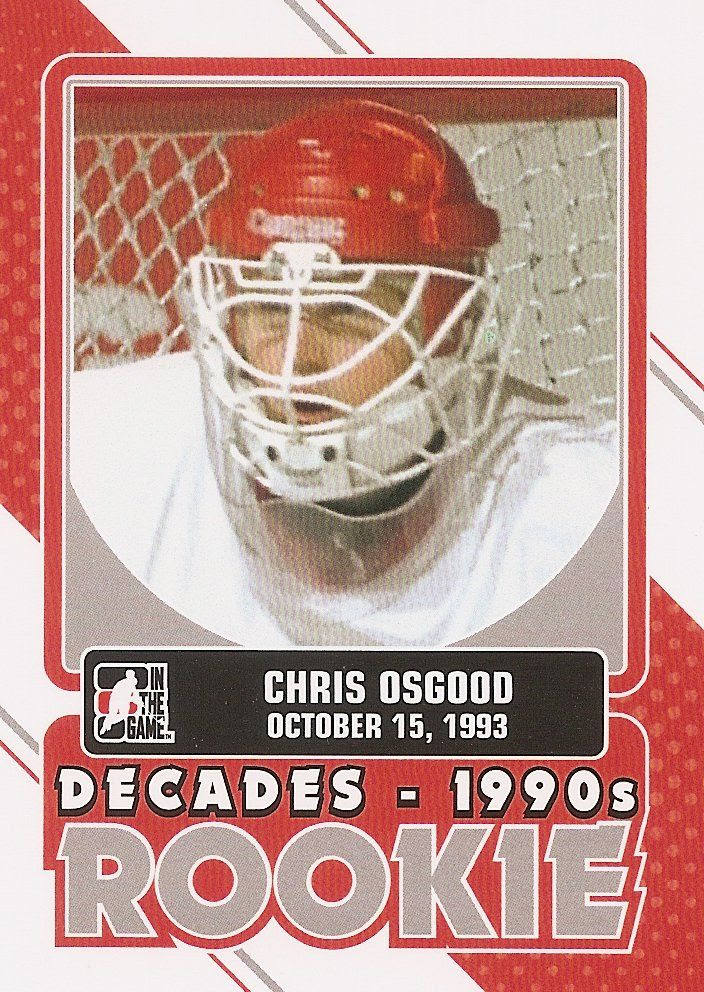 'Rookie' insert cards are non-hit inserts that celebrate players who had their rookie season in the 90's. Though the card have very little visual appeal to me, I do appreciate the game-date included on the front. The date is special in that it tells collectors the exact day that the player had his first NHL game. So for the card above, we can see that Chris Osgood made his first appearance on October 15, 1993. It's a small thing to add, but pretty significant I'd say. The back of the card goes into further detail about how Osgood came into the NHL and some tidbits on his games later that season. Great information on a card that could have looked much better. How about make a card that actually looks like it was designed in the 90's? Like a re-imagined rookie card. I'd like something like that! 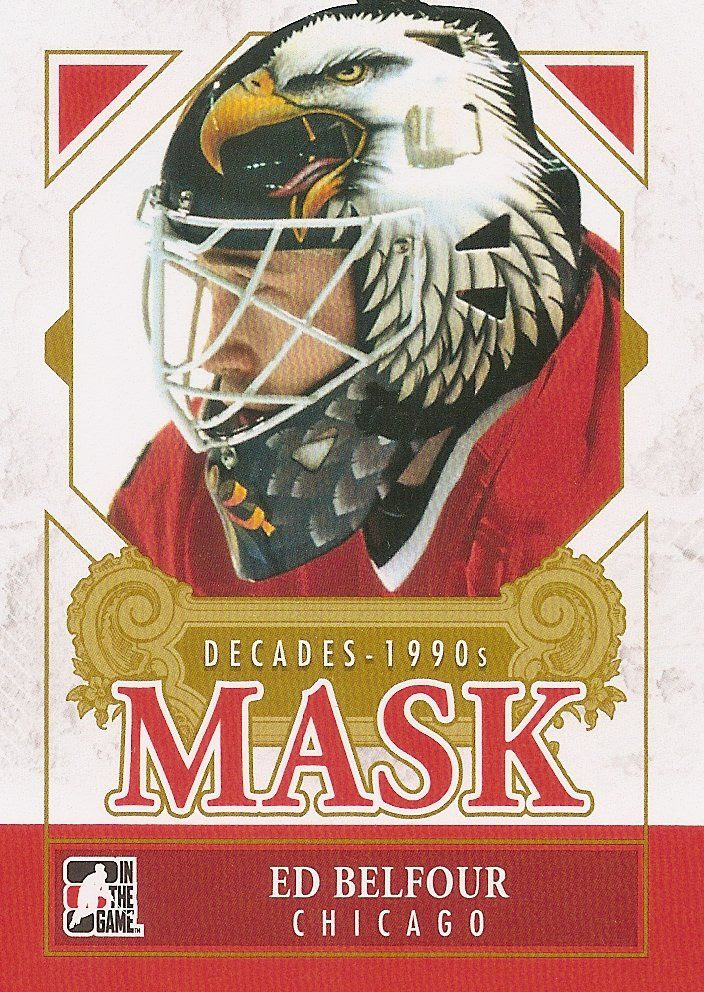 Mask themed cards have always been popular, but the cards that come out of Decades the 90s fall flat in terms of their design. Like the rookie inserts, these just come off uninspired with no fun, glam, or glitz to them. If these mask cards even came half as close to how their foil goalie inserts looked in Between the Pipes, I think ITG would have an insert set that goalie collectors would love. I could really do without these cards as there are much better choices out there for goalie mask cardboard. 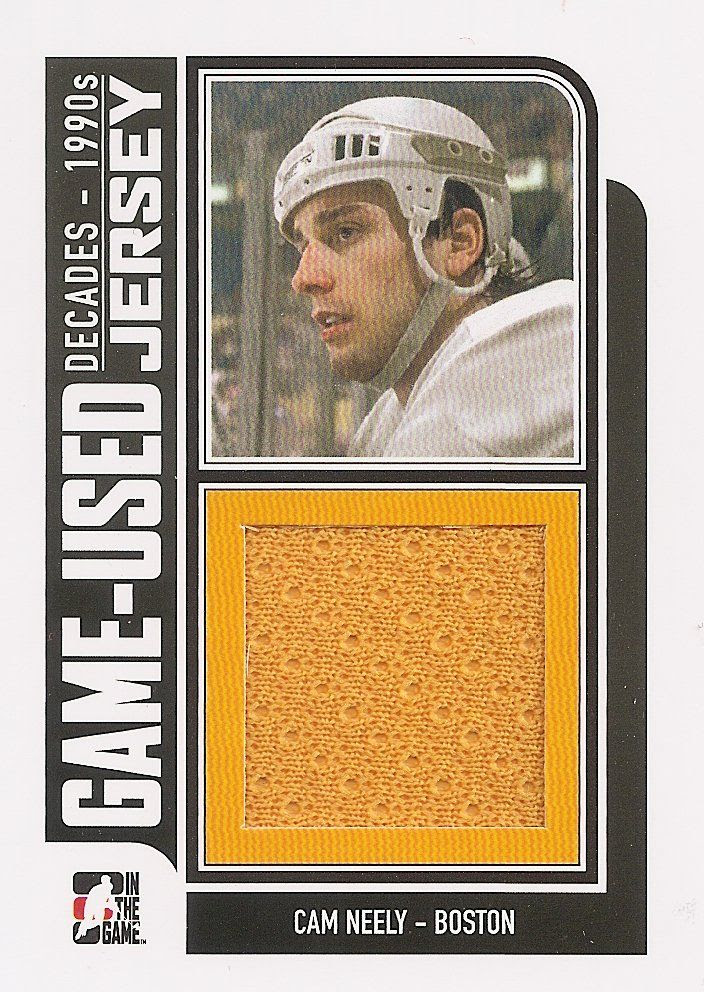 The standard jersey card from Decades the 90's comes on a very spartan, minimalistic card design. It's very simple... and it works well. I hesitate to call this a 90's style design, it actually feels more retro than 90's. But I won't complain too much as the card is well done. The 'borders' are so thick that I don't think you can say that this card has borders. It's more that the inner design is laying on a bed of white backing. The jersey size (relatively generous) matches the photo size and they stand one on top of another in the center of the card. Great design elements and choices. I have to say this is one of ITG's better looking standard jersey cards. 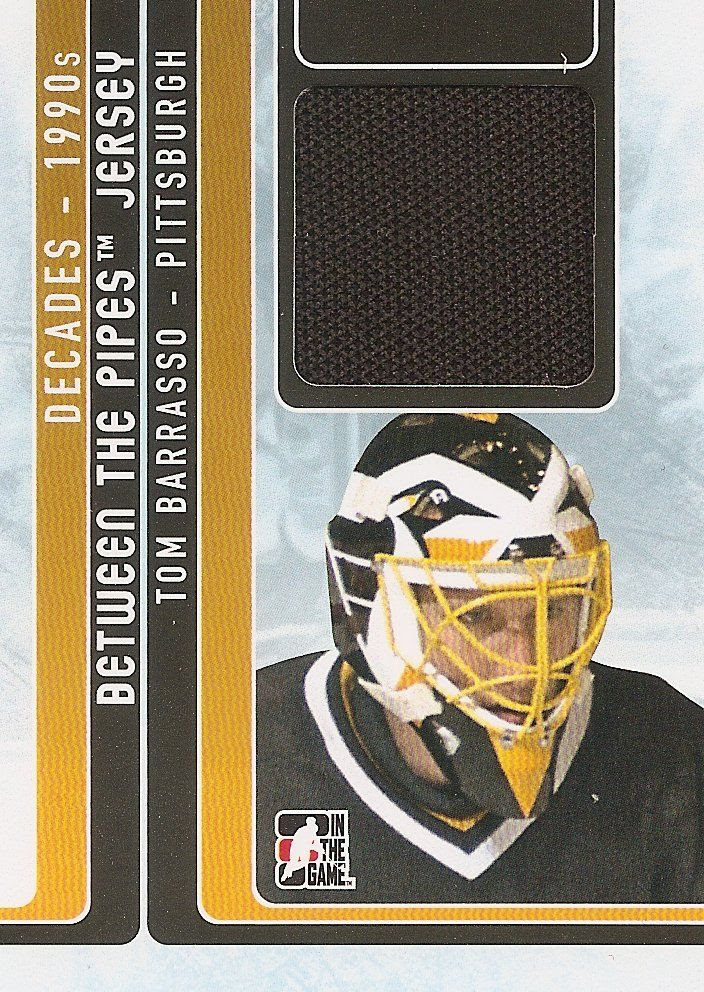 This Tom Barrasso jersey card is a part of the ITG Between the Pipes goalie line-up of cards. To me, the design is not as strong here as with the standard game-used jersey. I think it's the background that gets in the way of making this design stand out. If that blueish backing behind Barasso was gone and turned to white, this card (to me) would be so much better. It would mirror that standard jersey more closely and give these jerseys some continuity within the product. Aside from that, I am loving the fact that ITG boldly says that the piece of jersey included within the card is from a game-used Tom Barasso Pittsburgh Penguins jersey. Huge props for ITG being very specific and clear about what is on the card. 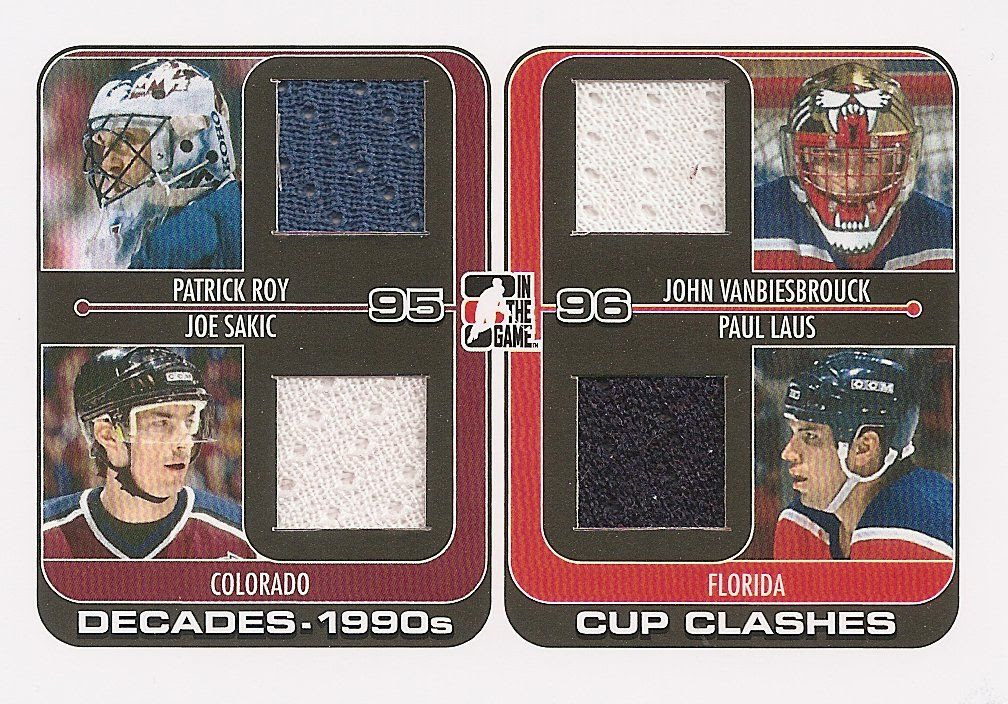 I'm typically not a huge fan of multi-swatch jersey cards, but the one I got today in my box of Decades the 90s was my favorite pull of the day. First off, the card features some great players... but secondly, the card has a very specific theme that makes it relevant. And the theme is stated clearly on the card! Thirdly, the card looks very good. I'm a huge fan of how this quad jersey is presented. The design is similar to the standard single jersey in many ways. And of course, the back states exactly where each swatch came from. Roy and Sakic from Avalanche jerseys, and Vanbiesbrouck and Laus both from Panthers jerseys. Collectors should find one quad memorabilia card per box. 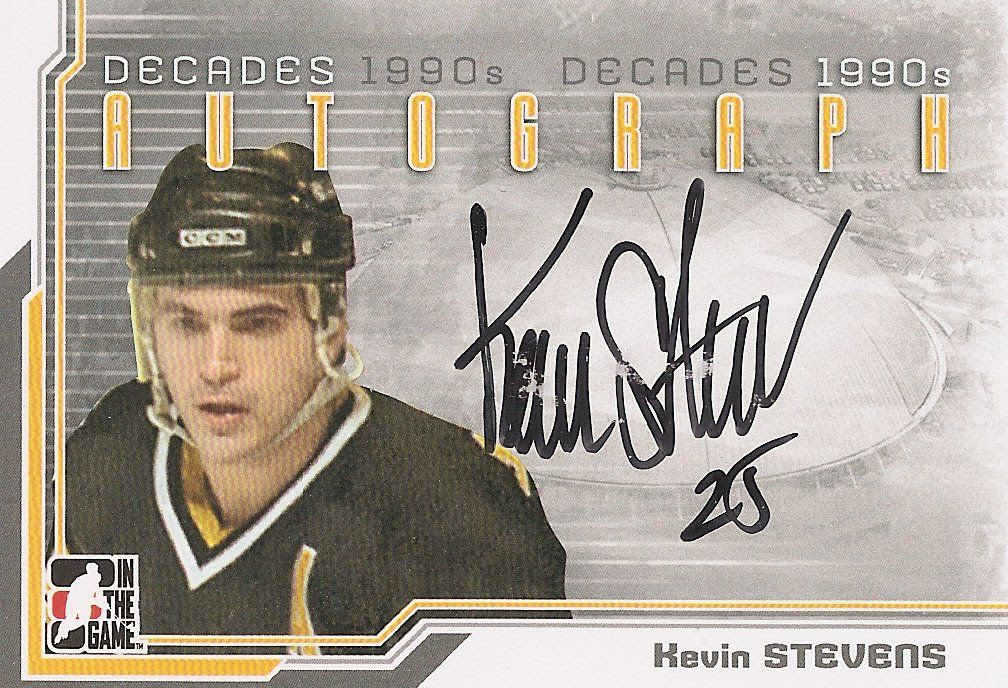 ITG has typically done sticker autographs on their cards. Though stickers were employed, ITG had always done a great job of fitting them into the design of the card. Well... that's not a problem they had to deal with here... the cards are hard signed! Collectors will love the fact that these cards are all on-card autographs. My only issue here (and I guess it's a big issue) was that two of my autographs came out a bit smudged. And the third was a little faded. That's really too bad as these could have been really awesome. I'm not sure if many of these cards came out like this. I hope not! It was disappointing in a major way to have these autos like this. 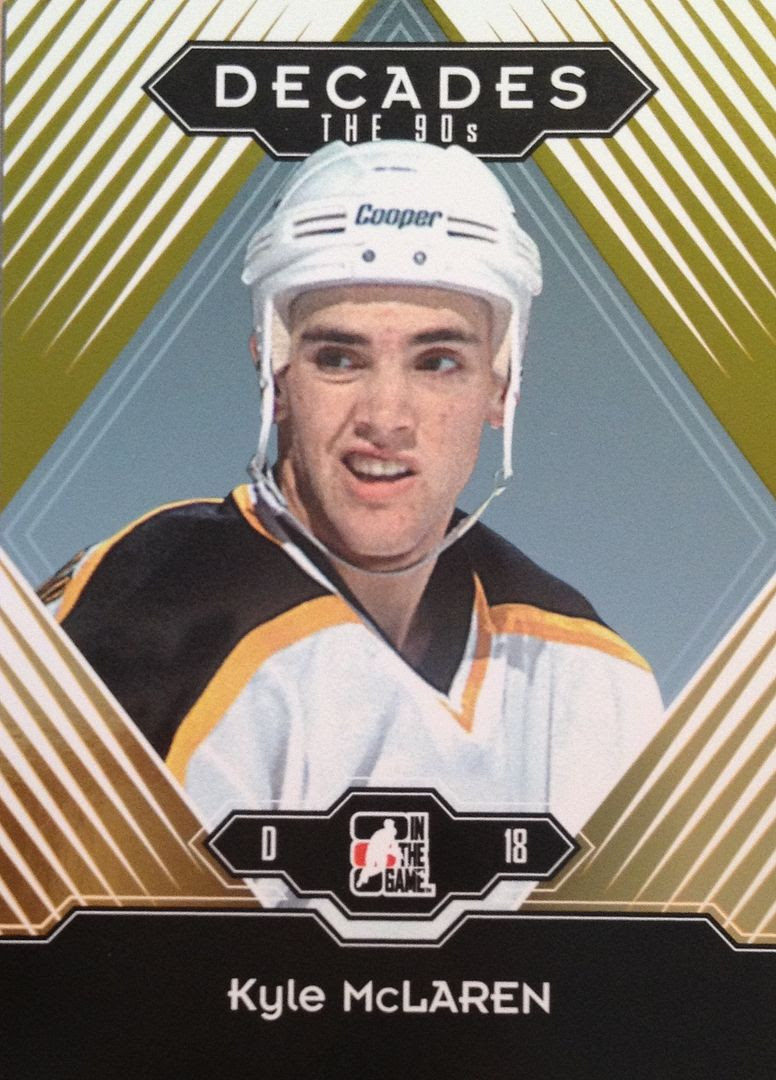 Decades the 90s has a parallel gold base set to compliment the standard set. The cards are limited to a print-run of thirty.

My box of Decades the 90s was probably the most typical, average box you could get. Luckier collectors will find short printed autographs, dual memorabilia cards, or crazy limited patches. I have yet to pull one of the huge patches from ITG - they are quite rare. I imagine it would be an awesome feeling to get one!

Overall Rating -
ITG has come out with a nice look back at the 1990's. For collectors who really enjoyed the players in the 90's, this is probably a good choice to buy. I'm not sure I can say the same for everyone else though. While there are many autographs to be found in this product, many are from players that people have most likely not heard of before if they didn't watch 90's hockey. And getting a star player can be rather difficult as the stars have been short-printed or even super short-printed.

At release, boxes are going for about $100. This amount for six hits is sounds pretty good... but for many boxes, the value and name recognition will not be there. So it's iffy in my opinion to go for Decades the 90s unless you really are a fan of the players that you can find here. ITG is further limited a bit by not having the best player ever in hockey available. Wouldn't it be nice to have Gretzky represented here in the 90's (and also in the 80's)? Without him, and some other choice players, the product does seem a bit diluted. Missing those key players is a tough blow to the product.

That being said, on-card autographs and guaranteed game-worn cards are to be had if you buy into this new ITG 90's themed release! If that sounds good to you... go for it! If not, you can definitely pass on this one.

Check out my break of ITG Decades the 90s from D&P Cards in Sacramento, Ca: