So after last week's horrible basketball re-pack break, I made the decision to make another big retail product order online. Yep, that box was that SOUR... it made me immediately want to avoid another one of those! I made the order and it came in earlier this week. With all orders over a certain amount, dacardworld.com allows customers to choose some free stuff. I chose to get twelve packs of 11/12 O-Pee-Chee retail. That seemed very appropriate! So today we're going to see what comes out of these free packs. 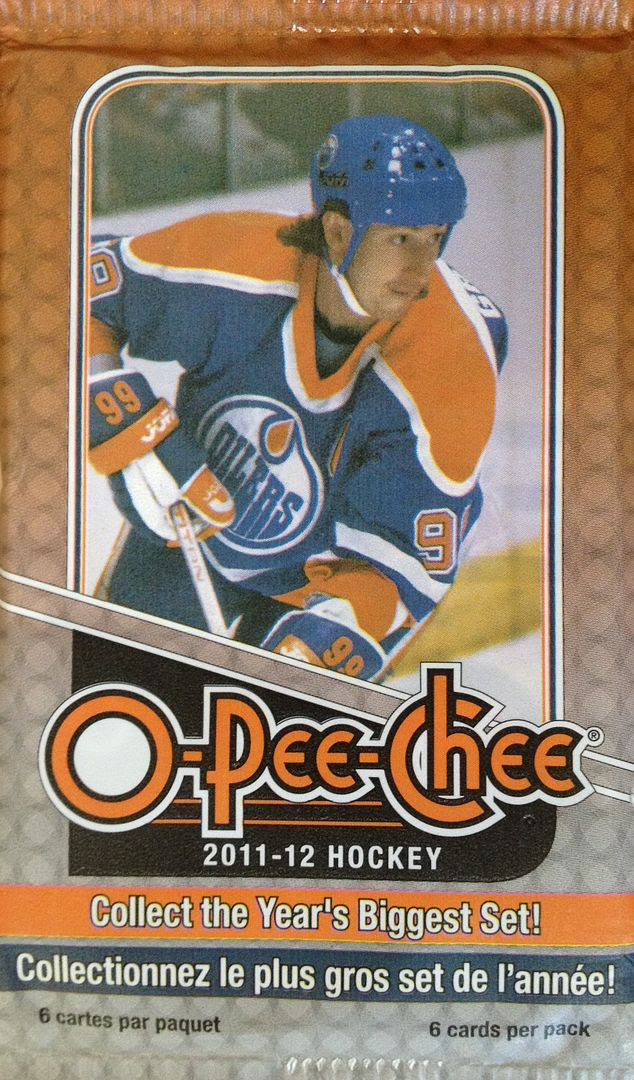 Twelve packs is about the amount of packs you get in a standard blaster box. With O-Pee-Chee it's actually fourteen... but who's counting? Hah, well, I guess I am... but these packs came free, so who am I to complain? It's always good to get a little bonus, and I'm happy to rip these packs open. Maybe there'll be some hidden gem of a card hiding within! The odds are against me, but you never know!

I can expect to find a variety of insert cards even if I don't get any hits. OPC is full of retro variants, rookies, and themed insert cards. I'll also probably see a good deal of players that I don't usually see in higher-end breaks as OPC is a fully inclusive set.

Review -
OK, so I guess there wasn't any spectacular card hidden away in these twelve packs. This break was actually pretty typical of OPC. The odds of finding a memorabilia or autograph card are pretty astronomical. I did, however, get a good amount of inserts like I thought I would.

What struck me as I opened up the packs were the lack of full first names on the retro cards. I had forgotten that the retros that year excluded the first names of the players! The front and the back only give the first initial of their first name. With so many lesser known players included in OPC, it could be tough for some to figure out who exactly they got. 'J. Levasseur' was one that I didn't know. I had to google him to find out his first name was Jean-Philippe. I also had trouble with 'F. Kuba' and 'J. Blake'. Those would be Filip Kuba and Jason Blake.

My Marquee Rookie and Legend mix was a bit skewed towards to legends. I had four legends to only two rookies. The rookies and legends share a very similar design, but I've got to say that the rookie cards look my better in my eyes than the legend cards. Maybe it's the color scheme, the dull gold borders on the legends lack pop. That being said, legend players are always fun to pull. You know they have made an impact on the game. Who knows how long the two rookies I got will last in the NHL!

One insert card that came in the packs was a a Kris Versteeg Playoff Beard parallel. I'm sure collectors who don't know about these will simply skip over these cards as they look almost identical to the standard base cards. The only way to tell these apart is by first looking at the picture and seeing the player with a beard... and second, by comparing the bottom border of the card to another base card. The Playoff Beard variations are a bit lighter colored. If you miss them, don't worry too much. They are not super short printed like blank backs, so they don't command much of a premium.

Let's see the top three cards from these packs: 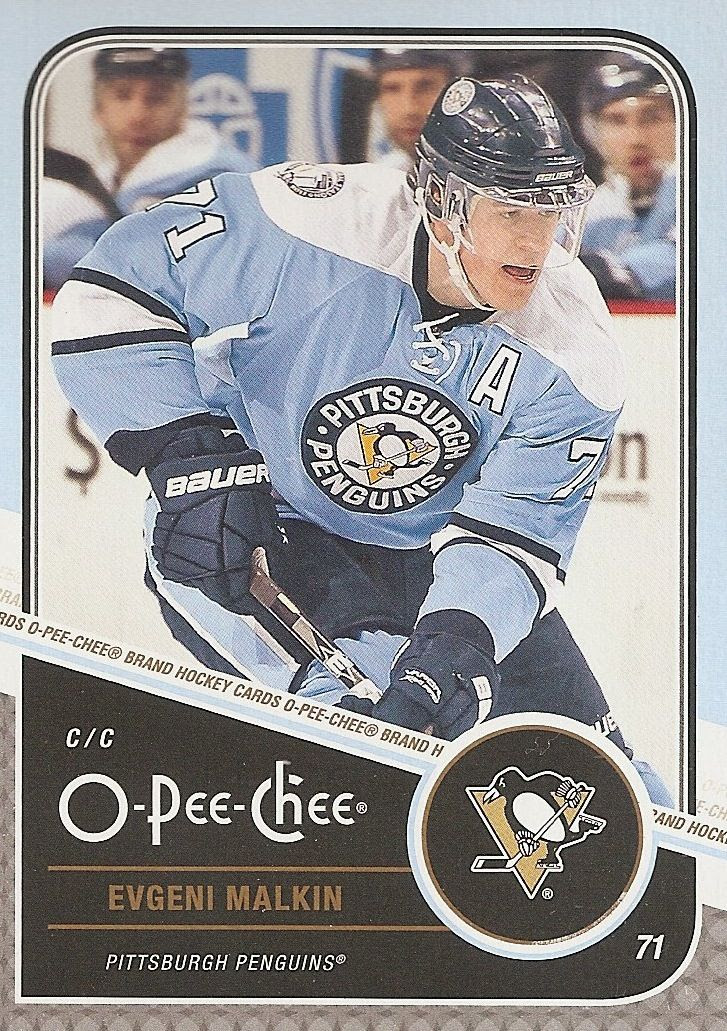 #3 - Evgeni Malkin Card No. 157
I am actually a pretty big fan of the look of these base cards. The light powder blue border is very soft and pleasing to the eye. This Malkin is especially nice as the cropping of his photo gives collectors an appreciation of his size. Also nice is that his alternate jersey and the borders are in harmony with each other - a perfect fit! 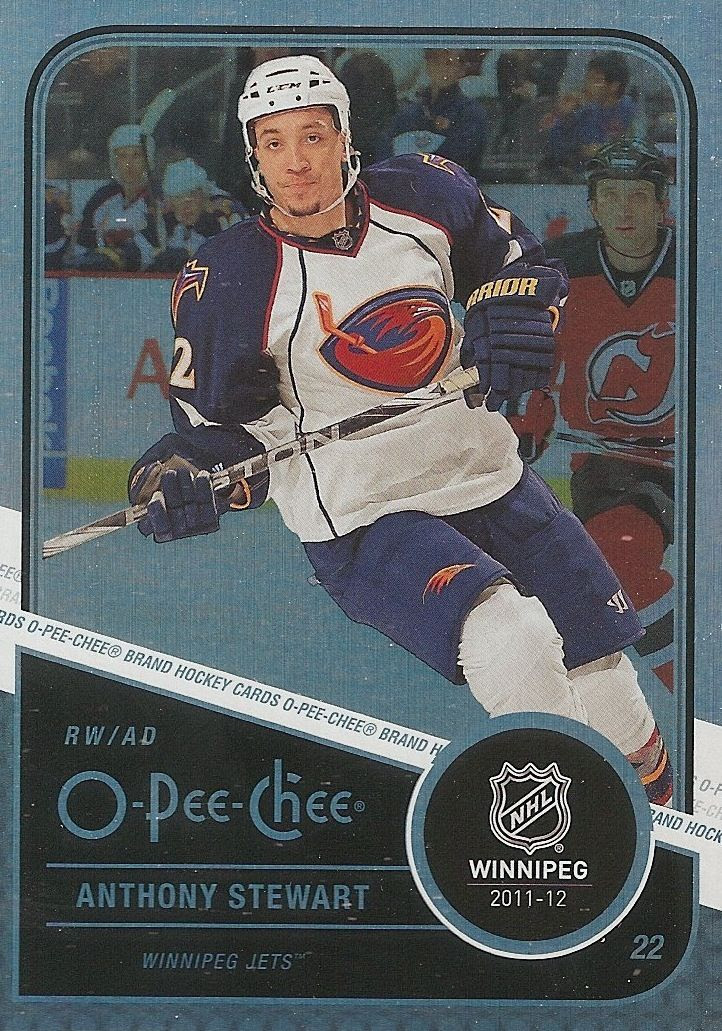 #2 - Anthony Stewart Card No. 254
This card stood out to me in a few ways. First, it's a shiny foil card - the only of its kind to come out today. Second, the card pictures a former Atlanta Thrashers player. The Thrashers moved to Winnipeg a few years ago, leaving Atlanta without a hockey team. Not too many people miss the Thrashers, but it's fun to see that team's uniform once in a while. Third, it's interesting to note that there is no official Jets logo on this card. It had not yet been approved when the card was produced. 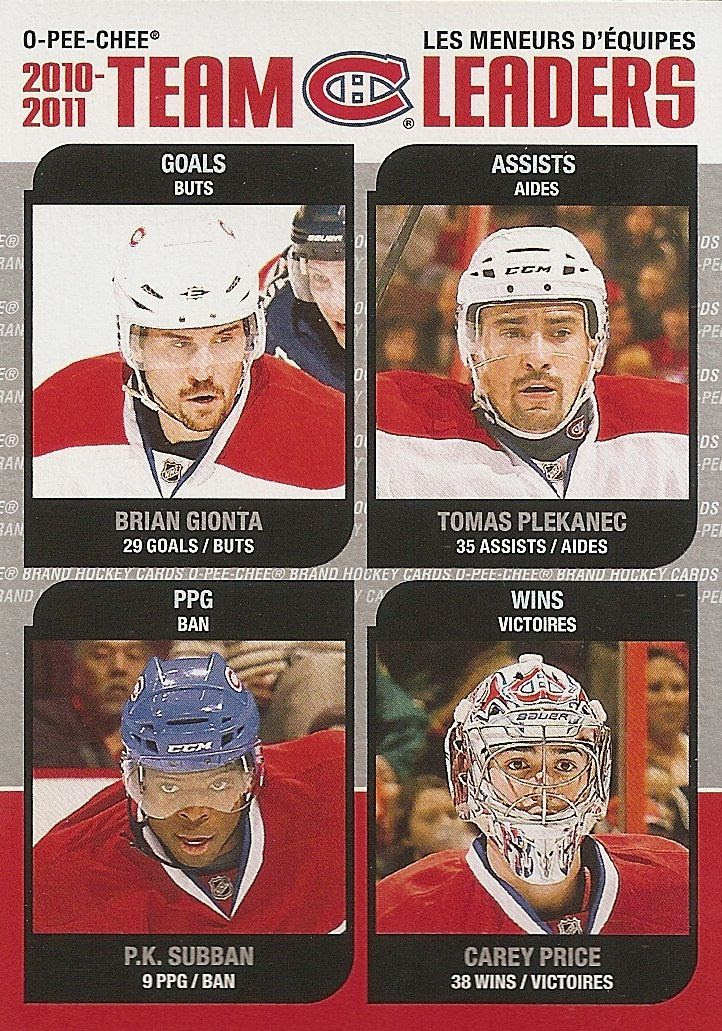 #1 - Montreal Team Leaders Card No. TL-16
When a Team Leaders card makes the top spot, you know the break was a bit on the weaker side! This card is pretty nice though as it features some popular Habs players. I particularly like PK Subban. He's a very polarizing player to many in the NHL, but I'm a fan. Besides the players, this card stands out with it's design and color. The red and whites really make this card jump out.

Overall Value -
Since these were free cards, I have nothing to complain about. If I had spent money on these packs, I'd probably be a little disappointed. Not a whole lot came out of these packs, but that's to be expected with OPC. Still, it was a fun little break this morning. I'm looking forward to next week as I will be back to breaking blaster boxes.