This edition of Retail Review will feature another re-pack product from Target. I had a good amount of fun with last week's cheap hockey re-pack, and I'm hoping to get more fun today. I didn't want to repeat the same hockey re-pack box, so I went for a LeBron James Nothing But Net Collection box. I've been trying to add more basketball into The Cardboard Review recently so I thought this would be nice to try. I also got a Score rack pack to keep the hockey interest alive as well. 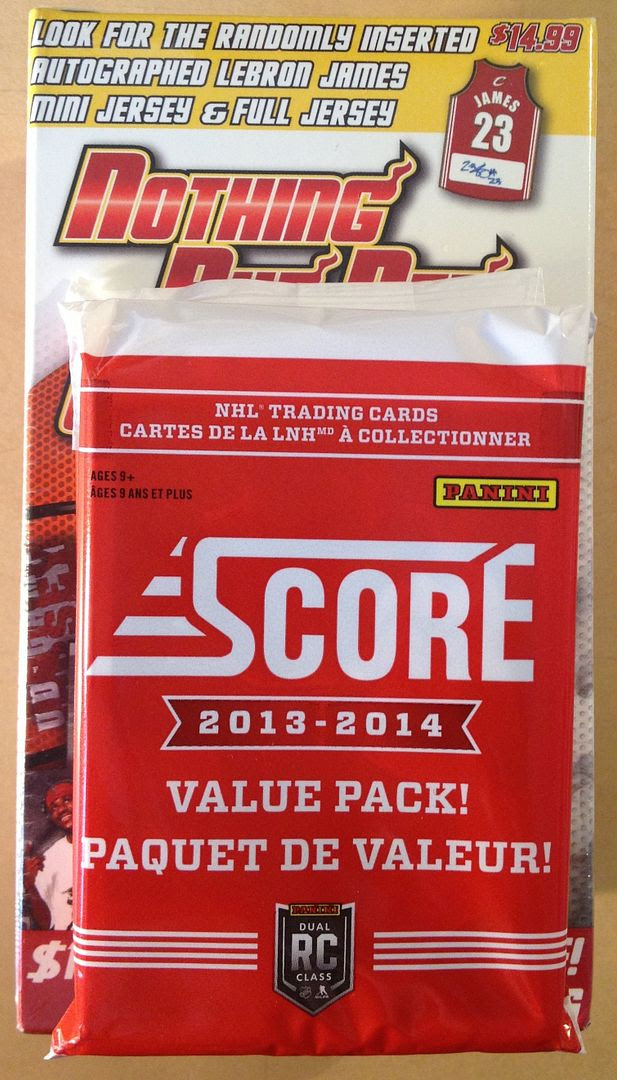 The LeBron James re-pack box is an intriguing item. The front of the box shows some nice LeBron cards that any basketball collector would love to have. Obviously, these LeBron hits should not be expected inside every re-pack box. In fact, they are probably very difficult to get. That being said, the box has a very solid weight to it - it feels heavy in the hands, which is a good sign that there are going to be a good amount of packs to rip. The box also guarantees $15 worth of LeBron James' cards. The box specifically prints 'catalog value'. Do they mean Beckett? I'm not sure where they get their value source, but if they're using a pricing guide, you know their estimated values will most likely be over the real sale prices.

The Score rack pack was a must-buy for me just to keep things going with hockey for all the hockey fans out there! These rack packs are pretty fun to open up. As most of you know, red parallel cards are exclusively available in them. Score has been a very popular brand so far this early hockey season, and I rarely regret buying it even though it's on the lower-end.

Alright, let's see what comes in out today:

Review -
All I can say is that the LeBron re-pack was a tremendous disappointment. Ugh! Last week's $7.99 hockey re-pack was way better than this collection of junk wax. I'll start with the $15 catalog value of LeBron James cards. These cards must have come out of a dedicated LeBron James set from years ago. I'm not familiar with basketball, but I can tell these cards are low-interest... and a lazy inclusion by the company that made this re-pack box. I don't think these cards have a $15 value at all. I don't even think I could ask $5 for them. Ha! If you want them for $5 + shipping I'll be glad to send them your way. No takers? Not shocking.

As for the packs... six of them were from before 1991! I would expect that in a LeBron James re-pack, I would be getting packs that had the possibility of pulling him out. The Fleer and Skybox packs that I got certainly brought me back to my early days of collecting... but they were truly junk wax. These are cards you can get entire sets of for $5 each. Maybe if I had gotten a Jordan base I might have been a little happy. That didn't happen.

The other packs were more modern in nature. The most interesting pack was the Jordan/LeBron bonus. I looked at the back of it, and there was a possibility of getting a 1/1 or jersey cards. But I'm sure if there was any sort of memorabilia hit, it would have been searched out long ago.

I'm just going to forget about this basketball re-pack; just clear my mind of the entire thing.

The Score rack pack is all I'm going to focus on as that re-pack left a super sour taste in my mouth.

All the top three cards this week come from Score: 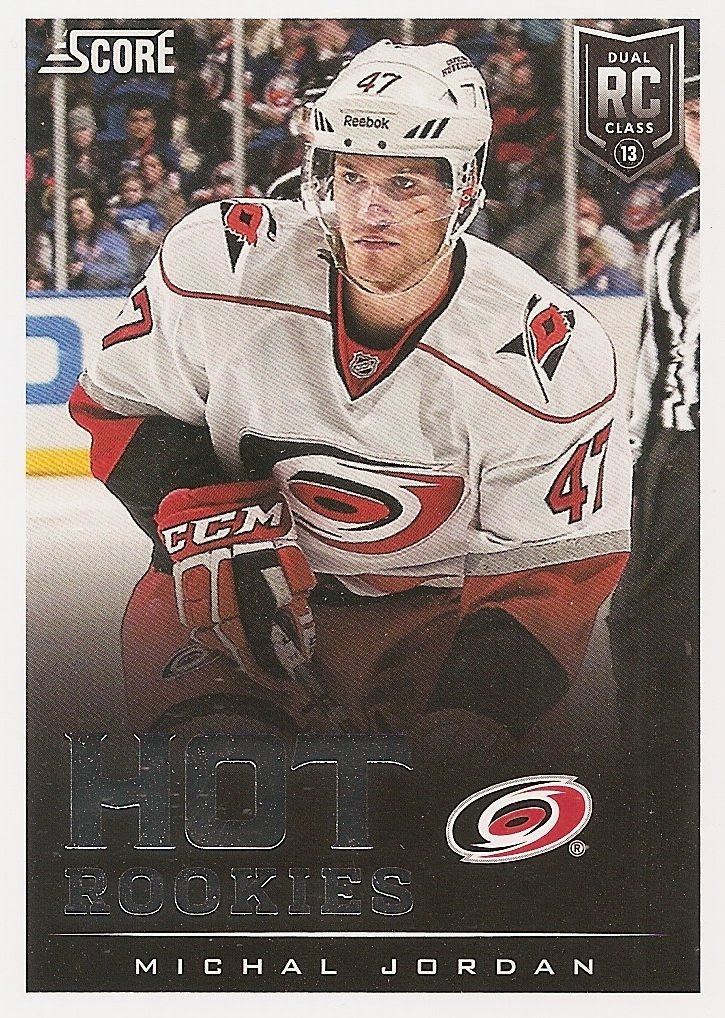 #3 - Michal Jordan Card No. 600
Pulling a Michael Jordan rookie card while breaking basketball products would be pretty cool, eh? Well, I did get a Jordan rookie... Michal Jordan. I thought that was pretty funny. 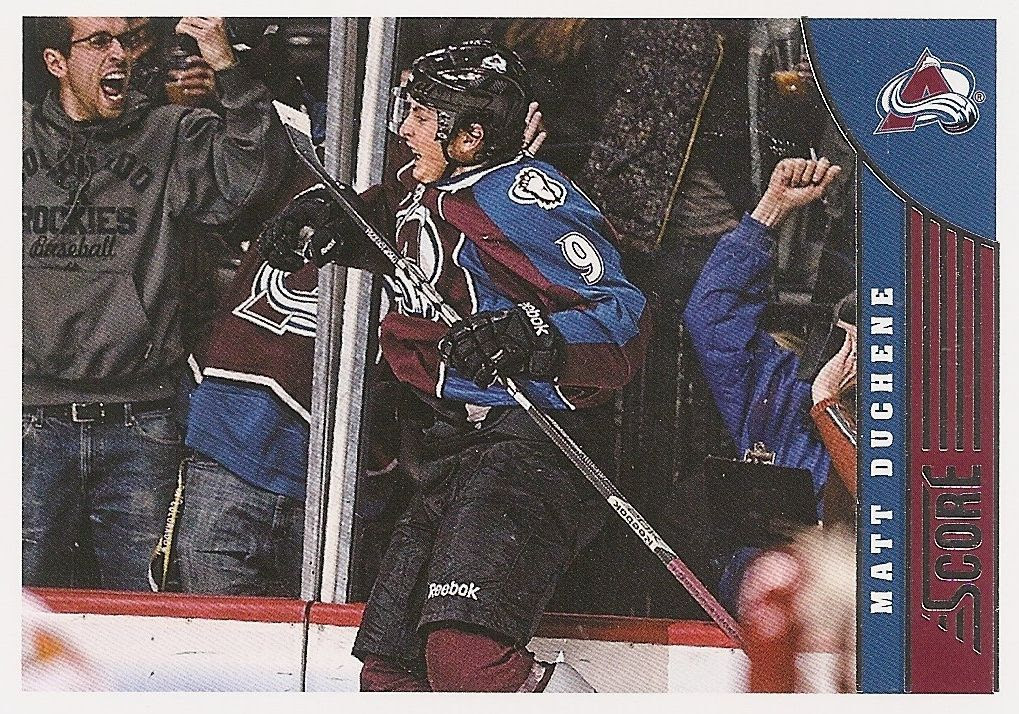 #2 - Matt Duchene Card No. 111
Yes, Matt Duchene is a very good hockey player, but I picked this card out because of it's unique photo. I love the unique perspective you get of Duchene in this picture. He's clearly doing the 'ol bump up onto the glass celebratory move. But not only that, the fan emotion is captured really well here too! 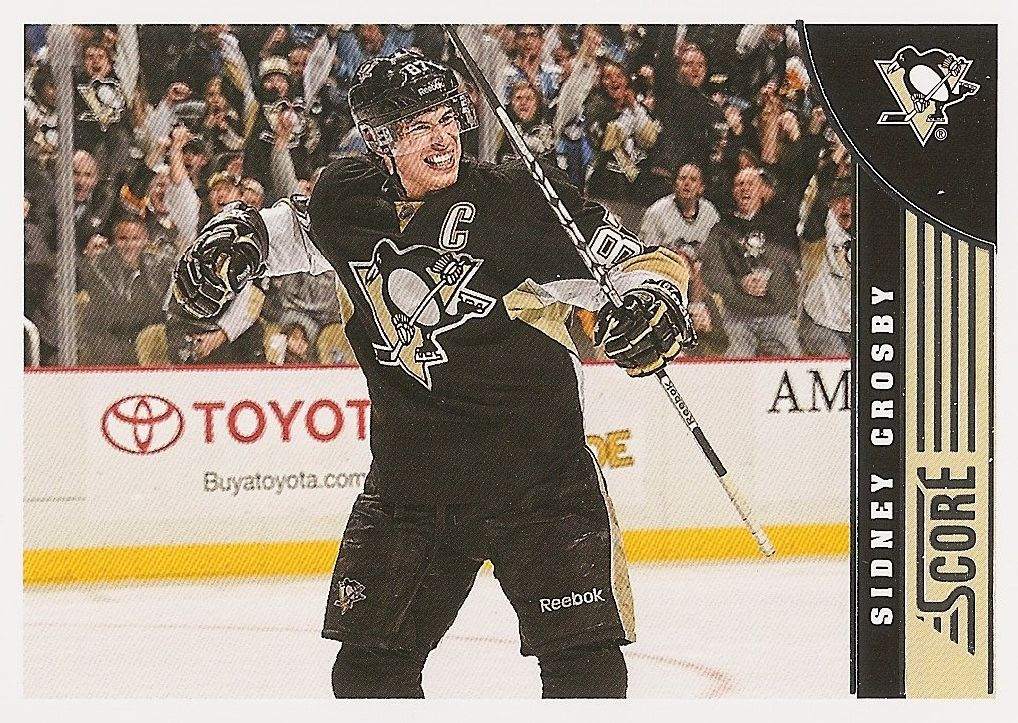 #1 - Sidney Crosby Card No. 399
Here's yet another examle of a great photograph that captures the emotion of the game. It's a sweet picture of Sid the Kid celebrating with the fans doing the same in the far background. Great shot!

Overall Value -
I would really just like to forget about the basketball cards I bought today, but I can't. I would probably give that box a 1 or 2 for the 'enjoyment' and 'value' it gave me. The Score rack pack didn't contain much to bring things up this week either... not a bad rack pack by any means, but definitely not great. The rack pack helps lift the score up just a tad. I certainly do not recommend getting the LeBron re-pack if you ever see it in the stores. Stay away!

Look for a new episode of Retail Review every Sunday!
Posted by luke. at 7:24 AM