Here's the final box of three Upper Deck Series 2 blasters that I bought. I started off very strong by pulling a Logan Couture Young Guns rookie card in my very first box. The second box wasn't so good... what could possibly come out of the third and final one? I'm not expecting too much, maybe there'll be a surprise! I think that the best I'm hoping for out of this blaster is a James Reimer Young Gun. Reimer was a rookie back in 09/10, and a pretty unknown one at that. After he got the starting job for the Leafs his cards took off in a huge way. I remember going to a card show in San Francisco a few months after he got really hot and finding a few Reimer rookies for under $5 each. The person selling them had them wasn't a hockey follower and had them in his bargain bin. That was a lucky score for me that day! So hopefully I have that same luck today with this blaster.

If not the Reimer, I'd also hope to pull some good Victory rookies... maybe some golds or a black? That would be outstanding to get a Victory black card out of a blaster.

Let's find out what comes out of this one:


Review -
Wow. This blaster was a big surprise for me. I didn't pull any of the cards I was hoping to pull, but this box still delivered in a big, surprising, way! My two Young Guns, Guillaume Desbiens and Mathieu Perrault, weren't that exciting, but many of the other cards delivered some punch.

Though they are not huge stars, the three Victory rookies that came out were at least notable. I got Tyler Bozak, Michael del Zotto, and Braden Holtby. Of the three, I think Holtby was the best of them. He has come up big for the Caps in the playoffs. Hopefully he gets more playing time in the future.

Patrick Kane also made an appearance in the form of a Playoff Performers insert card. He certainly earned the title on the card as he recently got his second Stanley Cup championship.

Here are the top three cards from this very good break: 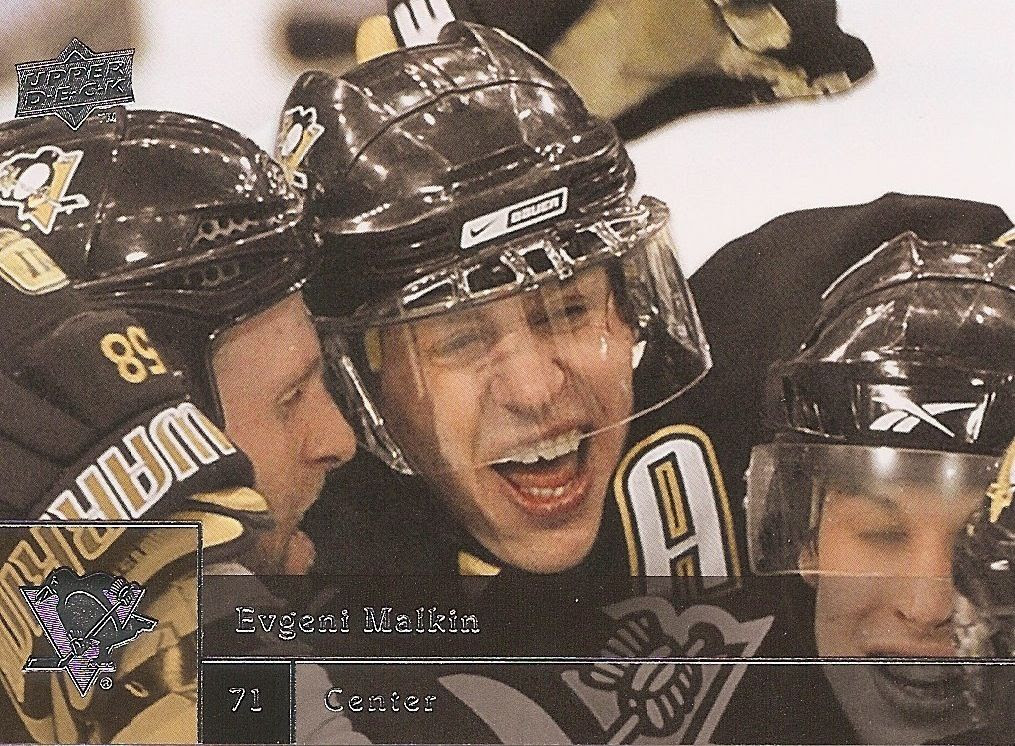 #3 - Evgeni Malkin Card No. 293
This base card isn't worth big bucks, but I had to choose it for it's amazing photography. I just love cards like this that capture the emotion of the game. It's so up-close! It's as if you're in the huddle sharing in the congratulations with the team. #2 - Sidney Crosby Card No. CC1
It's always good to pull a Crosby card. Crosby has definitely been the leader of the Pens for the last few years so he makes an obvious choice for this particular insert set. The card design on these could have been better, but Crosby's star power powers this card into the number two spot. 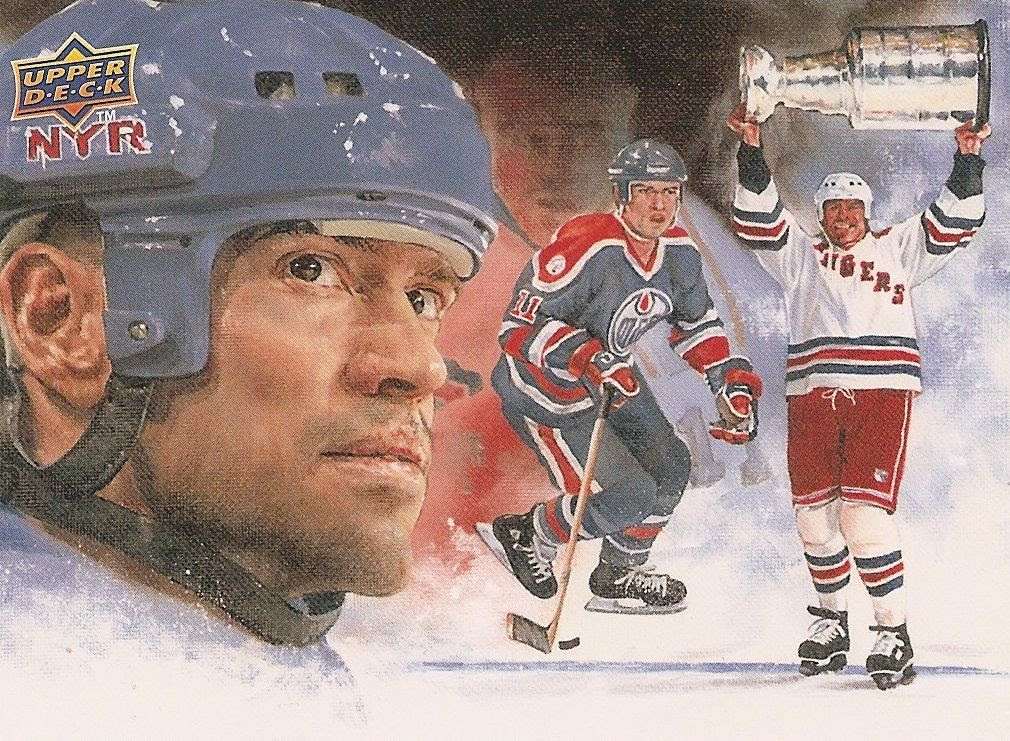 #1 - Mark Messier Card No. HH28
This is the second SSP art card I've pulled recently in Retail Review. These are not cards I think of getting when opening blasters... but I'm sure glad they come out! The art cards look so nice compared to the other Hockey Heroes cards. They should just do them all in art. I looked on eBay and as of this posting there was only one Messier art card for auction.... and it is being actively bid on. I'm sure it will draw a nice price. I am very happy with this pull!

Overall Value -
Well, I think you auto-win if you get a Hockey Heroes art card in a blaster. These are tough pulls that look great. But even with that there were other cards in the break that helped make it very good. The inserts and other rookie cards were solid. With a price under $10, this blaster was definitely worth the purchase. I checked the site that I got these from and saw that they are no longer listed for sale. That's really too bad! I'm glad I got them before they dried up though. Keep your eyes peeled for 2009 Upper Deck Series 2 stuff. It wasn't popular to start out with, but there are some good pulls to be had from it.

Look for a new episode of Retail Review every Sunday!
Posted by luke. at 7:14 AM