Fans of sports want to get the closest that they can to their favorite teams and players. Collecting sports cards is a great way to do that. Not only do cards provide great photographs and information about our favorite athletes, some cards even contain material worn by the athletes depicted on the front. But... why would you want a small little piece of material when you could get the full jersey? Why not just collect full jerseys or other parts of the game? This might be a silly question for most card collectors, but there is a segment of game-used collectors who do indeed pose this question. I'll try to answer it. 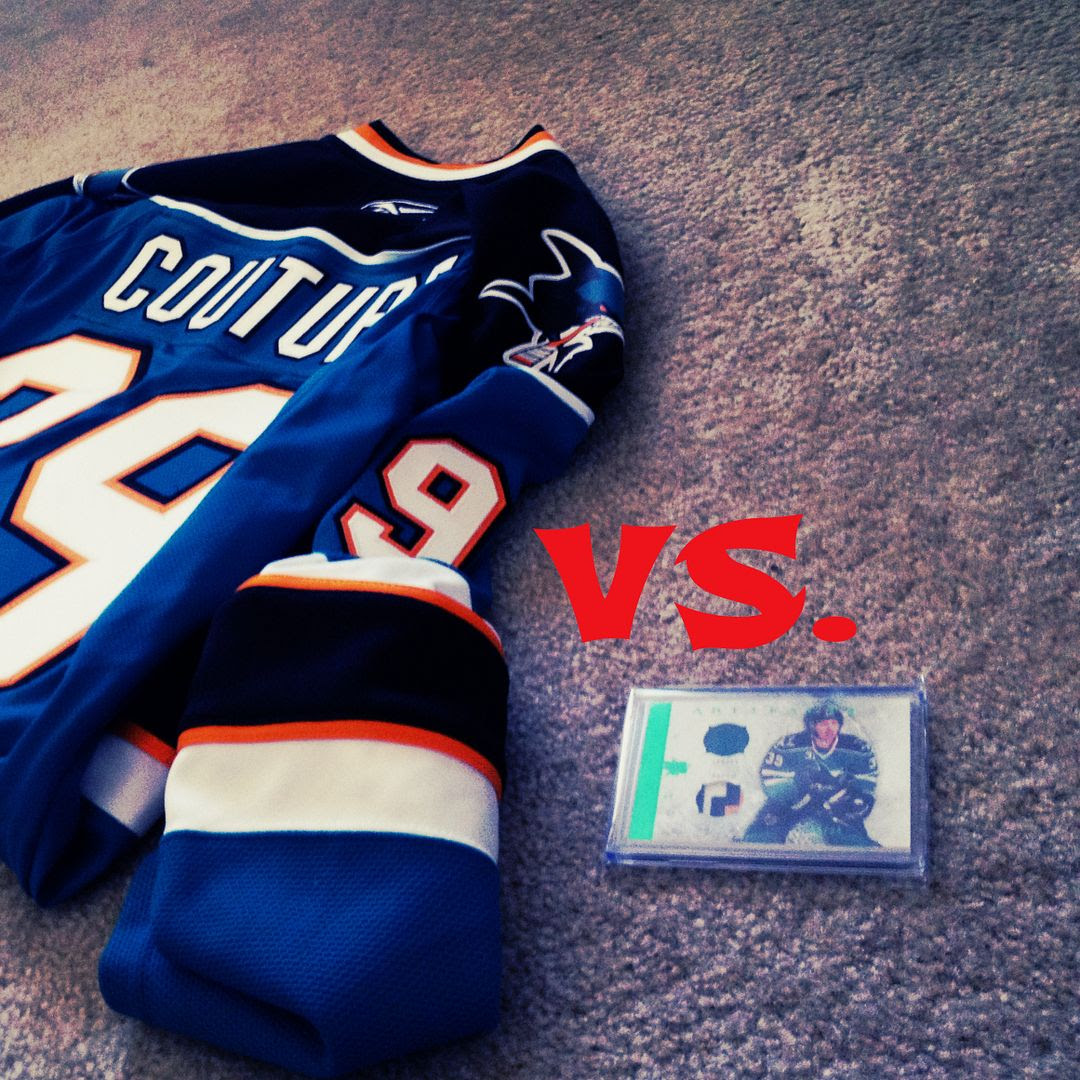 For those who collect actual game-used equipment like jerseys, gloves, skates, sticks, shoes, and balls... I have to say that is very cool. It's awesome to have these items as they represent the parts of the game in probably the most real way. They are actual relics of an event, a game, a moment in time. I would love to be able to own a few of these items... but to collect them like I would cards? There is no way! And it's not because they aren't awesome... and it's not even because of the money aspect (though that is a huge reason)... there are other compelling reasons to choose cards over full-sized game-used items.

I will talk about the financial aspect first though as it's the most obvious reason. Game-used items are expensive and generally not accessible easily. Each year the San Jose sharks have an used equipment sale. Many fans go to snag items... but these people are paying quite a bit for the equipment on sale there. For those who don't live near San Jose, it's even more difficult to obtain these types of things. Fans may have seek reputable online auction houses or official game-used dealers to purchase items. It's tough!

And when you actually have the item... what do you do with it? It'd be a shame to simply hide it away in a box, right? You'd have to display it... and displays don't grow on trees, if you get my drift. And as a collection grows, storage of equipment can become troublesome. You might as well make a locker room out of an extra room in your house! Collecting cards can get out of hand too... but storing cards just seems a bit simpler.

Then there's the community aspect of collecting. Game-used collectors are a passionate, but smaller bunch - much smaller than the card collecting community I'm sure. Perhaps there are game-used collectors who are close knit, but the cardboard community is always a place you can find many people of similar interest. And in this community there is quite a bit of talking and trading. The communal aspect of sharing breaks, helping other find cards to complete sets or add to a PC, and joining in on card discussion is pretty awesome.

I'm not saying that collecting game-used material is a bad thing. It's not... but I've seen some snobbery come out of the game-used collector camp. It can be a rather exclusive club, but in the long-run, and for most people, collecting cards is a great way to go. Let's celebrate both aspects of collecting our favorite sports!

Have you come across game-used collectors who look down on the card collecting community? If so, I'd love to hear your experiences with this! Tell me in the comments section below.

Side note: I can understand the frustration of game-used collectors who dislike the practice of cutting up older game-used jerseys. I can see where you're coming from!
Posted by luke. at 6:00 PM