How does one-hit-per pack sound? Panini Momentum gives football collectors one hit in every pack that they purchase. In box terms, that's ten hits per box; a pretty nice amount of hits for a price of around $170. This early season mid-high-end-ish product is loaded up with a variety of autographs and memorabilia. Football collectors looking to get in on some premium early season action can definitely look to Momentum to satisfy their needs. 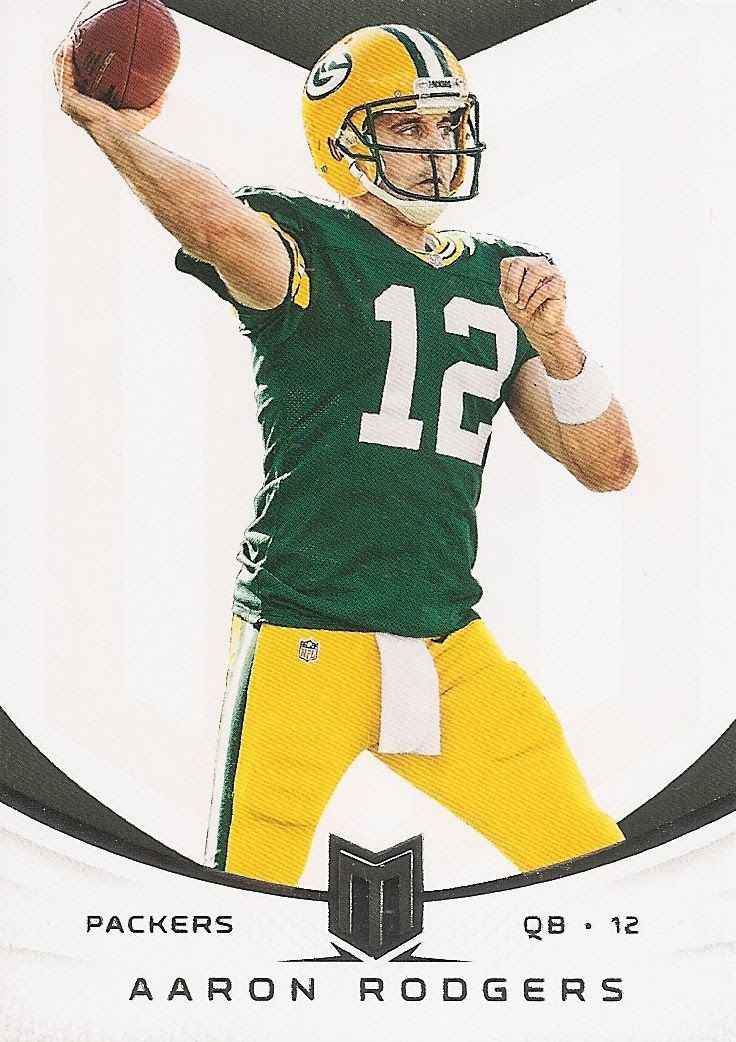 Base Card Design -
The Momentum packs are thick, and that's mostly due to the girth of the Momentum base card. The base cards hefty and have a strong, high-end feel to them. They carry a look that reminds me of Upper Deck's Ultimate Collection, but without all the frilly designs. Rather than go for something ornate, Panini has chosen to give a clean and simple look to these base cards. As with many Panini products of late, the primary color of the card is white. A full color cut-out of the featured player is prominently in the center of the card. Team colors dressed in silver foil round out the basic design of the card. Though I do like the this really clean modern card, it's not very memorable - there just isn't anything on the card that would help me to remember it ten years down the line. So all in all, very nice... but a bit lacking in the 'wow' department. One design element that does stick out positively is the glossy Momentum logo behind the player image. It looks pretty sweet, but it can get lost when just flipping through the cards. I guess it's just meant to be an accent, but I wish it stood out more. Maybe if it had been done with the rainbow foil treatment... but that's a judgement call. The designer of this card when for subtle, and I can respect that. 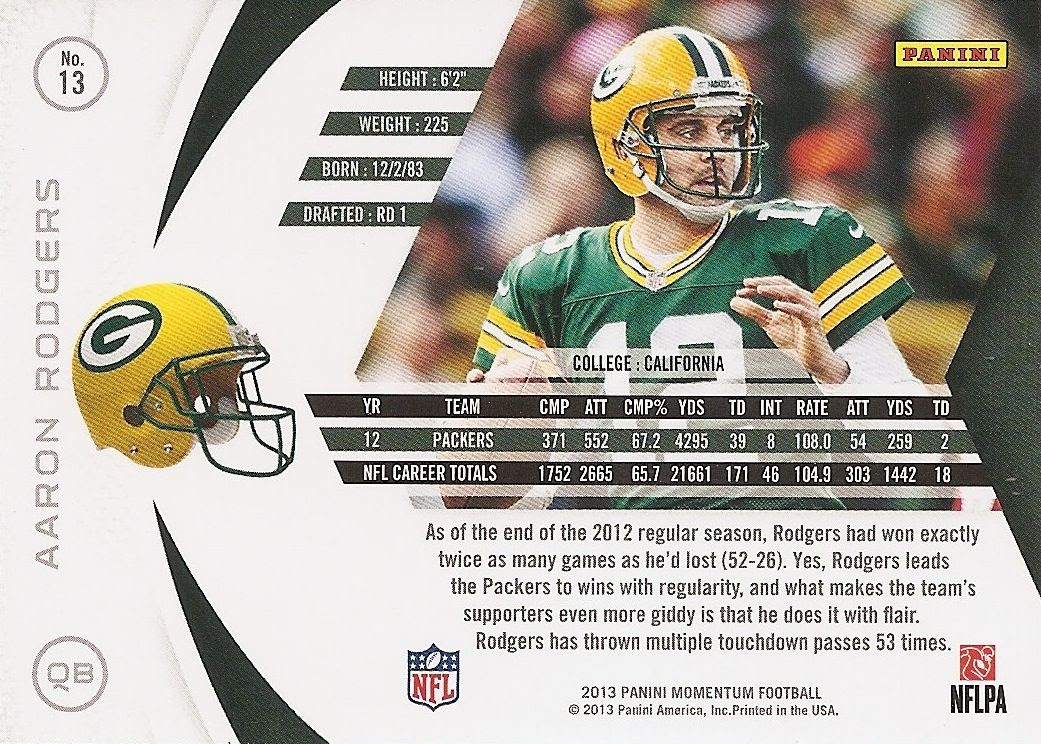 The back of the Momentum base card is done in a horizontal fashion. Normally I prefer the front and back orientations to match, but it's not a huge deal-breaker. The card backs actually are quite memorable for the fact that they have a different orientation than the front, and that a nice full-color close-up photograph is used. The photograph is actually quite dynamic in that it's not done in a traditional shape. The photograph (and write-up too) is skewed to fit the Momentum logo and geometric scheme. That's impressive design work for a trading card! 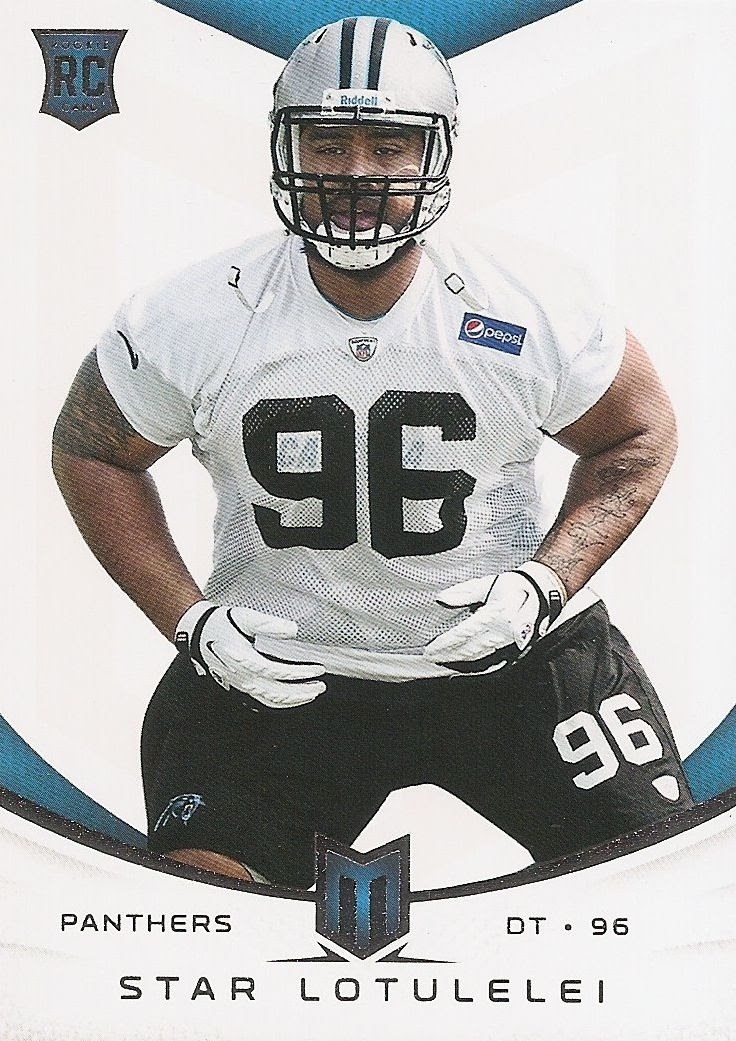 The standard base-set rookie cards located at the back-end of the set have not real design changes from the other base cards. They are identical except for the addition of a special rookie card logo in the upper left-corner of the card.

Inserts/Game-Used/Autos -
As I mentioned, each pack of Momentum will yield one hit - either an autograph or memorabilia card. I didn't notice it in my box when I opened it, but base parallel cards are available. My box had an Aldon Smith parallel numbered to /49. It looks the same as a base card, but with slightly different foiling and serial numbering on the back. 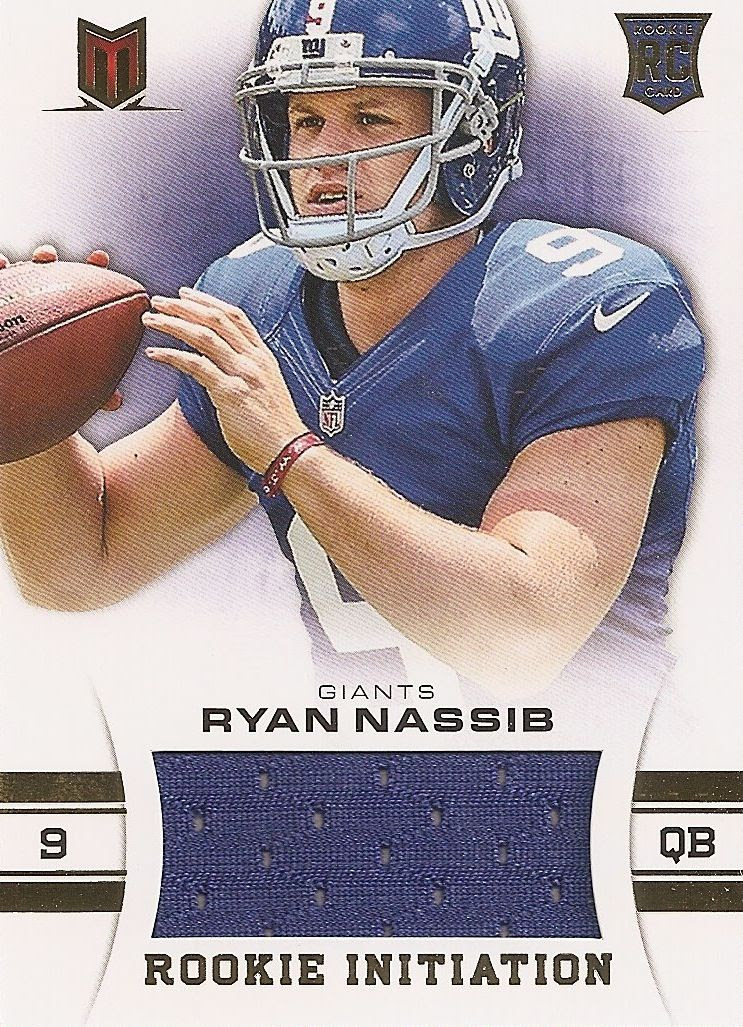 The most common hit type in the box was the Rookie Initiation cards. The Ryan Nassib shown above is an example of what these look like. The card has a decent sized piece of memorabilia below a large up-close photo of the player. These cards are nice pick-ups for collectors looking for some early season cloth of the players they want to collect, but probably won't command much of a premium price. Unless it was a big name, if I pulled one of these out of the only pack I bought, I might be a little disappointed. All-in-all, the design of these cards is above average. For a 'standard jersey' card, these look pretty good. The relatively hefty thickness of the card stock gives the card a more premium feel. Each card is numbered to /399, but prime versions of these can be found as well with numbering to just /49. 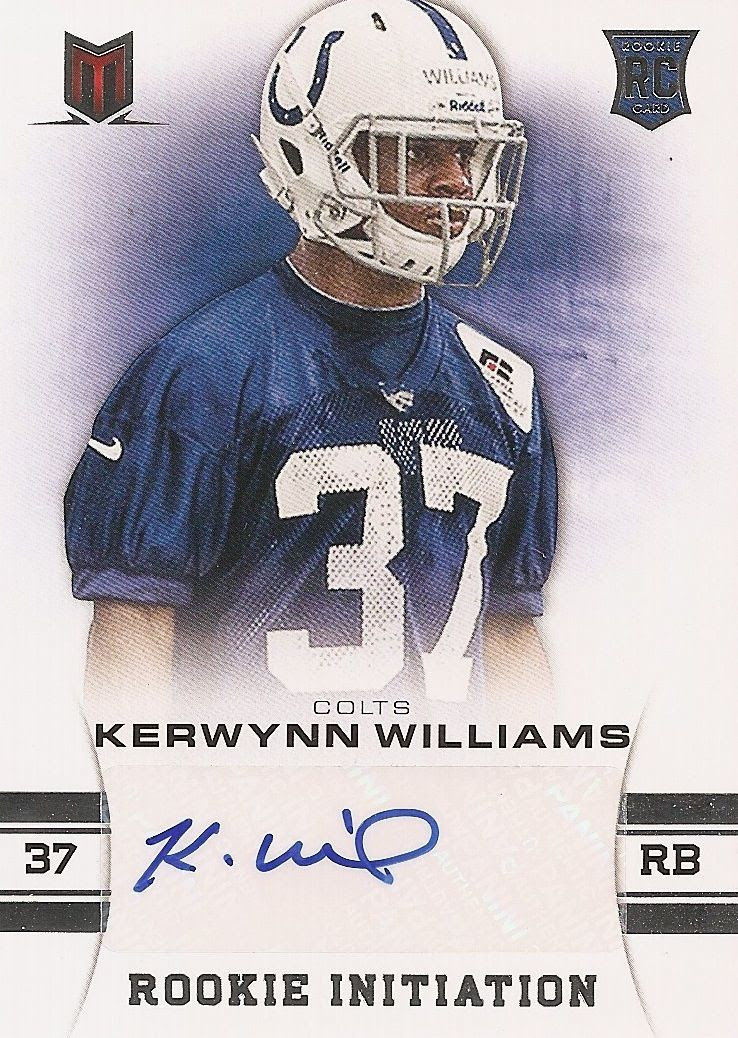 Replacing the memorabilia window and changing the foiling to silver gives us the autograph version of the Rookie Initiation insert cards. I like the silver foil on these cards. Silver and white go very well together. The autographs are on stickers, but they don't detract too much from the overall look of the card. I appreciate that there was space specifically left for the placement of the autograph. These cards are numbed to 299 or less. 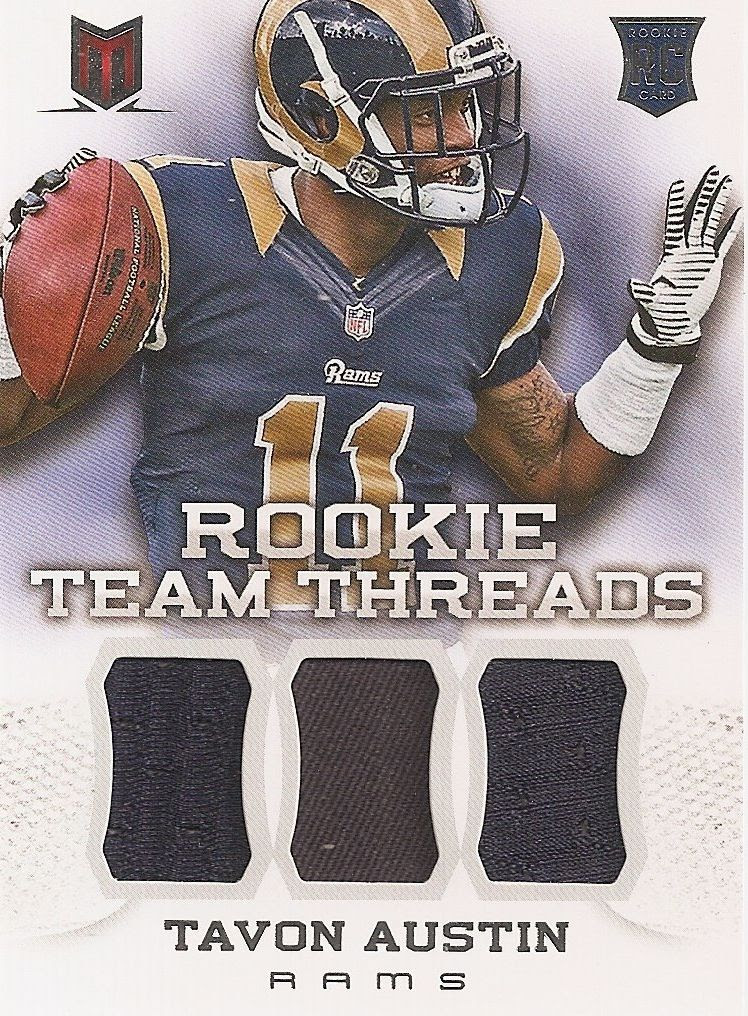 Many variations of the Team Threads and Rookie Team Threads memorabilia cards can be found in Momentum. As the name implies, these cards are all about memorabilia. This Tavon Austin card features three pieces of jersey, but there are other variations that have a different number of memorabilia. Some have patch pieces, and others will include an autograph. And each of the different variants will have different serial numbering. Good luck going for a player rainbow of these! 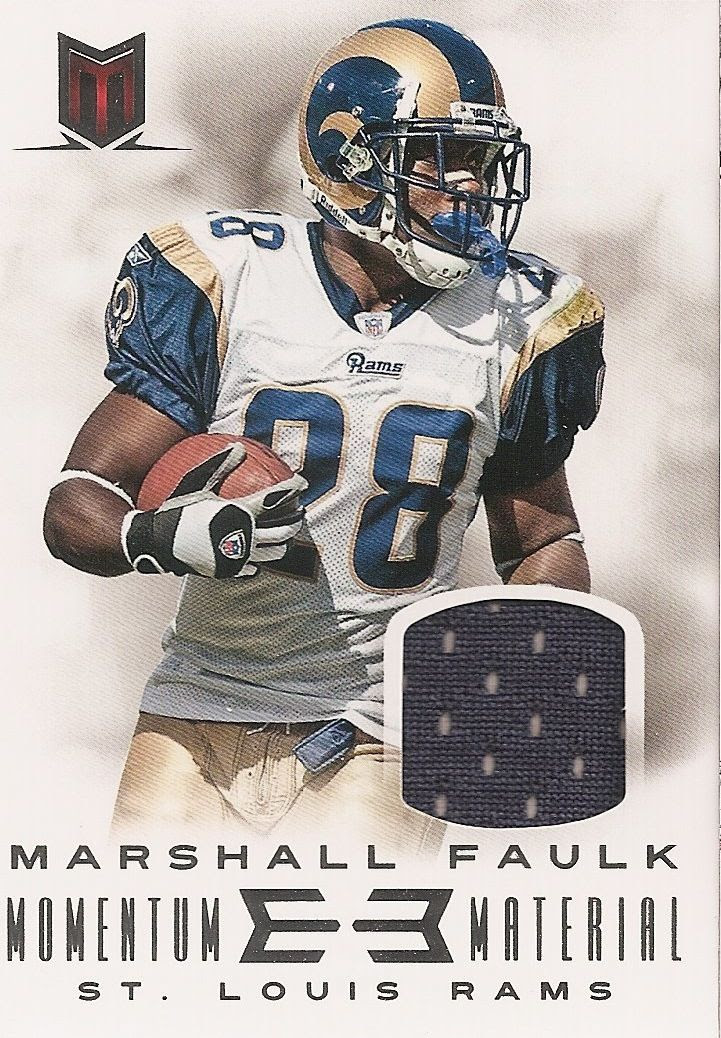 Momentum Material cards is another opportunity to find memorabilia pieces in Momentum. After getting all the rookie hits, seeing Marshall Faulk was pretty cool. The Faulk above is numbered to /199 and carries just a simple jersey piece. As with the Team Threads cards, these are also available in more limited prime variations. 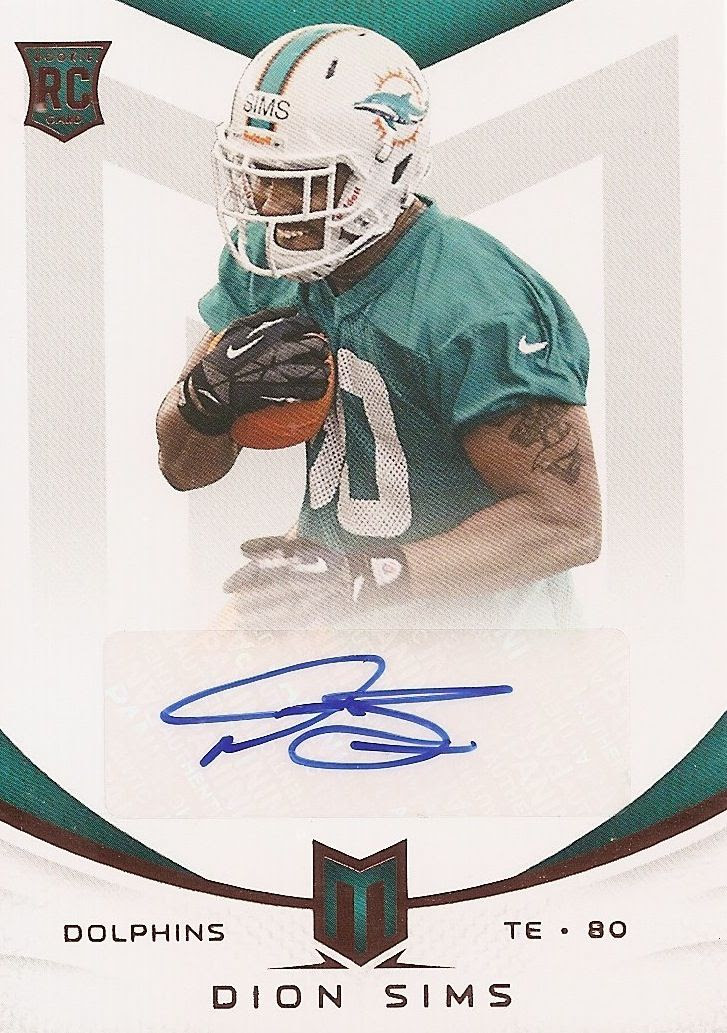 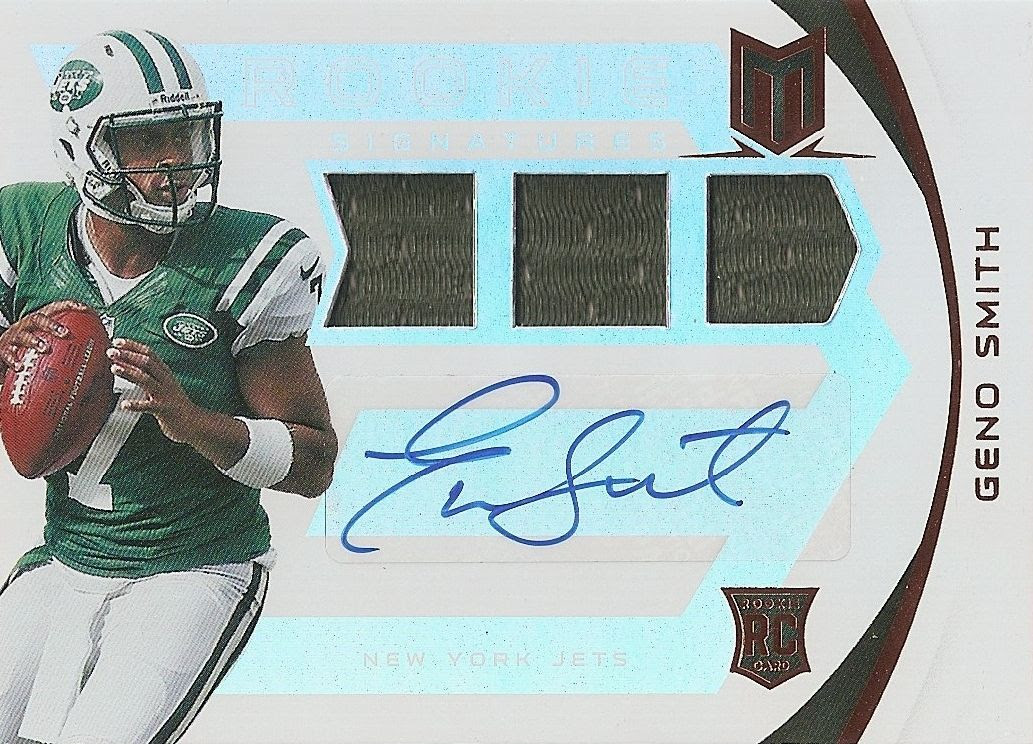 My best card of the break by far was this Geno Smith Rookie Signature RPS card. This card was easily the best looking and most valuable card in the box. In terms of the looks, this card really pops. The horizontal design and the layout of the jersey pieces is just about perfect. The rainbow foil Momentum logo gives the card a shine that stands out and makes you take notice. In fact, the entire card shimmers with a colorful rainbow effect. It's beautiful. This card could have been considered a part of the main set, but I just chose to include it in this section of my review because it seemed appropriate to pair it with the rookie auto parallel... and to end on a high note! Speaking of notes, it's noteworthy to say that NFL logo shield 1/1 variations of these cards can be found in Momentum. I always love the opportunity to pull a shield!

Momentum actually has quite a few more insert/hit sets. Some feature multiple player cards with multiple memorabilia pieces or autographs. Panini has definitely given collectors a good amount of variety to pull out of boxes. I would like to specifically mention the Studs set though. These cards look amazing and are limited to just /5 copies each. Each card comes with a genuine diamond imbedding in the card. I have heard that these diamonds are worth $100-$200 by themselves. Wow, I would love to get my hands on one of those!

Overall Rating -
Momentum is a very good set for collectors looking for a bit more in the early football season. So far, there hasn't been much in terms of higher-end products. Topps has Inception, but that set really doesn't have a veteran focus. With Momentum, collectors will get a healthy amount of rookie content, but also have some vets mixed in as well.

The cards in Momentum look good and are typical of current Panini design. The cards are clean and modern. These cards may not have a ton of 'wow' factor, but they are still pleasing to the eye.

For the price, Momentum is a very good deal. Ten hits for well under $200 beats many products in its hits to price ratio.

I definitely recommend Momentum to football collectors. The variety is there. The look is there. It's the right price! Go and grab a pack or a box and see what comes out for you!


Check out my box of 2013 Panini Momentum Football: