Collectors who enjoy basketball cards and autographs get a highly concentrated dose of both in 12/13 Panini Signatures Basketball. Each four card box gives collectors three autographs and a very limited 'base/insert' card. As usual with all 12/13 Panini basketball products, a Kobe pack will also be found within. Boxes of this product can be had for about $100. Let's take a close look at what you get in this new product. 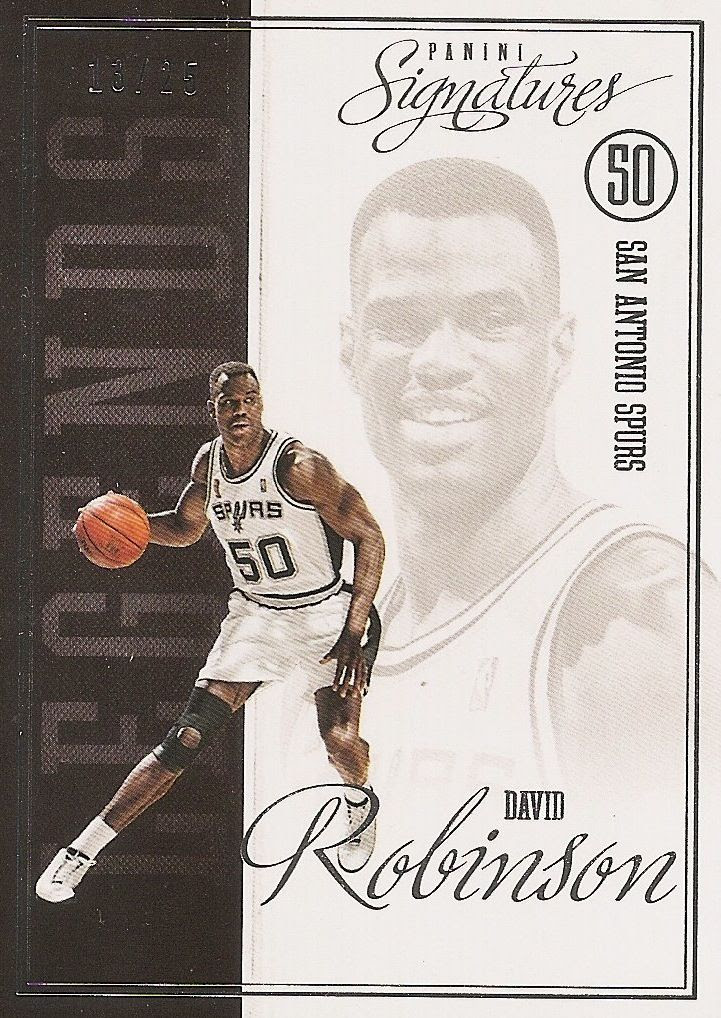 Base Card Design -
There really aren't any base cards in Panini Signatures Basketball, only very limited insert cards. These insert cards come in three 'flavors': Chase Legends, Chase Rookies, and Chase Stars. Each card is limited to either /25, /5 (green), or /1 (platinum)! Though it may seem easy to collect your favorite player in this set, the actual number of cards a player has in this set is deceiving. Take David Robinson for example. The card shown above is card number 61 in the Chase Legends set. Well, actually, Robinson takes up cards 61 through 70... so there are actually 10 variations of David Robinson cards. Player collectors who need to have one of everything will definitely have a challenge when trying to locate all the variations of these cards. It will already be quite hard to find each of the ten cards numbered to 25... adding the green and platinum parallels would be a monumental task! That being said, it might be worth it to try and collect these as they are gorgeously made cards. The simple black and white scheme with the elegant fonts and foil highlighting make these cards some of the classiest I've ever seen. The cards are also quite thick, which add to the premium feel. Panini has done a marvelous job on these cards.

Inserts/Game-Used/Autos -
This product is all about the autographs, there is no game-used memorabilia to be found here. When buying Panini Signatures collectors can expect signature cards, variations of those signature cards, and the occasional film cel signature. My box contained a die-cut parallel, a limited parallel, and on-card autograph, but unfortunately no film cel card. 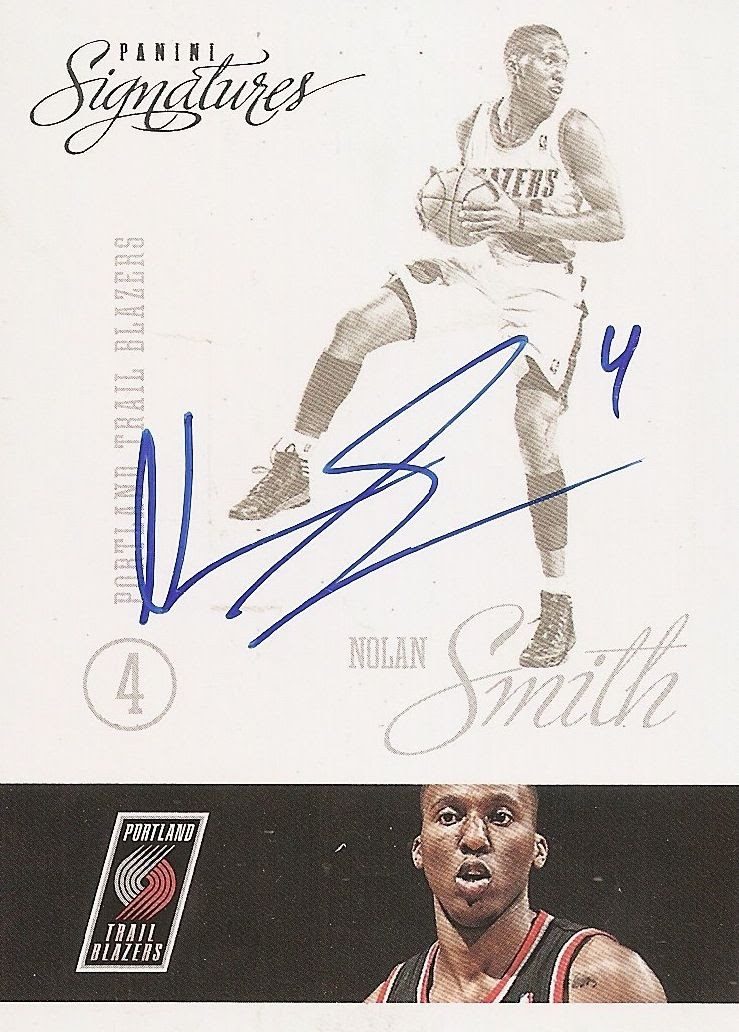 The standard autograph comes on a primarily white card above a black background photo of the player and their team's logo. This design is very unique. I was very impressed with whoever came up with this look. Though it is untraditional, the card works well and does not seem disjointed. It actually all comes together beautifully. I particularly like the contrast between the full-color close-up and the full-bodied black and white photo. What a great way to get multiple images on the card. Very modern. The Nolan Smith shown above features an on-card autograph. There is enough spacing on the card for the autograph to really pop out. Smith's signature on this card takes up just the right amount of space. It looks great. Nothing to complain about here in terms of how this card looks; it's very appealing. 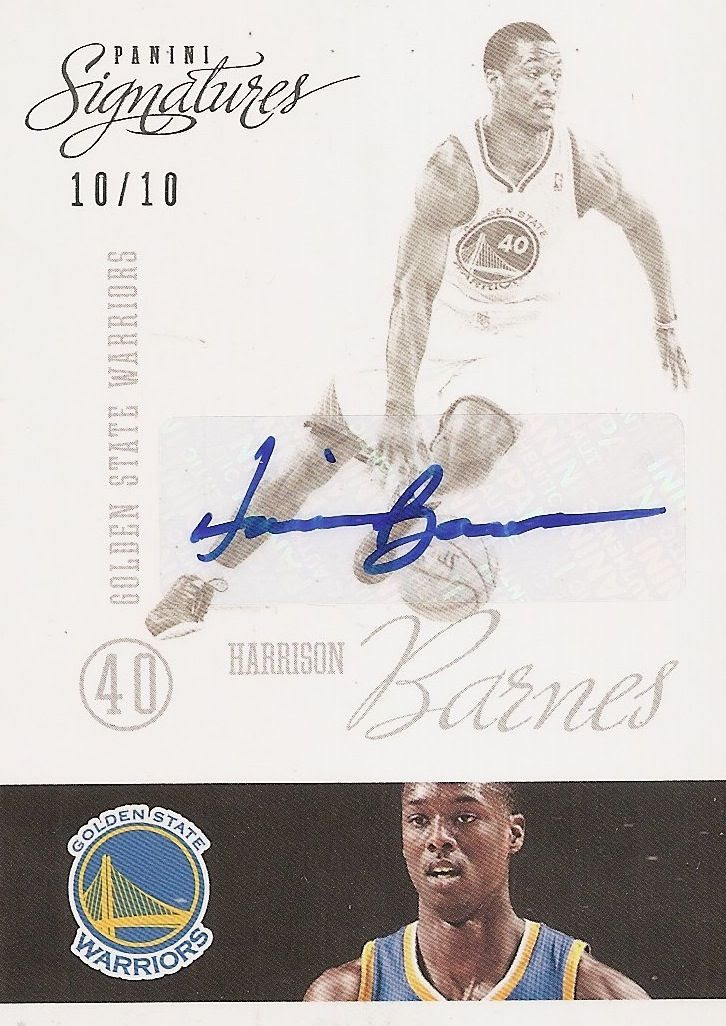 My next signature card was a limited parallel of Harrison Barnes. Unlike the Smith, this card has the sticker auto treatment. It's still a great looking card, but the sticker auto detracts from the look a bit. After seeing what a non-sticker card in the set looks like, the sticker versions leave more to be desired. I can't complain about the low-serial numbering though; I'll definitely take a card numbered to only 10 without complaint. Almost makes me not care that the card is a sticker auto! 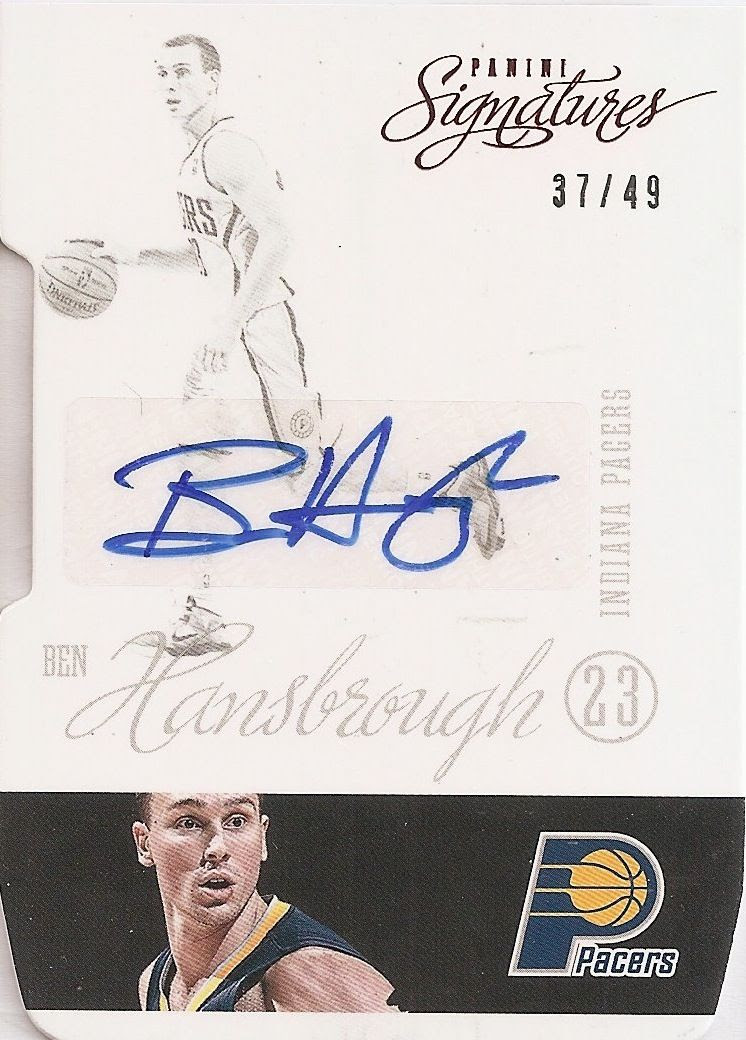 The final card in my pack was this Ben Hansbrough die-cut autographed card. As you can see it is a red-variation numbered to 49. The Panini Signatures logo is in bright red foil that denotes the variation. It's clear, it stands out and it looks good. The only thing I don't like very much about this card is the die-cut that Panini chose to employ. What is it supposed to be, if anything!?!? I like the die-cuts to be relevant to the card or theme. Cutting a card just for the sake of having a die-cut is not something I am a fan of. Perhaps these cards are die-cut this way for a reason... but it's not immediately obvious to me. That might just me my pet peeve. Overall, the card still shares the same positive qualities as the others in the set, and the overall design is still top-notch.

Overall Rating -
With only four cards per box at around $100, Panini Signatures Basketball is a pricey option. High-end collectors probably won't bat an eye, but I would say to mid-level collectors that this product is worth a try. The cards are simply beautifully done, and would look great in anyone's collection. Each box is guaranteed to give collector's a card that is numbered to 25 or less - that's pretty cool. Some people may be turned off by the fact that there are so many parallels and variations of players, which is a valid point, the number of different cards for each player is definitely confusing. But overall, I would have to say the sheer quality and look of this product is worth the buy. For me, getting a concentrated amount of guaranteed autographs (rather than memorabilia) that look great is always a good thing.


Check out my box of Panini Signatures Basketball: