Although 2013/14 hockey products are already on store shelves, the just released Panini Prime is actually a 2012/13 product. In fact, it's the last hockey product of that abbreviated hockey card year. Panini has been leaking previews and making collectors salivate with anticipation for weeks. But Prime is now here, and it's brining some Dominion along with it! It'a a product that many have been looking forward to. Let's take a look at what it brings to the table! 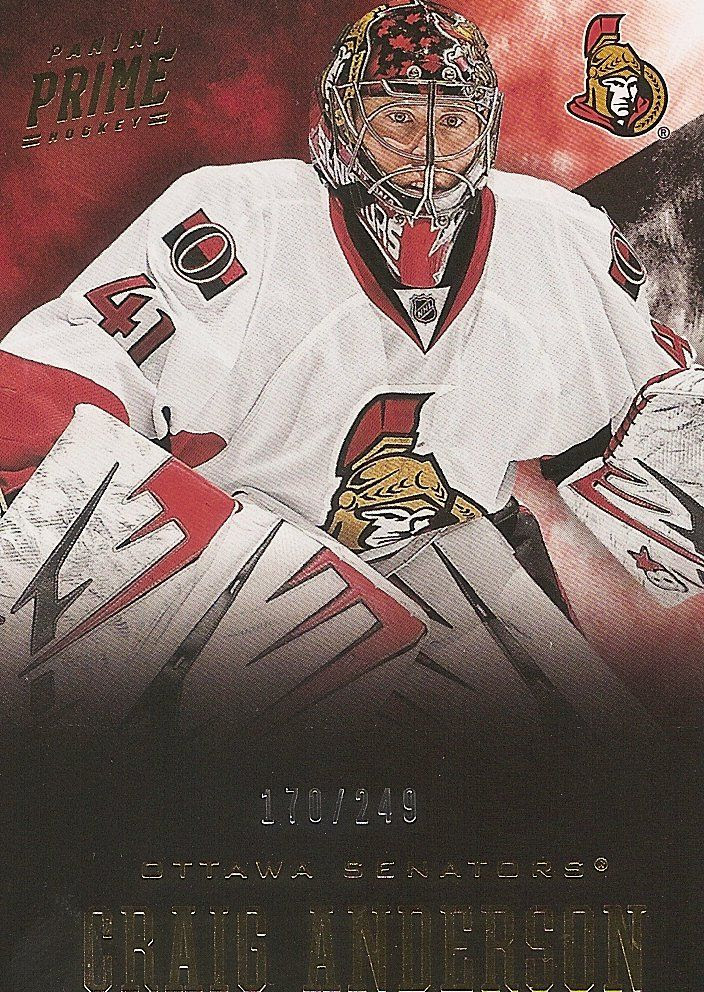 Base Card Design -
The Prime base cards have a simplified look compared to it's inaugural debut. Each prime base card is numbered to just /249 and is on heavy-premium stock. To me, the base cards now carry a more mature look. It's probably the fade-to-pitch-black thing they have going on at the bottom portion of the card. It makes for a very stark look. The all-caps gold font used for the team and player name is strong and bold. I do think that this darkened space takes up a bit too much room on the card though. It's a good third of the entire front! If it were up to me, I would have lowered the area to meet either the serial numbering or the top of the team name. As they are, the dark area makes it look like part of the player photo is hidden. On a more positive note, the smokey background is back and looks very nice. It's definitely part of creating that mature look that I talked about at the beginning. It's a design that I think higher-end collectors would appreciate and enjoy. 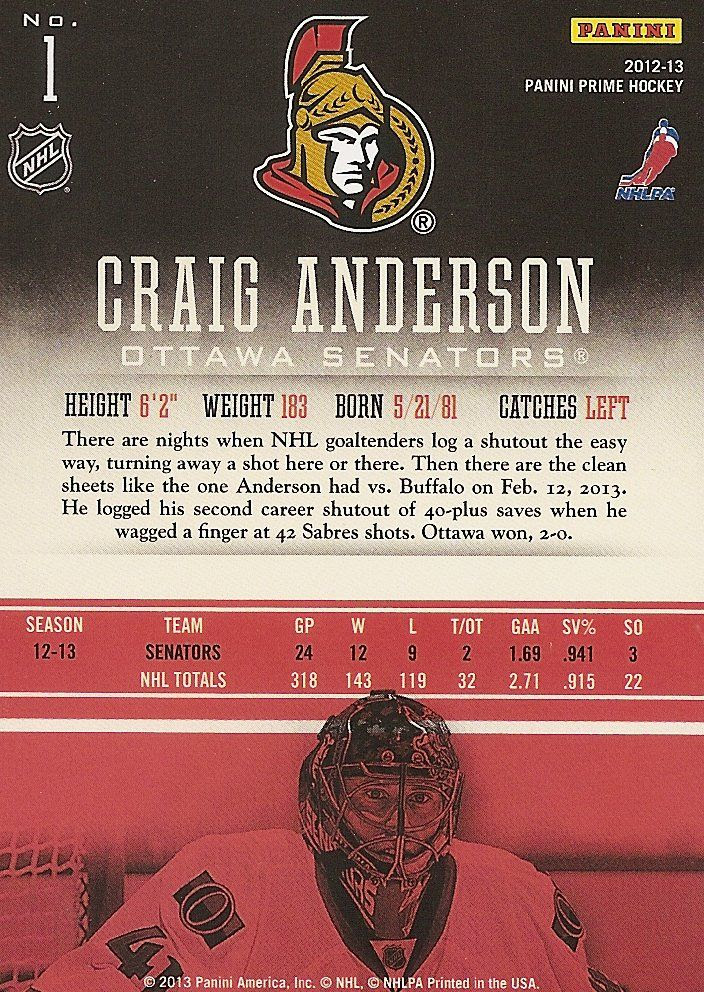 The backs of the Prime base cards are intriguing to me. Usually, player photos are located toward the top of the card; here, it's at the bottom and incorporated with the player stats. It's definitely a different look. Also different is the choice to make the photograph monotoned. All this contributes to a very unique looking card back. I've complained a bit in recent about bland Panini hockey card backs. I can say that these Prime backs don't have that problem. Panini has done good with these. I prefer these backsides to the front! 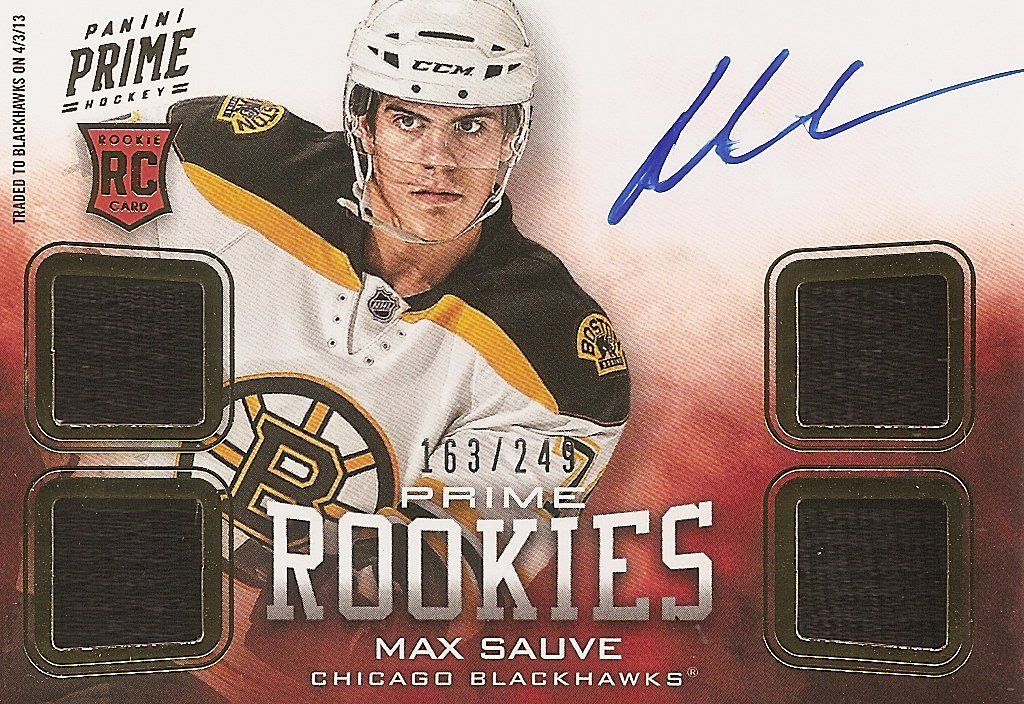 The rookie cards in Prime come at the back-end of the regular base set. Each rookie card features an on-card autograph and four memorabilia pieces. Standard rookie cards are numbered to /249, but more limited versions with premium pieces like prime jerseys, patches, and fight straps are available too. The rookie cards this year have a very pleasing look. It was a great idea to separate the four memorabilia pieces into two per side. The spacing is just right, and it's nice to have the player photo in a more central location. The Prime Rookies logo has been done in a way that creates a stretching effect that I think gives the card a movement-type quality. These cards are an improvement from last year. They look great!

Inserts/Game-Used/Autos -
Each pack of Prime only comes with 5 cards, but... Panini has given collectors a nice bonus in the form of a 2 card pack of Dominion. Panini has loaded up Prime a huge variety of jersey, prime jersey, patch, skate, glove, ties, and helmet cards. It was pretty incredible seeing the previews of what can actually come out of Prime boxes. 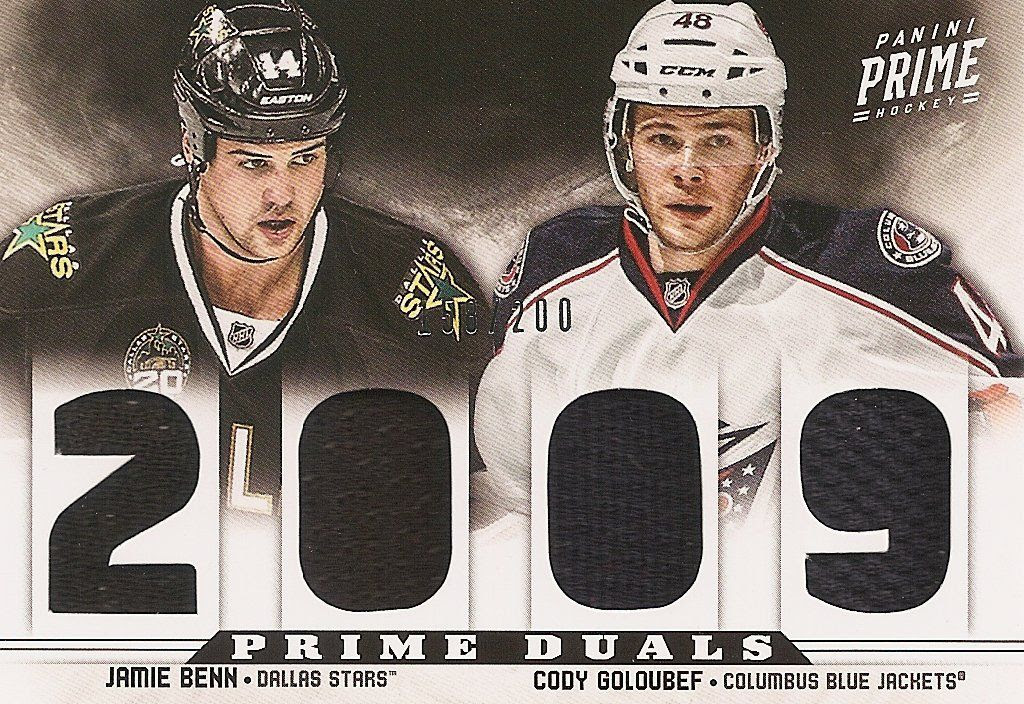 Common to Prime this year are the multi-jersey die-cut cards. These types of cards feature one or more players on them with a word filled in with memorabilia pieces. Panini has done a pretty good job of finding unique and fun combinations of players to group together. While the concept is a good one, I find that these cards have been done a bit too often. They don't garner as much attention as they would have a few years ago. Also, while the jersey swatch cut-outs give you a clue to the relationship between the players, it would have been nice to include a write-up on the back to further clarify that relationship. The backs simply have a guarantee from Panini that the swatches were player-worn. 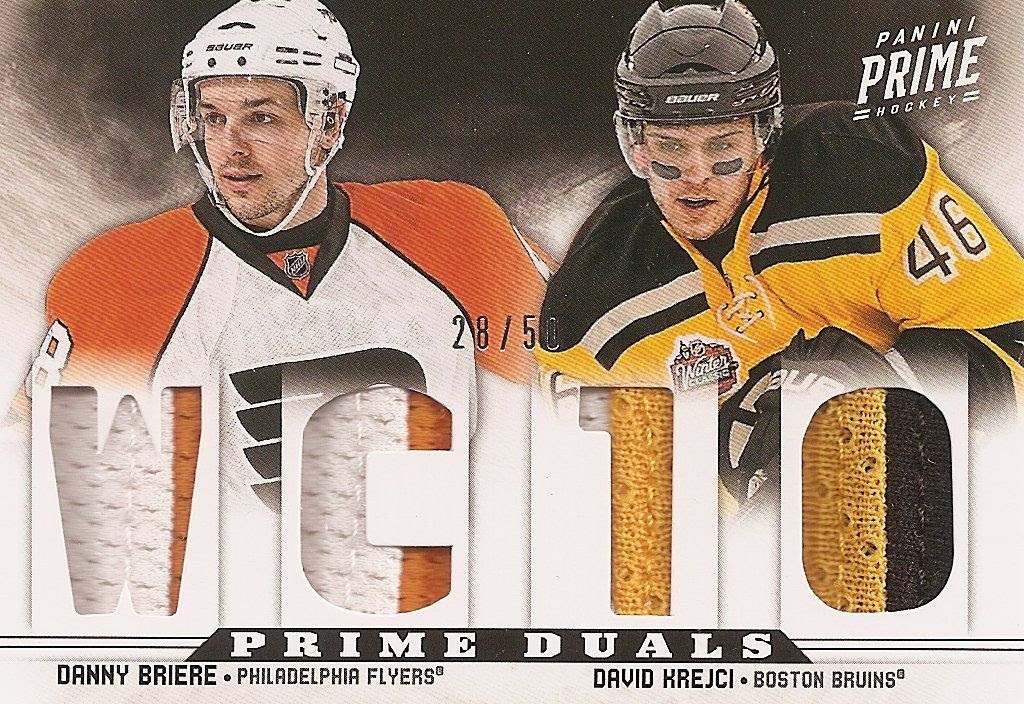 The better the memorabilia inside, the lower the print-run. Here's a Prime Duals with prime jersey pieces of Danny Briere and David Krejci numbered to just /50. The memorabilia pieces with thick seams and multiple colors look great and really help to set off this card. The patch version of these cards halves the print-run again to /25. Patch pieces can look even better than these... provided they are not of the one-color variety. 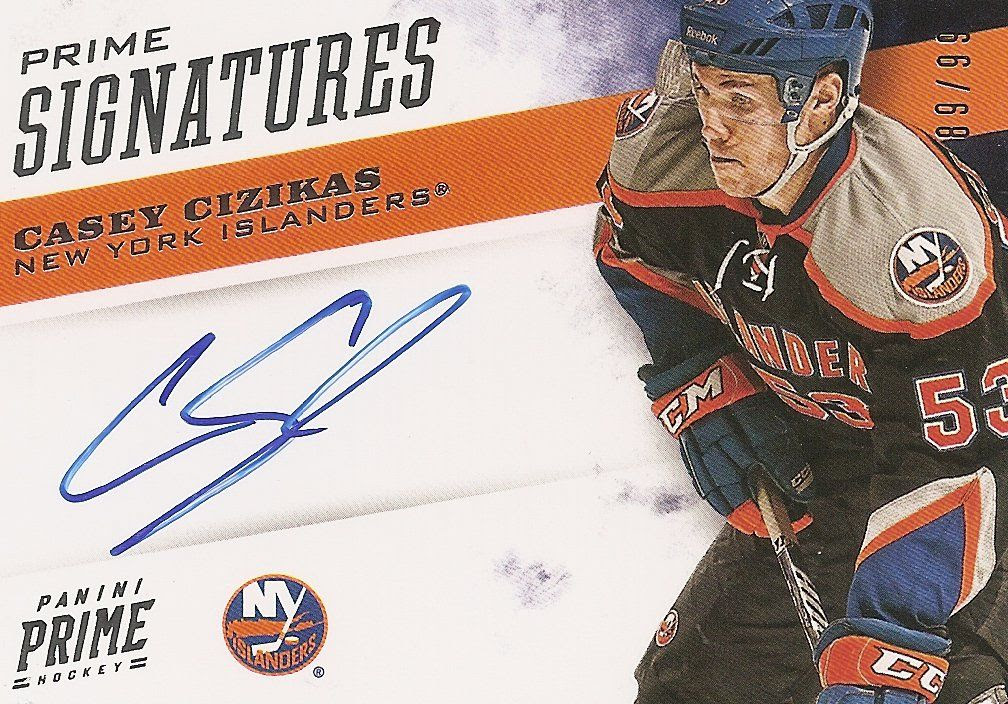 Prime Signature cards have made their way again in to Prime. These cards have gone horizontal. Unlike what I thought of the base cards, these ones went from a more stoic tone to a faster one. The tilted lines that grace these cards give these cards a fast feel. It's a nice change that reflects the speedy nature of hockey. Last year I pulled cards with faded blue ink... and the Cizikas above appears to have some of those same issues. Hopefully it's not a wide-spread problem. 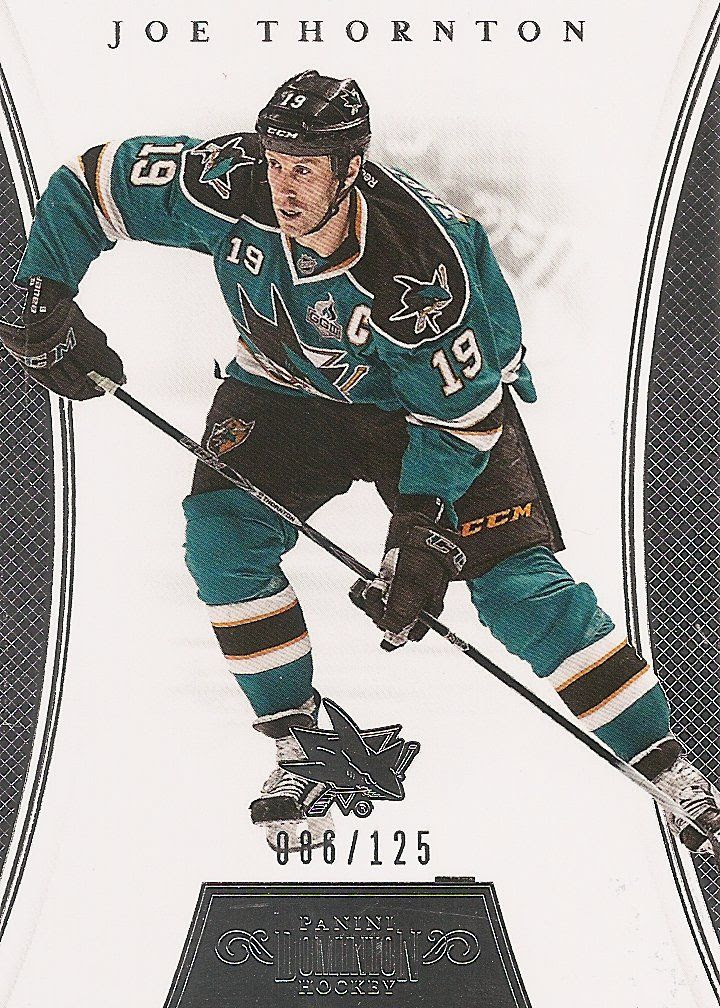 Dominion packs typically will give you one base card and a Dominion hit. Lucky collectors might get a short printed base card. This year's Dominion base are very reminiscent of the 11/12 cards. In fact, when I saw them I thought Panini had actually recycled the same design. While it is similar, it's actually not. The foil edges on these Dominion base cards form inward facing slopes. Last year's foil was in the shape of a wide dip.... so... this year's and last years are basically the reverse of each other. Slight changes in the Dominion logo at the bottom are also difference indicators. The base cards are very thick, as a super-premium card should be. 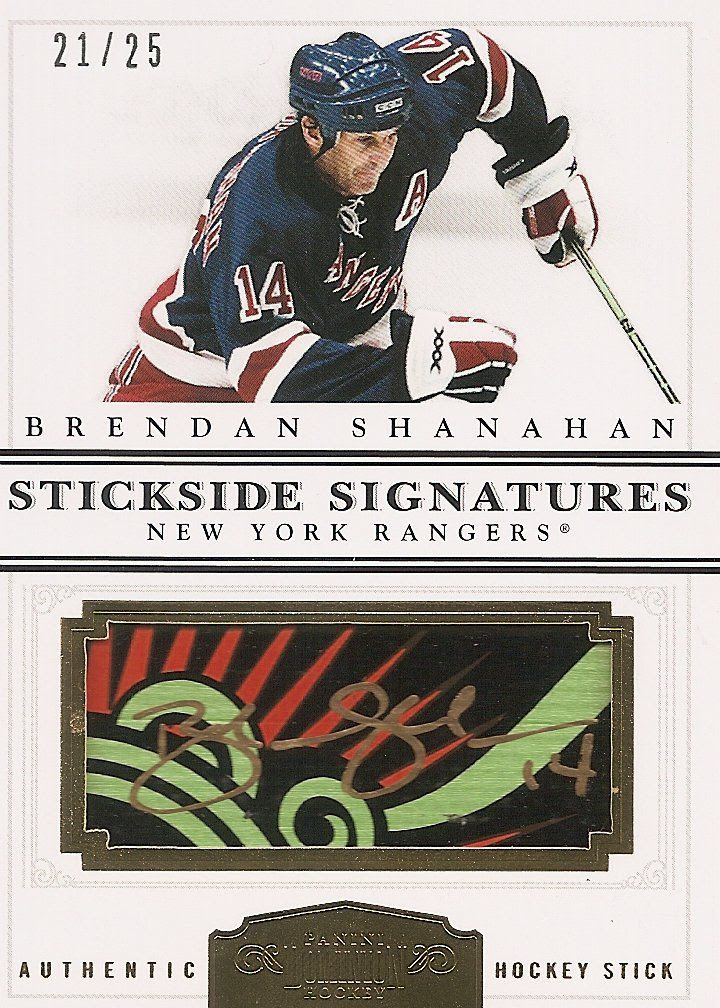 I felt that this Prime box was below average for a break. Luckily, I did get the Stickside Signatures card above to help boost it up a little. If this card looks familiar, it is. It's actually a holdover card that didn't make it into last year's Dominion release. It's a gorgeous card with a crazy looking piece of stick. The autograph is a bit difficult to see but it's there in gold ink. This card doesn't make the break a good one, but it softens the blow of this soft Prime box.

Aside from the Dominion Stickside Signatures, this particular box of Prime didn't have anything too impressive. I have watched many, many breaks in 12/13 Prime in the past couple days and have seen some very sweet, nasty cards come out. You'll just have to take my word that there are amazing Prime cards out there to be had.

Overall Rating -
Panini Prime is a great way to end the 12/13 hockey product season. There is a ton of amazing memorabilia that will blow your mind that can come out of it. To get a better read on Prime, I'd suggest going on Youtube or looking on the hockey card forums and seeing the breaks that are posted. They are definitely worth a look.

Prime is pricey for only seven cards, but they that's the nature of very high-end products like this. For those who have the money, this is probably the best you can do in terms of a 12/13 hockey card. I'm sure the high-rollers out there are already diving deep into it.

I do have to say though, that as much of Prime that I've seen, I've noticed that the real big named stars come few and far between. Stars like Crosby, Ovechkin, Stamkos... they are not easy finds. So while you may get some crazy, crazy looking patches... it may be of a more minor star or fan-favorite. Is that something you've noticed? I'd be very interested to hear your thoughts on that.

But in any case, Prime is still the best and most premium card release for 12/13 hockey. Did Panini improve over last year's product? I'd say yes! Prime is a very fun rip.

Check out my 12/13 Panini Prime break at D&P Cards in Sacramento, Ca: