Here it comes... the DOUBLE ROOKIE CLASS!!! Both Upper Deck and Panini are majorly hyping this year's crop of rookies, and Trilogy is the first product out of the gate with to feature their cards (though technically the retail version of 13/14 Score did come out yesterday). Trilogy is a very interesting product as it has been out of the Upper Deck release schedule for a few years. It has returned with a new configuration and higher price tag. Let's take a look and see what Trilogy brings to the table. 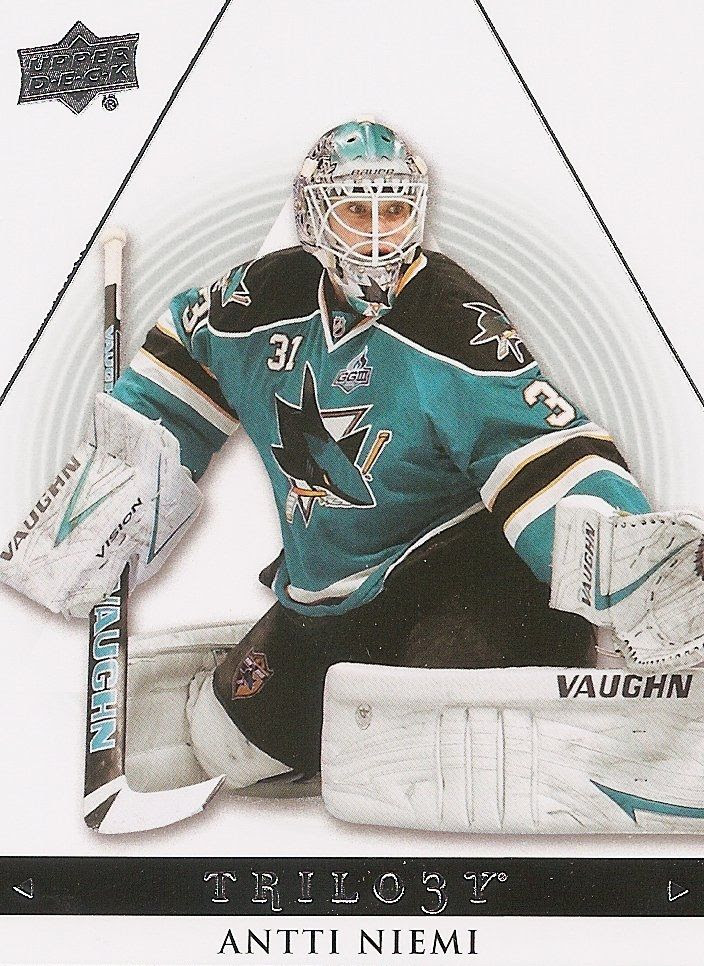 Base Card Design -
The Trilogy base cards have a classic SP-ish design to them. They are very clean, primarily white cards with modern graphics and foil touches. It's a mature and understated look that really does work. The background of the card features triangular shapes that make complete sense for a product called Trilogy. The cards are a bit thin for my liking, but overall they still look good and have a premium feel about them. If I had to make a complaint, I wish Upper Deck came up with a more radical design for these cards - they really could have called this SP 3.0 or something like that given the similarity to those cards. 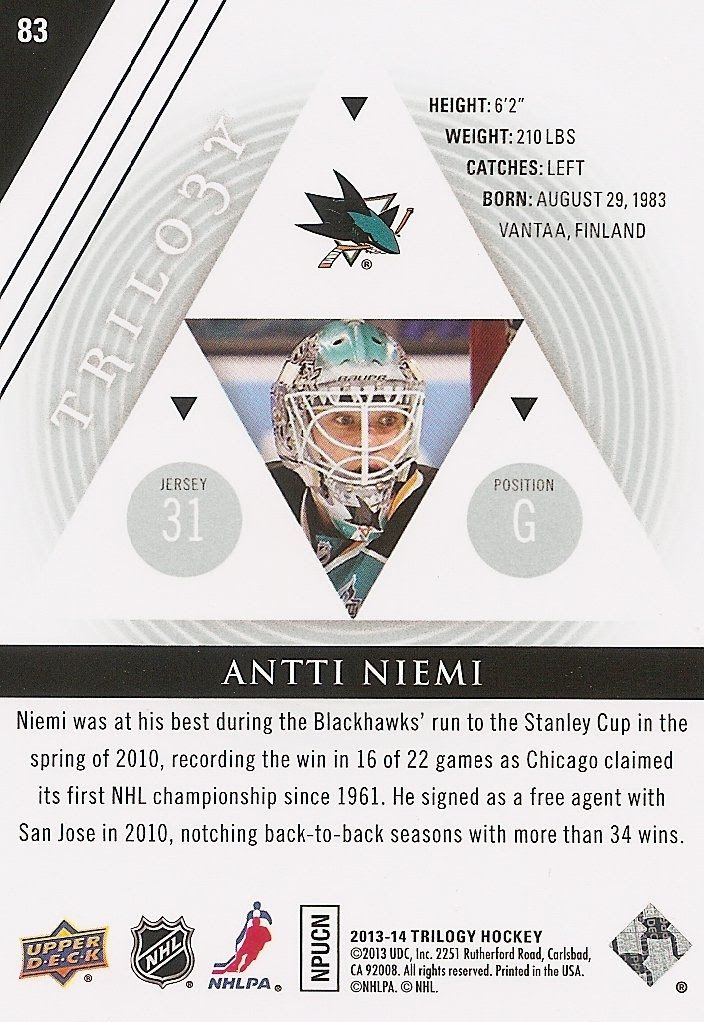 The Trilogy backs are interesting in that they feature absolutely no on-ice statistics. Collectors will find a paragraph of information along with the player's number, position, and vitals. The design of the card backs go along very nicely with the front. As usual, Upper Deck does a bang up job of unifying the look of the card on both sides; the color scheme, fonts, and graphics match up nicely. 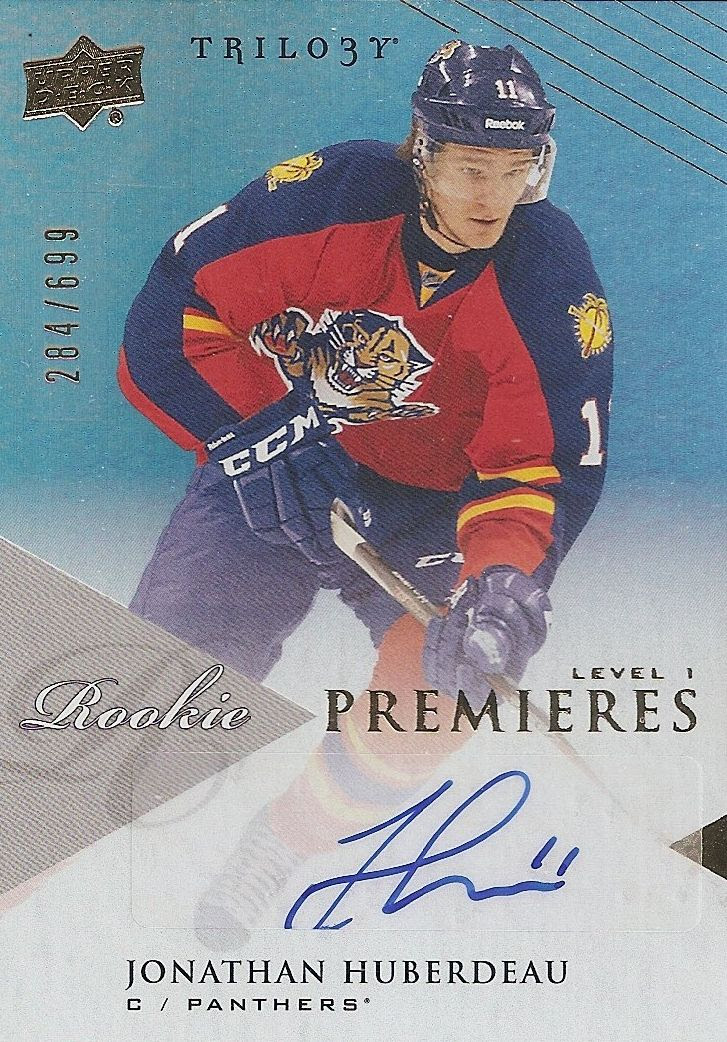 Rookies in Trilogy have an interesting serial numbering system. Each rookie has three versions: level 1 numbered to 699, level 2 numbered to 399, and level 3 numbered to just 49. Each version of rookie card features a different design to them. The level 1 rookie of Jonathan Huberdeau shown above is all foil with a 'zoomed out' full body shot. It's a very good looking card that reminds me of the fully foiled Trilogy rookie cards of the past. 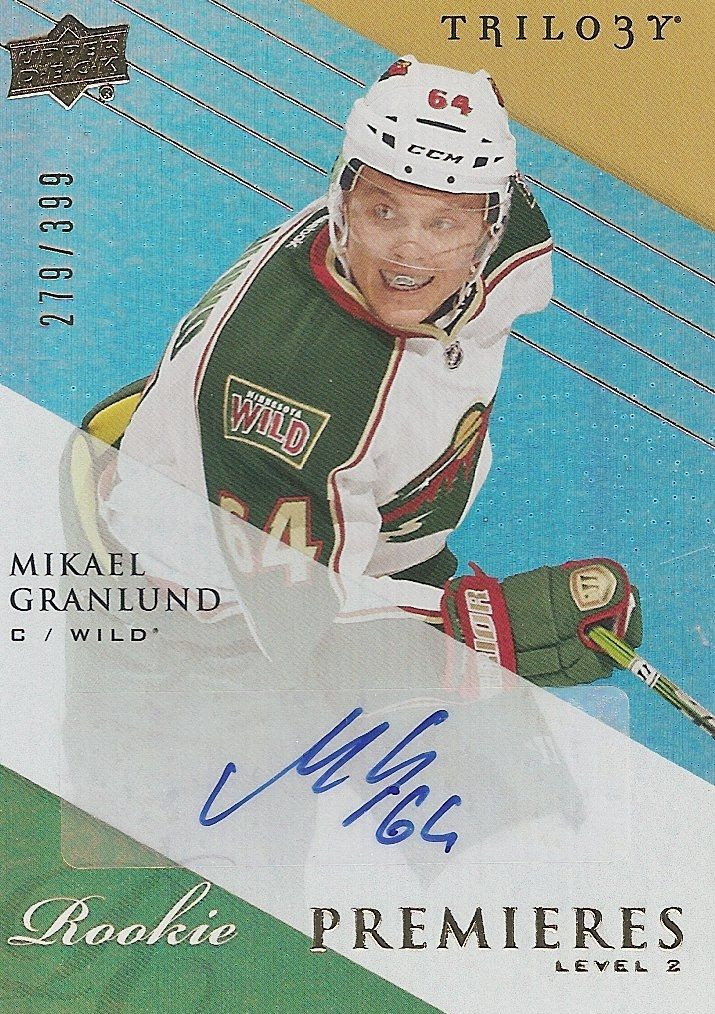 The level 2 rookie cards look to have a closer mid-body shot of the player. The graphical elements on the card are a bit larger as well. Notice that the golden foil lines on level 2 are much thicker than those on the level 1 card. And though I didn't pull a level 3 card in my box, I have seen that Upper Deck has chosen to use up-close head shots of the players for those cards. I think that this particular tiering system is very interesting. Not only is the numbering different, but so is the design. It will be very interesting to see how collectors react to having three rookie cards of the same player in Trilogy. It's perfect for a product with a 'three-theme', but will it confuse collectors? That's my question. Also, which card will collectors deem to be the 'true' rookie card? Time will tell!

Inserts/Game-Used/Autos -
Each box of Trilogy comes with three mini boxes of three packs each. Upper Deck states that there will be a rookie autograph in every mini box. Each pack has a 'hit' in it, be it a memorabilia, autograph, or crystal card. In total, collectors can expect to pull nine hits per hobby box of Trilogy. 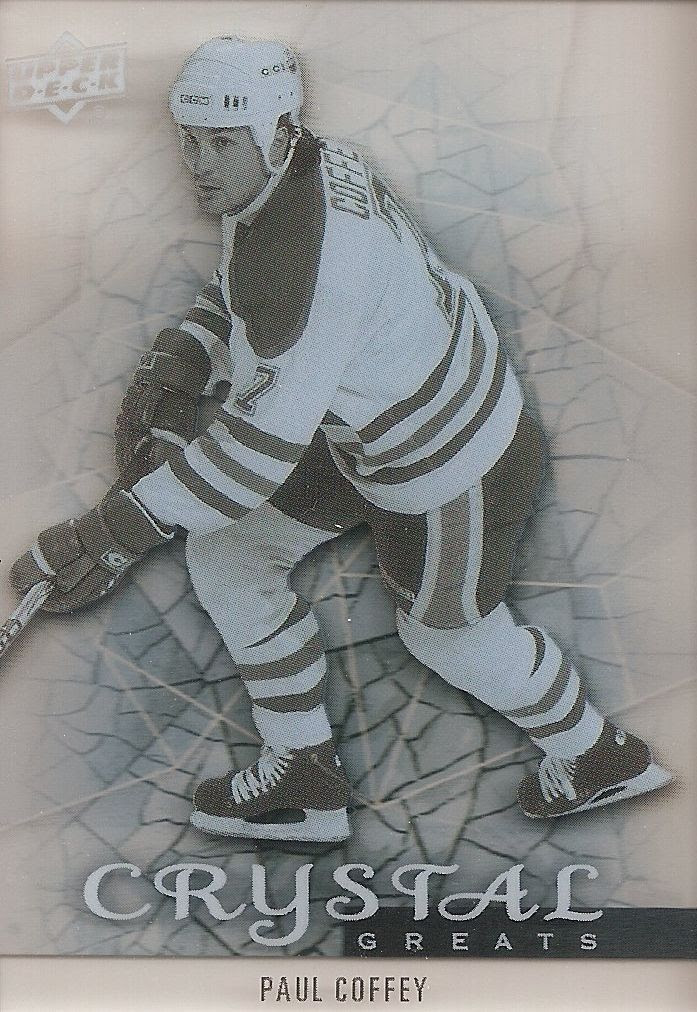 Crystal cards are new to Trilogy this year. Though Upper Deck is touting them as something new, they are very similar to the thick Frozen in Time inserts from past iterations of Trilogy. The Crystal cards look very nice. The card has a three dimensionality to it. In the far background there appears to be a cracked ice surface; the image of the player floats above it. I do like the look of these cards and though I'd rather have an autographed card, I think I prefer getting this to pieces of jersey. The Crystal inserts feature active and retired players at various tiers of difficulty. The Paul Coffey I pulled comes 1:66 packs. Getting any Crystal card is 1:9, which translates to one-per-box. 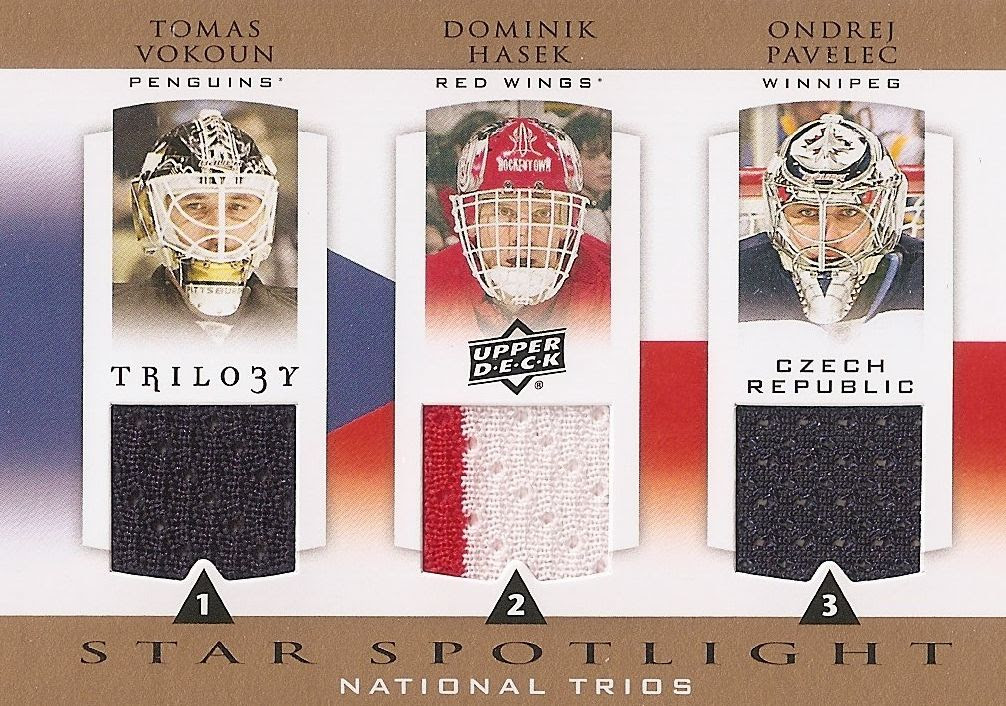 Triple jersey cards of National Trios and Past/Present/Future stars like this card above can be found in Trilogy this year. These triple jersey cards are probably the most boring cards that you can find in the product. Though there are three swatches of jersey on the card, the swatches are pretty small, and jersey cards just aren't that exciting anymore. I get the fact that putting three jerseys on the same card is the Trilogy theme, but these cards are just tired. It could be the design though... while I like the picture of the flag in the background, the rest of the card looks like it came from an un-used SPGU Authentic Fabrics idea. These cards should have, and could have, been done much better. 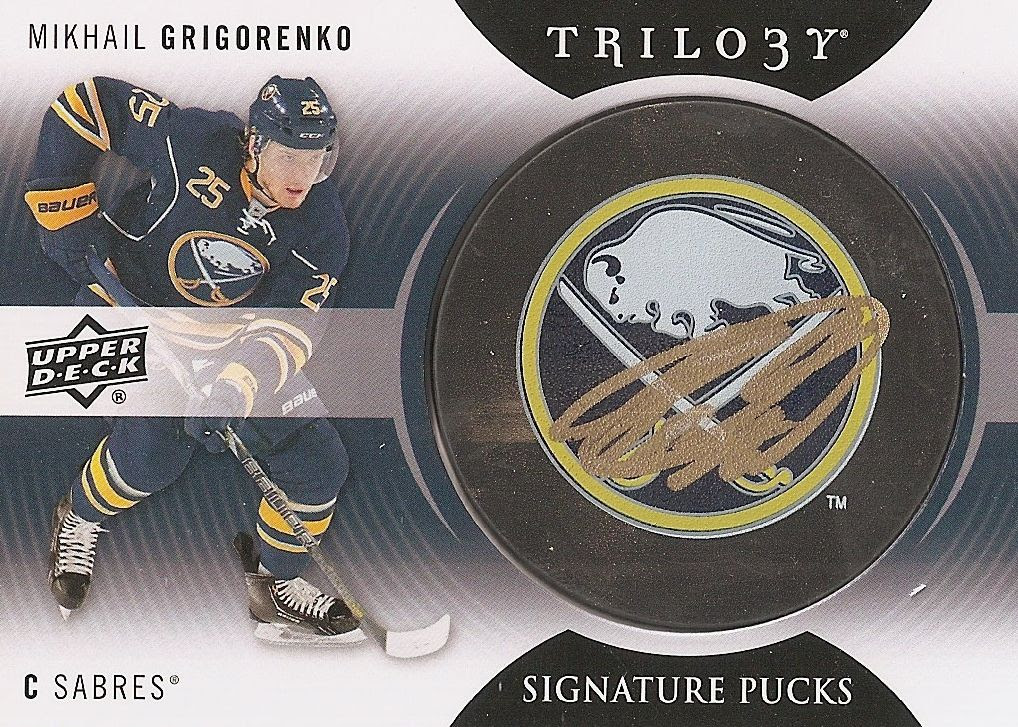 The Trilogy Signature Pucks autographed card is a take on the old Sweet Shot concept. I think collectors will enjoy these cards - if the pen ink doesn't smudge like mine did. Pucks are an integral part of hockey, and featuring the puck like this is fun. The card is well designed. There is a movement to these cards that is created from the circular lines emanating from the rubber puck. It's a cool effect. Obviously the puck is not a game-used item, but I think it works better than a cut of an actual game-used puck. The size is right, and I really enjoy the team logo affixed to the front. 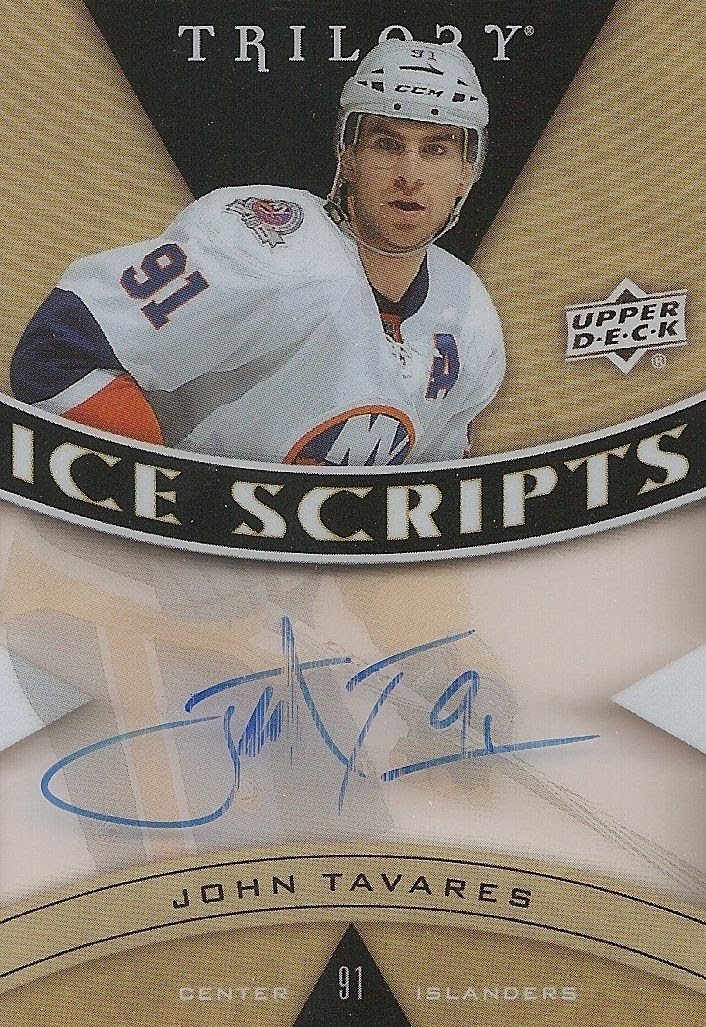 Ice Scripts are back for collectors to find in this year's Trilogy. I wonder if I should call these acetate cards or Crystal cards... I'm not sure... but what I am sure about is that these cards look great! The clear space for the autograph is a perfect idea. Unfortunately for me, my Tavares autograph was smudged. Had it been a clean autograph, this would have been my favorite pull from my box. As it stands, the Tavares card is going back to Upper Deck for replacement. I hope this isn't a problem with the entire run of Ice Scripts. If it isn't, these cards will be a favorite amongst collectors.

Besides what I pulled from my box, those who buy Trilogy will also find base card autograph variations as well as Clear Cut Combo autographs. I don't believe that their are patch cards in this year's Trilogy, so don't expect to find a triple patch variation of the triple jersey cards. All of Trilogy's insert cards have different tiering. You're going to want to check each one to see if it is a short print or not.

Overall Rating -
Upper Deck has done a good job of re-booting their Trilogy brand. I can honestly say that I really enjoyed opening up the box! Their goal was to up the premium feel for Trilogy, and they succeeded. I definitely thought that this version of Trilogy was of a higher quality than the Trilogy brand of the past.

With premium quality comes a premium price tag. A three-mini box (nine pack) hobby box costs a little under $300. That's quite a bit! The high price tag may scare off collectors from purchasing this product. It might be a good idea to get in on group breaks of this rather than breaking it by the box for collectors who usually don't go for boxes in this price range.

Trilogy has always been a product with a high price tag, but now it's even higher. I wonder if it will translate into higher resale values. As expensive as Trilogy was in the past, cards were never big money makers compared to the price of a pack or box. I think the final pricing of Trilogy will depend on how collectors assess Trilogy. Will they lump it together with their past memories of it, or will they see it as a new premium hockey product?

For me, I really liked opening my box of Trilogy. Getting nine hits is really fun! For those who can afford it, I would say get it. It's a very fun break... and who knows... maybe this double rookie class will be great! If it truly is, then it's definitely a smart buy. With full boxes being so highly priced, I wonder if many collectors will go for mini boxes or packs of Trilogy. That is definitely an option for those who have dealers that are willing to break the product down into its smaller bits.

My only issue with Trilogy was with some card quality problems I found in my box. Hopefully that is not something that others will be plagued with. I'd be glad to try another box though!

Check out my break of 13/14 Trilogy from D&P cards in Sacramento, CA: