I'm a little late to the party... but better late than never! Score came out a little over a week ago, and I'm just getting my hands on some of it today. Score comes in both retail and hobby versions. The retail version of Score comes in a pretty standard packaging configuration of 36 packs/box. They have been upgraded a bit as now each box comes with an autograph hit. Hobby boxes are jumbo sized. Each brick of a pack comes with 52 cards. Collectors can find hobby exclusive content in them. Today I'll be looking into a hobby jumbo box of Score. Let's check it out! 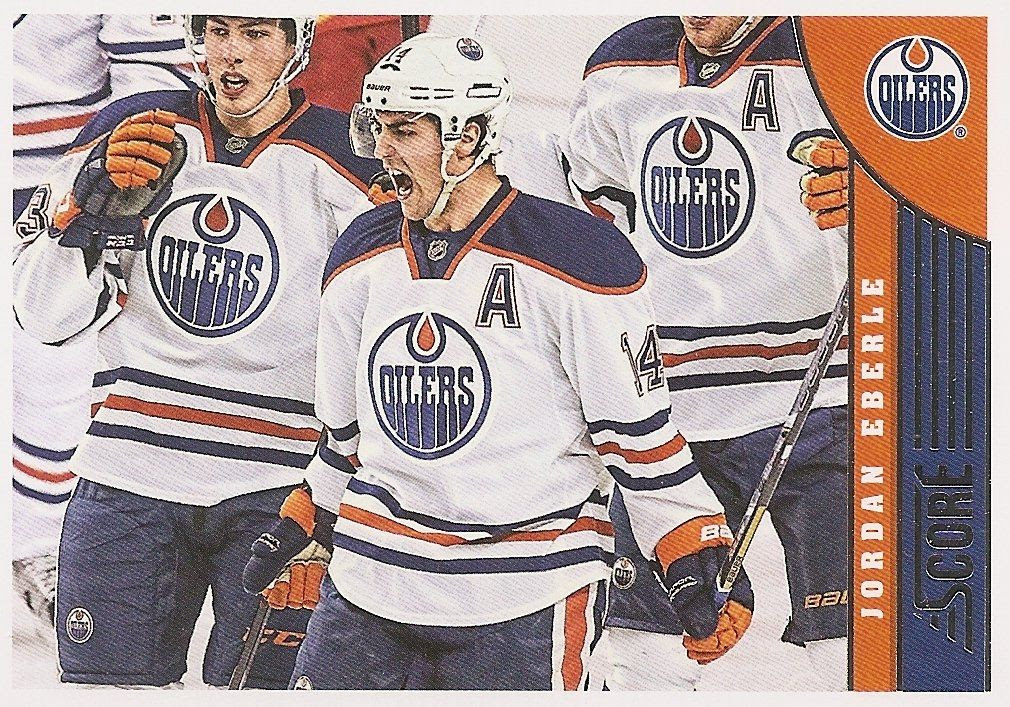 Base Card Design -
The Score base card is very simple and understated. Each base card contains a simple graphic with the player name, Score logo, and team logo below the player image. A white border surrounds the card. I like the card for it's cleanliness, but it's a bit too 'low frills' for my liking. After a few more sets come out, I'll probably forget the what these base cards even look like. Back in the day, Score used to really 'wow' you with their crazy graphics. I kind of miss those days. Since Panini has resurrected Score in hockey, each year has been just a little less glitzy. I will say that I enjoy this design much more than last year's effort... but I still want more! On the positive side, adding foil to the Score front is a sweet touch. Panini has given each card a little bit of shine that doesn't get in the way; it's very tastefully done. Also of note, the photography in Score is top rate. I'm really happy to see interesting, high quality images on these cards. Take note Upper Deck Series 1 and 2... Score's coming for you! Well, it's not at that level yet, but the picture quality improvement is very noticeable. Now they just have to get rid of that low-end white border. That's one of my suggestions on how to make these cards even better. Take notes Panini! 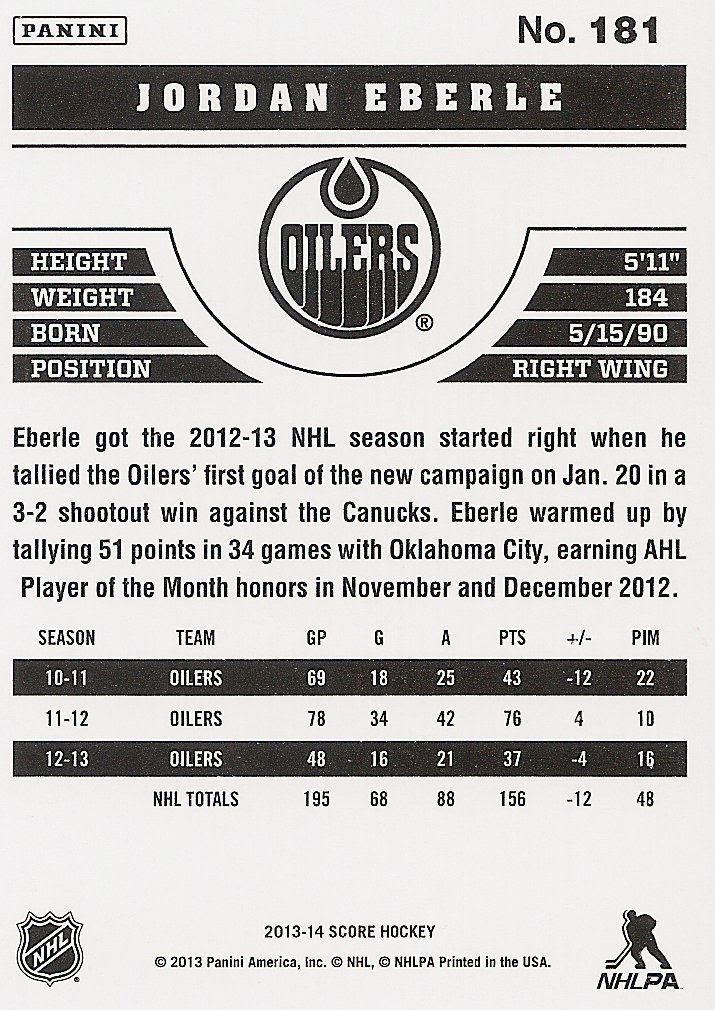 The back of the card is super spartan TO THE EXTREME! But it actually kind of works! Rather than trying to put out a card back design that will just be middling in nature, Panini has decided to make them very stark and utilitarian. There are design elements here, don't get me wrong, but these backs are probably the most flat and one-note that I've seen in a very long time. When I first saw them, I was a bit surprised, but I realize that these were probably the best choice for this set. I applaud whoever gave the green light with this back design - ballsy! 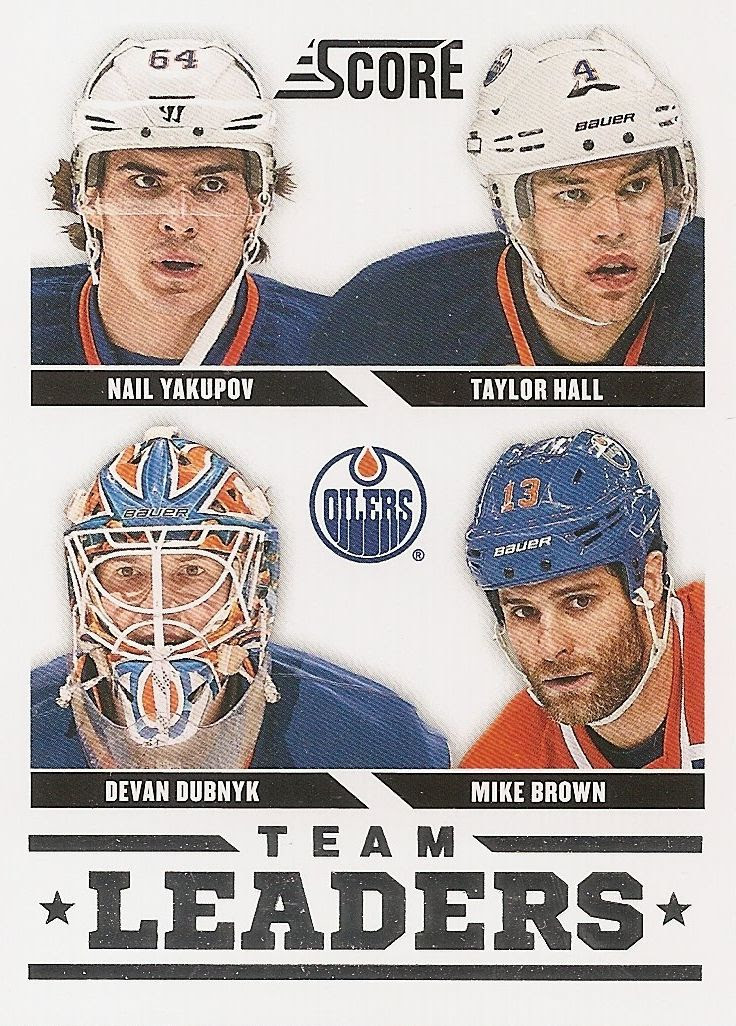 Three subsets come after the base cards in 13/14 Score. The Team Leaders cards feature four players from each team. These cards highlight the players with the most goals, assists, wins, and penalty minutes. The four headed design is very pleasing to the eye and is a call out to the old baseball team leaders cards. Like the base cards, these are very clean with just the right amount of foil. Unlike the base cards though, these have a design that isn't forgettable. The Team Leader cards look great. 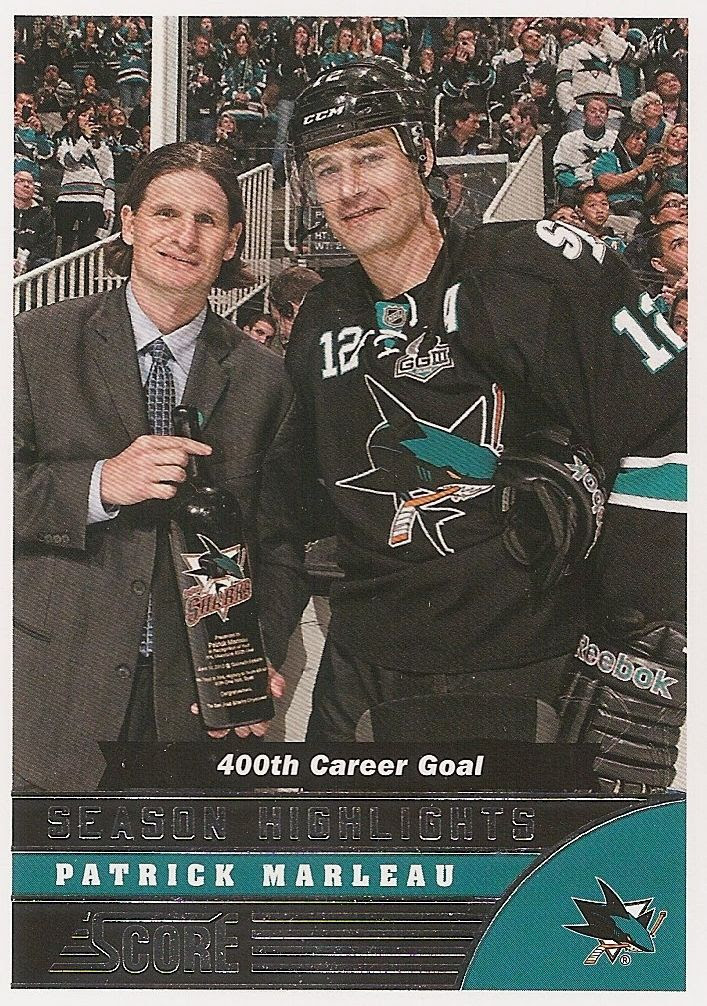 Season Highlight cards give collectors a chance to remember some of the important moments from last season. This subset shares a very similar design to the base card. The addition of the Season Highlight banner and the player's accomplishment are the only differences. To me, there should have been a greater difference between these and the base. I like the idea of these cards, but Panini should have differentiated these cards better. 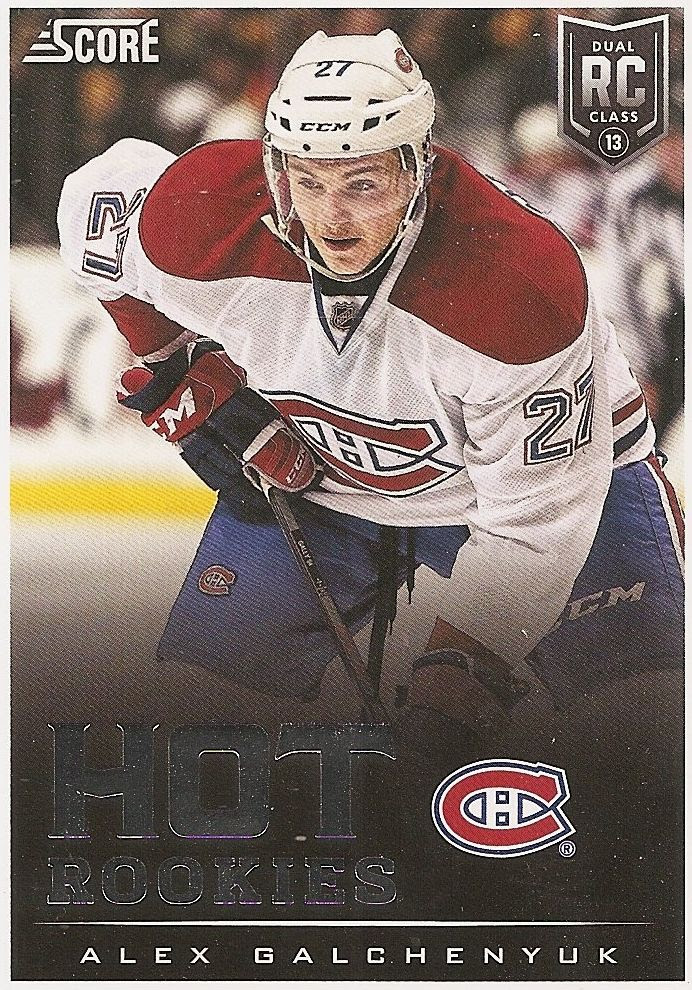 Finishing off the set are the Hot Rookies... and there are a lot of them! Each rookie card has a special Dual RC Class emblem in the upper corner of the card. These rookie cards have a dramatically different design than the base cards. The player fades in from black if looking from bottom to top. Highlighting the card is the 'HOT ROOKIES' logo in shiny silver foil. It's a generous amount of foil to celebrate the player's rookie card. Though the logo is large, it doesn't take over the card in any way. The 13/14 Score rookie cards are real winners in my eyes. They are just right in terms of look, design, and feel for Score.

Inserts/Game-Used/Autos -
Each box of Score, be it retail or hobby, will give collectors at least one hit. Retail boxes will spit out an autographed card while hobby boxes give out three hits - a memorabilia card and two autographs. The increased frequency of hits has bumped up the price of Score a bit... but not by too much. Though it might not be at the one dollar mark anymore, the much better chance to get a hit is worth the bump in price. 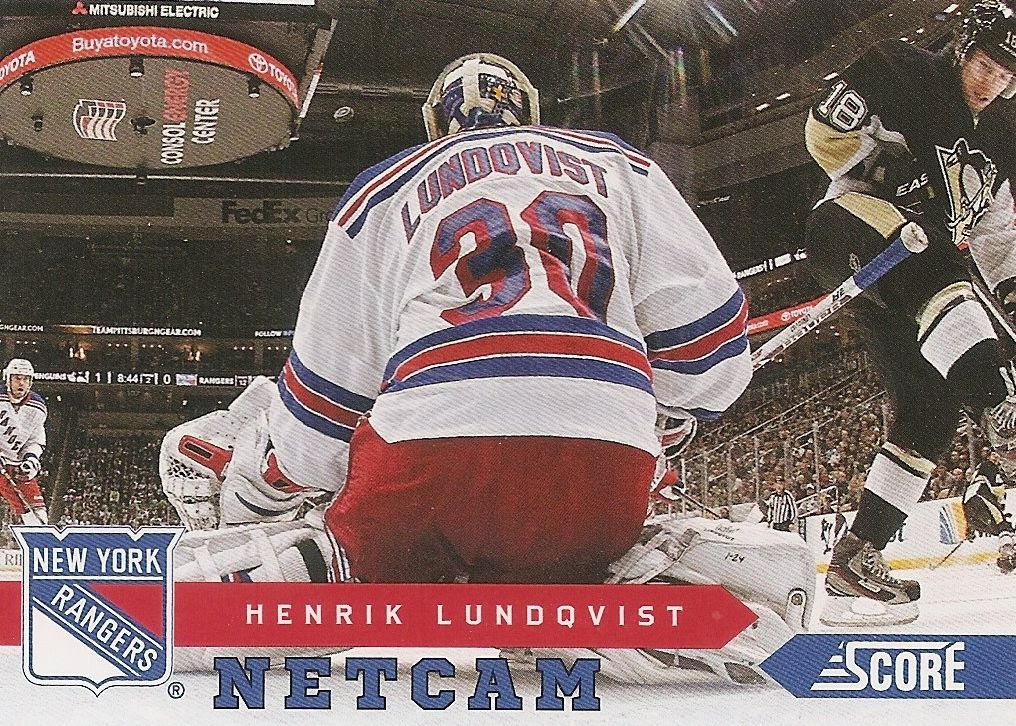 Let's begin with the inserts. Many of Score's classic inserts have been brought back this year with updated looks and designs. Netcams have been a collector favorite for a few years now. They had gotten a bit tired, but this year Panini has refreshed the look a little. Though some collectors may not need any more shots from inside the goal, goalie collectors should still really enjoy these cards - and I'm sure they will be putting together this relatively easy to complete insert set. 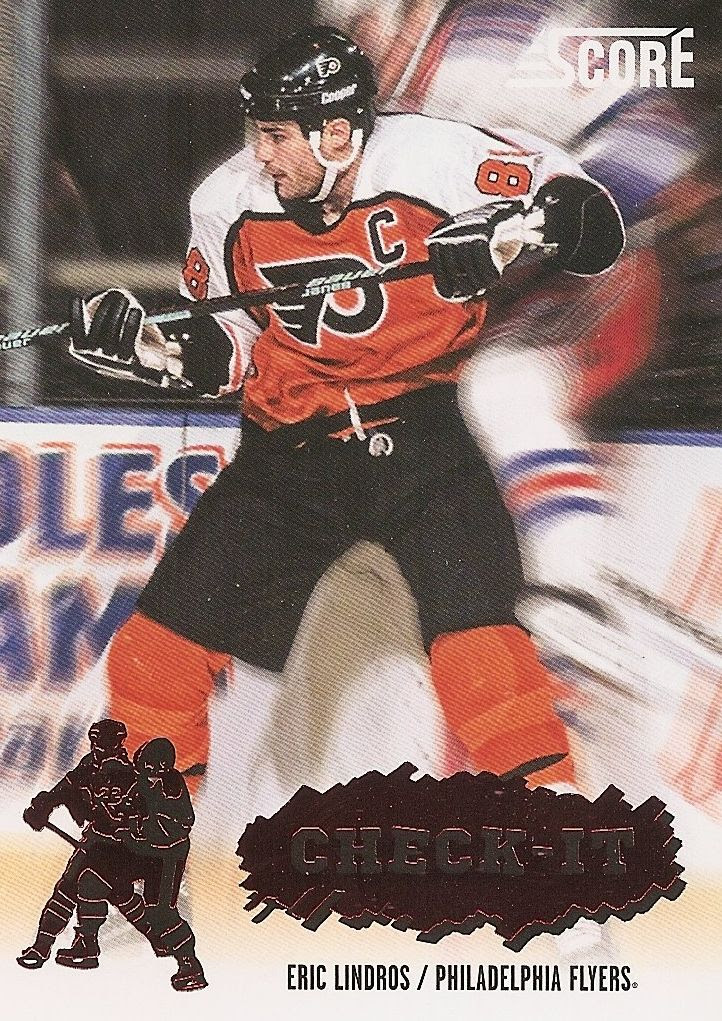 Check-It cards bring back the foil! Check-It cards have been around for a very long time... since before the Score reboot! They have always been a bit tougher to get than the other Score inserts. Maybe it's because of the foiling... a cost saving measure? I'm not sure. But they are sweet looking cards. There is a 90's retro feel to these that older collectors might enjoy. It's probably the most in-your-face design of the entire 12/13 Score line-up. 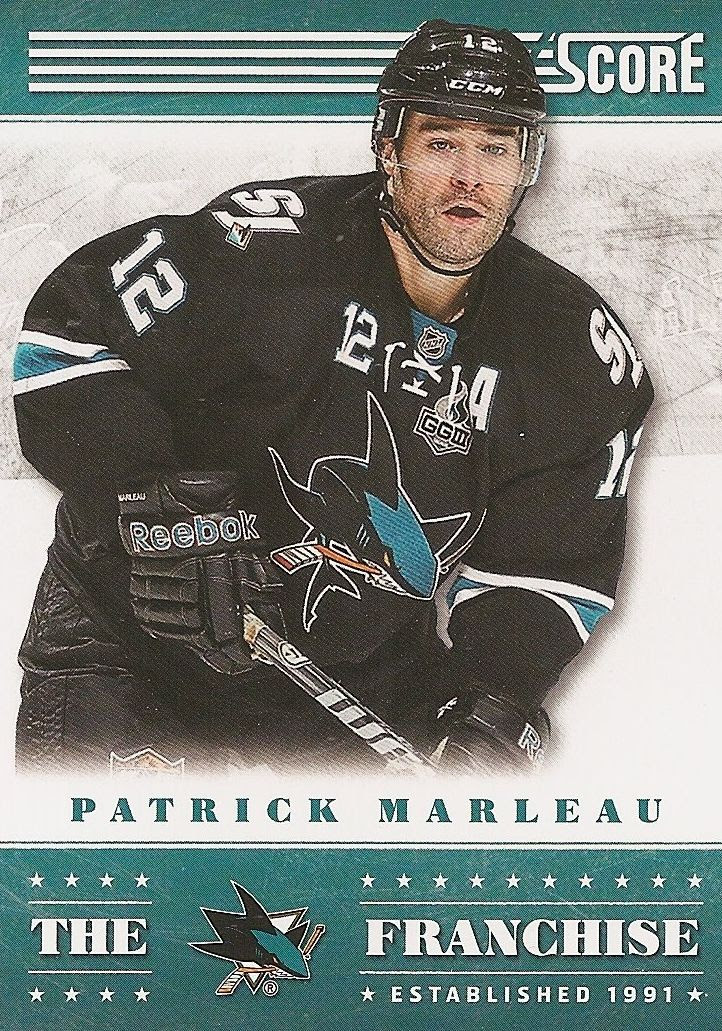 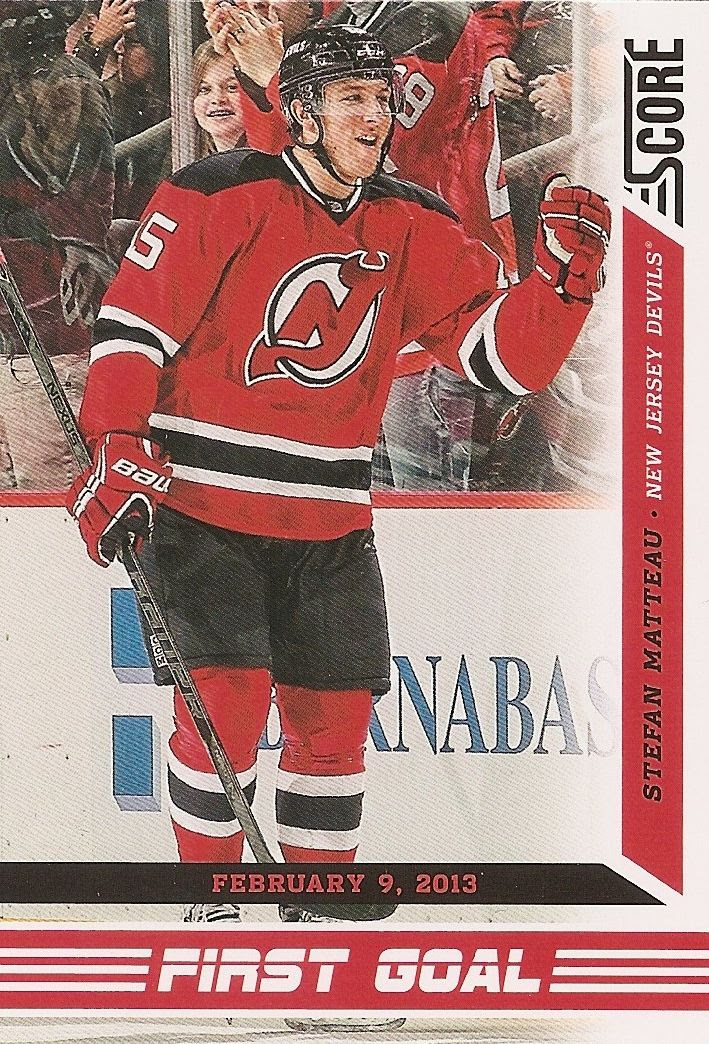 First Goal inserts give a snapshot of when an NHLer got their first goal. It includes the date and a photo of their achievement. Panini put these cards out last year... and I said I liked the concept, but not the design. This year i have to say 'ditto'. Still a cool concept, but still a design that just doesn't cut it for me! Let's try this one again next year. 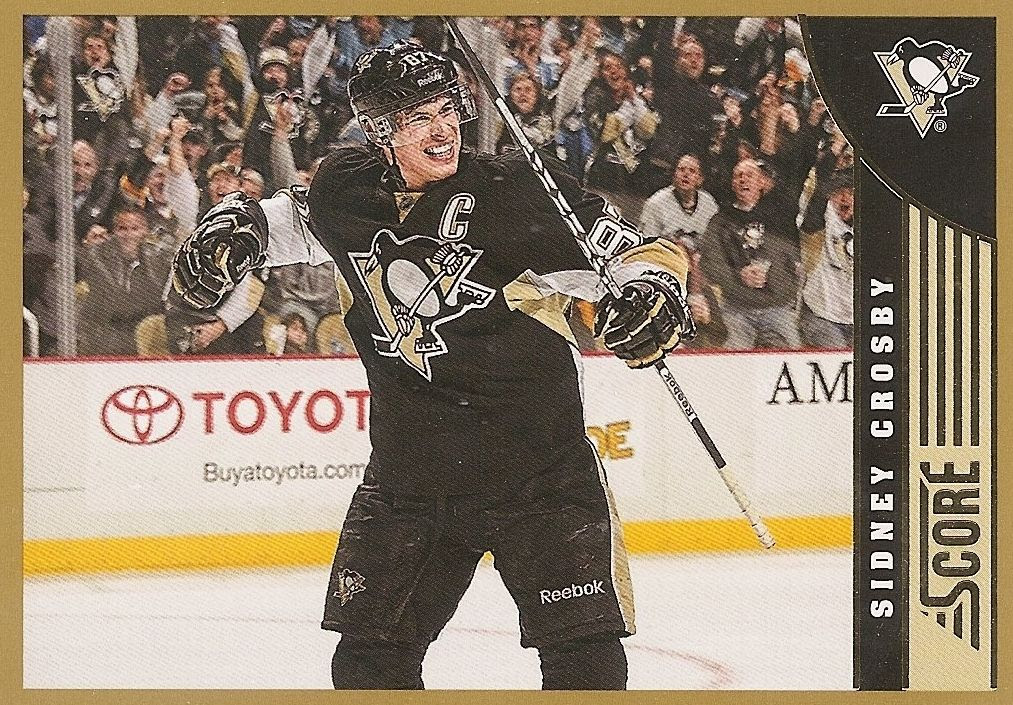 Parallel cards are abundant in Score this year. The classic gold set has made a return. The gold cards look very good with their gold border and shiny gold foil. It's a really nice looking parallel card. The gold set is a parallel set that collectors can actually pull off completing, despite the enormity of the Score base set. That's because gold cards are abundantly available. Each pack of Score jumbo contain a pile of them! It'd be a fun challenge to go for the gold. 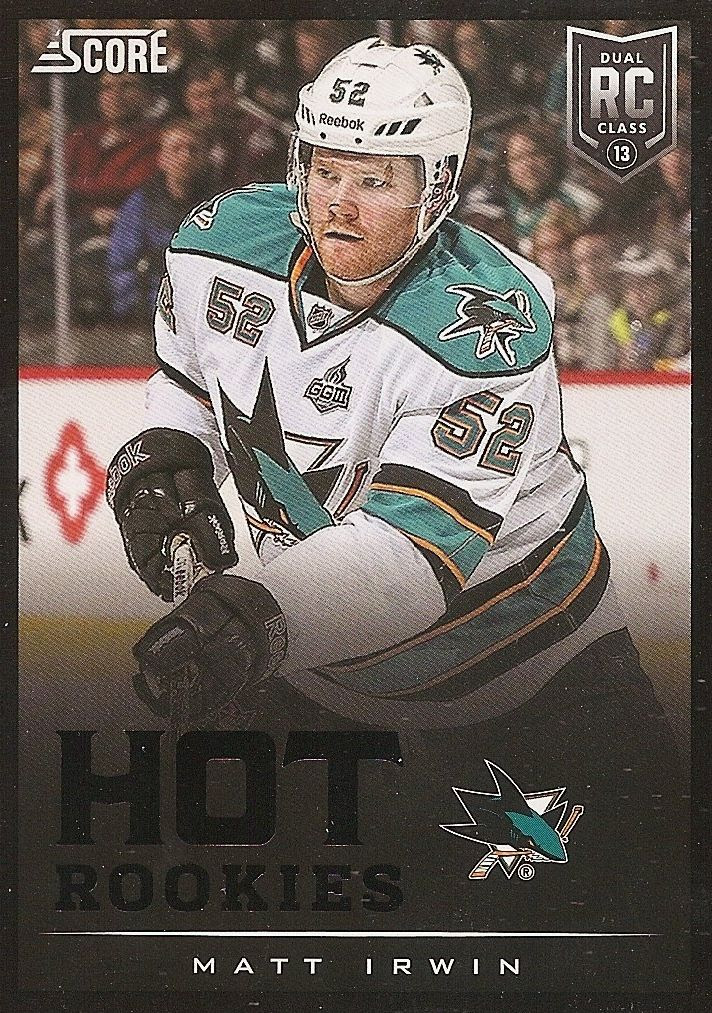 Looking even better than the gold parallels are the black ones. The black parallels give the set a mean look to it. Not only are the borders black, but so is the foil. Check out the Matt Irwin rookie above. The entire HOT ROOKIES logo is in blacked out foil - it's awesome. It's rare when I really, really like a colored parallel set. I can honestly say I really like these Hot Rookies parallels. I want to get more! 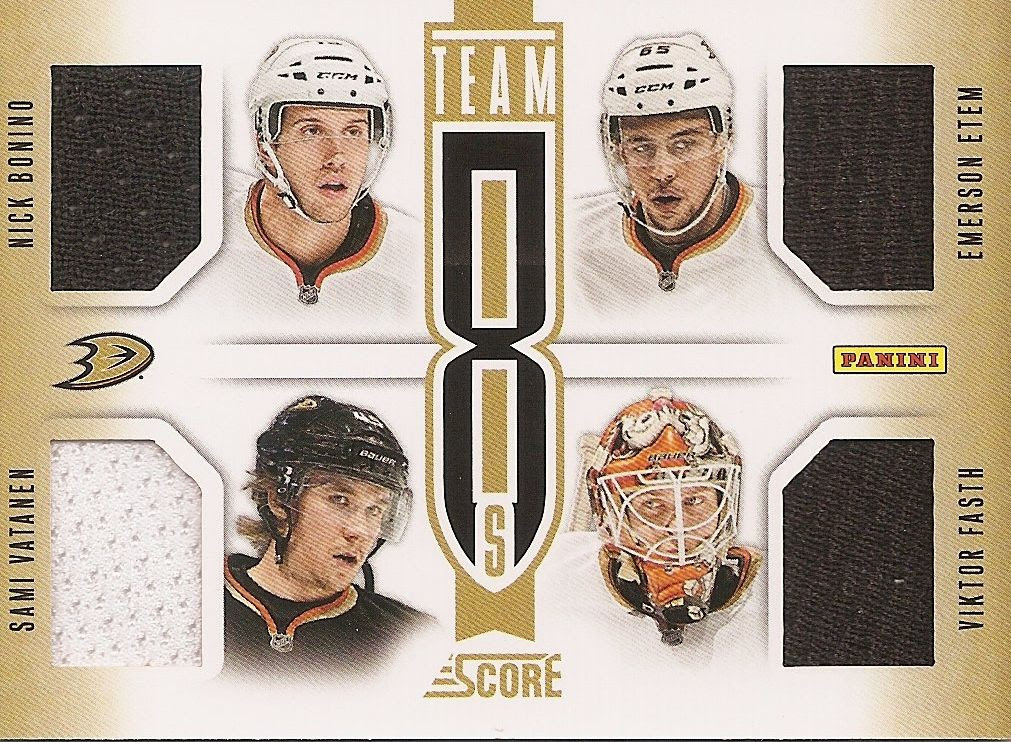 Team 8s eight-piece jersey cards are found one-per-hobby box. These thick cards have memorabilia from eight different players. Some cards feature all eight players of the same team while others have two different teams featured on each side. And still others feature four teams. There are a lot of configurations as well as print-run variety. If this were a few years ago, many collectors would have gone ga-ga over them. They are still nice cards, but the novelty of this many jerseys on a card has worn a bit. 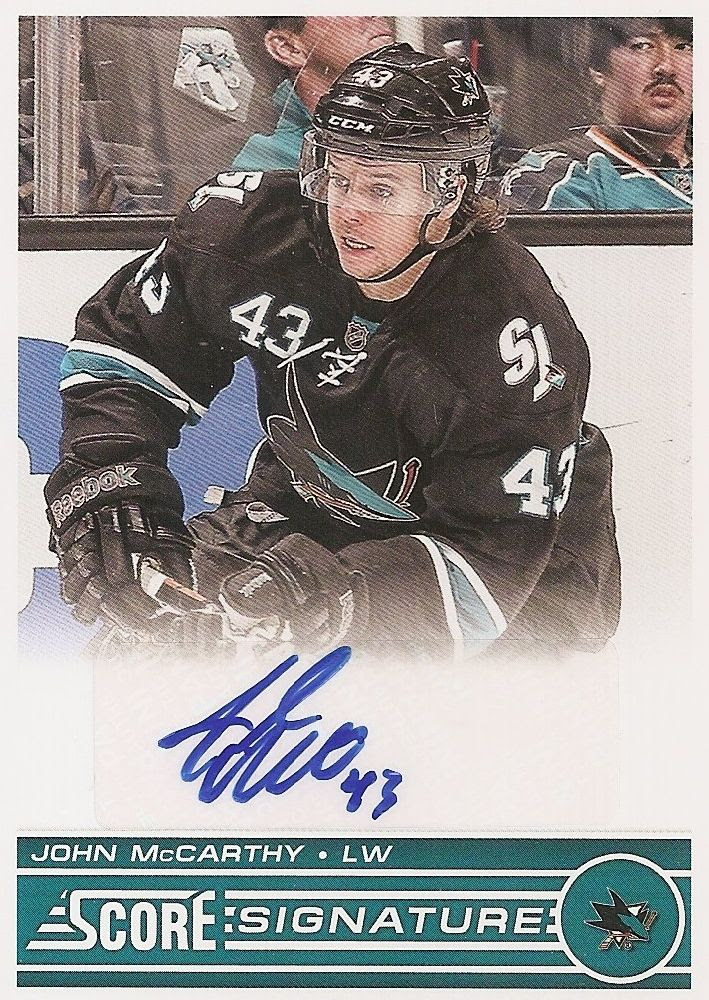 Score Signature cards come on a card that could have been a base card. Just look at it! Doesn't it look like a base card from the year 20xx? Looking at the checklist for these cards, there isn't really a huge name to get excited about. I was very happy to pull this John McCarthy... but that's only because I'm a huge Sharks fan. If you get one, you're probably only gong to want the player who plays for your team. Keep your eyes out for Pascal LeClaire and Mikael Samuelsson from this set though. They are supposedly super short-prints. 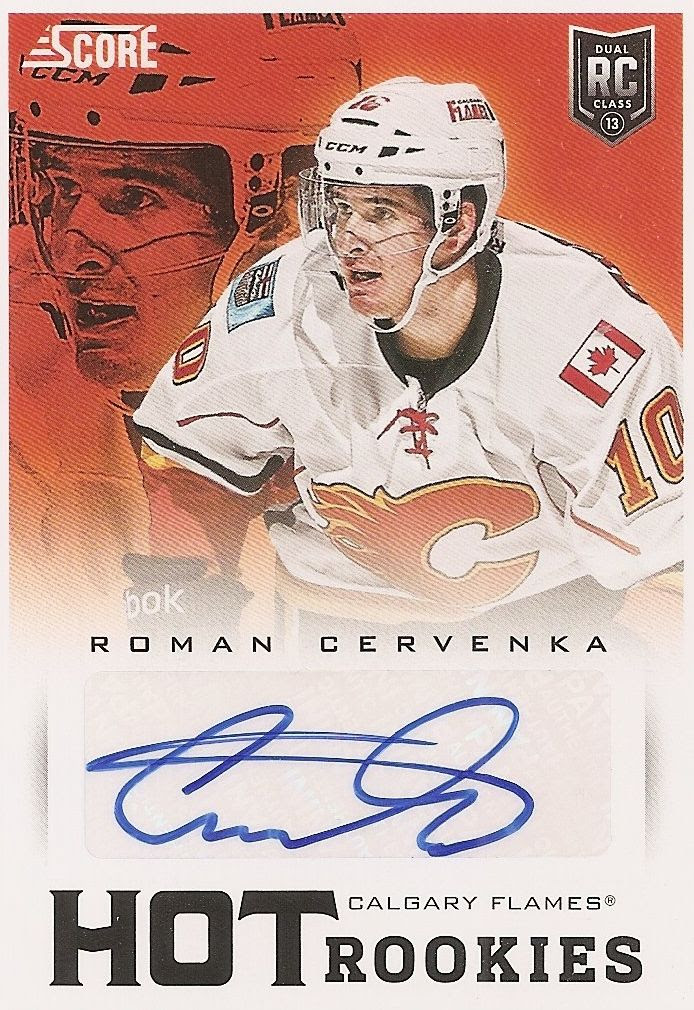 The Hot Rookie autographed cards are the ones to get when you buy Score. The Hot Rookie design has been changed from the look they had in the regular set. Now they drop the standard background and add in a silhouette of the player. It's a different look, but still a good one. Again, very clean. I'm sure collectors will be grabbing these cards up, especially the bigger names. Panini has short-printed some of these compared to others so getting the biggest names will be difficult. Guys like Yakupov, Granlund, Huberdeau, Galchenyuk, and Schultz are all short-printed.

Though I didn't get one in my box, collectors will find old Score buy back autographed cards hidden in some packs. These are very rare cards that have had big sale values in the secondary market. Future Team inserts showing the player from ice-level up are also cards that collectors can look for. Alternate backs with red printing are supposedly extremely limited in nature too. Let me know if you're able to pull any of these difficult cards!

Overall Score -
Panini has refreshed their Score line. I felt that last year's Score was very weak... but I'm glad to see it come back strong. The cards look great, and the availability of hits is a real selling point. Panini has given both collectors young and old things to find and want from 13/14 Score. Younger collectors will appreciate all the inserts and parallels that are readily available. Older collectors will enjoy chasing down the very limited alternate backs, short printed autographs, and other parallels.

I definitely recommend getting Score in any of it's forms - hobby or retail. Though there has been a slight price increase, it's not by too much. I'd definitely want to get these over the 12/13 version, though those may be cheaper. 13/14 Score brings a ton of collectibility to the table. Find yourself something to enjoy from it and go for it!