Wow, it's been twenty five years of Score football already... a very impressive tenure! With this release Panini celebrates Score's silver anniversary by giving collectors a rookie card design that they love - the '89 Score design. Panini has packed this year's Score product with a ton of things to find. Today I'll be opening up a jumbo box containing ten packs. Doesn't seem like a lot, does it? Well, it is when there are FIFTY cards per pack!!! That's right... FIFTY! They didn't skimp on filling these bad boys up. 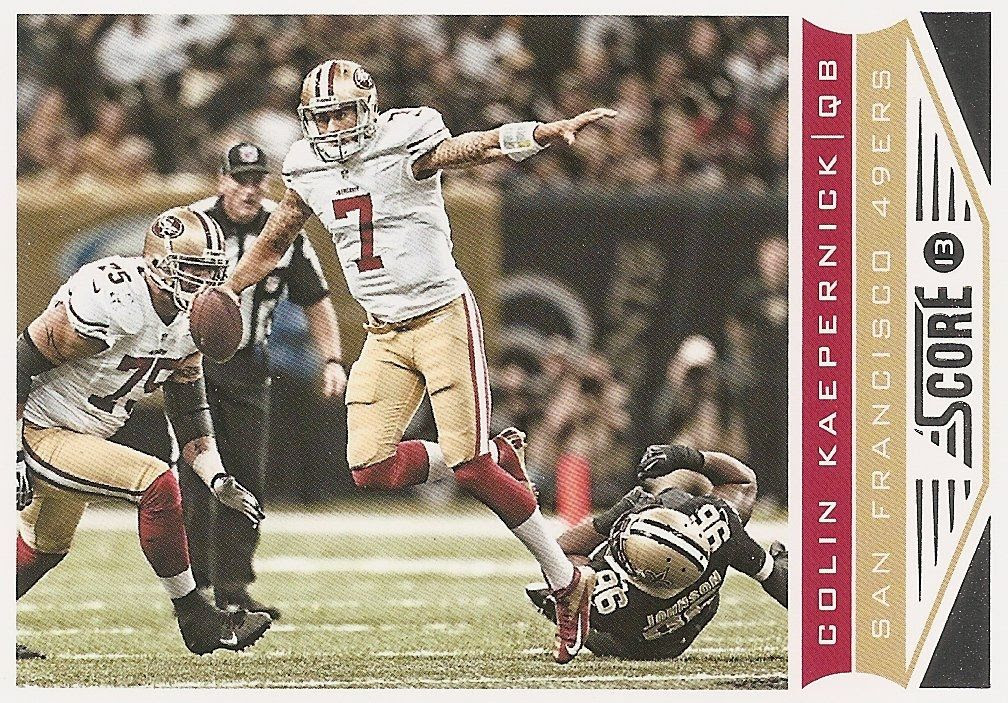 Base Card Design -
Simple, simple simple. That's what I think of when I look at the Score base cards. There really isn't much to them. You've got your standard photo, player and team name, position, and brand logo. That's it. The design is definitely no frills, but that doesn't equate to ugly or bad. It's nice and clean and pleasant in it's own way, but it's definitely not very memorable. This year's score does what a lot of lower-end cards do nowadays; it employs a white border. I miss the old days when companies used color or specially designed their borders to look different. That's what helped collectors like me identify the year a card was made. So many cards, especially in the 80's, were recognizable by their borders alone. I would love to see a return to that with these lower-end products. But obviously that's not going to happen here with 2013 Score Football.

2013 Score Football does have one thing going for it in a major way though - it's photography. I was really impressed flipping through the cards and looking at the photos. There is a great selection of unique action photos to be found. That was definitely a nice unexpected pleasure. Just check out the Colin Kaepernick shown above. That's a great shot in the middle of what looks to be an intense play. The card back continues with the theme of 'simple', but this time it's too much so. With no borders or lines, I feel like the graphics and text will somehow just fall off the card. A good word to describe the back would be 'fragile'. I need to see more going on with it, and I need to see it somehow be more together in it's design. The back just doesn't cut it for me, and I'd be happy never to turn these cards over. 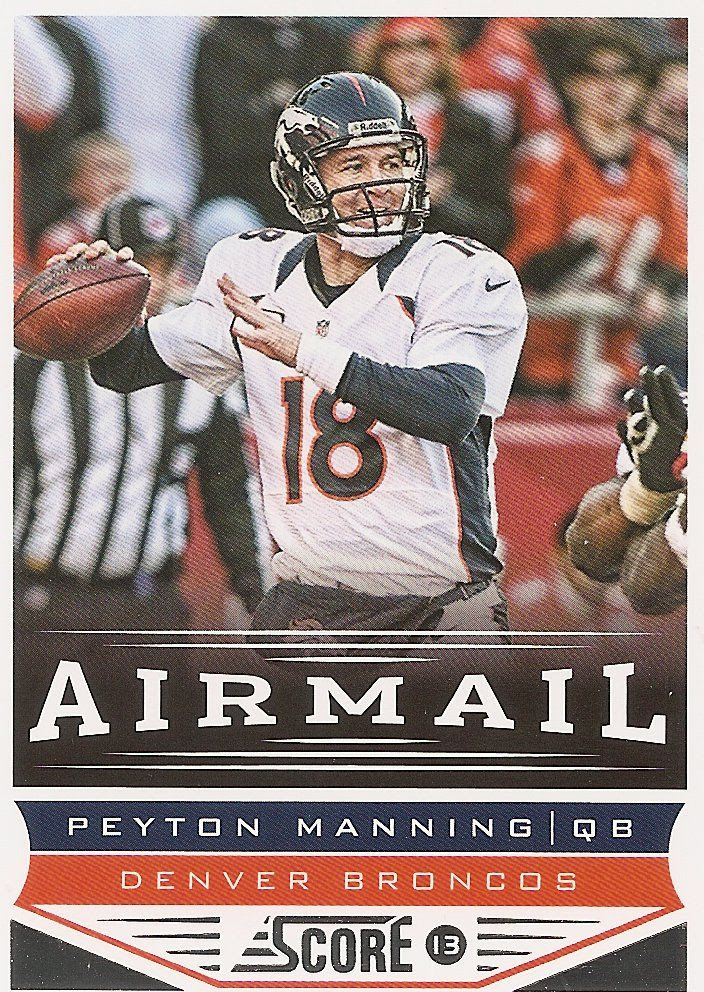 The Airmail subset is composed of quarterbacks. In the jumbo box I opened, these cards made up a portion of the cards found after the inserts. There's really not too much to say about these cards. They look like base cards except with the Airmail logo sitting atop the player's name. Score has always had subsets to go along with the base cards, but most of the time they featured a Season Highlight or some sort of award. This Airmail subset's sole purpose seems to be to give the set more cards of quarterbacks.  Not necessarily a bad thing as the most popular position is the quarterback, but it would have been nice to have a more relevant tie to the football season like cards of years past. 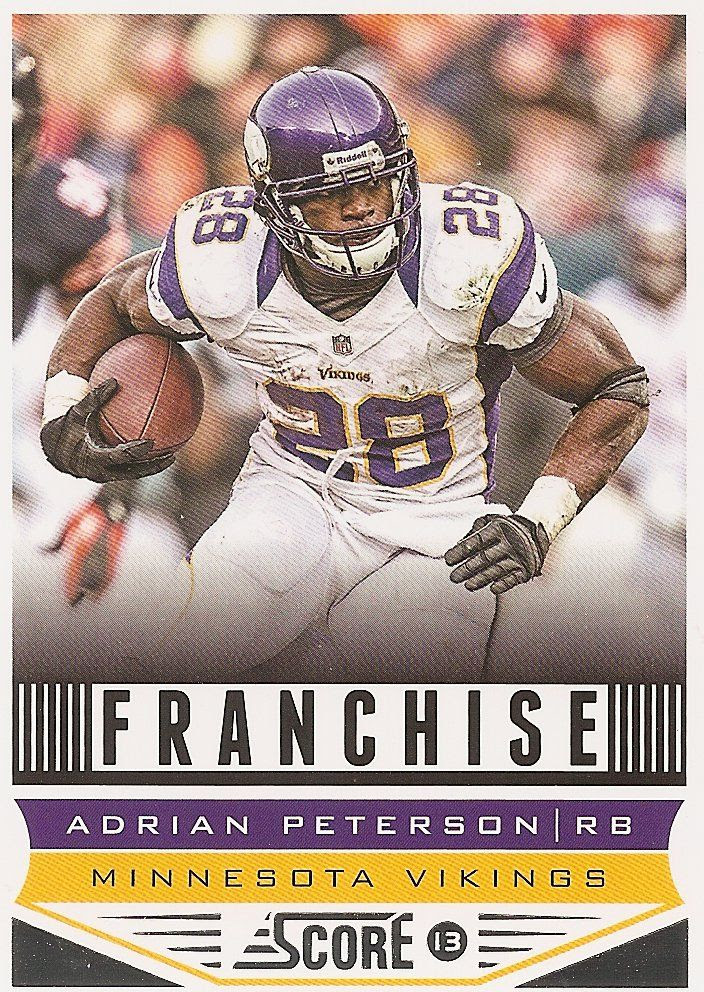 The Franchise is another subset of the main set. Like Airmail, these cards simply have a Franchise logo above the player's name. In the past, Score had Franchise insert cards that were collector favorites. These cards don't live up to those, unfortunately. I get the feeling that these cards were inserted to sneak more stars into the set. 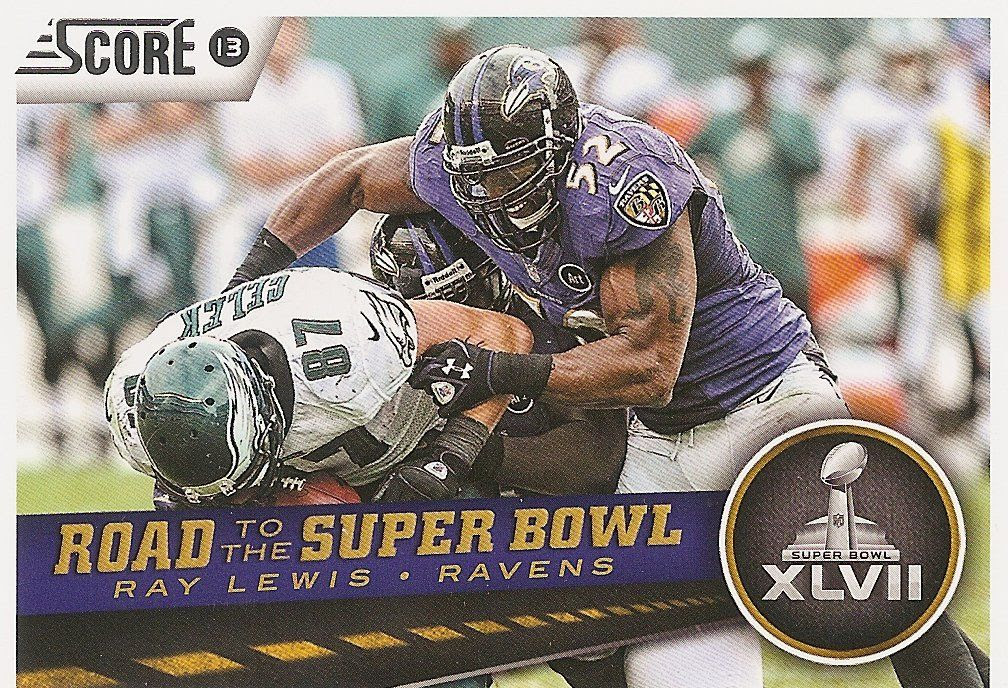 Road to the Super Bowl is a subset that definitely has relevance to football. These cards feature last season's Super Bowl champions - the Baltimore Ravens. Each card has a special logo along with the Super Bowl XLVII logo. They may not be the best looking cards, but I appreciate these more so than the Airmail and Franchise cards. I'm sure Raven fans will enjoy remembering last season's path to the title through this subset. 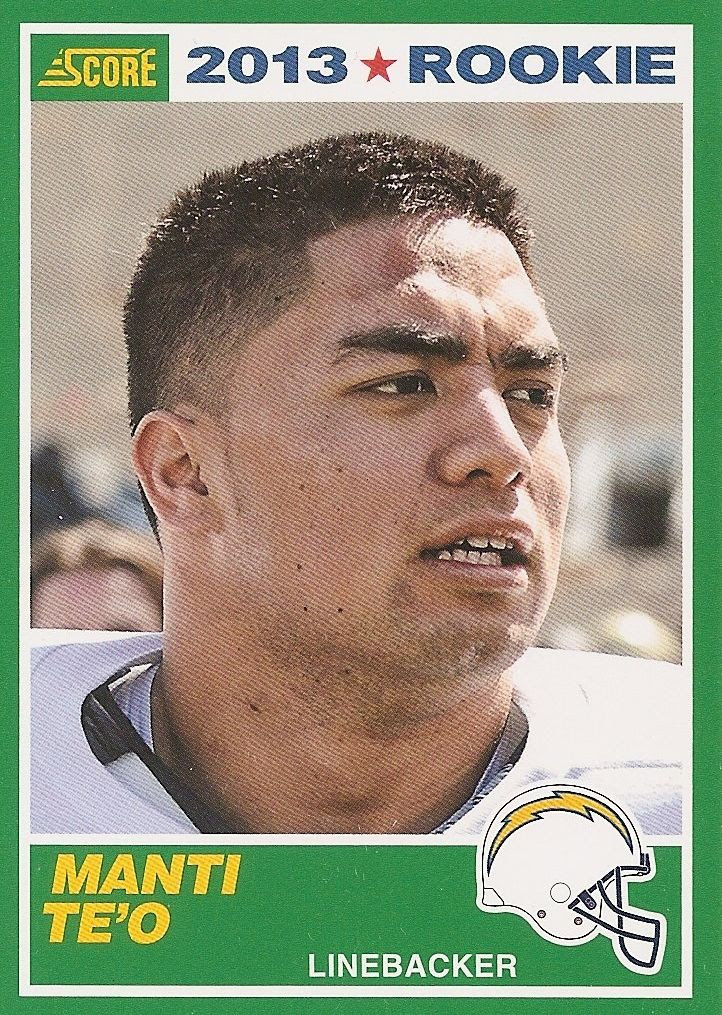 While I felt disappointment with to varying degrees with the last three subsets, I have the exact opposite feeling with the throwback '89 rookie designed cards. Panini obviously knew these would be a huge attraction for collectors as photos of these cards adorn the box. These are sweet looking rookie cards. Though the design is simple, it is bold and stands out. This design stands the test of time; a real testament to a day when companies put everything they had into one set of cards for the entire year. They had to be good, and they were. I'm very glad to see these retro rookie card design here in this set. They, for me, make this set worth buying - and they give the design score a nice little boost up!

Inserts/Game-Used/Autos -
The box states there there is one autograph or memorabilia card per box. Boxes that I have seen opened tended to have more than that. This review box from Panini had three total autographs but no memorabilia hit. Each jumbo pack opened will have the rookies, inserts, and hits sandwiched between two stacks of base cards. 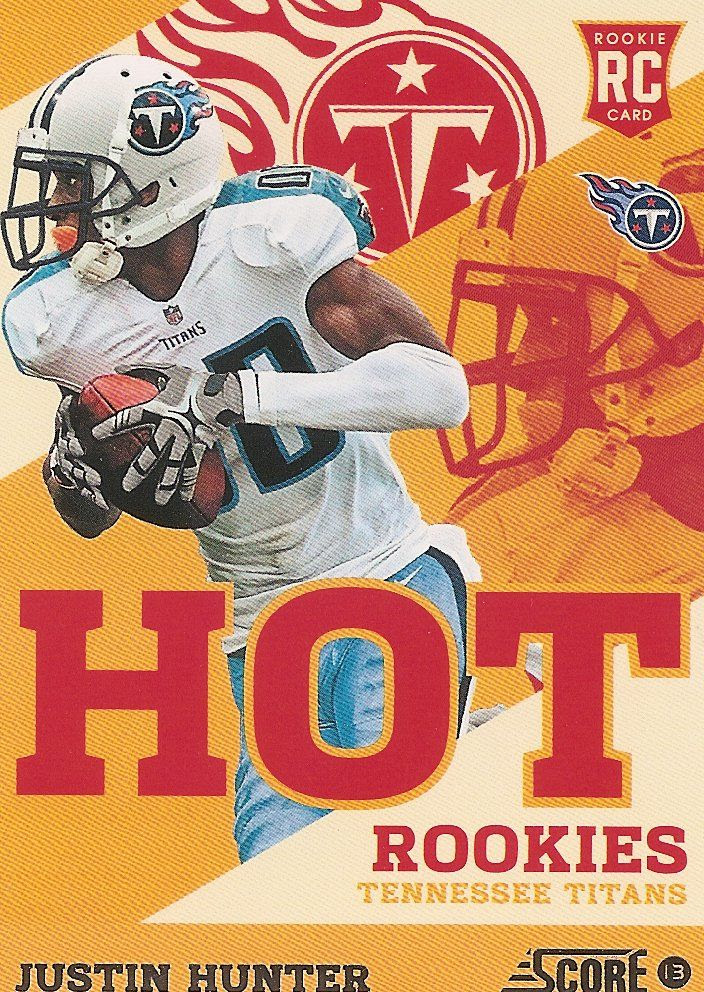 The main insert card found in 2013 Score are the Hot Rookies. These cards feature a rookie set on a red and orange graphic composed of their team logo and a close-up photo of the main photo. By itself, the card really pops and stands out nicely. Using these bold colors definitely was a shout out to insert cards of the past. I could definitely see myself pulling a card like this out of something from the 90's. My only issue with these cards happens when they are all put together. When that happens, they just turn into a big mush of orange. Perhaps using team colors instead of just orange would have differentiated the cards better. The parallel version of the Hot Rookie insert looks amazing in person. It's very difficult to tell from the scan above, but if you look closely, you can see the little grains of color that dot the card. Each dot reflects light in a different way, creating a vast field of color that sparkles on the face of the card. It's an amazing effect to see in person. This particular effect is found here on these Hot Rookies numbered to 99 as well as base card parallels also numbered to 99. 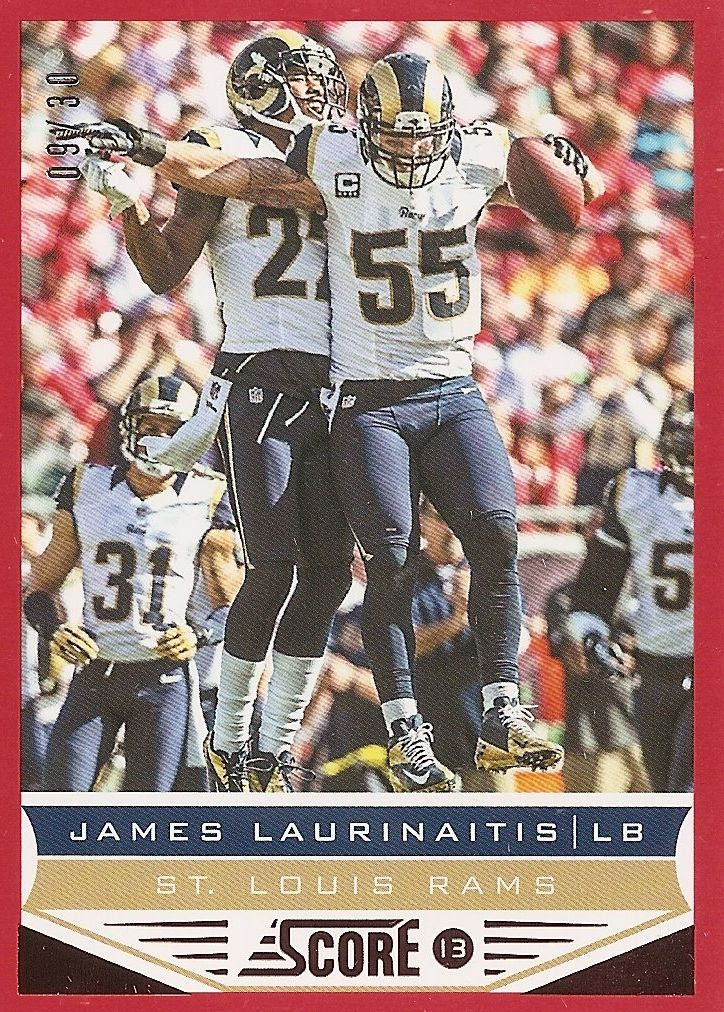 Speaking of parallel cards, there are many to be found within the Score set in a variety of different colors and printing techniques. Some parallels simply have a shinier foil while others have different border colors; and there are those with both different foil and different borders. The most limited card  in this jumbo box was a red bordered/foiled James Laurinaitis card numbered to just 30. It's surprising to find cards numbered this low in Score... but I know that there are parallels with an even lower print-run than that available for collectors to pull. 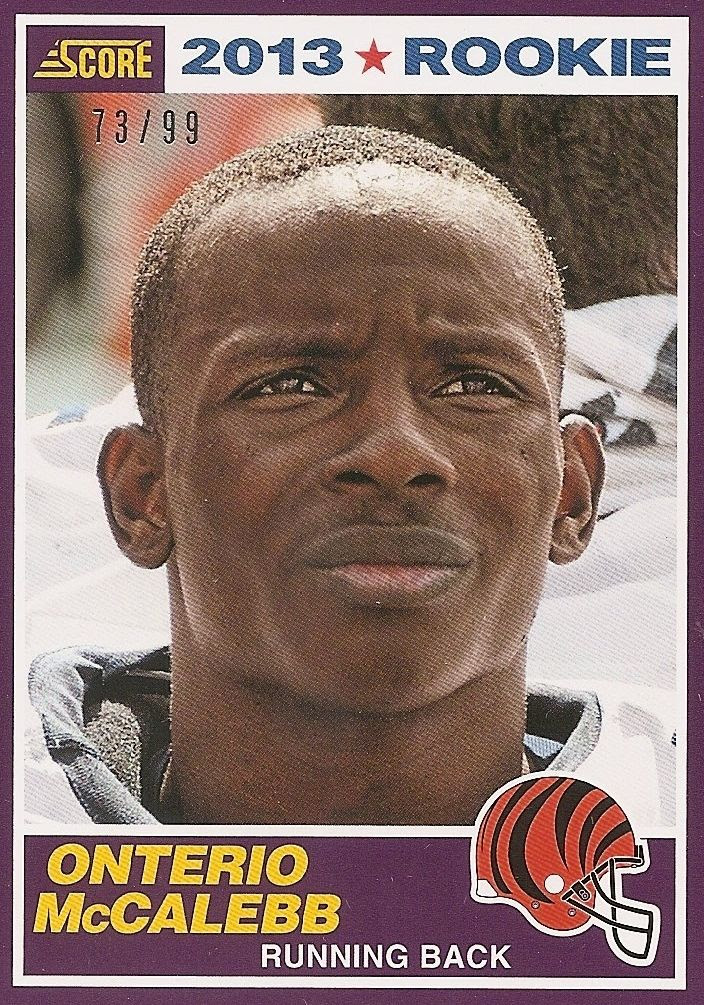 The rookie card parallels are especially exciting for me. It's awesome to see the variety of color available. How awesome would it be to have a complete rainbow of a 2013 Score rookie? It would look pretty amazing together I'm sure. 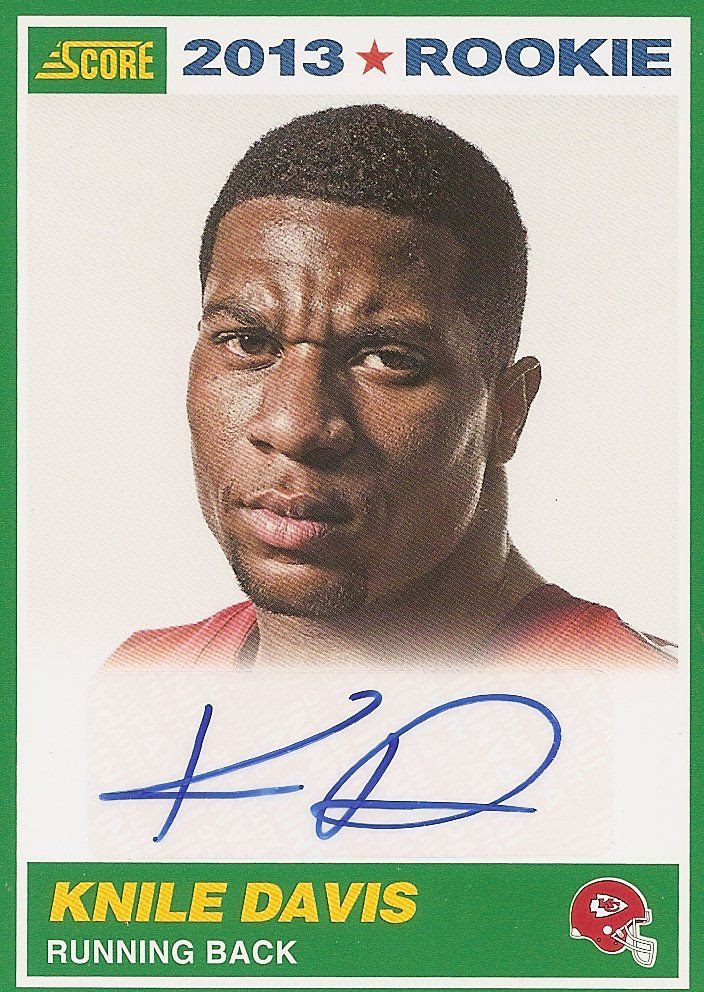 Here's what one of the rookie cards looks like with an autograph. Though it's a sticker auto, the white space that Panini leaves for it makes it look ok overall. The card design works well with an autograph on it. The standard rookie autographs are unnumbered, but there are serial numbered variations available. 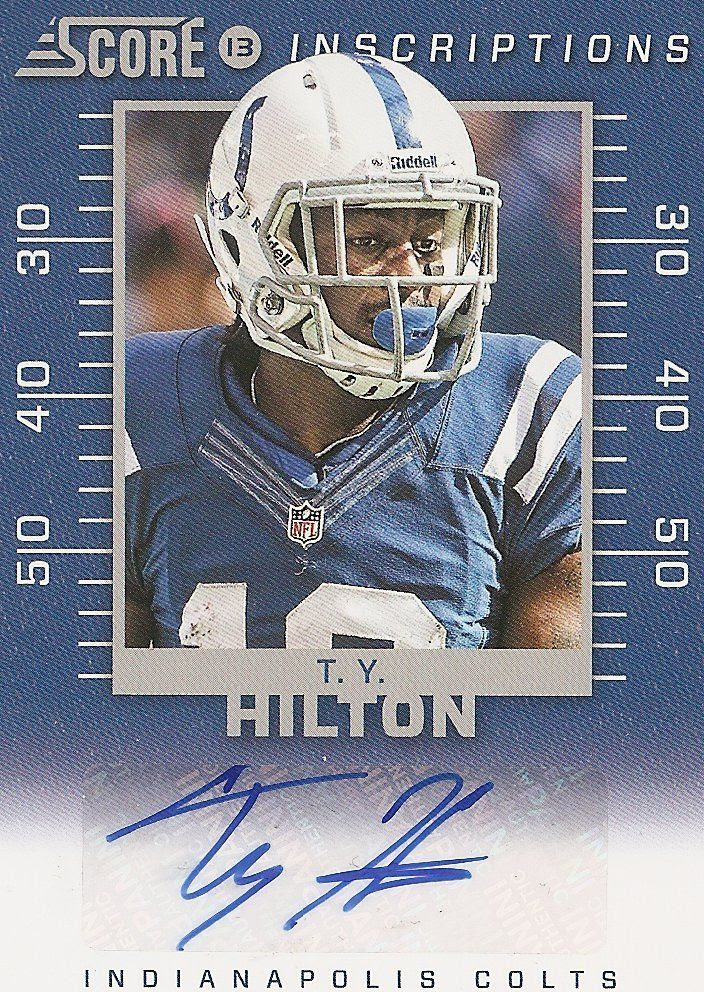 Besides the rookie autos, collectors can find Score Inscriptions like this T.Y. Hilton card. It's a very simple autograph card that uses a simple football field design nicely. This is the kind of design I think works best for Score. It's not complicated and gets the job done while still being colorful and interesting.

Surprisingly, there is a crazy ton of very nice memorabilia cards to find within boxes of 2013. I have seen breaks with tags and prime pieces of material. It looks like though Score has the outward appearance of a very low-end product, Panini has been able to sneak in some very high-powered cards to chase in it.

Overall Rating -
2013 Score is a real surprise. Though there are some elements that really fall flat, mainly with the base set, all-in-all this year's Score delivers in some amazing ways. First, Score scores a touchdown with their throwback '89 rookies. Those cards in the product make it a fun buy already. But secondly, autographs and amazing memorabilia make this a must-buy product for all collectors. There is just too much good stuff to be found in Score this year to ignore.

At under $100 per jumbo box, this is a good buy that will land you some hits as well as a ton of cards to look through and enjoy.

Panini has done a marvelous job of starting off the 2013 football card season with Score. It's the perfect product to tide you over until the new football season starts back up.

Let me know if you got anything good out of 2013 Score Football! Feel free to comment in the comments section with your thoughts on Score Football or my review of it.

Check out my box break of 2013 Score Football: