Prestige is the first mid-level football card product to come out for Panini. Collectors know that this product showcases the new rookie crop in a major way. The set is loaded with first year players cards. Though Prestige has a pretty modest price tag, it does provide some decent hit content. In year's past, Prestige has underwhelmed a bit in the design department - not really living up to its prestigious moniker. Let's see what Prestige serves up this time around. 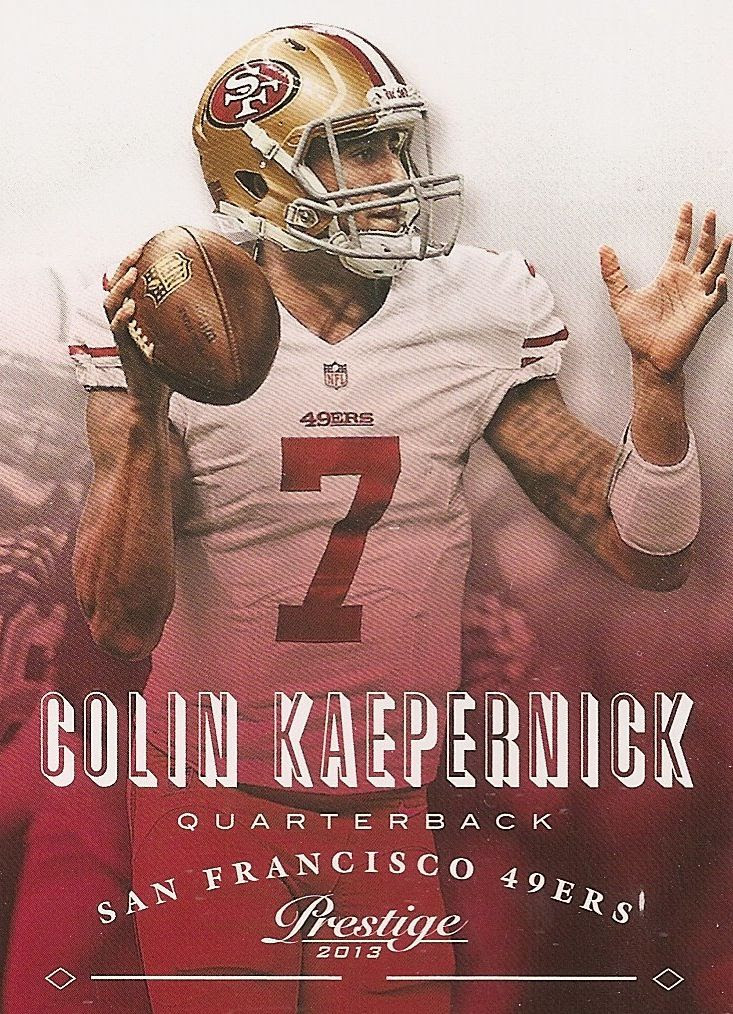 Base Card Design -
The new Prestige base cards have definitely taken a step in the right direction. I was pleasantly surprised at how refined they looked when I opened my first pack. These base cards have a tasteful look that incorporates some smart design choices. First, the player photo. Rather than a broad action shot of the player, the designers chose to focus solely on the subject of the card. The result was a larger, clearer image of the represented player. The player is in action, so there is definitely an intensity element on display; and all that intensity is distilled into the large photo - it's pretty awesome. To further focus collectors' attentions on the player, Panini has wisely ghosted out the top portion of the card and made the bottom of the card flooded with a darkened team color shadow. You can't help but to look right where these two elements meet - the center. Lastly, the fonts and graphics used are classy. They have a retro flair to them that matches well with the Prestige logo. 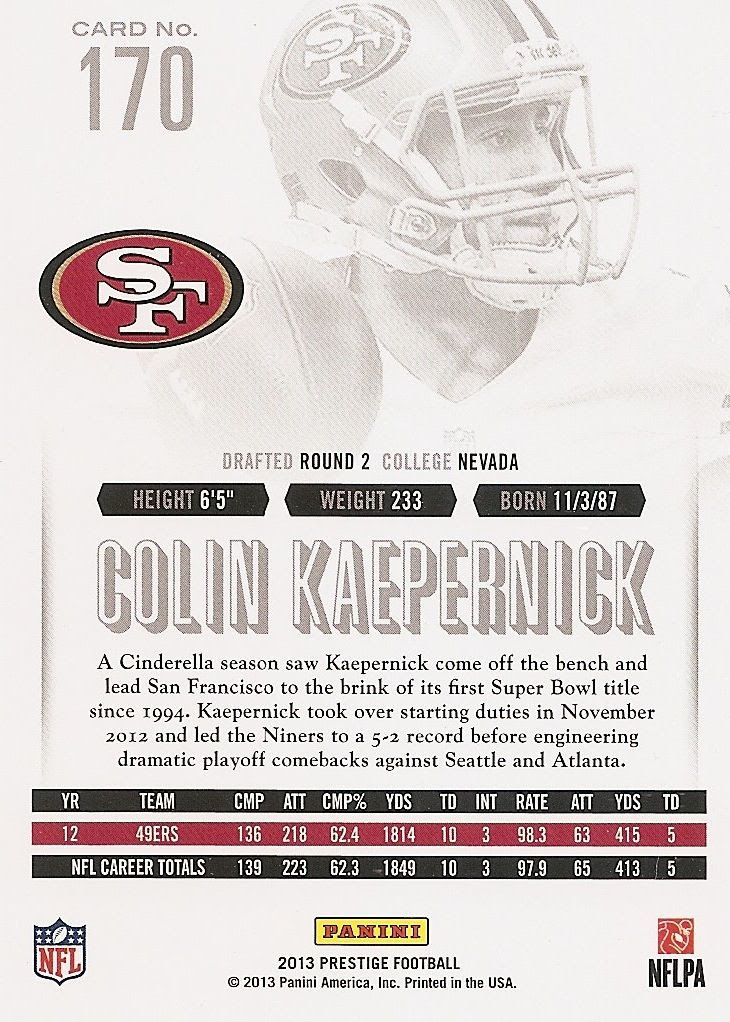 The back of the card is also a step in the positive direction for Panini. I have traditionally not been a fan of Panini's spartan, boring backs. The Prestige backs do have a touch of the old Panini 'phone-it-in' style at the very bottom, but the rest of the four-fifths of the card is great. The grayscale image of the player looks sweet on the white background, and the jumbo sized card numbering is a fun little choice. 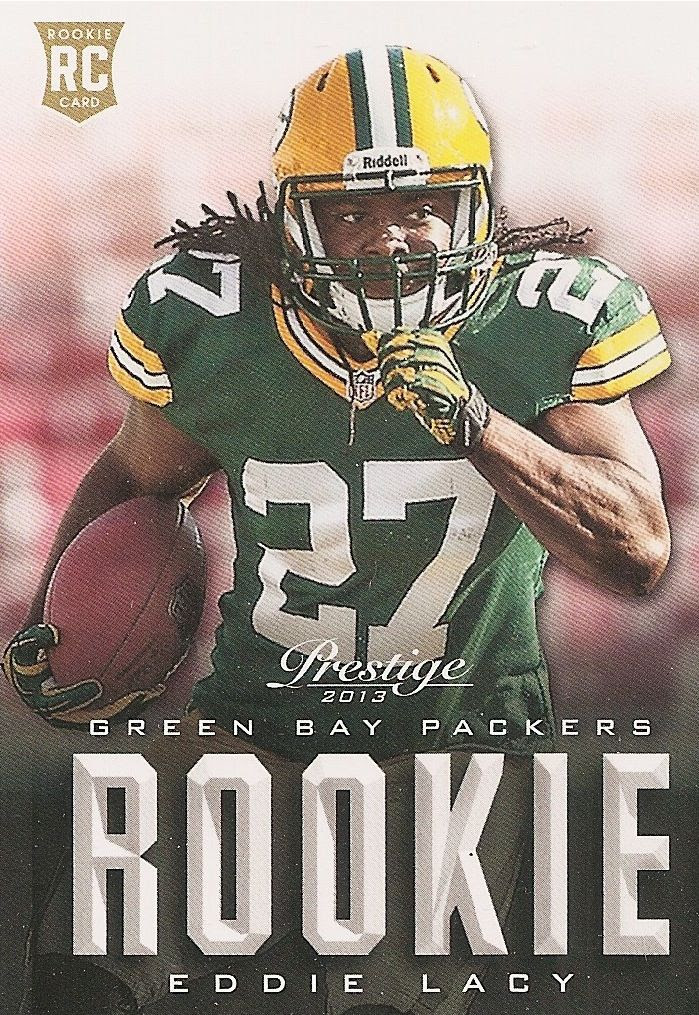 Each pack of Prestige will come with at least one rookie card in it. The rookie cards share many similar elements to the standard base cards, but are different enough that they stand out. In terms of card design, the rookie cards have that same color partition. The difference here, though, is that with the rookie card, the background has less of that whiting effect used with the base. It's almost as if the players are in a heavy fog rather than engulfed in fog. I like it; it's a nice tie to the base design. The only parts of the rookie card I have issue with are the two rookie logos. The rookie shield in the top left corner is uninspired and is visually bland. And the large rookie logo above the player's name is an eyesore. Everything else looks so tasteful, it's just too bad that the two rookie designators mar what could be a near-flawless design concept. 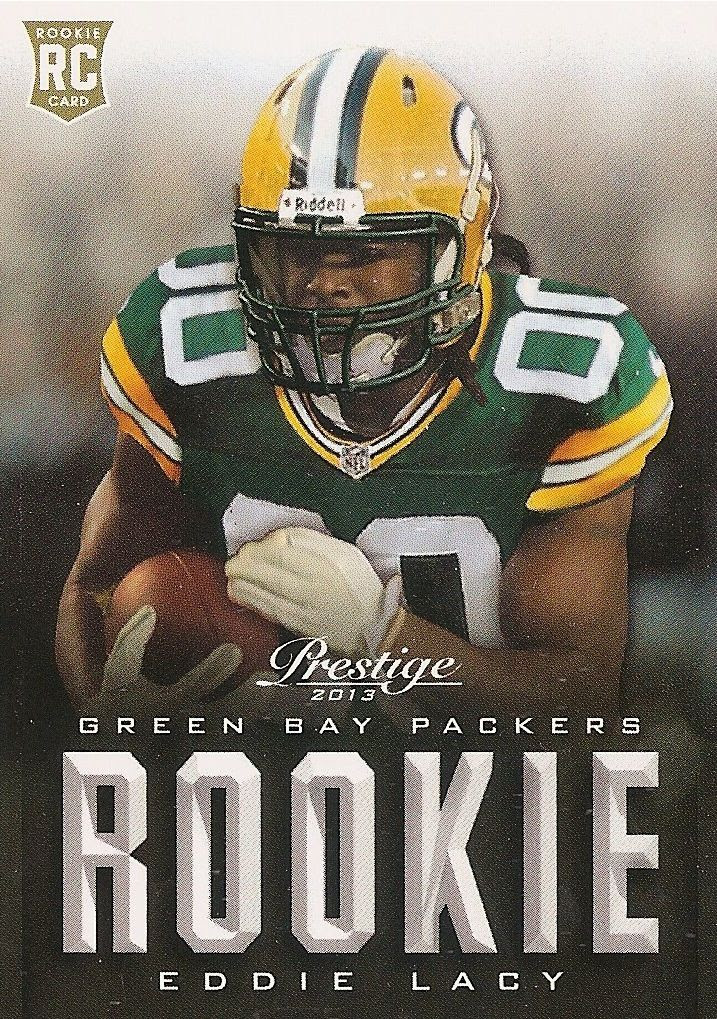 Special parallel variations exist for some rookie cards like this one of Eddie Lacy pictured above. I think this variation is pretty similar to the base rookei card, but other variants have dramatically different photos. Be careful when sorting through your cards and see if you come across these parallels.

Inserts/Game-Used/Autos -
The outside of the box promises four memorabilia or autographed cards per box. Besides hits, collectors are treated to parallel cards and inserts as well. Though the main thrust of Prestige is with the new rookie class, there are plenty of veteran hits to find as well. Overall there is a nice mix of both. 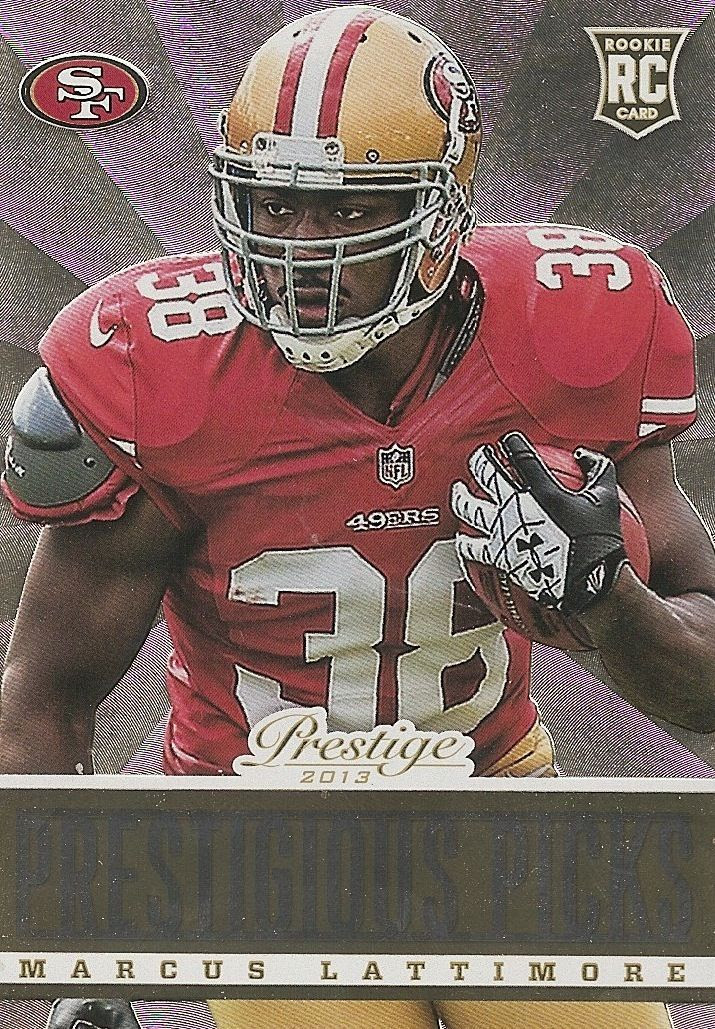 Panini has done an excellent job making use of foil in all their recent card sets. They have used it so much of it that I believe they have just about perfected the process. This Prestigious Pick foil insert of 49er Marcus Lattimore looks great (it definitely loses its mojo going through the scanner). The gold foil really shimmers, and the burst pattern in the background adds dimension to the card. You can find a few of these, along with another burst foil insert called NFL Draft Picks, inside the box. 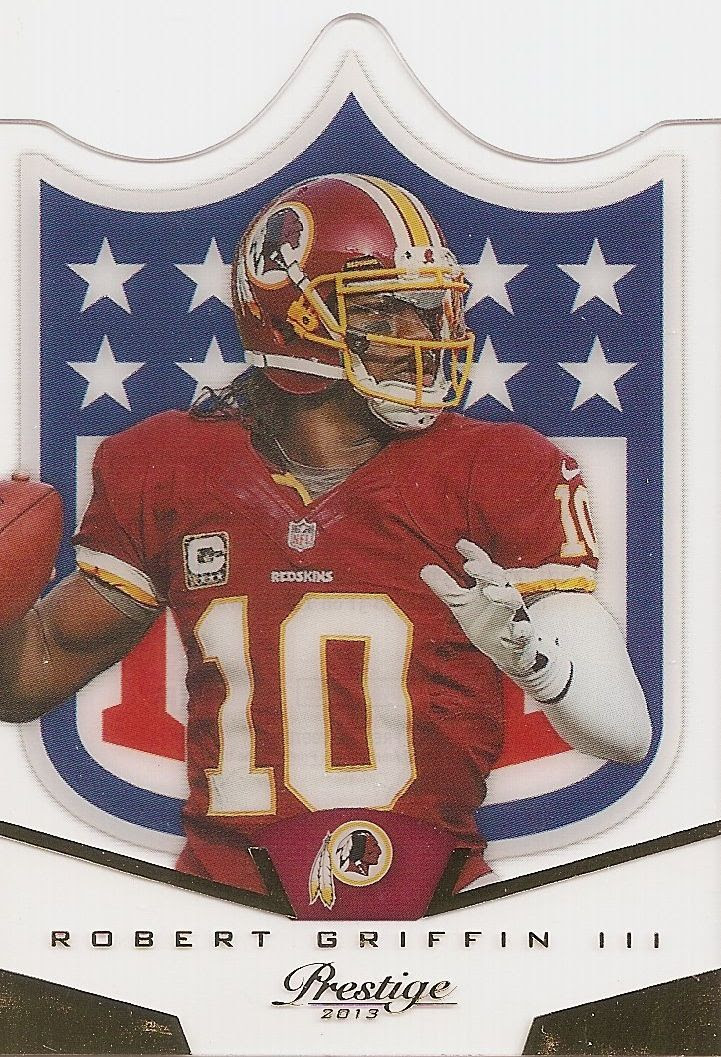 Acetate is another special form type of card that Panini has chosen to put into Prestige. My box came with two. Both were die-cut in different ways, but both looked great. If this were the early nineties, these cards would probably hold some significant value. Though they probably won't ever be big money cards, they are cards that are creative and nice additions to anyone's collection. And they still are fun cards to pull from packs. Acetate and foil cards - I still definitely have a soft spot for them in my heart! 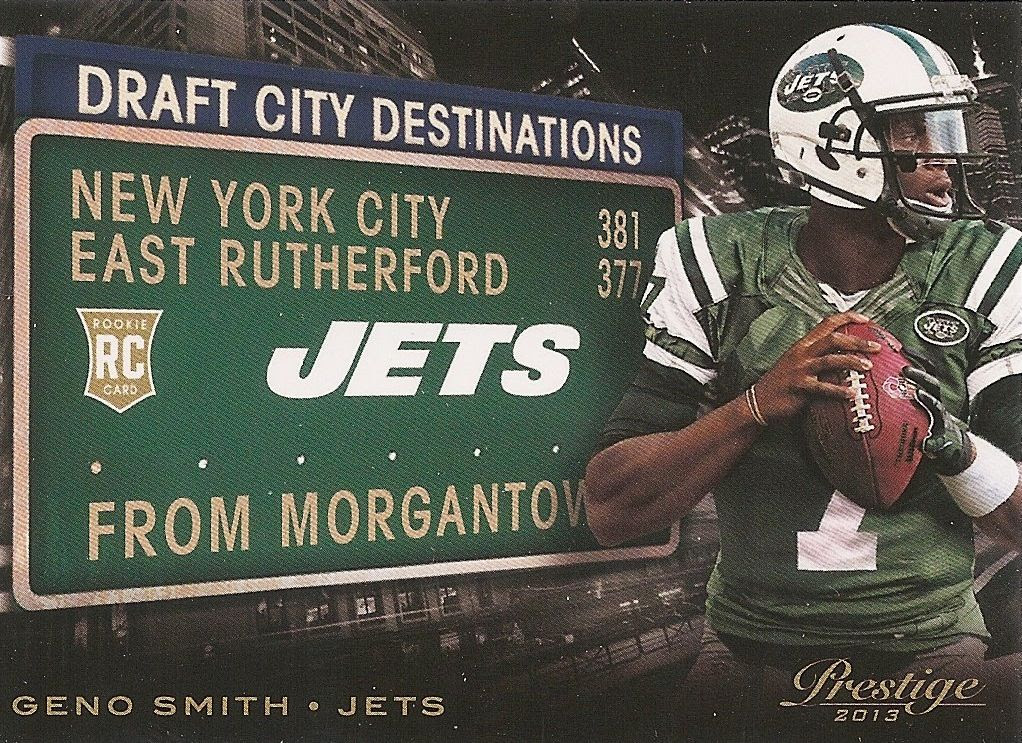 There are some 'filler' insert cards to be found like this Draft City Destinations card of Geno Smith that don't have foil, acetate, or die-cutting... and basically comes on the same stock as the base cards. These cards aren't terrible, and in fact, some present some pretty interesting nuggets of information, but because they lack those extra printing elements, they just aren't that exciting to pull. With cards like these that have no bells or whistles, there has to be some absolutely timeless design or amazing photography to hold collector interest. Anything less leaves these cards destined to be banished into the common bin, and forgotten forever. 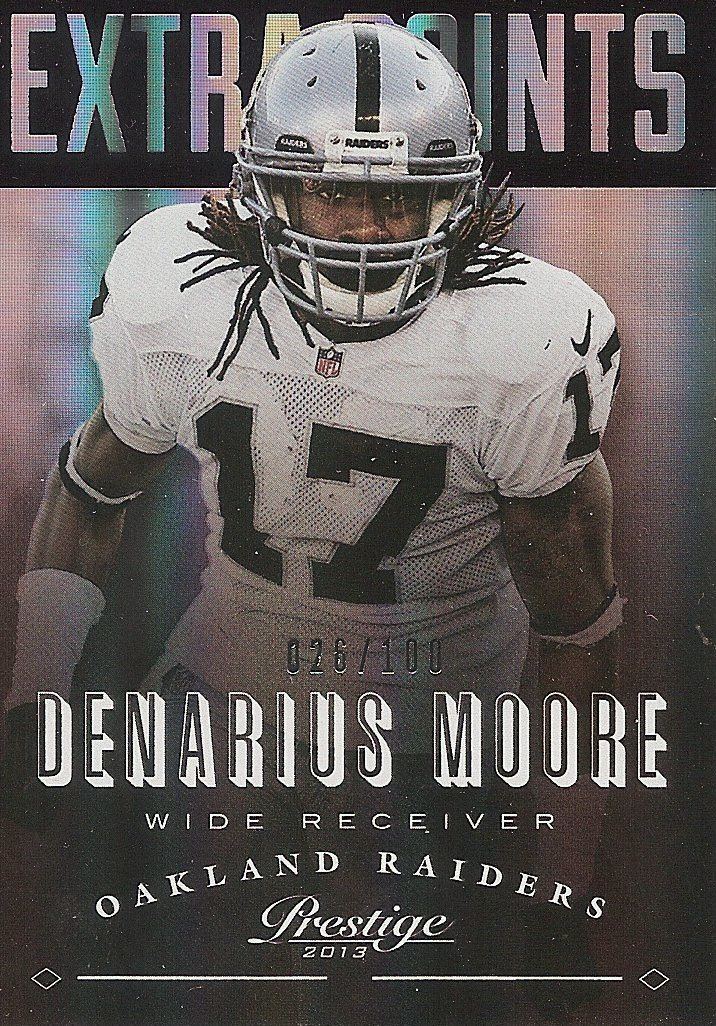 Numbered and unnumbered parallel cards can be found in Prestige. Shown above is an Extra Points parallel card numbered to just 100. Different parallel cards come with different color configurations. I really like the fact that Panini chose to foil the entire card. An entire set of Prestige in foil would look amazing, and this can be accomplished by collecting the just one of the parallel sets. The foiling used on these parallels is similar to that of Panini's Absolute brand. 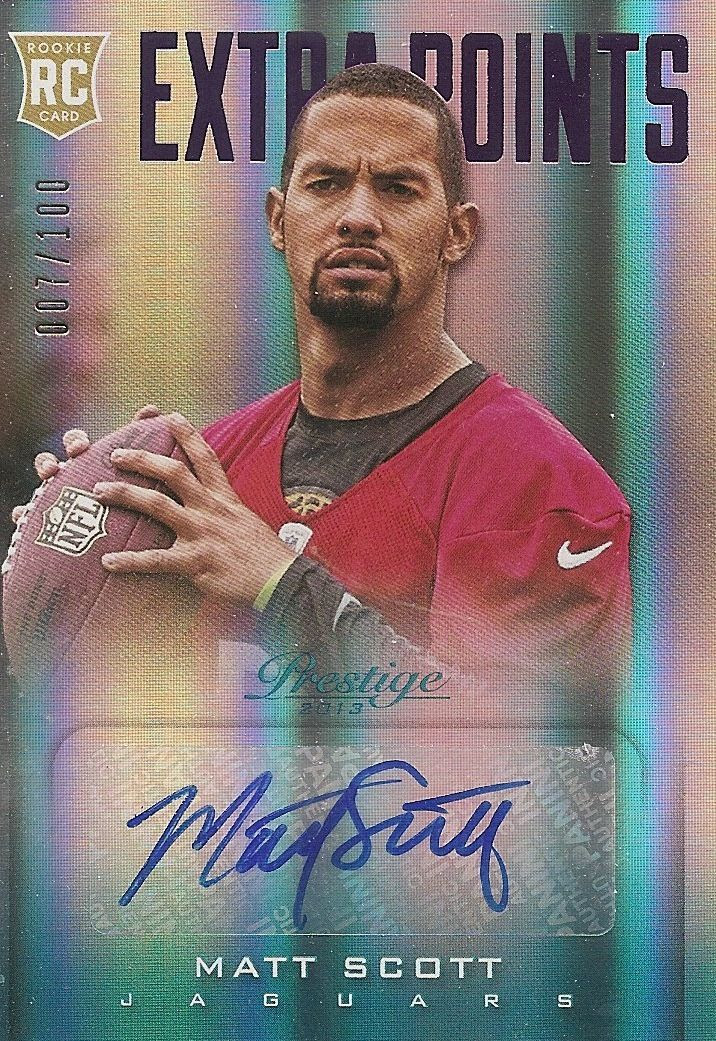 Here you can see an autographed Extra Points Parallel card of Matt Scott numbered to only 100. It's a sticker autograph, but that's about what you'd expect in a mid-end product line like Prestige. 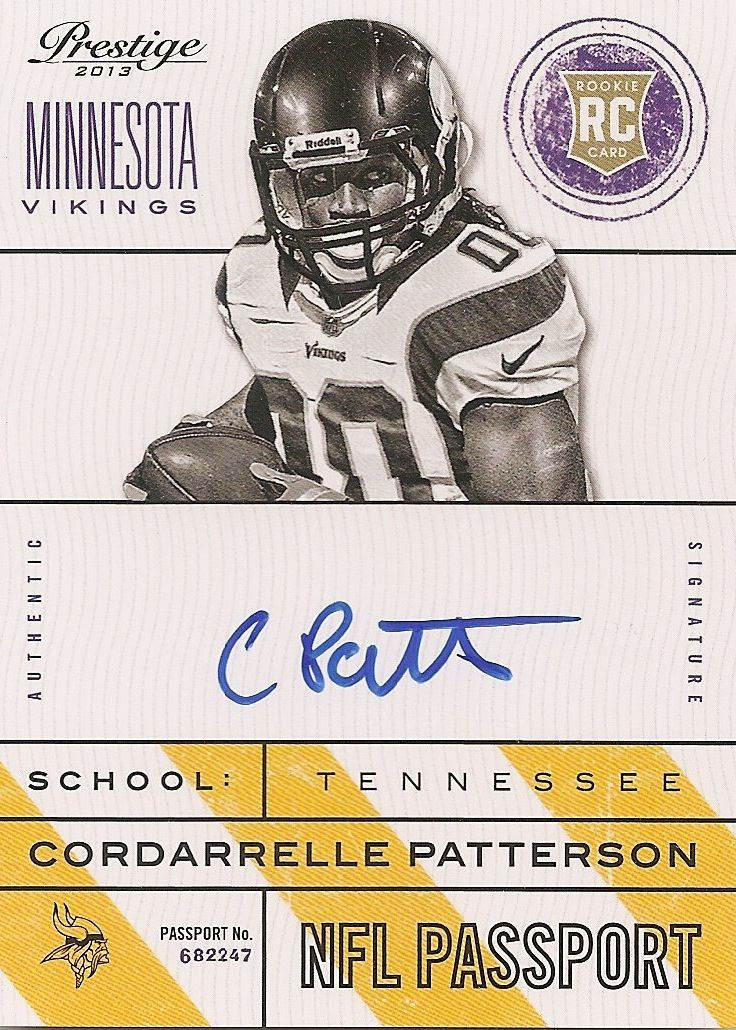 What was a bit unexpected was the availability of on-card autographs. Usually on-card autographs are reserved for higher-end products. So it's really awesome to be able to acquire on-card autos in Prestige. This autographed version of the NHL Passport insert of new Viking Cordarrelle Patterson is great. The on-card autograph paired with a visually interesting design makes this card really stand out. Panini did a really nice job with these. 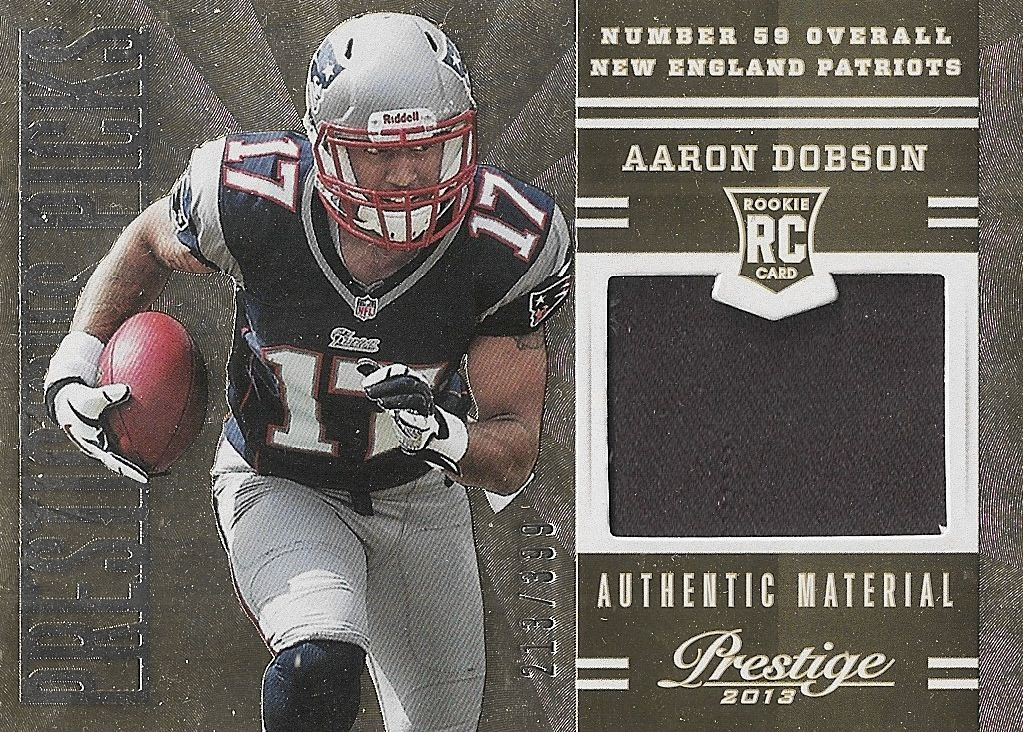 In terms of memorabilia content, the Prestigious Picks jersey cards combine foil and cloth. I remember really enjoying the foiled memorabilia card out of Panini Brilliance Basketball a little while ago. This is the same concept. It's great that Panini decided to have more all-foil memorabilia cards. It's a pairing that just isn't seen often enough. Perhaps companies think that there should only be one special treatment and not the other, but as you can see here, foiling a memorabilia card is a worthwhile idea. 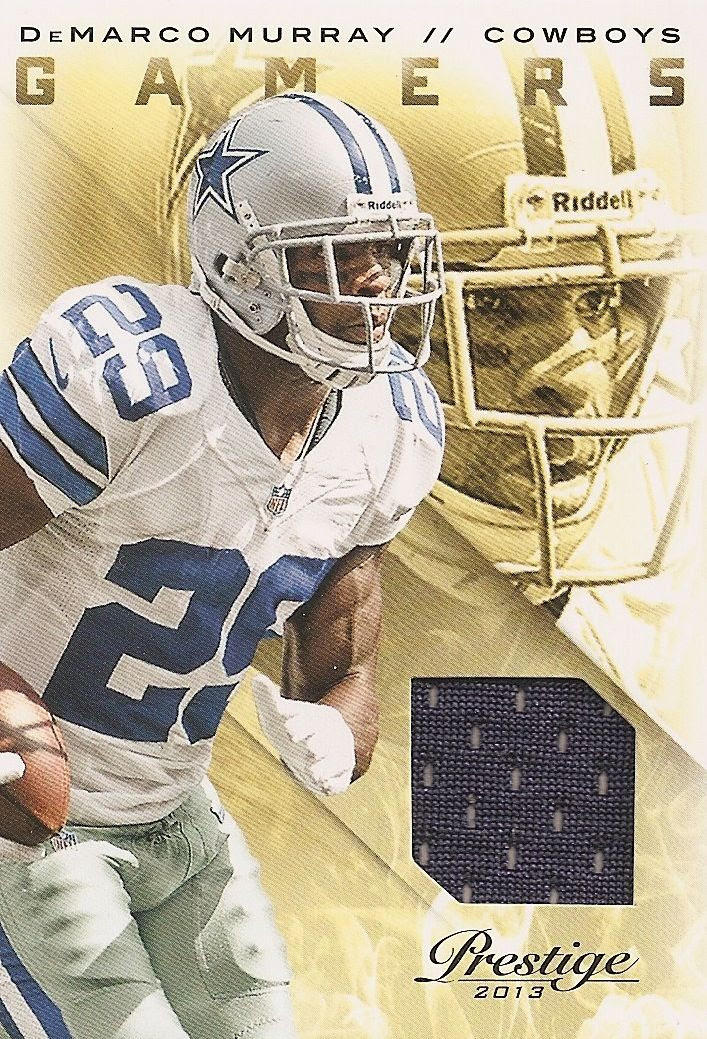 Foil isn't used for all the memorabilia cards in Prestige, so I'm glad Panini at least came up with designs that look good for the cards without it - this design isn't the standard boring, cookie cutter fare. The DeMarco Murray jersey card above shows a great deal of artistry in its design. From the sepia background to the cut of the jersey hole, this card has that extra going for it to make it stand out.

With so many inserts, parallels, printing plates, memorabilia, and autographed cards, collectors are bound to find something they like when they bust Prestige this year. In this preview box alone, there were numerous examples of well thought out cards. Collectors should be pleased.

Overall Rating -
Prestige has been a brand that I have tended to have lukewarm feelings about. It was never a huge stinker, but it wasn't very exciting either. In the past two years, Prestige has taken a strong step forward. At its price-point (under $100/box), Prestige delivers a solid value with the opportunity to nab some worthwhile cards of the new rookie class (veterans too!). I definitely think Prestige is a product worth your time if football is the sport you collect. It's also a great entry point for collectors looking to get into football card collecting.


Check out my box of 2013 Panini Prestige Football: