Products based on historical themes have been very popular in recent years. Panini adds Golden Age to these lines of products based on bygone eras. Collectors will not only find athletes in their packs, but entertainers, newsmakers, and presidents too! It's always fun to see who and what made their way into the set. Today we'll see by getting into one box of the new 2013 Panini Golden Age. 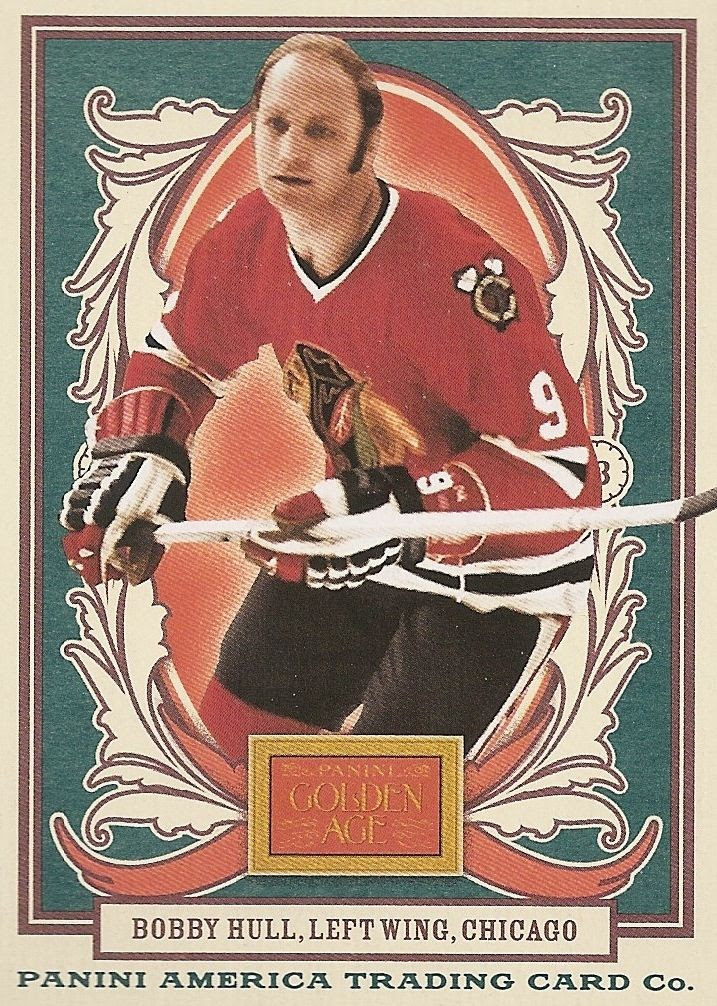 Base Card Design -
Each base card comes on non-glossy yellowed card stock. The yellowing definitely gives the cards an older, more retro feel. The colors used invoke the sense that these cards are 'older'. Each image on the card is framed in an antique looking backdrop. The look of these cards are beyond the time range of what has been coming out recently. In that I mean that card companies have traveled back to nineties, eighties, seventies, and even sixties-themed card designs. This design feels even older than that, though many of the subjects featured fall into the afore mentioned decades. Even though Panini nails the super old school look, I can't help but feel these cards aren't as dynamic as they could have been. The muted tones take away any kind of 'pop' that could have been there. This could have been rectified by glossing only the subject of the card. The mix of glossy card on cardboard would have been pretty cool. Of course, that printing technique would have probably been cost prohibitive. 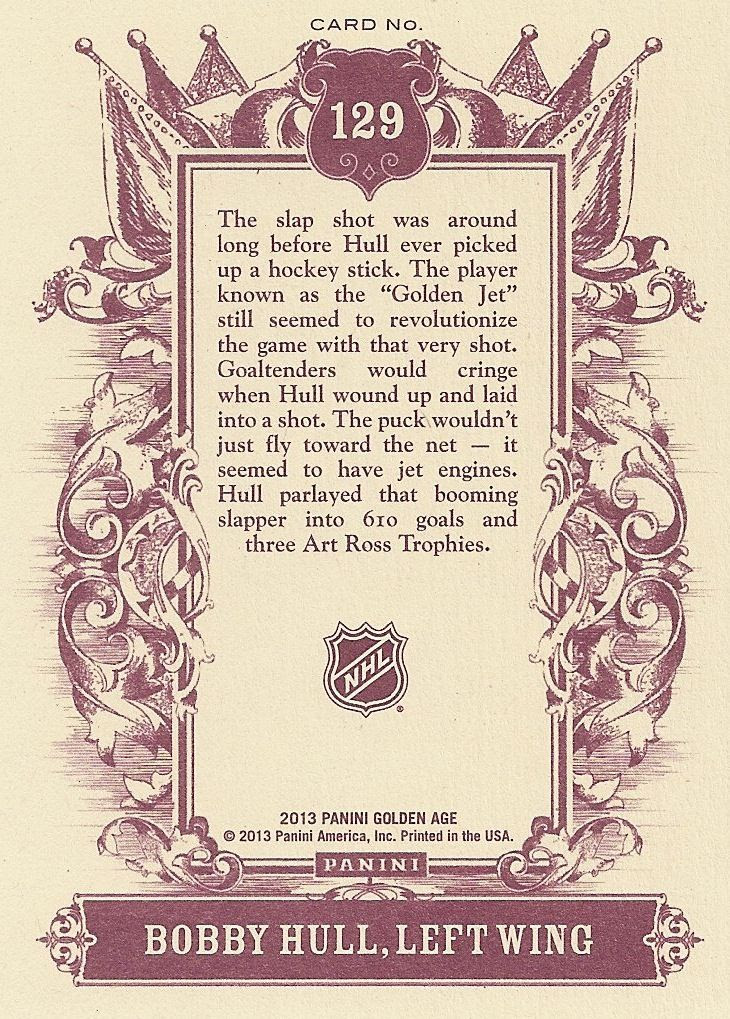 The back of the base card is more intricately designed than the front. It features paragraph about the card's subject surrounded by an artistic border. Purple ink was used for the entire back - which I think was a brilliant color choice. It's both different and retro. I have to say that this card back is spot on - one of Panini's best efforts in terms of card back design!

Inserts/Memorabilia/Autos -
Each box of Golden Age will come with an autograph and a memorabilia card. Besides the two hits, collectors can find a variety of inserts as well as parallel cards. Panini also includes a box topper card featuring an oversized picture from the golden age of America. 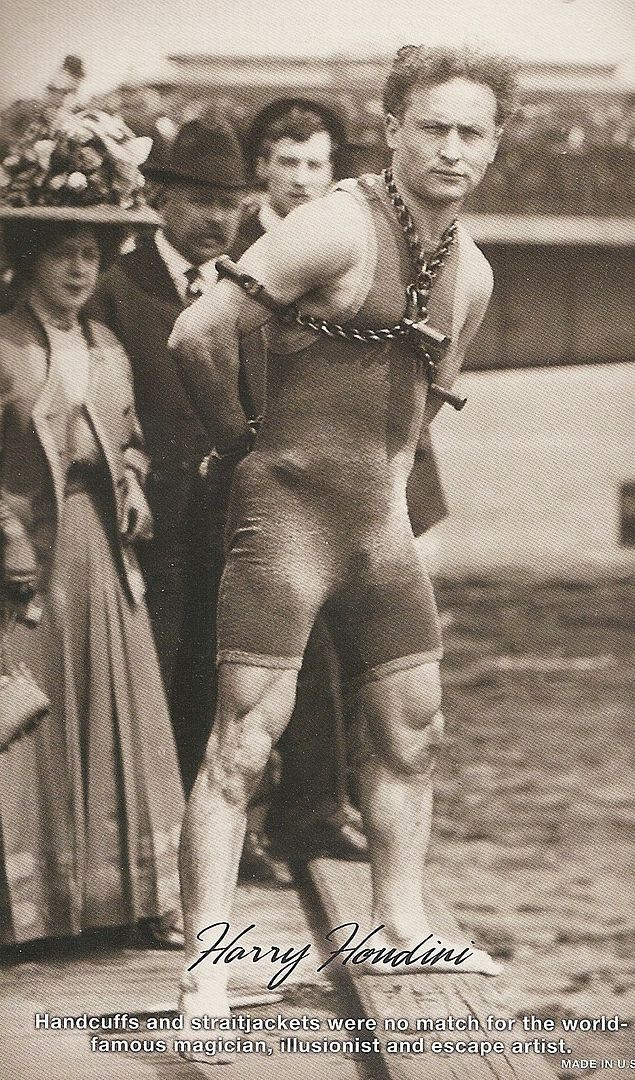 The box topper card comes in a giant copper foil pack. I really like the design of the pack, it's very elegant. The card, however, has a bit more to be desired. It's an oversized card that reminds me more of a postcard than a trading card. I suppose if you are really into this era of American history, this may be a fun set to collect. But for most collectors, I think they are just oddly shaped cards that most wouldn't know what to do with. When doing box toppers, I would prefer to see more standard card offerings. That way at least they can be stored with relative ease. I'm not sure what I'm going to do with the Harry Houdini card I pulled.

Mini card parallels that look exactly the same as the standard base card are found one-per-pack. The only difference with these are the card backs. There are a variety of card back themes in Golden Age. Like their oversized box topper cousins, mini cards can be tiresome to store and display - though card storage companies have mini card storage solutions available to collectors. 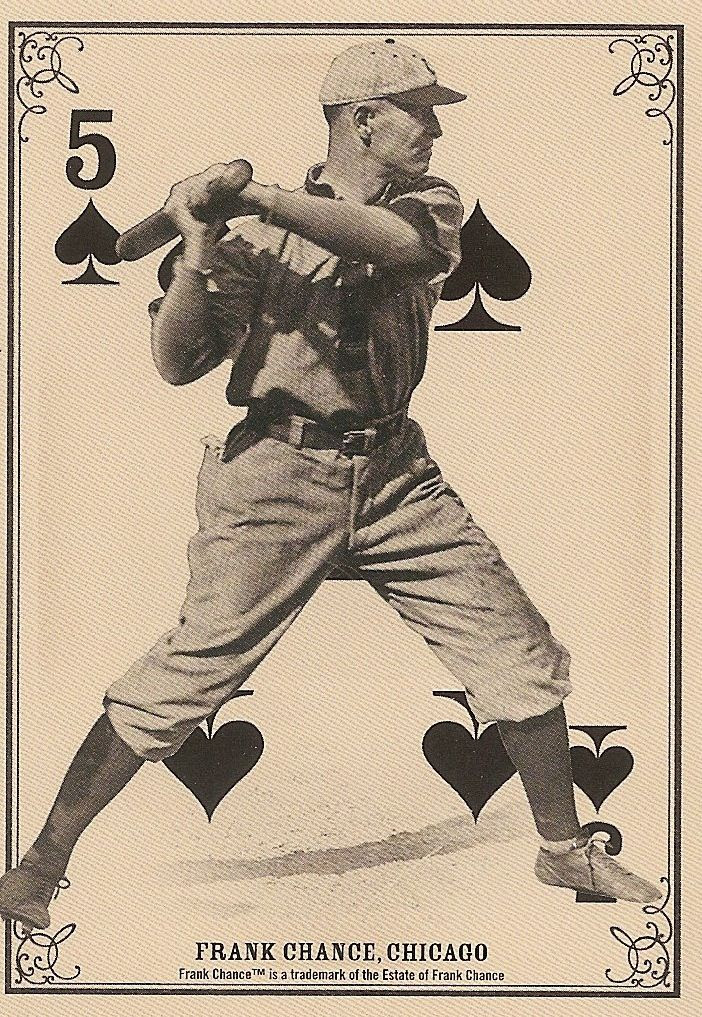 One of the more interesting insert cards to be found in Golden Age are the Playing Card inserts. There are 52 of these to be found as well as two joker cards. I guess if you collected them all you could play a game with the deck you create. The playing cards appear to come on playing card stock and have the rounded corners that standard playing cards have. The backs are all the same. In fact, the back says: Premium Playing Cards. I wonder if anyone out there will actually put the entire deck together and play a game with them. That'd be really interesting to see! 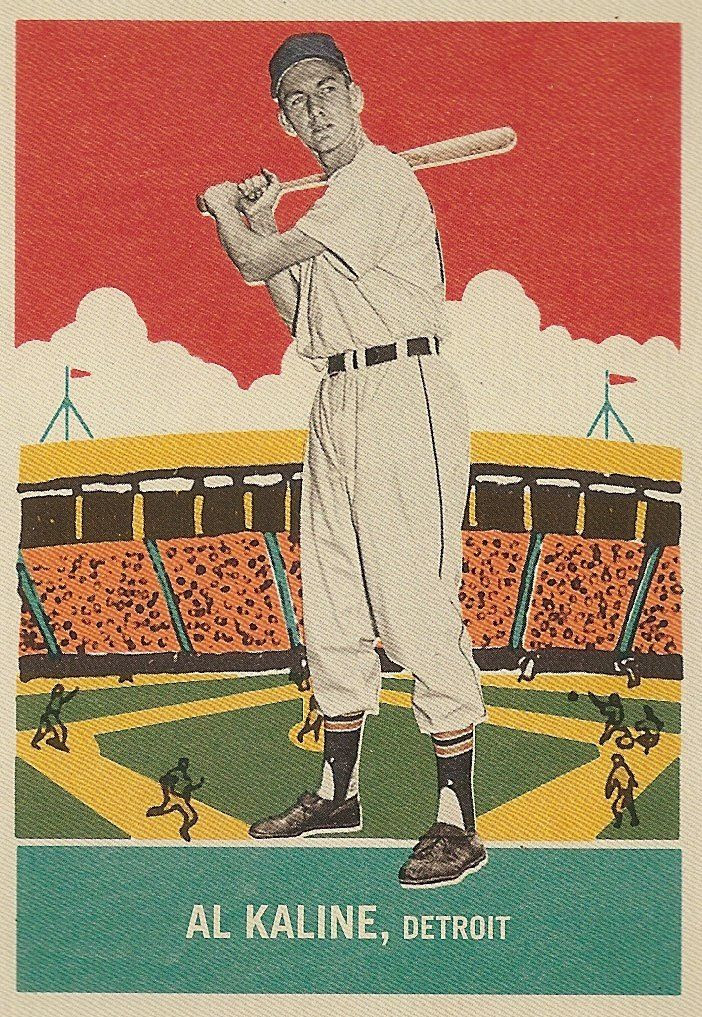 Delong Gum cards replicate what an old baseball card might look like. These simple cards are likable additions to the set. They, out of all the cards available in Golden Age, are the most sports card-like cards to be found. I particularly like the back of these cards. There is a line that says: 'PLAY BALL GUM is as pure and as fine quality as any made - contains real chicle.' I want to try some Delong Gum now! 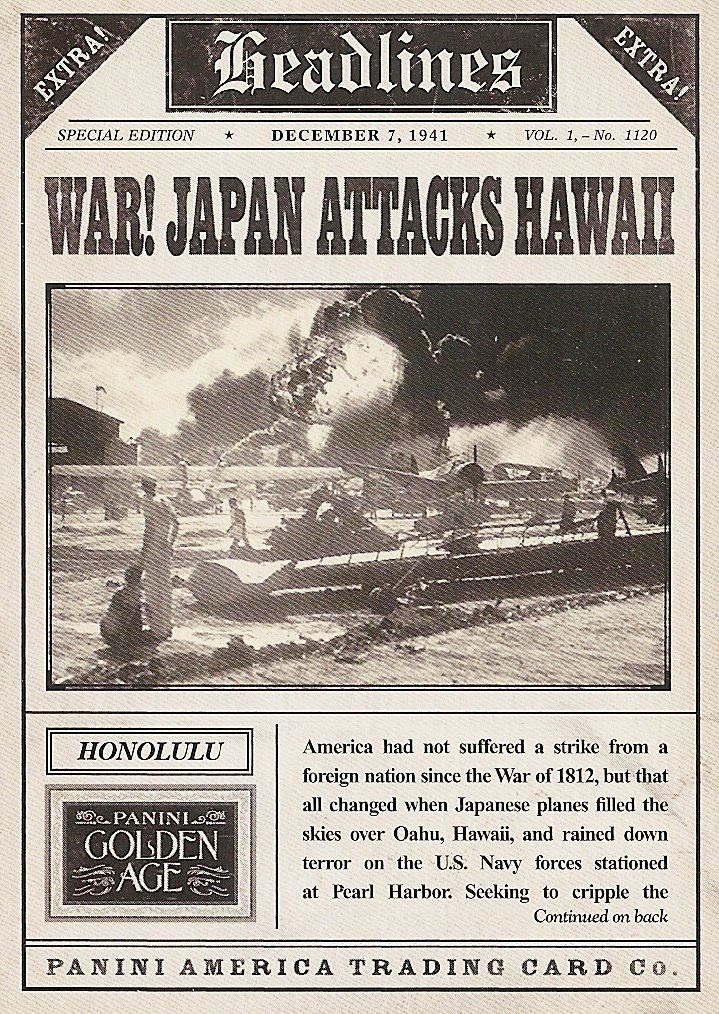 The Headlines insert set is designed to look like a newspaper. Do young collectors even know what newspapers are anymore? Hah! I'm sure they do... but in the near future... who knows! They'll be asking why in the heck this card looks the way it does. I've seen newspaper cards done before; and I've always found that because of the nature of the format, the picture used is always a bit too small, as is the print. It is a fun way to signify important events on a card though. Maybe in the future, rather than a newspaper, cards will feature web-browser designs. You heard it here first! 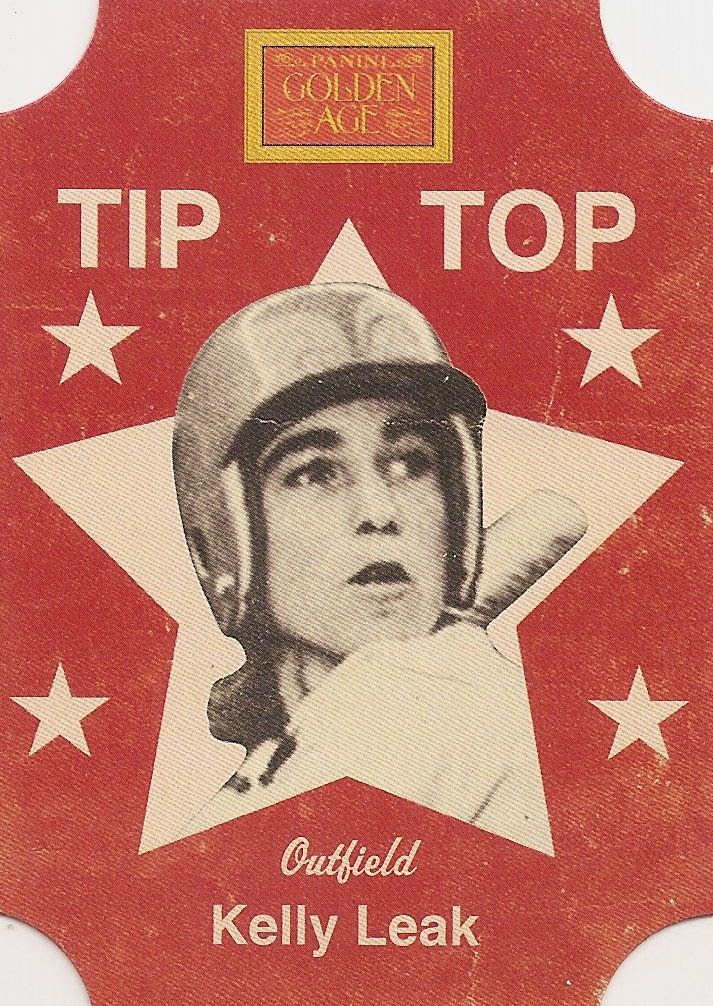 This Kelly Leak card is part of the Tip Top Bread Label die-cut set. These cards share the same die-cut shape as the Bread for Energy insert set. If they look familiar to you, Panini used the exact same thing in last year's Past & Present basketball card set. As simple as these cards look on the front, the backs are even more so; they just have a word or a phrase in a field of empty space. 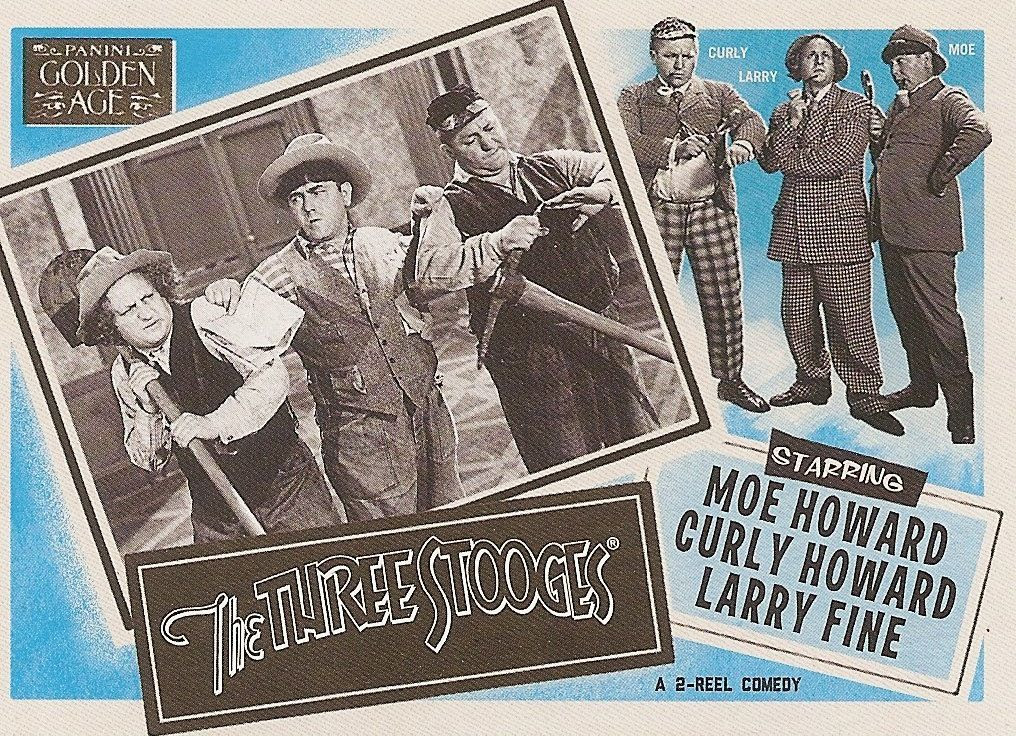 The Three Stooges get their own little insert set in Golden Age. The Stooges have a huge fan following, but as time goes by, I wonder if their popularity will remain high. Fans of the Stooges will enjoy this insert set though. Panini used a black & white and blue color scheme on the card I pulled. Not only did they color the front, the back is done in the same way. That's great to see because I would have expected just a plain black & white back. Good on Panini for doing a little extra on these Stooges inserts. 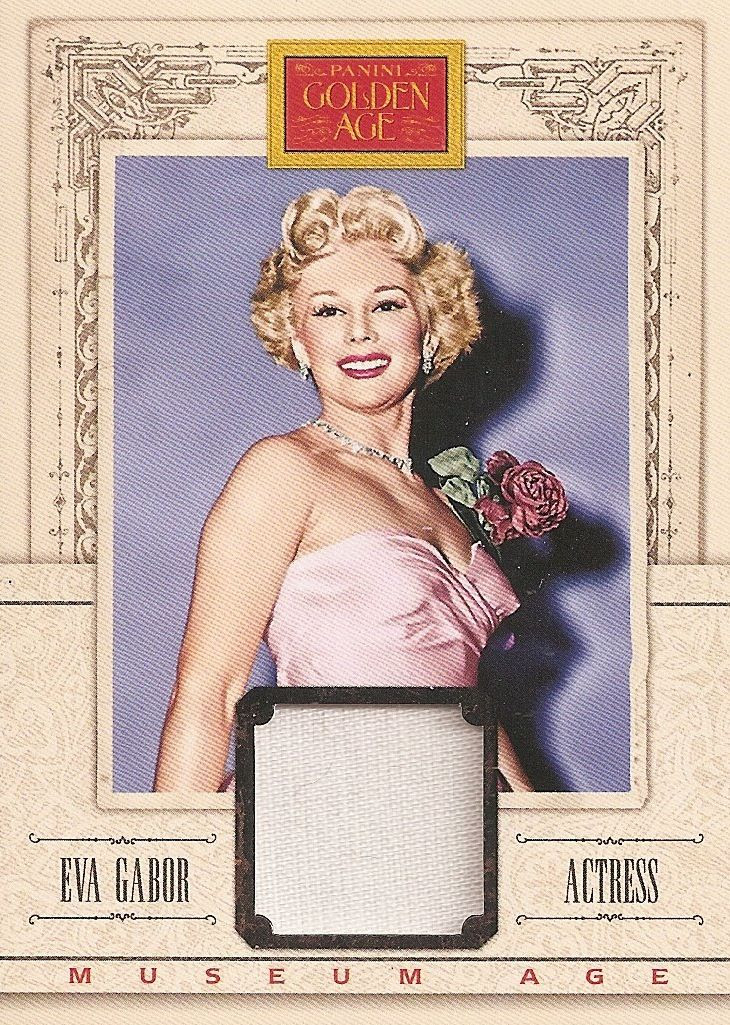 My one memorabilia card from the box was of Eva Gabor. Unfortunately, the card does not specify what the piece of cloth is. It could have been from a dress, a shirt... really anything. It would have been nice to get specific information. But other than that, the memorabilia card looks great. The square themed design frames the image and the memorabilia piece nicely. I especially like the border of the cloth. Overall, the card is pleasing to the eye and appropriate for a set like this. 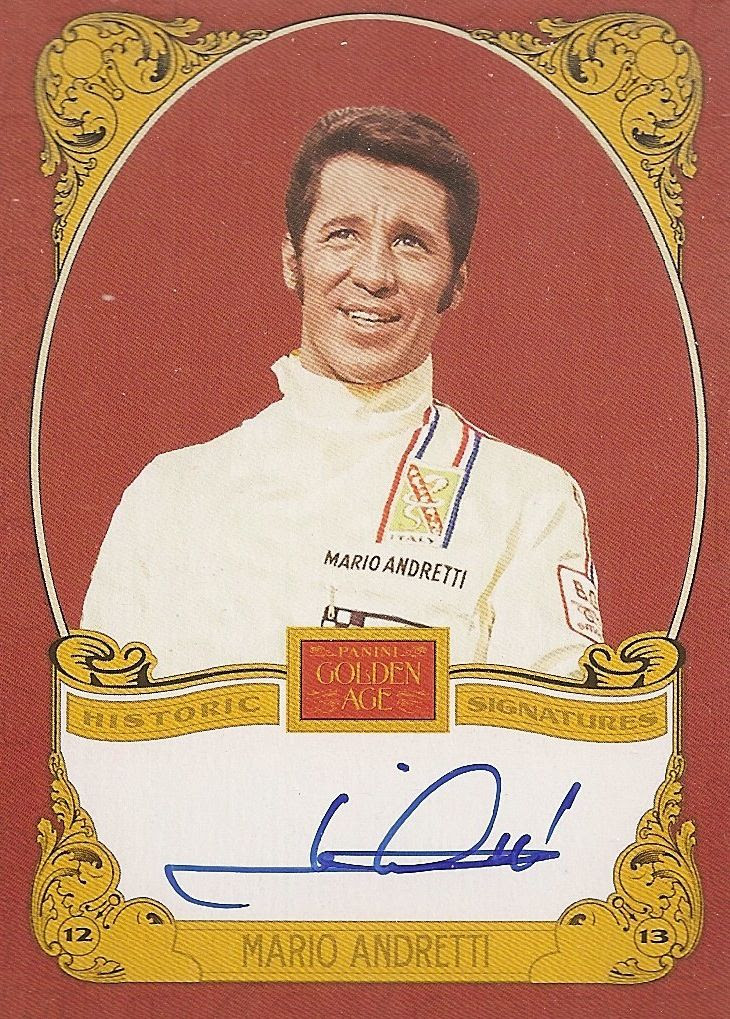 My autographed card came in the very last pack of the box. I was actually afraid this box was shorted. Thankfully, the best came in last - which is ironic because the autograph I pulled was of IndyCar racer Mario Andretti. Though the card has a pretty plain design, it's done in a tasteful way. The autograph is on-card and looks great in the area Panini provides. I can't say that I'm jumping out of my chair with the way the card looks, but it is definitely serviceable.

Overall Rating -
Panini Golden Age is a product that definitely feels like it goes deep back in time. Looking at the subjects of the set though, that's not really the case. Golden Age is a quirky set that packs a lot of interesting things inside it. Is it better and more interesting than other sets of its ilk? I can't really say that it does. I would honestly chose other products over this one when it comes to a product with a lot of historical variety. That being said, Golden Age is not a bad product. I would suggest looking long and hard at the checklist. There are things to be found here that aren't found in other products. If you see a vein of interest that you like, then Golden Age might be the retro product for you.

In terms of price, Golden Age is definitely one of the more affordable breaks. I've seen it selling for under $70 per box. For that amount of money you will get a good amount of mini cards, an oversized card, and two hits. Oh... and of course... a lot of fun looking at the cards!

For collectors who enjoy breaking historical products, I'd suggest giving one box a try at first. See if this is the product for you. If you're all about sports and sports cards, you may want to give this one a pass.