Even with a shortened season and a limited hockey card release schedule, Upper Deck puts out their beloved SP Authentic brand to the delight of collectors around the globe. This year's SPA is like other products that have come out recently - it doesn't just contain SPA, but also includes nixed products from this season such as SPx, Upper Deck Update (basically Series 2), and MVP. SP Authentic is a product that many collectors look forward to each and every year (including myself), so I'll be eager to see what Upper Deck gives us in this iteration of this long-standing brand. 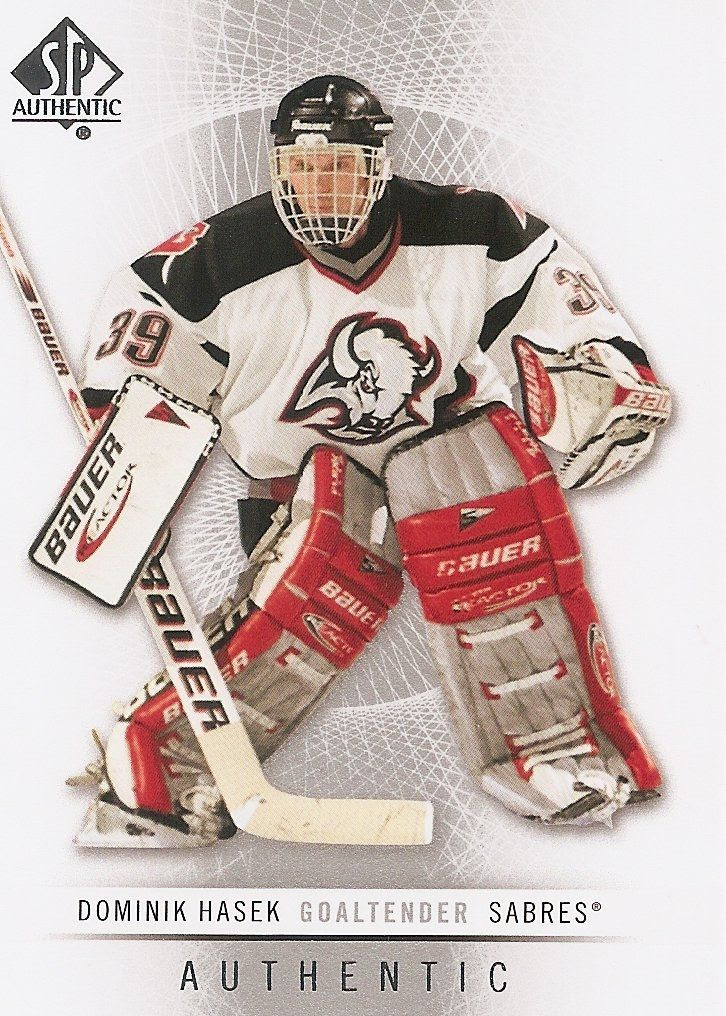 Base Card Design -
SP Authentic has long given collectors a clean, primarily white themed base card - and it does so again. Collectors have come to know what to expect from SPA base, and this gives us exactly what we thought we would get. To some, it may be too repetitive and boring, but to others, it's comforting to know that SP Authentic carries on a legacy of its own style. SPA is comfortable in its own skin - no doubt. The brand, and the base card design, exudes a confidence that others can rarely match. This year's look is again very modern with foil highlights. My only complaint about this card is the silver streak that bisects the middle of the card. I'm sure it's there to center the attention on the featured player, but to my eyes it just looks a bit off. The silver streak contrasts a sweet hidden circular design in the background, which is cool, but the execution wasn't to my liking. I probably would have done away with the streak and made the pattern silver instead - just my opinion... but all-in-all, the design team at Upper Deck has given collectors a solid effort once again. 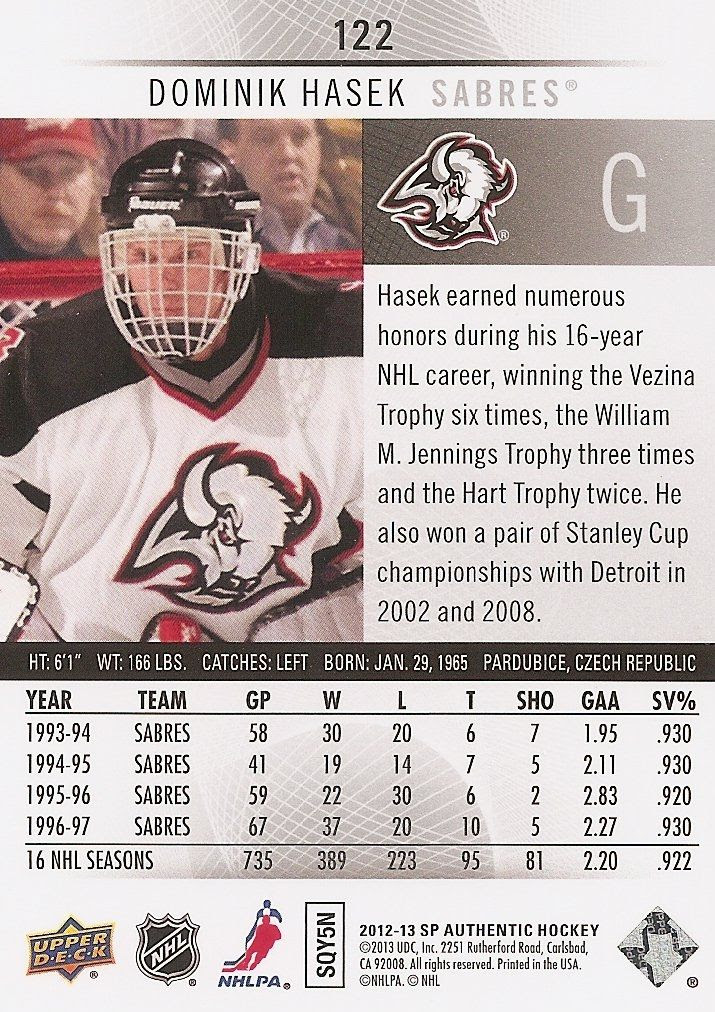 Wow. Check out the back of the base card! After looking at other company's base card backs, I had forgotten how well they could actually be done! These backs have a full color picture (the same as the front, but including the background), a full write-up to read, and up to four years of statistics. They are outstanding in comparison to the other non-Upper Deck brands. Well done with these! 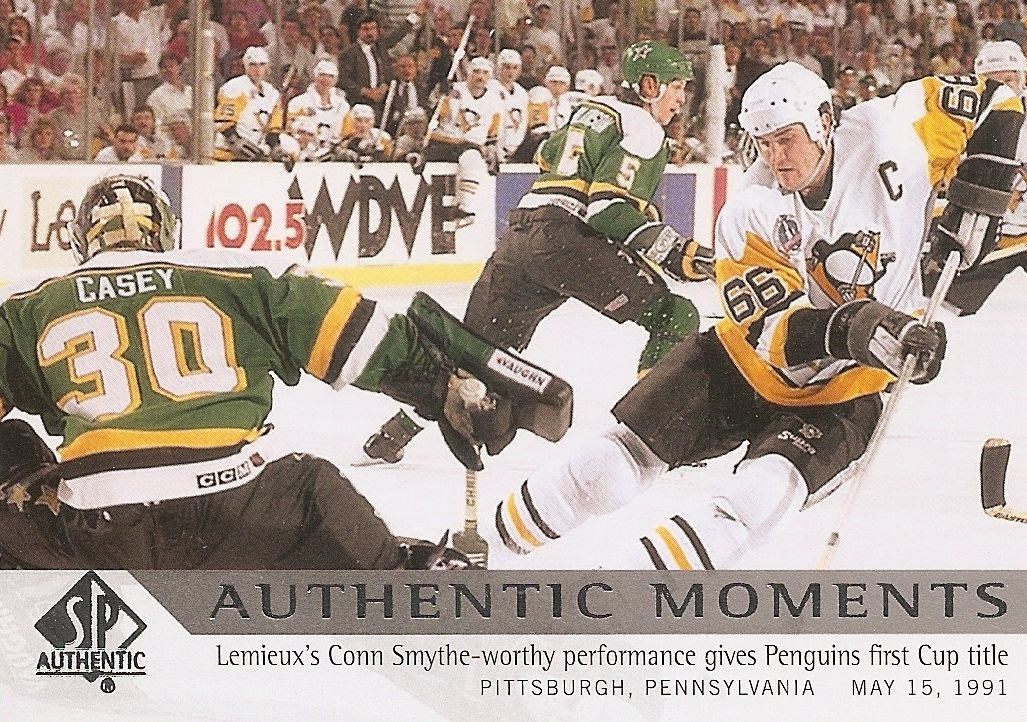 In year's past, SPA included a subset called 'Essentials' that was serial numbered. It provided an extra challenge for collectors as they went for the main set of SP Authentic. Those are gone and have been replaced by subsets called Authentic Moments and Team Canada Moments. These cards are not serial numbered, but come with a variety of different tiering. Some of the Authentic Moment Auto Parallel cards are especially difficult pulls. In all of these cases, these 'Moments' cards give SPA a very different feel. Gone is the stark background! Notice the full-on photography used here; they are of the quality of Upper Deck Series 1/2. In other words: awesome. These cards are a refreshing new addition to the SP Authentic brand. 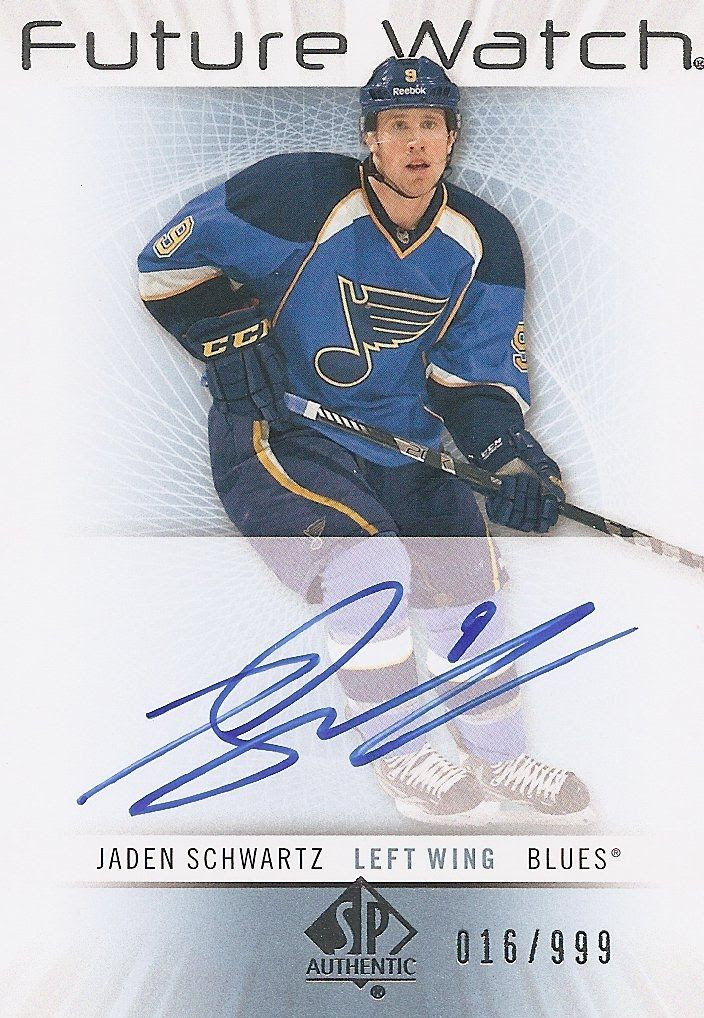 Not gone, though slightly diminished, are the Future Watch rookie cards. Future Watch rookie cards have a huge following. These cards feature an on-card autograph, and are serial numbered to 999. Typical Future Watch sets can be upwards of sixty cards. This year there are only twenty-five FWAs to collect - that's less than half of the usual amount! Obviously, this is because of the rookie card restriction imposed this season by the NHL. That's too bad, because the Future Watch design this year is pretty sweet. Like the Moments inserts, these cards bring in a breath of fresh air to the product. I really like the light blue backing (it's similar to the base card, but the lightness of the blue just works better) and the Future Watch logo itself . There is ample space for the autograph and everything gels nicely together. I will definitely be going for a set of these as I'm sure many collectors will too!

Inserts/Game-Used/Autos -
SP Authentic is known for it's autographed content. Each box will contain at least three autographed cards within. Although I didn't get one in my box break, about one in every three boxes of SPA will contain an SPx bonus pack. These packs will have SPx base cards as well as sticker-ed rookie jersey or patch content! 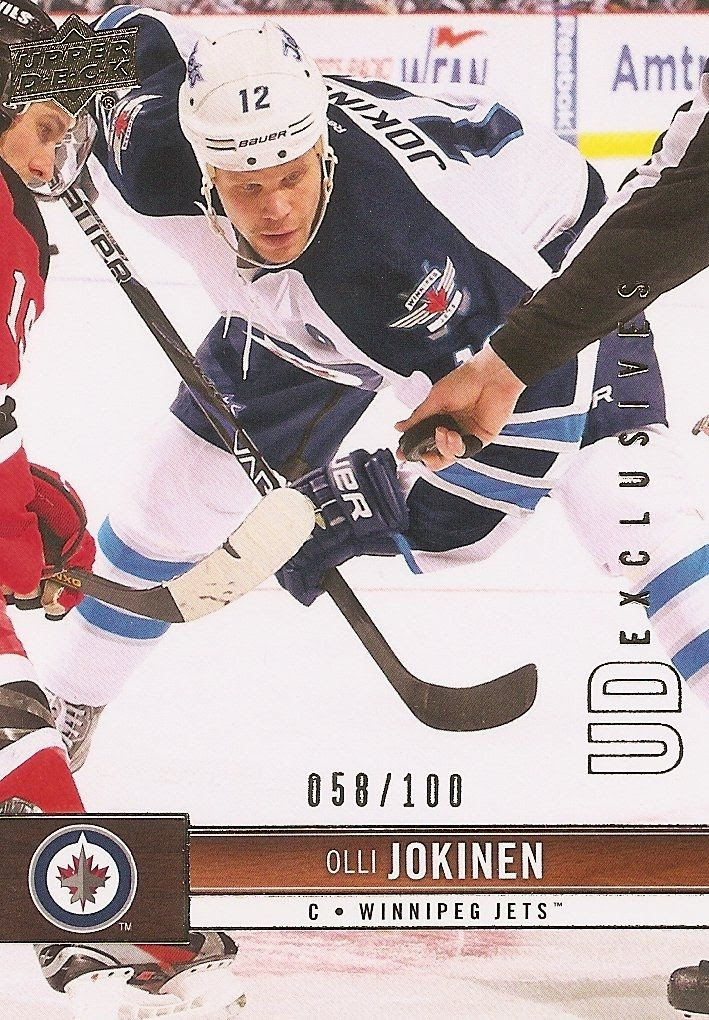 Going into the box break, I knew that Upper Deck Update cards would be included. This was a great idea since Upper Deck Series 2 was cancelled. It gives collectors a chance to finish off their Upper Deck series 1 set with players who were not included or were traded. The Exclusives parallels have made it into packs as well as evidenced by the Olli Jokinen above. 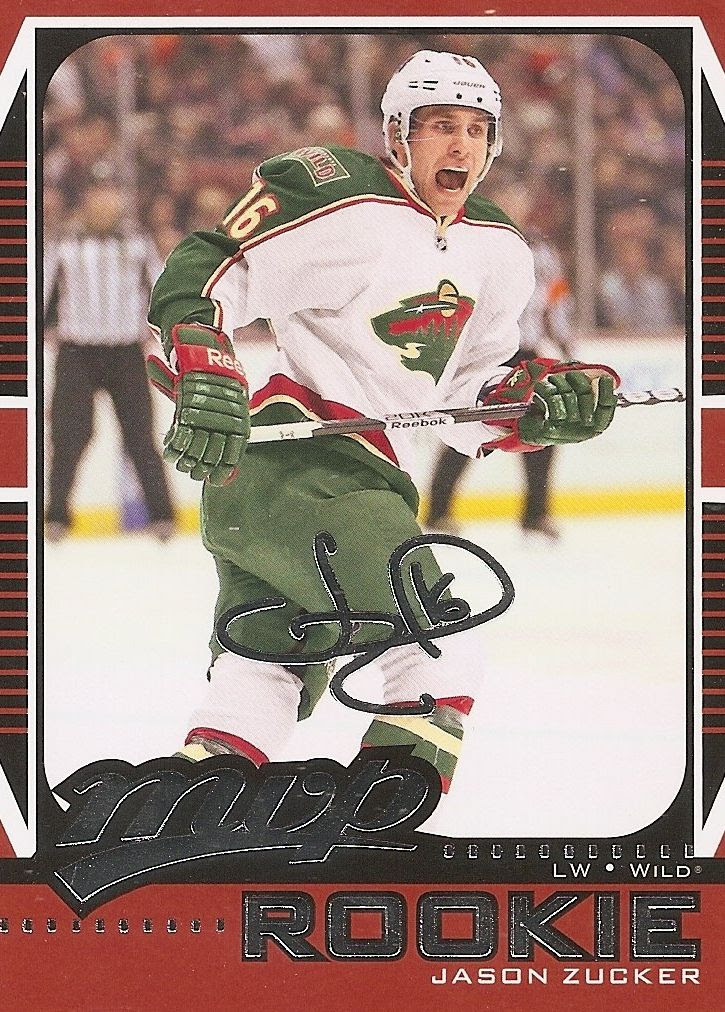 MVP base cards were inserted into Upper Deck Series 1, so naturally (I guess!) MVP cards had to make their way into SPA as well. My box came with two MVP rookies cards - Scott Glennie and Jason Zucker (above). I LOVED the MVP rookie design last year. It was black, classy, and understated. This year's is a bit of a mess to me. There are just so many lines on it... and the color scheme has a bit to be desired. But you know, the more I look at them, the more they grow on me. I'm not sure why! My initial reaction to them was: 'they are hideous!' But for some reason I've mellowed on them. I guess that's a plus! 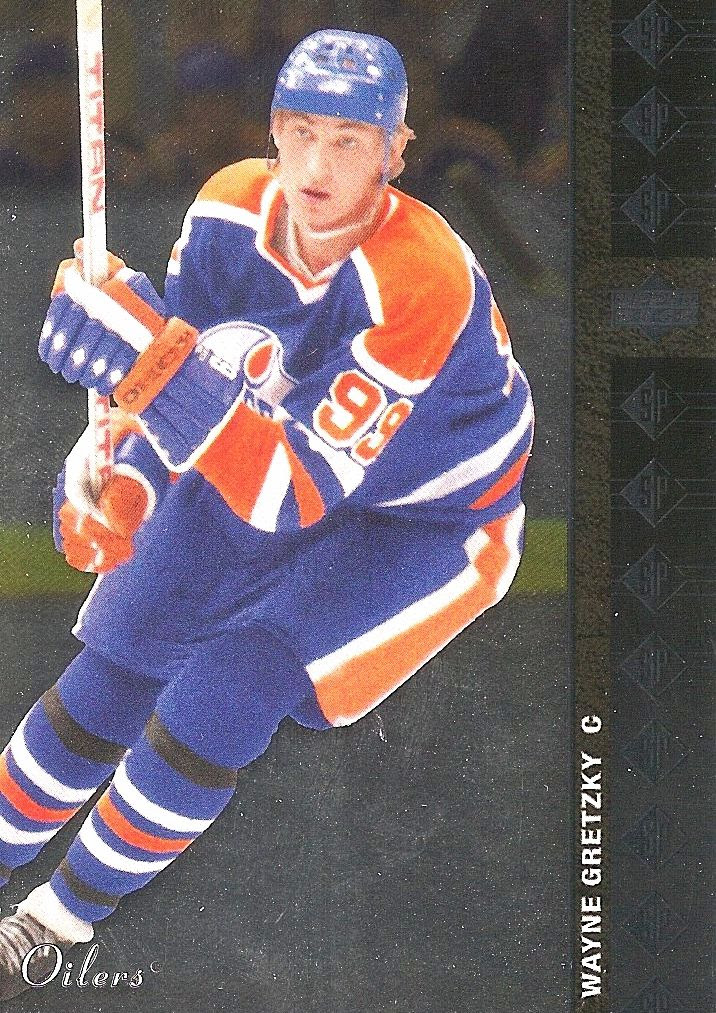 An insert card that I did not expect to find was the 94/95 SP Retro card set. These classic cards make an appearance in this year's SPA set. I loved these cards back in the day, and I'm glad to see them here in this product. Standard 94/95 SP Retro cards are just like the Gretzky above - all foil and shiny. Die-cut on-card autographed versions are available to be found as well. For collectors who remember these, they will bring back fond memories I'm sure! 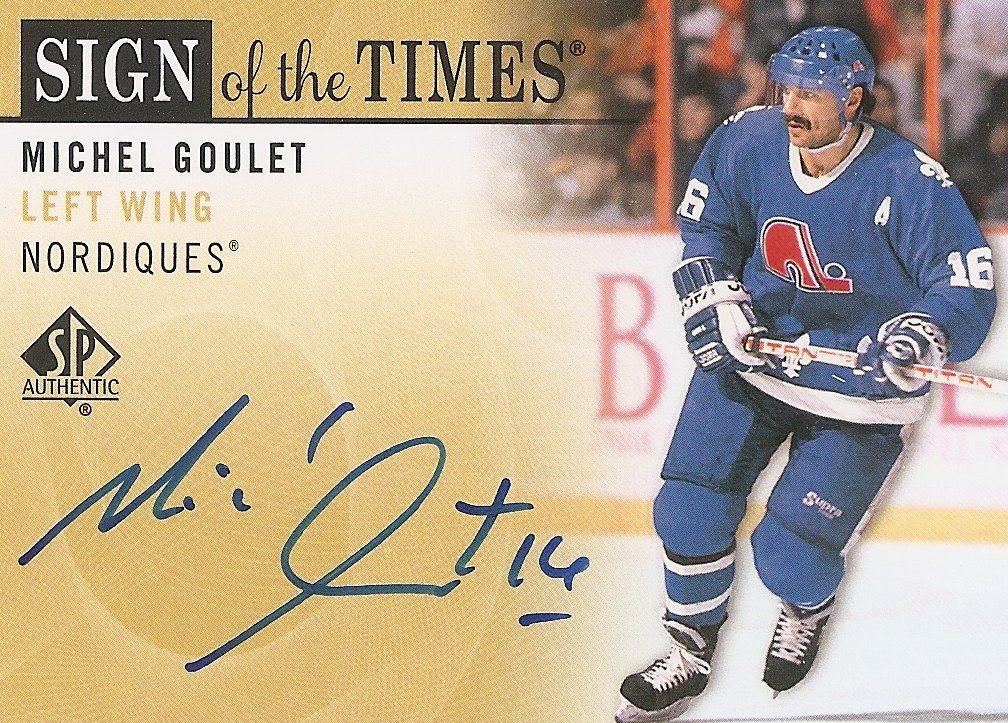 Sign of the Times have returned to this year's SP Authentic. This year's SOTT card has a golden background that makes it look more classed up than usual. There are three tiers of the single autographed SOTT cards. The Goulet I pulled in my box was a group B auto listed as being 1:428 packs! That really surprised me! As with the past, the Sign of the Times cards also come in mult-autographed variations. There are even some left over SOTT from previous years that have been inserted into the product.

There are many more inserts, autographs, and memorabilia cards to be found in SP Authentic this year. I'm sure collectors will have a blast ripping boxes in search of all the rarest ones.

Overall Rating -
SPA is SPA. I'm sure collectors who have collected for a while know exactly what to expect out of this product. It's one of the most popular and anticipated cards sets of the year. 12/13 SP Authentic gives collectors what they want - hard signed content, Future Watch Rookies, and more.

Though there is a ton of great content to be found, pulling greatness out of SP Authentic can prove to be very difficult. It is a very hit or miss product - and this year, with a weaker rookie class, it may be more of a 'miss'. Hopefully, one of these rookies will break out and make this year's SPA a must-buy... but only time will tell!

If you're going to buy SPA, I definitely suggest purchasing it by the box (or case). That way, you definitely get something out of it - three things, actually (and a chance at a bonus pack to boot). With 24 packs per box, I have found it to be very difficult pulling hits out. Packs are about $5-6 each. And that can add up to a lot when you keep buying and buying hoping for a hit to come out.

I can say that recommend SP Authentic this year. Though the rookie cards may be lacking, Upper Deck has added in enough extra goodies to warrant its purchase. Let me know what you get in your boxes of SPA, I'd love to hear about it!