It seems like it's been forever since the last Panini hockey release! Today Panini finally gives hockey collectors something to sink their teeth into - 12/13 Rookie Anthology. This is the second year of this brand. Last year, collectors were treated to a product that filled in a few gaps in terms of rookies, players, and product lines. Anthology does the same again this year, but on a much wider scale. This product packs it in by including products that were cancelled because of the lockout. Let's open up a box and see what comes out of it! 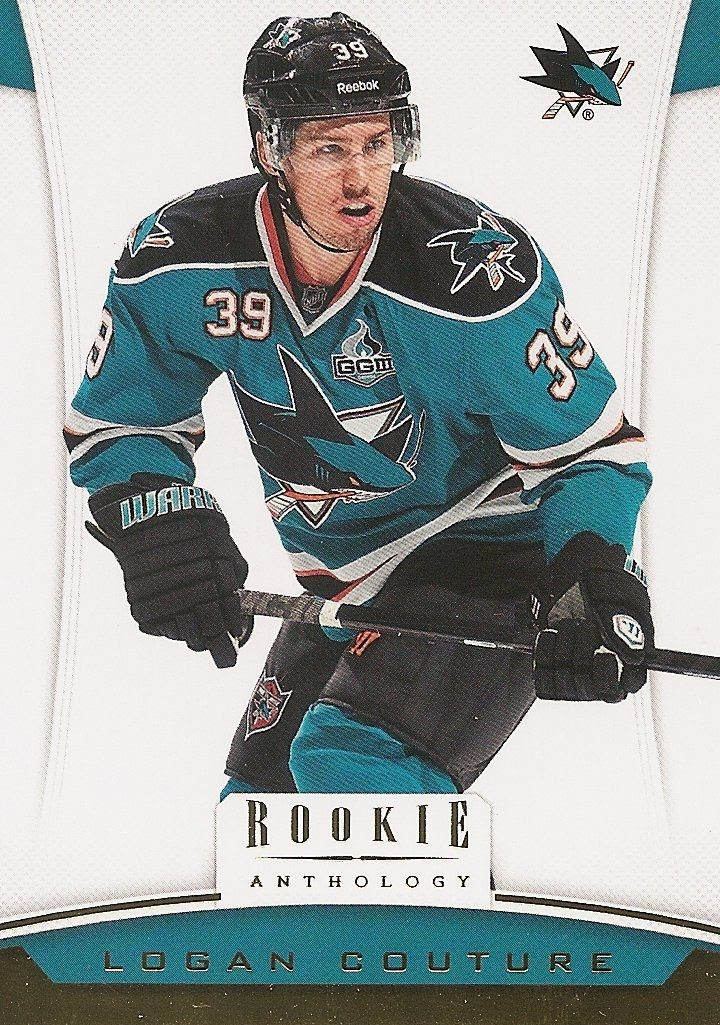 Base Card Design -
The base cards in 12/13 Rookie Anthology are spot on for a product of this price range. The base are cleanly done and uncluttered. The curves that frame the photo do a great job of centering the player, and the white background helps the player to really jump off the card. Because this is an upper-mid-range product, I'm glad to see some gold foil applied to the front. It's not a lavish amount of foil, but it's enough to satisfy the notion that these cards have a premium feel to them. Team colors are used as accents on the card; again, they are tastefully done. All together they make up a pleasing looking base card. If I had one complaint about them it would be that they are on the thinner side. Slightly thicker card stock would have been nice, but it's definitely not a deal breaker here. 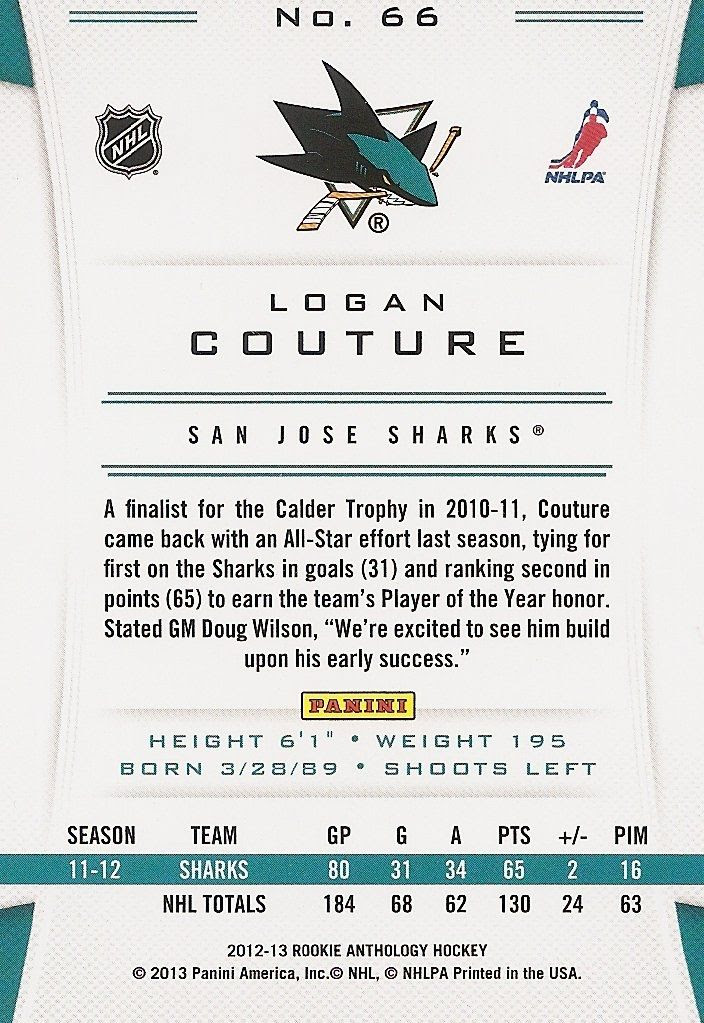 The back of the base card is standard Panini fare. The backs mimic the front of the card in design, which is a plus, but nothing stands out about it. It's pretty pedestrian. I've noticed recently that Panini backs have been moving toward this simpler design scheme. I'm not sure I like that. Perhaps more attention is being paid to the front, with only an afterthought to the back. I would like to see more pop from Panini in future releases as it pertains to the card back. 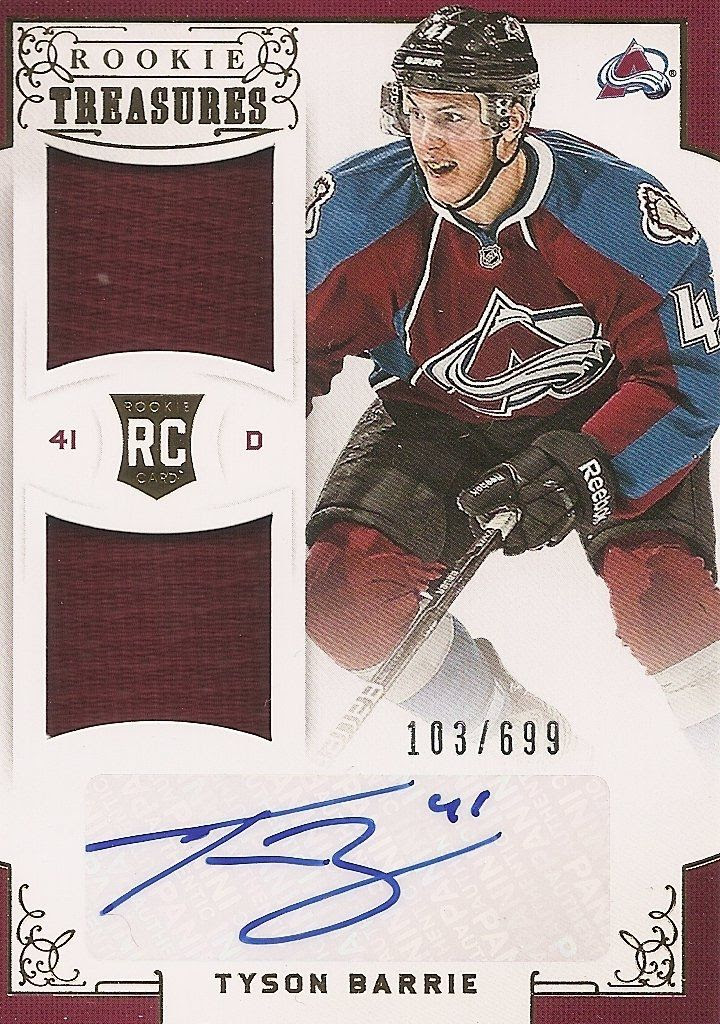 Like last year's set, Rookie Treasures auto/memorabilia cards highlight first year players. These super thick (for a) jersey cards look amazing. They have the feel of a card coming from a higher-end release; the design is done so elegantly. The gold foil that borders the card is classy, and reminds me of something that could come from National Treasures or Dominion. Though the cards have sticker autographs, the sticker placement looks natural and appropriate. Each card is serial numbered. The Tyson Barrie above is numbered 103/699. Lower numbered patch versions of these cards can also be found.

Inserts/Game-Used/Autos -
Rookie Anthology is not really about itself. What I mean by that is that this release is really meant to give collectors pieces of other products that were not available this year. Panini has jammed in cards from Titanium, Elite, Crown Royale, Luxury Suite, Contenders, and the never-been-made-for-hockey-yet Prizm. 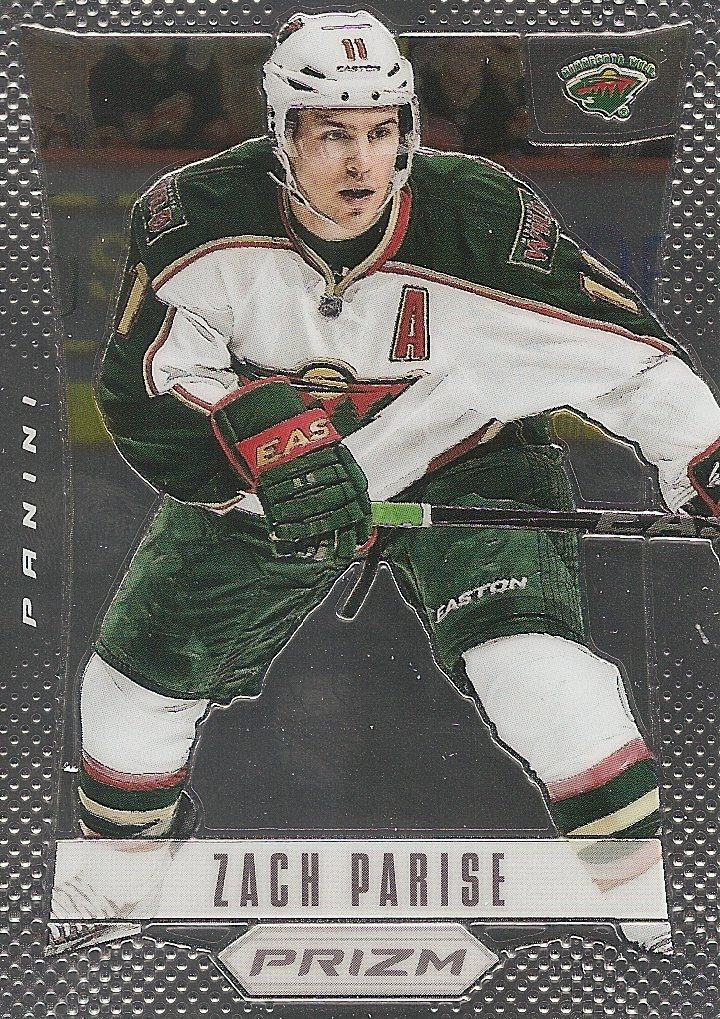 Each box of Rookie Anthology comes with a bonus pack of Panini Prizm. Prizm has been a very popular new brand for Panini this past year in other sports. The foil and light refracting technologies found in it have caught collectors by storm. The base Prizm cards share the look as all the other Prizm brands across the other sports. For collectors who like the all-foil look, these will be a real treat to get. 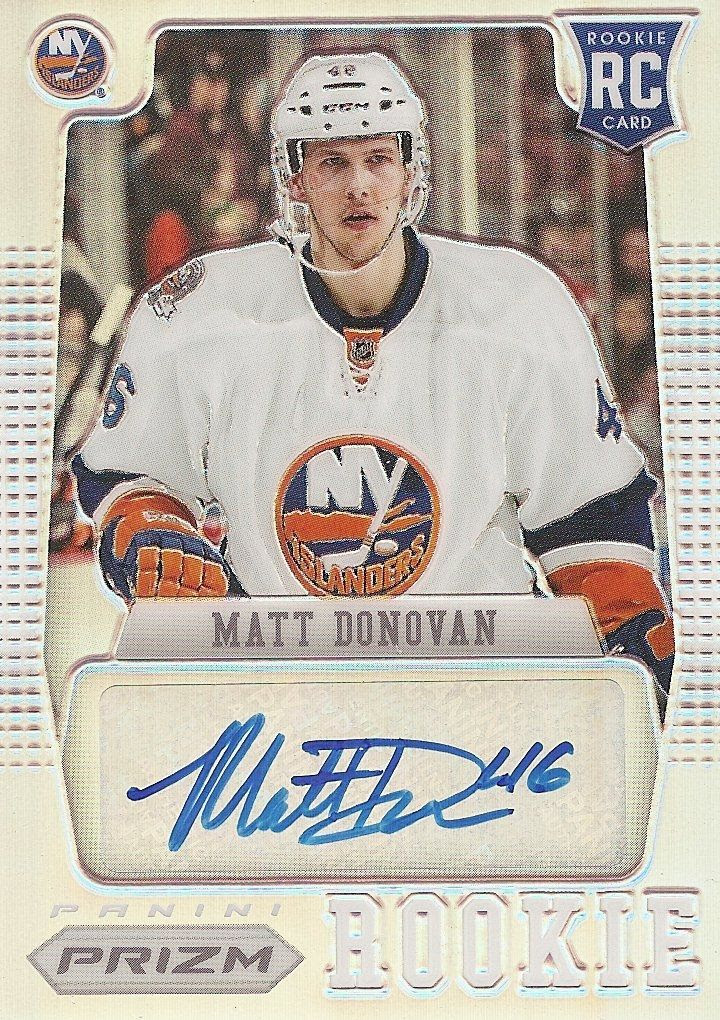 Packs of Prizm contain three cards. Two of the cards will be a standard base and/or rookie while the middle card will be something special. Collectors can find autographs like the Matt Donovan I pulled, or a multitude of limited shiny parallel cards. It will be interesting to see how well hockey collectors receive Prizm. I wonder if it'll be as hot as it has been with the other sports. 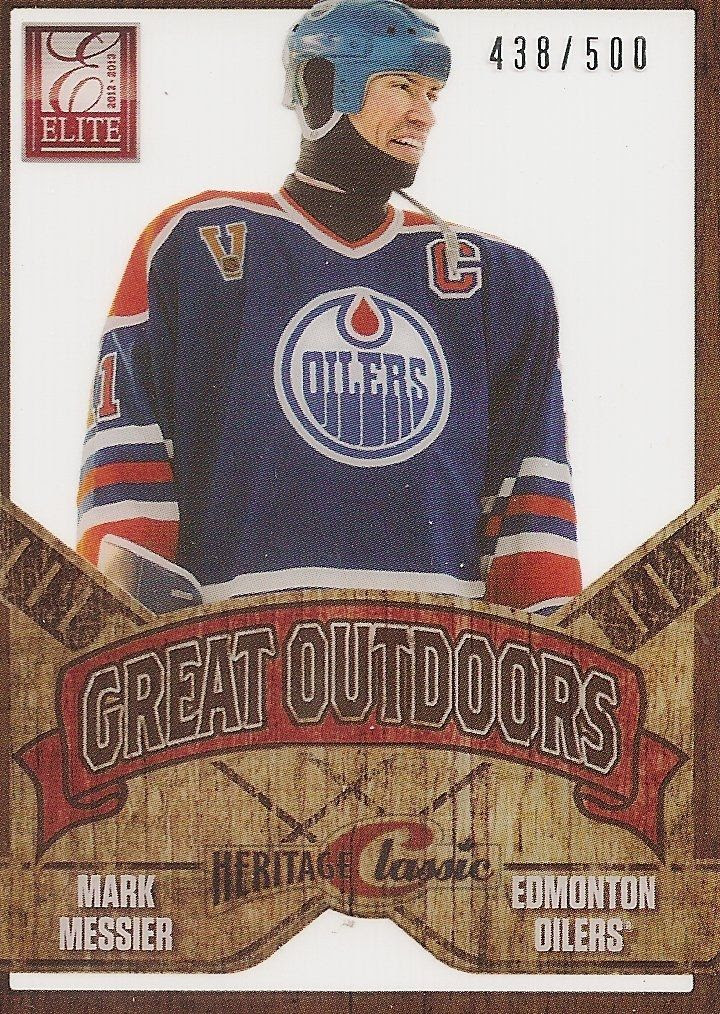 From the Elite side of the product comes this Great Outdoors acetate card of Mark Messier. I'm glad to see Panini continuing with it's use of acetate in hockey. It's such a great fit for the sport. These Great Outdoors inserts represent hockey played outdoors. The image used of Mark Messier totally wrapped up is unique for sure. The pairing of the wood grain look and clear acetate is a genius move, and the serial numbering is a great touch as well. This actually might be my favorite looking card in terms of card look and design that I pulled out of this box. Elite is also represented in Rookie Anthology in its more familiar all-foil look. Rookie cards and die-cut rookies feature the fully foiled look along with serial numbering. Check out my video break for a Ryan Hamilton Eilte rookie numbered to 999. 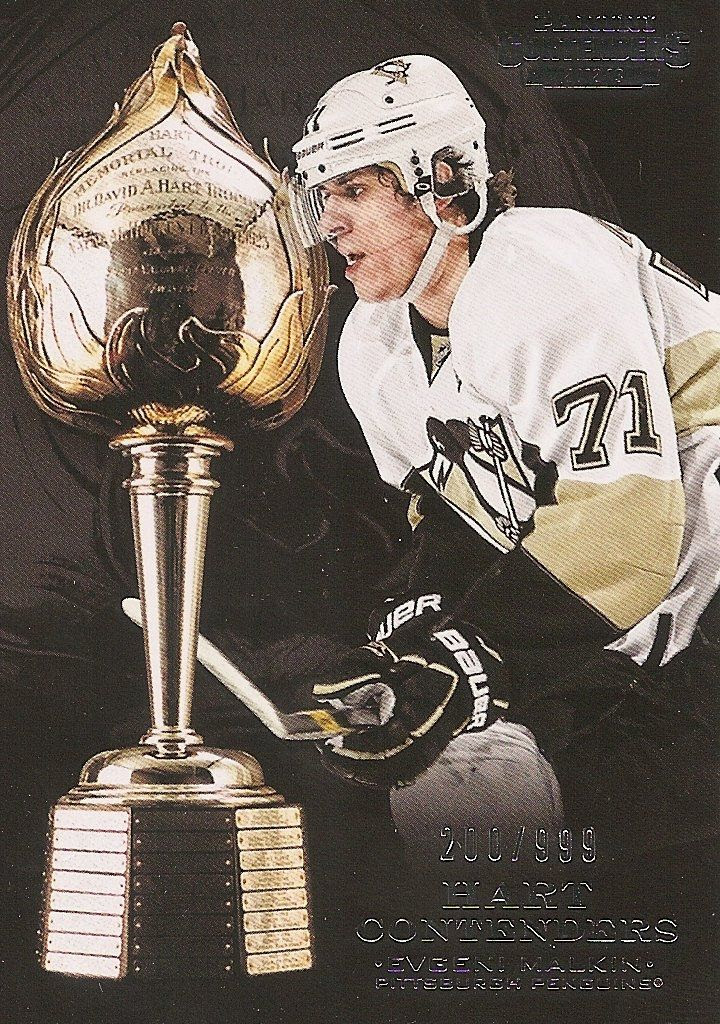 Contenders makes its presence felt in a couple ways. The first is it's Award and Cup Contenders insert sets. These sets are remind me of the similar themed Panini Limited cards released earlier this year and last. It's like the poor man's version of those cards. These cards feature a large image of the trophy and the player. It's cool looking... it's just... well... it was done better in Limited! I'm sort of scratching my head with these guys; I'm wondering why make something so close to something you already came out with? 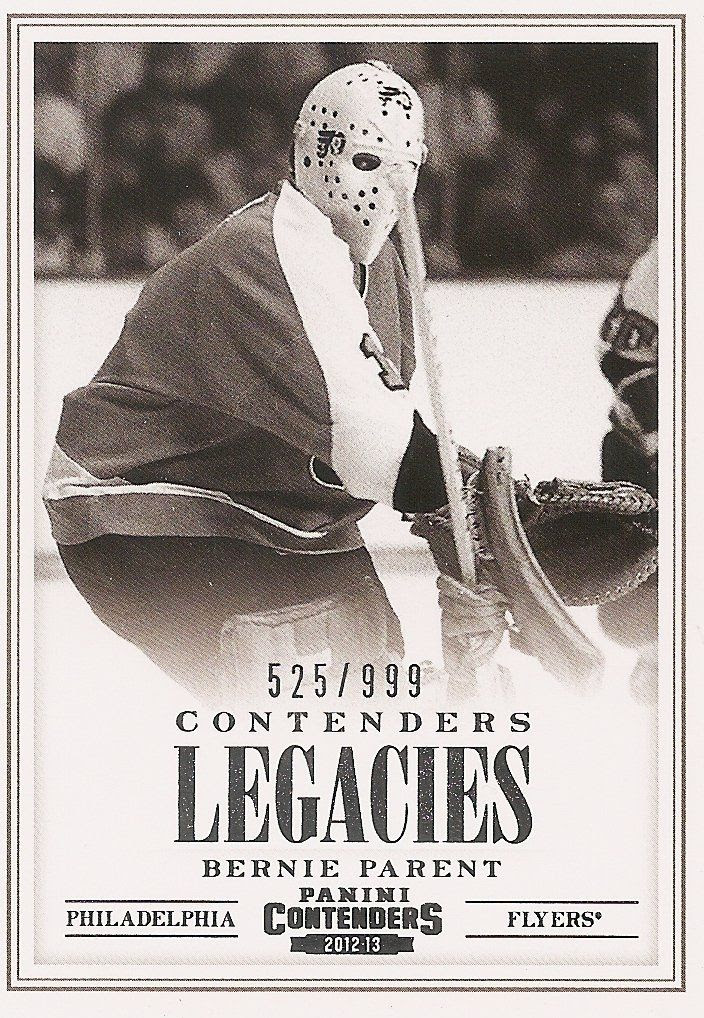 Contenders Legacies are the other cards from the Panini Contenders segment of Rookie Anthology. I much prefer these to the Award Contenders cards - they are much more in-line with what could be found in Contenders boxes when they debuted during the 2010/11 season. These Legacies insert cards have much class to them. The black and white photo goes with the 'legacy' theme perfectly. I'm sure they won't fetch a high dollar amount, but collectors who enjoy finding star players from the past will appreciate these beautiful cards. Each card is serial numbered to 999. The standard jersey cards found in Rookie Anthology are the Game Worn Gear cards originally from Titanium. Panini has updated the look of these memorabilia cards so that the metal plating in the background is more pronounced. It's an improvement from its original design, but seeing as it's called 'Titanium', some metallic foil may have been an appropriate addition. Most Game Worn Gear cards are unnumbered plain jersey swatches, but there are prime and patch variations with limited numbering on them like the Timonen piece shown above. Though I didn't get one, the jersey numbered Titanium rookie cards have been inserted as well. Last year's true Titanium rookie cards commanded some pretty insane prices on the secondary market. They were difficult to find, and the same holds true here. If you get one, you've gotten yourself a very sweet pull. 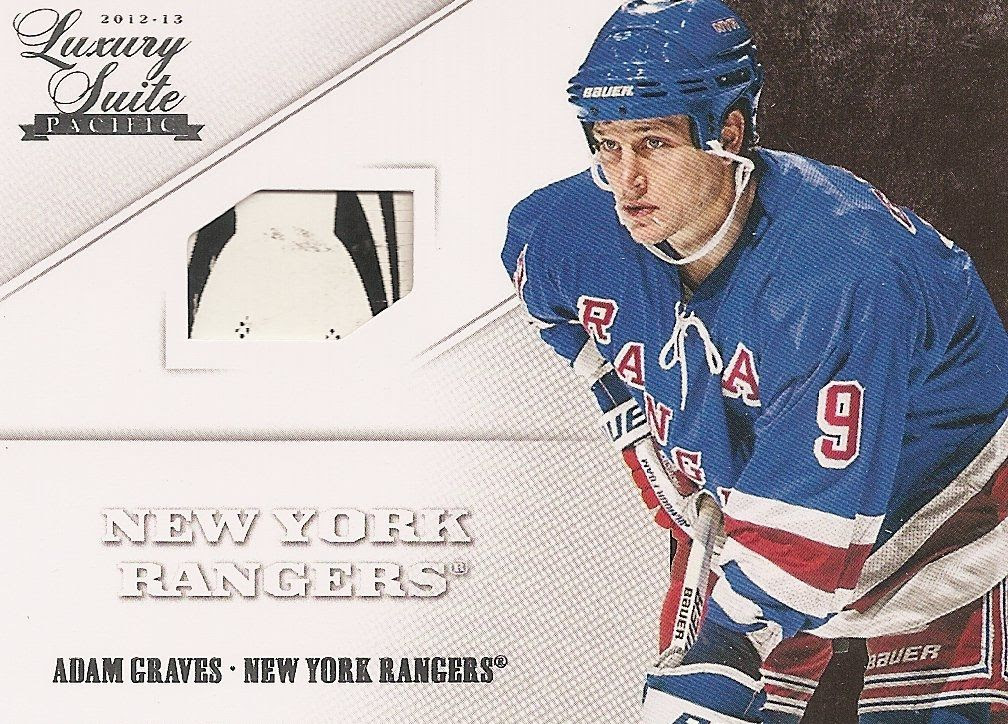 Luxury Suite brings autographs and memorabilia like this Adam Graves stick card to Anthology. Luxury Suite did not do well on the secondary market when it came out in 2010/11, but the cards were very nice looking. It's great to see that Panini has not abandoned the brand entirely. The Luxury Suite cards, like the Rookie Treasures, impart a higher-end feel to the set. 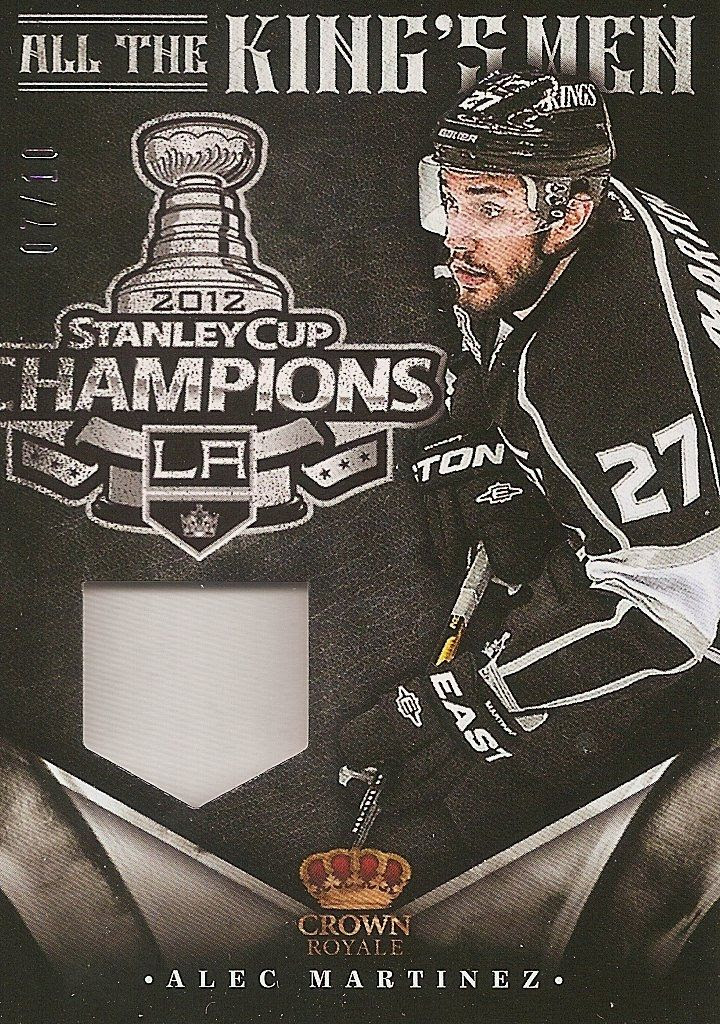 Last but not least, Crown Royale puts its unique card types into the mix. This Alec Martinez patch card is an example of the All the King's Men memorabilia set. I wish the patch was nicer, but I can't complain too much about getting a card numbered to just 10. Also from Crown Royale are the Rookie Silhouette cards. These cards have been darlings of the hobby since their introduction two years ago. I'm sure collectors will again go wild for them this year. They should be among the hottest cards to find in Rookie Anthology. 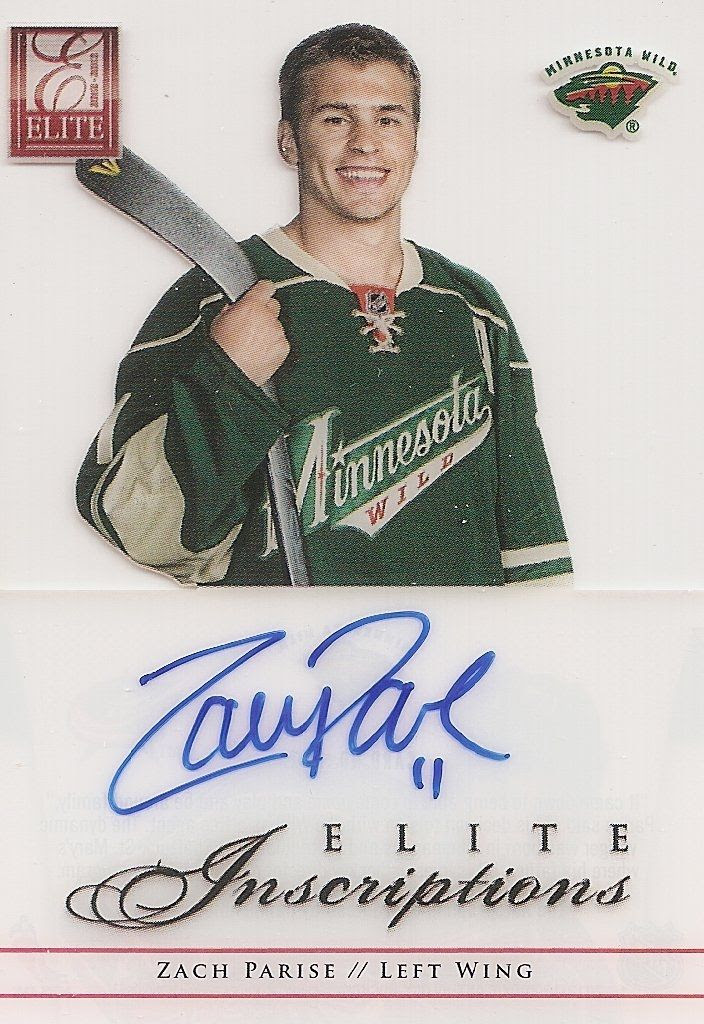 There is just so much to find in Rookie Anthology. You'd really need to bust a case to get a good sampling of all the inserts, game-used, and autographed cards available. Though I was able to pull a large variety of cards in my box, it's only scratching the surface of what is in the product. See what I did there?

Overall Rating -
I haven't seen a new Panini hockey product in a long while, and I didn't know what to expect at all from Rookie Anthology. I was actually preparing to be underwhelmed.

Rookie Anthology was a great break. It was full of fun and full of value. For the price, Rookie Anthology is a winner. I was amazed at the possibilities of cards to find within boxes. The bonus Prizm pack added even more value to the product.

Today during it's initial release I've been able to see quite a bit of breaks over various internet sites. Many collectors have had similar positive experiences with Rookie Anthology. I can't say that there are a ton of absolute monster hits to be found, but with this product, Panini seems to be giving out solid overall value.

I recommend 2012/13 Rookie Anthology to all collectors either by the box or by the pack. It's price is relatively affordable in both forms. Let me know what you pull out of it! I'd love to hear what you got and what your thoughts about this product were in the comments section.

Check out my break of 12/13 Rookie Anthology from D&P Sportscards: