I had been on a string of Panini products, but now it's time for Upper Deck to take the spotlight for a bit. Last week I went with some hobby Be a Player packs. In the coming weeks  you're going to see more Upper Deck related products coming your way! My hope is that a nice Young Gun will come out of the blasters I ordered. Today we'll start with a 2008/09 Series 1 blaster box. 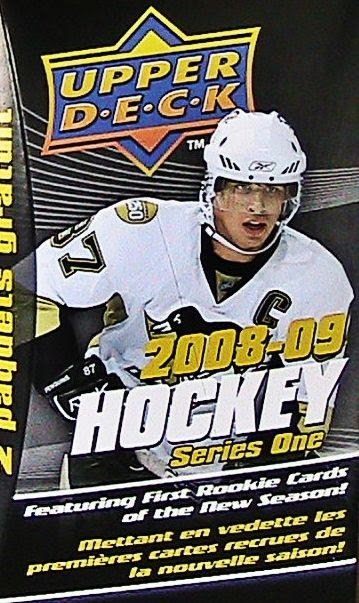 The main draw of these 08/09 blasters is super sniper Steven Stamkos. There are other solid Young Guns to be found in this product, but his is far and away the most sought after and desired. Stamkos basically drives all of the 08/09 products. The 08/09 product line was the the one I just missed as I began getting back into cards in late 2009. I remember really regretting missing the chance to get Stamkos rookie cards - I felt like I missed the boat. Though he is still wildly popular, interest in Stammer has slowed a bit as his team has failed to make the play-offs for two years in a row now. I'd still love to get one though!

Will a Stamkos come out for me? Let's open up this blaster box and see what I get:


Review -
This blaster box didn't contain the coveted Stamkos Young Gun, but I have to say it was still a pretty solid break. I was happy to see the amazing 2008/09 base card design again and I pulled five inserts along with the two Young Guns from the box. Both of the Young Gun cards I pulled are still playing roles in the NHL. They aren't worth huge bucks, but they're much better than someone who is already long gone and out of the league.

I was a little surprised to find three All World Team insert cards in the blaster. The design of 08/08 AWT cards are nice, but the next year's iteration is better in my opinion. With three AWTs, I thought at least one of them would have been a short-printed variation. Checking the numbers on the back, it was not the case. Seeing these cards made me wish that Upper Deck didn't discontinue this series of insert cards. I love the inserts based on nationality and national pride. AWT cards were a great way to do that.

Let's check out the top cards of this break: 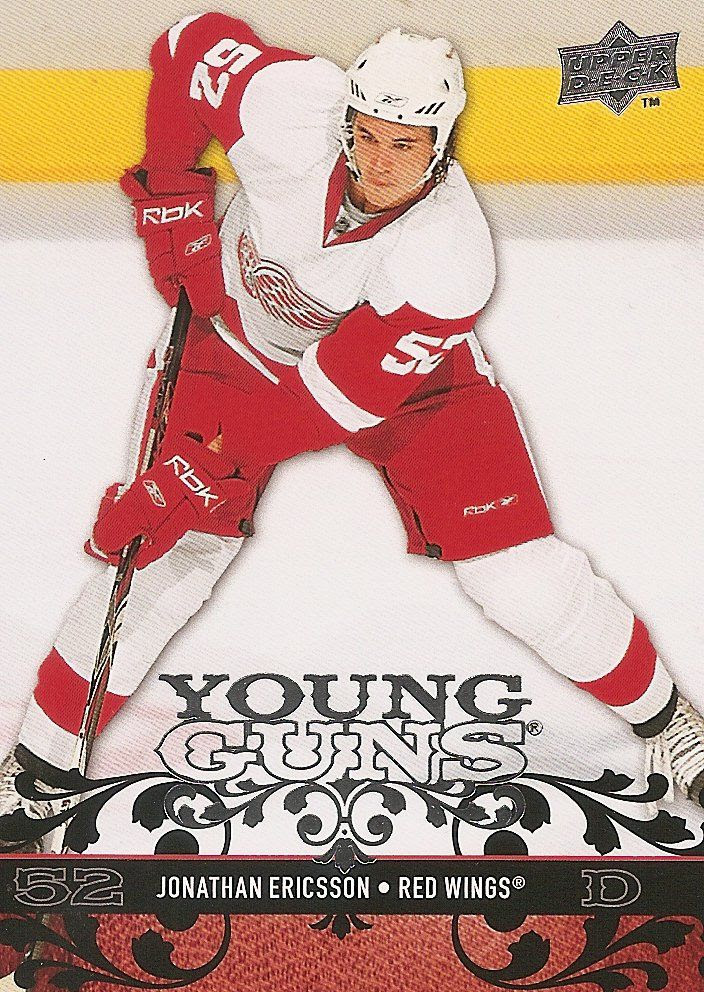 #3 - Jonathan Ericsson Card No. 212
I always feel that I have to put a Young Gun pull in the top three. And between Michael Frolik and Jonathan Ericsson, I went with Ericsson. I guess I chose him over Frolik because of his affiliation with the Red Wings. Though the Winged Wheel is a nemesis of my favorite team, the Sharks, I really respect that organization and they way they do things. They play right, and their players are classy. 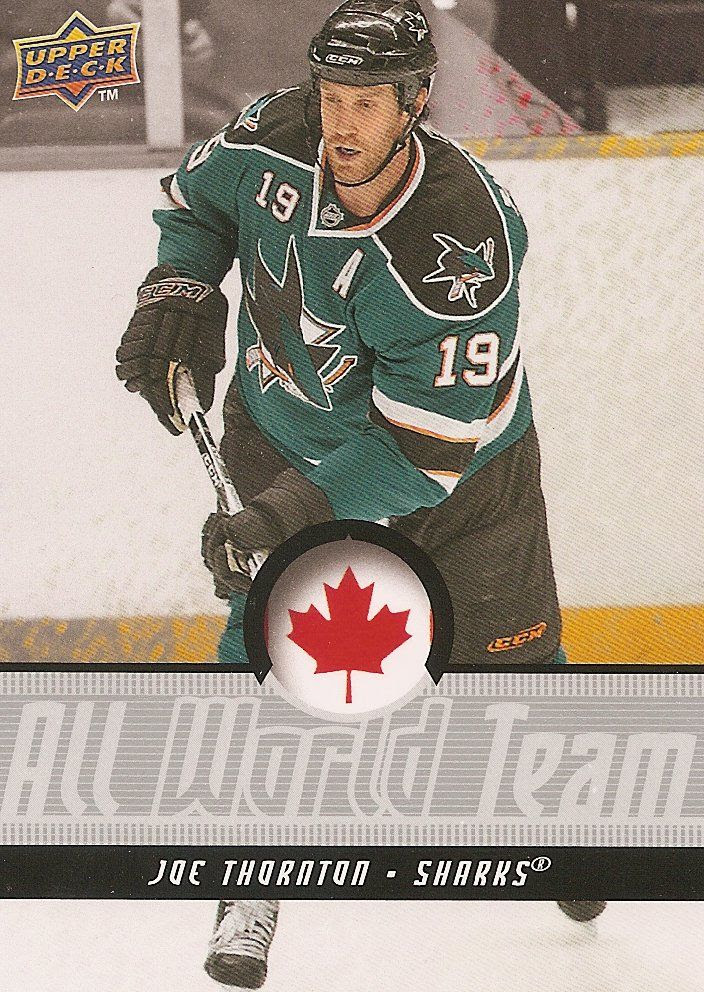 #2 - Joe Thornton Card No. AWT11
Speaking of Sharks, I had to choose Jumbo Joe to go in the two hole. My other two All World Team cards featured players who are more decorated (Lidstrom and Brodeur), but being a home team homer... I had to go with Joe! One thing I do really like about this card is the Canadian maple leaf symbol right in the middle. It clashes a bit with the teal Thornton is wearing and gives the card a unique look. 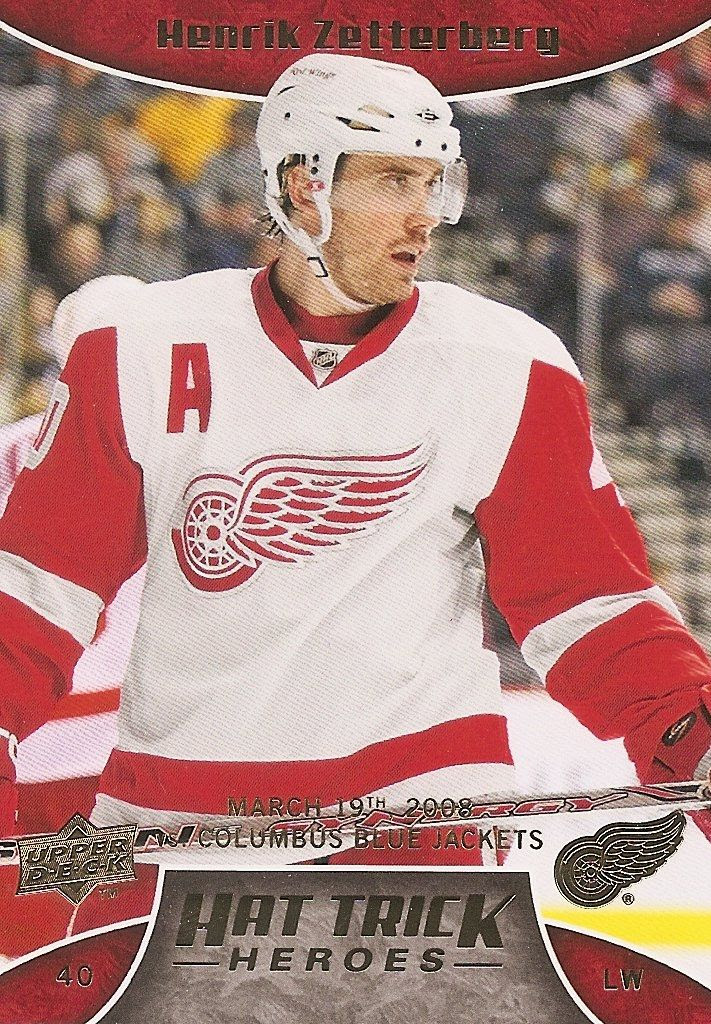 #1 - Henrik Zetterberg Card No. HT9
This Zetterberg card comes in number one for a couple reasons. First, it's just a nice looking card. The foil on the card helps it stand out. The picture is nice and big and clear. I love the fact that it has a date stamp on it showing when Zetterberg got a hat trick. All these things add up to a sweetly put together card. Secondly, this was sort of a bonus insert for me as it came in an unexpected place in the pack. Usually insert cards are right in the middle of the base cards. This card came in at the end of a pack that already had a Young Gun in it, so I felt like this card was a special extra in my blaster.

Overall Value -
At $12.95, this blaster box was a good deal. I try and stay at the ten dollar mark when buying retail products nowadays, but thirteen bucks for a chance at a Stamkos Young Gun is ok in my book. The current sale price is still much less than the original twenty dollars it was when it first came out.

These blasters contain a lot of packs to open and give out a lot of cards and inserts. It's a great break for just about any collector. I would definitely recommend getting some if you're looking for a fun little break for not a lot of money.

Let me know what you thought of my 08/09 Upper Deck Series 1 blaster in the comment section below. Have you ever pulled anything great out of one of these? I'd love to hear about it.

Look for a new episode of Retail Review every Sunday!
Posted by luke. at 12:50 AM