For the first time in a long time I bring you a box from my local Target! I was actually thinking of getting a blaster from either baseball or basketball to change things up a little... but this little gem of an item was calling out to me on the shelf. As you know, Woodland, Ca is not the hockey mecca of the world. Rarely do I see many hockey related items there compared with the other sports. These re-packs are usually a bad idea, but what the heck... let's do it! 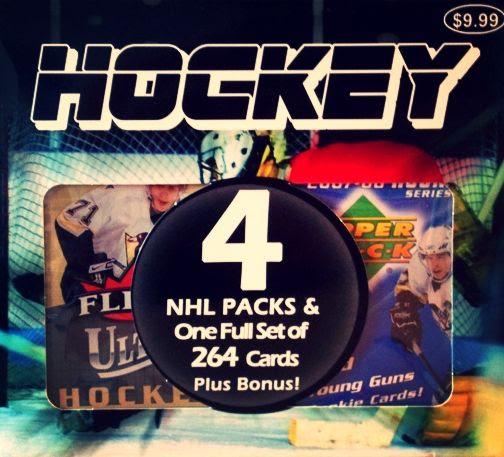 The first thing that jumped out at me when I picked up the re-pack box was how hefty it felt. I have bought re-packs from this company before, but none of them were ever this large. Even their re-packs with 10-12 packs inside were never this big. I figured that the 264 card set and bonus had to be the added weight.

I was very curious as to what this mysterious 264 card set would be. Did they mean there was an actual full set of cards within, or was a set just a big assortment of cards they compiled and threw in? If given a choice, I would hope for the big assortment as they are more interesting to look through and have fun with. Full sets usually are pretty plain and boring.

The bonus inside also intrigued me. Could there be a graded card or hit (autograph or memorabilia card) within? It certainly was big enough to be able to hold a slabbed card. Being a $9.99 price, it probably wouldn't be, but cheap jersey cards could be inserted into something like this relatively cheaply. I just hoped it wasn't another cheap pack of cards - that would be pretty disappointing.

Let's not delay, let's see what's inside this big box of cards:


Review -
You could probably see me struggling opening up this box. If I could say one positive thing about this product, the makers sure didn't skimp on the sealing glue! Actually, it definitely wasn't a positive, the glue was so sticky that I was afraid the cards would get damaged as I tried to get the packs off the cardboard. Sometimes these repacks use tape, and sometimes they use glue. Either way, there usually is too much. Whoever does this job just need to have a little restraint!

As for the content, the repack was pretty bad. The 264 card set turned out to be an actual set! It was pretty surprising to see it pop out when I opened the box. The set actually made my top three so I'll save my comments about it for later. The bonus was a pack of 06/07 Upper Deck MVP. I'm pretty speechless at that. Wait, I do have two words for it: it sucks!

The four packs that showed through the box didn't contain anything mind blowing. I know these are the left over packs that nobody bought. The boxes they were originally in have already most likely been searched through. The best hope in them would have been a Young Gun card or by some miracle an autograph. Jersey and patch cards would have been searched out long ago as pack searchers have an easy time cherry picking those out.

So what was good about this break? Well, not a lot to be honest!

Here are the top three: 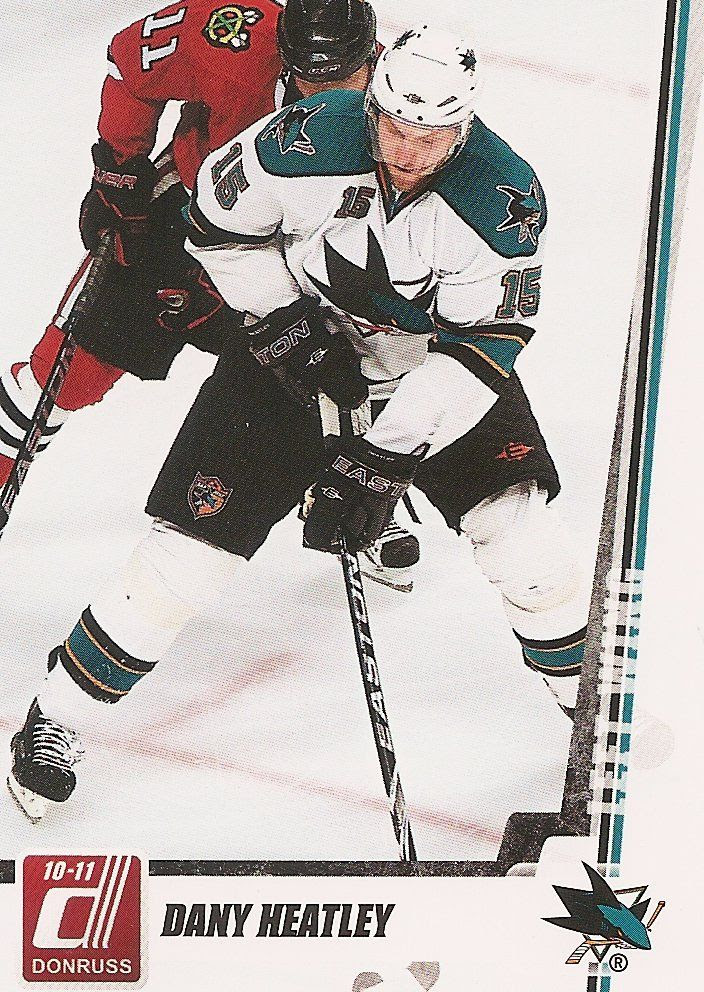 #3 - Dany Heatley Card No. 117
Most people dislike Heatley with a passion - and they have many good reasons for doing so... but for whatever reason I still have a soft spot for the guy. It's probably just because he was a big part of the Sharks when I got back into hockey. I enjoyed watching the line of Couture, Clowe, and Heatley on the ice. Interestingly though, Heatley was injured in a game last week versus the Sharks. He didn't seem particularly pleased to see his old teammates... particularly defensemen Marc Edouard Vlaic. 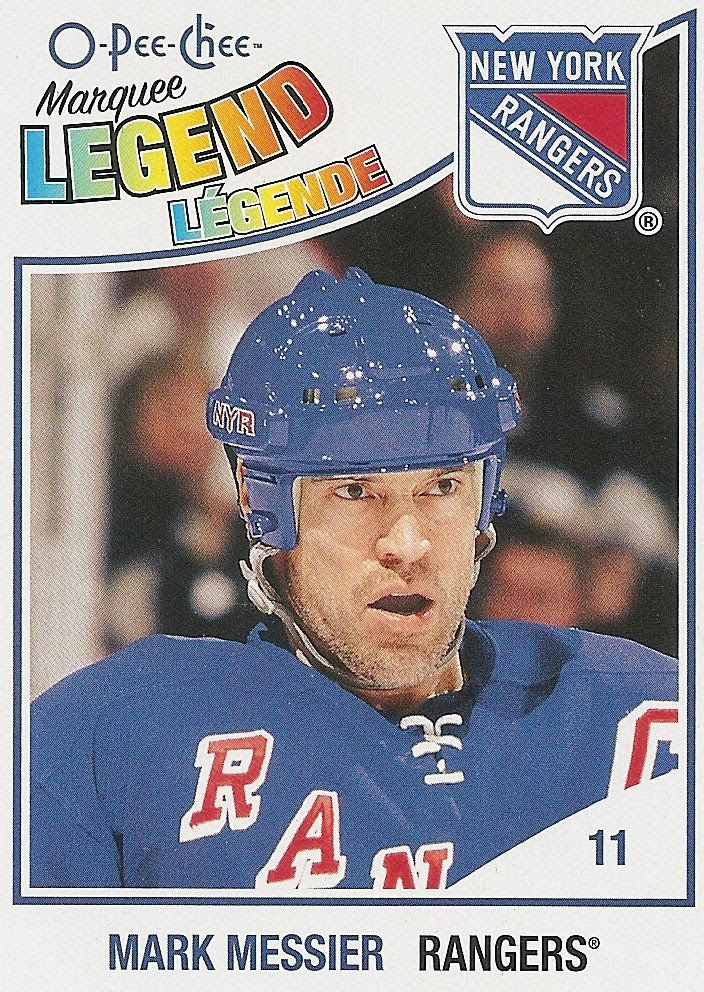 #2 - Mark Messier Card No. 552
It's hard to deny the leadership and ability of Mark Messier. He will always be a legend of hockey. This card comes from 10/11 OPC and is a part of the Marquee Legend subset. Like many OPC cards, it includes a French translation to go with the English. It's only a little apparent on the front with the word 'legend' translated, but the entire player write-up on the reverse side is in both English and in French. 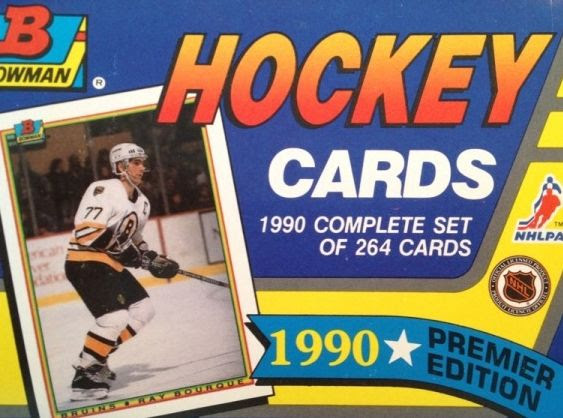 #1 - 1990 Bowman Hockey Set Nos. 1-264
I'm just going to lump this entire set together as it came in it's own factory box - and I don't plan on breaking it up. It was pretty crazy seeing this set in the re-pack. I had no idea that it would be there. It contains a wealth of hockey legends and former superstars, but being so old and overproduced, it's not very relavent to the hobby anymore. I'll keep it as a quirky item... but that's about it.

Overall Value -
For $9.99 I guess there is some value here. I mean, you do get an ENTIRE SET of cards... but I'm not sure how many people would actually want a 1990 Bowman set. The five packs in the re-pack were pretty terrible. I couldn't really recommend this to anyone. This re-pack doesn't even have much in terms of re-buying power either - because if you got another one, you'd end up with another Bowman set! What would anybody do with two of those? I would stay away from this stuff! Far away!

Let me know what you thought of my $9.99 Target Re-Pack down in the comments below. What have you gotten out of these? I'd love to know!

Look for a new episode of Retail Review every Sunday!
Posted by luke. at 7:47 AM