Football. It's the most popular sport in the United States - nothing rivals it in terms of viewership, media coverage, and hype. Football is an action packed sport that combines physicality, brutality, and precision skill. People love it... and people love football cards too. It's probably the most broken of the four major sports. Individual box breaks as well as group breaks can be found all over Youtube as well as on live video sites. So, what does football have to offer collectors? Is it a sport that you would consider collecting? Let's take a look at the state of football cards today - what's there to like, and what's not to like! Here we go! 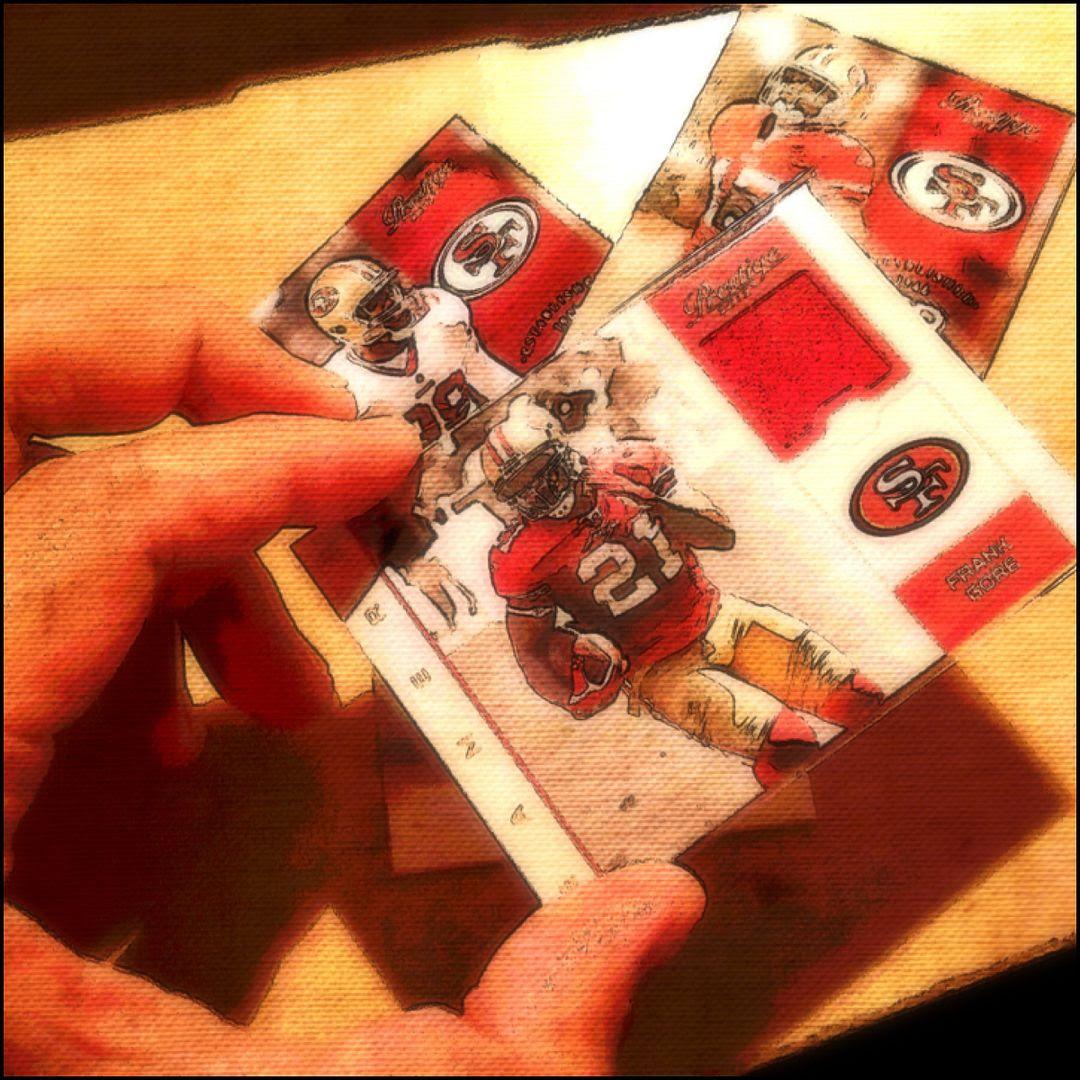 Football cards are HOT. As a hockey card collector, sometimes I find it hard to locate videos or sites that feature hockey cards. Football does not have that problem. It is HOT (did I mention that already?). One of my favorite Youtube channels to watch is Chri5784's channel. He is the owner of The Hobby Box in North Carolina and opens up boxes of cards online for his customers. He's a great fun to watch, check him out if you haven't yet. And while he opens everything from hockey to basketball to non-sports cards... football is the main product I see getting busted. And this is year-round. A lot of football boxes are opened everyday. It just doesn't stop! My local card shop, D&P Sportscards is the same way. Football is king. So if you're looking for something popular - it's football! It seems like just about everyone is into it. If you join in the football fun, you're easily going to find a very strong collecting base that is well-established.

Because so many people are nuts for football, prices for football cards are pretty high - especially the year they are first released. Like with other sports, rookie cards are the hottest kinds of cards year-in and year-out. And football has a ton of rookie cards. Since football teams are so large, the rookie card selection in football can be pretty daunting. Collectors will obviously gravitate towards the hottest prospects first, but once a rookie begins to perform well on the field, their values can skyrocket very quickly. I was able to witness this very thing locally in Northern California. Colin Kaepernick was a rookie a couple years back. He had mild interest from the 49er fans, and his cards sold at moderate prices. When he began showing some success, his cards began to rise in value. Then he got scorching hot when he took the Niners to the Superbowl. People who had Kaepernick cards lying around instantly had gold in their hands. There were Kaepernick cards selling for many times their original values.

Rookies who have hype from the very beginning have high values right from the start. Last year Andrew Luck and Robert Griffin III began their hobby stardom before they even took the field... but since they were able to perform to collector's expectations, their cards maintained their high initial values. Finding either of these two players autographs in boxes and packs would bring instant gratification to any football card collector.

While rookie card hype in football can make for an exciting collecting season, once it wears off, many of the mid-range rookie cards can take a huge fall in value. High player turn-over and injuries are very common in the NFL. A player can easily lose his spot on the team, or fade out quickly. It's pretty common to open up a box of football cards from a couple years back and say to yourself, "Whoa... I remember him! I wonder whatever happened to that guy!" And even the best and hottest players that seem to be 'can't misses' are forgotten pretty quickly in the football world. Let me mention some names... Edgarrin James, Terrell Davis, Jake Plummer, Donovan McNabb... some of these guys had very high card values in the past. Not so much anymore! The NFL is a what-have-you-done-for-me lately-league-to-the-extreme! It's just crazy to see how dramatically prices shift up and down.

And that's what makes me a bit nervous about collecting football cards. It's not a sport to get into if you're looking for a player to establish himself for the long run. While it can happen in football (Tom Brady and Peyton Manning come to mind), it's just not very likely... at all. These longer lasting stars are more easily found in basketball and hockey. I personally feel that football is a 'flippers' sport. The script for collecting goes: buy while it's hot... flip before they tank... repeat the next year. While I suppose that could be said for any sport, to me, it applies the most to football.

The only kinds of cards in football I would consider saving in a PC would be players of a certain team that I was interested in... or quarterbacks. The team aspect of collecting always works. Supporting and enjoying your team through cards is always fun. But aside from that, holding on to football rookies is a losing proposition. Only quarterbacks have really shown the staying power in the hobby. When you think back to great football cards... I mostly think of the quarterbacks. Sure there are some greats like Barry Sanders, Jerry Rice, and other legendary players of bygone eras, but by enlarge football is all about the quarterback position. Those are the guys who people remember leading their team... and it's their values and cards that maintain collectibility over time (if they're lucky!).

So if you're someone who loves football and wants to get into the hobby... you're going to find a very fast-paced and exciting world. For me, it's a bit too fast-paced... but there are certainly many aspects of football card collecting worth getting into - just know what football collecting is all about. If you prefer to hold on to cards in the hope they will maintain value, stay away from football. But if you want the excitement of getting the hottest cards with high (momentary) values, this might be your cup of tea!

Let me know what you thought of this post of football cards. If you have anything you'd like to mention or add-in about collecting football cards, I'd love to read your thoughts in the comments section!
Posted by luke. at 11:20 PM