Team collecting is such a no-brainer to me. If you're a sports fan, you just have to have a favorite team. As fans, we put our passion and loyalty into our teams. We love and support them, so it's only natural to collect the team you like if you collect cards. I understand it can be easier or harder depending on if your team is good or bad though. In lean years, when a team is struggling, it can be hard to want to collect your team... but then again, this may be the easiest time to collect your team in terms of your wallet.

Though pretty much everyone has a favorite team, I can see why some collectors choose not to do it. I mentioned team struggles already - it's hard for many to want to collect a loser! But there are other reasons too. For instance, many love to follow the best talent. In my opinion (and feel free to disagree here), this generation's best consistant talent has been Sidney Crosby. Well, sadly for me, Crosby is not a San Jose Shark. So supreme generational talent and my team don't quite match up. So for talent followers, the team route may not be the way to go. Some collectors just don't want to collect their team. It might be too narrow a focus for them. Certainly collecting a team doesn't help in terms of a return on investment or in regards to speculating on talent (rookies especially) either. So I can see why collectors may not go for a team PC. But if you're newer or haven't considered collecting your team before, now may be a good time to give it a try and see if it's for you or not. There is a lot to like about collecting a team. As with collecting a single player, collecting a team really focuses the collection. I know that I practically ignore everything else that I see. Amazing patch cards of non-Sharks are especially easy to ignore. When the focus becomes that sharp, getting great cards of your team is all that really matters. So when I see an awesome patch of Evgeni Malkin, Rick Nash, or Steven Stamkos... I usually think to myself, 'hmm, that's cool', but there is no strong urge to get it. However, when I see lesser known Shark players like Jason Demers, Tommy Wingels, or Justin Braun with an awesome patch or autograph... I'm much more inclined to go for it. And the great thing is that spectacular team PC piece will most likely go for a fraction of the price of a Malkin, Nash, or Stammer. The Cup rookie shown of Wingels above can be had for well under $30 if you are patient on sites like eBay. 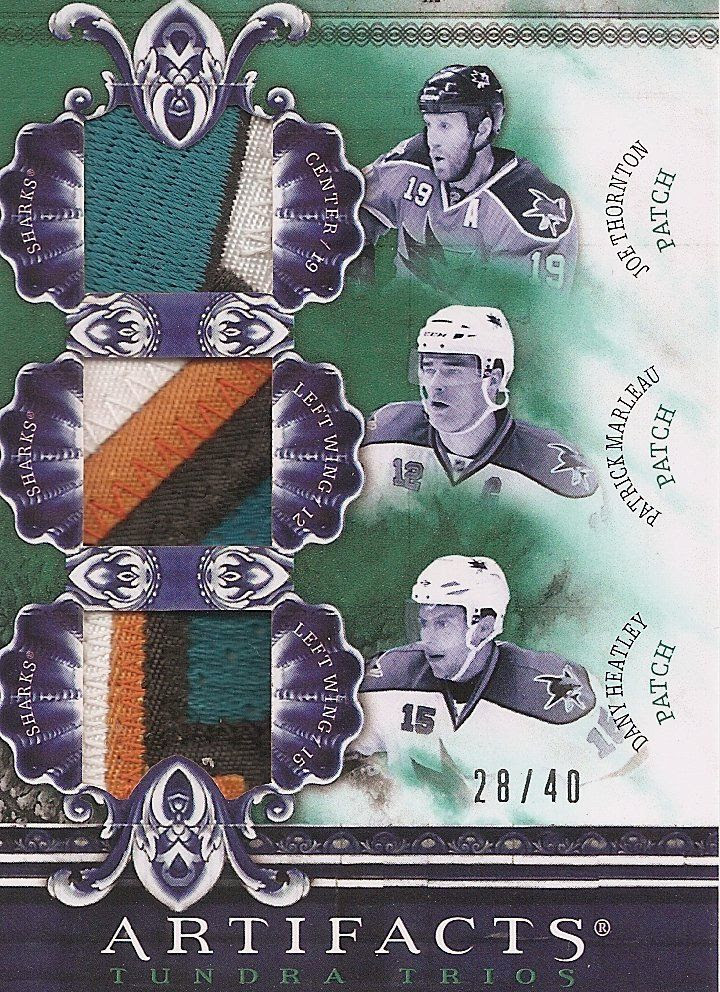 It's awesome to have a growing collection of my favorite team. The card companies do a lot of team related cards to get collector interest up. My favorite team-centric cards are the ones that feature multiple players and memorabilia and/or autographs. On the Upper Deck side of things, Artifacts in particular is a set that has a wealth of cool multi-patch cards. Finding the ones with three crazy patches on one card is always exciting. From Panini Contenders, some teams have six-way autographed booklets. The one I have of the Sharks is one of the favorite cards in my collection. Higher-end products from both companies as well as ITG feature some sweet cards of multiple players from a single team.

When it comes to what to collect, you have to decided what you want. For me, I collect both memorabilia and autographs of Shark players wearing Shark jerseyes and that have the team listed on card as Sharks. I keep base cards and inserts, but I don't really consider those cards part of my Sharks PC. I know that other collectors will collect all players who have ever played for their team - even cards that depict players in other team's uniforms. I think it's cool to do that because sometimes card companies do not release of a card of a player that only played with your team for a short time, but I just can't get past my own pet peeve of wanting onlySharks gear and logos on card. See... to each his (or her) own!

Finally, one of my favorite things to do is show off the team PC. If you want to check out my Sharks PC, feel free to click on the links on the right side of my blog, they will lead you to them! If you've never considered going for a team PC before, give it some consideration. It has definitely been a worthwhile pursuit to collect the Sharks for me. I hope that you can find enjoyment in collecting your team as well!

Let me know about your experience collecting your team! What have you found good and bad about it? Leave a comment!
Posted by luke. at 8:49 AM