Wow, what an epic weekend of card reviews for The Cardboard Review! Earlier today two basketball reviews were posted, and now... here's a third one for you! This review is the first ever baseball product review on my site! Huge thanks to Tracy at Panini for providing this box for review. If you watched the break video, I must apologize for the name pronunciations! I thought hockey was traditionally the difficult sport for names! 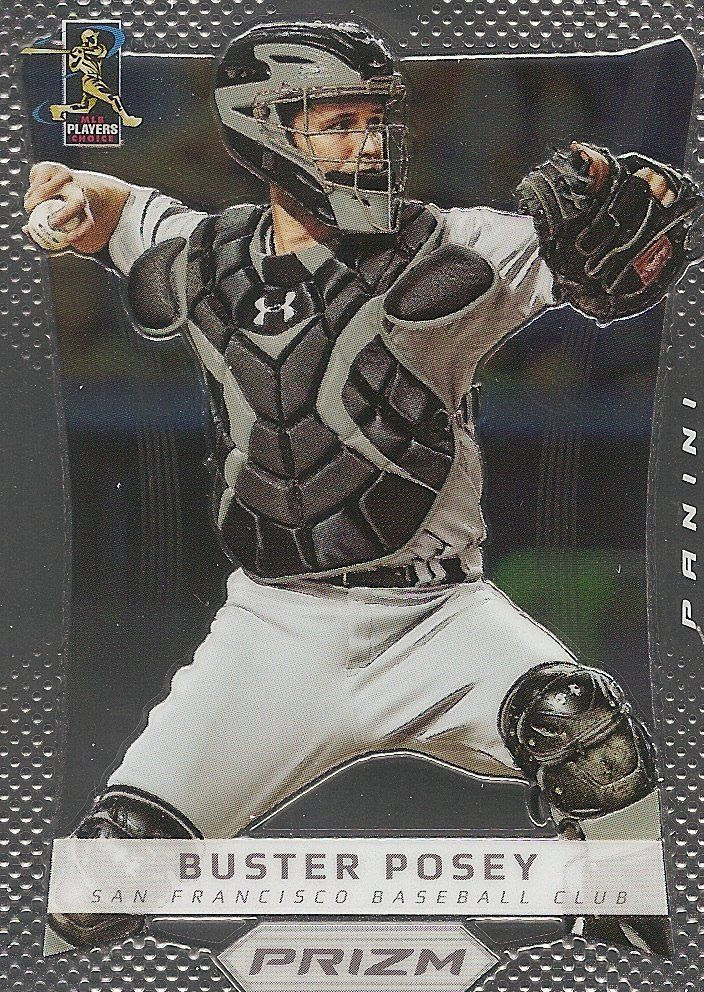 Base Card Design -
Prizm baseball is the third iteration of the Prizm card line. Panini had previously released Prizm for both football and basketball, both with high collector interest. This baseball version looks to continue on the success these cards have already had. The Prizm base cards come on a sturdy foilboard cardstock. This is the first time I've encountered a Panini Prizm card, and it shocked me a little. These base cards are firm and rigid... very much unlike, say, a Topps Chrome or Finest card - which is what I first expected them to be like. Those cards tend to bow naturally over time. I do not foresee that happening with these cards. These are tough little base cards!

In terms of design, the cards are very shiny and reflective. Though the card is all foil, Panini has chosen to give the card different textural elements. The borders, for example, have a bumpy, pounded metal look to them. The use of clean graphics and fonts give these base cards a very current feel, though with a hint of nineties mixed in as well. An aspect of these base cards that I found myself particularly enjoying was the background. Though these Prizm cards have a solid silvery border, Panini chose to include a natural background within it - rather than just having the entire card silvered-out. It's a nice contrast seeing the soft focus background and the bold player amongst the rest of the card - it all blends nicely.

Worth noting is that since Panini does not hold an MLB license, they cannot use official team logos or names on the cards. You'll see a Player Association logo and the city they play for, but that's the extent of the identifying information Panini can include. 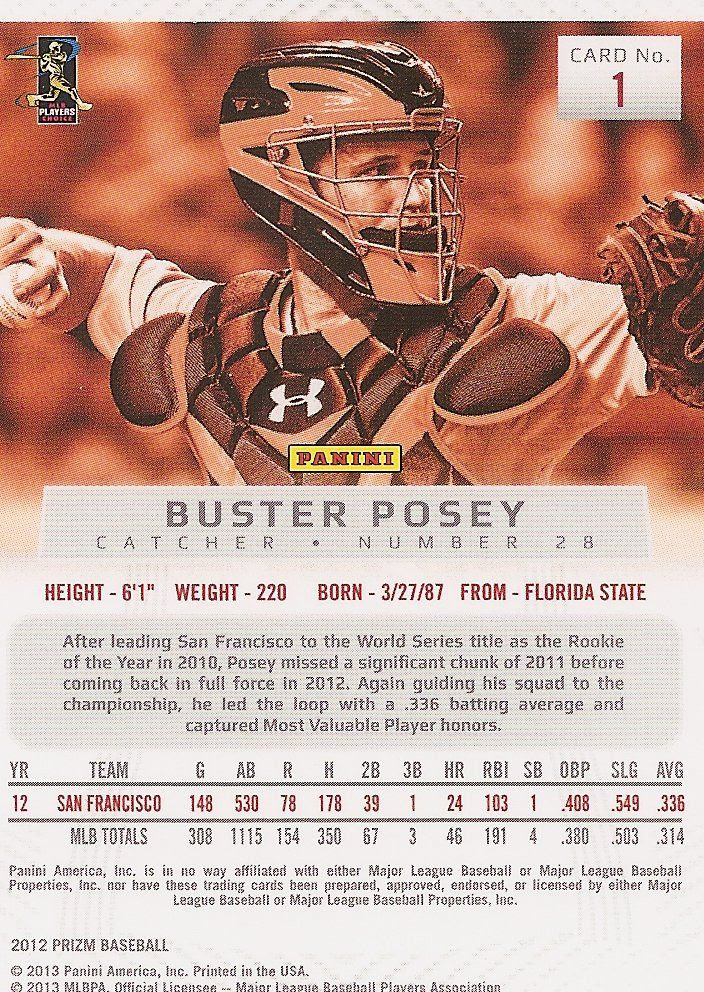 The back of the Prizm cards have a wealth of information for collectors to look at. Though the cards only carry one line of statistics, Panini has included full write-ups for collectors to read and learn from. The designers have chosen to use the same image on both sides of the card. While the front image is in full-color, the back is done in a dark sepia-type tone. Like the front, the back is laid out and presented well. All the elements come together cohesively. 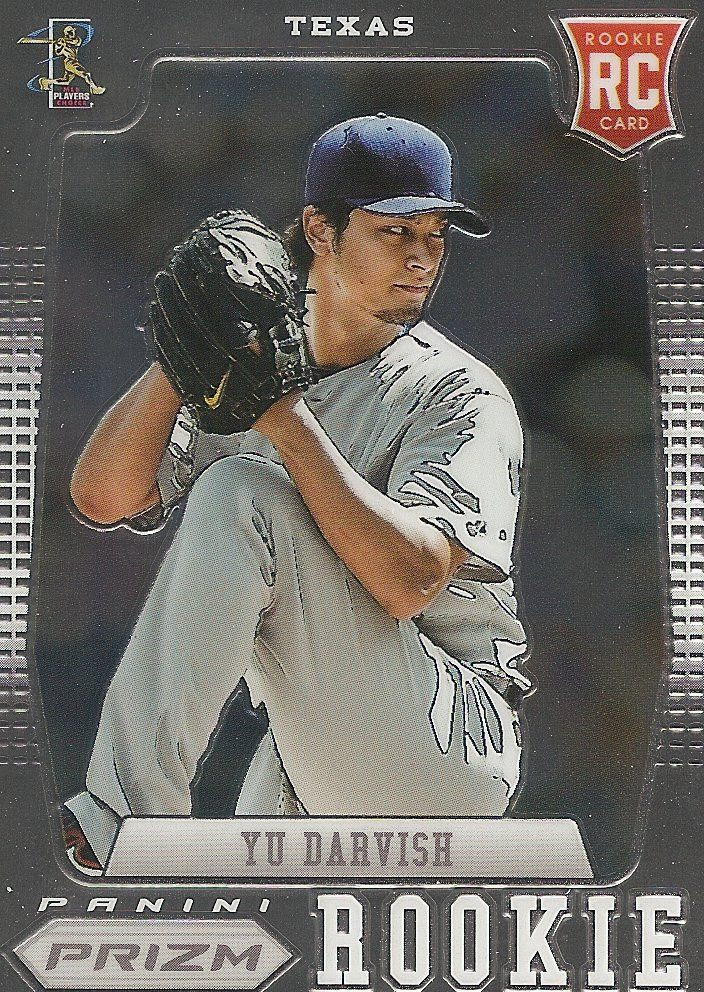 Rounding out the base set are the Prizm rookie cards. Though the design of these rookie cards are very different than their standard base card counterparts, the Prizm foil technology instantly connects the two. In a way, it's good as it makes all the cards within the set uniform... but at the same time it shows that the foiling technology can negate design differences that usually make the cards stand apart from each other. Perhaps the use of a different color foil would have been a nice way to differentiate the cards a bit more... but then again, the designers could have been going for that total uniform set look that I mentioned earlier. And if that were the case, they hit a home-run with that effort!

Inserts/Game-Used/Autos -
The Prizm box states that there should be two autographs per box. Autographs can range from the newest prospects to current players to retired stars. Inserts and parallel cards can also be found within Prizm boxes. Unfortunately, there are no jersey or patch cards inserted in 2012 Prizm Baseball. 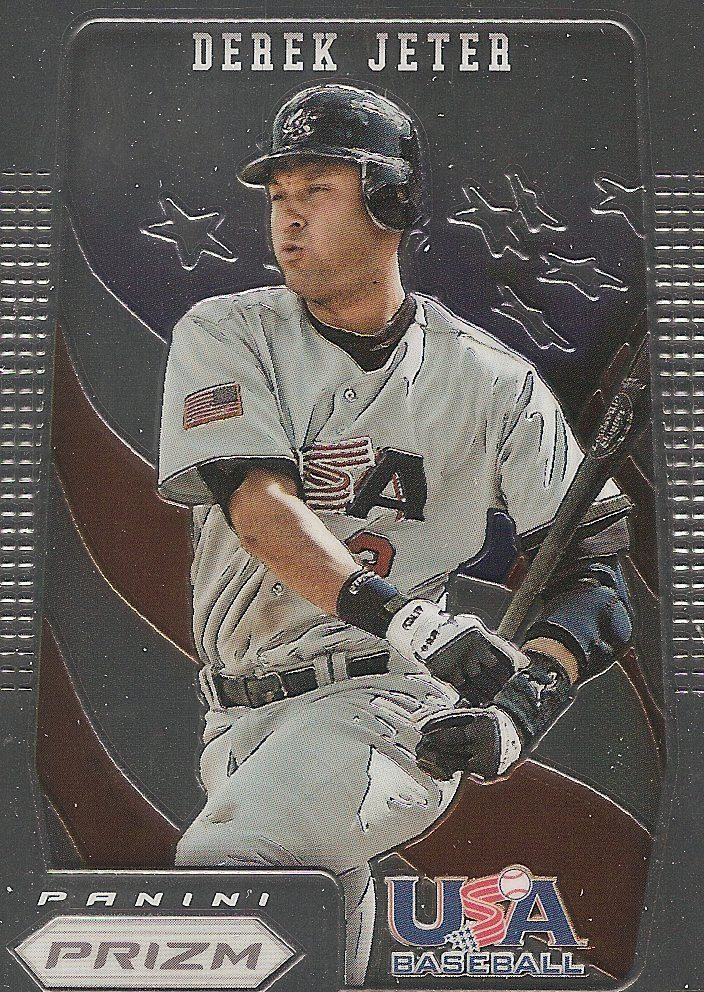 The insert cards found in Prizm all have unique designs, but as I mentioned with the rookie cards, it can be hard to differentiate these cards because the foiling technology renders all the cards too similar to each other. This Jeter insert is an example of a great look - the United States flag in the background - but in a stack of other Prizm cards, this card could get lost in the mix. Some of the other inserts, such as Dominance and Brilliance, do have more radically different designs, but they all share that same problem - they just feel the same! These inserts remind me of the ones you'd find in a standard Score release where most of the insert cards are printed on the same cardstock as the base cards. To me, inserts need to be set apart more from the base cards... otherwise, just make them a subset at the end of the base set. 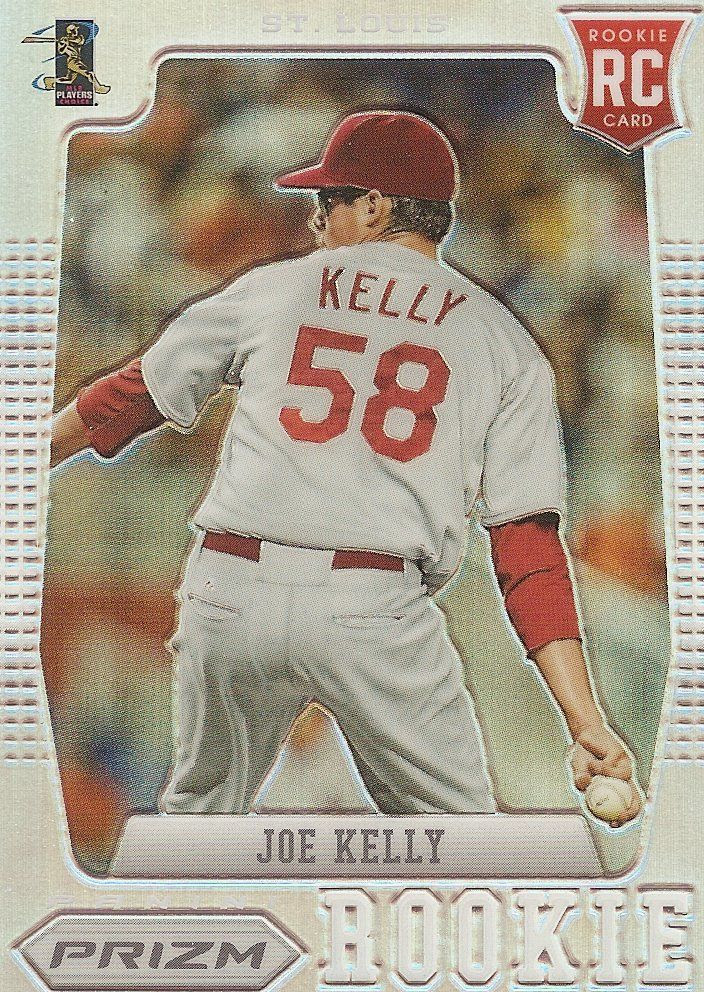 Can you see the difference between this Joe Kelly card and the Darvish above? Hopefully you'll notice that this card is has a brighter hue. Scans cannot pick up the difference well, but in person, you can clearly see that this is a Prizm parallel card (similar to a Topps Refractor). While the standard inserts do not stand out in a big stack of cards, these Prizm parallels do, and collectors seem to love the different levels of parallels that you can find. This particular parallel card is the most common type to get, but there are those that you can pull that have different textures and colors associated with them. The rarest versions are numbered to ten or less! 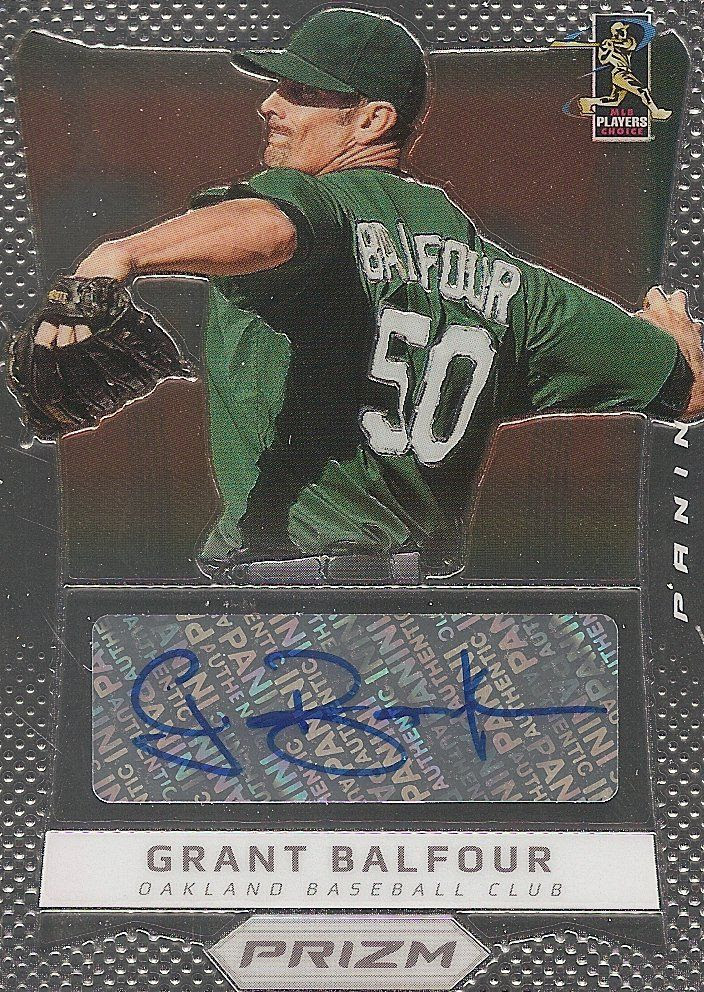 The standard autographed cards are parallels of the base card design with a space allocated for the signature. Many collectors, myself included, would prefer a hard-signed card, but at least these autographs are done in a very clean, well-presented way. The blue ink used looks good with the silver foil backing. Besides the regular version of these cards, you may be lucky enough to find a Prizm parallel numbered to only 25. 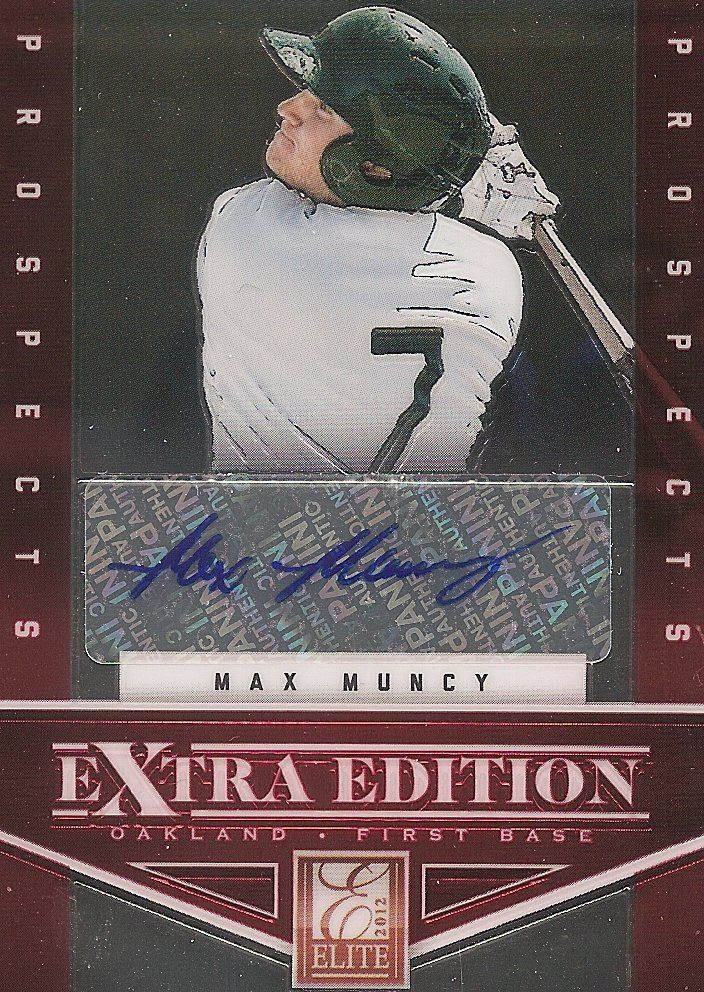 Mixing it up a little are these Elite Extra Edition base and autographed cards. It was an unexpected pleasure to find these cards within my box. I wonder if these hits were bonuses, as this was the third autograph out of this box. After going through a ton of Prizm cards, these red-themed inserts were definitely a breath of fresh air. Seeing these Elite cards come out made me yearn for some more variety in Prizm. As this brand was so popular this year, hopefully when it returns next year, there will be more varied content to be found!

Overall Rating -
Even though Panini does not hold an official MLB license, they amaze by creating great looking and desirable cards. Prime Cuts was an example of that, National Treasures was the same, and so is Panini Prizm Baseball. Unlike those other two that I just mentioned, Prizm is affordable for the mid-level collector. Boxes of it can be found for under $100. And with twenty packs per box, it makes for a very fun opening experience.

Prizm has already established itself as a strong product in the Panini pantheon of card lines. Collectors know to look for the limited parallel cards and autographs here - Prizm is definitely a solid bet to buy. I recommend for baseball collectors of all levels.

Check out my box break of 2012 Panini Prizm Baseball: