How would you like a massive, rookie-centered basketball set with a ton a different card designs and textures featuring thick card stock and shiny foil? If you said 'yes' to all of that, then the new Panini Marquee Basketball is for you! Marquee Basketball is one of the boldest products to come out in a long while. If these cards were people, these would be the ones who stand out in a crowd. 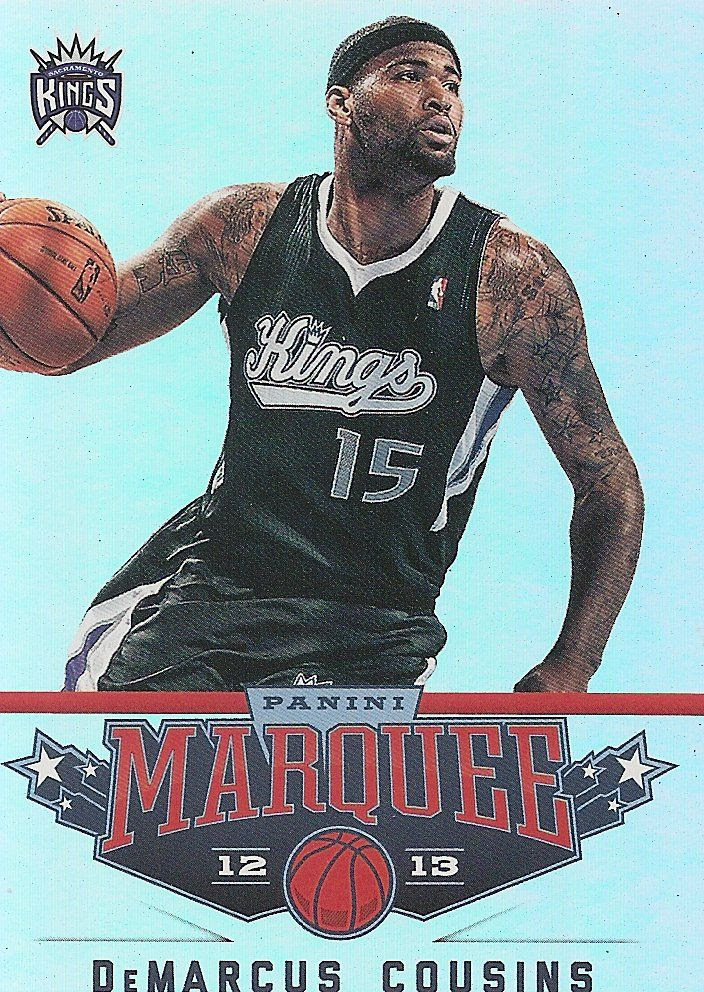 Base Card Design -
The main base set in Marquee is 540 cards large. No, that is not a typo. Five. Hundred. Forty. Yeah, it's big. And within those 540 cards are different subsets with an amazing variety of designs. The first type of card to be found within the set are the commons and legends. These cards are what I would consider to be the 'standard' Marquee card. Both the common and legend cards share basically the same look, the only difference being the word 'Legends' replacing the team logo in the upper left hand corner. As you can see from the DeMarcus Cousins base card above, the card is printed on very shiny foilboard. It's a very clean design that emphasizes the player and the card brand. There is no background or fancy bordering or other graphical enhancement... none of that is required. The card boldly shows everything it needs to and nothing more. Unfortunately, the scan above doesn't show the rainbow effect of light shining on it, but in person, the card reflects a beautiful spectrum of colors. Basketball is a big man's sport, and with everything on this card being 'big', I feel that this design is very appropriate. Also 'big', but maybe 'girthy' would be a better word, is the thickness of the card. The commons and legends are given the thick cardstock treatment. It's a nice touch that makes the cards feel more premium. 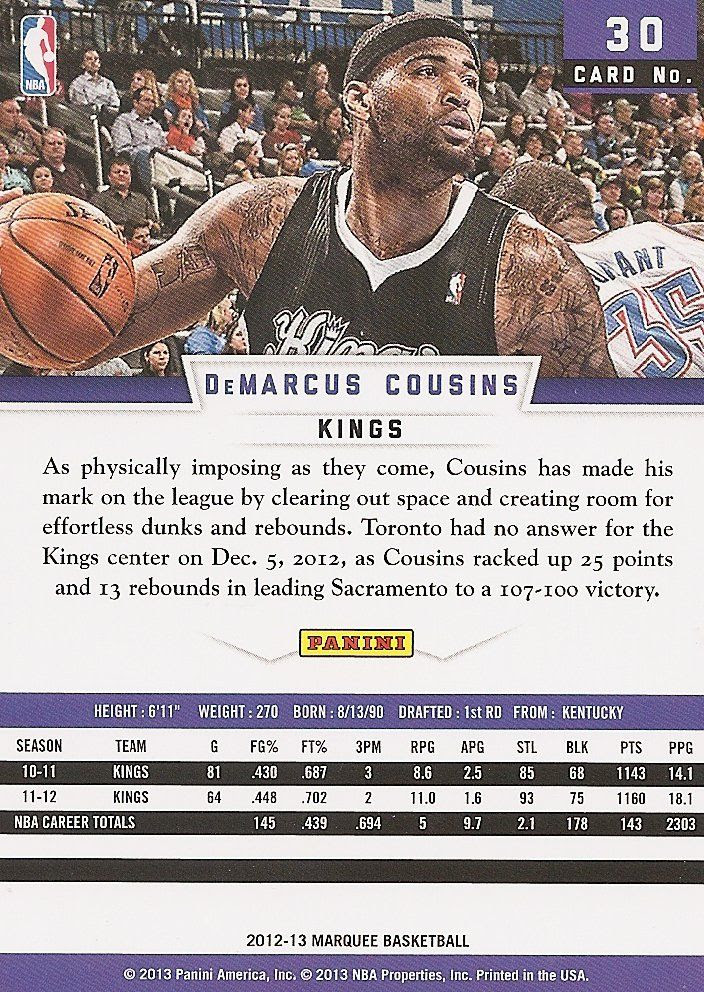 The back of the Marquee base cards add in the color, background, and graphical elements that the front left out. It makes for a very nice contrast! Though the front and back seem very different in nature, there is a common thread between the two. Tying the front design to the back is the photo. Notice that the photograph on the front is the same as the one on the back. Usually, I would say that using the same photo on both sides is lazy... but in this case it's actually pretty cool. The reason it works is because the back photograph restores the background that the front left out. Now you can see a bit more context to the photograph. It's a sweet idea that the designers of the card put in - major props for that sneaky maneuver! Give those guys a raise! 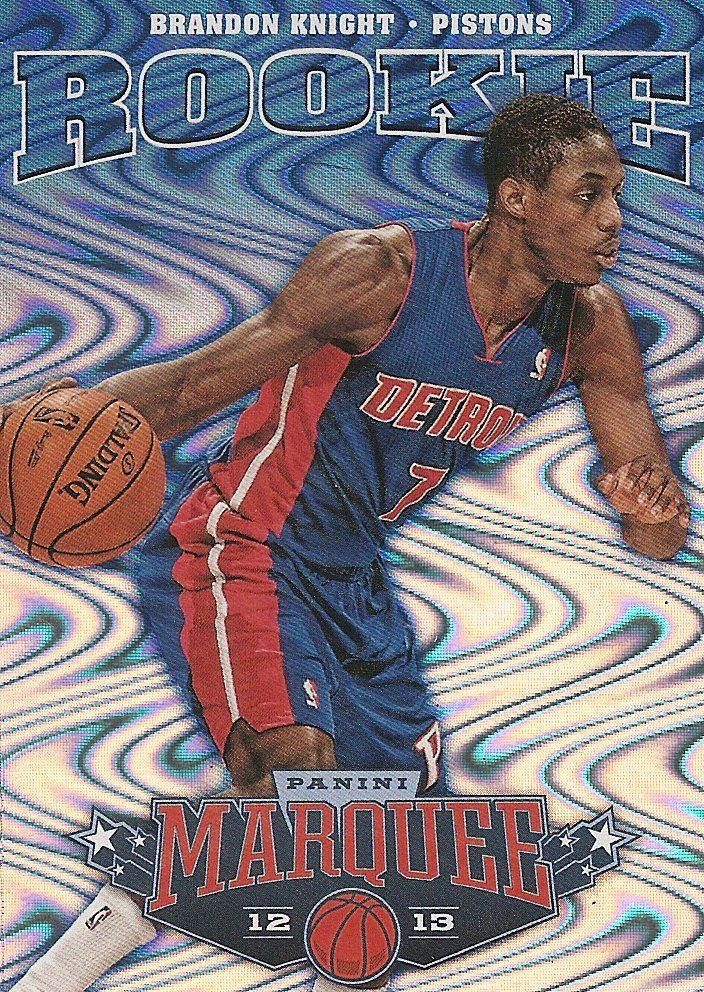 After the common and legend cards come the parade of rookie subsets.The first one has an absolutely awesome (and appropriate) name - Swirlorama. This radical design is hard not to like. The swirled foil look is mesmerizing and reminds me of the older basketball inserts from the nineties. There isn't any real refinement to this design... it's all in your face with so many colors jumping out at you. It's a great look, and one that younger collectors could certainly gravitate towards. 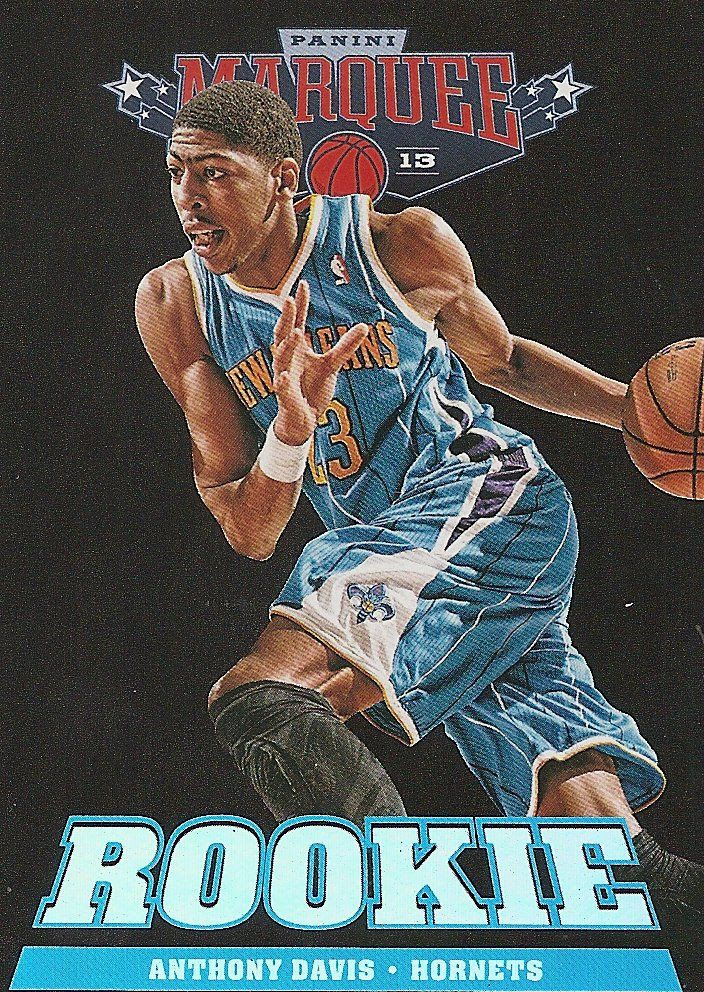 Next are the Black Holoboard cards. Like the Swirloramas, these cards are on foilboard. But rather than giving off a bright, crazy feel, these have a subdued look. For my tastes, the look is not subdued enough. The black holofoil background is great looking in its own way. The darkness of the card is such a great foil to the Swirloramas, but the dark effect is negated by the gaudy 'ROOKIE' logo located towards the bottom of the card. That big glaring sign ruins the look for me. It could have been the serious version of the Swirloramas, but because of that, this design falls a bit short. 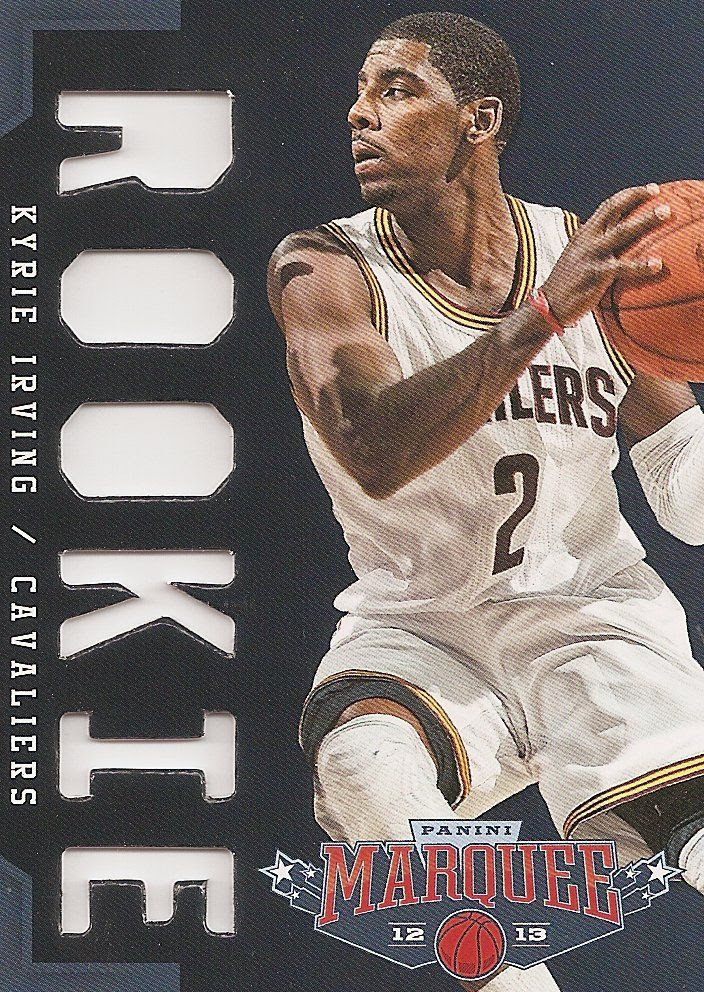 The Lazer Cuts follow after the Black Holoboard cards. Like those, these are darker in nature. The players are set on a black background. Unique to these cards is the word 'rookie' die-cut out of the left hand side of the card. It's nice that Panini can show off its die-cutting skills, but these cards remind me too much of jersey die-cut memorabilia cards. To me, I feel that there should be a jersey or patch piece there... instead there is just empty space. It leaves me wanting just a little bit. And just a little nit-pick about these cards, the holes sometimes get caught when putting them into penny sleeves. Not a big deal, but something to be careful of. 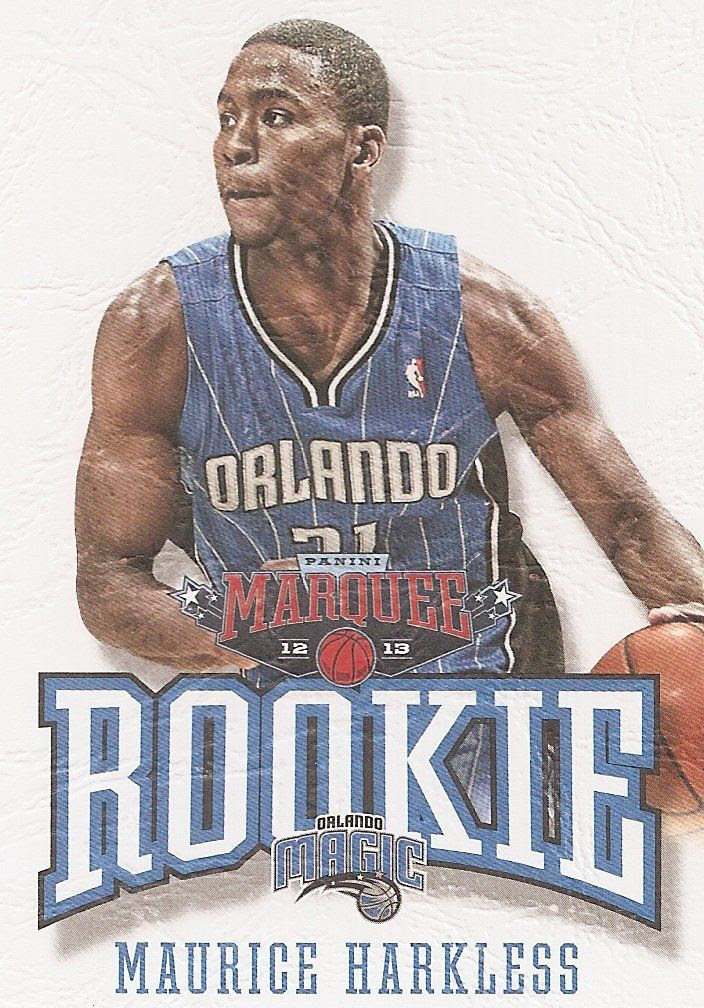 One of my favorite things that card companies can do to cards is to add texture. Panini has done this with their Leather rookie subset. These cards have a smooth leather feel to them and feature a textured background. I found it interesting that instead of using the orange of a basketball, the designers chose to use white for the background. It was a smart choice though. The white background gives the card a classic look. Orange may have been too distracting a color for what they were going for. The rookie logo on these cards compliments the classic feel. This subset is a winner. 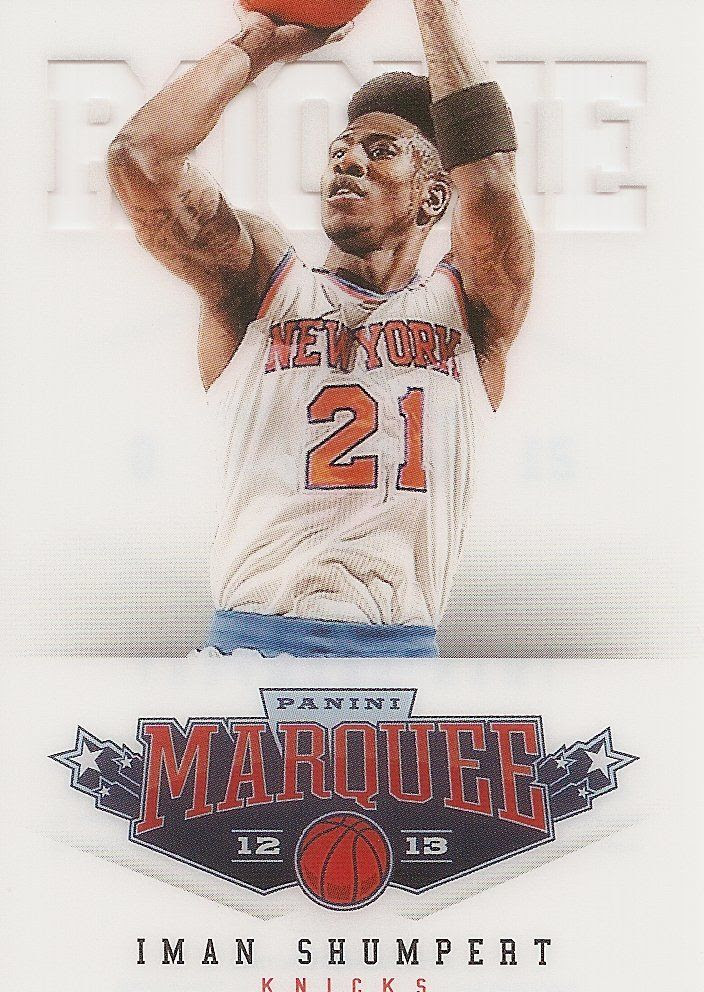 To finish off the main set of cards Panini gives us the White PETG rookie subset. These last cards are very nice. They are ghosted white acetate-like cards that have a thin, bendable feel to them. Out of all the subsets, these feel the most modern of all. The top portion of the card features the word 'rookie' as a clear window through the card. Unlike the Lazer Cuts, these are not physically cut through, just see through. It makes the card feel more complete. Having the players partially in front of the window gives these cards a three-dimensional effect that I appreciate. These cards were a great way to finish off the Marquee set.

Inserts/Game-Used/Autos -
The main emphasis of Marquee is the core set and all the rookie sets therein, but also found in boxes of Marquee are autographs and a few different types of inserts. There are no game-used memorabilia cards in Marquee. 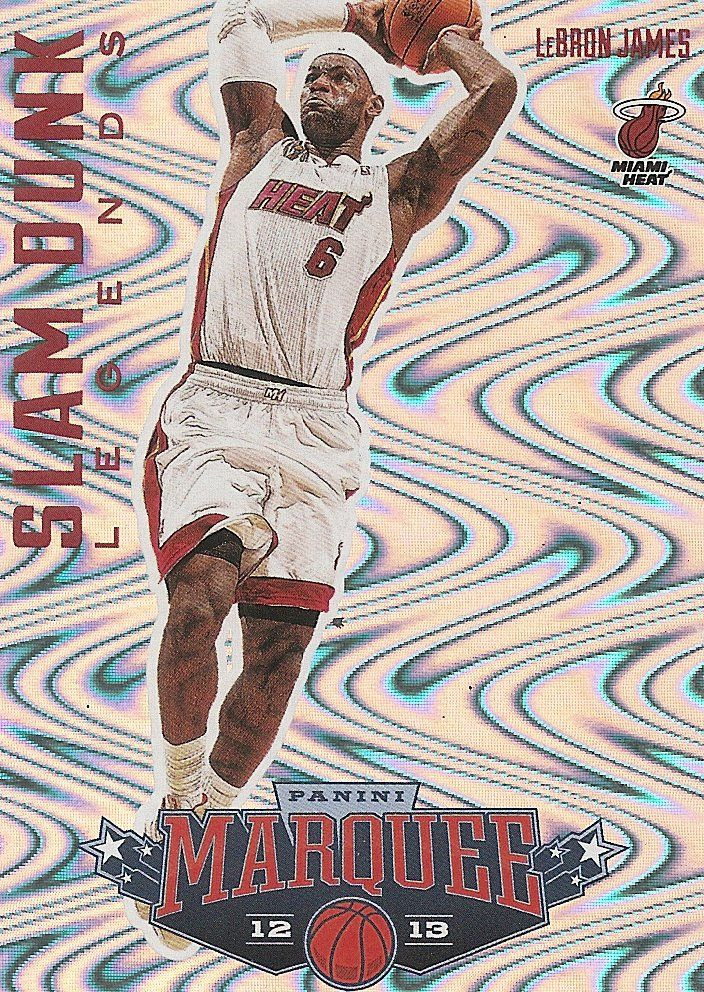 The insert cards found in Marquee share similar design concepts as the rookie subset cards of the main set. The Slam Dunk Legends have the same swirly foil effect as the Swirlorama cards. They are different though in that the Slam Dunk Legends are given silver foil treatment rather than the mult-colored Swirloramas. 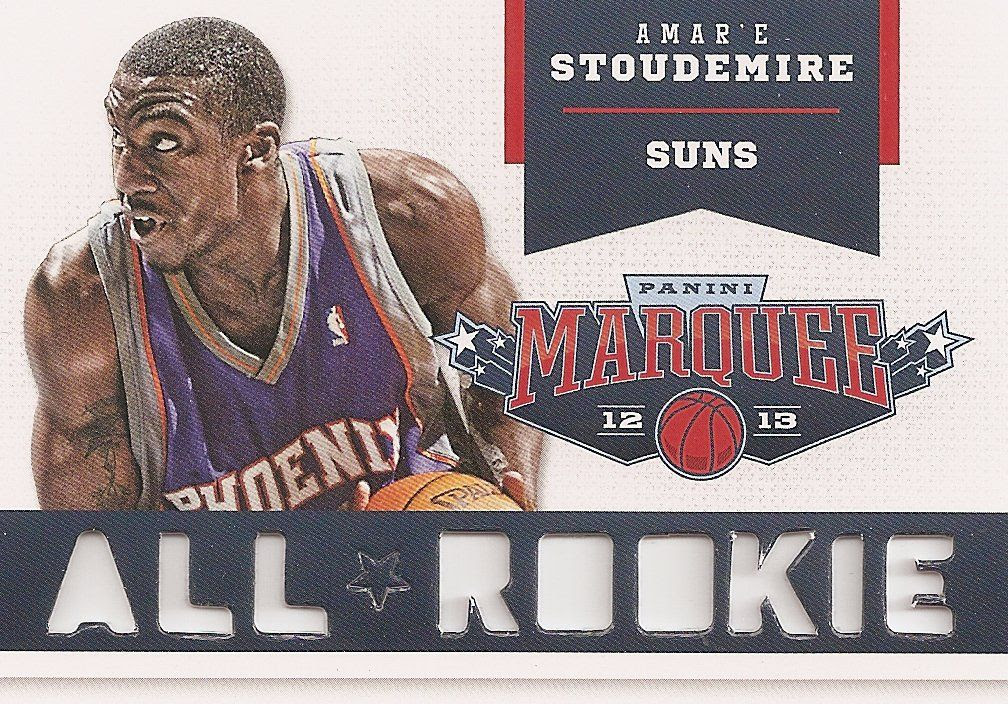 The All-Rookie Team insert is a take on the Lazer Cuts. Though this insert set is called 'All-Rookie Team', it actually is a celebration of current NBA stars when they were rookies. So again, like the Slam Dunk Legends, these are NBA veterans rather than first-year players. 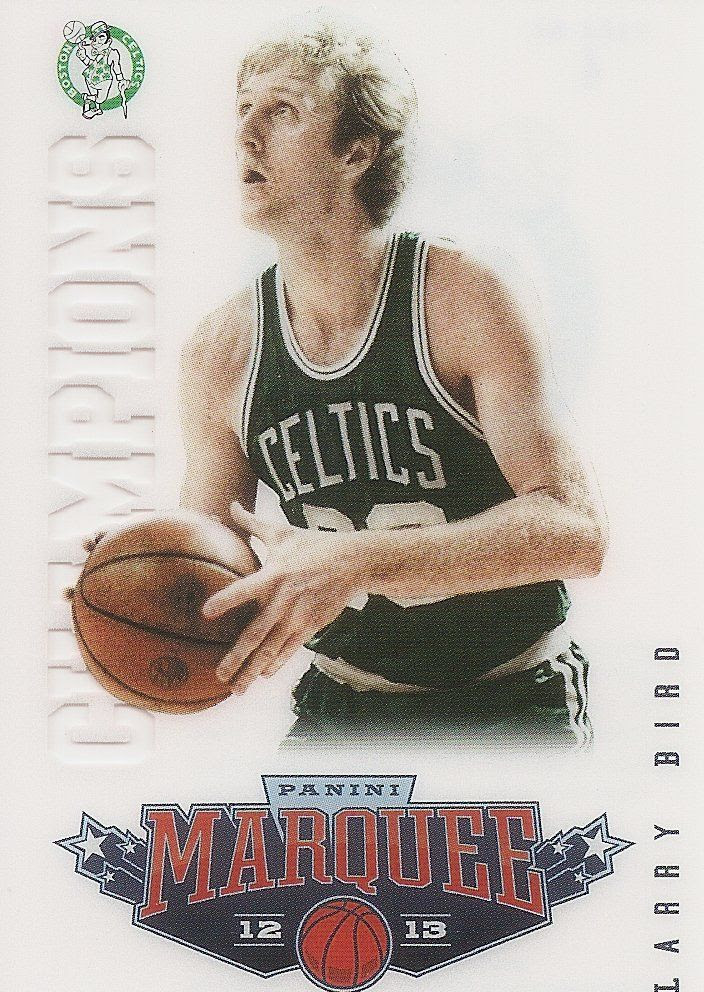 As you open Marquee you'll notice the similarities of the insert cards to the rookie subset cards. I wonder if it was Panini's decision to directly have a tie-in between the inserts and subsets. If it was, that would certainly be interesting. I definitely have to give it to Panini in terms of their recent card ideas. They have really invigorated the hobby with all the innovated ideas that they put out on the market. I applaud them for their ability to take chances and risks with their designs. 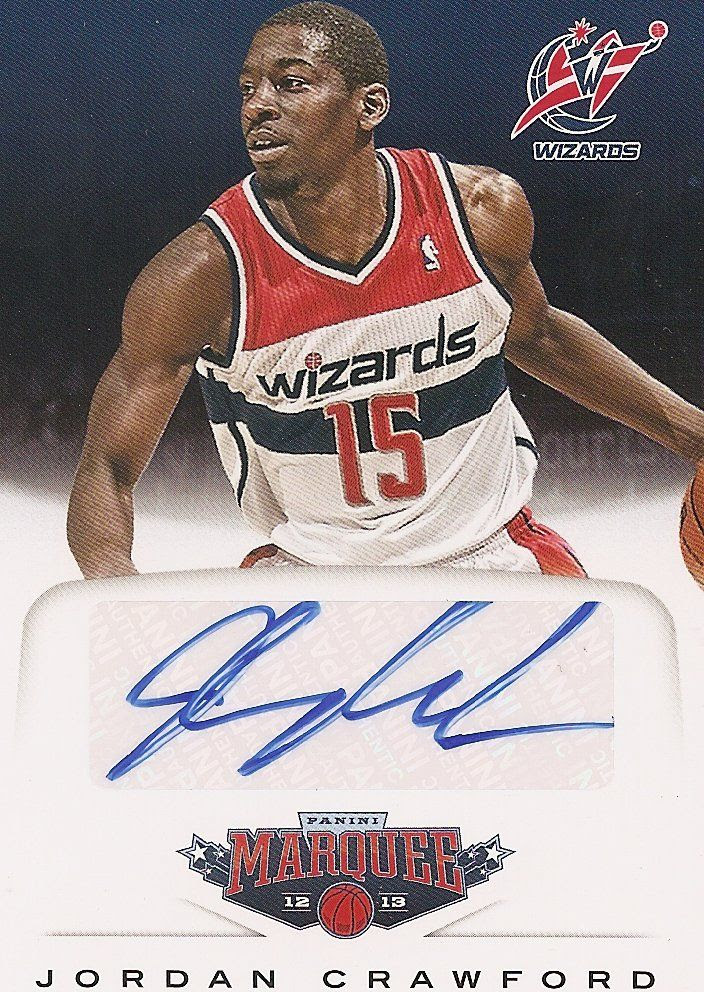 Aside from inserts, each box of Marquee should yield three autographs. The autographs that I received have been sticker autos, but that seems the norm for a product at this price point. As wild and as creative as many of the cards in Marquee have been, I was a little underwhelmed by the standard autographed card. The Jordan Crawford shown above is a cleanly enough design card, but it doesn't match up with the flair of the rest of the set. There are other autograph inserts sets to find in Marquee, perhaps they have more interesting designs, but the ones out of this box left me wanting a bit more.

Overall Rating -
The new Panini Marquee Basketball is great fun to open and enjoy... and the price is right for many collectors. At about $100 per box, and 20 packs per box, collectors will have fun looking through and sorting out all the wild looking cards that they find within. Marquee is a product I would recommend for younger collectors who can afford it. The cards are full of pizzaz and wow factor. There are a ton of rookies to find and get excited about pulling. I have seen first hand some younger collectors go nuts over Marquee. It's the prefect mid-end, affordably priced product that feels more premium than it actually is.

For the seasoned collector out there, Marquee doesn't offer as much. While it's nice to look forward to three autographs in a box, the content may not satisfy those with high-end tastes. These boxes definitely offer some solid insert card content... but patches and patch autos will not be here. Also missing are low numbered parallels to chase.

If you're looking to have a great time, Marquee is a great product to bust. It's full of fun. It'd also be a great set to try and put together. At 540 cards it would be a challenge... but one that is certainly doable!