In the Game releases their yearly goalie centered product - Between the Pipes (BtP)!!! Goalie collectors around the globe can now rejoice! This yearly staple of the ITG line-up is moderately priced and contains a generous amount of packs per box. While fans of the masked men will undoubtably enjoy busting these boxes and packs, it may not have enough variety for everyone. Let's see what a typical box of BtP yields! 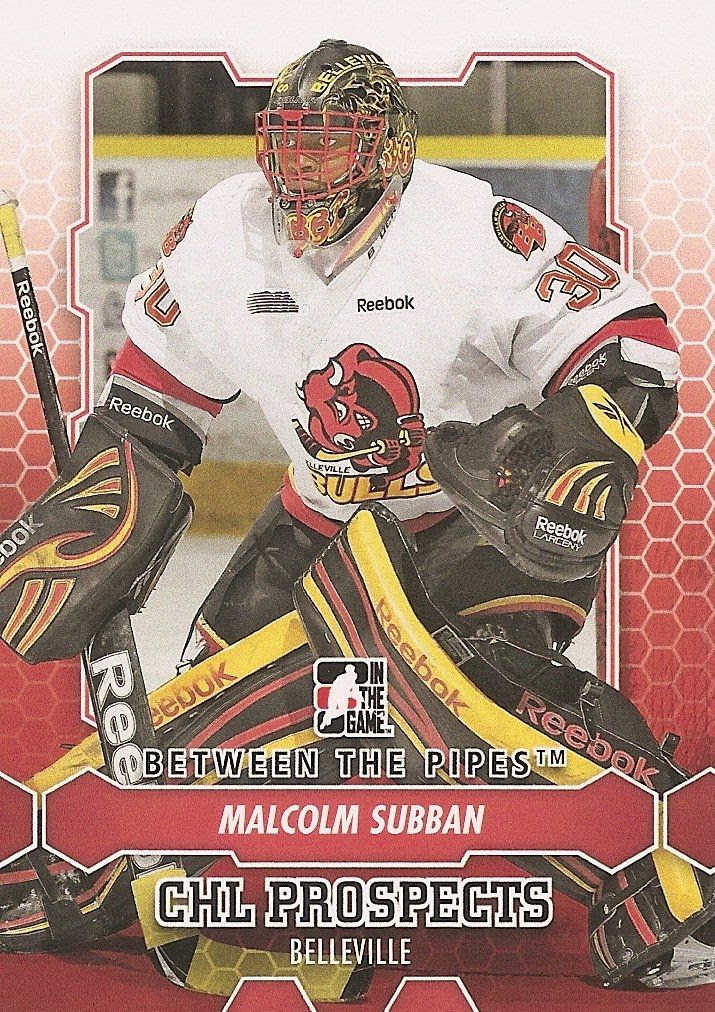 Base Card Design -
The main base set comes in five distinct 'flavors' of cardboard: CHL Prospects, Decades, International Stars, Stars of the Game, and Record Breakers. The CHL Prospect and Decades subsets dominate the majority of the main card set. The base cards feature a colorful, graphic-laden design full of geometric shapes - primarily hexagons. You can see the hexagonal theme clearly in the Subban base card example above. While I do like the fact that the cards really pop, the design as a whole feels a little dated. I've used the word dated to describe ITGs designs before, and unfortunately it's been a fairly consistant complaint of mine in regards to their products. ITG's Heroes & Prospects, which is a very similar product to this, released earlier this year with some fresh looks and ideas for ITG base cards. I feel that these BtP base cards took a step backward from H&P's forward progress. 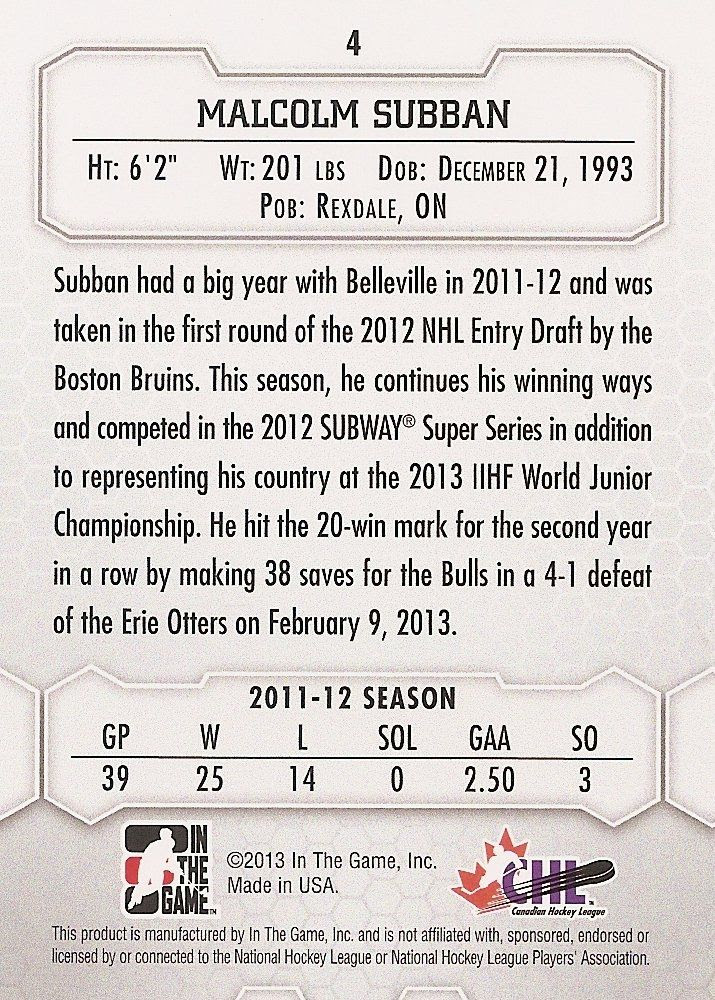 The back of the card is again standard fare for ITG. Though the backs are pretty simple in design, I do appreciate the fact that the designers made the effort to incorporate some of the front's attributes to the back - the graphical elements match up very well. As with almost all ITG base cards, there is a written paragraph of information about each player. All the vital information is included at the top of the card while playing statistics are located towards the bottom. 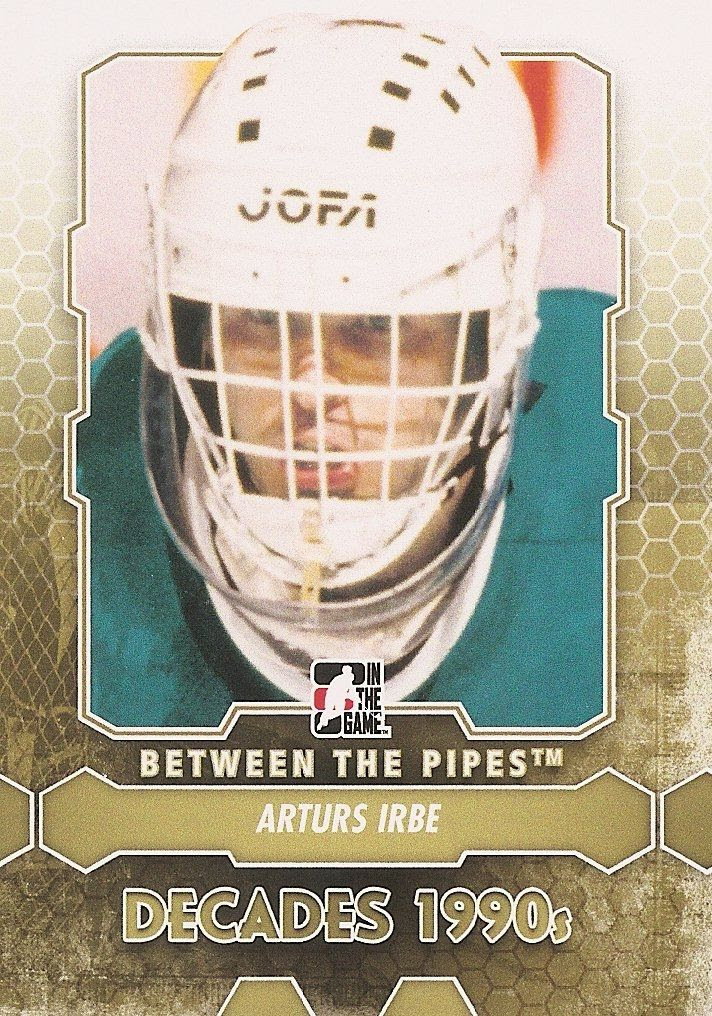 It is well known that ITG does not have an NHL license to produce cards. This limits their selection of photographs in a major way. ITG is forced to choose only very specific photographs, or crop photos down so that all team logos are avoided. And since ITG comes out with a pretty sizable product line year after year, sometimes they must use the same photograph over and over, year after year (The Irbe above looks awfully familiar). That's really too bad as it gives the sense that what you are buying is the same each year. I know that ITG does their best with what they have, but it does detract from the cards they produce.

Inserts/Game-Used/Autos -
Each box of 12/13 Between the Pipes will come with an array of inserts, game-used cards, and autographs. ITG has had the reputation of producing some of the best game-used cards available, and their sticker autographs are some of the most 'un-sticker' like that can be found in the hobby. 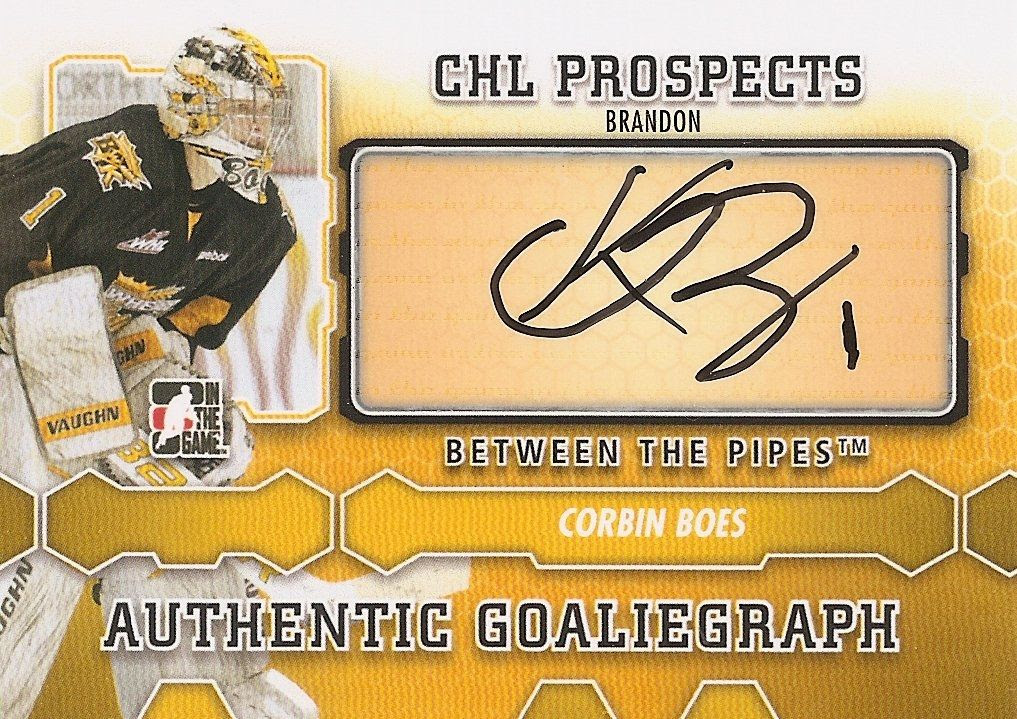 The standard autograph card in BtP come in the form of these horizontally oriented cards. These Goaliegraph cards remind me of many of the past ITG autographed cards. I'm not sure if that's a good thing or a bad thing. It's good in that the cards have an ITG identity. Looking at the card, a seasoned collector could tell that it was ITG and not something made by Upper Deck or Panini. But on the other hand, the design of these cards have been consistently plain. They don't have the wow factor that other companies have. If thinking on similarly priced products, SP authentic Sign of the Times autographs have always looked amazing... they look so good that it makes collectors want the entire set on their looks alone. While these autographs are nice, I can't say they cause collectors' hearts to flutter. They are just... nice. 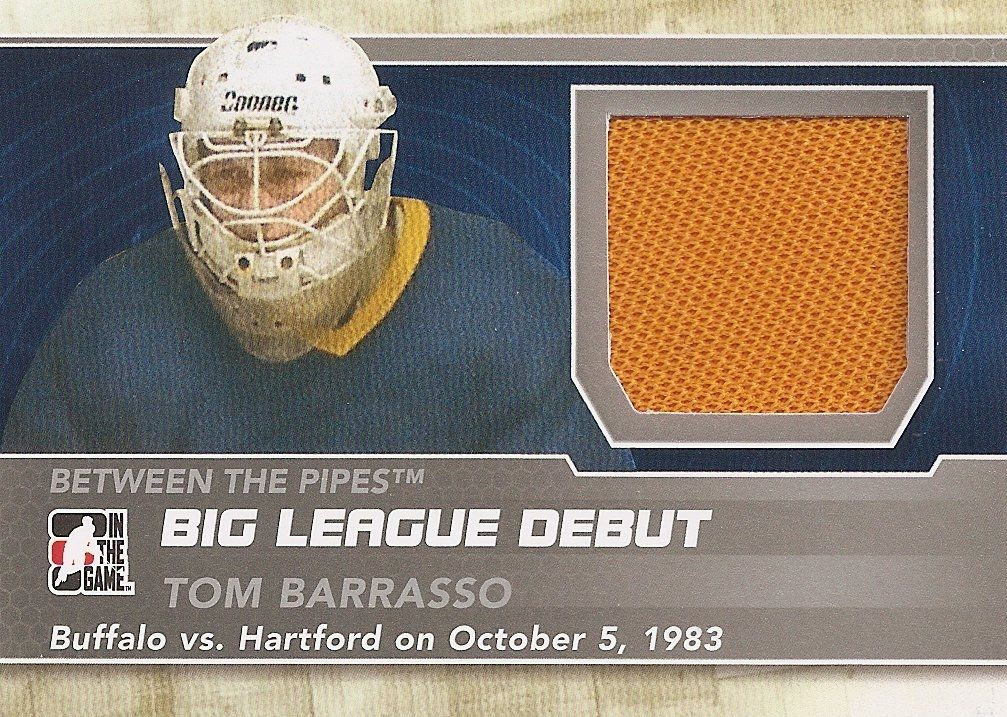 As for game-used cards, here is another example of something very, VERY plain looking. This card was so shockingly plain that it surprised me a little when I pulled it. But he funny thing is... I kinda like it... A LOT! For whatever reason, this card looks awesome to me. This card lacks everything... team logos, fancy font, crazy designs... but it's cool in its plainness. This jersey card will never fetch a great amount on eBay, probably won't be very good tradebait, and isn't particularly limtied... but like I said... I like it! 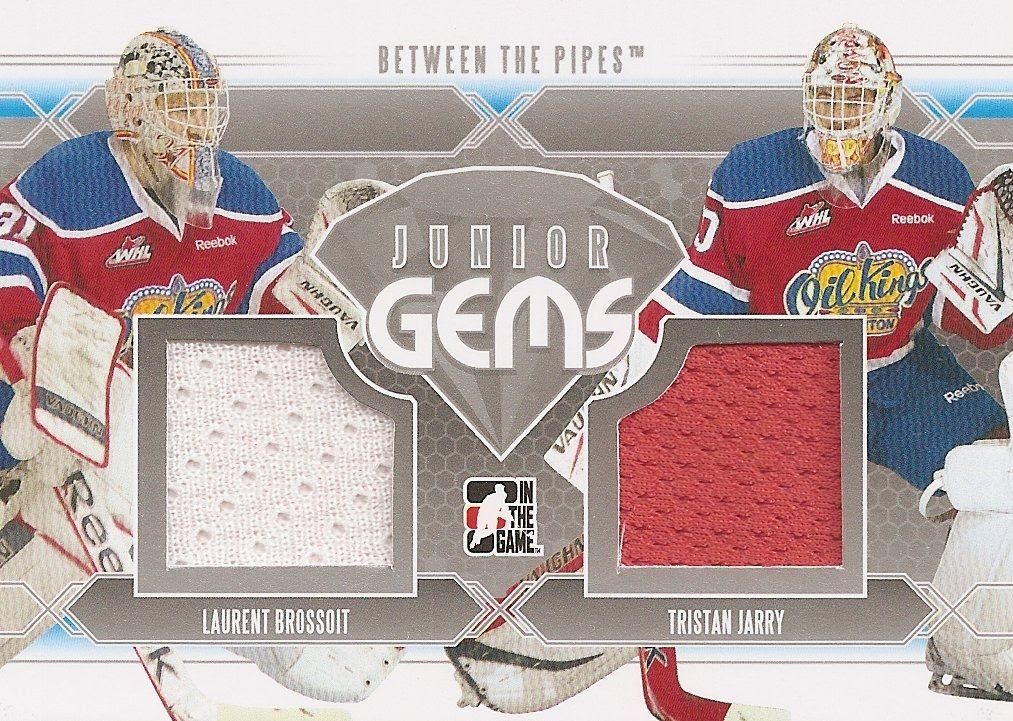 This dual jersey card is almost the opposite of the Barrasso jersey. It features two swatches from two different players, has graphical design elements, and a fancy 'Junior Gems' logo... but this card just doesn't do it for me. To me it's more generic than the Barrasso card. Perhaps I just think it's too all-over-the-place in terms of design... that could be it... but overall this card is probably my least favorite hit from my box. 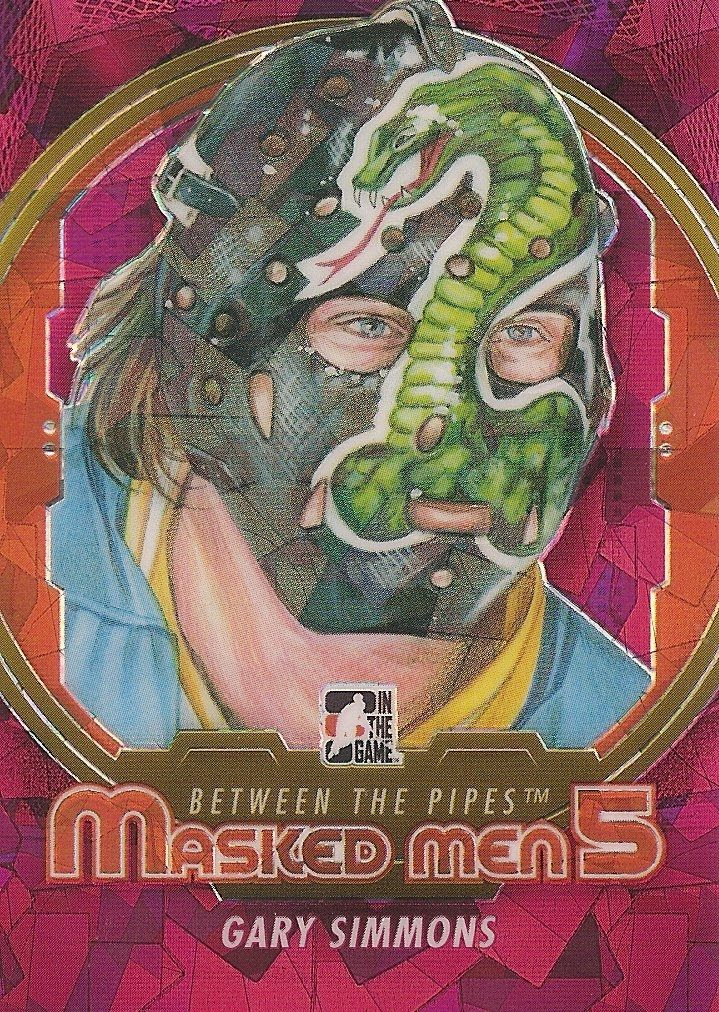 The best cards in the new BtP have to be the Masked Men 5 foil inserts. These cards are absolutely spectacular. It doesn't show it in the scan above, but the way the cracked foiling looks in person cannot be replicated on a screen. I LOVE the way these cards look. I mentioned that Upper Deck Sign of the Times cards could inspire a collector to buy them simply by their design. These Masked Men cards could do the same thing. When I pulled the first Masked Men card out of the pack I couldn't believe a card could look the way these do. Everything about these cards are first rate. From the foil to the artwork. HUGE kudos go out to ITG for these cards. These are the gems of this product. These cards get a 'ten' all by themselves! Unfortunately, the overall score drops because the other cards can't hold a candle to these.

Overall Rating -
Between the Pipes is a fun product to open. As a collector that is not really into goalies, I was still able to enjoy opening up a box and seeing all the cool stuff found inside. For me, it'll be one box and done. For collectors that do like goalies though, I think BtP is a very solid purchase. There is a nice mix of game-used cards and autographs. As usual ITG has included short print cards and amazing patch pieces to find. You can only get these by buying quantity of this product, as evidenced by my single box purchase.

The star of the break in my mind is the Masked Men 5 set. The cards in that set are gorgeous. I'm not sure if it's just the beginning hype that I'm feeling at the moment... but I seriously want to get the entire set of these cards. Their beauty cannot be denied.

At about $100 per box of BtP, it falls squarely in the mid-ranged priced products. There can certainly be value found in BtP. I'd recommend busting one box for everyone, and if you like goalies... bust one then keep on going and having fun with it!