A lot of people who watch my videos and keep up with my card collection know me as THE Logan Couture collector. When I got back into collecting cards in 2009, I didn't just want to buy packs and boxes and hope for the best. I had done that as a kid and teenager... and it left me in the end with a lackluster collection and a feeling of unfulfillment. So as I started collecting anew I decided to focus my collection on only two specific things - a team (the Sharks) and a player (Logan Couture). Today I'm going to be talking about the good and the bad of collecting a single player and having a player PC. 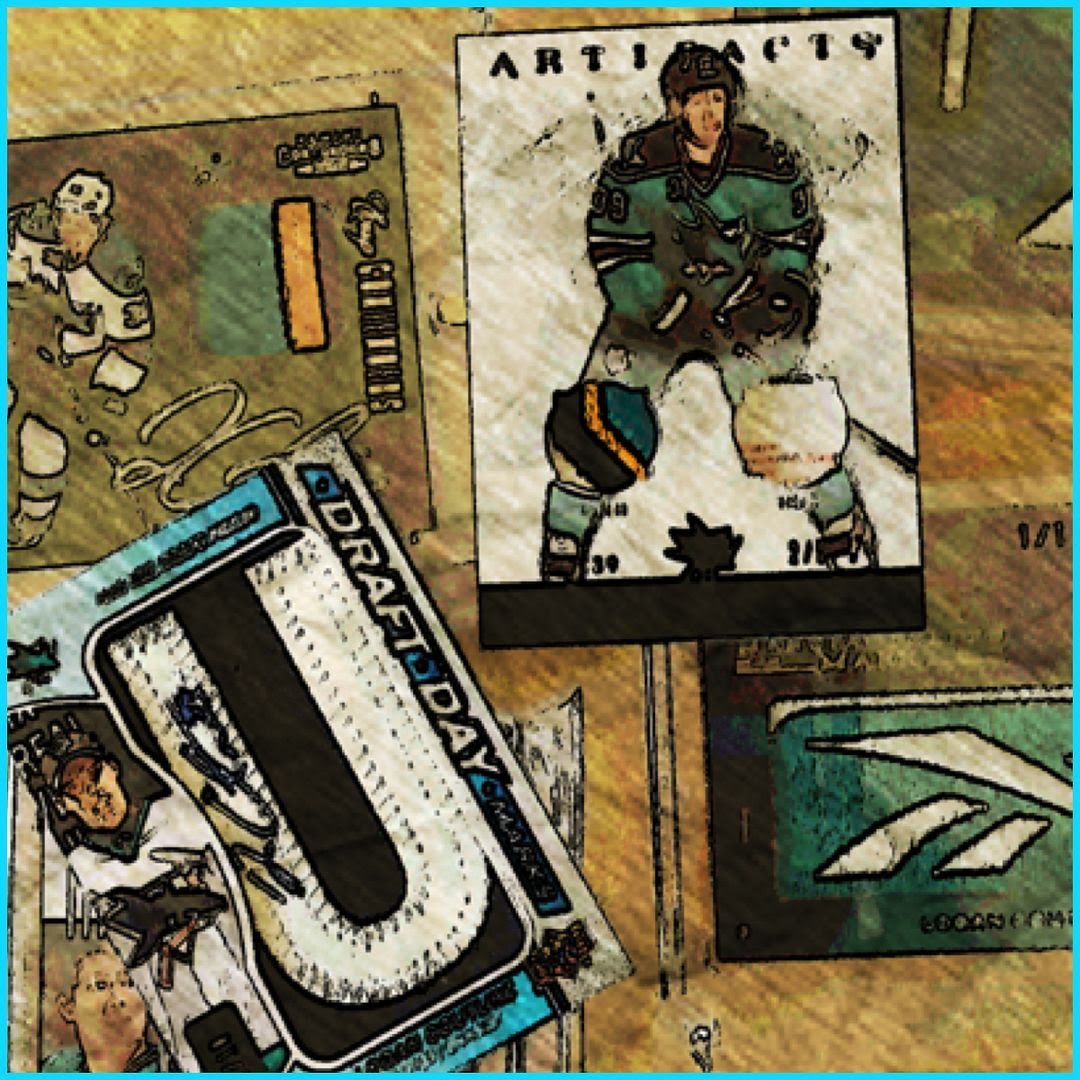 I'll start with the good of collecting a player. There are lots of good points, actually. I mentioned that collecting a player brings focus to a collection - and that's a really exciting thing. I think sometimes collectors just buy and buy and buy... then they trade or sell... and then do it all over again. There is a never-ending rotation of cards that come in and out. While that may be fine (and fun, to an extent), I, personally, am not a fan of it. When does it end? After a while, this cycle can get tiring or boring. However, the feeling of building something up, and taking pride in amassing something unique is really appealing to me - and that's what focusing the collection on a single player can do. Focusing your collection will create an identity for it. With that comes wanting to make the collection bigger, better, and more complete. There is definitely a huge amount of pride that comes from putting together a player PC. Not only have I had a ton of fun from building it up, but others who have seen it have enjoyed it too.

When collecting only certain players, you can tend to get really focused on how that player does. I know that when I watch Sharks games, I'm keeping my eyes especially on Logan Couture and how he plays. Luckily for me, he has been consistently one of the best Sharks these past few years. I find myself rooting for him and checking out his stats after games. I'm also reading his tweets on Twitter and trying to find out all about him. I have to count myself lucky for choosing Couture though... that choice turned out to be really good on my part. See, when I began collecting again, I just randomly picked Couture to collect because he was a rookie that year on the team that I followed. And that was it. I had no idea he'd turn out to be such a special player. So with that, I got really lucky. I was fortunate enough to pick up many of his cards earlier on before they took a dramatic jump up the year after. And therein is another benefit... if you start collecting a single player early enough and they blossom into a star in the NHL, the collection of cards you have of them could have a significant rise in value.

For the high roller-big money collectors out there, PC-ing Sidney Crosby, Wayne Gretzky, or Patrick Roy can be great fun and a great financial challenge to take on - and they will pretty much hold their values well. But for lower or mid-range collectors like myself, finding those players you like that may not be superstars is a great way to go if you're on a budget. This is especially true if the player you find yourself gravitating towards is a minor star or local favorite. It really depends on your budget, but thankfully, there are great players to collect for every budget out there.

There are definitely negatives to player collecting that must be considered though too. For players that are perennial role players or 3/4th liners, finding cards of these players can be few and far between after their rookie years. Part of the fun of collecting a player is looking forward to all the new releases that come out each new season. Those lower-level players usually are regulated to sets like O-Pee-Chee and Score, and maybe Upper Deck Series 1 or 2. The cards are definitely more affordable, but the cards won't be as exciting. Often those sets will not have autographed or memorabilia cards of your player. But there might be some rare parallel cards to chase down for a little challenge.

On the opposite end of the spectrum, the player you begin could become very hot. That's great... but not if you can't keep up with the rising demand and prices. Collecting only one player is great, and it's pretty easy to get cards of that player numbered to 20 or more... but once you start going for those really low serial numbered cards... that's when it really hits you in the wallet. One-of-ones are always a large financial investment. #creditcardFTW

Speaking of which, what can be very bad is bidding for those rare cards on eBay against a team collector or fellow player collector. There is definitely the potential to overpay for a card you want to put in your PC. I know because I've done it many-a-time. Those situations really suck. And that's when it pays off to really know who in the card community is concurrently collecting what you are collecting. When you do that, you can form alliances or help each other keep the bidding wars down to a minimum.

And that leads me to how to collect a player. It's definitely not by buying packs and boxes. I love cracking wax as much as the next guy, but I know I will never get the best cards of my player by doing so. There are a few resources that you constantly have to utilize when seeking out players for your PC.

- eBay: Use the eBay search to look for your player. I do this all the time SEVERAL TIMES A DAY... haha... or even several times per hour even! You never know what that great 'Buy it Now' or 'Best Offer' will show up for the taking. Try commonly misspellings of your player to get better deals. One example of this is Ryane Clowe. I always find stuff under 'Ryan Clowe or Ryane Clow'. These mistakes by sellers can be your gain.

- Join a Card Forum: There are several great card forums on the internet for people to trade and find cards they want. Three that immediately come to mind are Sports Card Forum, CnC, and Hobby Insider. There is a wealth of resources on each of these sites. When you see boxes broken and shown off... there are opportunities to PM users to buy or sell. Dedicated trade pages also are also offered for collectors to find what they are looking for. Beckett also is a nice site to check out especially for the major American sports.

- Youtube: Youtube may be a strange place to recommend for sports cards, but a lot of collectors share their box breaks and trade videos through Youtube. It's also a great way to show off your collection and let people know who you're looking for. I can say personally that most people know I collect Couture through Youtube. I have had people PM through the Youtube site telling me where I could find various Couture cards or that they had one that I might need.

If you have some insight on player collecting I'd love to hear from you. I'm sure there are many more positives and negatives about it. Please let me know in the comments below what you think!
Posted by luke. at 3:51 PM