Leaf jumps into the hockey card world with their Best of Hockey release. Leaf has already had strong 'Best of' product releases in baseball, football, and basketball. With these already proven successes, it'll be interesting to see how they fare with the hockey crowd, a group that can often react differently than expected! Let's take a look a box of Leaf's Best of Hockey and see what it brings. Each box only comes with 2 cards so this review will have a slightly altered format than my usual ones. 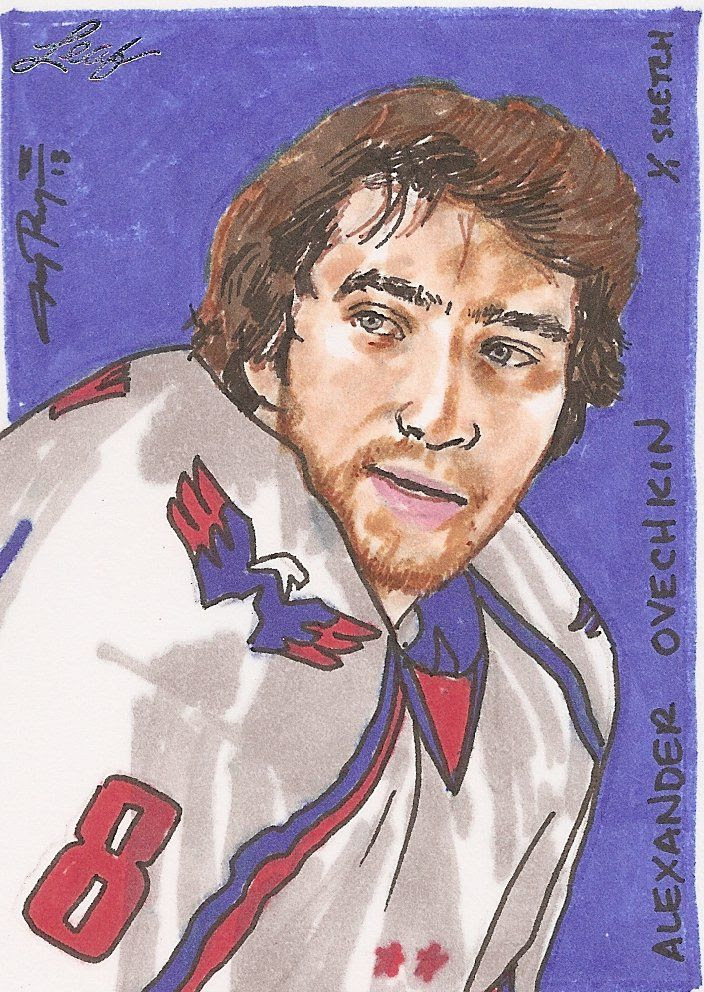 Art Sketch Card -
The first card that you will see when opening up a Best of Hockey box is the original art sketch card. Each card is individually numbered 1 of 1. Though there may be similar pictures of players, no two cards can be exactly alike. The Alexander Ovechkin sketch I received was very nice. The full-color illustration looks great in person. I honestly didn't think I'd like it as much as I did seeing it up close in my hands. Watching video breaks do not do these cards any justice. I do, however, count myself lucky in pulling a full-color sketch. I have seen others that are done only in mono-tone black-white-and-grays. In non-sport card releases that feature sketch cards, full-color cards often carry a premium (sometimes a significant one). This could be the case with these cards - I would think the better looking the sketch, the higher it would fetch on the open market. Each sketch card simply comes in a top loader... no huge slab like ITG's History of Hockey. I find myself preferring Leaf's more humble approach to these cards. It makes me feel as though ITG was 'puffing up' their cards, whereas Leaf was just giving you a neat sketch card along with the buy-back card in the box. And it has to be mentioned that most of ITG's slabbed art cards were not 1 of 1 sketches... though they all did feature memorabilia pieces. 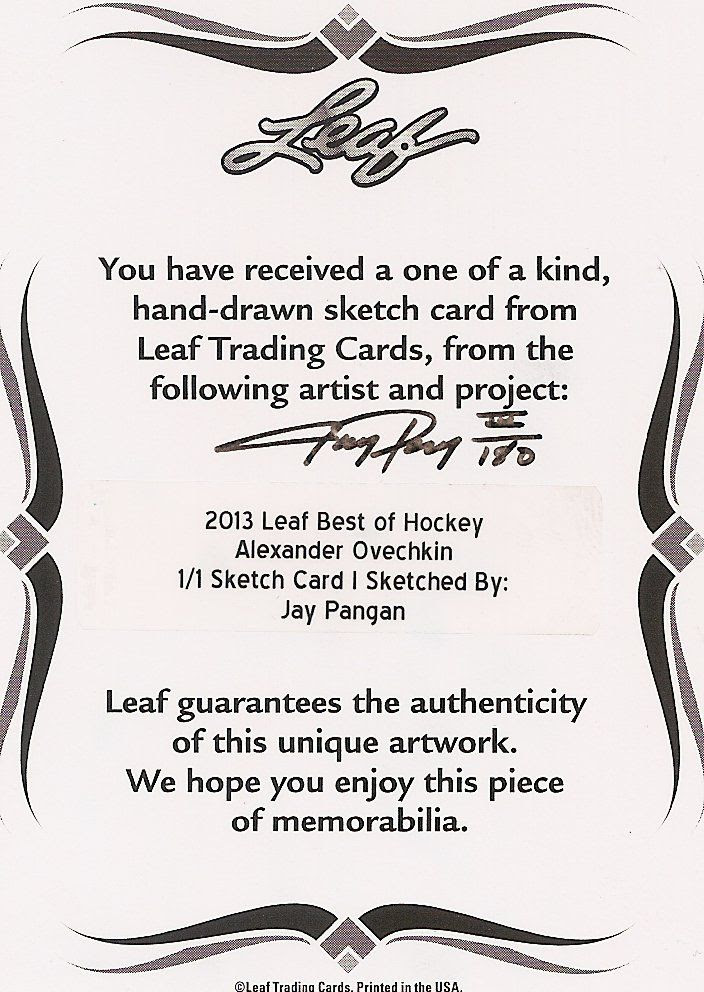 The reverse of the art sketch card has a sticker indicating that the card is indeed a one of a kind collectible as well as the artist's name and autograph. It's a simple design, but perfectly appropriate for an art card. It's simple and understated.

Besides just looking for more colored or less colored sketch cards, Leaf has also given a chance for collectors to find autographed Gordie Howe sketch cards. These rare cards would make a great centerpiece of a collection... or net a nice chunk of change!

Buy Backs -
The 'main event' when opening up Best of Hockey is the buy back card. The people over at Leaf have re-purchased a score of hockey cards to be inserted into this product. Since the name of the product is 'Best of Hockey', one can only assume that good cards will be found within. Here is where Best of Hockey and ITG's History of Hockey split paths. ITG's History of Hockey was all about celebrating all the players (apparently the good and the bad) throughout hockey's history. It had a strong historical focus... and centered on the people who played the game. Best of Hockey, on the other hand, is all about the cards. It's about cards that are rare, have amazing memorabilia pieces, autographs, high grades... and most importantly, I guess, a high value. With a price of over $200 per box/pack, it better deliver. And it can... there are certainly some very sweet pulls to be found in Best of Hockey, but as in all things card related, it's a huge gamble. I'm pretty sure you won't pull a $10 card of out this Leaf product (you may in ITG's History of Hockey... heck... even $1 cards...), but chances are you will get a card you could probably find for less than a box if you were to look on eBay or at a card show - unless you hit one of the real biggies that were inserted - like a 9.5 Gretzky rookie. 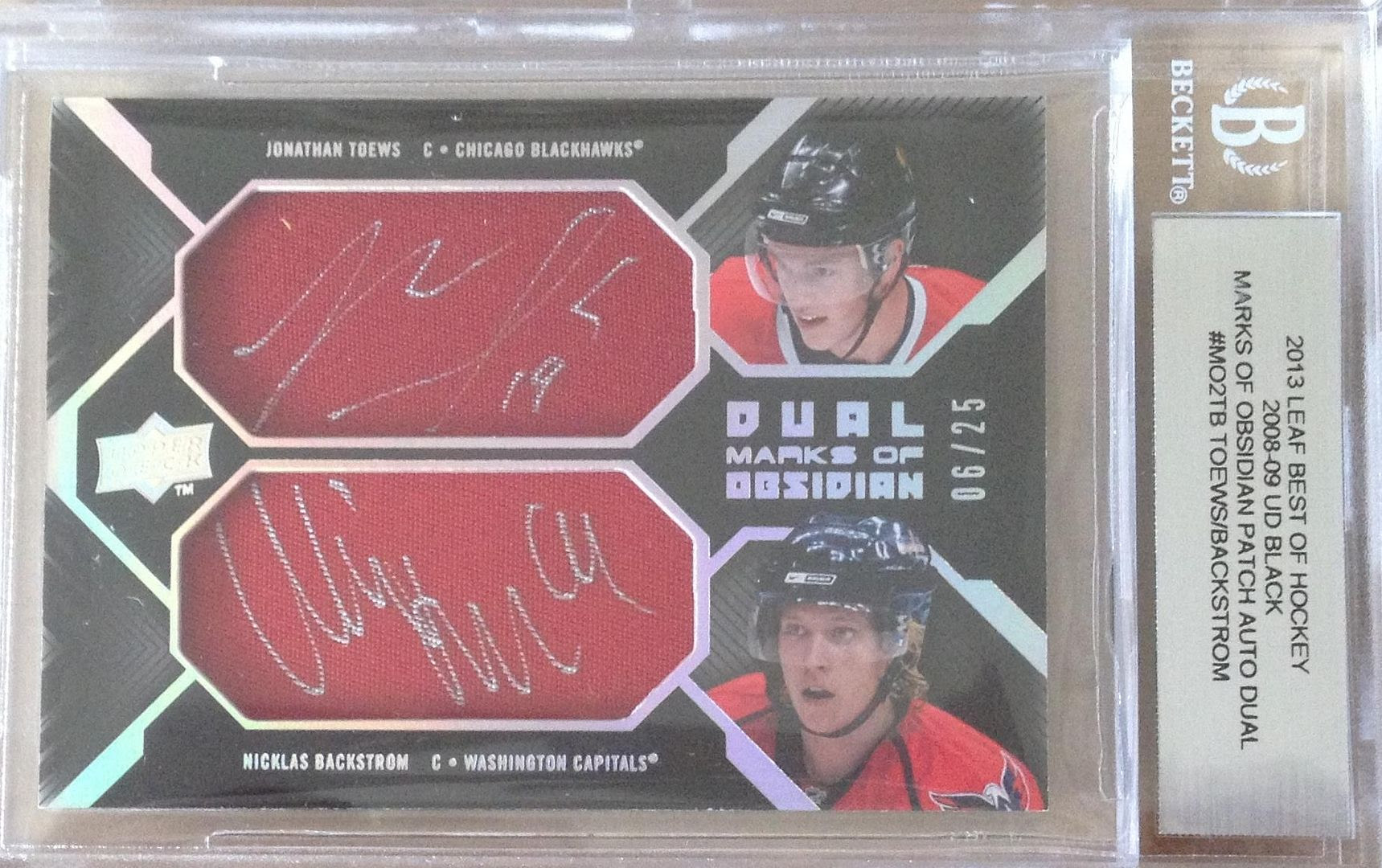 The card I pulled in my box was this dual auto/game-used card from Upper Deck Black. It's not particularly low-numbered, but it is a good card - not a $150 or $200 card - but a nice nice card nonetheless. Most Best of Hockey cards I have seen have been slabbed and graded. It was very surprising to me to see this card come out without a grade on it, but with a Best of Hockey label. I'm not fond of the label, I'd rather it have it out of the slab... but these things are pretty difficult to remove. I wonder how many cards have this label on it. I don't think Leaf is trying to create a Best of Hockey set like ITG kind of did with History of Hockey... so having the label is just a little weird. To me, Best of Hockey is a product that allows collectors to get sweet cards from other releases... with that being it. No set ambitions for itself as a product - purely re-sell and re-pull-ability. So I'm not going to worry about the label too much as I don't see too much significance to it. Hopefully collectors won't be confused by it.

Besides being able to get single cards, Leaf has also inserted redemptions for tins of the Cup and even packs of 1978 cards with the (extremely difficult) chance of getting a Gretzky rookie. Pretty neat I think! Wouldn't it be awesome to buy a pack of this and get a tin of the Cup? I'd be pretty happy as the price of a Cup tin is definitely greater than the Best of Hockey price.

Overall Value -
You'll hear this said by pretty much everyone - Best of Hockey is a high risk, high reward product. And that's totally fair to say. It is a really fun break though, and I've already seen many people excitedly breaking this product. To me, this product is card collector candy. Leaf has attempted to find THE BEST cards to put in this product. Though some of the cards may not be up to everyone's expectations, it's hard to say this product has any real dud cards inserted. For collectors like myself, who like to take the occasional gamble, this is a pretty nice product to get into. With all the assortment of great cards put into it, opening up a box will always give that rush we crave as card collectors. Leaf has done a very nice job of creating a hockey version of their 'Best of' cards. I'm hoping there is another iteration in the future as this one was supposed to be an extremely limited release.