As with always, sorry for the late review of this ITG product. It's hard to get in ITG products right when they come out for me! But anyways, it's great to finally be opening up some new product. With this lock-out shortened season, hockey card products are few and far between. Though I do love the fact that there is something new to open... as a huge Sharks fan... this Winged Wheel themed product has me a bit skeptical. How do I like a product with all Red Wings in it?!? 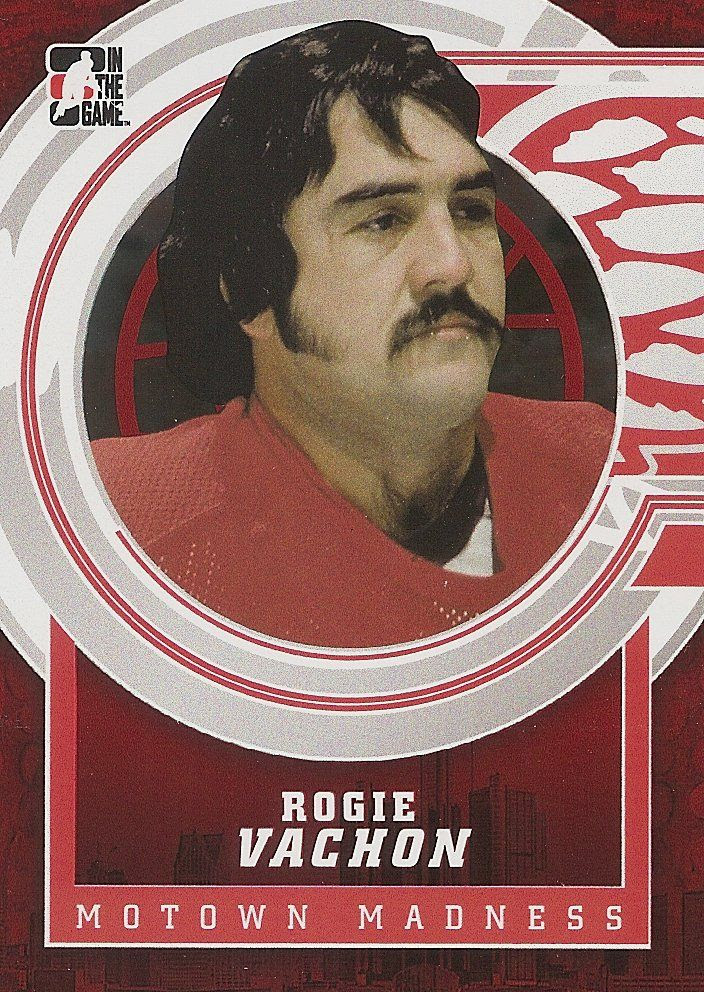 Base Card Design -
The base cards in Motown Madness have been expertly done. ITG has done very well given the fact that they don't carry an NHL license. The colors and graphics are spot on for a Detroit Red Wings themed set. Each card features a large close-up photograph of the player within the Red Wing logo design. That design element is genius - I'm guessing it was different enough from the actual logo that they could use it. Also shown on card is the skyline of Detroit itself acting as a background to the player's name and the Motown Madness logo. Having the city there was spot on, but it is a bit too hidden for my tastes. I would have liked the image of the Detroit skyline zoomed in a bit more, or done in silver to make it stand out. Though I love the red foil covering the card, it does make the city less pronounced. Overall though, these base cards are soem of ITG's most impressive yet. 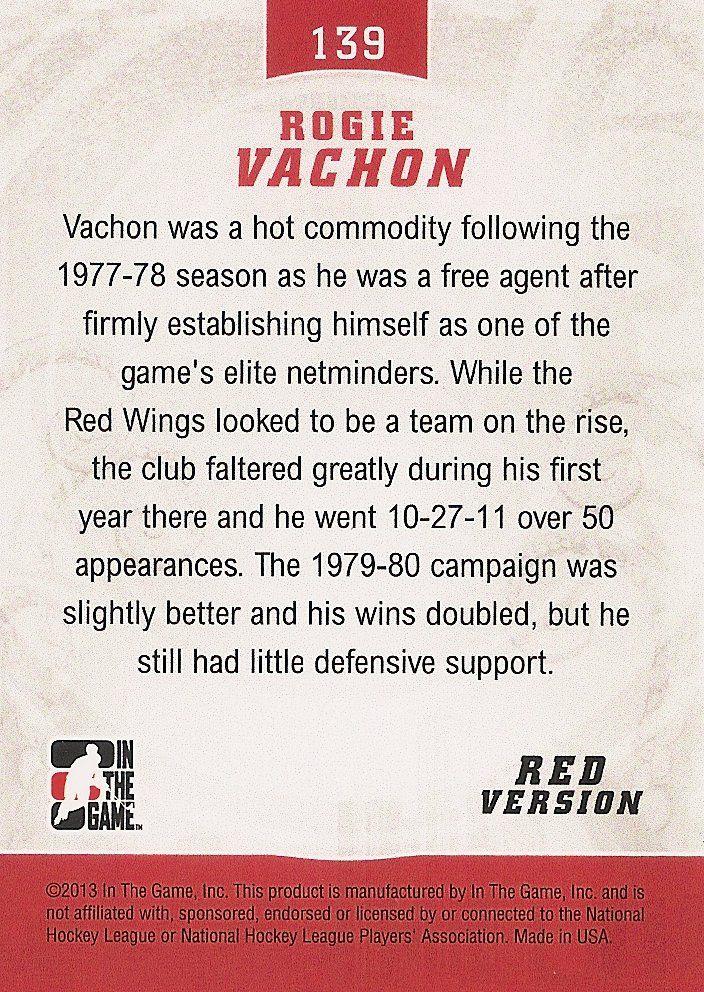 The reverse of the card is mostly standard ITG fare. As usual, there is an informative write-up on the featured player. A write-up in this case is the perfect way to go so as to focus the information solely on the time when the player played for Detroit. I especially enjoyed reading about players I usually associate with other teams, such as Rogie Vachon (above) and Adam Oates. It was enlightening to learn something about these players from a Red Wing point of view. As for design, the back is pretty spartan. There is a light backing on the card that I think is there to add a textural element... but I would have preferred a straight stark white backing with the minimalist red trimmings. To me that would have screamed Red Wings.

Inserts/Game-Used/Autos -
Every 12 card pack/box of Motown Madness comes with 2 game-used memorabilia cards, 4 autographs, and 1 patch of honor card along with the base. ITG has done away with any other non-hit insert cards with this product - great choice in my opinion! 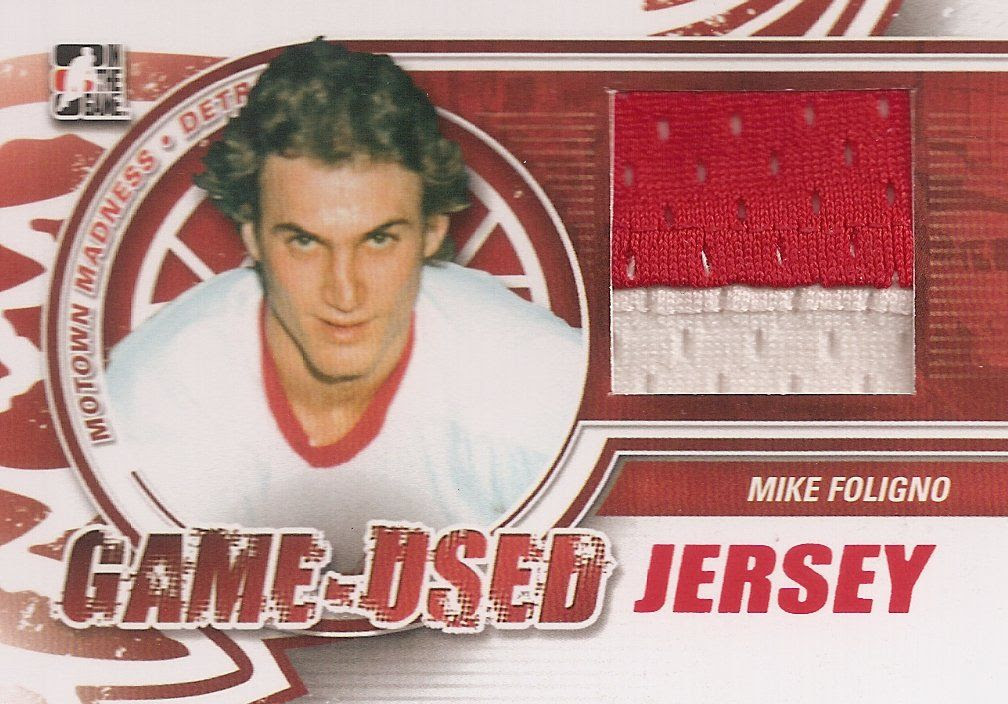 This Game-Used Jersey card of Mike Foligno features a design that is instantly recognizable as ITG. Often times I enjoy continuity within brands and companies, but in this case I wish ITG would branch out a bit more. There is nothing wrong with the design of the card, but it just feels too similar to everything else ITG. Remove the red Motown Madness 'skin', and you have your standard ITG jersey card. Thought the card design might feel repetitive, getting jersey pieces like this never gets old. The jersey piece in this card features a huge seam that billows out of the jersey space. When I first saw the card I thought I had gotten a patch piece. Got to give props to ITG for their selection of jersey swatches. 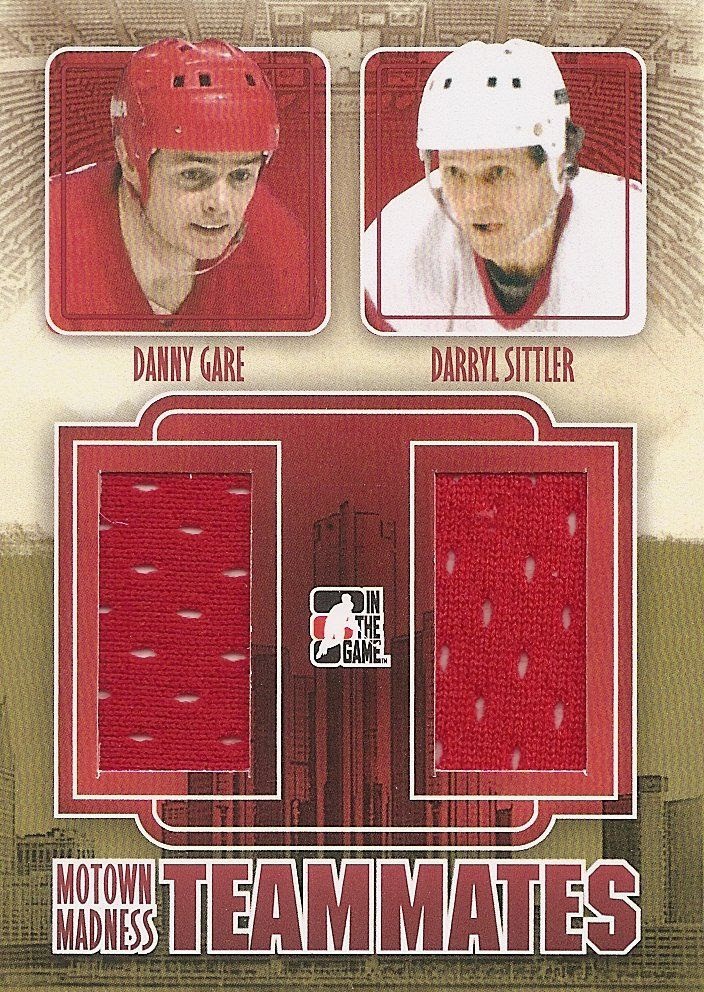 My other game-used card was a dual jersey card of Danny Gare and Darryl Sittler. I like the idea of putting two players who played together from a specific period of time together, but in this case, I don't know who, other than hardcore Detroit fans, would want this card. Besides the lack of star appeal of the players, the design here is purely functional. There isn't anything artistic or eye-catching that makes this card stand out. There are some cards that look so good in terms of design that it literally makes collectors want to go out and buy them just because they look so cool. This is not one of those cards. 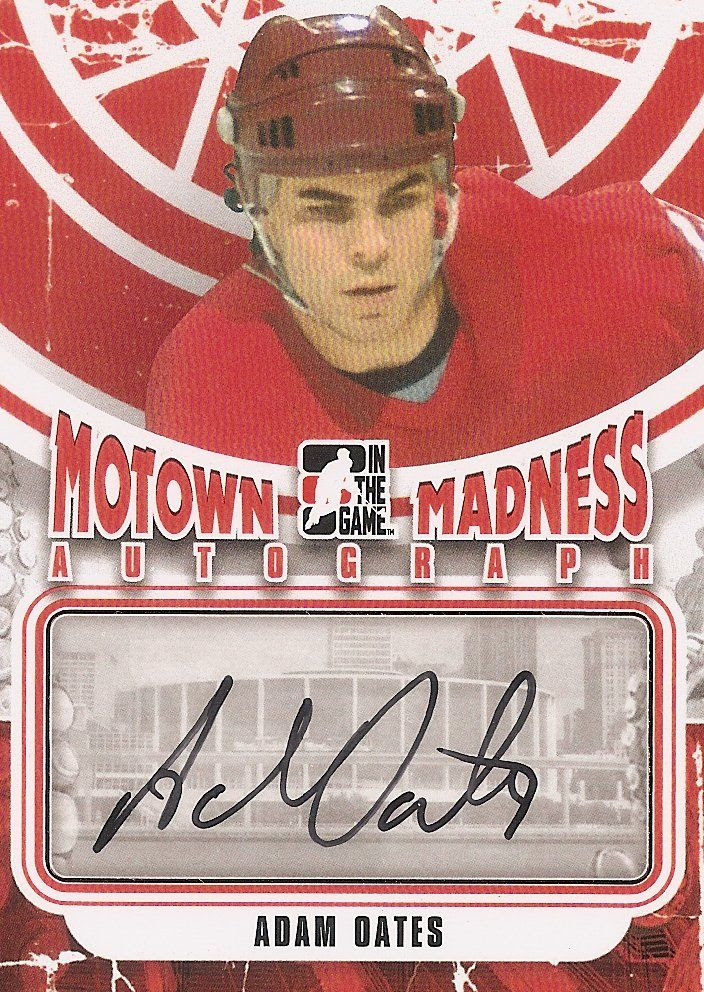 Thankfully, the autographed cards in Motown Madness are a bit better. Alone, they look 'ok', but when placed together - like in binder pages - the Red Wing theme really comes alive. Collecting them all is a huge challenge (there are some very short printed cards and the set is very large), but something that would be worthwhile to hardcore Wings fans. 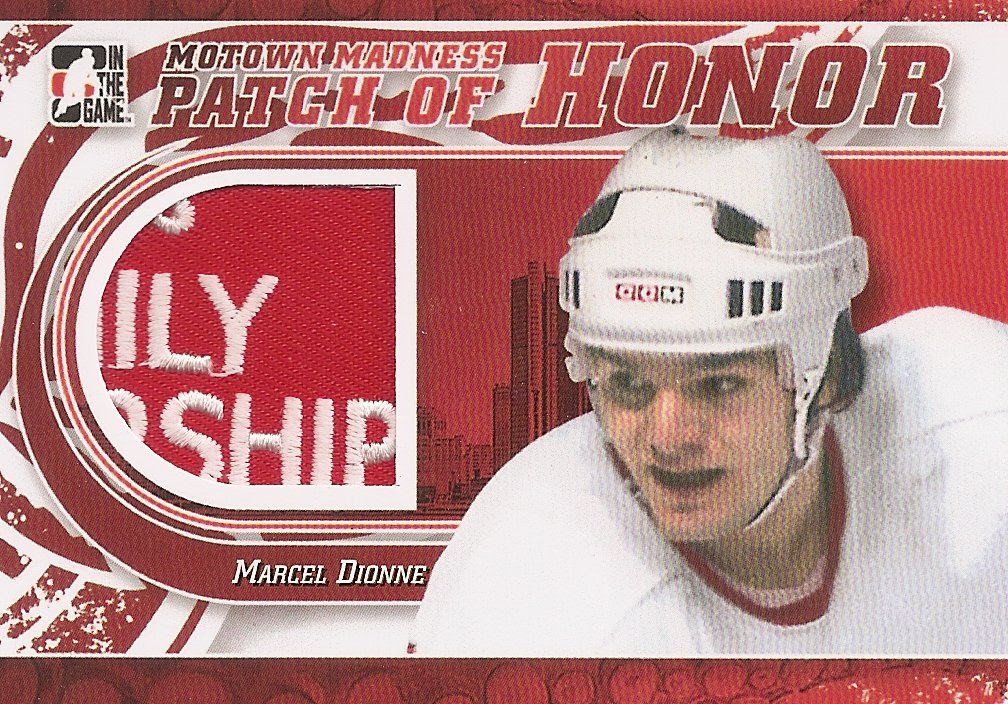 Lastly, I would like to mention the Patch of Honor cards. These patch cards look great... they are unique and have a bunch of breaks or lettering... the only problem here is that they are manufactured patch pieces. They are replicas of real patches. I, for one, am not a fan of these cards despite how cool some of them look. ITG is known for their real game-used cards. Mixing in these manufactured replicas lowers the bar a bit. I will let you come to your own conclusions about them, but to me they are a miss.

Though I didn't get any, Motown Madness does have some pretty spectacular game-used and autographed cards. A wealth of Winged Wheel history is contained within these boxes!

Overall Value -
Obviously, for a Red Wings fan, this is THE product to get... and get a lot of. It was tailor made for you. The history embedded within Motown Madness is crazy! The autographed set would be especially tempting if the Wings were my team. What an amazing opportunity to get autographs of players with specifically designed team-themed cards. I'd be in card heaven with these. And besides that, the base cards in the set are great themselves as well. I think using them for autographs with a silver Sharpie pen would be off the charts.

For me as a Sharks fan... this is a product just to try and be done with. I was hoping to pull something nice... maybe a Howe or an Yzerman... that would have been awesome... but this box pretty much was a strike out - I'm not sure there are many boxes worse than this one (I certainly hope not!).

Hockey fans are crazy about their teams, so I find it hard to imagine anyone other than Wings fans busting this stuff too extensively. It's the same feeling I got when opening the Flyers themed Broad Street Boys, and to a lesser extent, Forever Rivals (featuring Toronto and Montreal). Maybe one day ITG will do a Sharks themed set (in my dreams)... I'd be all over it!

So for Red Wings fans... this is for you. I'll go ahead and rate it a 10 for you. As for everyone else, the score gets lowered. The product has its ups, but as seen by this box, there are cards in it that could be quite uninteresting and undesired to the non-Wings fan.

Check out my box of ITG Motown Madness!