After breaking a fair amount of 08/09 Be a Player blasters, I thought it would be fun to go back a year and try my hand at some 07/08. Be a Player is almost always a quick and fun break. It's great to know that an autograph card will come out of the box. I wonder who's autograph I'll pull out of my blaster today! 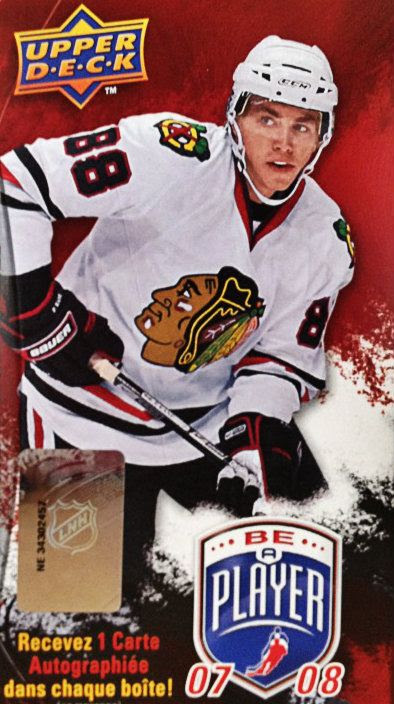 Upper Deck Be a Player blasters have always come in the same format - 2 packs per box with one pack containing an autograph. Very simple, very concentrated. The autograph is what you really buy this box for. Though there are base cards in the box, most collectors don't pay too much attention to them. They might be enjoyed by younger or newer collectors, but I don't know too many collectors who go for Be a Player base sets or individual cards. They might look for their PC player or team... but other than that, the base cards here are not sought after in any significant way.

That being said, there is an off chance that an insert or rookie card might be found in the blaster. As they are pretty difficult pulls, those cards would be a fun little gem to uncover when breaking these boxes. I wouldn't count on finding one though... in all the blaster boxes of BAP that I have opened so far, I have only come across one rookie/insert card amongst the standard base cards.

Let's take a look at what inside this blaster of 07/08 Be a Player:


Review -
Opening up Be a Player takes no time at all as there are only two packs per blaster. But before I talk about the break, I would like to mention that Upper Deck made an interesting design choice with the blaster box. The left side of the box has been indented to create a unique design element to the packaging. I really think it makes these blasters stand out in a special way. I mean, you just don't expect to see effort in designing blaster box packaging. I've not seen anything like this from Upper Deck since. It's definitely not a huge thing, but it was something I found interesting about this product.

As for the break, this had to have been one of the worst breaks in terms of content. My first pack yielded no players that I would consider an NHL star. The biggest names was Nathan Horton... yep... Nathan Horton. At least in my previous BAP experiences, I was able to pull Crosby and Ovechkin - not this time!

The second pack, which contained the autograph, was only slightly better. It did have a big name NHL star... but the autograph card was of someone that I had never heard of before. Sigh... it would have been nice to at least get someone who's name you recognize. But that's how it is! Better luck next time I guess!

Here are the top three cards from this blaster (maybe the saddest top three ever!): 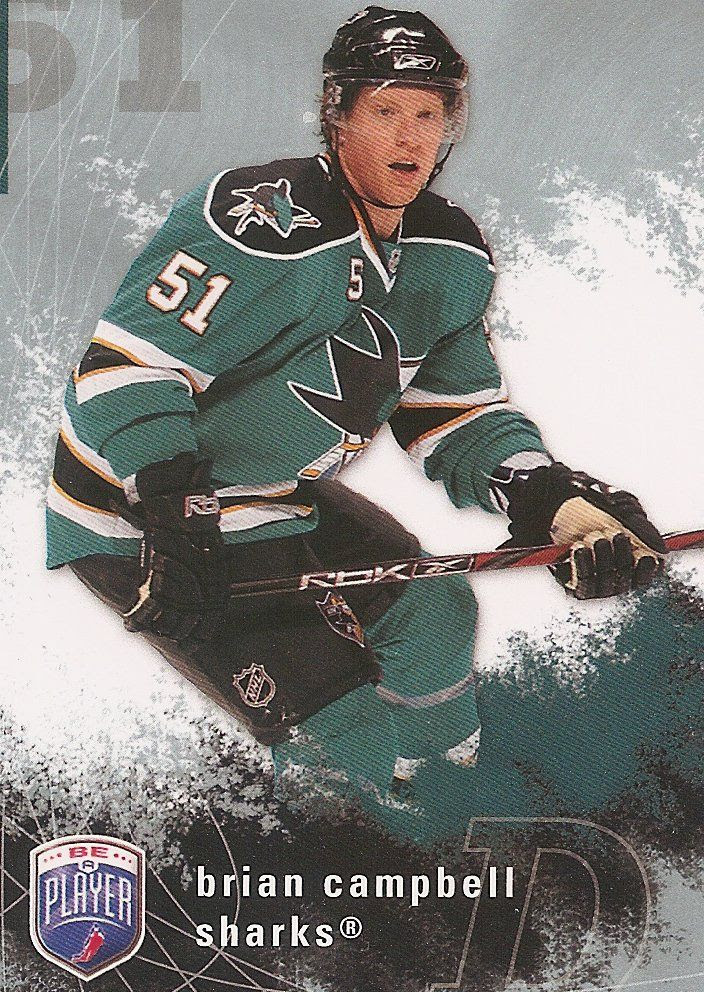 #3 - Brian Campbell Card No. 166
Campbell gets the third spot in this break only because of the jersey he is wearing in the picture - gotta support the team! Anytime I can pull Sharks out of any product it's always a nice thing. And actually, looking at the base cards... they are pretty nice looking. I actually like that the designer chose to go with all lower caps for the player and team name. A very cool thing to do! 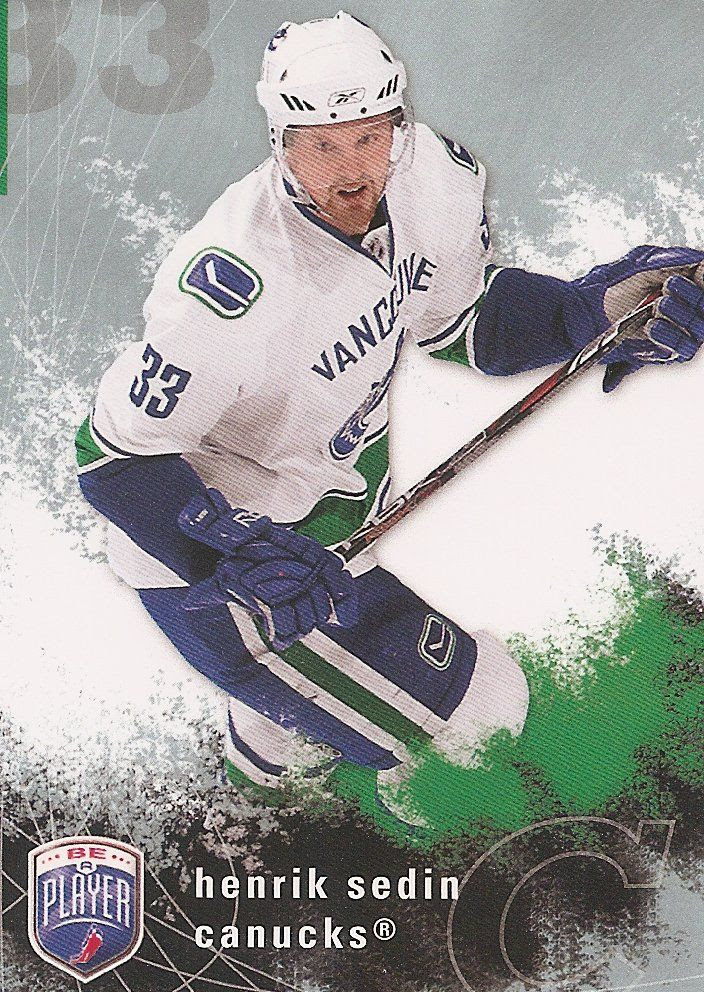 #2 - Henrik Sedin Card No. 194
I can't believe it! Another week and another Canuck in the top three! But gotta play the cards that are dealt, and Henrik was the best player overall that I pulled in my two packs. 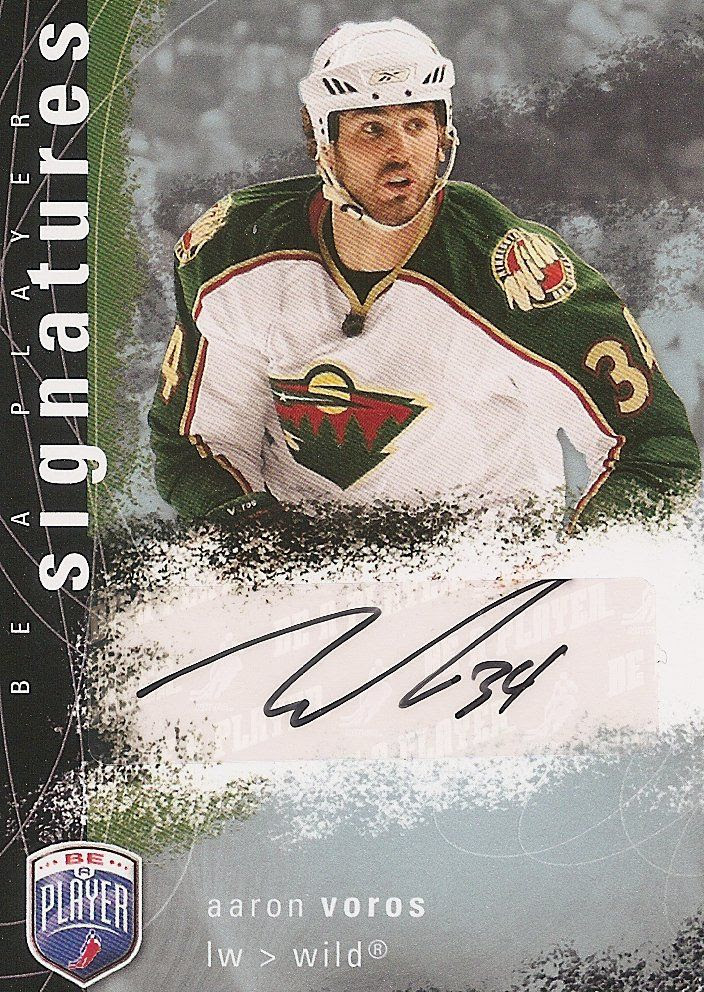 #1 - Aaron Voros Card No. S-AV
Sadly, Aaron Voros is the number one pull from this blaster - and solely for the fact that it was the autograph I pulled. I wonder if Aaron Voros has made any other top card lists... I'm guessing probably not! I can't say I'm too excited about getting this card. If you're a huge Aaron Voros fan... let me know! I'm sure we could work out a trade!

Overall Value -
This particular blaster box of BAP was very disappointing. I know that not all the blasters are like this... and at about $10 a box, it's still a good deal. I guess it's good to have a box like this on occasion though, it's a reminder that this hobby can be very good... and very bad too! Let's see what next week's blaster brings us. This one is like a bad game that just needs to be forgotten!

Let me know what you thought of my 07/08 Be a player blaster down in the comments below. Have you ever gotten anything good from a bunch of loose retail packs? I'd love to know!

Look for a new episode of Retail Review every Sunday!
Posted by luke. at 6:37 AM