Limited... what an appropriate name for a card brand, as there will certainly be only a limited amount of products for hockey collectors to buy this season! Hopefully though, with less product will be better concentrations of value. Panini's Limited brand of cards has always given collectors a very concentrated amount of cards for its price point. Let's see what kind of value it yields as I rip into a box! 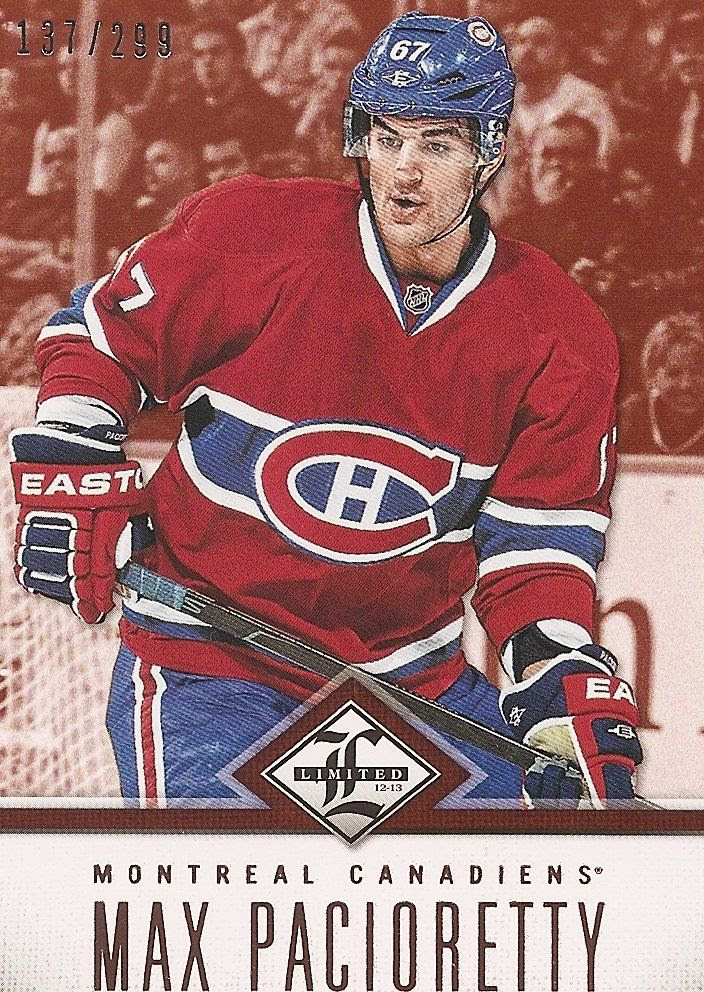 Base Card Design -
I have to say that I appreciate Panini's approach to Limited Hockey. It has a very different feel to it compared with their basketball and football Limited releases. With the other sports, there is a focus on foil and shine in the base set. Here with hockey, the base cards are more subtle... they are more refined and understated. The cards are sweet and mature. Panini has gone away from the paper thin foil card stock and have instead gone with a thicker base card. The image of the player on the front of the card has an art effect on it that makes each card look as if it were drawn rather than shot with a camera. This effect softens up the card in a way that really makes these base cards look classy. Furthermore, the subtle foil accents and minimalist graphic design of the card only increase the amount of class these cards have. There are no gimmicks here, just clean, beautiful cards that look and feel premium. Like every card in the product, these feature serial numbering. Standard base cards are limited to only 299 copies. 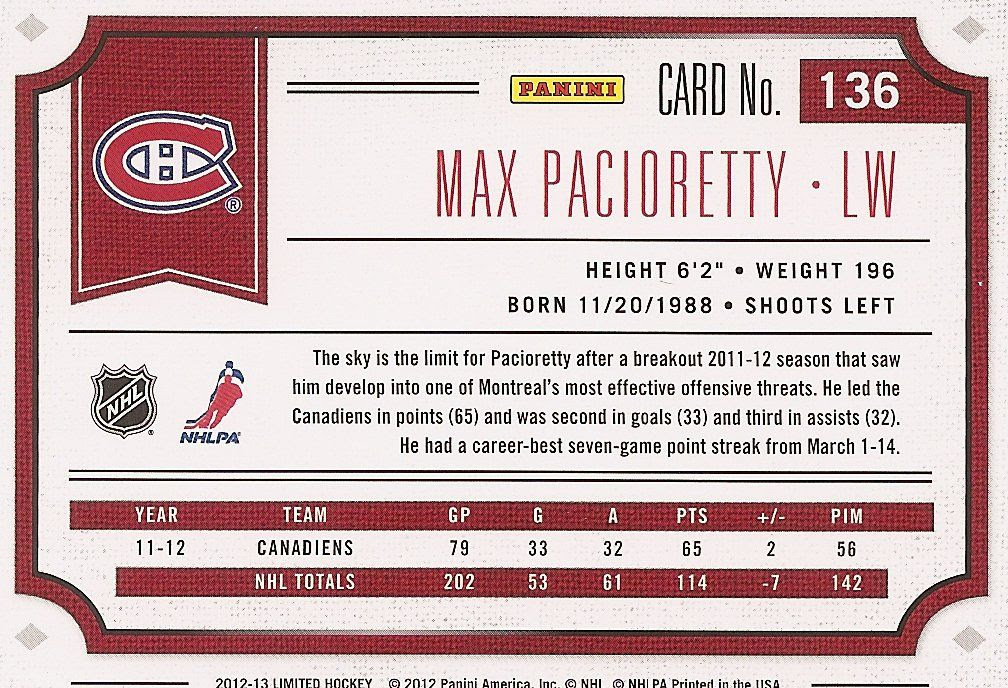 The back of the Limited cards have a horizontal orientation - certainly an interesting choice given that the cards are vertical on the front. It works though, and works well. Just like the front, everything about the back screams clean and classy. There isn't any wasted space, and though there is not player image, the back looks good enough that it doesn't need one. The little banner with the team logo is a great little design element, as is the frame that borders all the pertinent information about the player. There is only enough room for one line of statistics, but this is pretty much the standard for higher-end cards. 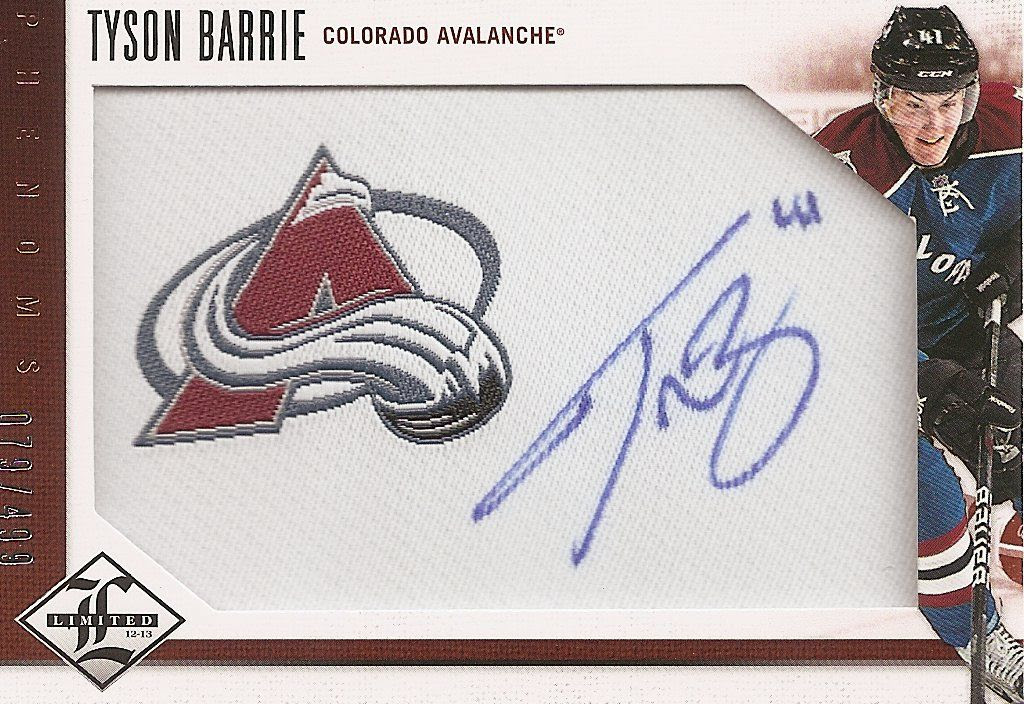 As usual, the manufactured patch rookie cards are again part of the Limited base set. These cards have always gotten a mixed reception with collectors. I, for one, am not a huge fan of any manufactured pieces except for country flags. So I'm in the camp of collectors that would prefer Panini to change it up with their Phenoms rookie cards. The box that I opened at D&P Sports Cards was a redemption, but if you have seen the Phenom manufactured patch cards, they look very similar in nature to ones produced in other years. The athletes sign a white piece of cloth with some sort of manufactured logo on it. These aren't terrible cards by any means, but I think collectors are ready for a move in a different direction. With Limited being a higher-end card release, I am sure that collectors expect (want) to have some sort of player-worn material for their rookie card pulls over these.

Inserts/Game-Used/Autos -
The great thing about Limited is that collectors can tell a lot of thought went into creating the cards in the product. There are a myriad of different inserts, game-used, and autographed cards to find in boxes of Limited. 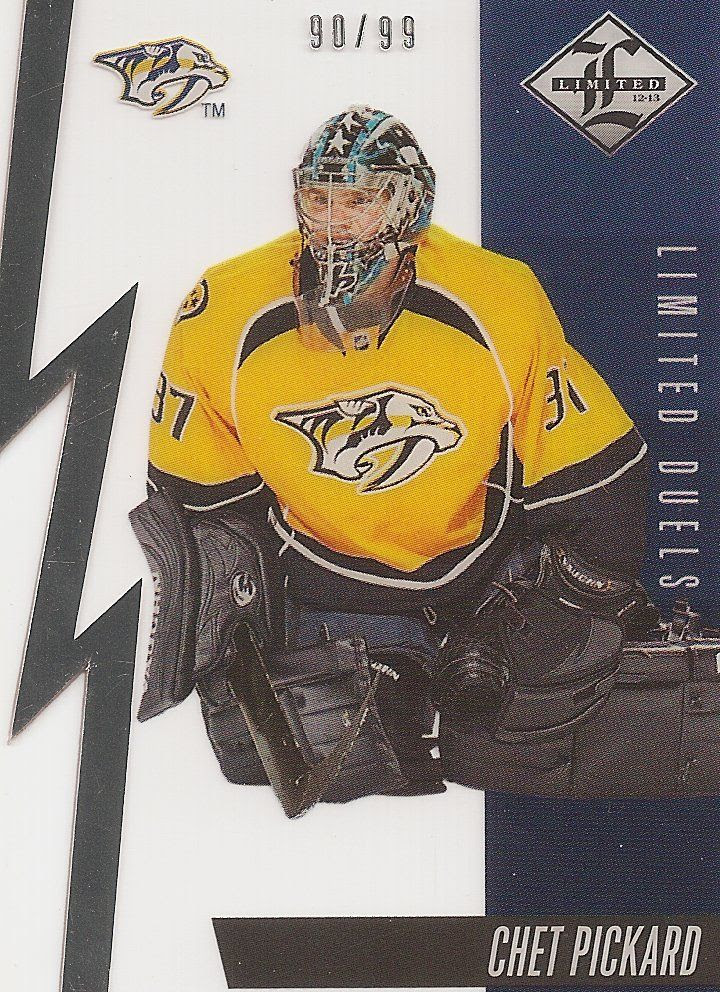 Shown here is one of those cards that has definitely been given much thought into creating - a Limited Duels acetate insert card. This insert card has a lot going for it - it's made of a special material (AND has foil), has serial numbering, and can be combined with another card to create a larger one. When I think about how insert cards should be, this is what I think the standard is. It's great that the Limited inserts have been designed creatively. Insert cards have definitely fallen in terms of quality since their heyday in the 90's, but that doesn't mean companies should just put out lame, stale 'throw away' cards. It's awesome that there are inserts like these that cause collectors to stop and think: 'Wow, this is a neat card that I have here!' Really great job by Panini with these. Collectors can find these and other smartly crafted acetate cards in Limited this year. 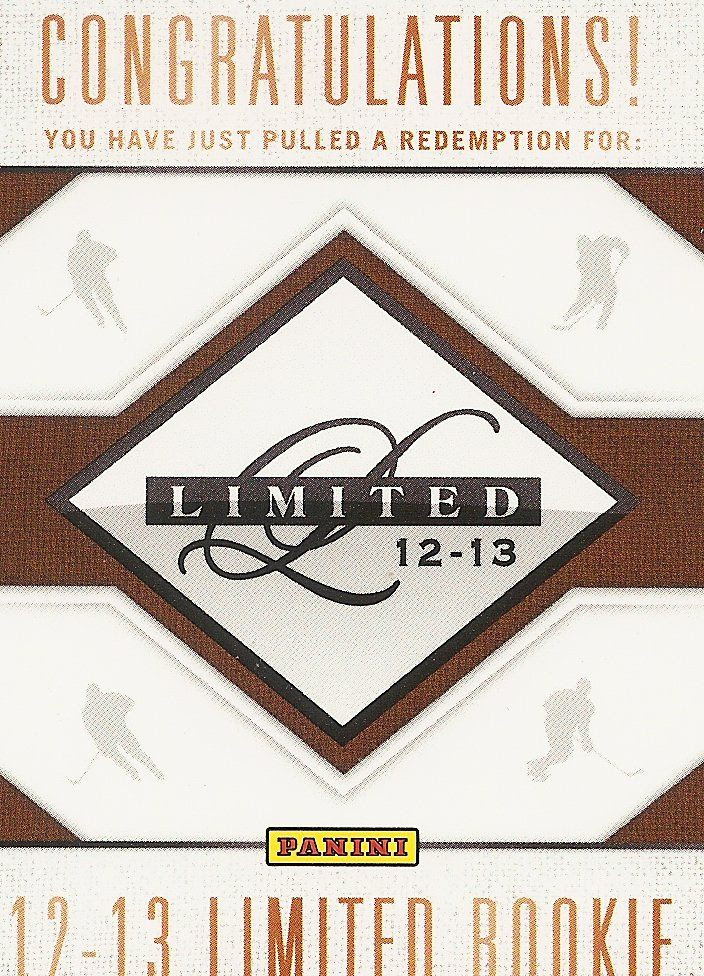 Because of the NHL lockout, the powers that be decided that there will be no rookie cards of new players this year - only holdovers from the last season. That's a real bummer for collectors, but to alleviate the bad situation a little, Panini has inserted redemption cards for new players that are skating for the first time this year. These cards will be released (most likely) after the season, and give collectors a chance at having a nice card waiting for them later. Panini did this last year when the NBA's lockout derailed the basketball rookie class that year. These cards are definitely delayed gratification cards, but it's a nice gesture by Panini to try and get collectors cards of the best new players from this 12/13 hockey season. The cards do not state what players collectors will get, but they do state the team - these are similar to Upper Deck Artifacts rookie redemption cards. Panini has stated that their intent is to pick the very best of the new skaters and include them in the redemption checklist. 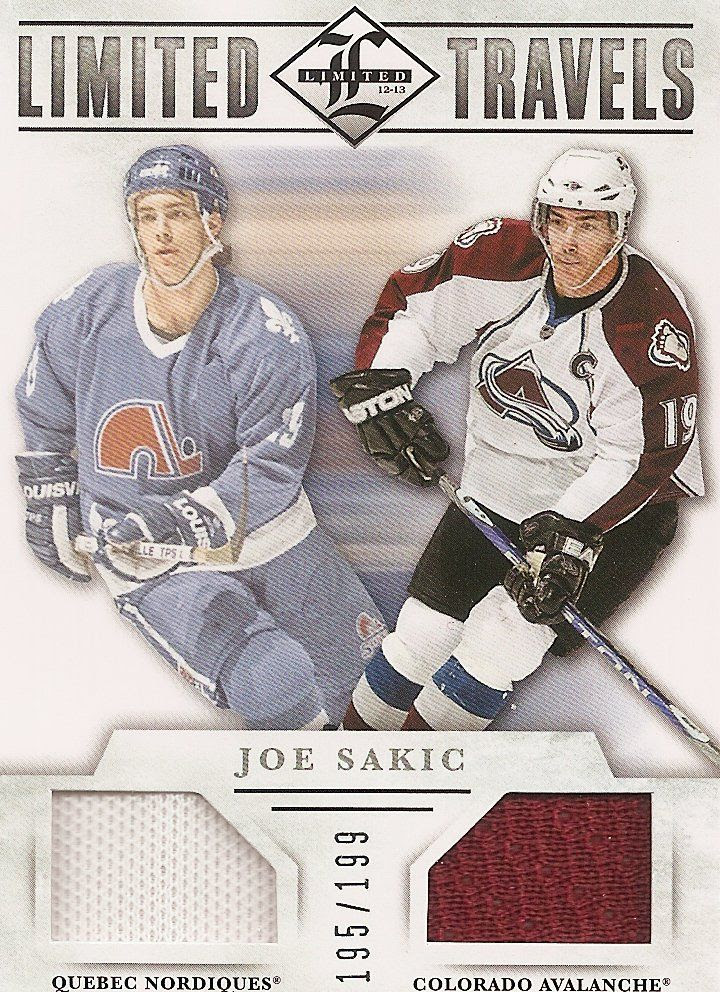 New this year in Limited are the Limited Travels cards. These cards document a player's movement between teams and highlights that movement with game-used material from their different teams' jerseys. It's a fun idea to incorporate material worn by the player while with different teams. I'm sure many player collectors will find these cards a unique and fun addition to their collections. I actually really appreciate what Panini has done here as I'm sure they have tried to get the appropriate material imbedded in the card. So often collectors find material in game-used cards that are mismatched with the photo used on the card. Here, it is imperative that Panini puts the right pieces in the right place. Though this card concept is certainly unique, I cannot say it is completely new as I have seen other companies (namely ITG recently) do this in their releases. 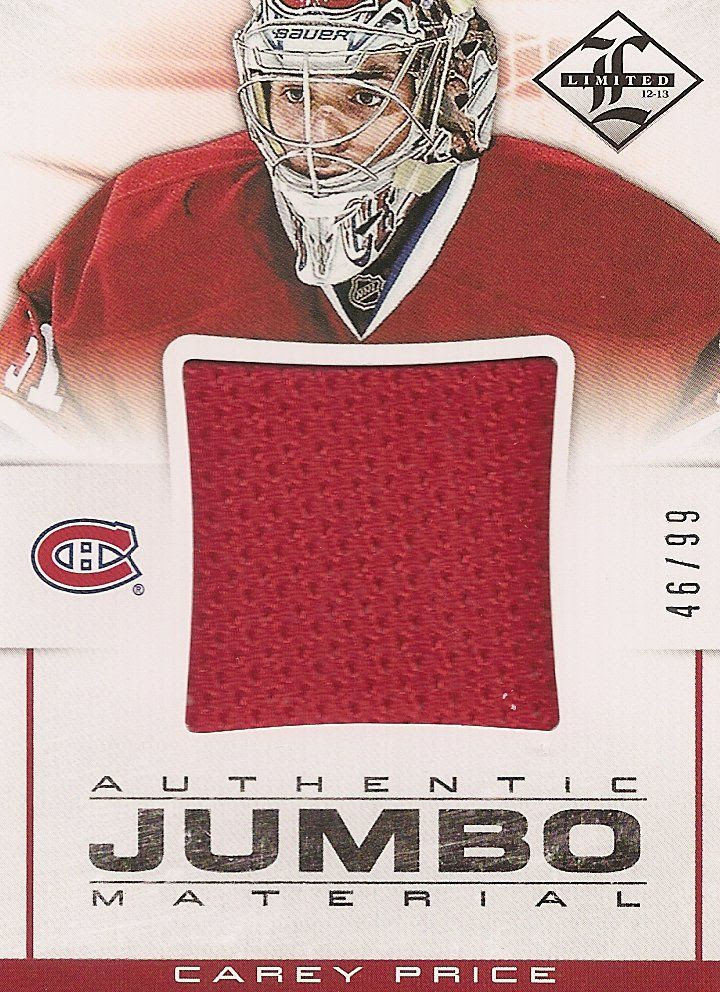 Back this year with a different look are the Jumbo Material cards. I remember pulling the black-background-horizontally oriented cards last year and liking them... this year I still like them... but these are now on a white background and are vertically oriented. I'm sure the designers at Panini wanted to change the cards up a little, but it's funny how these cards are pretty much the exact and direct opposite of their counterparts from last year. 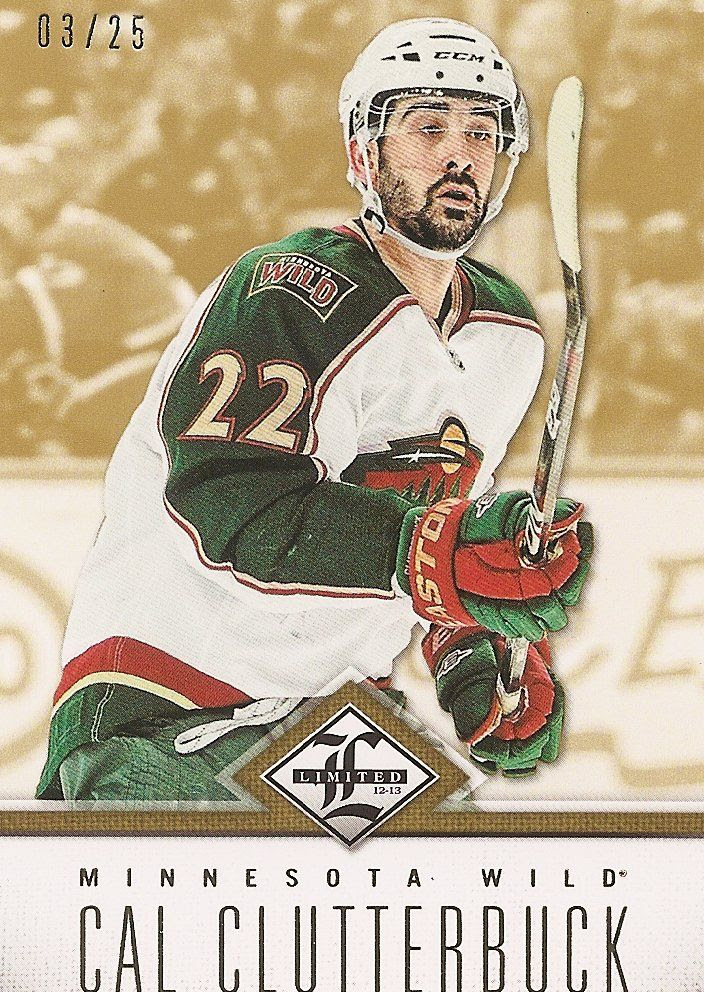 Like I said earlier, Limited has a ton of things to find in it - beautiful things. Collectors can look for gold parallels to 25... other parallels, puck pieces, on-card autographs of trophy winners and Cup champions, net pieces, patches, and even the entire Reebok logo from a jersey. There's just a ton of great looking cards to be found. Of course, the best will be tougher to find than the rest. Check out video breaks of the product and I'm sure you'll be impressed by some of the content you'll see.

Overall Value -
Though Limited has a ton of amazing things to find in it... it is a product that does not give its best cards out easily. Often times collectors will find, like I did, a few jersey cards and an autographed rookie manufactured patch card - cards that are not of great value for the $100 price point of a box. To really find the spectacular hits, collectors need to purchase Limited by the case... or by cases. Otherwise, the risk is a bit too high. I like to think about it this way... when looking for case hits, I like to think about the number of boxes per case. In Limited's case, it's 15. That's A LOT of little Limited boxes! Finding the one or two boxes with the big hit is a pretty tough proposition. At least with the mid-end or lower end products, not getting a case-hit will yield a bunch of cards. In Limited, there are only seven cards per pack. Though they are beautiful cards, it's just not a lot of cards!

So overall, I'd have to say that Limited is a product you have to really think about carefully when buying at the box level. You have to realize that the risk of getting some jerseys and a random rookie are pretty high. For me, I love to try everything, and I love taking risks on stuff like this... but it's definitely not for everyone. It's probably a smarter idea to simply find the singles of Limited you want after the big boy collectors bust it open and put their pulls on eBay.

But of course, the ultimate decision is with you! I personally like Limited and the way it looks. I'm definitely intrigued by what can come out of a box. But this year I think I'll be looking more for Limited singles rather than cracking a bunch of boxes. Let me know what you'll be doing with this new release from Panini!