ITG's 12/13 Heroes and Prospects came out earlier this week, sorry for the lateness of this review as it is harder for me to get these on release date compared to Upper Deck and Panini. Huge thanks to D&P Sportscards in Sacramento, Ca for carrying ITG products though! I know not everyone does. Anyways, I'm excited to see this year's edition of H&P! This staple ITG brand has always been a big hit with collectors. 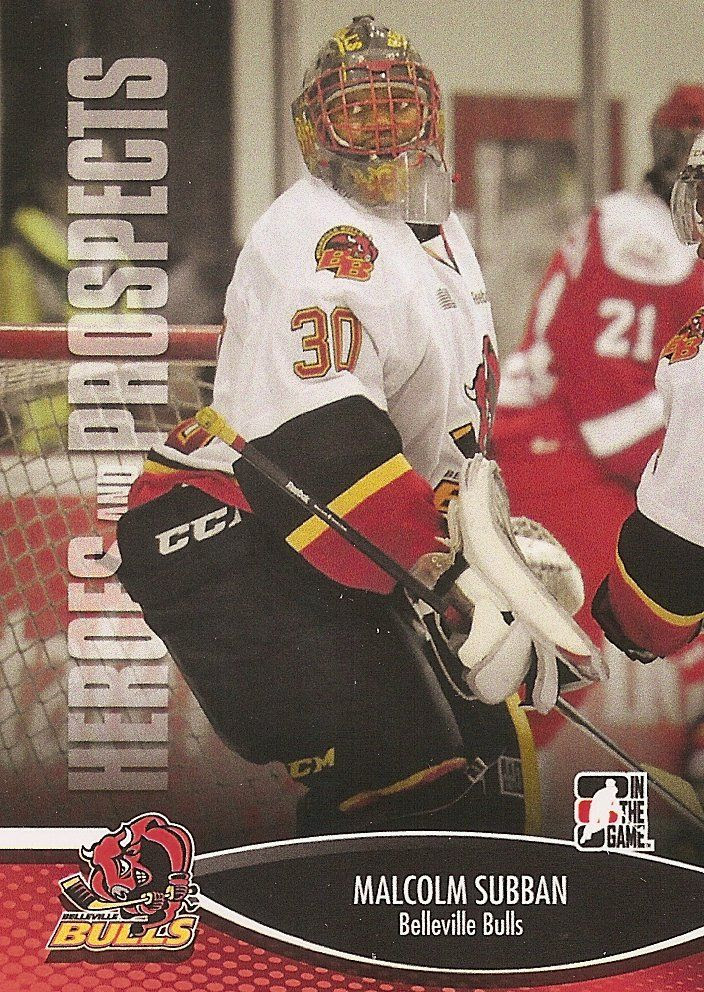 Base Card Design -
Heroes and Prospects has always been about showcasing the best and youngest talent before they hit the NHL, and collectors have traditionally flocked to this release to pick up the first cards of these young players. This year's base cards come in three varieties: Heroes, Prospects, and 2013 Draft Picks (in 3-D!). Most of the set will look like the Malcom Subban card shown above. The cards are pretty 'busy' in terms of design and action. Each Prospects card shows the featured player playing for their CHL team. It's a breath of fresh air to see team logos on ITG cards as they usually aren't able to with their NHL themed releases. The cards have an overall sense of minor-league-ness to them. And that's not a bad thing at all! They really capture the spirit of the CHL, and are totally appropriate for what they represent. To me the cards also have a hint of international hockey card design, cards that you might find produced in Sweden or Russia. Again, not a bad thing, just the impression I get when going through these cards. 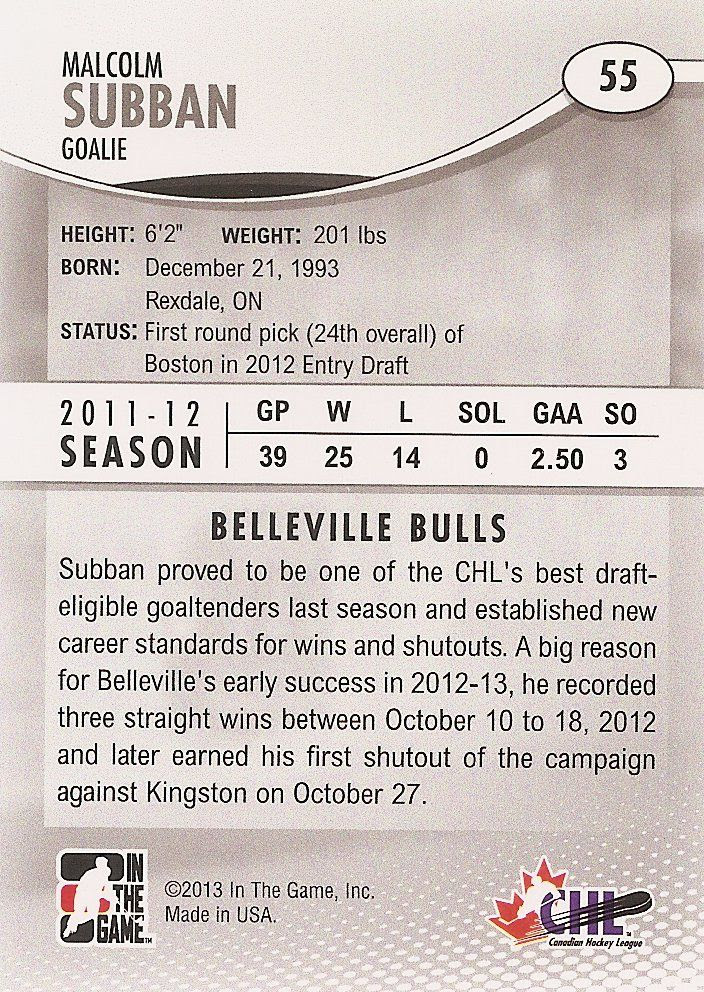 The back of the card is very traditional ITG. It's mostly devoid of any color except for the ITG and CHL logos. Though they are plain, the backs do have all the standard vital information and one row of statistics. The best part of the back has to be the information given about the player. Often times this product is the first opportunity to learn about these new upcoming players. The write-up gives a nice snapshot of who they are and how they have done. It'd be nice to have a fancier, prettier back... but I'm pretty used to the function over form with these cards. It's not a huge issue, but something ITG could improve upon in future releases. 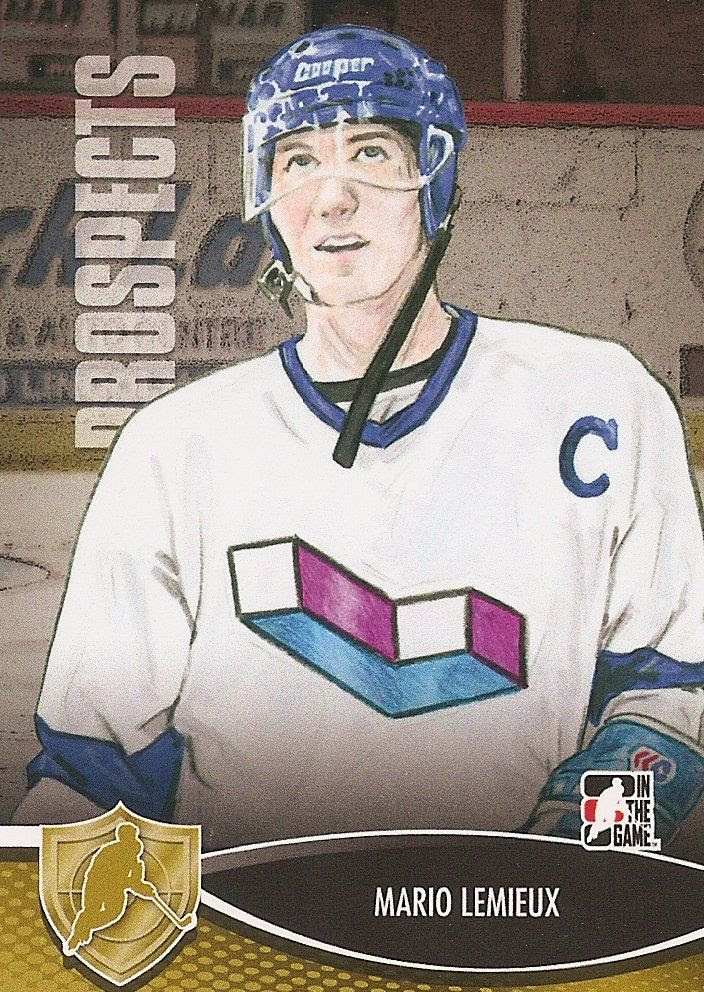 The Hero base cards really surprised me. They are absolutely amazing. Rather than using photographs, ITG has employed an artist to depict the players via art. And I have to say that the artwork done on these base cards looks sweet. This has to be my favorite artwork that ITG has used thus far. To me, these are more fun and cooler than the ones inserted into History of Hockey - not as elegant as those, but these have style in spades! I can see many collectors enjoying the look of these cards. 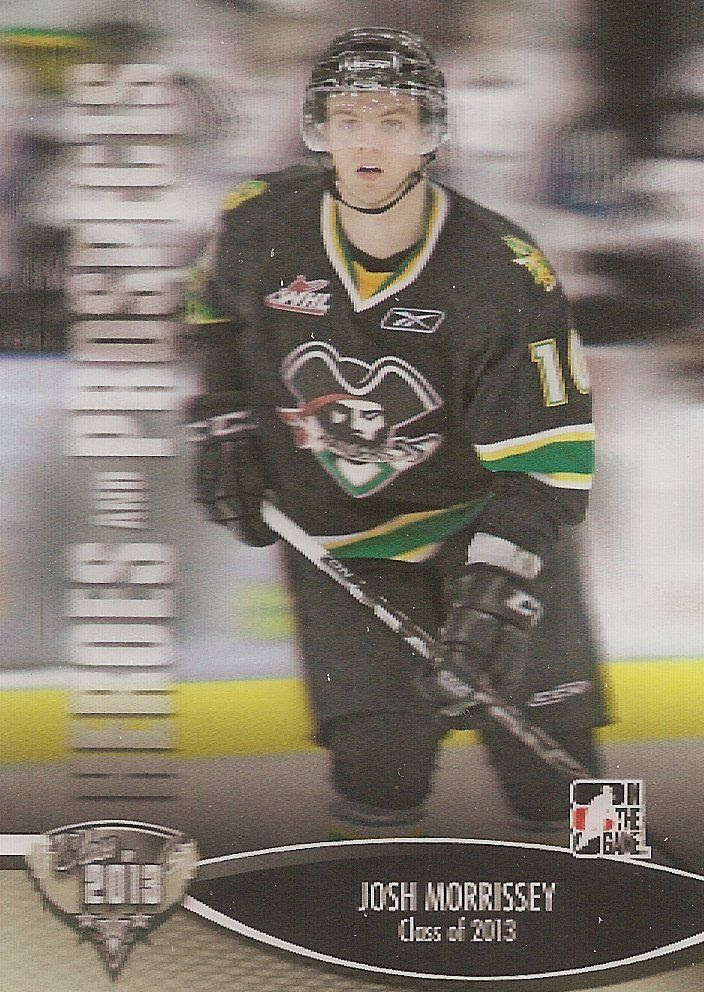 To cap off the base set this year, ITG has inserted 3-D 2013 draft pick cards. The basic design of these cards is similar to that of the Heroes and Prospects, but done with a three-dimensional coating. Obviously you cannot see the 3-D effect in the scan above, but I do hope that you can see one of these cards up close for yourself because these have been done perfectly. I remember Sportsflix 3-D cards of the past in baseball. Those cards were pretty neat, but the photo quality was always a bit blurry. The ones found here in H&P don't have that problem. These are done right. Looking at them makes you want to stick your finger into the card to see if you can reach behind the player and card design elements. These cards are short-printed and fall about two per box.

Inserts/Game-Used/Autos -
Though Heroes and Prospects is a mid-level priced product, there is quite a bang for the buck per box - collectors will find both autographs and memorabilia cards inside, as well as other inserts. There really is a bit of everything when breaking H&P. 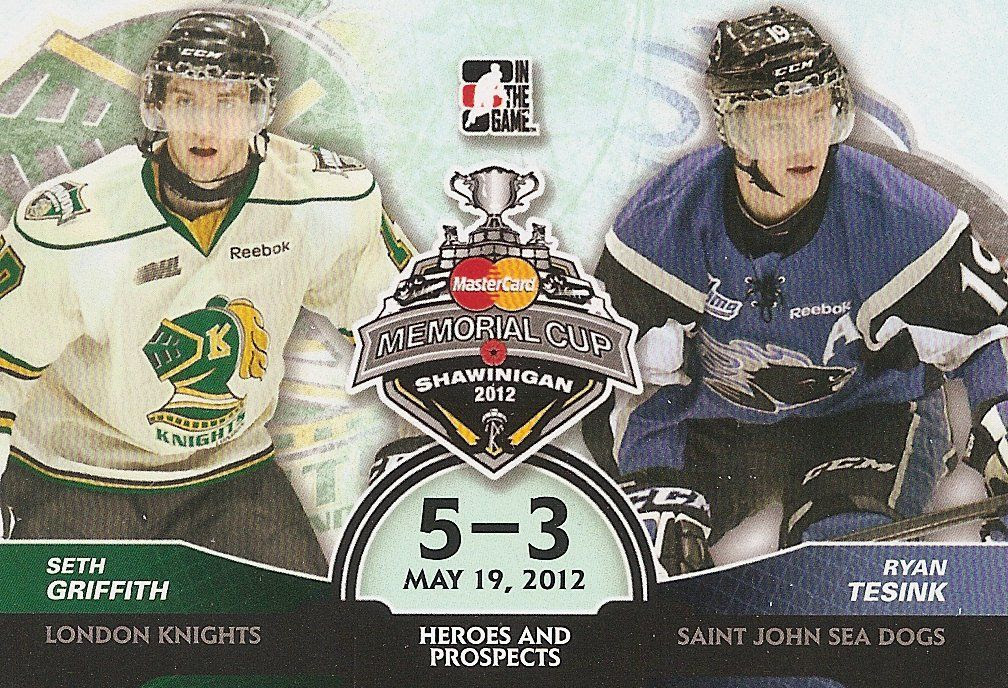 The box I opened up came with three regular insert cards. These cards had special numbering to set them apart from the base set. I've mentioned before that insert sets like these don't really do much for me. They are nice in that they showcase special events such as the card shown above, but these are cards I don't see being clamored over by collectors. To add collectibility ITG could have made these cards foil or even applied their 3-D technology to them. But as they stand, they pretty much as exciting as a standard base card. If anything, they could probably have just been absorbed into the base set as a subset of those cards. That would have made more sense to me with these. 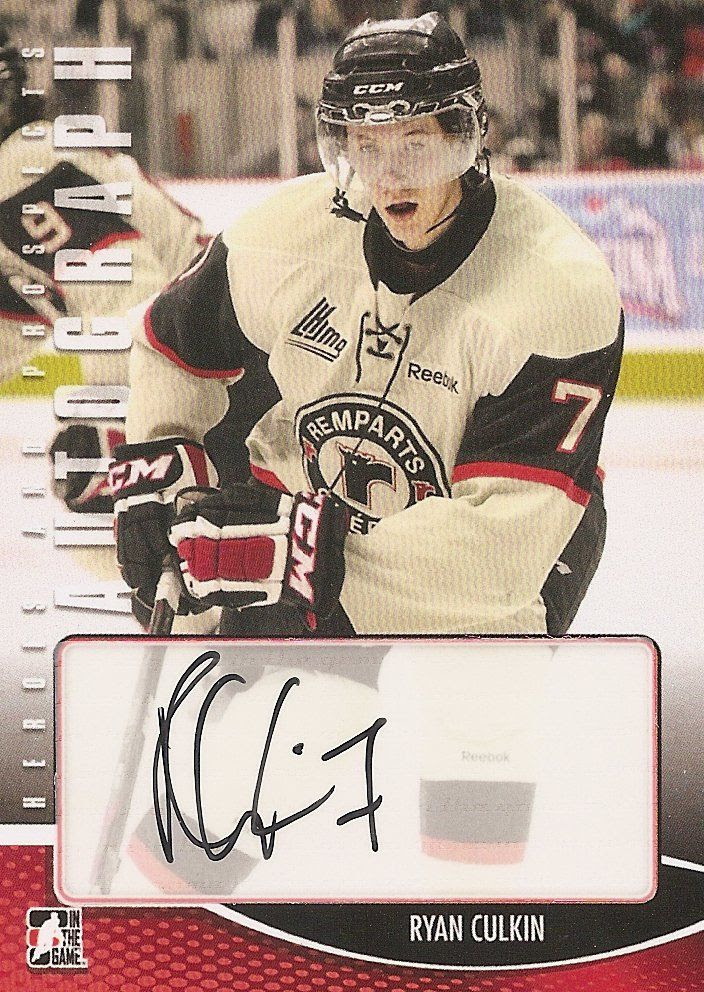 The H&P autographs this year have taken on a radical change in philosophy. In past releases, the autographs had their own (usually horizontal) design. It used to be a very standard looking ITG-type design that could be spotted a mile away... but not anymore! This year, the autographs come at collectors as a variation of the base card. I have to say that this was a brilliant move by ITG. The autographed cards look so much more dynamic in this fashion. Though these are sticker autographs, ITG has done a magnificent job of making the cards look 'right'. These aren't just stickers slapped on the front of a base card like *ahem* another company sometimes does. The entire card here looks cohesive. It makes sense. It looks great. And now collectors can put a little card rainbow together with the base cards and the autograph version! 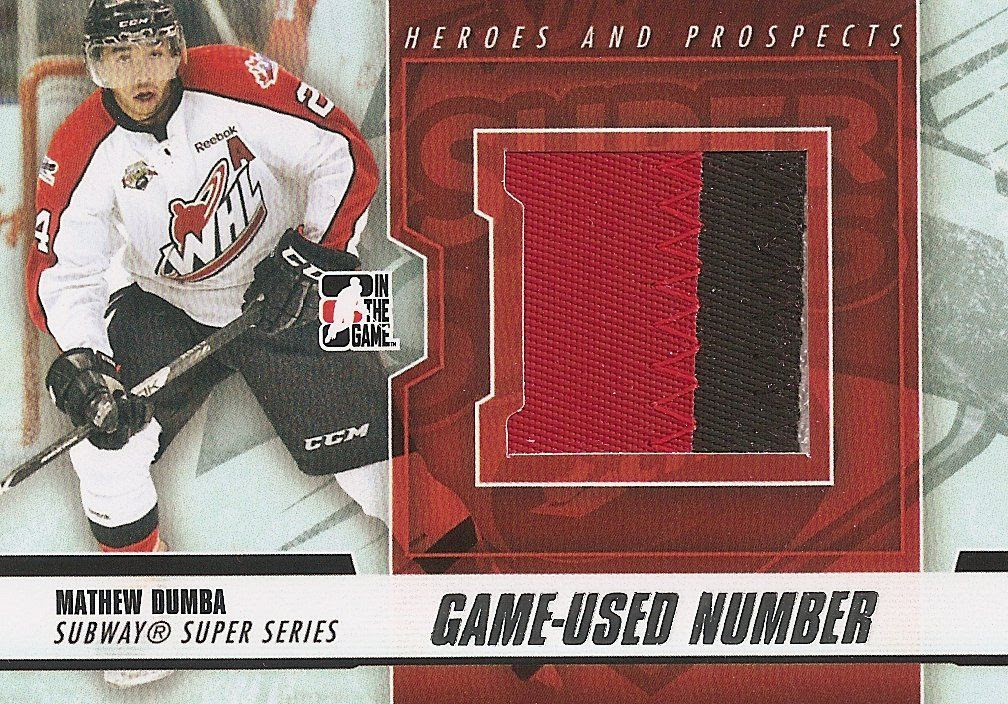 Unfortunately, I didn't get any standard jerseys in my box of H&P this time :) but I did get this Mathew Dumba Game-Used Number Silver memorabilia in my box. As usual, ITG does a remarkable job of letting collectors know where the inserted memorabilia piece comes from. In this case this part of Dumba's number was from his 2012 Subway Super Series jersey that he wore during a game. Like all the other cards I have reviewed, this card is definitely a step up design from previous years. The colors used on it are modern, and the design itself is clean and pleasing to the eye. Having the words 'Game-Used Number' in silver foil definitely makes this card pop. 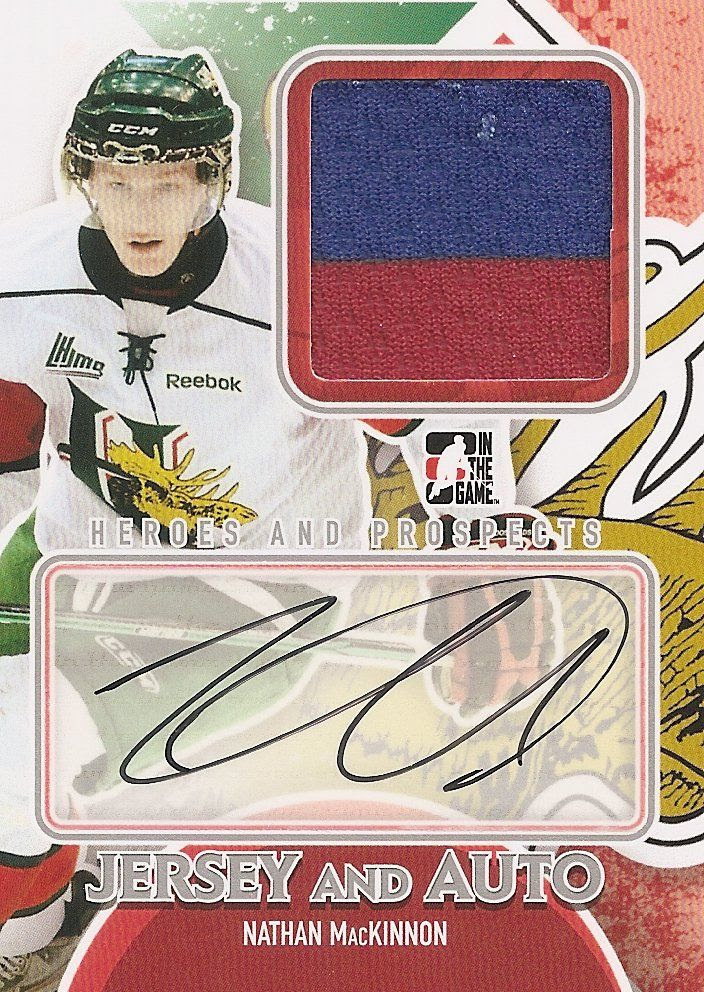 The nicest card from the box was either the Dumba number patch (limited to only three copies by the way) or this Nathan MacKinnon auto and jersey card numbered to 40. In terms of design, the Dumba is a bit cleaner... but I have to give kudos to ITG for making the entire background of the MacKinnon card the logo of his team. Having the player's team represented in the design of the card always scores big points with me, and here is ITG again stepping up to the plate and hitting a home run in terms of improving their card designs. 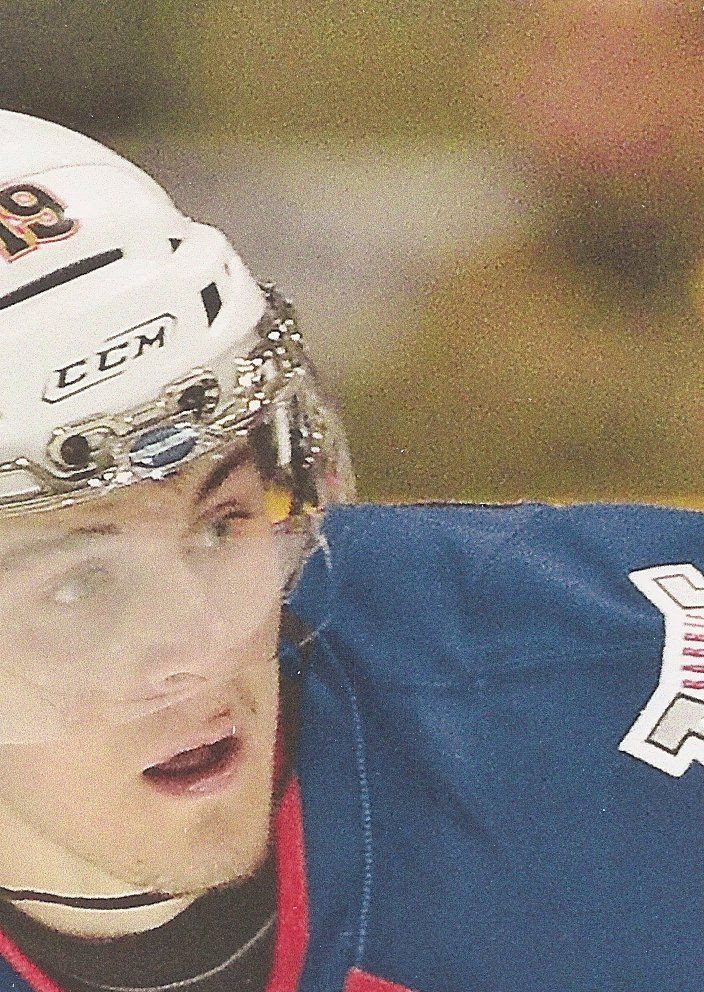 One last type of card I would like to mention are the 'He Shoots-He Scores' point cards. These cards are to be saved up and redeemed for special ITG memorabilia cards. Collectors will need to save up 150 points in order to participate in the redemption program. It's quite a bit to save up, but the cards collectors can attain through this will be very limited in number. And just like last year, the fronts of the cards can be put together like a puzzle piece to create a big image. It was a fun idea then, and it still is now - definitely reminds me of the old Donruss baseball puzzle from way back when.

There are many other things to find in boxes of H&P. There are Nameplate cards limited to only one copy each as well as Made-to-Order cards which give collectors a chance to tell ITG what they want in their card... so awesome! I hope you are one of the lucky few to find these amazing cards!

Overall Rating -
This year's ITG Heroes and Prospects is better than ever. ITG has improved upon this already impressive brand. There is a stunning amount of content to be found here - from standard jerseyes to autographs, to game-used numbers, nameplates, and more! Collectors will be hard pressed to find another product with better value and quality for the buck. Boxes of H&P can be found for under $100. And as H&P is a prospecting brand, you never know if the cards you pull will be massive hits in the future. This is a product that collectors should definitely not miss out on! I can easily recommend this product to just about anyone.

Check out my break of ITG's Heroes and Prospects at D&P Sportscards: