Here's the first of three breaks you'll be seeing of 10/11 Donruss in the upcoming months. Last week I opened up the first of three Pinnacle, and now here comes Donruss. Dacardworld putting these blasters into value lots of three was a great idea! For less than the suggested retail price, you get triple the amount of product.... how awesome is that? 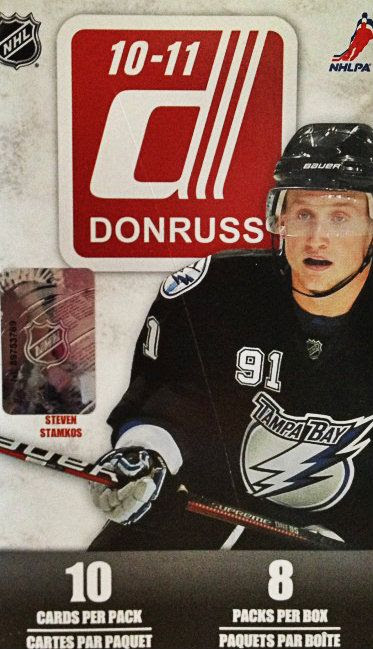 Three blasters of 10/11 Donruss cost me just a touch under seventeen dollars. If you check out last week's Pinnacle break and compare, you'll notice that it was a little bit less expensive than Pinnacle. And that's how it really should be as Donruss is brand that is a step below Pinnacle in terms of quality of product. It's not that Donruss is a terrible product. It's not. But comparing the two brands side-to-side, it is apparent which brand has more of a premium feel to it... even if it is slight.

Though Donruss is a lower price point product, there are still interesting things to find within the blasters. I remember being able to find a variety of inserts and rookie cards within the boxes of it. One of my favorite cards to pull in the past were the Rated Rookies in old baseball products. There wasn't anything that special about the card except for the fact that it had a Rated Rookie logo on it. Well, that little logo is pretty iconic now, and it can be found in 10/11 Donruss. Some of the Rated Rookies found in these boxes have autographs on them. It'd be awesome to find one in this box!

Let's take a look at what comes out of this Donruss blaster box:

Review -
I mentioned that though Donruss and Pinnacle are very similar in price point, there are differences that put Pinnacle ahead of Donruss. One of the main differences is in the photography used. Whereas Pinnacle has unique and interesting photographs, Donruss uses pretty standard fare. The cards feel generic in both the pictures they use and in their overall design. As I was opening the packs, I found that I really didn't care to carefully look at the base cards. To me that's a little sad... but I don't blame myself... the base cards were just boring! In a past review, I lamented the fact that Panini missed out on an opportunity to create a really retro feeling product with Donruss. Panini did produce a sweet retro themed Donruss basketball product around the time this was released. But for hockey they came out with this... a product that is neither here nor there... and easily lost amongst the host of other product choices on the market.

As I was opening my blaster I was keeping an eye out for a jersey or autograph card. In pretty much all my previous blasters of Donruss, I believe I had at least gotten a Boys of Winter jersey card. This blaster had no hit in it. Though I expected a hit, the blaster box does not explicitly say that one was guaranteed. So I guess not all of these will have one. I did, however, get three Rated Rookie cards and one other insert. I was ok with Rated Rookies I pulled in this box, but the design of the Rated Rookie card was appalling to me. I just couldn't fathom why Panini would put cards out that have a giant space reserved for an autograph and not have the autograph there. The least they could do was print cards that did not feature the autograph to not have the giant space there. Those huge spaces make the card look wrong - a lazy move by Panini that year. 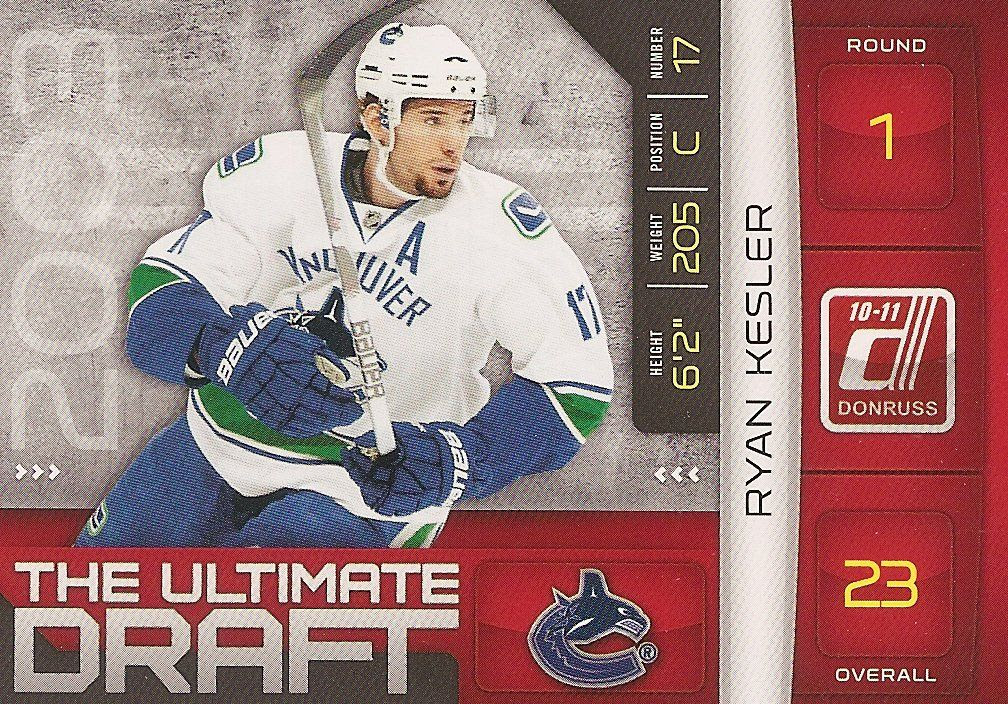 #3 - Ryan Kesler Card No. 17 (The Ultimate Draft Insert Set)
I usually wouldn't put Ryan Kesler into my top three (as he's on one of the Shark's biggest rivals), but there was very slim pickin's in today's break. Though I'm not a huge fan of the player, I do like this card for some reason... I think because it's very 'Donruss-y' to me. It must be how the graphics, color, and design come together, but this card screams Donruss. The Ultimate Draft concept is an interesting one as the set has some 'interesting' inclusions as well as many superstar omissions, leading me to wonder what the point of this insert set is... if it's the 'ultimate draft', where are players like Crosby, Ovechkin, and the like in this set? 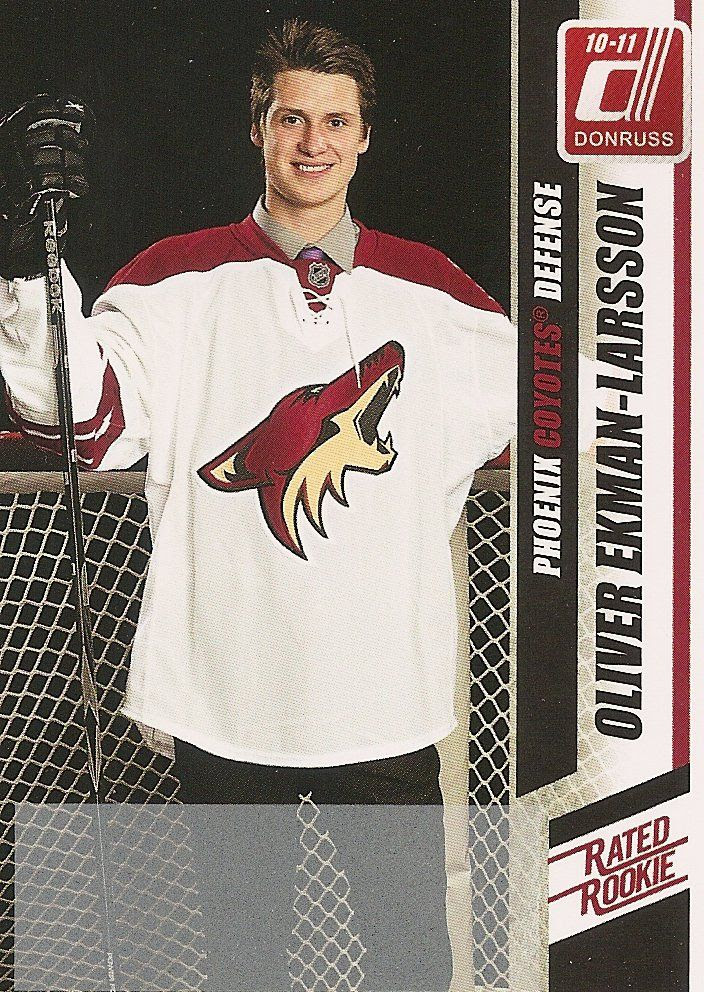 #2 - Oliver Ekman-Larsson Card No. 290
Ekman-Larsson is definitely an up and coming defenseman in the NHL. From what I have seen, he has a small, but dedicated fan base of collectors already. My only big concern with him is his position. It's so hard for D-men to rise up in the hobby. It also doesn't help that he plays for Phoenix. But other than that, I think OEL has star potential, and I'm happy with this pull (except for the giant blank space!). 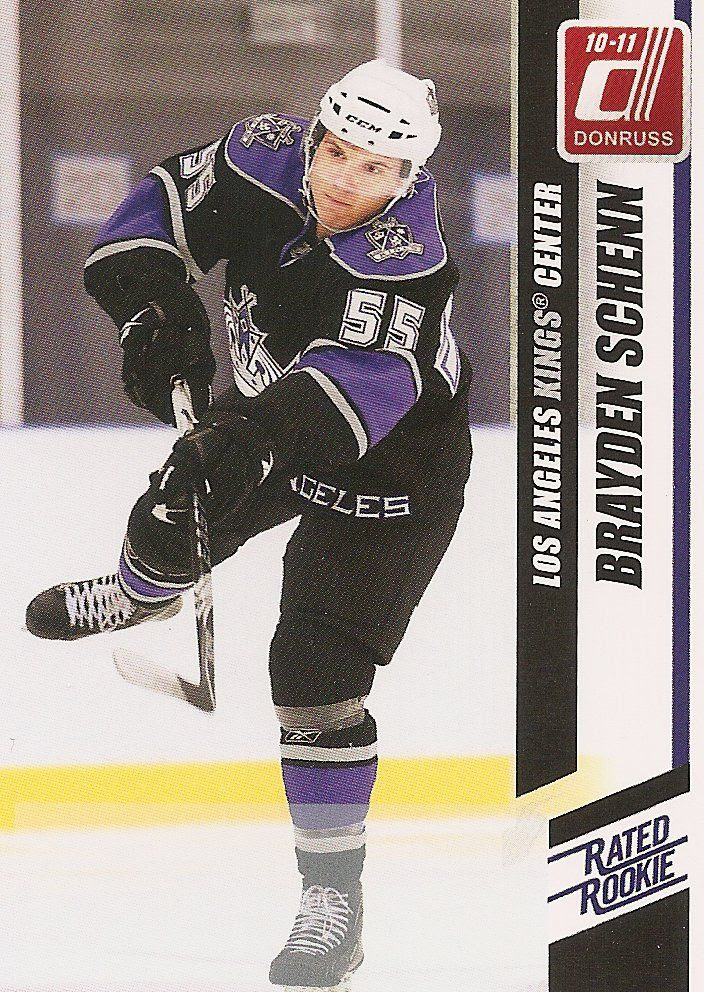 #1 - Brayden Schenn Card No. 295
Schenn was one of the second tier rookies in 10/11. While most people were really chasing Hall, Eberle, Subban, Seguin, and Skinner... getting a Schenn card wasn't a let down. He was definitely an 'ok' pull. His cards haven't taken huge nosedives - he's actually remained fairly popular in hobby circles. Though this card shows him in LA kings gear, he is now a part of the Flyers. He's been getting playing time recently, so hopefully he can take advantage of that and become a star in the NHL.

Overall Value -
Breaking the Donruss box was fun, but in terms of value, I would have to go with Pinnacle for the price. There are certainly things to find in Donruss, and if you're looking for something a little different, it could definitely be a product you can consider for purchase. It's price point is so low that it almost doesn't matter. It's a product you can rip when you feel that itch - and you won't feel bad for spending too much!

Let me know what you thought of my 10/11 Donruss blaster down in the comments below. Have you ever gotten anything good from a bunch of loose retail packs? I'd love to know!

Look for a new episode of Retail Review every Sunday!
Posted by luke. at 7:35 AM