Hockey is back!!! Up today is a blaster of 10/11 Panini Pinnacle. This was part of a 3 box lot that I bought during the holiday sale at dacardworld. The current price of these blasters is three for $19.95. That's practically buy one get two free - a pretty darned good price if you ask me. I actually got it for slightly less than that as I did get it during their sale... I love a great deal! 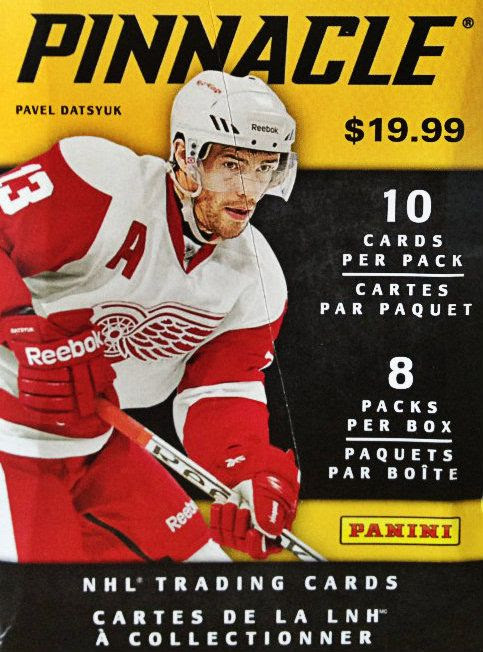 So, using my amazing math skills, I was able to calculate that these 10/11 Pinnacle blasters were less than $6.75 each. And though it doesn't state it on the box, I have seen a hit (usually a jersey) come out every blaster of this opened. So for less than one of those terrible eBay hot packs, you get a hit, a few inserts, and a pile of base cards. It's a fun buy that's hard to pass up.

I'm sure that most blasters will just have the standard jersey card inside it, but the side of the box does say to look for Tough Times autos, Pinnacle Pencarft, and Ice Breakers Autographs. I'm sure these cards are very difficult finds, but it's very cool to know that there is a chance of pulling one.

Let's take a look at what comes out of this Pinnacle blaster box:

Review -
As I opened this blaster I was reminded of how much I disliked the design of Pinnacle that year. Though the photography was very good and unique, the design elements Panini employed had much to be desired. I feel they brought down the photography rather than elevating it. So instead of having a very classy product like Upper Deck 1 and 2, these cards felt quite a bit lower in quality. Also, as I was opening the packs, the cards felt 'rough' as I was going through them. It's probably because of the gloss they used on them. It's not a huge deal, but it was something i definitely noticed as I was trying to look through the cards this time around.

On a more positive note, I did like the inserts I found in this blaster. I'll mention the best of them in my top three, but a couple cards I enjoyed pulling aside from those were the Nufex foil cards. The Nufex cards really make the base cards look cool - and I wish these cards were more collected by collectors. As just a 'simple' parallel to the regular set, these cards go above and beyond the call of duty. They don't just have an extra little stamp or foil color change... these cards are fully foiled in a special way to make them stand out. I really like these parallels and I'm glad they had them in both 10/11 and 11/12 Pinnacle.

Let's now take a look at what I thought were the best cards from this blaster box: 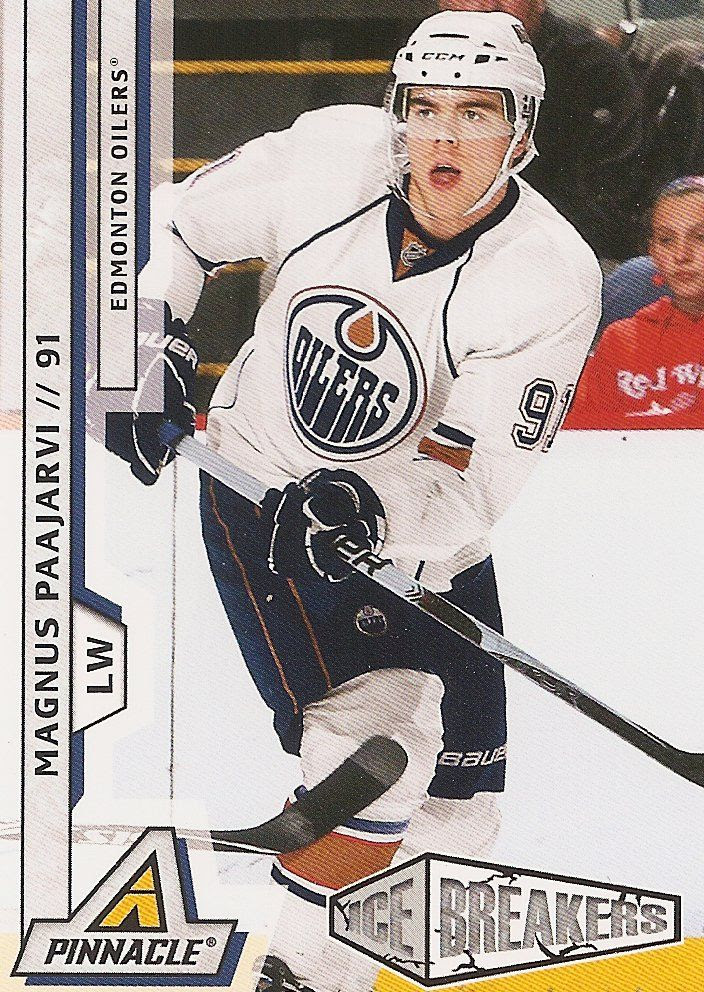 #3 - Magnus Paajarvi Card No. 219
Magnus 'the Pirate' Paajarvi was one of the hotter rookies back in 2010-11. Though he was not nearly as desired as Hall or Eberle, collectors generally were happy when pulling his cards. Last year Paajarvi struggled and now his cards have taken quite a down-turn. He's still a young player, so there's hope for Paajarvi still, but i wonder if he'll be able to bounce back into collector's minds. Paajarvi makes my top three because of his former collectibility, possible potential, and because he was the only rookie I pulled today. On a side note... look at that hideous Ice Breakers logo... YUCK! 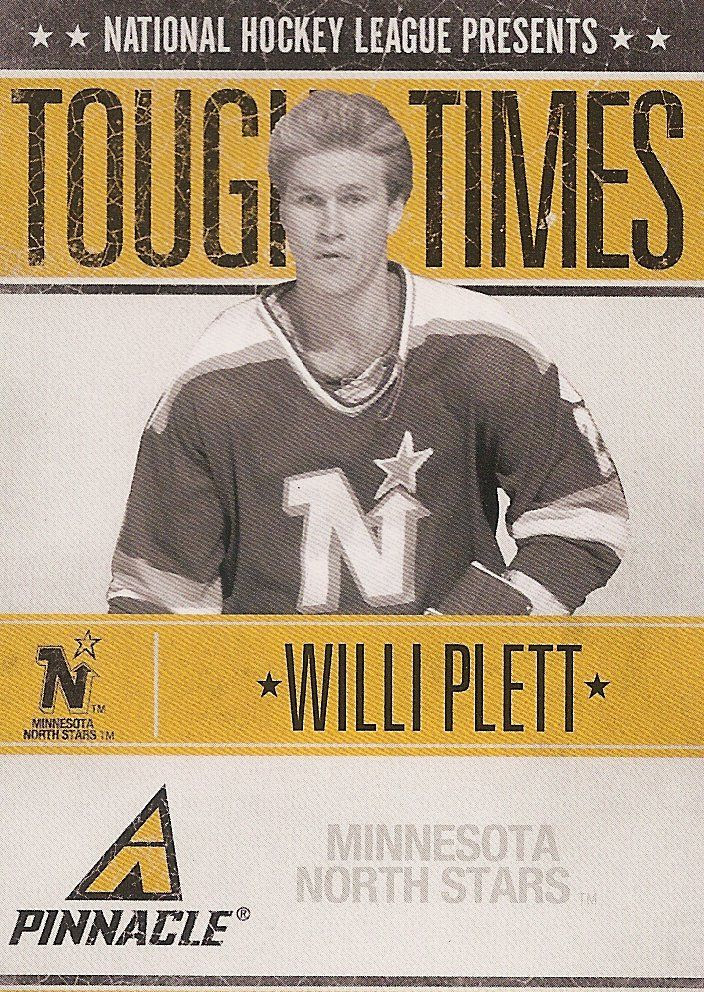 #2 - Willi Plett Card No. WP
I had never heard of Willi Plett before today, but thanks to this card, I was able to find out that he was a very interesting player. According to the back, Plett was from South America (crazy... because who from South America plays hockey!?!), didn't play hockey until 13, and also won the Calder Trophy in 76-77. That's a pretty amazing story line! And in terms of this card, there is a lot to like about it. The North Stars logo is a welcome sight, the color scheme is absolutely perfect for a 'tough guy' type card, and it's always awesome to see older jerseys of teams that once were. The only thing this card needs is the autograph! 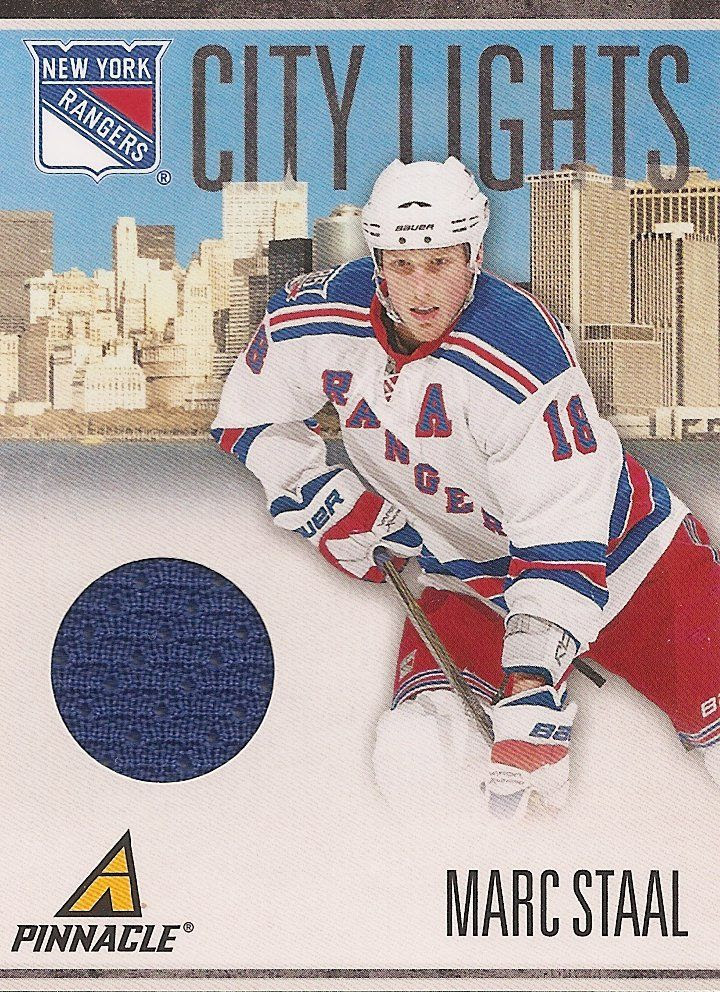 #1 - Marc Staal Card No. 93 (City Lights Set)
I've stated before that I like the design of the City Lights jersey set, so it's no surprise that this card shows up as number one in my top three this week. It doesn't matter what sport... having the city represented on card is always a winning situation. I'm a big fan of the large image of Staal in front of the skyline. Though the jersey patch window is pretty small, I'm glad I was able to get a nice blue swatch. It complements the card very well. Lastly, this card features serial numbering. It's pretty rare to have serial numbering on standard jersey cards like this, so having it there is a really sweet addition.

Overall Value -
As I mentioned at the beginning of the review, this blaster was phenomenal value. How can you go wrong with the price? The answer... you really can't! It's a fun break with a good variety of things to pull. 2010-11 was a great year for hockey cards. Buying products from that year will always give collectors a chance at netting something they will enjoy. I highly recommend getting in on these blasters if you're tight on a budget, trying to fill out an online order, or if you're just looking to enjoy some hockey cards.

Let me know what you thought of my 10/11 Pinnacle blaster down in the comments below. Have you ever gotten anything good from a bunch of loose retail packs? I'd love to know!

Look for a new episode of Retail Review every Sunday!
Posted by luke. at 7:53 AM