I should be set for a few months of Retail Review as I just made a major purchase at dacardworld! I'm really looking forward to busting these products in the weeks to come, and hopefully you'll enjoy seeing what comes out. This first break is a 24-pack lot of 09/10 Upper Deck Series 1. These packs were on sale so I just had to pick them up. They were less than $1 each - a no brainer for sure! 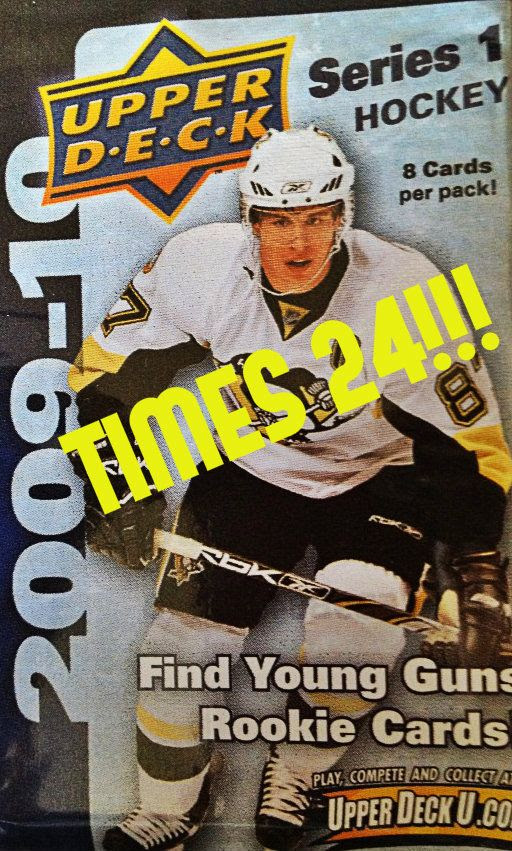 So at the price point I felt I had to get in on this product. I mean, come on, it's 09/10 Upper Deck Series 1, one of my favorite years of Upper Deck. It was the first year I began collecting again so I have a lot of fond memories of it. And I still haven't ever pulled a John Tavares Young Gun... so I'm going to keep taking chances at it whenever I can do so.

That being said, these being loose packs has me a little worried. I'm not sure where these packs came from. I have nightmares of them being from searched Wal-Mart or Target shelves. What if I open them and there is nothing but base cards? Man... that'd be terrible! Let's hope not.

I'll be happy to find a few Young Guns, even if they don't turn out to be Johnny T, Matty D, or JVR - the big three that year. But if I do happen to get one of those... this would be a pretty successful 24-pack romp.

Review -
I was a bit worried at the beginning of the break as no Young Guns were coming out. In my head I was going 'Uh oh, uh oh, uh oh...', but thankfully that didn't last too long and by the midway point the first Young Gun came out. Though I didn't get any of the bigger names, at least I was able to pull three with one being a decent name. So in 24 packs, I was able to get three Young Guns. On video I was a felt a little relieved to get them since my initial thought was that I would get zero... but after taking a step back, I definitely feel like I got gypped. See, the back of the pack states that the odds for Young Guns are supposed to be 1:4. So I missed out on the odds - there would have been six Young Guns in a perfect break. Ending up with only half that amount kind of blows!

Speaking of the Young Guns, I noticed that packs with a white decoy in them each had Young Guns in the packs. Since the backs of the packs are a little translucent, and the white decoy is on the back, I wonder if this is a way of searching out Young Guns in 09/10 Retail packs. I'm not sure... but it definitely makes me wonder. That would really be too bad if it were as it makes things quite unfair. I remember buying from a box of 09/10 Series 2 when I started collecting and getting absolutely nothing from them. I must have gotten half that box. Did I just find out why?
Aside from the Young Guns, I did end up getting a variety of other insert cards. They weren't especially exciting, but I did get a few superstar players, which was nice. Martin Brodeur definitely was an early haunt in this break. He stopped showing up when the Young Guns started coming out though.

Here are my picks for the best of this break: 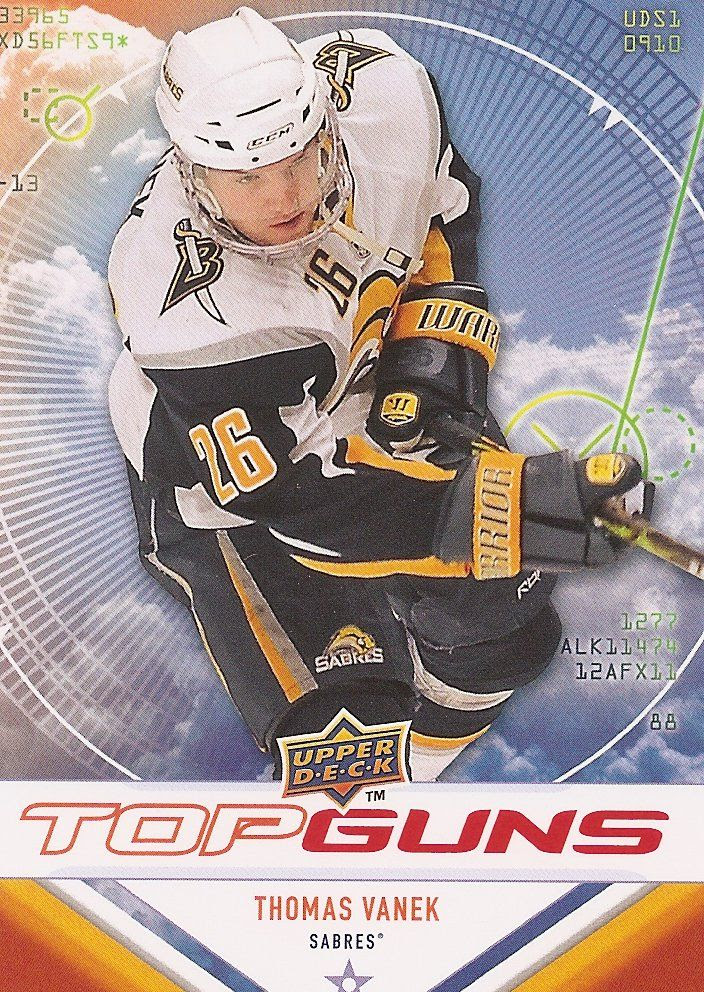 #3 - Thomas Vanek Card No. TG6
Vanek was one of my early PC players. For some reason he kept following me around my early hockey card breaks. I actually ended up with a fairly nice PC collection of his. Included were auto/patch cards from The Cup as well as some very low numbered hits of his. Because he followed me so much in my breaks, and because Buffalo was one of my favorite teams, I chose to collect Vanek's cards. I don't PC him anymore, but every time I pull his cards I remember the time that I did. 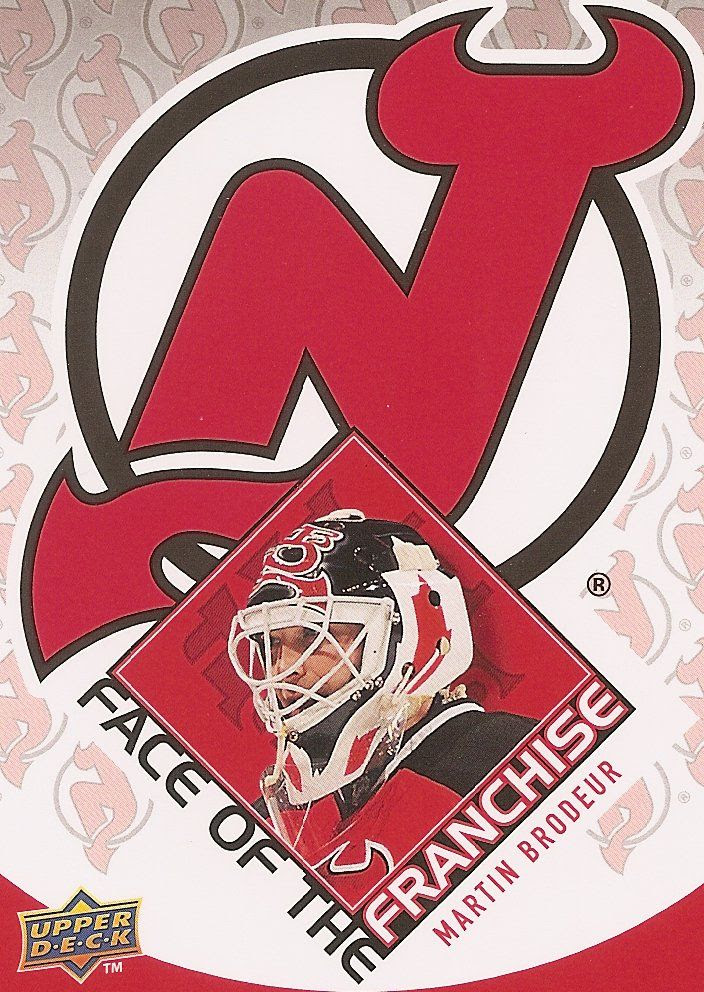 #2 - Martin Brodeur Card No. FF14
Speaking of following me... Marty certainly did early in this break. This card stands out to me because of its unique design. I find it funny how large the designer chose to make the team logo... I mean... it's huge on the card! I have to admit it is quite attractive though. The Devil's logo is one that I've always liked, so seeing it this big with one of their most historic players is makes for a sweet card experience. 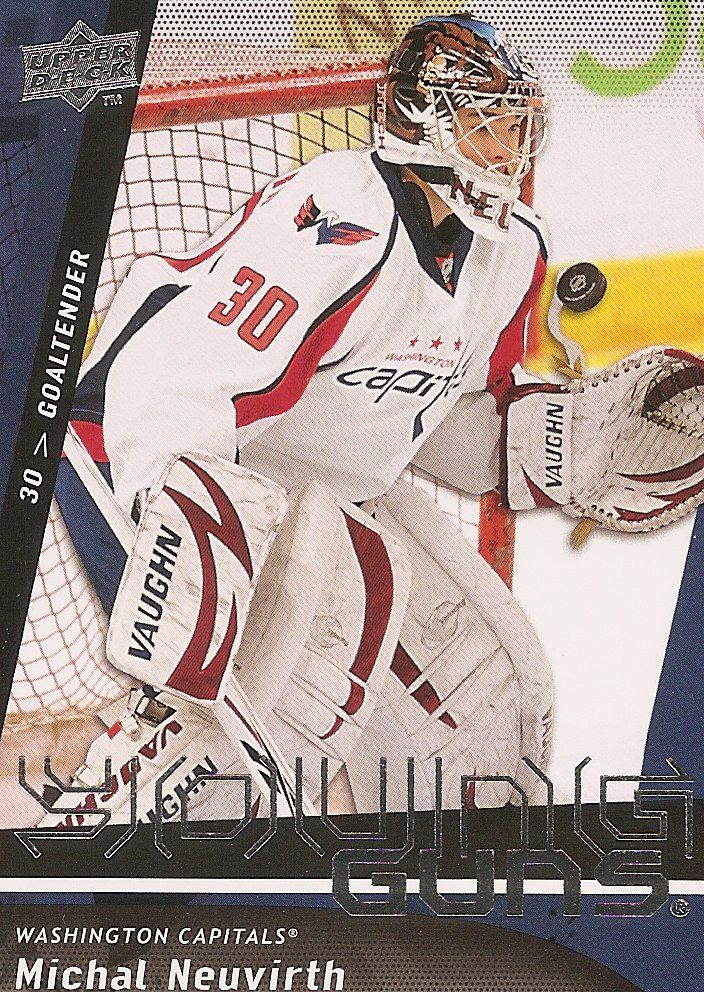 #1 - Michal Neuvirth Card No. 235
Neuvirth made a bit of a splash (though not a huge one) when he came on the scene for the Caps. I remember that his cards did gain some interest and an increase in value... so it was nice to get his Young Gun in this big lot of packs. He's definitely not a major pull, but he was the best Young Gun I got, so for that he gets the number one spot this week.

Overall Value -
For a little under $17, this was a great value. Twenty-four packs of cards! I would say, though, that I'm not sure if I'd make this same purchase again. The possibility of searched loose retail packs is just too scary a thought for me. I totally trust dacardworld, but not knowing where these packs came from makes me a little nervous. Sealed boxes of these same retail packs are sold on the site, but the price for that is a bit of a step up from the loose packs.

I am still glad I made this purchase. Busting 24 packs is a whole lot of fun with a lot of cards to check out and see. Maybe next time there'll be a Johnny T.

Let me know what you thought of my 09/10 24-pack lot down in the comments below. Have you ever gotten anything good from a bunch of loose retail packs? I'd love to know!

Every Sunday look out for another exciting installment of Retail Review!
Posted by luke. at 7:32 AM