Since my big online retail order hasn't come in yet, and I liked last week's Goodwin Champions break so much... I decided to do another! When I went to Target to pick up the blaster box of 2012 Goodwin Champions, I almost decided to go with something else. There was a blaster of 12/13 Upper Deck on the shelf staring at me in the face and tempting me to buy it... but when I saw that this was the last box of Goodwin, I had to choose it. Let's hope for some fun stuff inside! 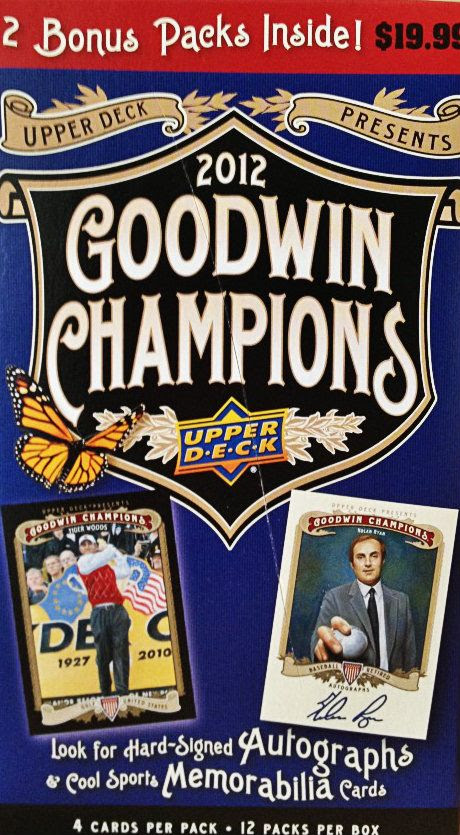 There's not much new to say about this product since I just opened up a box last week... but I do hope to pull a hit out of a box - that would be really nice. I shouldn't keep my hopes up though as getting hits from these blasters is TOUGH!!! Autographs come 1:48 and memorabilia come 1:96. So really the chances of landing one are slim. But, that's what we as collectors do, right? We're always hoping to get that hit from the box.

My last box of Champions had a ton of big time superstar names in it. Though they were just base cards, I was able to land Gretzky, Crosby, Woods, and Jordan. I'm wondering if I will be able to do the same with this box.

Well, the best way to find out is to get ripping! So let's take a look into this blaster:

Review -
This box didn't contain as many big names as the last one did, but it was still really fun to break and see the variety. I am again puzzled by the inclusion of the Military Machines glossy insert cards. They just feel so out of place within the set. No other cards in the set feature non-people images. It's just weird!

Though I'm just a moderate golf fan, I was pleased to pull out quite a few golfers in my blaster this time. None of them were as big as Tiger Woods, but it was a nice to see a nice selection of them on cardboard. My two favorite golf pulls had to be Nancy Lopez and Steve Stricker. Lopez was a golfer in the late 70's and her card shows her wearing 70s clothing - which is awesome. And Stricker is depicted in front of the leader boards. It's a unique and eye-catching card.

Also of note was pulling Mike Tyson. I'm not a boxing fan... but everyone knows Iron Mike. He's a scary dude! I remember I was never able to beat him in the old Nintendo game Punch Out! He was really, really tough.

Let's see which cards made my top picks this week (no Sidney Crosby this week!): 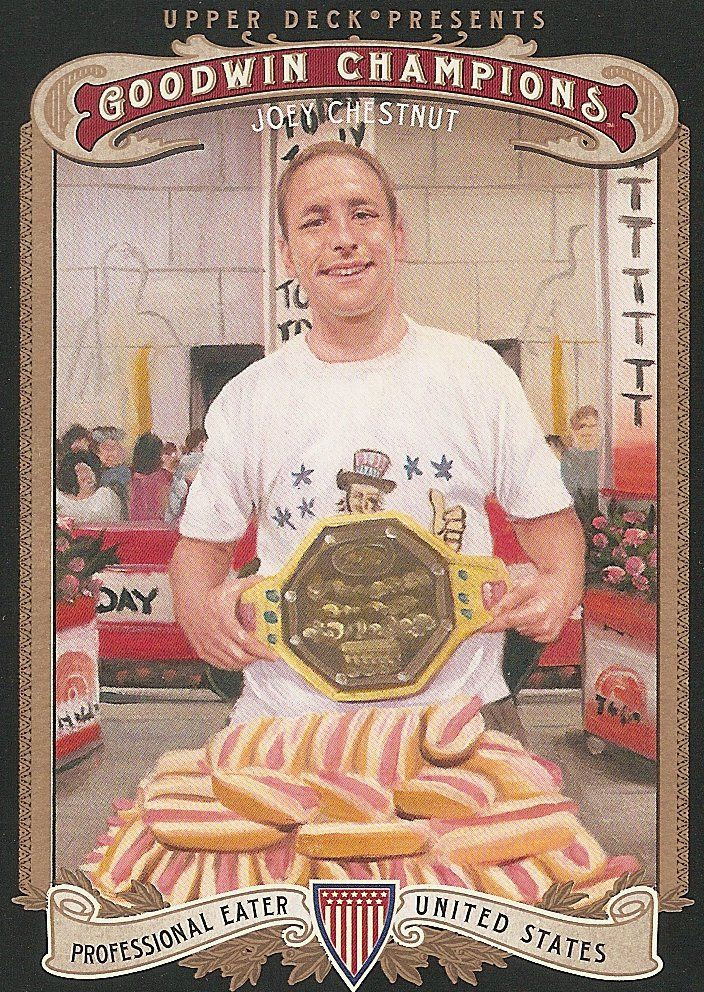 #3 - Joey Chestnut Card No. 121
Another pro-eater! I can't get enough of these guys! I just think putting pro-eaters on cardboard is the funniest thing. Obviously Chestnut isn't as cool as a little Asian girl eating a boatload of hotdogs, but he did beat out Kobayashi (the former number one) in 1997 - which was pretty incredible as Kobayashi was THE top guy back then. In 2009 he consumed 68 hotdogs in 10 minutes. How ridiculous is that?!?! BTW, LOVE the hotdogs on this card! 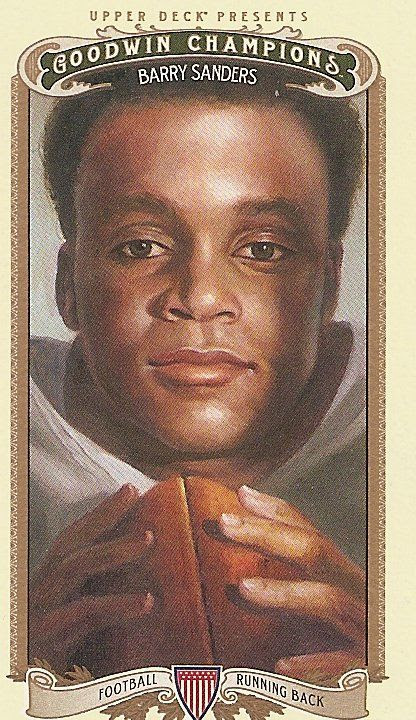 #2 - Barry Sanders Card No. 99 (Mini)
I remember watching Barry Sanders when I was in high school. This guy was an amazing running back. He was smaller, but he used that to his advantage to slip out of trouble and break free for amazing touchdown runs. This mini card of his is a great looking card. I love how close up the image is. You really get all you need to in this card... Barry and the football. Many people questioned why Sanders retired so early... but I think it was a good choice. He went out at the top of his game - and he is at legendary status. 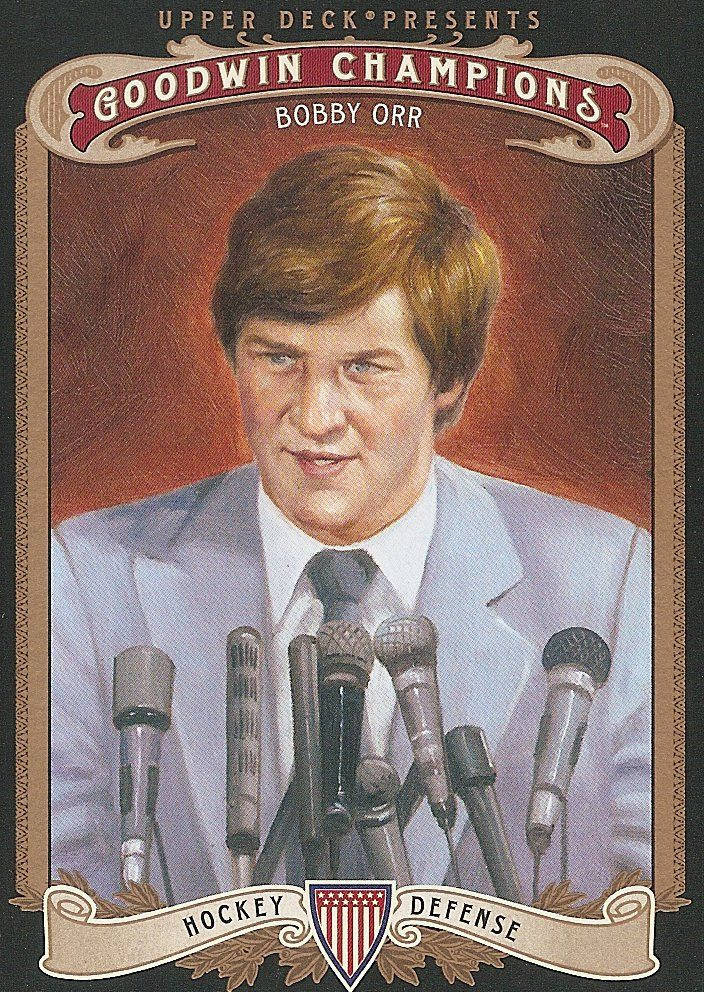 #1 - Bobby Orr Card No. 1
Hockey takes the top spot with one of its greatest athletes... Bobby Orr. There are many action shots of Orr, and that's why this one stands out so much - for it's lack of action. It's really cool to see Orr in a sweet baby blue suit and tie. The vintage vibe on this card makes it a real winner. Cool microphones too!

Overall Value -
I'd have to say this box wasn't as good as my last one. Perhaps if there was a jersey card inside, I would have a different opinion... but it is what it is. Still, I did really enjoy breaking the box and checking out all the cards inside. Products like this are a really great way to add some more hockey cards to the collection, but also acquire cards of other sports too.

I'd still say wait until these blasters are cheaper online before making the plunge into one, but there are there if you have the itch for something a bit more unique than your standard all-one-sport break.

Let me know what you thought of my 2012 Goodwin Champions blaster box down in the comments below. Have you ever gotten anything good from one of these? I'd love to know!

Every Sunday look out for another exciting installment of Retail Review!
Posted by luke. at 6:40 AM