Instead of creating a ranking of products like I did for the 2011-12 products, this year will be the slimmed down abbreviated version. I'll only focus on the top products from each company - and ITG is included this year! I'll also have a few special categories for at the end. But first, I'll say a few words about the 11/12 collecting year.

2011-12 was, I would have to say, an average year for hockey cards. Collectors will often judge a year's collectibility by the rookie class that comes out of it. Obviously, we don't know who will be the hall of famers and NHL mainstays from the 11/12 class, but as it stands now, 11/12 has only given us one really stand-out 'hobby' rookie - Ryan Nugent-Hopkins. He was the player that just about anyone would have been happy pulling out of a pack or box. Will he continue being a hobby hot pull? Well, only his play and time will tell. I'm not saying the other rookies are terrible... certainly they are not... but they didn't have the huge hobby impact of RNH. Other popular rookies this year included Gabriel Landeskog, Adam Henrique, Sean Couturier, Carl Hagelin, Mark Scheifele, Louis Leblanc, and Cody Hodgson. Each of these rookies had their hobby hot moments in 2012, but as we all know, they can't all be big time pulls in the future... in fact, most of these players will sadly fall off the hobby radar in the next two or three years - if not sooner. But that being said, one or two could be a surprise super star and capture collector's attention (I'm looking at you, Steven Stamkos!) - isn't that what we just love about our fine hobby?!? 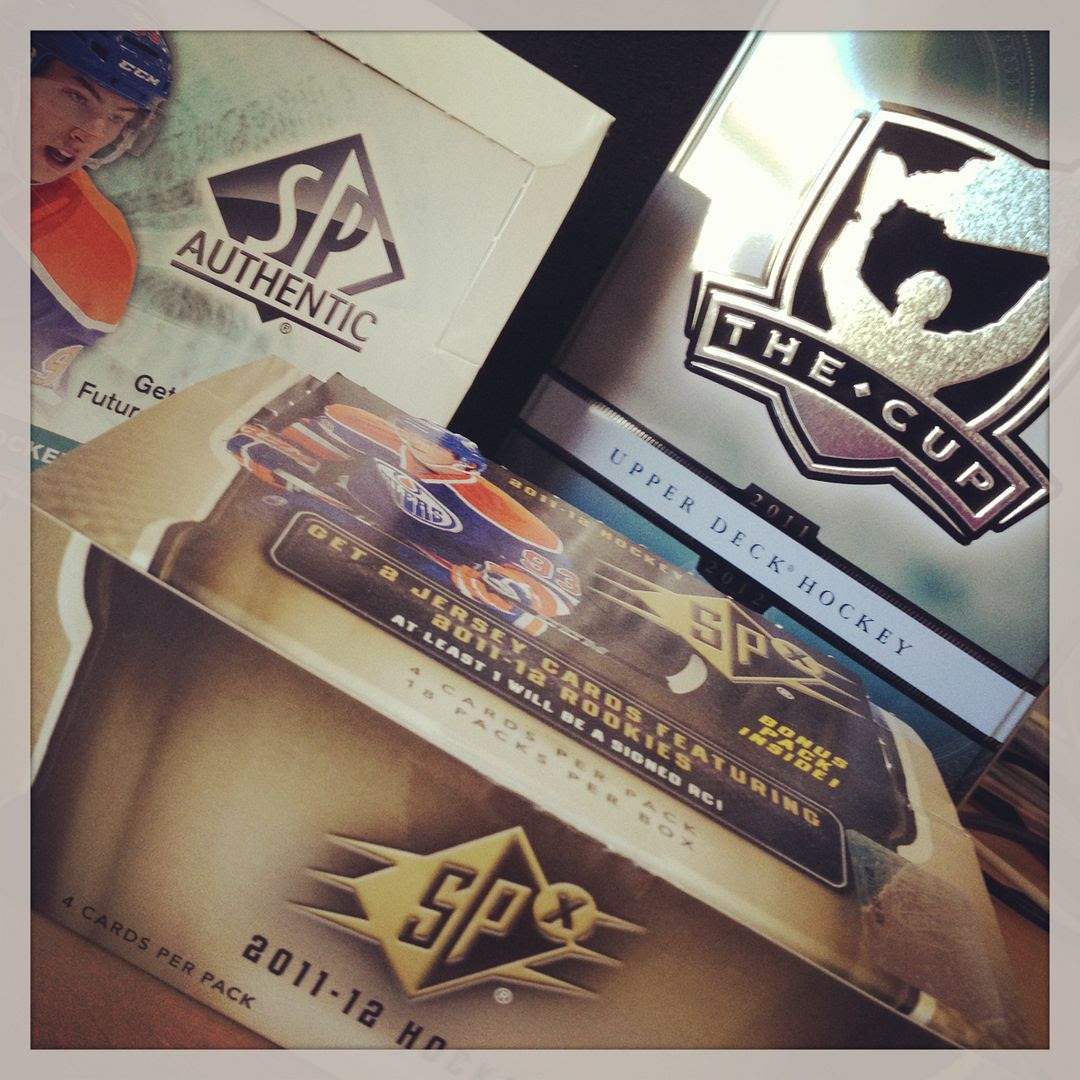 Upper Deck gave collectors tried and true products this past year. While they tweaked and modified the contents of their mainstay brands, UD products pretty much gave collectors what they expected - which wasn't bad at all as UD products were again some of the most sought after cards in 2012. Collectors love stability and legacy brands - Upper Deck certainly delivers that, and it's shown by the overall value of Upper Deck cards holding a greater value all else being equal than their competitors. 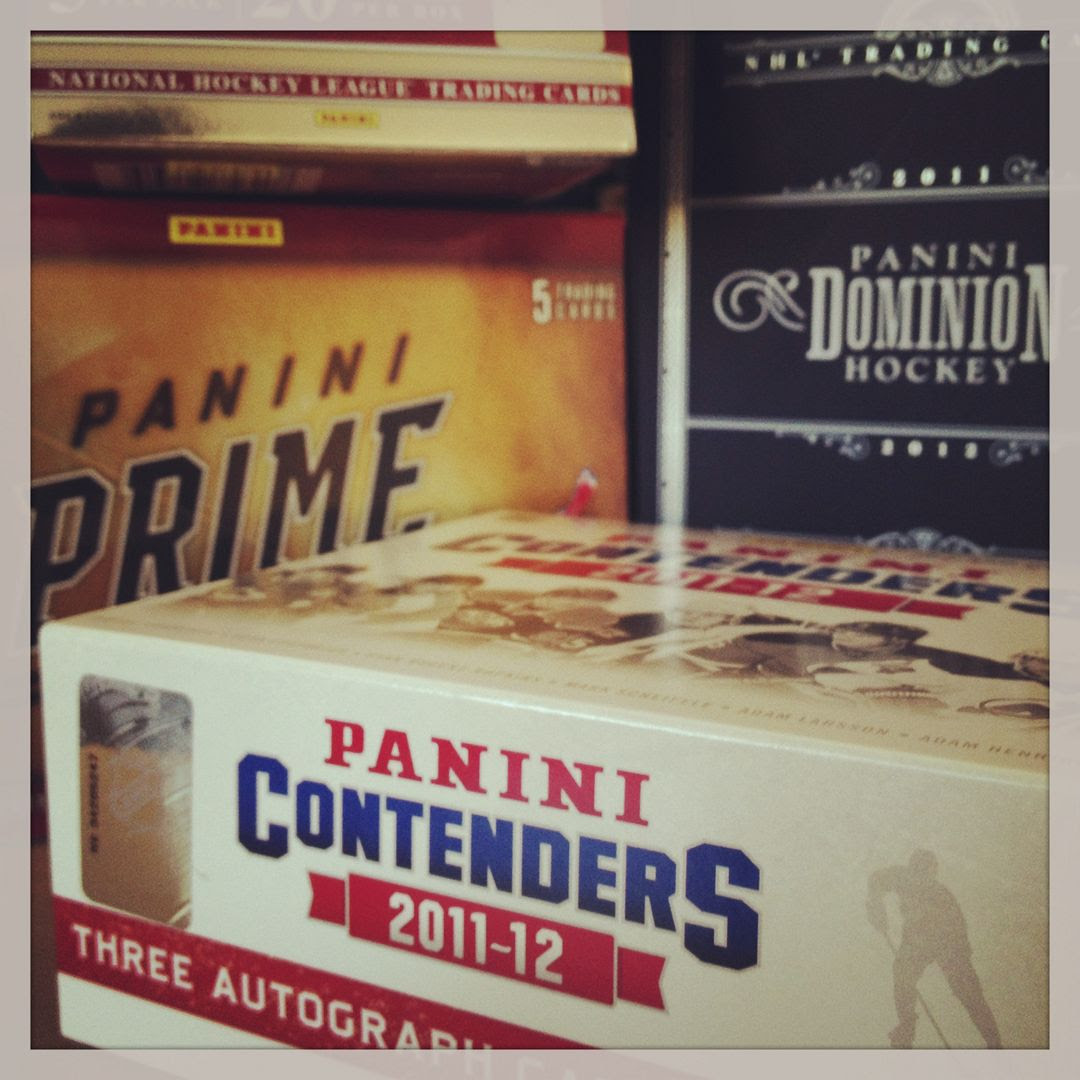 Panini spent the year in transition. It was plain to see that they were actively modifying their card lines and adjusting to collector wants. I have to commend Panini for really shaking things up this year. Their attention to their customer's voice has to be applauded. For 11/12, Panini axed Zenith, Donruss, and Luxury Suite... they came in instead with the new Rookie Anthology and Prime, and brought back Titanium and Elite. I felt that though Panini had both hits and misses with their line-up, overall Panini took a step in the right direction. Hopefully they will establish some continuity that helps collectors have confidence in their products' future values. 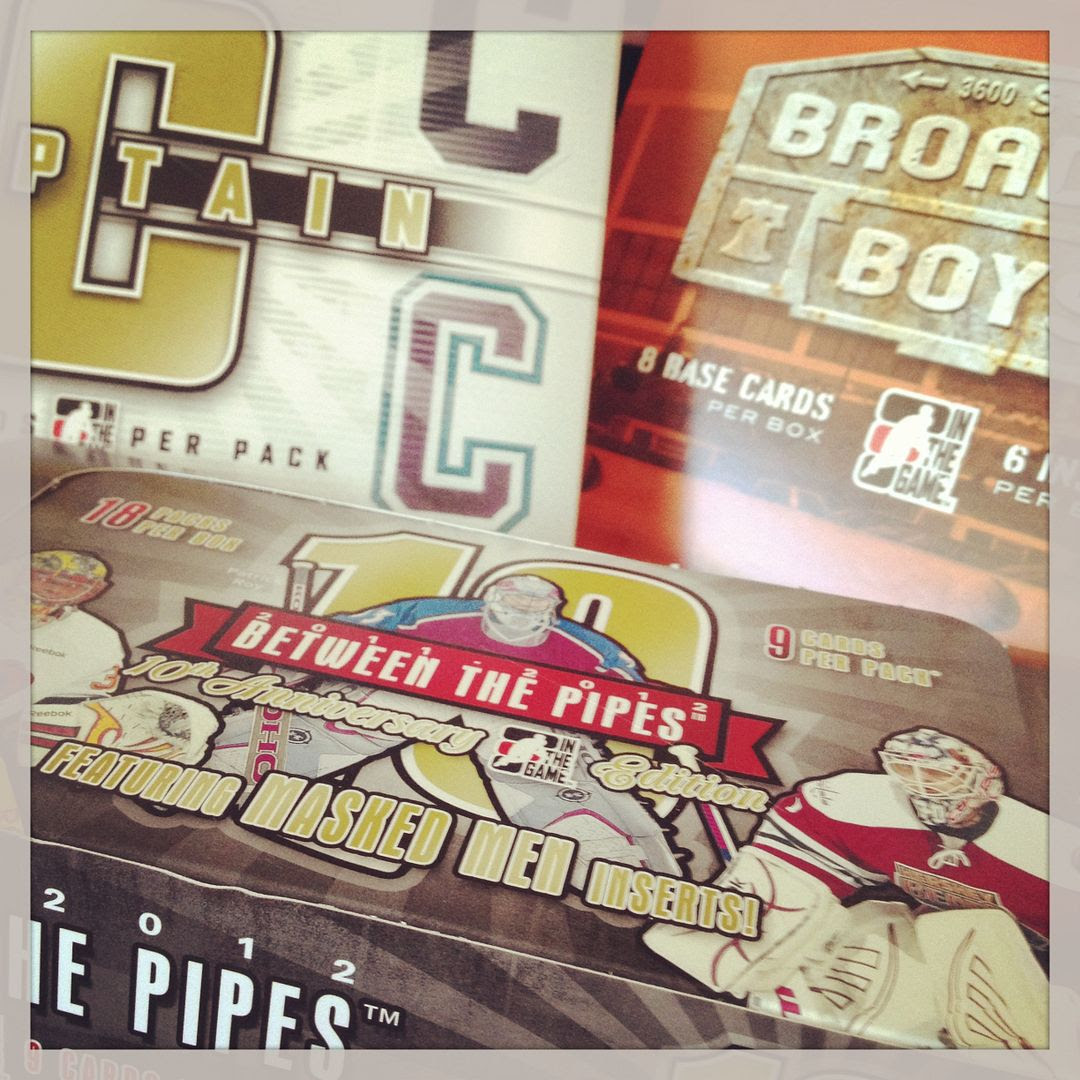 ITG, like Panini, had a very interesting year filled with both new products and old. Their staple brands of Heroes and Prospects, Between the Pipes, and Ultimate were big hits with collectors. All of these products had a significant bump up in terms of their design quality in 2012. Besides the lack of an NHL license, the biggest beef with ITG in collector's minds has to be in the card design department area. I have to say that ITG has had some significant improvements here. And that's great to see. As for new products, ITG came up with some real collector favorites. Captain-C was hot right fromt he get go... and Broad Street Boy and Forever Rivals gave two big collector bases two must-have products to buy. ITG looks like it's going strong and has already given collectors a lot to talk about in 2012-13 with some intriguing releases already. 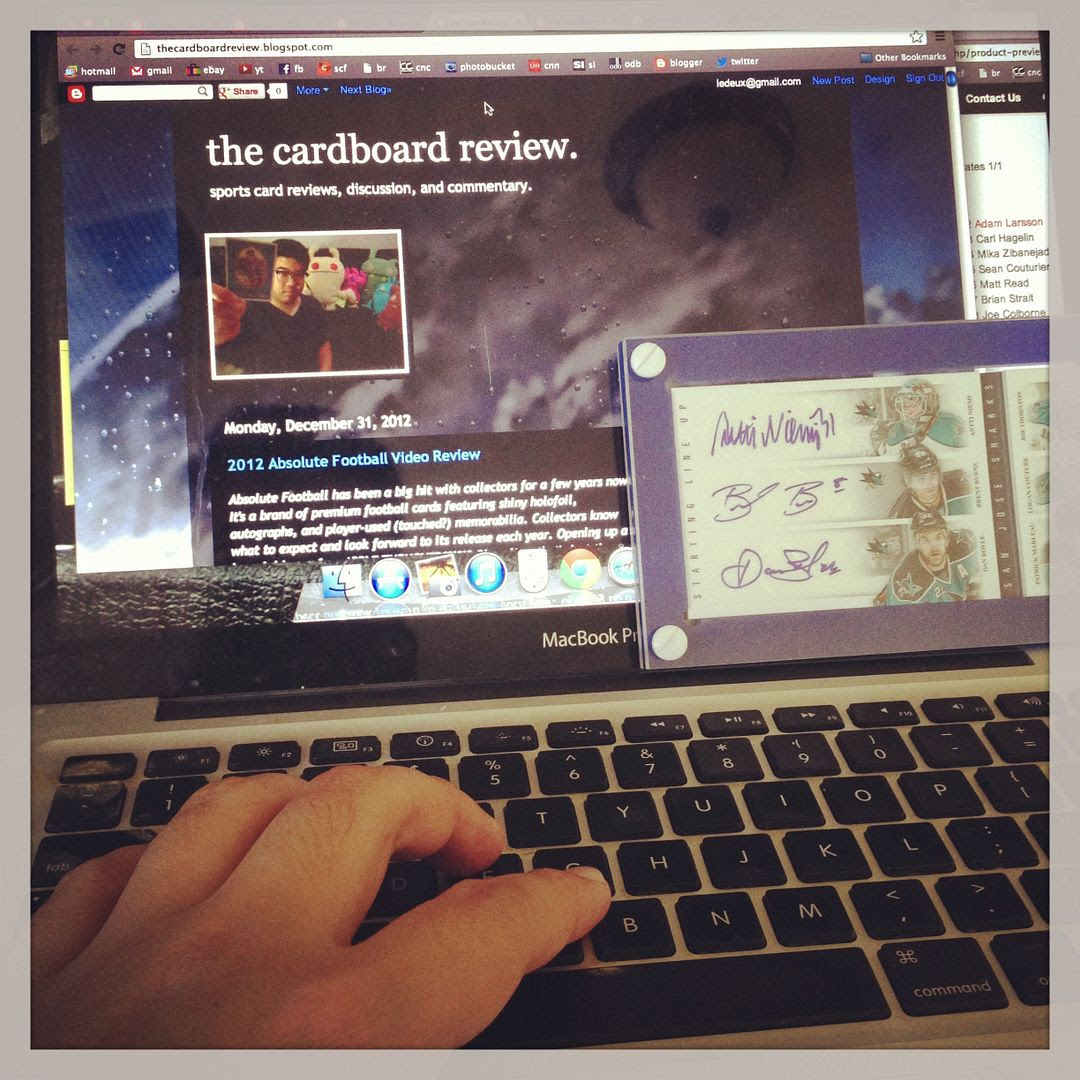 As for me here at the Cardboard Review... I've had a blast this year! I really want to thank everyone who has been reading my reviews and watching my videos. This year I started a new series called Retail Review. I thought it be a great way to add content to the site between the lulls of product releases. The response I've been getting about that has been overwhelmingly positive... and I'll keep it up through 2013 (and maybe beyond!). I'll try to think of more content to add to the site this year. If you have ideas in mind I'd love to hear from you! 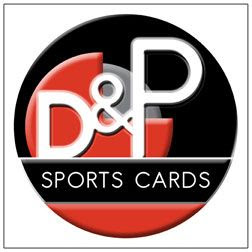 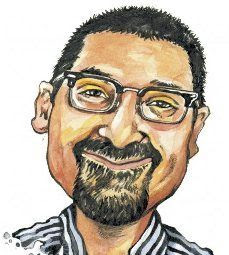 And lastly, before I reveal the top products from each company this year... I want to thank two people who have helped me out a great deal this year. First it has to be Chris over at D&P Sportscards in Sacramento. He's the only one in the region who has hockey cards to buy. He also helps me film box breaks and gives me products to give out... remember the autographed Stamkos puck? Yeah... he gave that out for free! If you haven't yet, check him out on Facebook and Twitter. Tracy Hackler at Panini is another person I have to thank for supporting the site. He's provided me with not only hockey products to review, but also some basketball and football as well. It's amazing that a company like Panini has people there who reach out to collectors like myself. It's definitely not common. Thanks Tracy for making Panini an awesome and friendly company!!!

11/12 Artifacts -
Artifacts has always been a great value-to-content product, this this year it really crammed in what collectors wanted. Autographs, patches, jerseys, tags, fight straps... they were all there and in various combinations. It was awesome seeing all the rare short-printed cards come out of people's boxes. Besides cards numbered 1/1... there were cards numbered /2, /3, /5... it was a real challenge for players collectors like myself. As for rookie card lovers... this was the year they put the autograph rookie redemption cards in. Those were some of the hottest cards of the early 11/12 collecting season. Click here for full review.

11/12 The Cup -
You can't really beat The Cup - it truly is the holy grail of hockey card collecting. Each and every year the card values (for the top cards) are the highest of any other product release from any company. It's also the most exciting product to open hands down. Just watch people bust the stuff... so many shaky hands!!! The RNH rookie numbered to 99 is one of the biggest pulls of the year. Oh, and did you know that Sidney Crosby and Mario Lemieux have a dual signed card in it? Oh, and there are Gretzky and Orr autos and patches... the list goes on and on... Click here for full review.

11/12 Titanium -
I have to be honest... it didn't look good on the sell sheet, but boy did it deliver! This funky shaped box with just a few packs within was a huge hobby favorite. Of course there were the sweet auto and patch cards to be found... but the most surprising draw were the true rookie cards with jersey number numbering. These cards contained no autograph or memorabilia. They were just serial numbered... but some were extremely limited. And collectors were buying and selling these cards at truly outrageous prices. Click here for full review.

11/12 Prime -
For the high-end Panini product I'd have to put Prime over Dominion... by just a hair! Dominion was great this year... but Prime gave collectors some amazing eye-popping cards. The Prime Colors gigantic patch cards were things of beauty. It was amazing how collectors (that have deep pockets) could potentially put together a huge patch by collecting all the pieces. Prime started out at $200 per pack, but since has dropped to around $160. At this price it's almost a no brainer to go out and get some of it! Click here for full review.

11/12 Captain-C
Of all the niche ITG products that came out this year, Captain-C had to have been the most broadly accepted product as it featured players from many teams. By putting the focus on team captains, ITG basically narrowed the field down to only players of a certain quality. For team collectors, this is great because the cards of your team's captain is always a nice addition. For general collectors, team captains tend to be players of note, so the incentive is high to buy the product. The sweetest cards in Captain-C have to the the pair of the actual captain's 'C' from the player's sweater that collectors could find within the product. The two cards can be put together for for the letter. Click here for full review.

11/12 Ultimate Memorabilia
The 11th edition of Ultimate Memorabilia did not disappoint. Each card comes encased in a graded card holder and is very limited in number. Some of the Ultimate patch and emblem cards are the most spectacular pieces to be found - rivaling even those found in Panini Prime. My only regret with this product was that I couldn't get too much of it. I remember buying one pack of it from dacardworld.com and pulling a hot pack - which was great... but made it hard for me to review the product. Thankfully, a Youtuber helped out out with a trade and I was able to get my hands on some non-hot pack cards for review. Click here for full review.


Most Disappointing Product of the Year

11/12 Panini Elite
I'm not sure what happened here... unlike Titanium, Elite looked like a real winner on the sell sheet. The cards were nice but the brand never really struck a chord with collectors. Elite may have suffered from a similarity to Certified... but without the variety of memorabilia rookie cards and parallels. The best cards from Elite were the Prime Numbers insert set. These super thick cards were done very nicely, but most people were only able to pull the standard jersey of the three card set. The final piece of the Prime Numbers featuring an autograph and patch was near impossible to get - that may have frustrated collectors. Click here for full review.


Most Under-appreciated Set of the Year

11/12 ITG Enforcers
ITG released this set early on in the year at around $90/box. It was a tough buy because the players featured within were of hockey tough guys rather than goalies or scoring super stars. This was ITG's most niche and risky product by far. Though I wasn't a huge fan of the product when it first came out, I now see it as a fun and unique buy. It's just so different than anything out there now. At this point in time, the price per box has significantly lowered to a price that I would say makes it worth it to buy. The Enforcers set also has emblem pieces found within that are just as incredible as those found in Ultimate Memorabilia... which is saying quite a bit! Click here for full review.

11/12 Panini Pinnacle
I know, I know... it's a strange category... but I wanted to included it to give Pinnacle it's due. We all know how spectacular Upper Deck Series 1 and 2 photos are... but Pinnacle is getting up there as well. That brand's photos are some of the most unique I have seen. The back of the card even has a description of what was going on in the photograph - and that is really cool. My suggestion for future Pinnacle releases would be to up the quality of the card so that the photograph is the star of the base card. Upper Deck's use of nice gloss and foil on a classy design is a real winner. If Pinnacle could adopt a similar base design, the photos would stand out even more. It could take out Upper Deck! But... we'll see... we'll see. Click here for full review.

And that's it! I hope you enjoyed this little look back at 2011-12! Let me know what you thought of the 11/12 collecting year! Tell me your favorites and the your opinion of how the hobby went last year. Best wishes for 2013! Hope you pull some awesome cards!