Oh no! It's SP Game Used! $180 for six packs of cards with dollar valued jerseys in them! Wait... that's not what SPGU is like this year! Upper Deck has heard the cry of hockey collectors around the world, and have revamped SPGU for the 12/13 season. The price of the product is cheaper, and with a lower print run... things are looking quite promising for this long running Upper Deck brand. 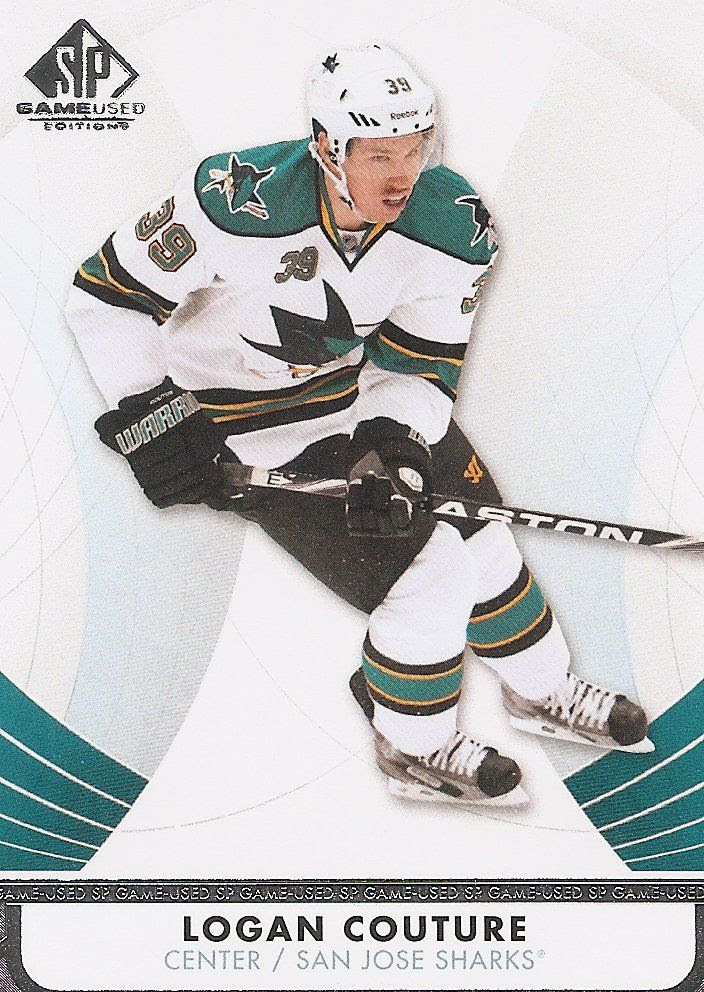 Base Card Design -
As part of the 'SP' family of products, the SPGU base cards have a SP Authentic-ish look to them. Generally speaking, they are clean, predominantly white, bright cards. For whatever reason though, the SPGU base cards tend to look a bit busier and less elegant than their SP Authentic brethren - and that's the case this year as well. These base cards feature a modern bright white background with geometric shapes. The team's colors create a 'winged' look towards the bottom of the card. I am a fan of matching card colors to team colors - it looks cool - except when a player that has been recently traded is shown in their former team's uniform. Case in point: Jaromir Jagr. If you get a chance, check that card out (card no. 72)... the Flyer's orange and white scheme clashes completely with the green highlights on the card. That aside, one part of the base card I really like is the bottom portion. Upper Deck uses a textured silver foil to enclose the area showing the player's name, position, and team. It really sticks out as a premium touch on these cards. 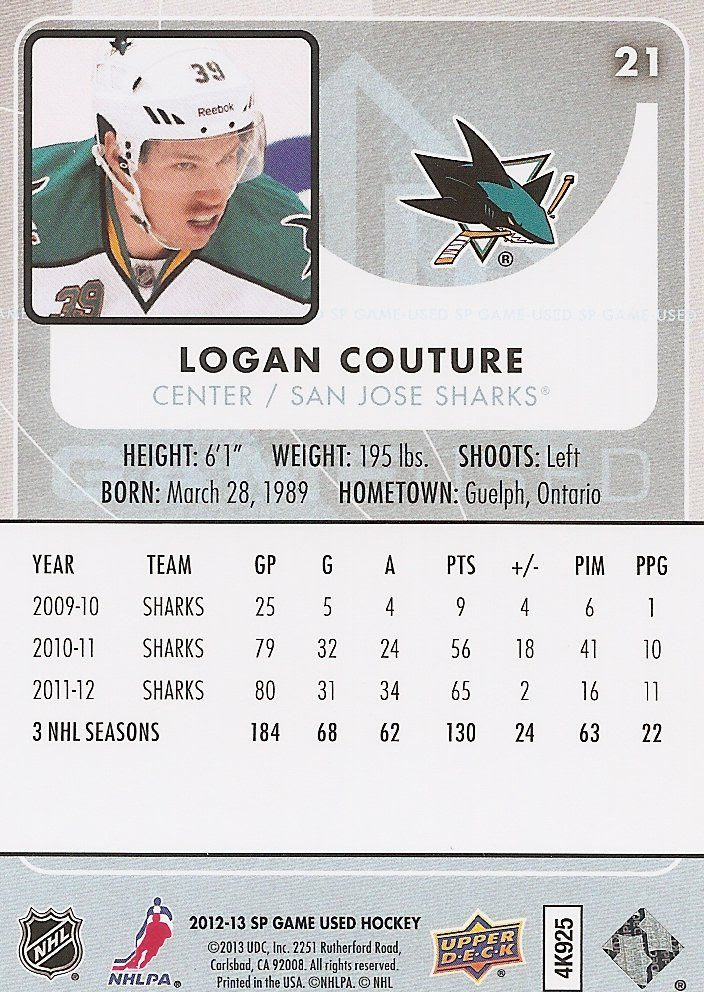 The back of the SPGU base cards are nothing to write home about. It has room enough for 5 years of stats and all the pertinent basic information that appears on just about every other trading card. Again, like the front, the back is clean... but there's nothing that really stands out about it. The same image on the front has been cropped and used for the back and there is no extra write-up of the player. It's just the back of a card... but Upper Deck could have put a bit more effort in here.

I did not pull a rookie card in my box of SPGU, but that might not be uncommon this year. Taking a cue from Panini's Titanium, rookies in SPGU this year are serial numbered to the player's jersey number. This interesting twist in rookie card numbering may cause quite a stir for SPGU this year. It'll be interesting to see how collectors react to this. Will they go nuts like they did for the Titanium rookies last year? We'll just have to see... but keep in mind that the rookies included in SPGU are the hold-over rookies from last year rather than the bigger names yet to skate.

Inserts/Game-Used/Autos -
Each box of SP Game Used will come with five packs... and in each pack there should be either an autograph or memorabilia card. The box states that there should be at least one autograph per box. Like last year, there are many different types of memorabilia available to find. 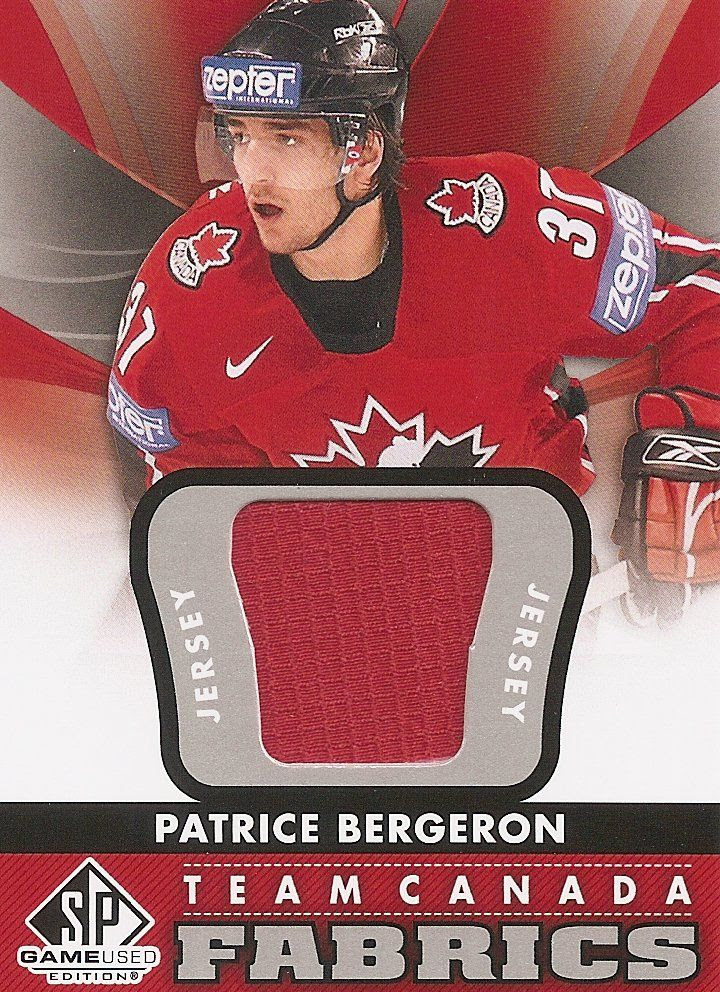 The standard jersey card in SPGU stands out quite a bit more than they did last year. These cards feature a fairly large image of the player above their game-used jersey swatch. I much prefer the larger image of the player to a smaller full body shot. The coordination of team colors to the background and borders is also a sweet touch. Though these cards are rarely valued at more than a few dollars, I enjoy the look of these cards enough to be happy with them in my collection. Upper Deck did a great job this year in making the look of these cards more bold and pleasing to the eye. 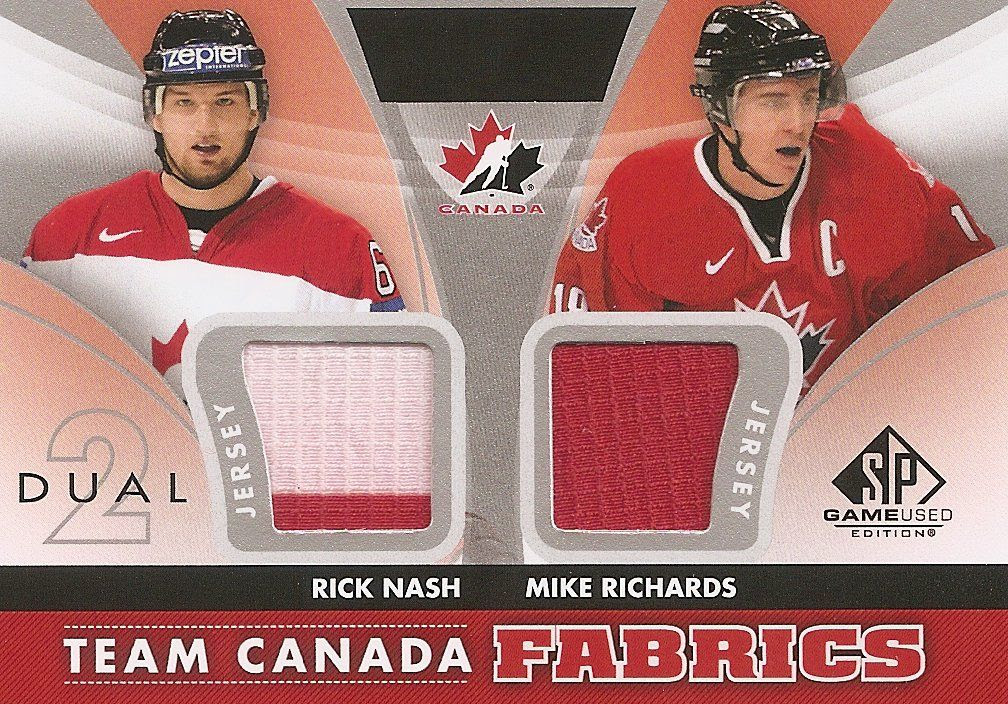 Multi-swatch memorabilia cards are nothing new in SPGU. Like the standard jersey card, these multi-swatch cards feature a sweet modern design. You can tell that the multi-swatch and single swatch cards are related intentionally. Collectors who go for sets of SPGU would really appreciate that. Interestingly, the card I pulled of Rick Nash and Mike Richards is not numbered. There is definitely a space at the top of the card for serial numbering, but this card doesn't have it. It makes me wonder if the original intent was to have numbering or not. According to the sell sheet these cards are unnumbered... but that big black spot at the top makes it seem like the card is missing something. That 'something' being numbering, of course! 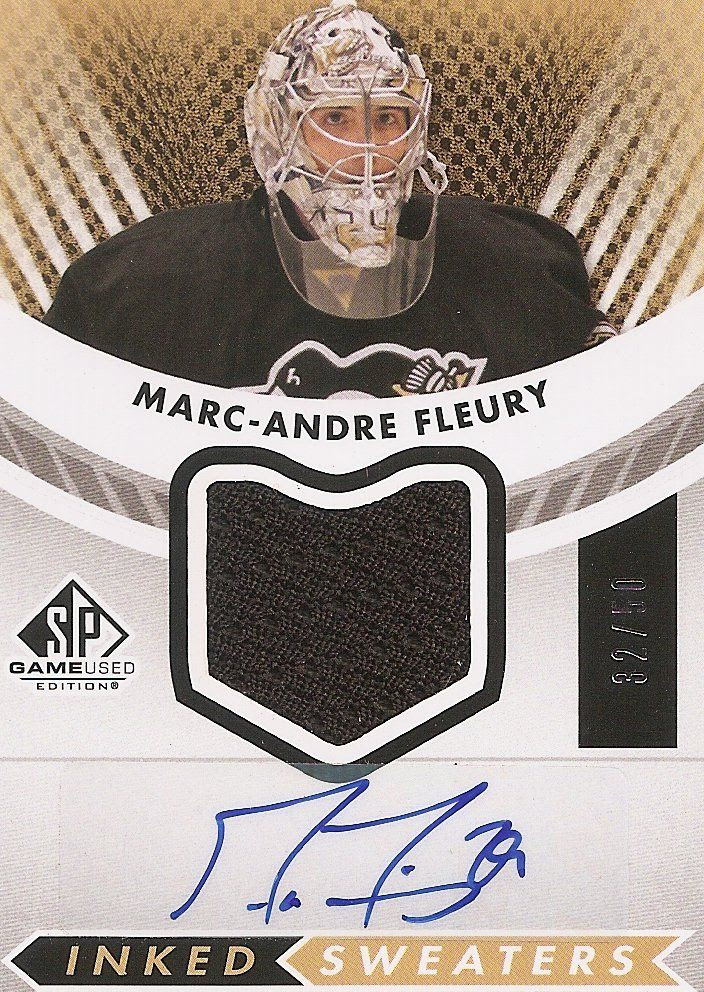 My autographed card was of Penguins star goalie Marc-Andre Fleury. I was happy to be able to pull a player I personally collect, but this design left me a bit wanting. I think the very small area for the player's image is what makes me enjoy the card less than I would have usually... it just feels cut off a bit. But other than that, I am happy with this card. Personally, I enjoy pulling established veteran stars over unproven scrub rookies, so this was very nice. The Inked Sweaters autographed jersey set features different numbering for different players. Some are numbered as high as 99 and some as low as to only 10. 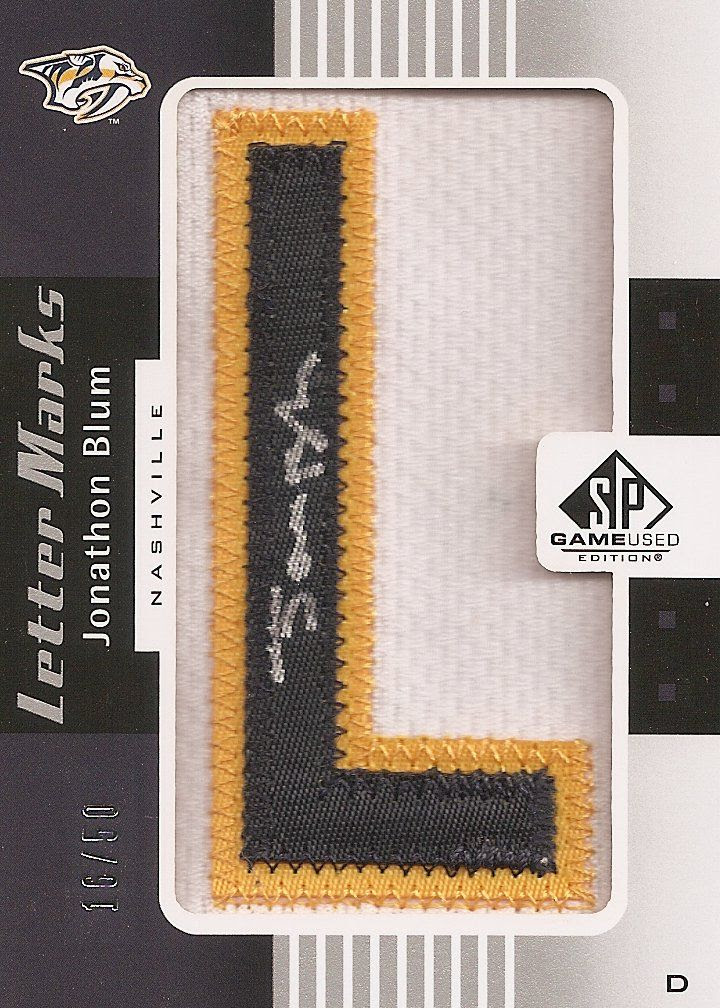 This Letter Marks card of Jonathon Blum I found in my box had to be a bonus auto hit. Occasionally Upper Deck will insert cards from the previous year that they were late in receiving back from players into new products as bonus hits. This Letter Mark was supposed to be in 11/12 SPGU, but I got it in my box. It was nice to pull out more than just the one guaranteed autograph from my box.

As usual, SPGU has a ton to offer in terms of memorabilia. Two of the new card types to be found this year are authentic Stanley Cup Finals net piece cards as well as NHL logo shields. Both of these should be exciting for collectors to find in their boxes. Fight straps, skates, gloves, sticks, and of course patches are other fun things to look for this year.

Overall Rating -
I have to say that Upper Deck has made some excellent choices in changing SP Game Used this year. Though there is one pack less per box than last year, there is also a very significant price change for the better. Rather than closer to $200 per box, this year's product is now near the $100 mark. Upper Deck has also publicly stated that this year's print run has been dramatically decreased due to the (now over) NHL lockout. So due to these factors, 12/13 Upper Deck Game Used looks to be a real winner.

Last year collectors complained at how watered down in jerseys the product was. I agreed. It was downright scary to buy a single pack of SPGU. Now, there is still a chance of pulling a single jersey card, but at least this year it won't cost as much... and I believe there are better chances at pulling nicer cards out.

Some might say that Upper Deck has copied Panini's Titanium's recipe for success. Well, that might be true... but hey! A good idea's a good idea. I'm glad Upper Deck decided to tweak SPGU in significant ways. It went from a product I would hesitate to recommend to one that I definitely would tell collectors to get a box of.

Check out a few box breaks of SPGU down below!