Black Friday for me this year meant ordering boxes to break! Well, I didn't go crazy and get a ton of stuff - one (crappy) box of 11/12 SP Authentic and 3 blasters... but for a total of under $100... it was a pretty good deal. Hopefully I'll do better with the blasters than with the SPA box. Today I'm starting with a product that was pretty short printed - 10/11 Upper Deck Series 2. Here we go! 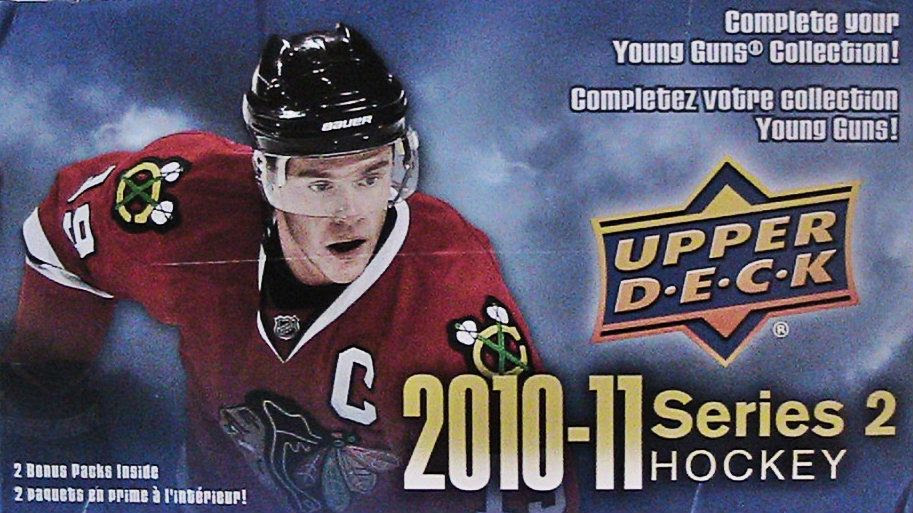 10/11 was a great year for hockey cards - there were many rookies that year worth chasing... Taylor Hall, Jordan Eberle, PK Subban, Jeff Skinner, Tyler Seguin, and even more! Usually, most of the year's best rookie cards are put into Upper Deck Series 1. And it was true of that year's product as well, however, while Hall, Eberle, Subban, and Skinner were inserted into Series 1, Tyler Seguin was put into Series 2. And guess what... he of all the top rookies that year has already won a Stanley Cup - the only one so far. So he's a pretty big draw in these boxes.

Upper Deck for whatever reason short printed 10/11 Series 2. I count myself lucky for purchasing three hobby boxes of the stuff when it came out. It has since risen in price by quite a bit. I definitely won't spend the outrageous amount it is now for a box. When I saw that blasters of it were on sale for only about ten bucks, I felt I had to take a stab at one. My hope is (obviously) for the Seguin Young Gun.

Of course, there are other great cards to find in 10/11 Series 2 besides that. Some of the rarer worthwhile inserts were the Team Canada, World Juniors, and Young Gun Retro cards, Victory Black parallel cards, and Rookie Materials jerseys. All of those are difficult pulls for sure.

Let's see if I am able to pull anything great out of this 10/11 UD Series 2 blaster:


Review -
Well, like many of the blasters I've been opening up recently, this one wasn't so great. I got a smattering of Victory cards, a retro variation, and my two young guns... but there wasn't anything I was particularly excited about. I guess my expectations were just a bit too high for this one.

One of my Young Gun rookie cards was of a player I was familiar with. He actually made the top spot in the break as you'll see a little further down. My other Young Gun was of Minnesota Wild rookie Jared Spurgeon. I have to admit I'd never heard of him before... but playing D and playing for the Wild aren't exactly encouraging things for a rookie value-wise.

Here are the top three cards from this 10/11 UD Series 2 blaster box: 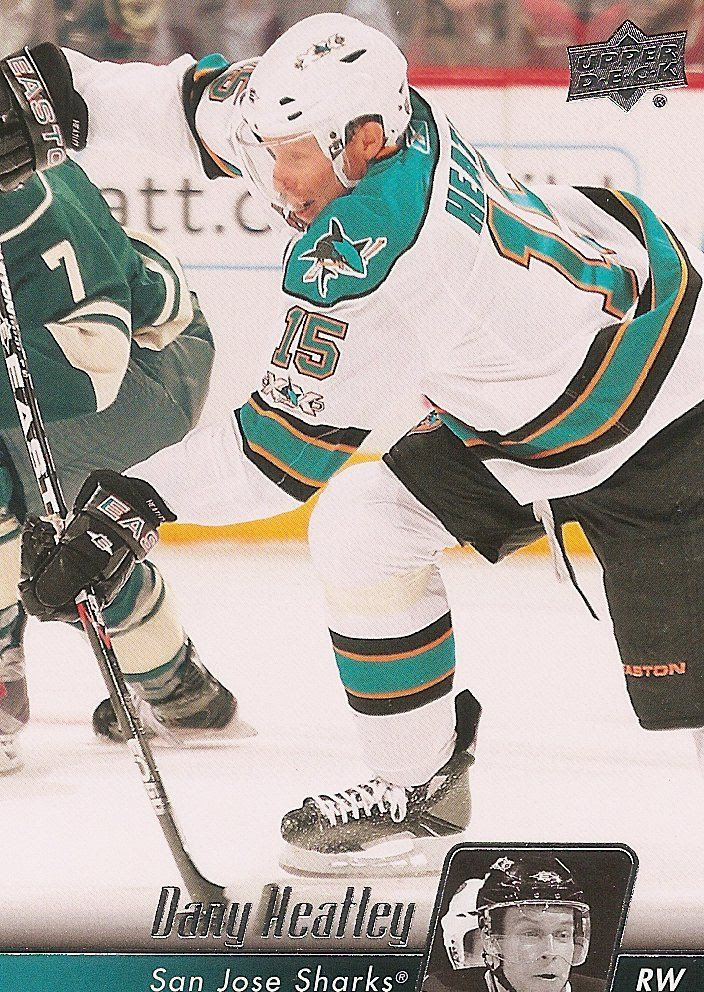 #3 - Dany Heatley Card No. 413
Ah, the Heater! Dany Heatley was a polarizing player for the Sharks. Some loved him and others not so much. It's probably because of his troubled past... but I always liked him. He was part of the team when I got back into collecting and I always enjoyed watching him play. He was on the sweet HTML (Heatley/Thornton/Marleau) line they had going. What a perfect name for a SJ line. It's always cool for me to pull a Heatley card with him in SJ gear. 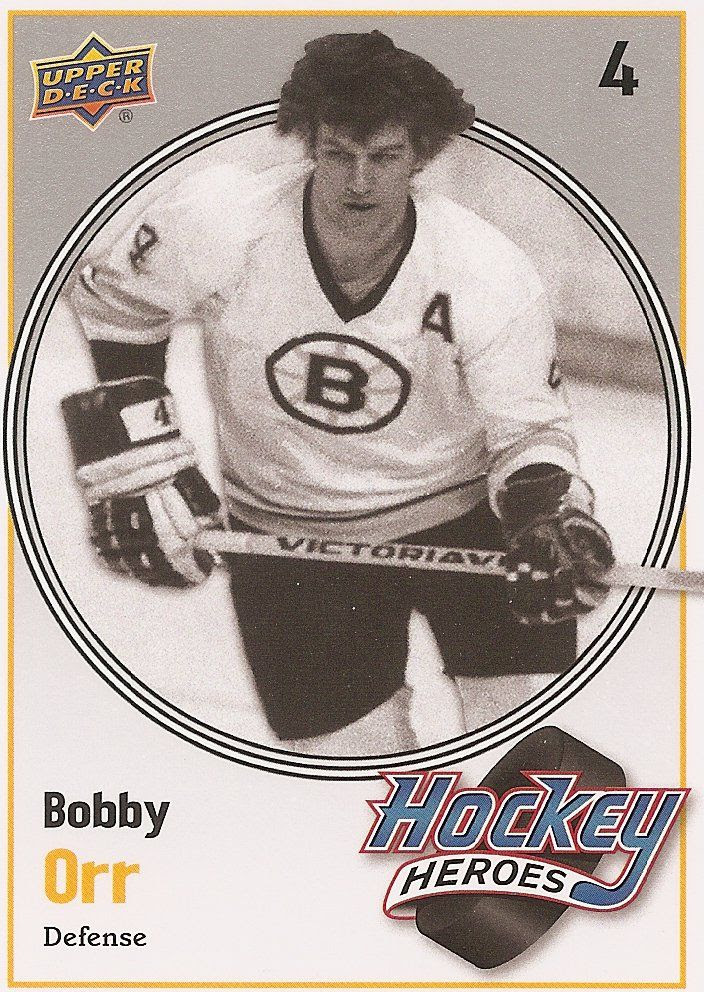 #2 - Bobby Orr Card No. HH13
Usually I'm not a fan of the Hockey Heroes insert cards... which tells you just how good I thought this break was... but it's Bobby Orr, and he was a legendary player so I had to include him here in the two hole. 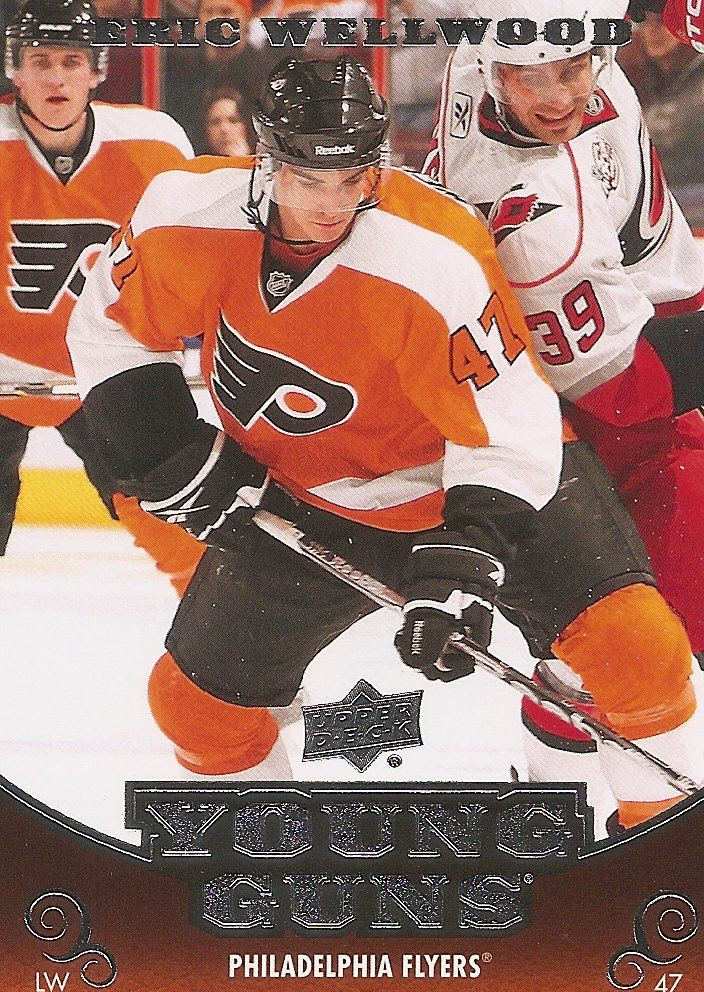 #1 - Eric Wellwood Card No. 487
Here's a Young Gun that is a known player... but not big value-wise. Wellwood played well in his OHL days with Windsor along with another pretty big name player *ahem* *Taylor Hall*. But with the Flyers he's had little playing time. Will he be able to gain success at the NHL level... well, for my sakes I hope he does now that I have his Series 2 Young Gun!

Overall Value -
I have to say that though this break wasn't good, I would still buy blasters of 10/11 Upper Deck Series 2 at ten dollars a pop. I had a Seguin Young Gun before, but I traded it away. I'd love to have one back! Besides that card there are some really awesome retro cards to find in UD2 as well.

I'm pretty sure the price of the blasters has gone back up, but I think I'll have to keep an eye on them for whenever they go back on sale.

Let me know what you thought of my 10/11 Upper Deck Series 2 blaster box down in the comments below. Have you ever gotten anything good from one of these? I'd love to know!

Every Sunday look out for another exciting installment of Retail Review!
Posted by luke. at 7:23 AM