Upper Deck released their long standing brand Black Diamond this week in all its textured foil-y goodness! Collectors have come to expect certain things from Black Diamond such as their diamond tiered base set, Rookie Gems, and multi-swatch jersey cards. This year Upper Deck delivers what Black Diamond fans look forward to every year with a few new tweaks to keep things interesting. Base Card Design -
The Black Diamond base cards are what we pretty much come to expect from this venerable brand. The cards are very thin and feature a textured foil background and finish. I've said this before, but I'll say it again... a Black Diamond base card can be difficult to differentiate from year to year. To me, Upper Deck is always able to retain the same feel of Black Diamond from year to year. In terms of brand constancy, Upper Deck nails it here... big time. For those who like things the way they are, it's probably a good thing, but for those who desire variance and fresh takes... Black Diamond can be a bit bland. But despite the sameness from year to year, the cards still look good. The players really pop off the card - it's almost a three-dimensional effect. It's definitely hard to see with the scan above, but in person the effect is noticeable. The graphics at the bottom of the card don't get in the way of the look of the card, in fact, it blends well into the overall aesthetic. 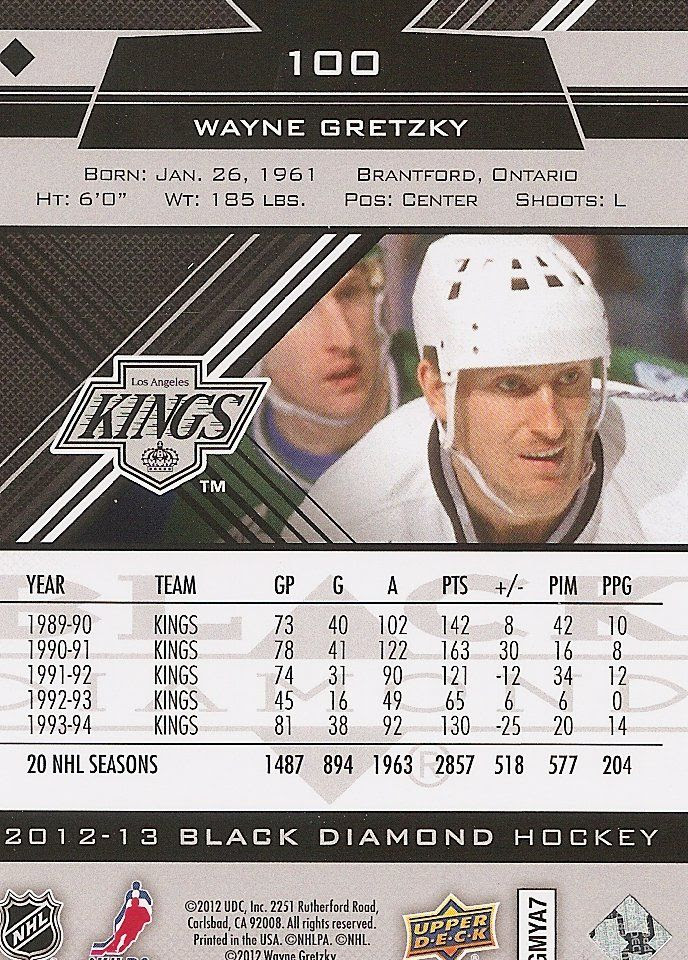 The back of the Black Diamond card is quite nice. There is a parallel design at the top of the card that matches the bottom of the front side. These little things always impress me. The backs have a 5-year span of the player's career as well as all the player's vitals. What I like most about the back, though, is the large close up image of the player that is included. It's the same image as on the front, but the close up view gives the illusion of a headshot photograph. It's a bold design choice that works well. 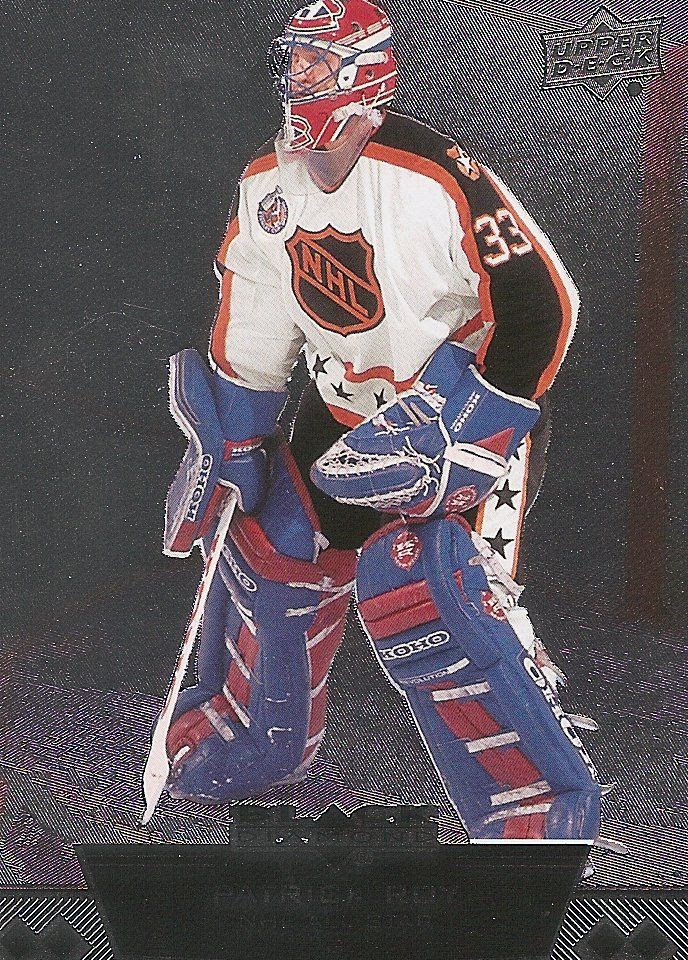 Black Diamond base cards come in different levels of rarity. The most common cards are the single diamonds. The Gretzky at the top of this review is a single diamond card. You'll notice that there is only one diamond shown at the bottom of the card. The back of the card also signifies it as a one diamond card on the upper left portion of it. Quad diamond cards are the most rare to get. These cards have all four diamonds present on the bottom of the card. Quad diamond cards show NHL players in their all-star uniforms. This is a repeat of what they did last year. In other past years, quad diamonds were reserved only for the biggest superstar names. Using all-stars as a theme is certainly interesting... I actually kind of like it as some of the all-star uniforms look really cool to me. I'm liking the giant old-school NHL shield logo Patrick Roy is sporting above! 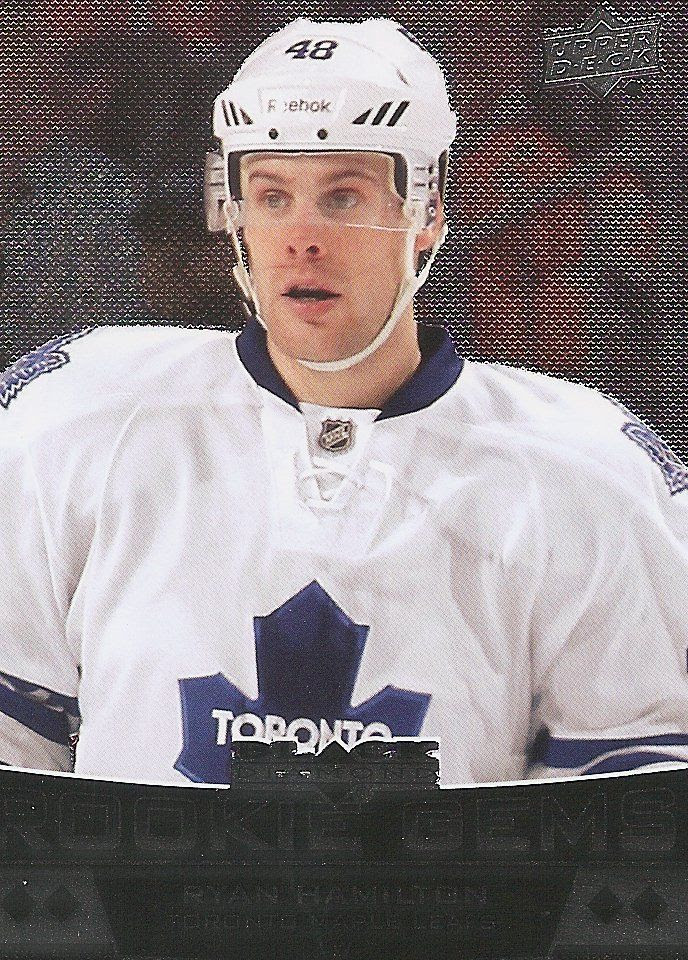 The Rookie Gems rookie cards are back this year. As usual, they come in both triple diamond and quad diamond varieties. You can expect to find a few triple diamonds and one quad diamond rookie per box. The Rookie Gem cards are well designed, very condition sensitive, cards. Though not as popular as other rookie cards in other brands (ahem - Young Guns), these cards always have a sweet design. My favorite aspect of these rookie cards are the close-up photos that they use on them. I feel this photo technique makes the rookies stand out from all the other base cards.

Inserts/Game-Used/Autos -
Each box of Black Diamond will come with a variety of hits along with the single, double, triple, and quad base cards. There is a guarantee of two multi swatch jersey cards, but it's the other inserts within boxes that I feel are more exciting to pull. Each box also will have an Upper Deck Ice bonus pack inside. 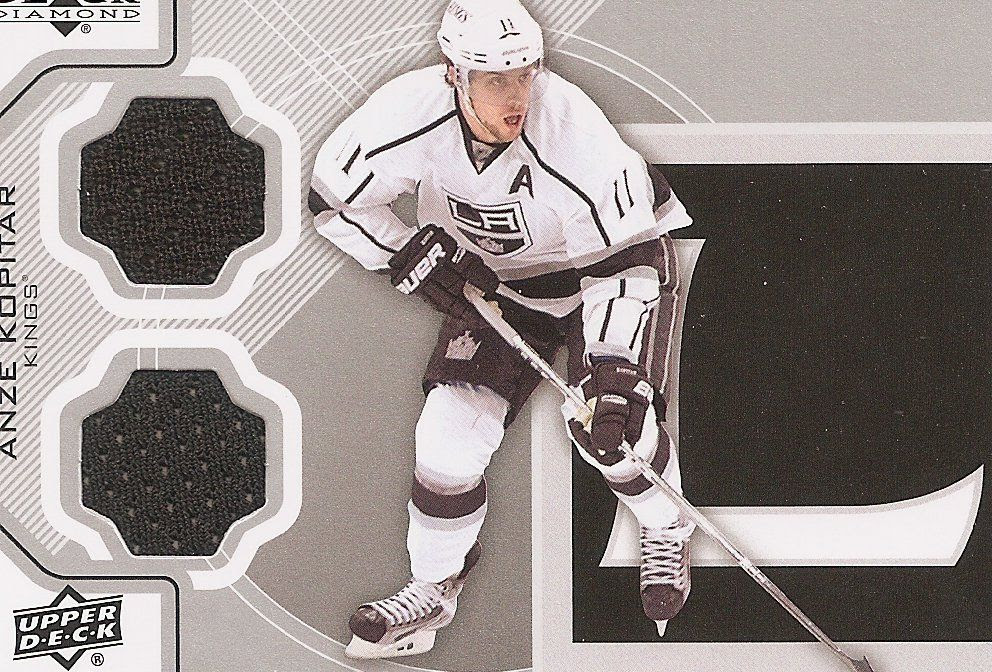 The multi-swatch jersey cards are back with the same basic design idea from last year. The jersey cards are actually puzzle pieces that can create a large logo when four from the same set are put together. You'll notice in the Anze Kopitar jersey card above the partial LA Kings logo. Though it's a fun idea, I don't find myself that excited about putting all the cards together. I think one reason for that is the difficulty in displaying a full set put together side-to-side as intended. There's just not a practical way to do it. And I don't think card protection companies like Ultra Pro would go out of their way to create a holder that would fit four cards next to each other like these cards were designed to do. 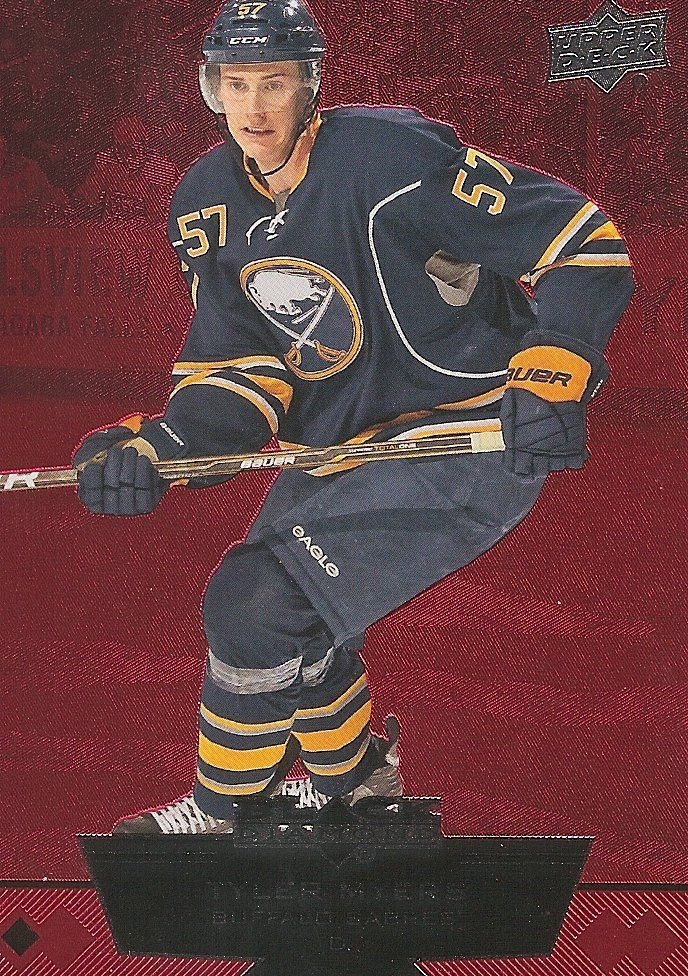 Regular set parallels like the Ruby cards are back again. The Ruby parallel cards are numbered to 100 and come, according to the box, 1:48 packs. In my box, and also in the store owner's as well, there were two. I heard a rumor that Upper Deck cut the production of Black Diamond this year, so it could be that getting inserts and parallel cards are easier. That could explain why we beat the odds on these cards. If so... that's pretty awesome... and it might be a good idea to pick up some boxes of Black Diamond post haste! 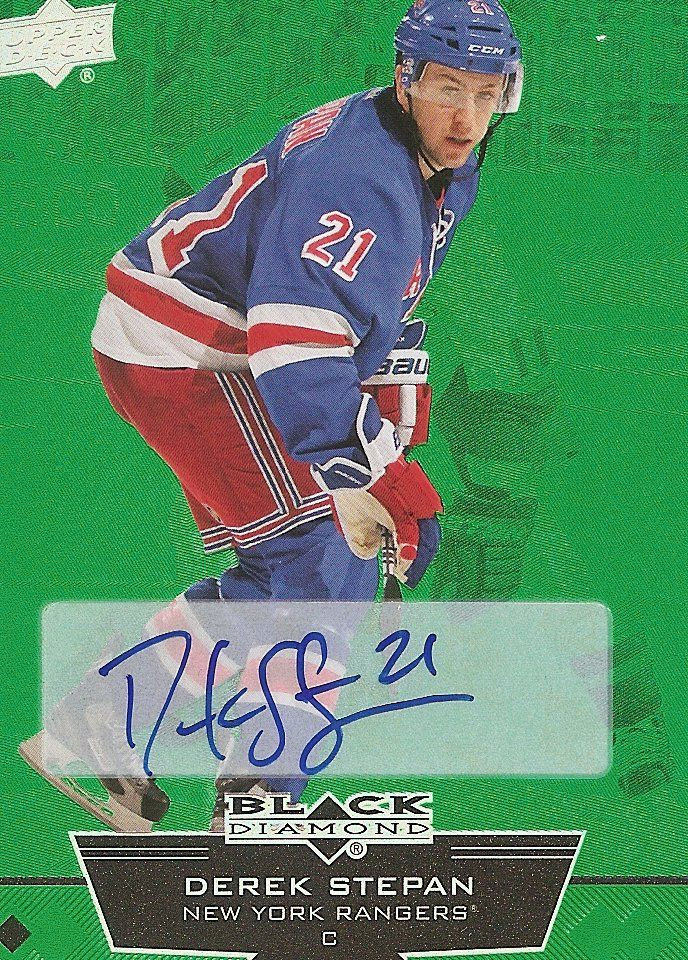 The nicest card I pulled in my box was this Emerald parallel autographed card of Derek Stepan. The card is serial numbered 5 of 10. I have to say that this card is amazing to look at. The green foil on it shimmers and shines in a very holographic way. It's really stunning to look at. I think collectors are going to love these base variations. 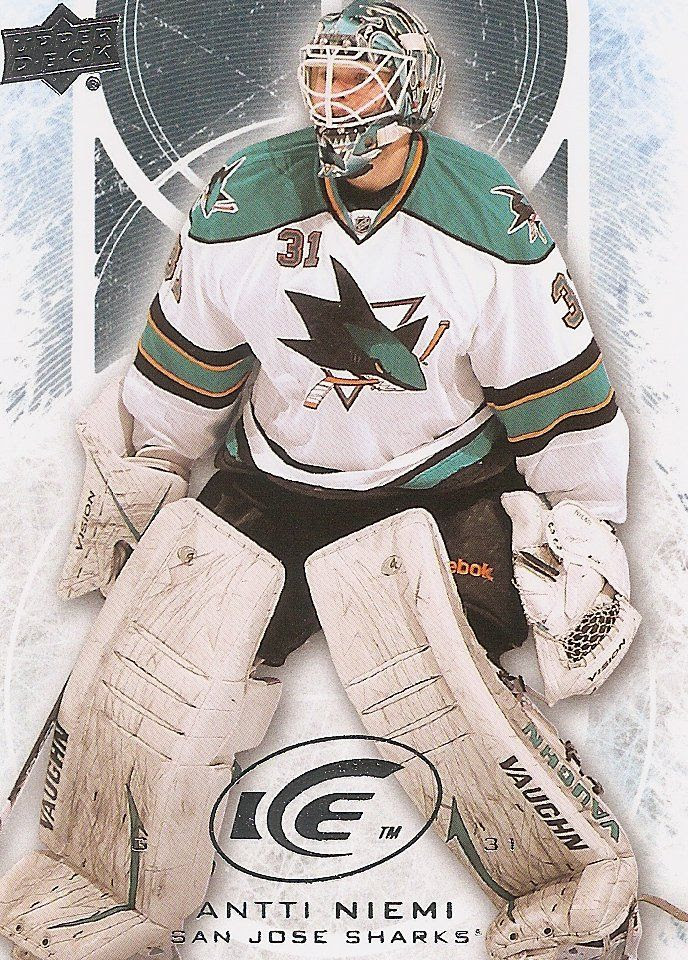 Aside from the Black Diamond cards, each box will contain a bonus pack of Ice. Just like last year, collectors will find a few ice base cards along with an acetate Ice Premiers rookie card. I was impressed with the Ice base cards last year, but this year's are leaving me a bit flat... and I mean that quite literally. Ice was known for having some sweet texturing on the card. This year Upper Deck has done away with that and have given collectors a simple, glossy base card. It's not bad looking, in fact, the card is a perfect continuation of the Ice line, but I think the quality here took a slip because of the lack of texturing - it just feels a little less premium and a bit more phoned in. 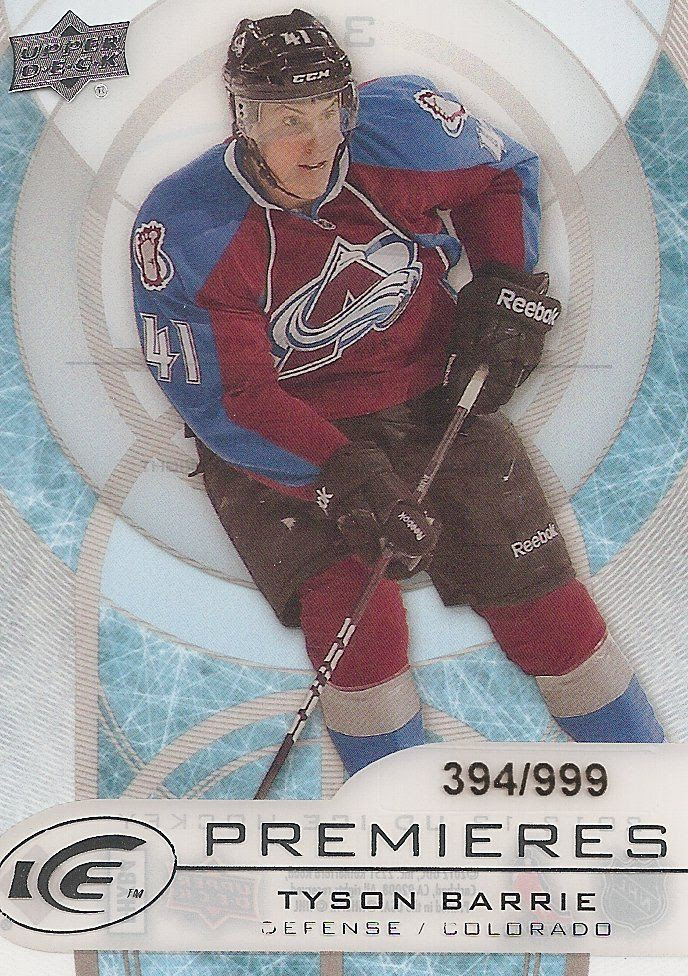 But wit all that being said... the Ice base cards were never the focus of collectors anyways. It's always about the Ice Premiers acetate rookie card. Though these cards are still nice, I'm not as big of a fan of them as I was for the pervious two years. It might be because there aren't any huge big-name rookies to pull... but that's just my feeling on them. It's funny how the lack of star names can hinder cards with nice designs.

Black Diamond has much more to find within than what I pulled from my box. Gemography autograph cards have returned as well as the Championship Rings and Hardware Heroes. Collectors will also be able to pull Lustrous Rookies and short printed autographs out of Black Diamond this year. Many of these inserts are tough pulls, but as I stated, they may be a bit easier this year if Upper Deck did indeed cut production of boxes.

Overall Rating -
Black Diamond has once again shown that it is a strong mid-level hockey product. Though the NHL lockout has put a damper on the rookie cards that can be found in Black Diamond this year, there is quite a bit of content to still enjoy. The emerald parallel cards in particular are especially stunning. And I am sure that collectors will once again get a kick out of finding the special Ring and Lustrous cards in Black Diamond.

At it's price point of around $90 for 24 packs, it's a pretty fun rip. I enjoyed going through all the cards I found in my box. If you've bought and enjoyed Black Diamond in the past, I am sure that you'll have the same experience this time around.

Black Diamond is what it is.

And collectors by now are very familiar with it. For myself, I would definitely purchase a box or two hoping to get more emerald autographs or a chance at an insert I haven't pulled yet.


Check out my box of Black Diamond from D&P Sportscards: