Now for something pretty different from the norm... a Panini retro themed hockey release! With the 12/13 hockey season currently stalled due to the lockout, a product like this is perfect - it takes away some of the current anger and pain of the labor dispute, and reminds us of some of the good 'ol times with players from hockey's past. Let's see what a box of Panini Classics Signatures provides us! 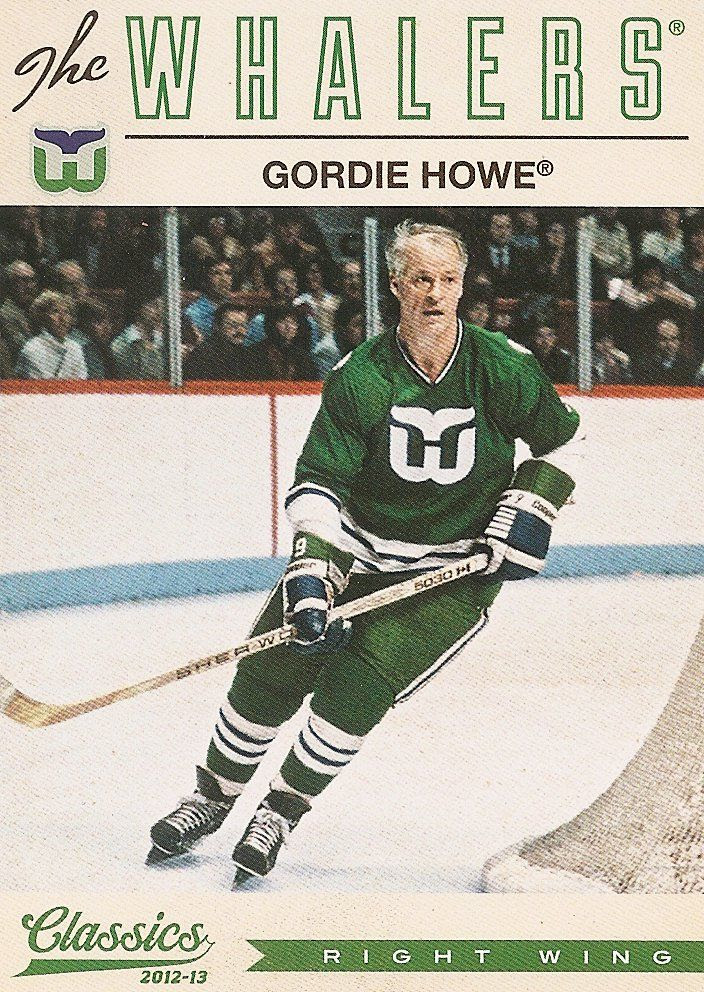 Base Card Design -
The Classic Signature base cards are meant to give off a retro feel - and they surely do that. The fonts and colors used on them have that 'classic' old-time look. To me, the cards don't feel old... and they don't mimic or give a nod to past products... but they instead take on a modern-retro design that is simple and pleasing. The card design actually makes me think of baseball more than it does hockey, but it still works and presents a look that is unique and different - which is a good thing for sure. Panini has used nice, crisp action shots of the former players. It's a fun set to look through - decades of hockey are represented here. 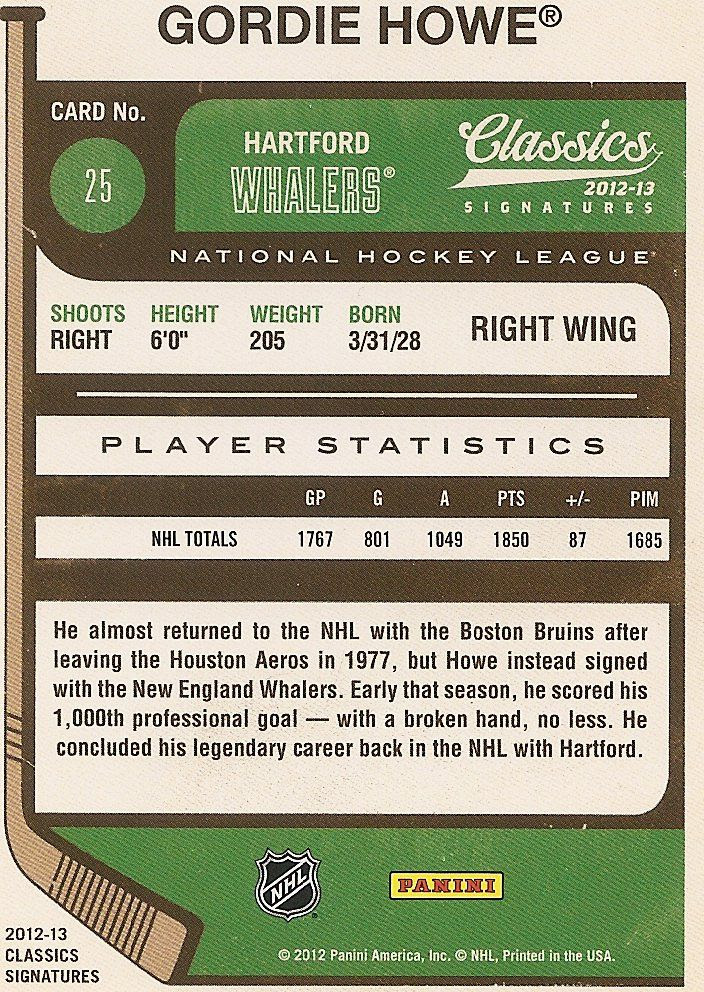 The back of the base card offers no photo and very little by way of stats. Instead, collectors are given a sum total stat line of the player's career as well as a short write-up. The retro-modern design is again apparent on the back. Just like the front, the back makes me think of baseball more than hockey. I guess it helps that there is a hockey stick graphic on the side of the card to help me remember what sport it is.

Inserts/Game-Used/Autos -
Each pack of Classics Signatures will have an autographed card and a die-cut Banner card. At about $180 per box (6 packs per box), that's $30 per pack/auto. There are chances to find single and multi-auto cards both numbered and unnumbered. There is no game-used content in this product. 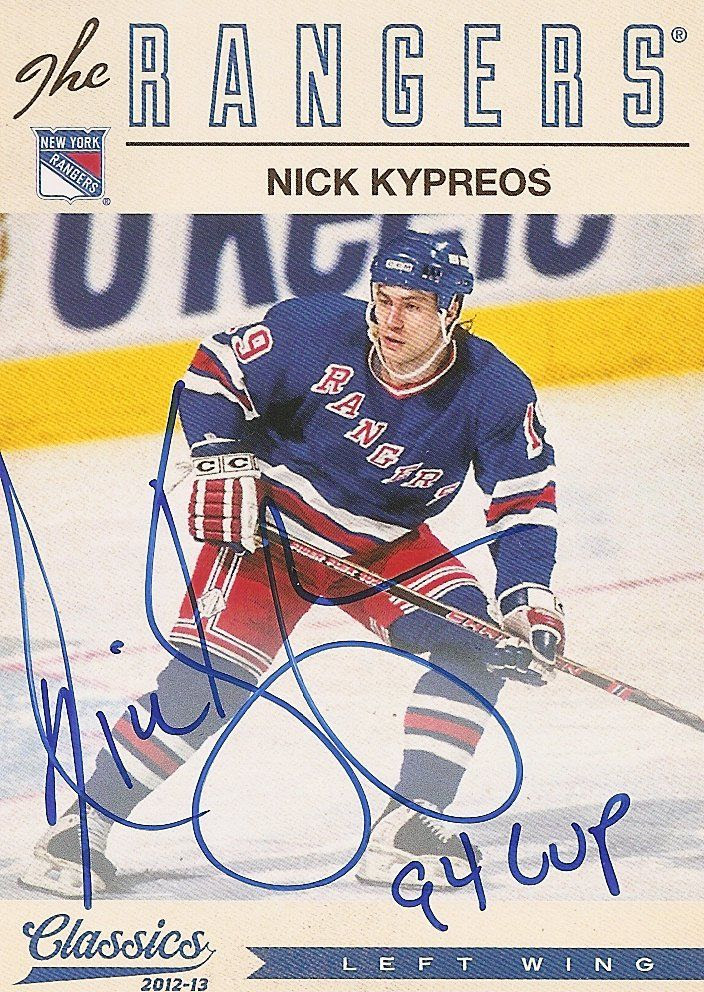 The standard autographed card in Classics looks the same as a base card. The only difference is the addition of the signature. Unlike many other products out in the market, these cards feature on-card autographs. And I have to say they look stunning in person. The blue ink that was chosen for the autos is bold and bright. The signatures really leap off the card. My favorite card from my box was this Nick Kypreos auto. I love how big he signed his name on the card as well as including the words '94 Cup' - sorry Nuck fans! I'm not sure if you can tell in the scan, but Panini has chosen to fade the lower half of the photo just a smidgen so that the autograph could stand out more. Very smart design decision! 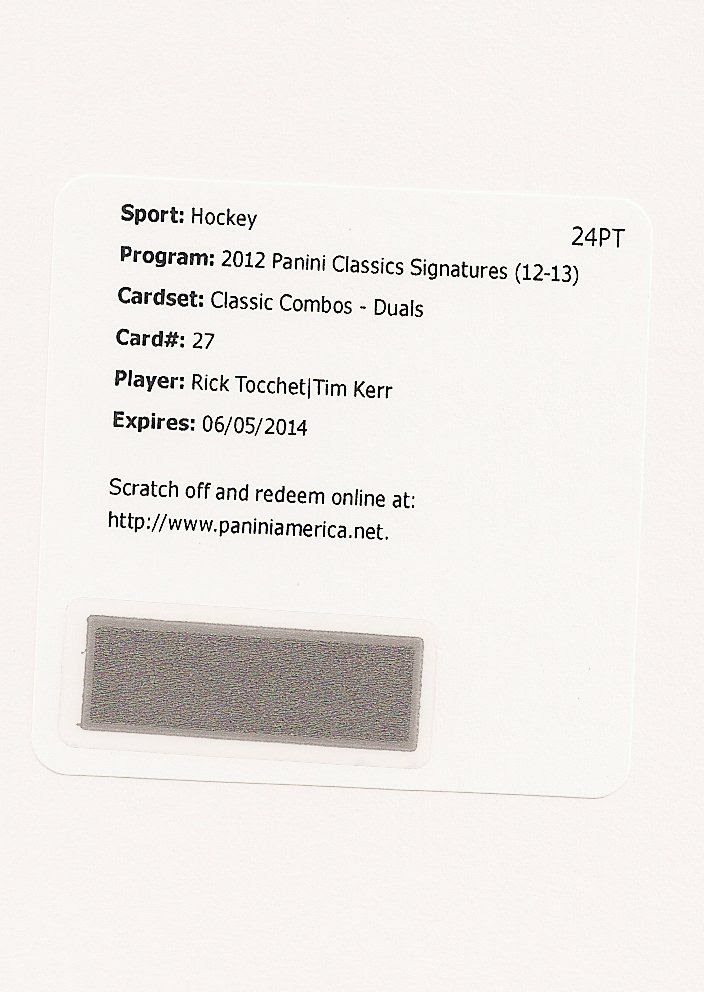 I did pull a multi-autographed card, but sadly it was in the form of a redemption card. I am very interested to see how this card will look in person. I'm not sure if a muli-auto card is guaranteed per box, but it felt nice to get one. 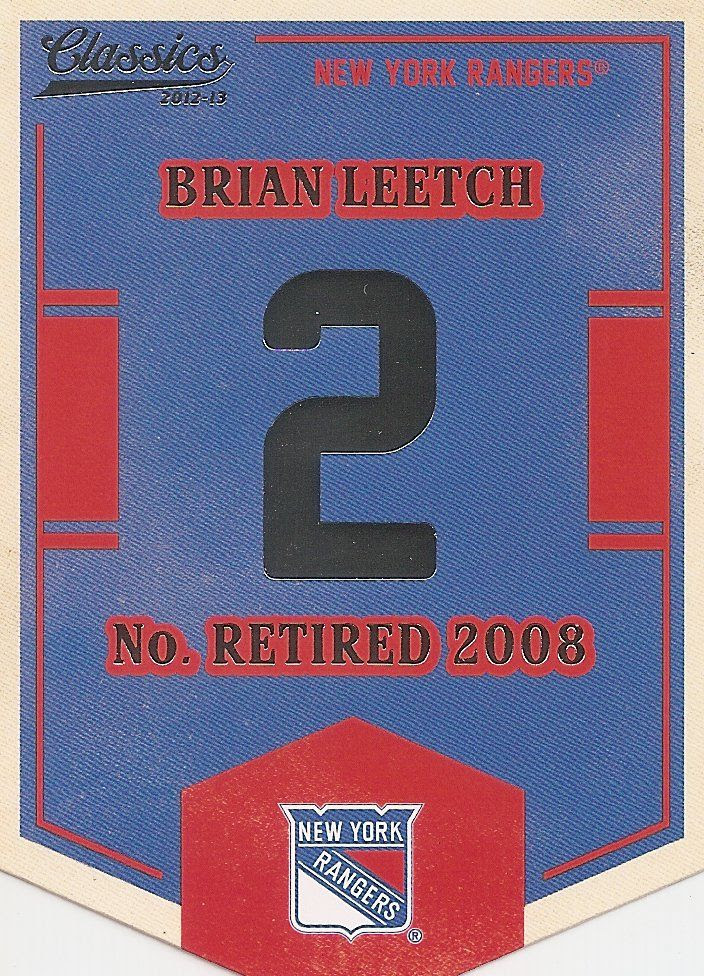 Besides the autographed content, each pack yielded a Banner card. These cards are die-cut in the shape of a retired number banner you might see hanging on the wall in an NHL stadium. I could definitely do without these cards. I've never been a fan of cards with no photograph on them... and the idea here sort of reminds me of something ITG would come up with. Since Panini doesn't have the same licensing restriction as ITG, I think they could have done these better... or just have not done them at all.

Classics Signatures has a variety of different autographed insert types to find. There are Social Signature cards that feature Twitter handles as well as Classic Lines, Classic Combos, and Inaugural Ink sets. Besides these themed cards, some of the base autographs have been short printed and super short printed. You can bank on the biggest names being the toughest pulls.

Overall Rating -
Panini Classics Signatures is a pretty sweet product. It's a great homage to the past. For collectors who remember and want to pick up some new cards of their old favorites, it's a great option with a nice, clean look. The on-card blue ink signatures are very well done... and as we all know, these older guys have much better sigs than the newer players.

At $180 a box, this product can be pretty restrictive though. The price may dissuade collectors who may not care for older players as much but are curious about them to hold off on a box purchase. Difficulty in finding big name stars may also be a hindrance as they are short printed.

All-in-all I do like Classic Signatures. I think a box of it is fun to open. I do remember most of the players I see coming out of the packs... and that makes for an enjoyable trip down memory lane. I wish the box were cheaper though - if it were, I think its score would be higher.


Check out my box of 12/13 Panini Classics Signatures: