Sadly, this week I ran out of stuff I had gotten from my online purchases, so I made the trek to the 'ol Target across the street in search of some cardboard. In terms of hockey, there was very slim pickings. My only option was to go with this blaster of Score. I was surprised that they had quite a few Score blasters on the shelf... maybe I'll be the one that buys them all. There has to be something good there... right? 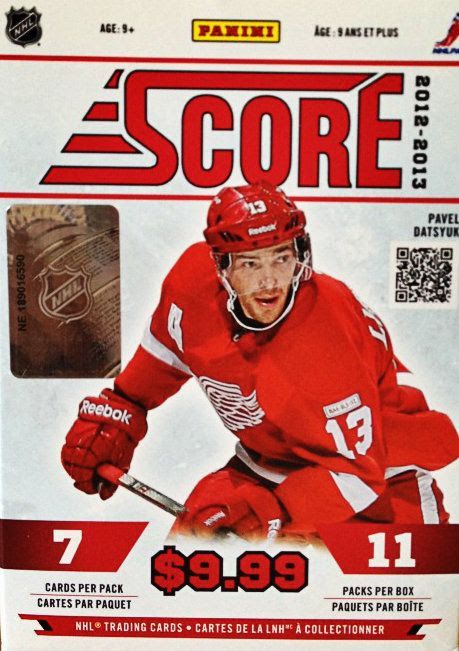 Like I've stated in previous 12/13 Score reviews and breaks, I am not particularly fond of this release. I've found the changes made to it to be lacking - like it has taken a step back in terms of quality, value, and perhaps most importantly... fun. Seeing as there is little to no other hockey products to buy in my local area, this'll have to be it until more stuff comes in the mail (which I hope is this week!). Usually my local Target will have the latest Upper Deck set in blaster form, but it wasn't there. I wonder if the lock out has caused retailers where hockey isn't popular to cut back or not put in orders for hockey. That would suck if that were the case as I'm in exactly one of those areas.

Well, thank goodness there's the internet and the ability to purchase stuff online!


Review -
As usual with Score, there are quite a few packs to open when buying a blaster. Though the cards don't have a huge retro feel to them, opening the packs do as the quality and quantity of cards you get is like opening up Score packs from the past. The cards have a plain, non-gloss finish to them and feature a simple, uncluttered design.

Just about each pack in the box contained both an insert card and a gold parallel card. I say 'just about' because there was one pack that only had a gold card in it. That pack left me a wanting - I mean... it was just a little sad to bust that pack and see all base and a gold card. Though inserts aren't big money cards, they do add variety when looking through the cards. It's almost as if they are expected to be there. So when a pack is less one insert, it does stand out a little.

As usual, with no NHL season as of yet, it was hard to gauge the rookie cards I got in the box. I'll just have to keep them and wait on them. In terms of gold cards though, I feel I got a decent amount of good ones. In such a big set with so many players, it's hard pulling out the stars. But I managed to get Mark Messier, Jonathan Quick, and Marian Gaborik amongst others. Not too bad.

Insert-wise, I have to say only one really stood out to me. For that one you'll have to scroll down and check out my top three. It got the number one slot!

See the top three cards from the Score blaster box: 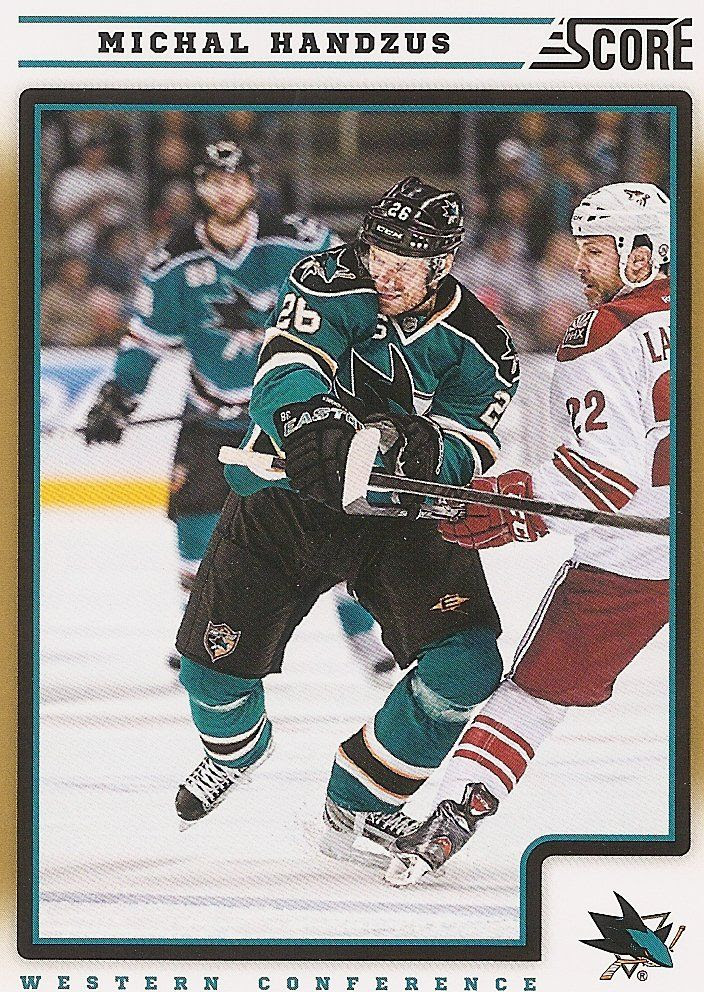 #3 - Michal Handzus Card No. 395 (Gold Parallel)
Like I mentioned in my write-up, I felt like I received some nice gold cards in my break, but this is the one I like the most as it's a PC card that will join my collection of Sharks. As Handzus is a new Shark, there aren't a ton of his cards yet that show him in his new teal colors so adding this one is nice. If you look at the photo, you can see Brent Burns who came over with Handzus from the Wild. What a coincidence! 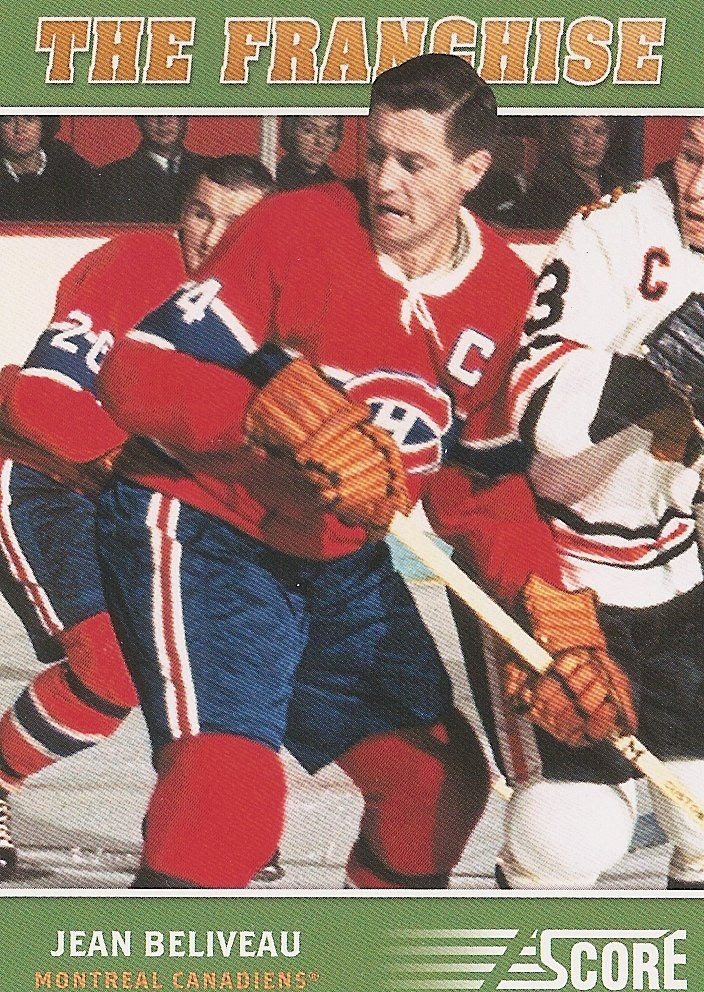 #2 - Jean Beliveau Card No. OS4
I wasn't sure what to pick for this spot, it really could have gone to a number of cards, but I chose this one of Jean Beliveau because of the nice vintage photo. It's cool seeing the old uniforms and the players without helmets on. I particularly like how Beliveau's head pops out in front of the 'The Franchise' logo giving the card a three dimensional effect. 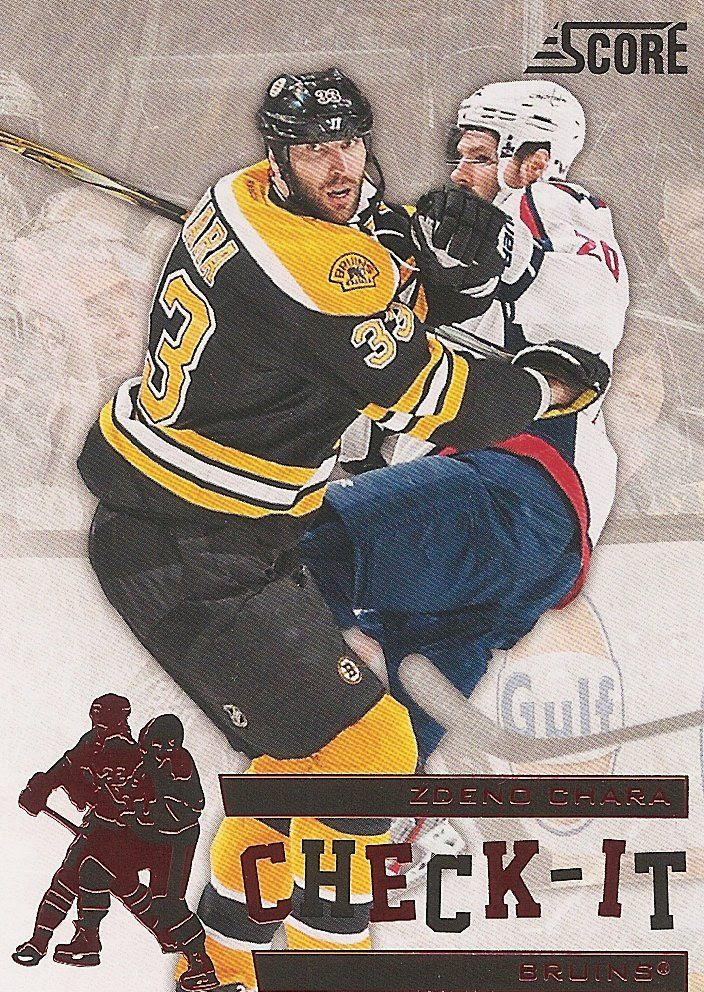 #1 - Zdeno Chara Card No. C2
This was my no-brainer choice for best card out of the blaster. Though I'm not a Chara fan, I am a fan of Score Check-it insert cards. Maybe I'm just mesmerized by all the shiny stuff on a Score card. But you know what? It looks great! If more Score inserts were like this one, I may have liked Score a lot more. So many things work about this card. First, the theme of the insert is perfect for hockey. Second, the photo and graphics are well thought out, and thirdly, the red foil just elevates the card.

Overall Value -
Just like my other Score blaster opening experience (Retail Review #18), this one wasn't so great. Though I did like the Check It card, that was about it. I'll only open more of these Score blasters if I'm completely desperate to opening up some packs.

I am curious if the other Score blasters left at my local Target have anything inside... I wonder how long and how many blasters it would take before I pull an auto... or even a black ice parallel. You'll see if curiosity has gotten the better of me if you see another 12/13 Score blaster break I guess!

Let me know what you thought of my 12/13 Score blaster box down in the comments below. Have you ever gotten anything good from one of these? I'd love to know!

Every Sunday look out for another exciting installment of Retail Review!
Posted by luke. at 6:44 AM