This week I've got another Pinnacle blaster to open. Last week I had fun opening up a 10/11 box, now I get to try the 11/12 version. This blaster was a little pricier than some of the blasters I've opened in recent Retail Reviews... but it's also one of the newer ones. And this blaster states that there is a guaranteed auto or memorabilia card inside. Very nice! Can't wait to see what I pull. Here we go! 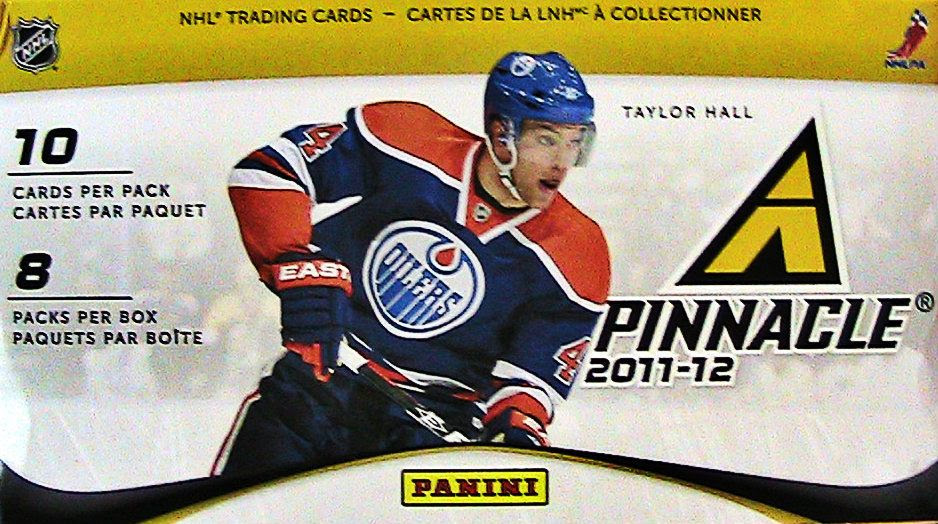 Unlike Donruss, the folks at Panini decided to bring the Pinnacle brand back for a second year. And like Panini, I've brought back Pinnacle for a second go around in Retail Review! While there were some definite positives in 10/11 Pinnacle, I did feel that it was lacking... especially in the base card design. I can say with confidence that Panini addressed some of these issues and came back with a much stronger product. Overall, the cards look better and the insert cards, too, are more desirable.

Stated on the front of the blaster is a guarantee of one hit. This is really cool because though I thought 2010 Panini blasters had hits in them, I was never sure of it. By adding a statement like that, it gives collectors some peace of mind in knowing that there will be something to look forward to when opening the packs. One thing that often scares me away from blasters is the fear of getting a pile of base cards. That guarantee puts my mind at ease and makes me want to buy these blasters because I perceive that there will be value in them.


Review -
This blaster was a blast (get it... blast... blaster... ahaha... ehhhh) to open. And it was the base cards that made it so. Panini chose to put in unique pictures of the players both on and off the ice. There were photos of players out of uniform, warming up, receiving awards, signing autographs, as well as some great action photos. Like with Upper Deck Series 1 and 2, collectors can have a lot of fun just going through these cards. I love this aspect of Pinnacle.

In terms of inserts, I received something in 6 of the 8 packs. Most of the insert card were cool. The only one that was a little disappointing was the Corey Perry Breakthrough card. First... well... it's Corey Perry of the Ducks... BOOOOO. And second, the card is lackluster in both design and concept. If these cards were foil or made out of acetate, that would be one thing. Plain stock with this design makes for a dud of a card type.

I found two Nufex foil cards in my packs - one rookie and one veteran. I had forgotten that the rookies this year were all given the special foil treatment. They look great - much beter than that putrid Ice-Breakers logo from 10/11. My veteran Nufex card was a bit of a surprise. I think Panini only inserted one veteran Nufex card per hobby box, so these cards may be a bit more rare than their rookie counterparts.

Here are my top three cards from the Pinnacle blaster box: 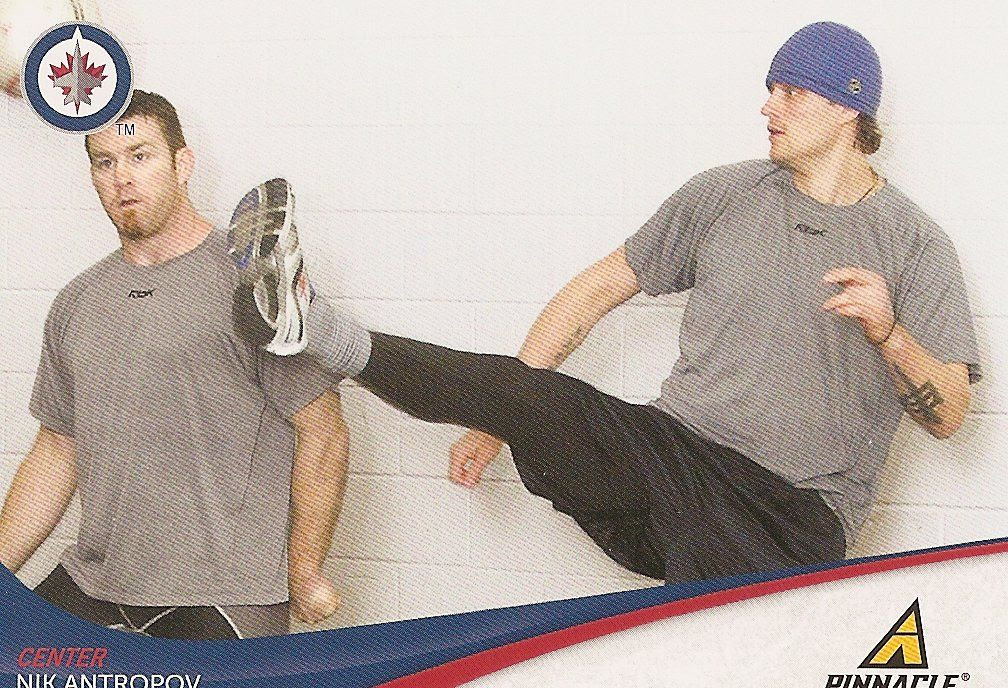 #3 - Nik Antropov Card No. 80
I actually chose this card to represent all the sweet base cards in Pinnacle. Like I mentioned before, this set of cards is just plain fun to look at. There are serious action shots, historical moments... and then cards like this that are just a bit silly. I looks like Nik is doing a karate kick here. Too bad you can see the soccer ball right behind the Jets logo... otherwise it would look as if he were really doing some martial arts. 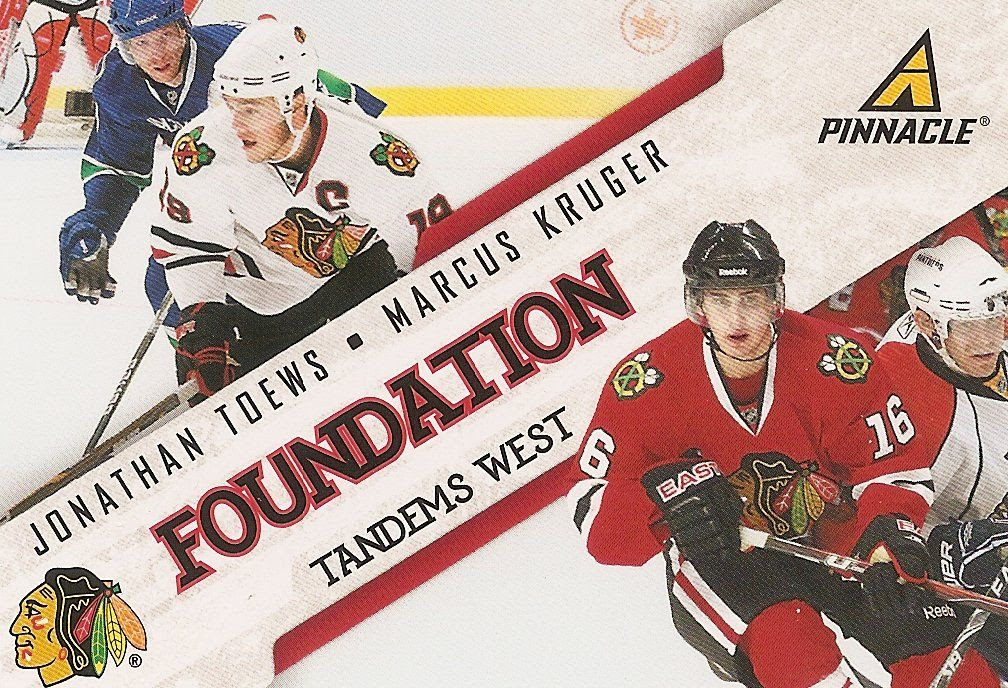 #2 - Jonathan Toews/Marcus Kruger Card No. 2 (Foundation Insert)
These Foundation cards can only be found in retail Pinnacle products. I remember having to find a Logan Couture/Joe Thornton Foundation card on eBay for my PC. These cards have an eerily similar look to The Path to the Cup inserts found in 12/13 Certified. It's definitely not exactly the same... but it's close enough. My thought is that whoever designed these cards really liked the design but they didn't get enough exposure being retail only in Pinnacle so they did it again in Certified. Just a guess. 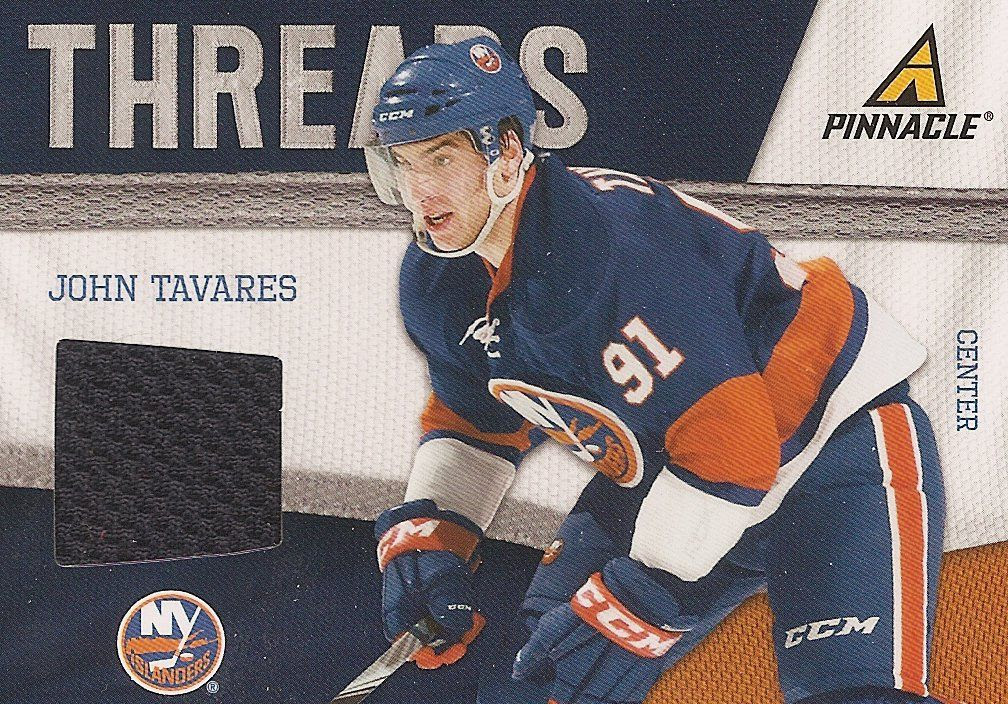 #1 - John Tavares Card No. 10 (Threads Insert)
I was really expecting a scrub player in my blaster, so I was very pleasantly surprised when Johnny-T came out of my last pack. Though this is just the generic jersey card in Pinnacle, at least it's of a great player. In the years since his rookie debut, the Islanders have struggled. Tavares' values may drop because of where he plays... and that's unfortunate... but this is a nice hit nonetheless. Great for a blaster.

Overall Value -
Pinnacle is starting to win me over. I really enjoyed the cards in my blaster and would not be opposed to go for some more given the chance. The cards look great, rookie cards are given special treatment, and there are some cool inserts to be found.

Given a choice, I would certainly choose 11/12 pinnacle over 10/11. It's just superior product. I'm curious if Panini will chose to bring Pinnacle back for it's third year. I would say that it would be a smart choice after seeing the growth it has made. Maybe one day it will catch up to Upper Deck Series 1 and 2 - that's it's biggest competitor at the moment. We'll see!

Let me know what you thought of my 11/12 Pinnacle blaster box down in the comments below. Have you ever gotten anything good from one of these? I'd love to know!

Every Sunday look out for another exciting installment of Retail Review!
Posted by luke. at 8:31 AM