This week I'll be opening up a blaster of 10/11 Panini Pinnacle. Back in the day, Pinnacle was one of the upper-end brands. This iteration isn't quite so lofty. Panini did try some unique ideas in this product though - some were really great while others were... well... not so much. I haven't opened this product in a while so I'm excited to see what this blaster will bring me! 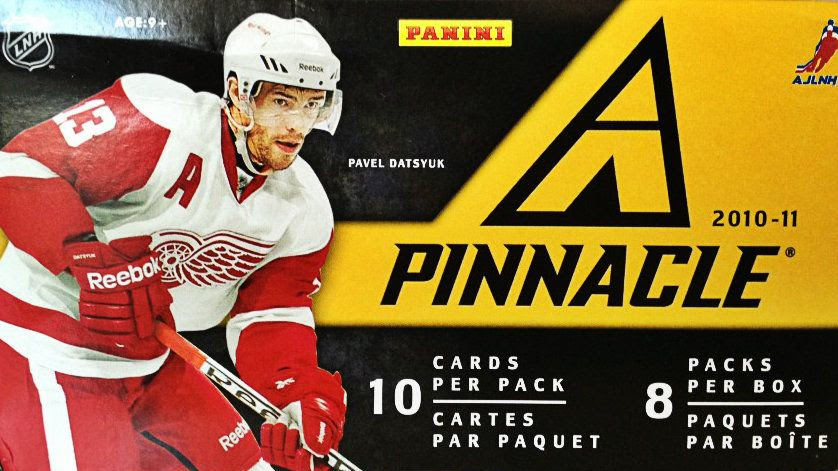 After opening up a string of Upper Deck blaster boxes, it's nice to bust into a few Panini ones. I've found that Panini has made the chance of getting a 'hit' easier in their blasters. More hits in the blasters means more value in them - and I'm all for that! Though the hits may not be the biggest and best patches, I think standard jersey cards are very appropriate for retail level products. For non-collectors just curious to check out a box of cards, these make for an exciting pull.

Similarly to last week's box of Donruss, Pinnacle has a wide variety of insert cards to find. Though there are not the cool acetate cards here, there are sweet looking Nu-fex foil cards. These Nu-fex cards were special and unique as parallel cards in the 90s found within Pinnacle baseball packs, but not so much now. It's too bad collectors aren't as interested in these card variants as they were all those years ago. They look stunning. It would be so cool if collectors still chased them and if they still held some significant value.

In terms of rookie cards, Pinnacle has their Ice Breakers rookie subset. I guess these are supposed to be like Young Guns, but they fail in that they are ugly. If find that Panini really dropped the ball with these cards. It's the one thing I'd re-do if I were in Panini's shoes.


Review -
The blaster break was decently satisfying. I got quite a few cards and a sprinkling of special insert cards within my box. It was fun to recall that Pinnacle took a different approach to the card backs. Instead of a full spread of hockey stats, the back is a written paragraph about the image on the front. Kudos to Panini for thinking outside the box with that idea. It's definitely something I appreciate, I love it when companies try out different things.

As I expected, I was disappointed with the rookie cards. Not only did I not get any of the big names from 10/11, I was even more unhappy than I initially thought about the Ice Breakers rookie card design. The Ice Breakers logo looks as if almost no thought went into it. Panini could have really made Pinnacle a great rookie card brand if they did these cards right since the price point is on par with Upper Deck Series 1 and 2... but these cards just fall way too short to even be compared with Upper Deck's awesome Young Guns series.

And I'll mention one more thing that made my blaster break a little awkward... the base cards were every which way as I looked through the packs. Not sure what machine packed these cards, but it needed some reprogramming on that day for sure. I know this isn't truly 'bad', but it was a little pet peeve I found a bit annoying as I was looking through the cards.

On a more positive note, I was extremely happy to get a hit out of this blaster. The City Lights insert cards are very pleasing, and I'm glad I was able to pull one from this blaster.

Here are my top three cards from the Pinnacle blaster box: 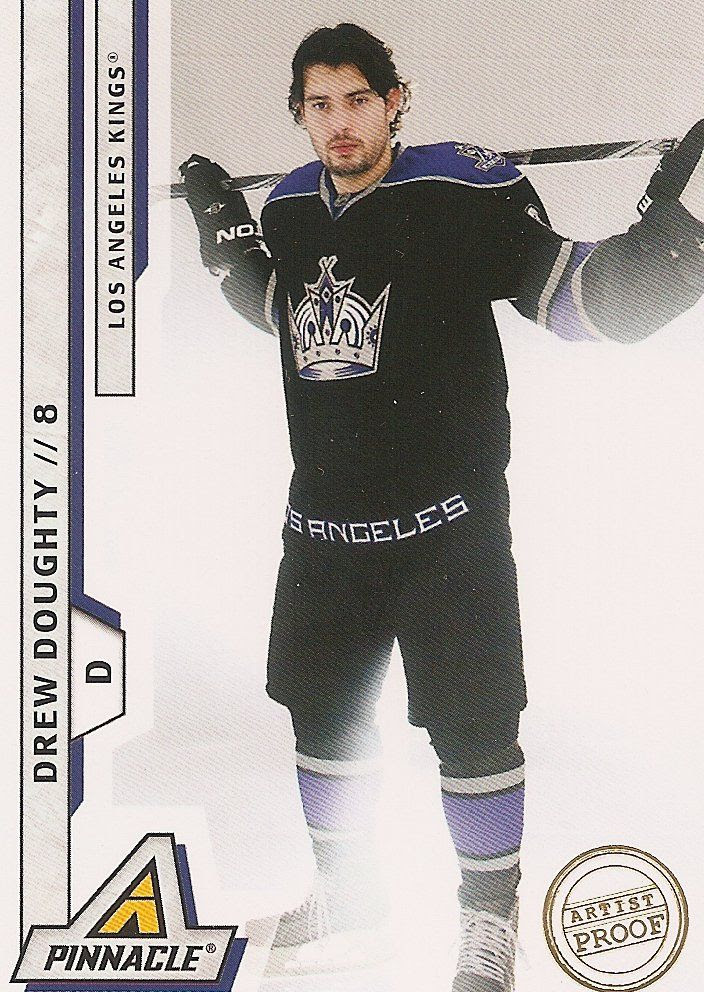 #3 - Drew Doughty Card No. 110 (Artist Proof)
I always found it strange that Artist Proof cards were more rare than their foil Nu-fex parallel cousins. While the Nu-fex parallels are in shimmering glory, the Artist Proofs just have a small stamp to signify what they are. In my mind, the cooler looking card should be the tougher one to pull. But anyways, off my soap box, it was nice to get an Artist Proof of a pretty good player. As you know, I love pulling parallels of noteworthy players... and Doughty is definitely a noteworthy defenseman. 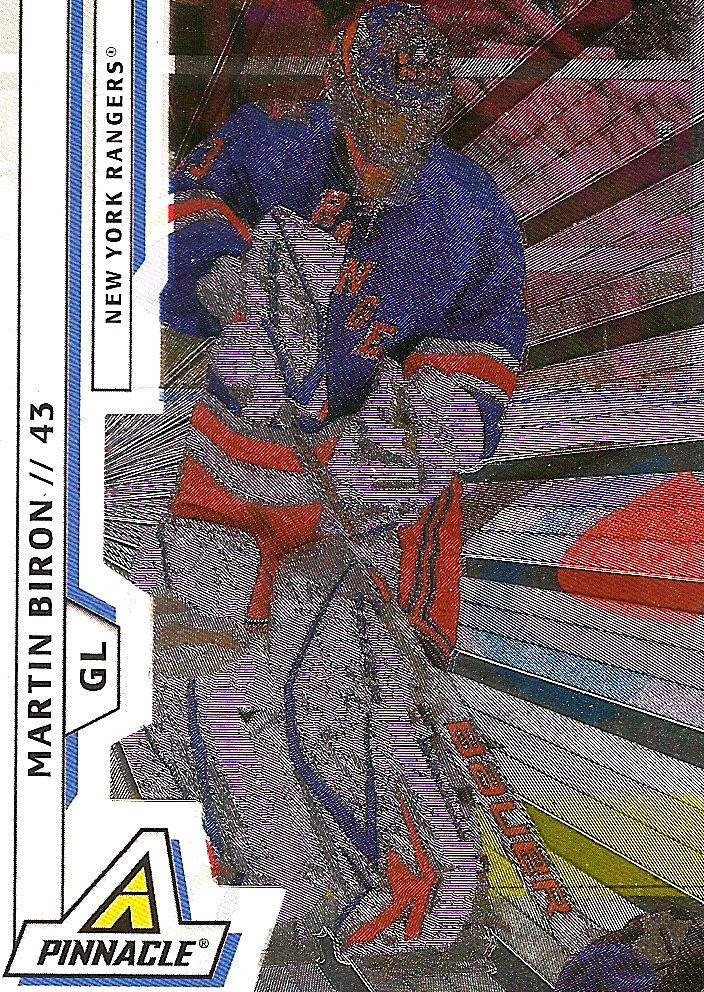 #2 - Martin Biron Card No. 71 (Nu-Fex)
Though Biron is not a superstar, I like this card for a couple reasons... and that's why it's top card number two! The first reason is that it was my only Nu-Fex card in the break, and I'm a sucker for Nu-Fex. Nope, they don't scan well, but in person they are dazzling. The second reason is for the picture. In the photo, Biron is using his stick to pile up hats from a hat trick by Marian Gaborik. It's a unique image that card companies tend not to use - very unique! 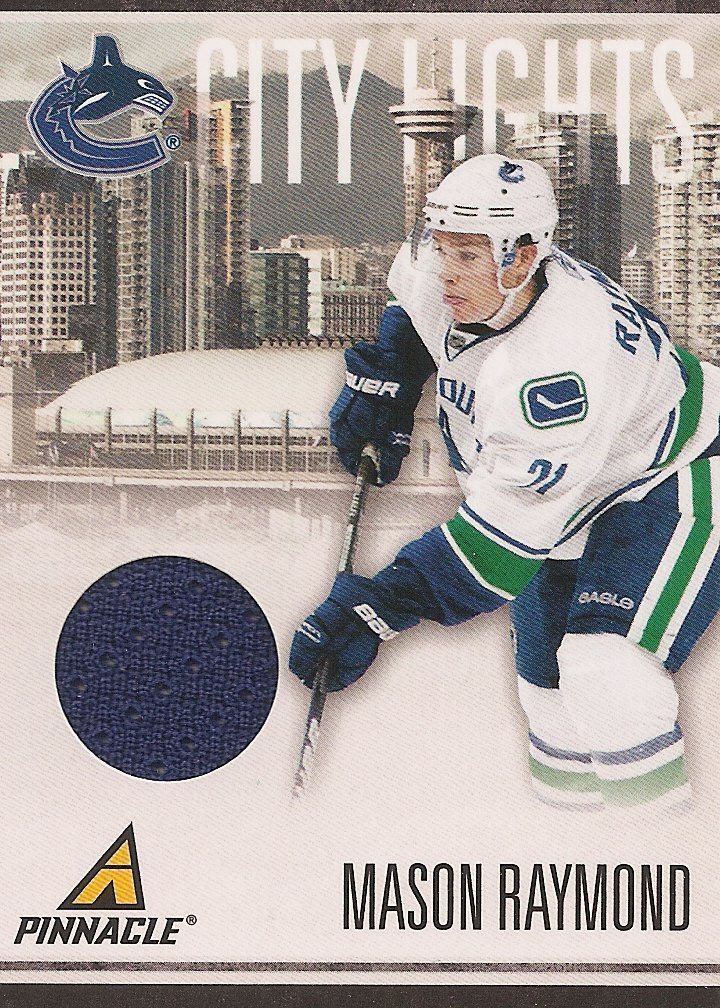 #1 - Mason Raymond Card No. 17 From the City Lights Set
This Mason Raymond jersey card takes the top honors this week. This is a beautiful card showcasing not only Raymond, but the Vancouver skyline. There are a few instances of hockey cards showing off the city that the player plays in... and I've always loved those cards. I hope companies do more of these in the future. One last cool thing about this card is that it is serial numbered 459/499. Serial numbering is always a big plus.

Overall Value -
I'm not sure if I would be willing to shell out a full $20 for this blaster. Pinnacle doesn't really have the collectible 'umph' that other products in the same price range have. That being said, paying about $10 for this box is just about right.

I'm not sure how often I'd dip into the Pinnacle well. There are definitely things to find within packs and boxes, but all in all it was only a so-so type product. It's a fun rip, but probably only for occasions when you want to try something different at a low price range.

Let me know what you thought of my 10/11 Pinnacle blaster box down in the comments below. Have you ever gotten anything good from one of these? I'd love to know!

Every Sunday look out for another exciting installment of Retail Review!
Posted by luke. at 7:16 AM