Another year, another Upper Deck Series One! This signature line of hockey cards has arrived yet again. Hockey card collectors of all ages and spending levels can appreciate this release - it's always a rock solid product that is fun to open and packed with value. I'm looking forward to the stunning photography, sweet insert cards, and the ever popular Young Gun rookie cards that await me in my box - and I'm sure other hockey collectors all around the world feel exactly the same way. Time to get busting guys! 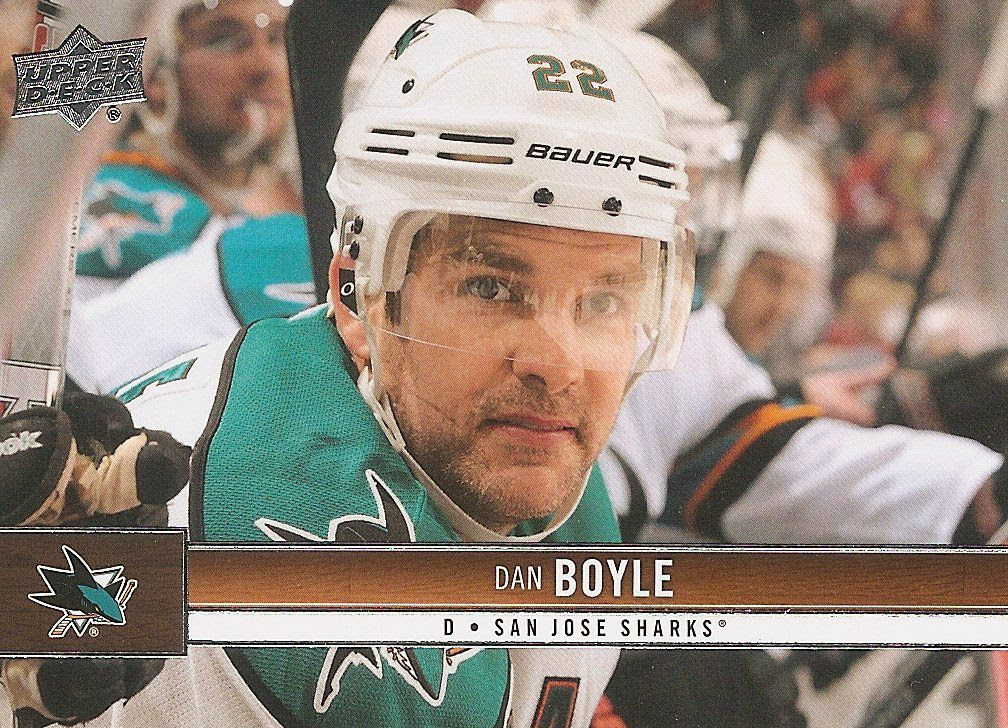 Base Card Design -
Upper Deck has again wowed me with their simple, yet functional and elegant base card design. I appreciate the fact that most of the card front is a full color photograph. The only addition to the card is a bar featuring the the player's name, team, and postion. And what a bar it is! The bar is is mainly a brownish hue separated by silver foil lines with white being the secondary highlighting color. I just love it. It gives a modern wood/natural-feel to the card that I would have never thought of doing in a million years. There's an earthy element here along with streamlined modern design touches - it's beautiful. Whoever designed this card needs to come over to my house and help me create the same feel. It's so slick. Add these elements to the best photography on available on cards... and you've got a winner. These base cards are amazing. If you're going to collect one set a year to commemorate or remember the hockey seasons, there is no other choice than Upper Deck Series One (and then, of course, Two). 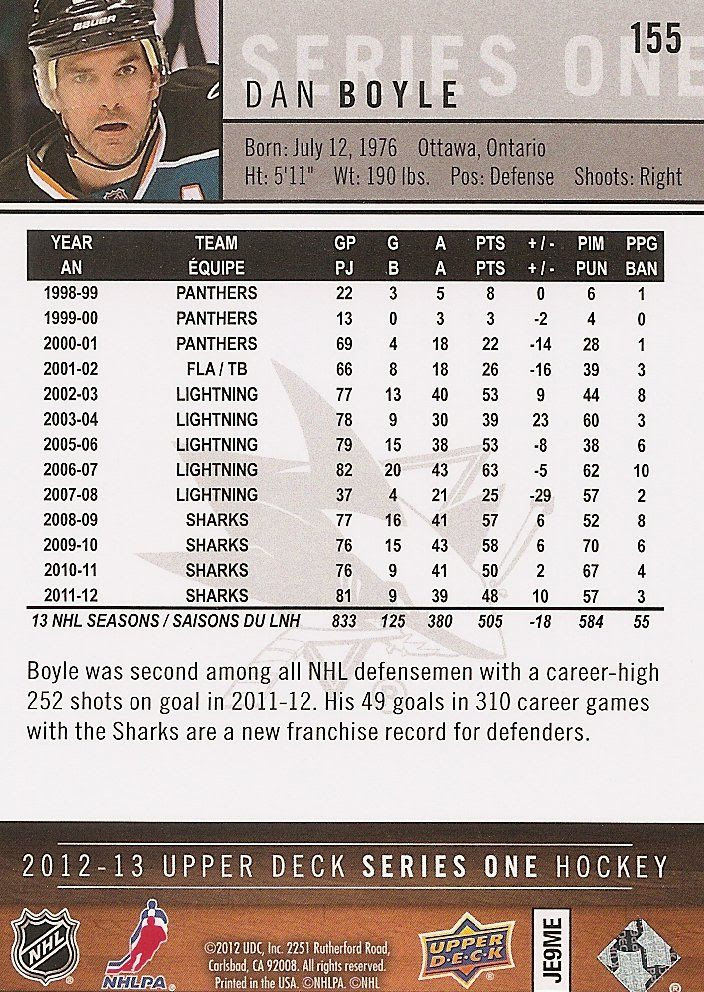 The back of the card is typical Series One fare. A small picture of the player is placed in the upper left corner of the card. Most of the back is dominated by stats, but there is a little write up for collectors to read and learn a bit more about the NHLers. These card backs are purely functional and don't have the amazing flair in design as their fronts, but it's the way it has always been. Maybe one day Upper Deck will surprise us all with a completely revamped back... but I wouldn't hold my breath. 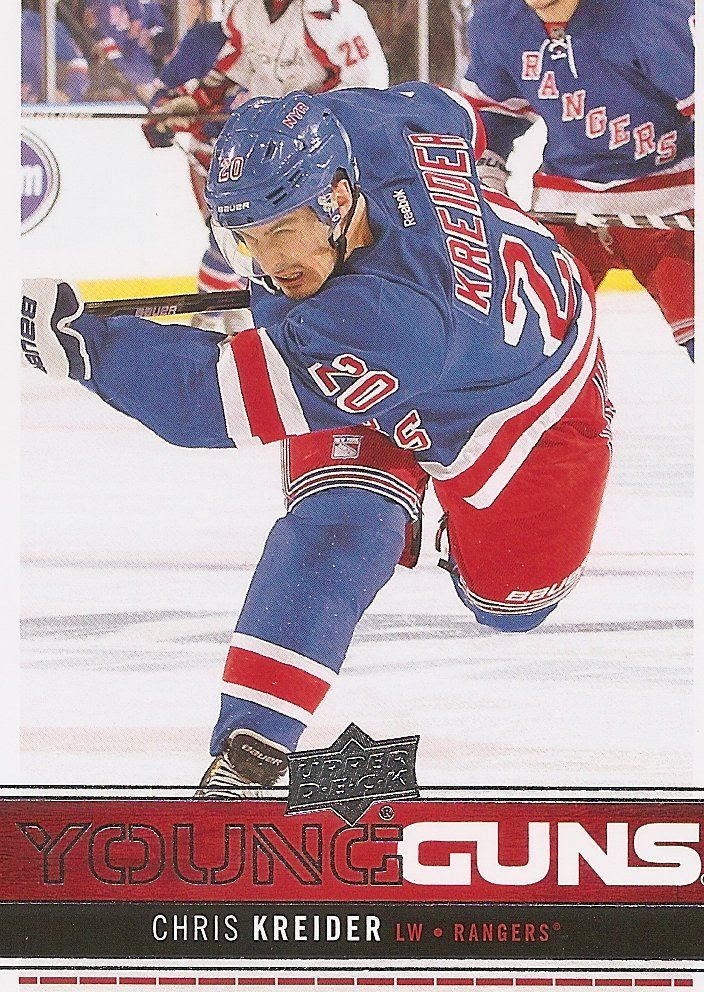 One of the most anticipated cards to come out each year are the Young Gun rookie cards. I always am itching to see what the design will be like. When I saw previews of the cards I was a bit disappointed as they looked rather plain... but seeing them live out of the packs is a different story all together. The Young Gun cards this year are bright and vibrant. The card is very modern and reminds me just a bit of the 2009/10 Young Gun design. While that year had a retro-futuristic feel... these ones just have a futuristic feel sans the retro. The Young Gun logo makes me think of the Battlestar Galactica logo just a little. And the red harkens to the main Cylon color (sorry for those of you who can't relate to the sci-fi references!)... but anyways... these cards are sharp! It's simple, it's different, and they're great. I just hope that we will have equally great rookies on these cards... we might have to wait for Series Two though.

Inserts/Game-Used/Autos -
Upper Deck always loads up it's Series One boxes with a large amount of insert cards. Each box will have memorabilia hits and a chance at an autograph... though those are much tougher to get. Inserts come in a variety of forms - from foil cards to textured to acetate. This year many collector favorites return. Let's take a look. 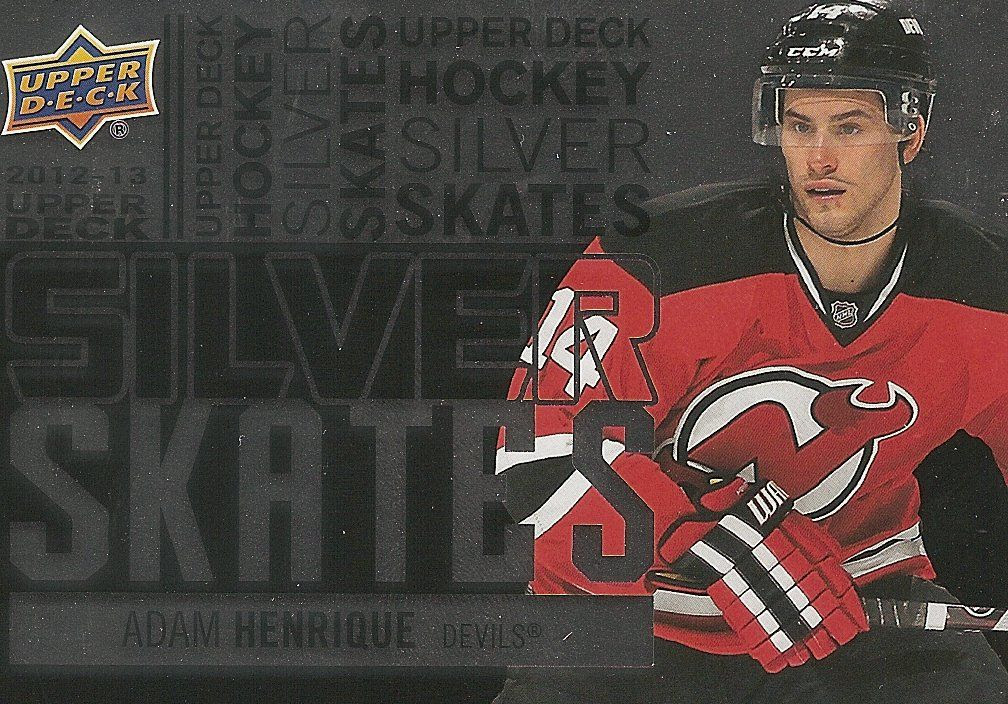 Coming back after a long absence are the Silver Skates inserts. Back in the early 90s, I remember wanting the die-cut Silver Skate cards SOOOO badly. In fact, I was extremely jealous of my cousin when he pulled an Eric Lindros Silver Skate out of a pack. Well, in my box I got two Silver Skates - Adam Henrique and Daniel Sedin. The cards are on all-foil board and are very shiny - sort of like the Certified cards I reviewed yesterday. While these cards are pleasant, they don't stand out like the originals did. I would have thought that Upper Deck would have given these the die-cut treatment as they had originally. That would have made the retro collectors like me salivate over them a bit more. Opportunity dropped here. 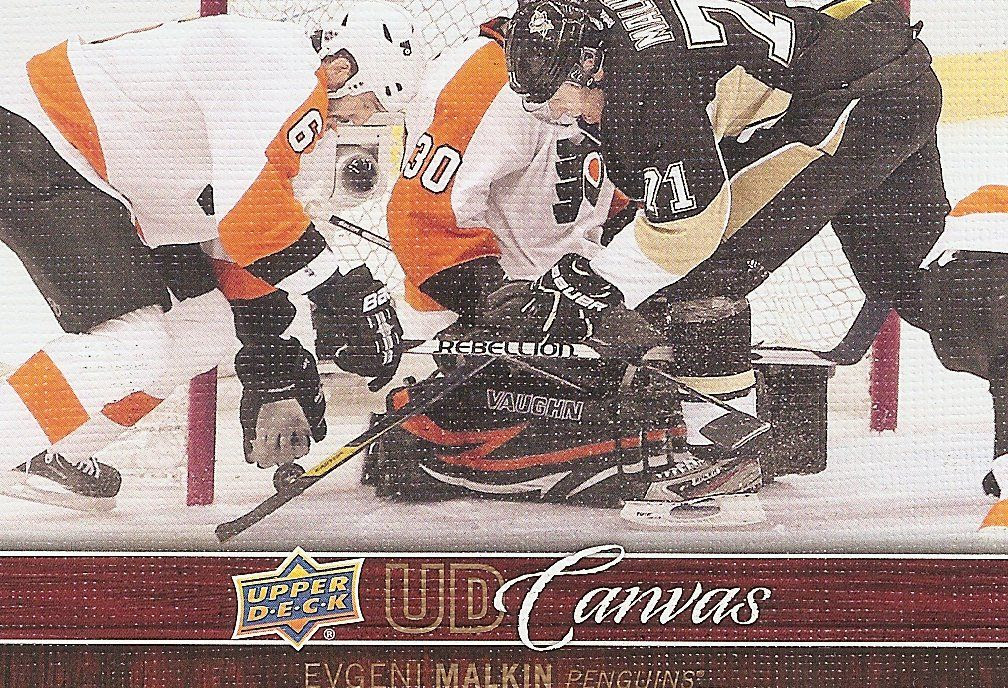 Unlike the Silver Skate inserts, the Canvas cards have an improved look to them. These cards feature even more unique photographs than their base card counterparts (who knew that could happen!). From what I have seen, the Canvas cards are horizontal and have a classy deep red border. Each card is textured and feels as a painting would. These cards are nice enough on their own to drive collectors into wanting a set of them. This would make a spectacular set to collect - it's great to look at and a challenge to put together - especially the rarer and higher valued Canvas Young Guns. 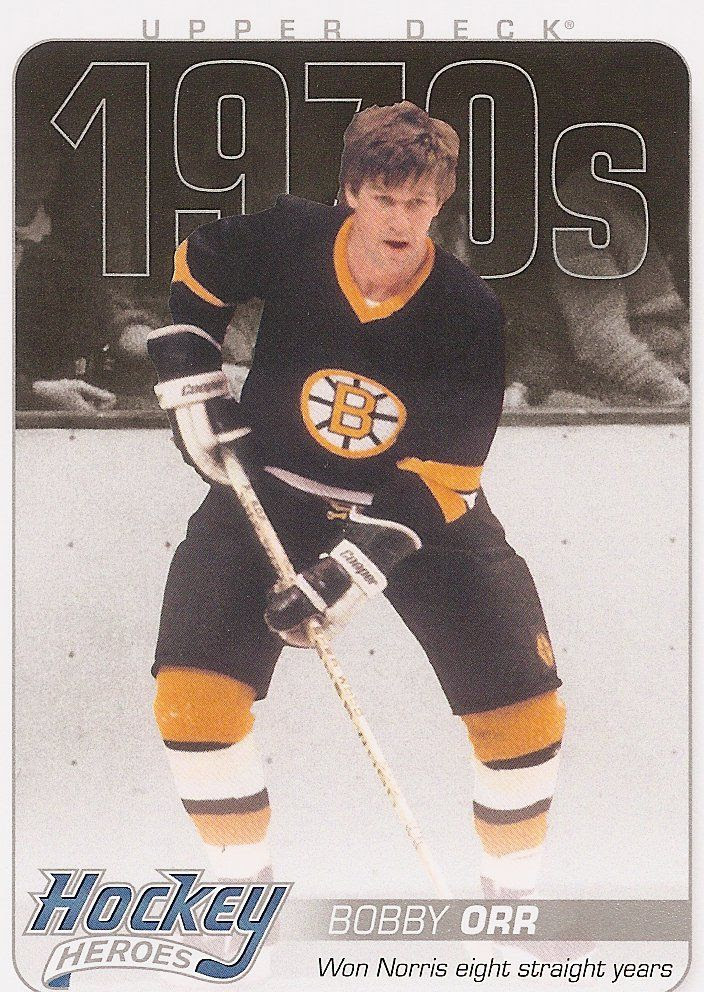 Chugging on year after year is the Hockey Heroes line. I've never been a huge fan of these cards, but apparently there are those that put this set together diligently each year. To me the cards could use a break, but I would never be opposed to pulling an autographed version of one of these cards. I believe the autographs are on-card and hand numbered. But other than those super rare gems, I usually just toss these cards in as extras when I do trades. 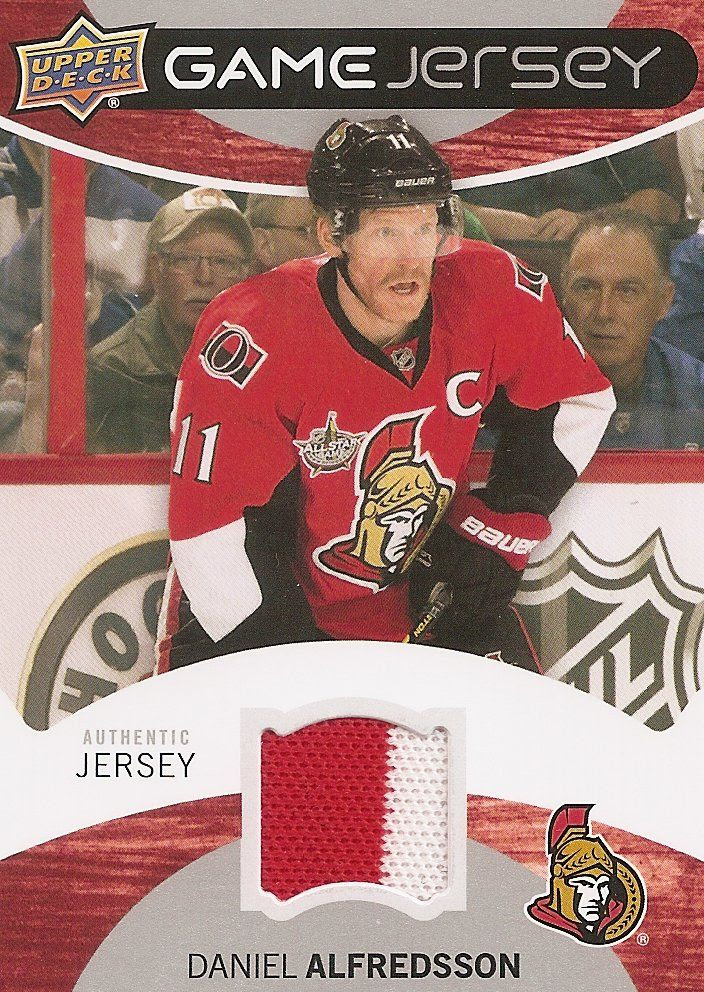 Game jerseys add a bit of value to the box. I'm glad that Upper Deck decided to change up the design just a little this year. Rather than the player amidst a graphic background, they are now featured in an action shot. I like it. It gives a bit more life and liveliness to the card that was missing in past iterations. These cards do not go for much... but sometimes Upper Deck is sneaky and super-short prints a player or two. Keep an eye out for that as well as their difficult to pull patch variations. The patches are serial numbered to just 25 each. 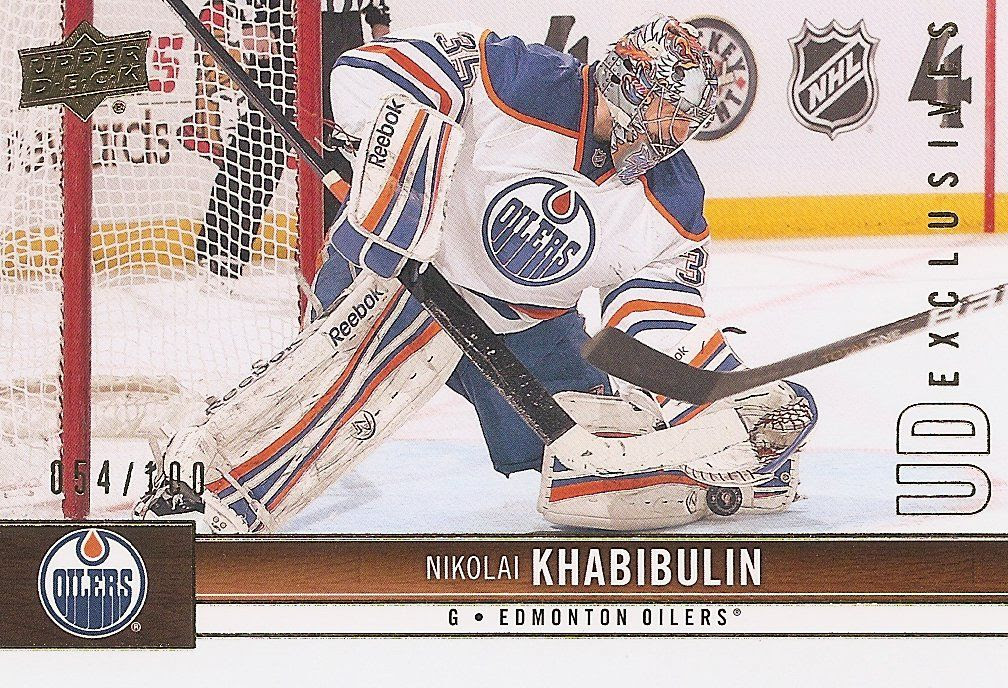 Upper Deck Exclusives numbered to 100 and Spectrum cards numbered to only 10 are popular parallel cards to find within packs of Upper Deck. Both versions are always a popular card to chase for player collectors. The Young Gun cards are especially hot. I always see prices of those ones rise. 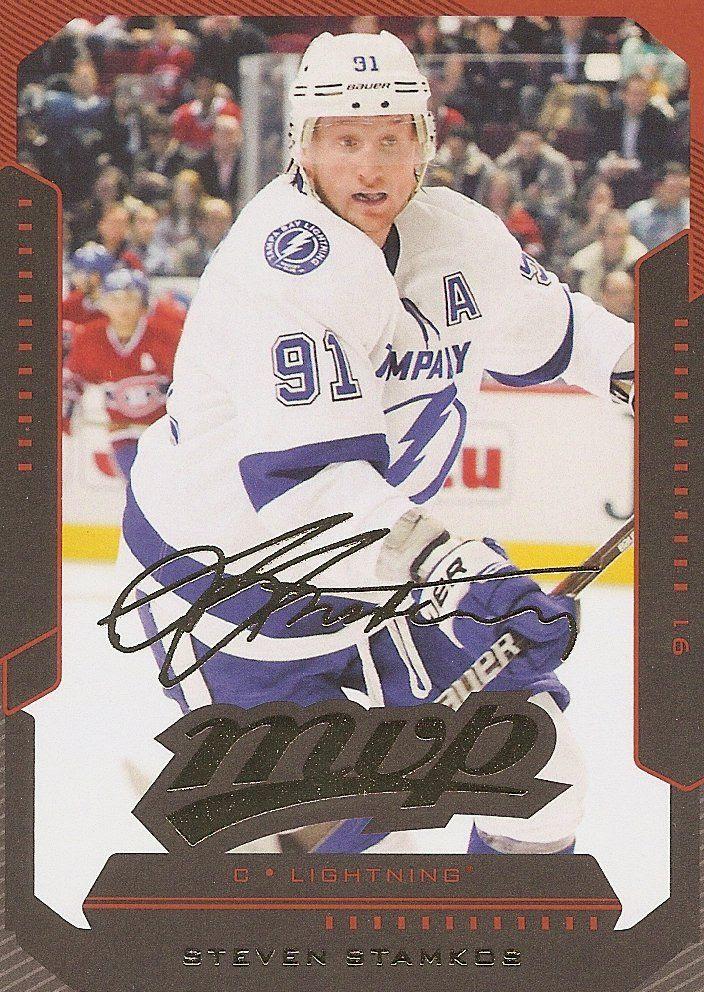 Rounding out a box of Upper Deck Series One are the MVP insert cards. Upper Deck has chosen to include this now 'dead' set into Series One once again. Though MVP cards are fine looking, I personally didn't think they needed to be here. Are there really collectors out there clamoring for these cards? Maybe there was a petition out there demanding their return. I really don't know... but in my opinion these cards were completely unnecessary. I would have been happy enough without them.

As usual there are many more inserts to find in Upper Deck Series One. Though I didn't pull an autograph, I know they are out there for collectors to find. There are also serial numbered acetate cards randomly inserted. I guess you'll just have to buy some and see if you have better luck than me in pulling them!

Overall Rating -
For the price of a box, I'd say there is some good value here. As I've stated in other reviews, the NHL lockout has hampered this product in terms of the rookie pulls... but I think there are other cards in Series One that are worth collecting. And this being a more value-priced product, it's easier to drop coin here than on other, more pricier rookie dependent products.

I had a lot of fun breaking the box and looking at all the cards. You really can't go too wrong with Upper Deck Series One... but if the NHL comes back... it'll be all about Series Two this year. I suggest having fun busting a box or two. If you like it, get some more. If you find the rookie selection too tepid, wait and hope for a better second series.

All-in-all though, I think Upper Deck has done a nice job with their flagship product once again. It looks great and boxes can hold a few pleasant surprises.