ITG comes strong with one of the heaviest hitters in their product line-up - Superlative. This super-premium release comes in a unique, very limited, package. The price point of this product is on par with Upper Deck's The Cup and Panini's Dominion. It's also equally exciting to bust into as well. Let's see what this book of hockey delivers! 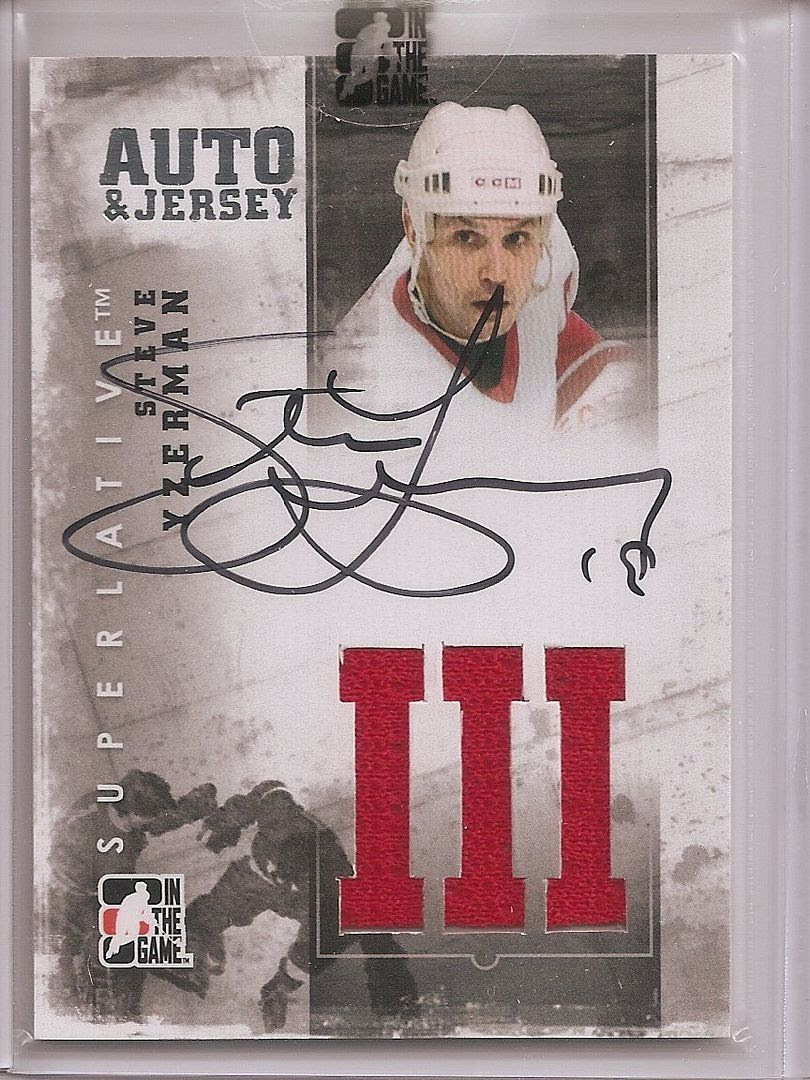 Base Card Design -
What base cards? Unlike The Cup and Dominion, Superlative does not have any standard base cards. I think this is a great idea by ITG. While ultra-premium base cards can be collectible, they can clog-up a product. It's really sweet to open up a book of Superlative and have every card be a hit. EVERY CARD is very limited and has either memorabilia, an autograph, or both.

Inserts/Game-Used/Autos -
Well, like I just mentioned, Superlative is about only the goods. This is an extreme concentration of limited autographed and memorabilia cards. Each card comes in its own toploader sealed with an ITG sticker. All cards feature very low print-runs, however, some are so low that they have been individually hand-numbered. Excellent! 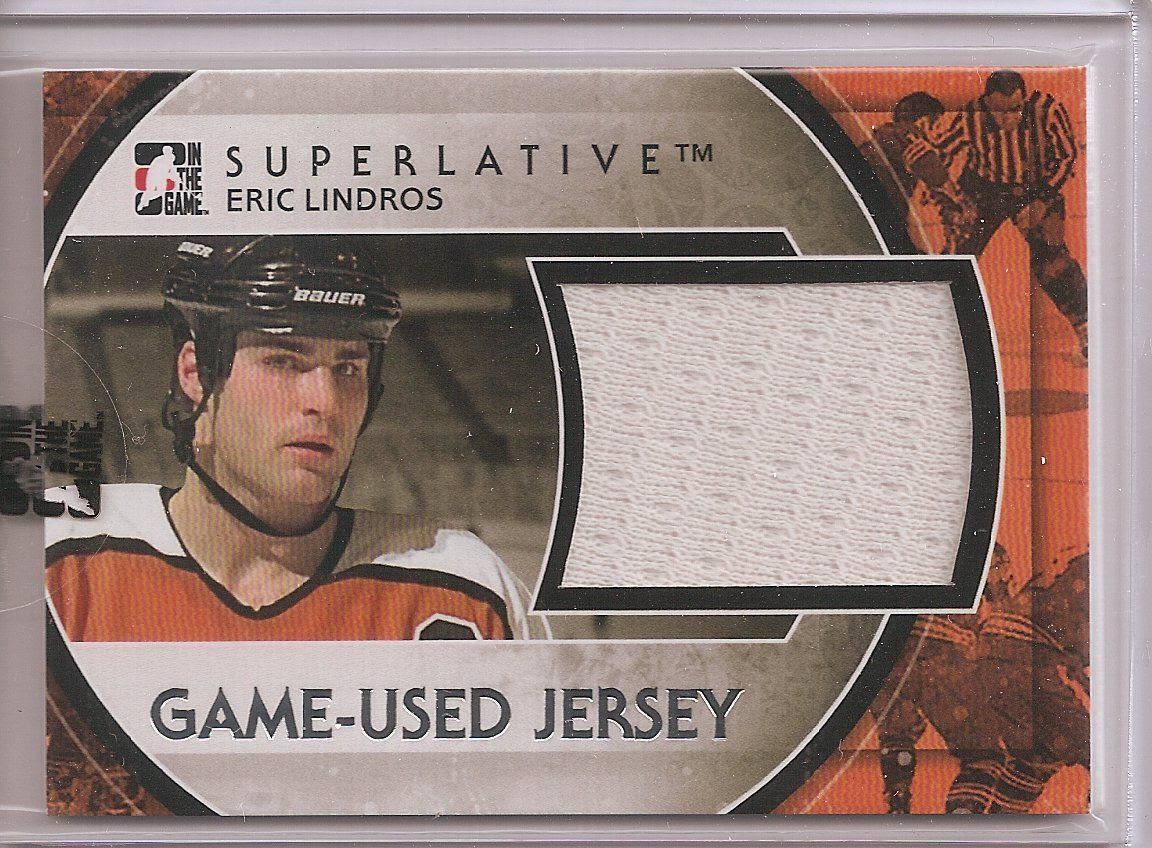 Perhaps the most lack-luster cards found in Superlative are the plain jersey cards. Though these cards only carry a jersey piece, ITG has given collectors a sizable chunk of it in the card. And while I usually harp on ITG jersey card designs, the Lindros above is very well done and has a more premium feel than the ones I have pulled from their other products. This card has a nice photo of Lindros, a bit of foil, and Philadelphia's team colors. The jersey piece is guaranteed to be from a Lindros Flyers gamer and has a print run of just 30. 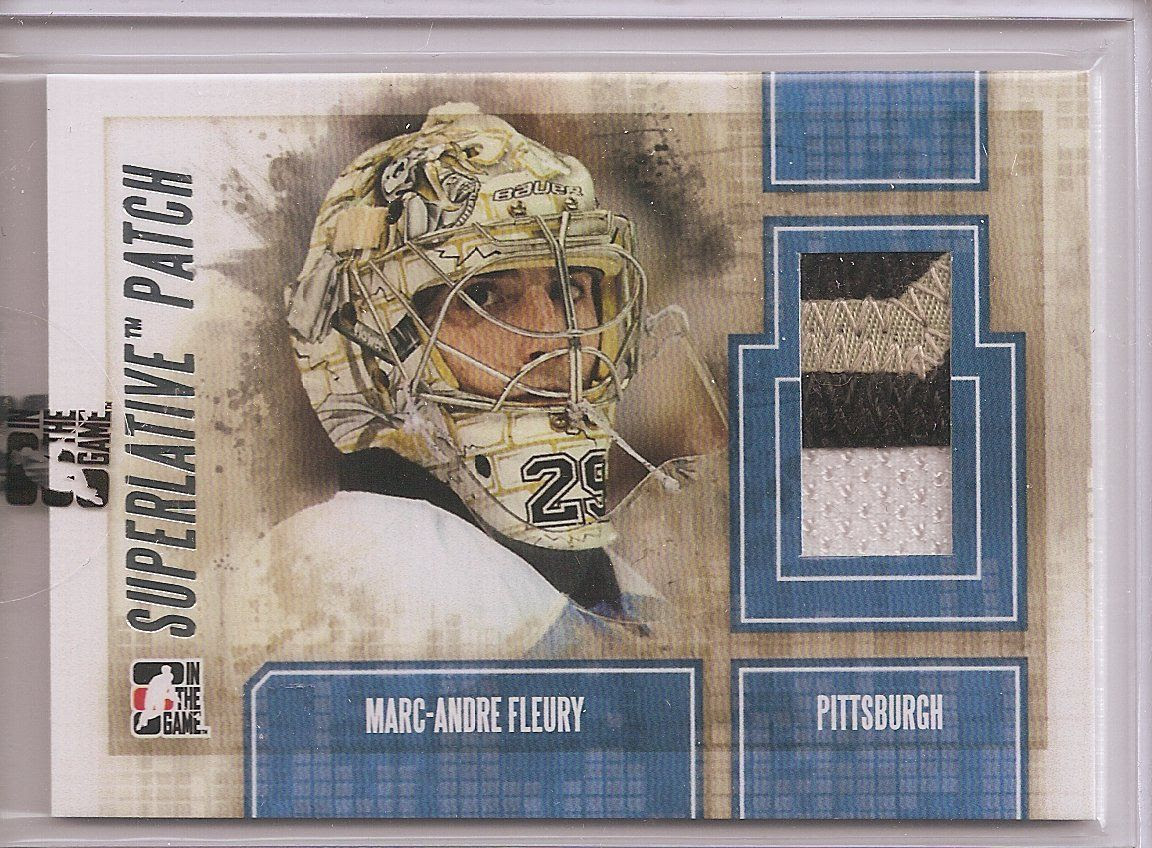 Another only-memorabilia card is the Superlative Patch. Though I think the patch piece on these cards could have been larger, the card itself is designed beautifully. The space on the card is utilized smartly and the colors chosen on the card work well. This is simply a clean, modern, superbly designed card. This is the direction I'd love to see ITG move in with all their future products. I would definitely enjoy ITG cards if they were all like this one was in terms of design. It's definitely and ITG card, but without the 'third wheel' feel that ITG cards sometimes have. 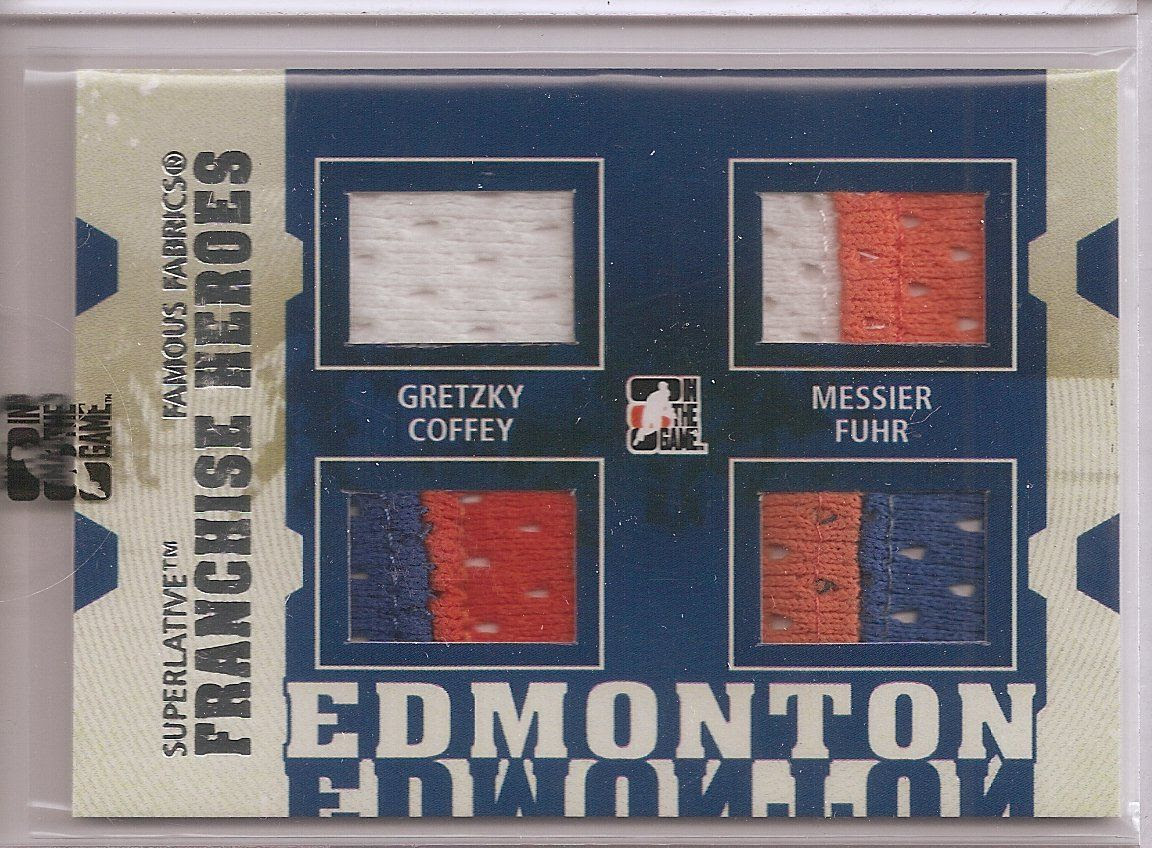 Some Superlative cards will come with no photos on the front. I have seen creative ideas such as banner cards that celebrate players who have had their numbers retired in this product, but there are also cards like this Famous Fabrics Franchise Heroes card. With such hockey awesome-ness here, I really wish there were some player images. I'm pretty sure ITG can't use Gretzky's image, but there must be a better way to make these cards. Other than that, I do love this card for the hockey royalty on it... plus is numbered 5 of only 9. 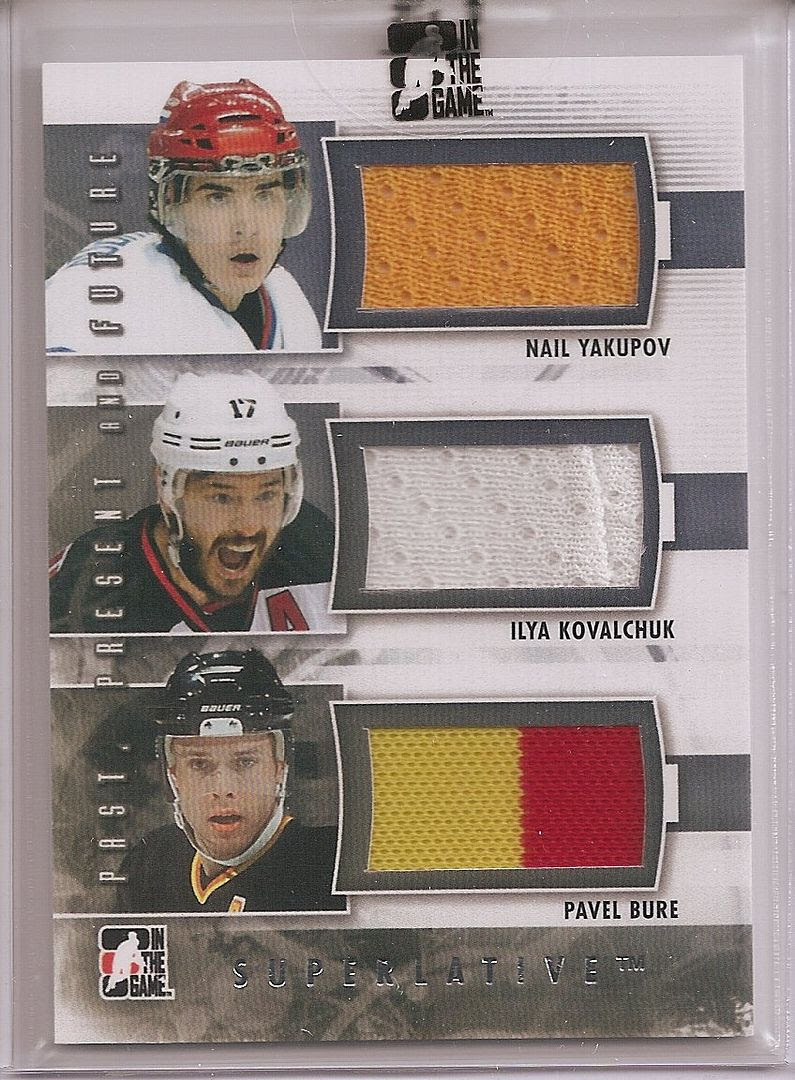 Now here's a great way to handle multiple players on a card! The idea of having past, present, and future stars grouped together is a stellar one. This card design is all-ITG... it's familiar... but done in a better way. The colors used and the touch of foil give it a few notches over other ITG cards of similar design. Aside from design aspects, this card is notable because it features number one pick Nail Yakupov on it. ITG has had Yakupov in their products for some time now whereas Upper Deck and Panini haven't. For collectors wanting some high-end cards his, ITG is the only way to go at the moment. One more thing about this fabulous card... Pavel Bure. How awesome is that Canucks's jersey piece? Signature colors of the Canucks of the 90's. Oh, and this card... numbered 9 of 9. 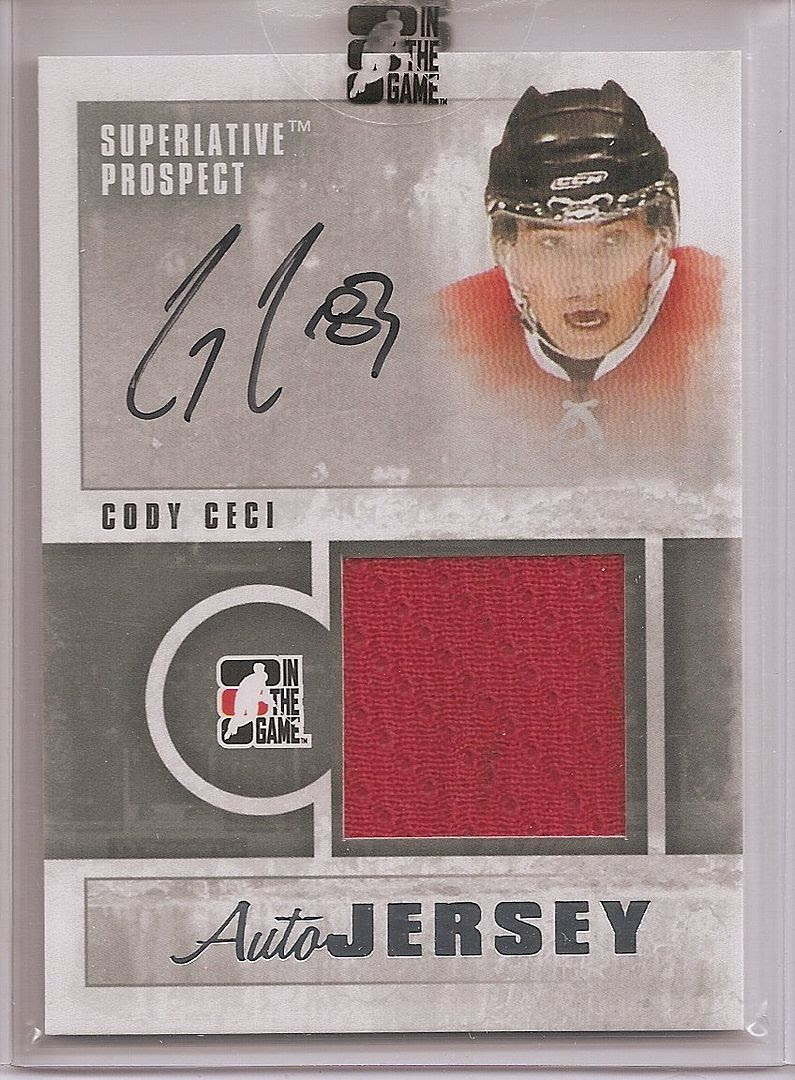 Each book of Superlative features young rookie talent. I've already mentioned Yakupov, but many players yet to don an NHL uniform can be found here. This is both exciting and also a potential concern. While most of the cards in Superlative are of established, star players, these young players may or may not pan out to be great NHLers. But... I have to credit ITG for their inclusion because they act as a wild card in the product. For guys that become great players, these cards will have some extreme added value! Cross your fingers for these guys! 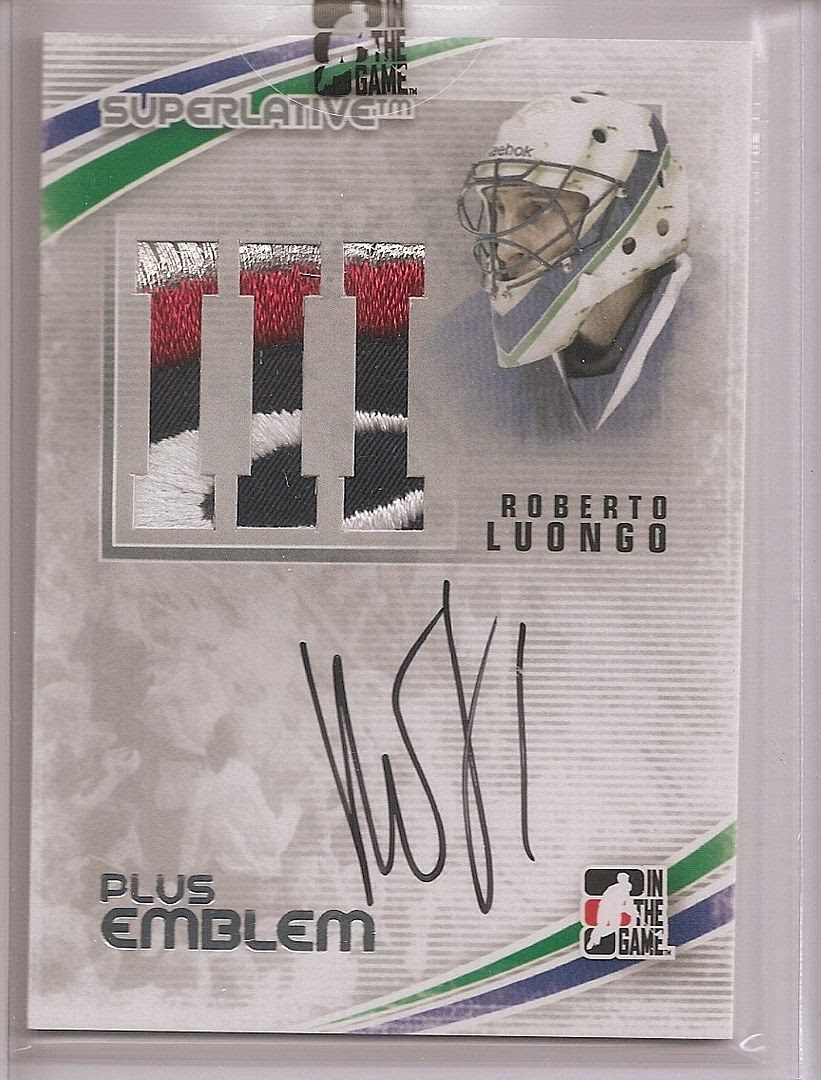 Now what can I really say about the Luongo shown above. That is one ridiculous piece of emblem - so many breaks and colors... wow! This card would be a showpiece type card for any Roberto Luongo collector. And in Superlative, there are many amazing patches, sticks, skates, and other pieces to be found.

Superlative is a treasure trove of crazy hits.

Overall Rating -
I just have to put this out there: Superlative is AWESOME. I've seen many breaks of it online... and it hasn't disappointed. The book that I bought was very solid, and I had a ton of fun and excitement opening it... just as much anticipation as with The Cup or Dominion.

The cards you get for your money have a super-premium feel. The autographs and memorabilia are carefully put together and created. I can tell a lot of effort was put into this product by ITG. It's like a labor of love. You just get that feeling upon opening it - it's hard to describe... but it's there... and it enhances the break so much.

If you can afford it... BUY IT! There are only 1,500 books out there. I'm sure they are going fast. I really wish I could get another one... but I'll just have to savor the cards I was able to get this time around.

Given a choice between a box of The Cup, Dominion, or Superlative... I think it'd be a coin flip between The Cup and Superlative. It's that good.

Yes, I'm gushing over this stuff!

Check out my book of Superlative Vol. 3: