From the high-end retail last week to the lower-end of the spectrum this week... here comes a break of 09/10 O-Pee-Chee! There was a suggestion to start at the lower end and make my way up. I thought that was a pretty good idea so how I chose to go with the OPC blaster today. I'm actually not at all sure as to what to hope to get inside this box. Most of the best rookies from 09/10 came in the stand-alone OPC Update boxed set. Is there anything good worth pulling? I'll just have to open it and find out! 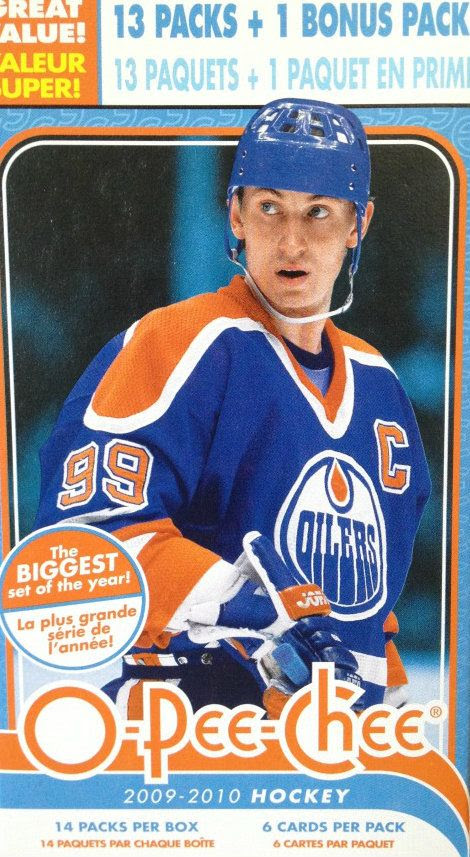 I have to be honest and say that the ONLY reason I picked up this box was for the price... under $7. It's pretty hard to beat 14 packs for that little coin. I think it's hilarious how the top of the blaster says '13 packs + 1 bonus pack!' I mean, c'mon... who're you kidding? It was always meant to have 14 packs in it. Gotta tip my hat to whoever thought of that idea. If that get's people to think they are getting a special deal and buy it, then more power to them!

Since I have no idea if anything of value can be found here, I'm just going to enjoy breaking the box and checking out all the cards. Being on the lower-end side of things, I'm expecting a variety of inserts to keep me interested in seeing what's in the next pack. Knowing OPC products, there are probably some interesting cards to read and learn from.

If by some miracle I get a hit, I'll be very, very excited and happy. The odds of hitting anything like that are outrageous. Stated odds for jersey cards are 1:1080 packs while autos come in a bit easier at 1:432 packs. I have to admit that OPC mem and auto cards are pretty cool looking... and a bit hard to find on the secondary market since not a whole lot of people break the product heavily.


Review -
This doesn't have much to do with anything... but... the OPC packs are darned slippery. Same thing happened when I bought my hobby box of 12/13 OPC... lots of slippery packs. Just sayin'.

Anyways, I enjoyed this break of O-Pee-Chee. I definitely was not expecting much... and I didn't hit anything of crazy value, but overall the break was very fun. OPC is a great product to bust open and sort though. The cards of of nice, retro, quality, and the insert sets are well thought out. And in hobby versions of the product, there is at least a slim chance of getting a hit.

This year's retro base cards have a clean and simple design. The foil versions of the cards definitely stand out when you open the packs. The shiny cards make busting a bit more special. I got to say that if this set was released in the 90's, collectors would have been all over it. Now, it's just a lower end product to crack just for fun.

Though I'm not a set collector, OPC offers a great opportunity to build a challenging set. The front of the blaster boasts that it is the largest set of the 09/10 season. Set collectors now are few and far between, but I can see them taking up this challenge and having a blast doing it.

Check out what I thought were the three top cards of the break: 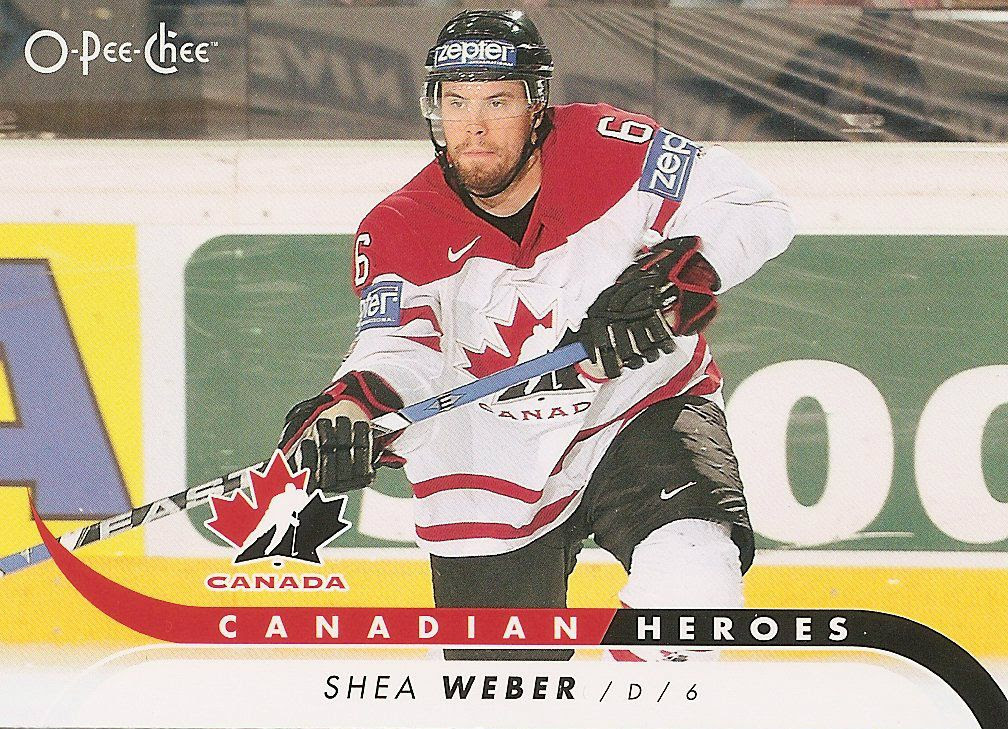 #3 - Shea Weber Card No. CB-SW
Though these Canadian Heroes cards are so simple, they look great. These cards are different than the standard OPC cards in that they have a glossy finish rather than cardboard stock. The color scheme goes perfectly with the Canadian theme of the card. This would be a sweet set to put together for anyone who is a fan of Canadian hockey players. 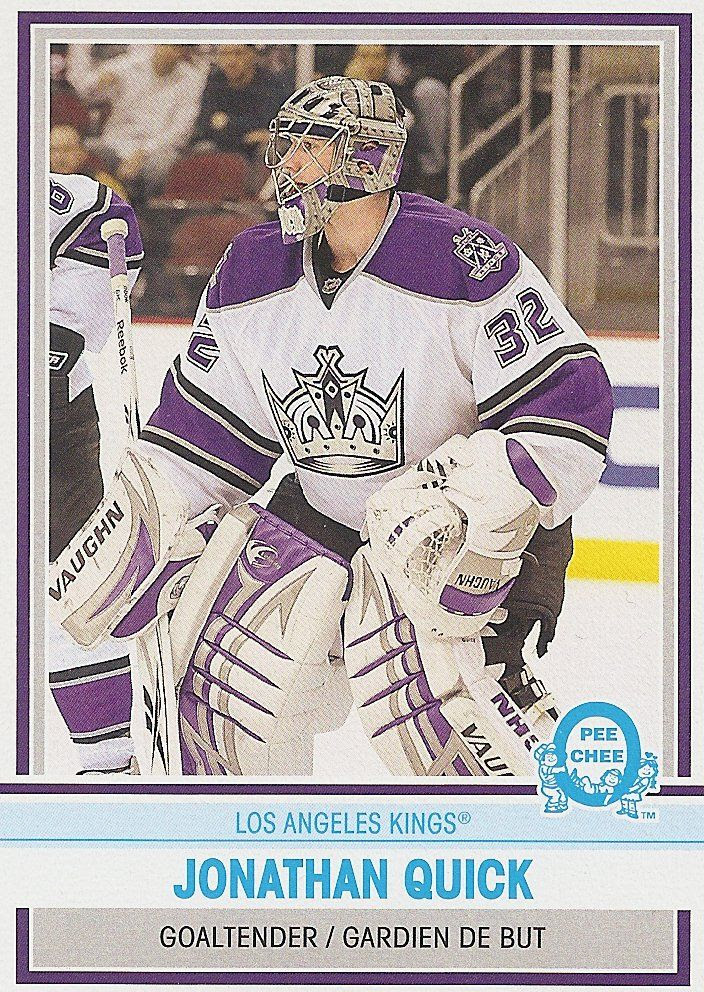 #2 - Jonathan Quick Retro Card No. 28
This is a retro design that I am a big fan of. It gives me the feeling of a late 80's or early 90's card. The card is very clean with simple lines bordering it. In my opinion, it's better than the most current OPC retro design (12/13). Though I'm not a Kings fan by any stretch of the imagination, I definitely respect Jonathan Quick for his amazing goaltending skills. And this is a pretty sweet retro card of him. 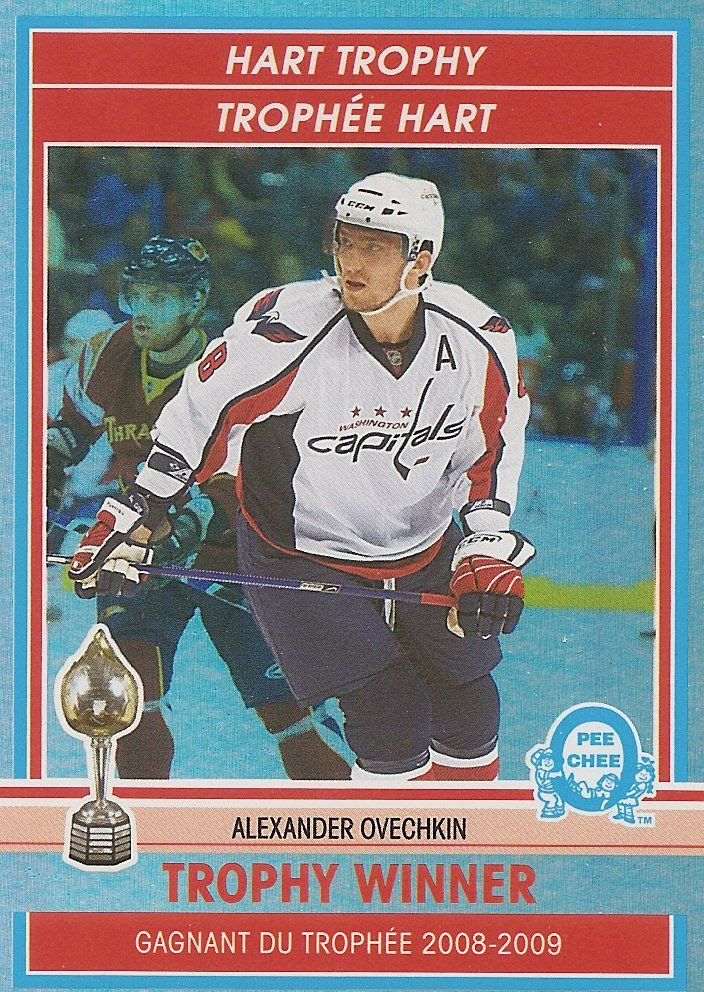 #1 - Alexander Ovechkin Card No. TW1
Shiny! That's what all collectors were pretty much hunting for in the insert card era. These award winner theme insert cards would have fit right in back then. It's cool to get foil cards within packs filled with retro feeling cardboard cards - it's a nice contrast... and it sort of makes these cards seem unique in the product. Better yet is that one of my shiny cards was of Capital's superstar Alex Ovechkin.

Overall Value -
It's very hard to complain about value with the entire blaster was only about seven dollars. Though this blaster didn't bring in the big hits or big money, it was a bit of a time warp back to when inserts and foil were all the rage.

I liked breaking this blaster quite a bit. It definitely brought back memories of when sets were huge and inserts were valuable. Makes me want to go and sort a big pile of cards...

Let me know what you thought of my 09/10 O-Pee-Chee blaster box down in the comments below. Have you ever gotten anything good from one of these? I'd love to know!

Every Sunday look out for another exciting installment of Retail Review!
Posted by luke. at 7:44 AM