2010-11 was a very big year for great rookie cards. Players like Taylor Hall, Jordan Eberle, PK Subban, and more were eagerly sought out by collectors. I remember how exciting it was to purchase any product that year just because the rookie crop was so great. For today's Retail Review, I have high hopes of getting someone of value in this blaster. This is the last blaster from my large retail order at Dave and Adam's Card World. Let's hope it's a good one! 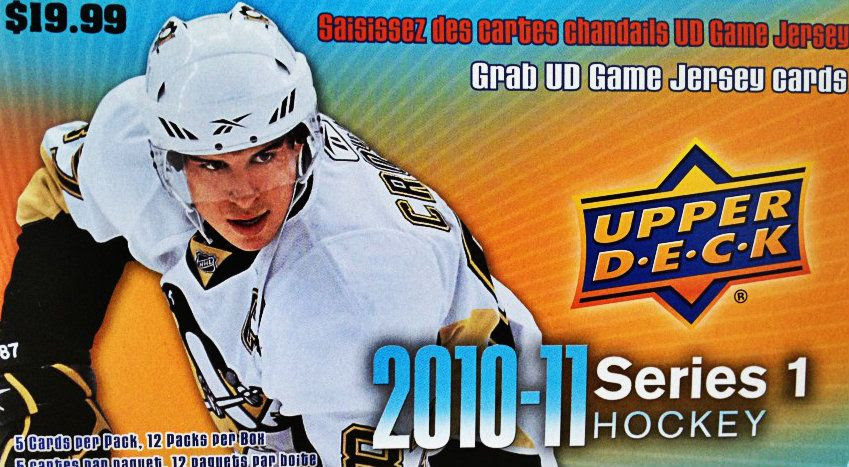 The price of the blaster was great - at Dave and Adam's price, it worked out to just $1 per pack - a pretty sweet deal! And as I've said before, opening up UD Series 1 blasters is great fun just because of the sheer number of packs within. Opening up 12 packs makes for a slightly longer and more satisfying experience.

Though I'm mostly interested to see which Young Guns I pull out of this blaster, there are other inserts of value to be found as well - including jersey cards. I feel like I've gotten quite a few blasters now but I haven't gotten one of the standard jersey cards yet. I really wonder if this one will finally yield one. I mean, I've pulled some great things from these retail products already... but a standard jersey card from Upper Deck hasn't been something I've been able to get. Maybe in this one? Who am I kidding? Most likely not!

Review -
Just as I predicted, I didn't get a jersey card... but I did find things in this box that I had totally forgotten about. One of the packs in the middle felt a little bigger than the others. I actually thought I had a memorabilia card on my hands. Well, I was wrong. Turns out that it was a sleeved buy-back card. The sleeve made the pack bulge a little. For those of you who don't know what a buy-back card is, it's a card from an older release that Upper Deck has re-obtained and re-inserted into packs. Usually there are stamps on them that signify they are special cards. The ones in 10/11 blasters only come with a certificate that say it was a buy-back card. These cards are nothing but the standard cards collectors could have found in previous products - the certificate really didn't mean much except to signal the fact it was a buy-back. That's too bad.

Overall the entire box was a bit of a letdown I have to say. My Young Guns were not of any of the big names of 10/11... and my inserts were not of any huge stars or even PC players. There was a lot of potential in the product, but this box left me wanting in a big way!

I had a hard time choosing three cards this week... but here they are: 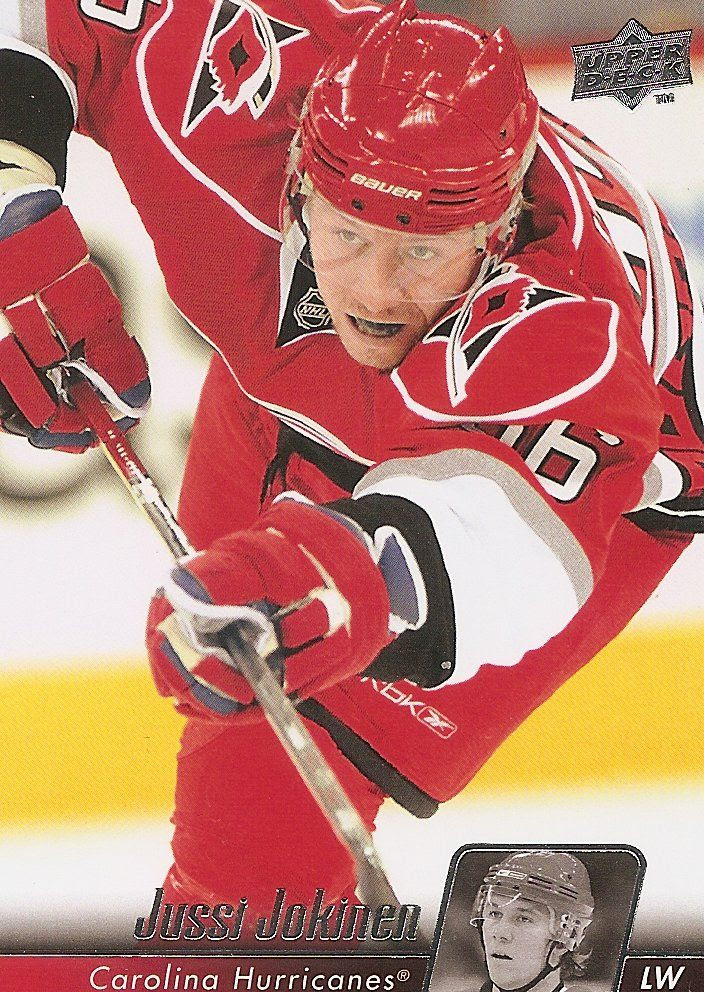 #3 - Jussi Jokinen Card No. 163
Upper Deck always has some of the best photography in cards - and here's a great example. This Jussi Jokinen card showcases an extreme close-up action shot. I'm really not sure how much closer you can get to the player than this! The card captures an intense moment really up-close and personal. It's one of those cards that though the player may not mean much to me, the awesome-ness of the photograph actually can give me pause. Quite a feat! 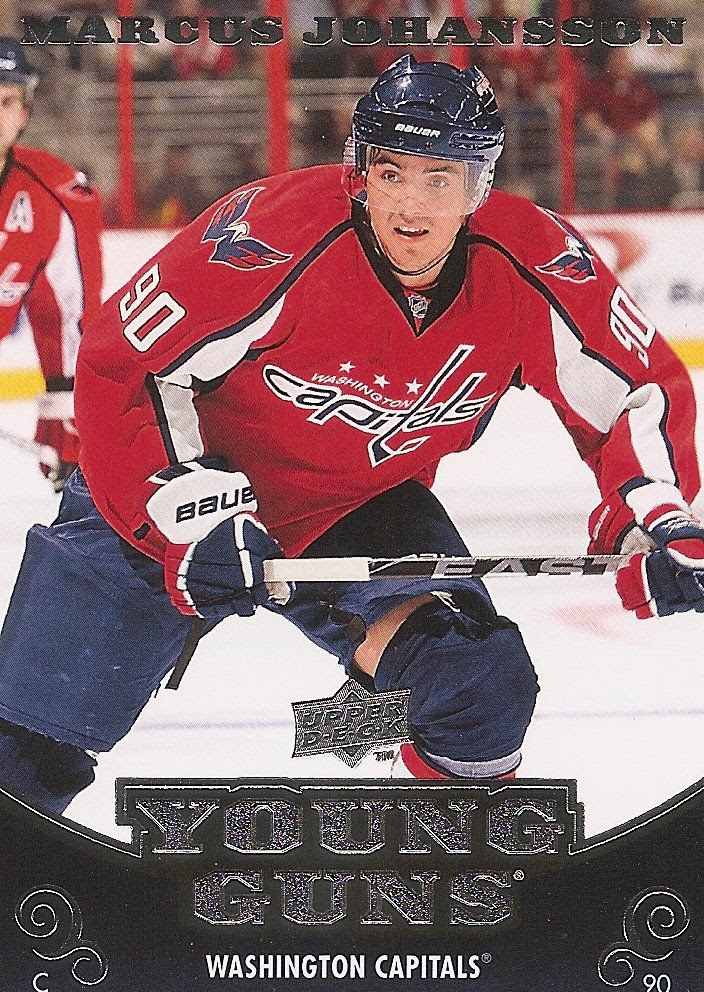 #2 - Marcus Johansson Card No. 249
This Marcus Johansson cards creeps into the number two spot of the break. Johansson was a moderately popular rookie a couple years ago, but definitely not one of the big boys to find. Still, this was probably the best card in the break in terms of value. 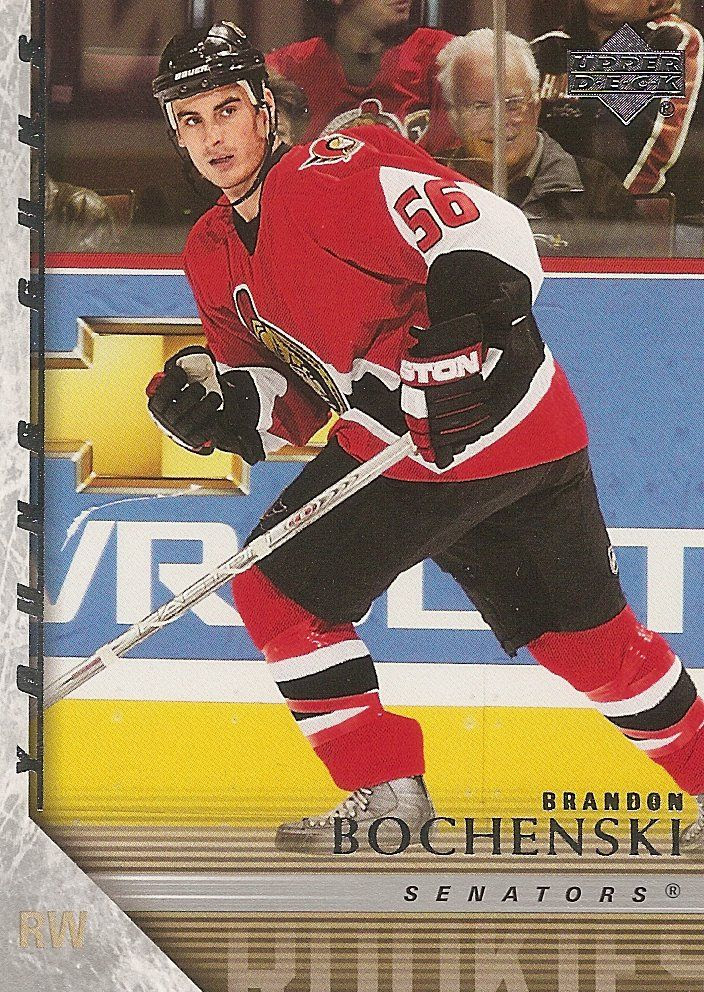 #1 - Brandon Bochenski No. 238 (05/06 Buyback Card)
This Bochenski Young Gun steals the top spot in this week's top three because of its surprising nature. In no way would I have ever thought of finding a card from 2005 to be in my 2010 blaster box... but here it is. This has probably been the best buy-back i have found. But I find it a little disappointing that the 2005 rookie I got was Bochenski. I mean, there were a few sweet rookies (ahem... Crosby) that year. But it hat to be Bohcenski for me. Well, I guess it fits the mundane nature of this particular blaster box.

Overall Value -
This blaster was definitely on the weaker side. Though there were some surprises found in the box, they just weren't the right names to make me feel good about this break. Still, at about $12 this blaster was a good deal. I don't think I would mind giving this product another shot. There are just too many good cards to find and chase. I shouldn't let one dud box hinder me taking advantage of a good deal like this. So though this particular box's score may be low, there isn't too much reason to shy away from these boxes. I'd be in for another the next time I need to fill up an order!

Let me know what you thought of my 10/11 Upper Deck Series 1 blaster box down in the comments below. Have you ever gotten anything good from one of these? I'd love to know!


Every Sunday look out for another exciting installment of Retail Review!
Posted by luke. at 7:28 AM