In the Game (ITG) has come up with another very specifically themed set of hockey cards for collectors to chase, this time focusing on two very storied franchises: the Toronto Maple Leafs and Montreal Canadiens. Knowing how crazy collectors of these two teams can get, this product is already assured to be popular. Let's take a look at what ITG serves up in a box of their just released Forever Rivals set! 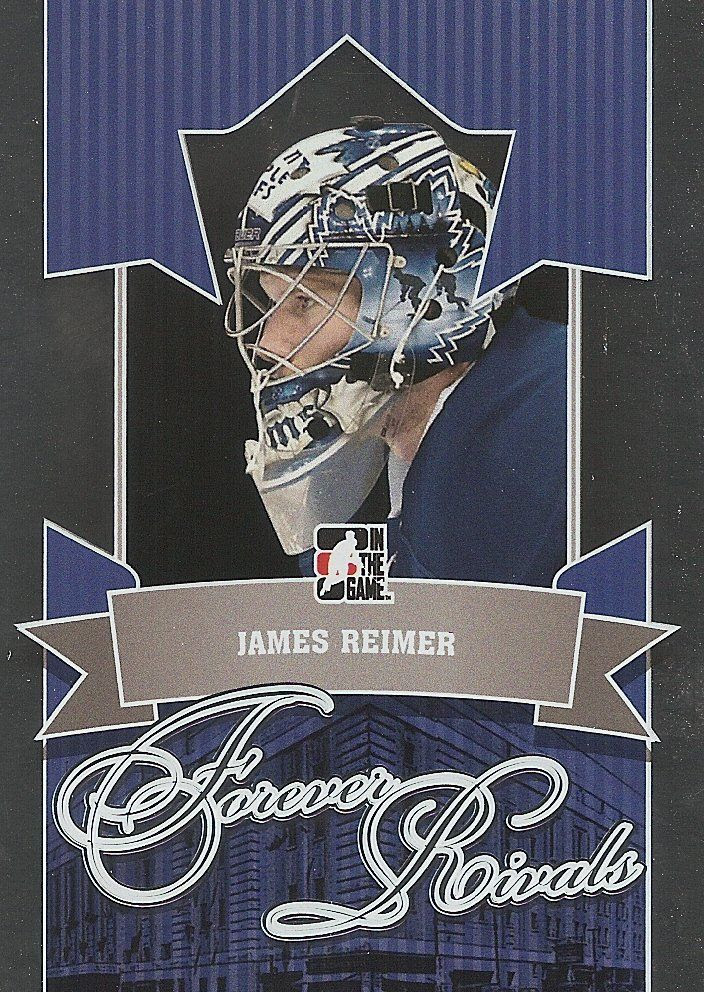 Base Card Design -
I can say that this base set has by far my favorite ITG design. These cards look sharp! The card is done on foil board and has a shimmer reminiscent of Panini Certified cards. To me this is a giant leap forward in design for ITG - these cards have taken quite a step up. There are many elements to the card that I think make this card especially well done. First of all, I love the shine of the card. The foil gives the card a higher-end feel. And these cards feature a flat foil rather than a speckled looking foil a la Captain-C. These cards are definitely superior to Captain-C as they have a more mature feel. The 'Forever Rivals' logo is another element that I think is spot on. The classy cursive font done in foil at the bottom of each card really caught my attention when I first saw them, and it's my favorite part of the card. Lastly, a more subtle call out to the teams occur in the form of a logo 'cut-out' frame around the player's image. What a great way to bring about the team logo without having it there... genius! 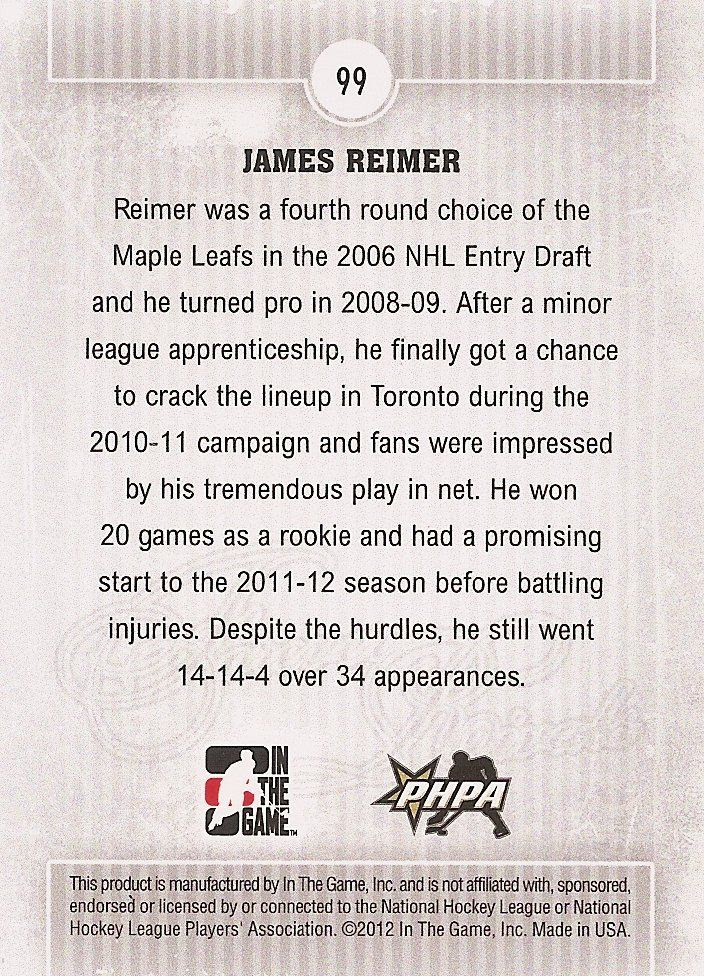 As for the card back, ITG has gone with the paragraph of information approach yet again. The backs of the card are absolutely unspectacular in design, but they make up for it in the interesting-to-read department. It's always great to read the backs of ITG cards to learn a little bit more about the players. With this set featuring many players from the past, newer collectors can easily get caught up on players they may not have seen play. It's a nice little lesson in history for sure.

Inserts/Game-Used/Autos -
Each box of Forever Rivals will come with 3 inserts, 3 game-used memorabilia cards, and 3 autograph cards - definitely a good amount of hits for a small compact box! 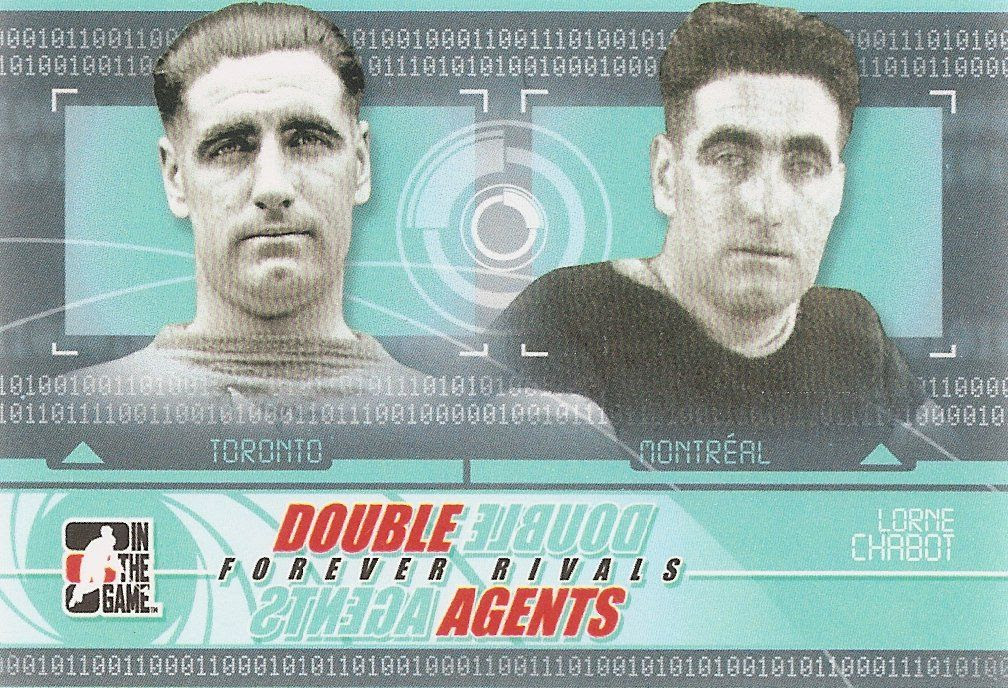 As much as I liked the base cards... I can't say I'm a fan of the standard insert cards found in Forever Rivals. This Double Agents insert card is certainly a good idea - having a card featuring a player who played for both Toronto and Montreal - but the design execution is a bit lacking for me. It's obvious that the design is supposed to be a futuristic government computer screen... but rather than looking modern and slick, the design looks like it came from a 90's science fiction television show. Not good. 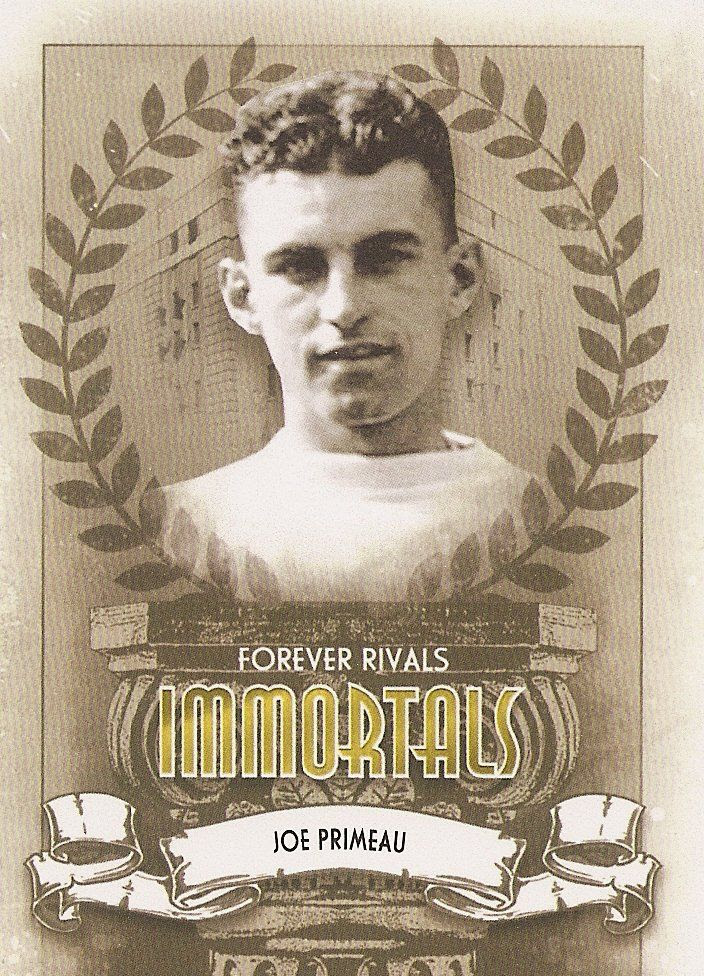 And this Immortals card doesn't enhance the product either. In fact, it's a card that looks like it could have come from any of ITG's past offerings. I think ITG could have completely left out these insert cards from their set and collectors would have been completely ok with that. I don't see collectors clamoring for these insert cards. For me, they'll go out as extras in trades that I make with fans of Toronto or Montreal. As I've said in the past, if there are going to be insert cards in a release, they should be of special or unique design - not just different looking standard cards. 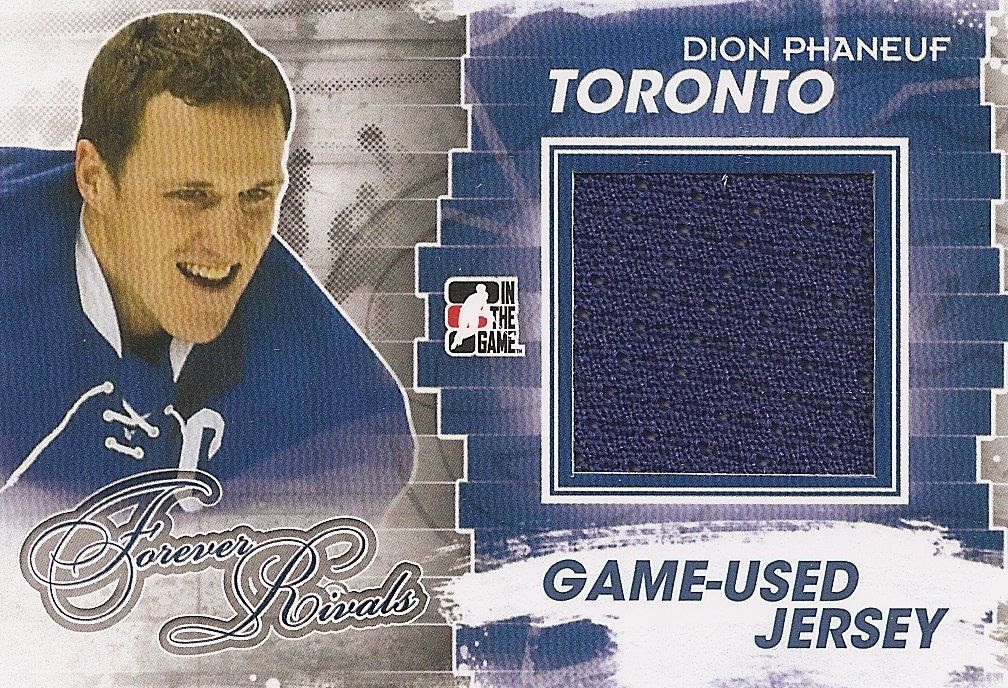 Check out this Forever Rivals jersey card... look familiar? To me it does. It's pretty reminiscent of other ITG jersey cards. While I certainly appreciate the size of the swatch and the guarantee that the material is from an actual Leafs gamer, the design of the card needs an update. We've seen this similar look to ITG jersey cards too many times. 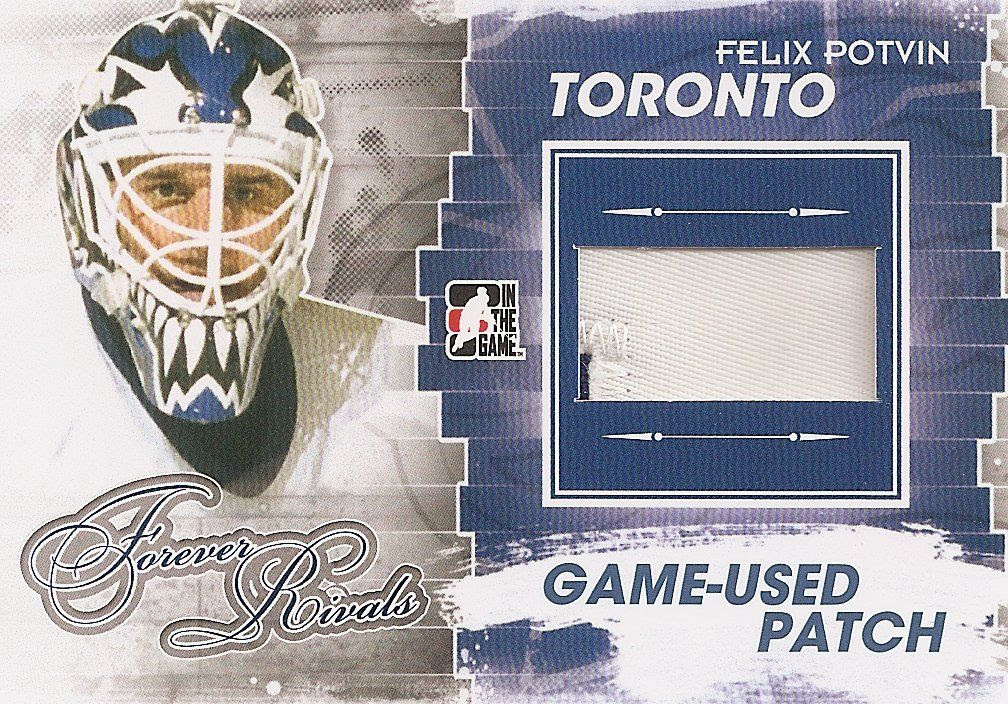 Patch card versions feature the same exact design but with a smaller piece of material. With other companies going larger and larger with their patch materials, I would have thought ITG would do the same. I know that ITG has done gigantic pieces of patch in other products so it surprises me to see these smaller pieces continue to be used. Another surprise (this time a good one) with this card is that it is extremely short printed. According to the ITG website, there are only 6 of each of these patch cards produced. It's very cool to find out how few there are of this card out there... but it's hard to tell without something more obvious on it such as serial numbering. 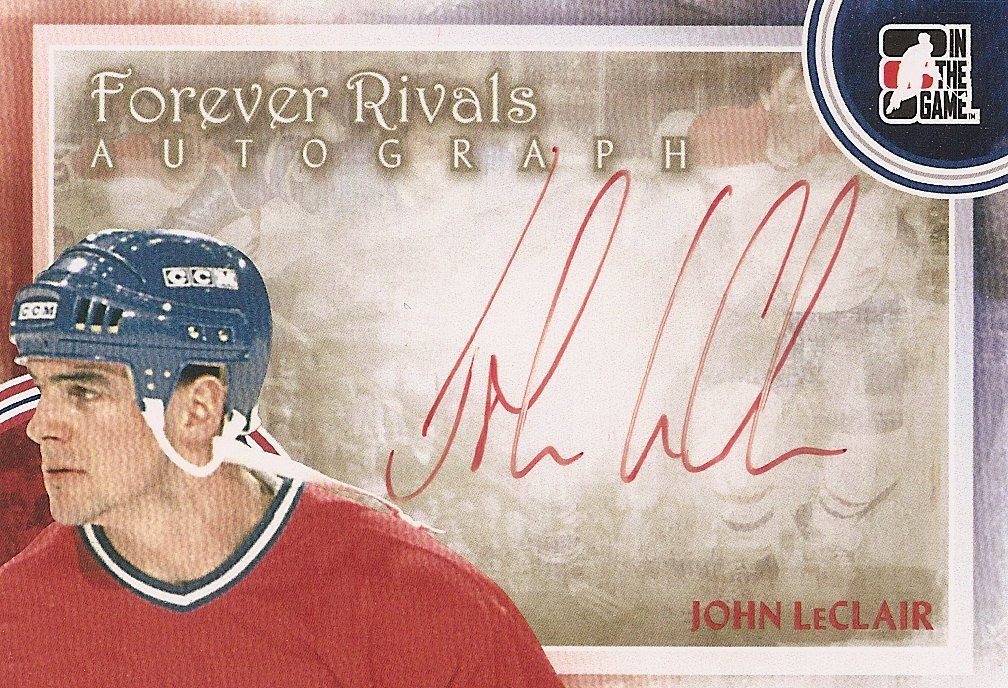 The autographed cards in Forever Rivals definitely have a design unlike other ITG cards... but I can't say I'm a huge fan of them. There is ample room for the autograph, but the overall aesthetic of the card looks a bit muted and faded. And for whatever reason the Forever Rivals logo font is different here (it's also different on some of the other insert cards as well)... kind of strange - definitely a mystery to me as to why they would not keep the logo consistent on all cards within the set. As for positives, ITG has chosen to have Toronto players sign in blue ink and Habs players in red. That is cool. It really goes with the theme of the product and highlights the difference in the teams very well. This kind of detail is much appreciated. As collectors find these autographs in their boxes, it would be a good idea to refer to the ITG checklist to see if you pulled a short print - there are definitely a few short prints to be found.

Overall Rating -
ITG definitely has an interesting product for the collecting masses in Forever Rivals. Having cards of only Leafs and Habs can be limiting... but given the desire and collectibility of the two franchises... they should be safe. I am sure that fans of those two teams will be buying this product up in spades. That being said, I wish the hits in the product had a better design. I found them to be on par with older ITG products. On the bright side, though, the base cards in Forever Rivals are awesome. If I were a Leaf or Habs fan I'd be all over trying to collect the set of my team.

Purchasing a box of Forever Rivals is a pretty safe bet as I'm sure you could find others to trade with. For fans of the two featured teams, I would get as many boxes as I could. As a fan of neither team, busting a box is still fun. And I'm pretty confident that I could sell or trade out the cards I don't want from the break.

I'm looking forward to more creative products from ITG. Who knows... one day they may have a set dedicated to the San Jose Sharks! (A fan can dream, right?)

Check out my break of ITG Forever Rivals: