Hockey season locked out and on-hold? That's not going to stop Artifacts from coming out! Upper Deck's popular hit-filled brand released this week. Collector's for the past few years have really taken to Artifacts. In fact, last year's Artifacts was so popular that the box price jumped up quite a bit from it's starting point of around $100 - eventually settling in at about $140 per box. Will this year's Artifacts line bring it strong again? Let's take a look a what a box yields. 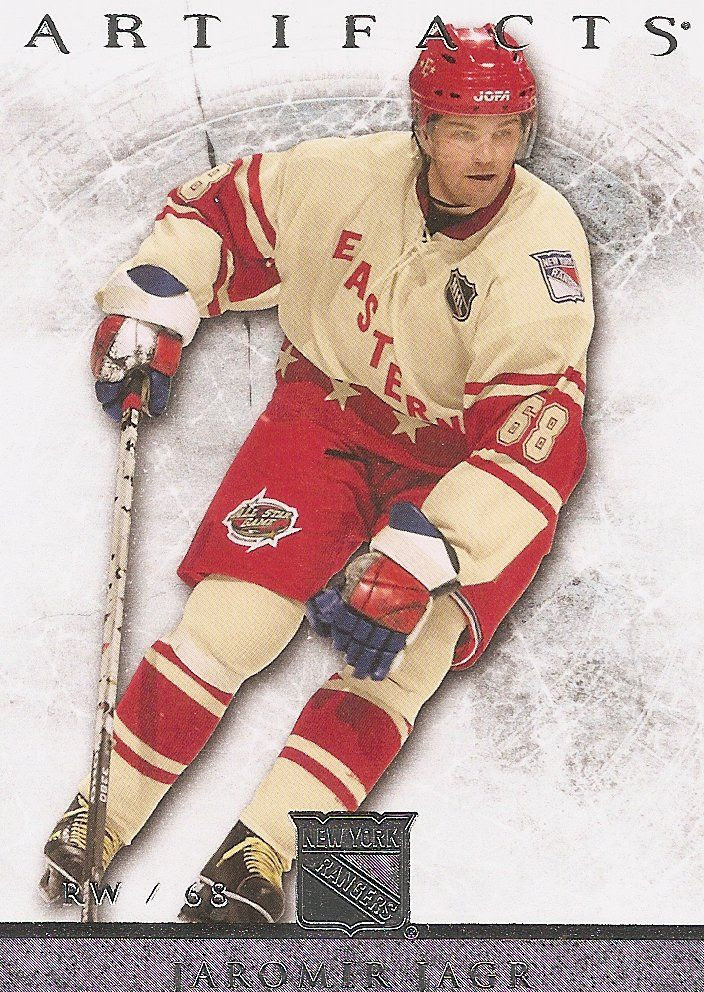 Base Card Design -
I must admit that when I saw the base cards on the sell sheet, I was unimpressed. The cards looked plain, boring, and flat. In person, however, the cards shine... literally! The first thing that caught my eye about the Artifacts base card was the amount of foil used this year. Upper Deck did not hold back on the foil budget with artifacts. The entire bottom border that includes the player name, position, number, and team logo are all in spectacular silver foil. Opposite that towards the upper portion of the card is the Artifacts brand name, also in the same silver foil. It looks really good, and I have to say that this Artifacts design is the best I've seen. The icy white background only makes the use of silver foil that much more attractive. The cards have a cold and cool look. And players really pop off the card. The only complaint may be that the player's name can be a bit difficult to read as it is etched into the foil. But all-in-all, I have to give the UD designers high marks for these base cards. 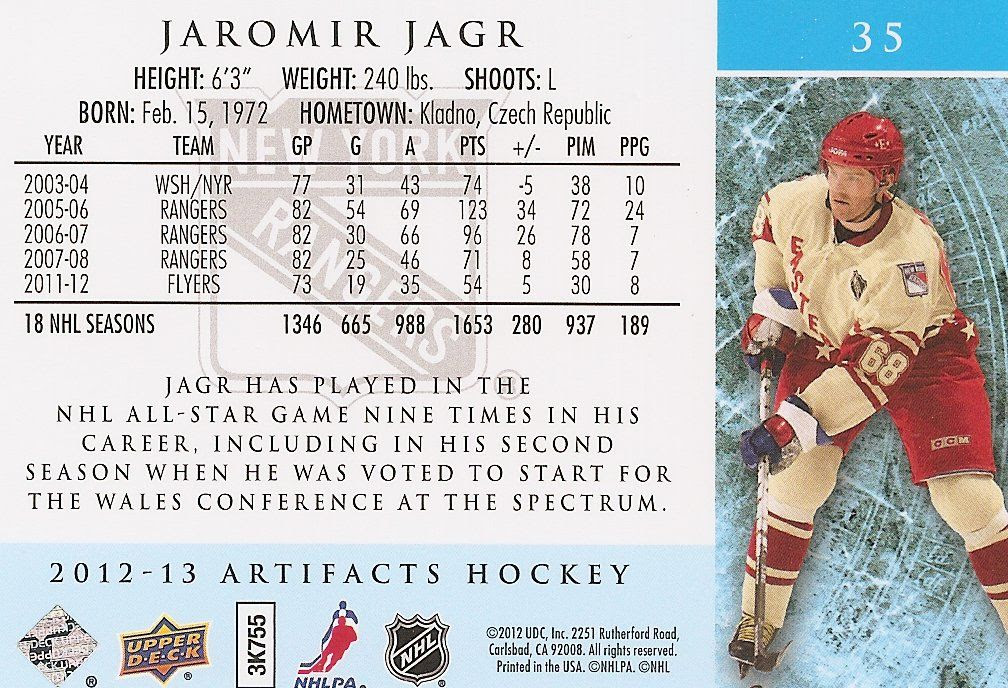 The back of the Artifacts base card is top notch. The horizontal design is perfected here by using different sections to hold different elements. The introduction of the blue tones on the back add both brightness and reinforce the cold color scheme. Each card has a limited amount of statistics as well as a short write-up of the featured player. 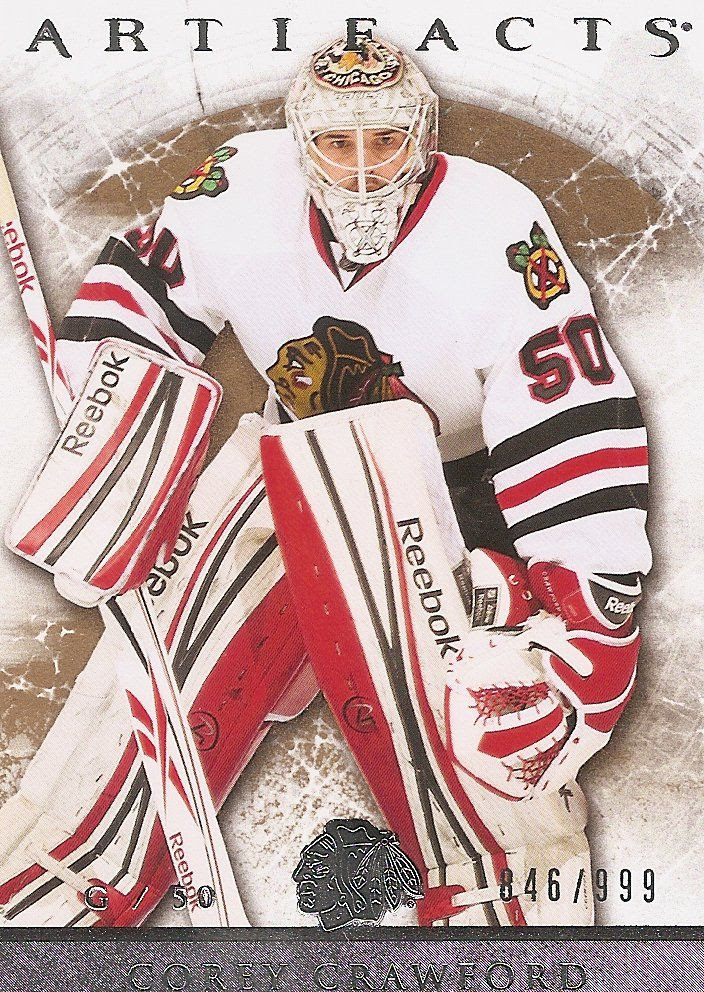 It's looking like the goalies this year get special short printed treatment. My box contained Corey Crawford and Tim Thomas, both numbered to 999. Gone this year are the Artifacts Star cards. Good choice on eliminating those Upper Deck! I never saw a point to those cards. The designs were lackluster, they didn't go for much on the secondary market, and most importantly, collectors didn't seem to care about them whatsoever. Simply making a segment of the base set short printed is a much better idea. I'm not exactly sure why goalies were chosen as a specific group to short print... but it fine. Not a huge deal. 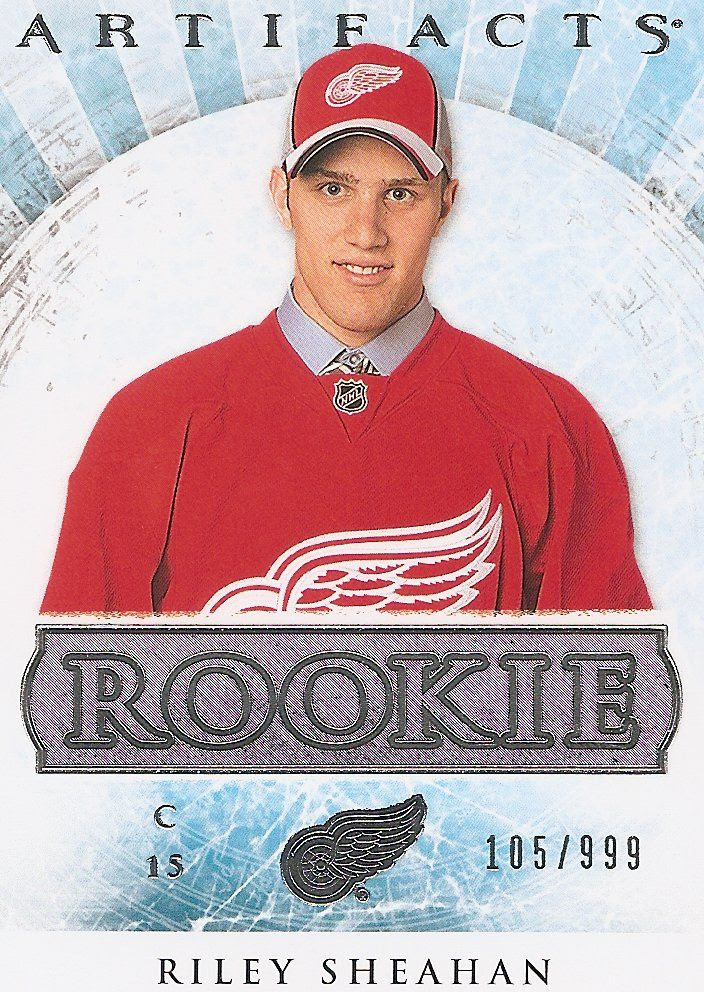 The rookie cards this year can also boast that they have a large amount of bling to them - just check out that huge silver foil rookie logo! Though by no means ugly or terrible, the rookie card design doesn't stand out in a way that makes you want them. And that might be appropriate as many feel this year's initial cardboard rookie crop will be lacking in big names. For some reason the design at the top of the card reminds me of the sun. Is it because these cards mark the dawn of a new hockey era for these players? Maybe I'm going a bit overboard there... I'll stop it at that.

Inserts/Game-Used/Autos -
Each box of Artifacts should come with three game-used memorabilia cards, an autograph, a rookie redemption card, as well as a few serial numbered inserts. It's definitely a solid combination of hits at a very nice price. 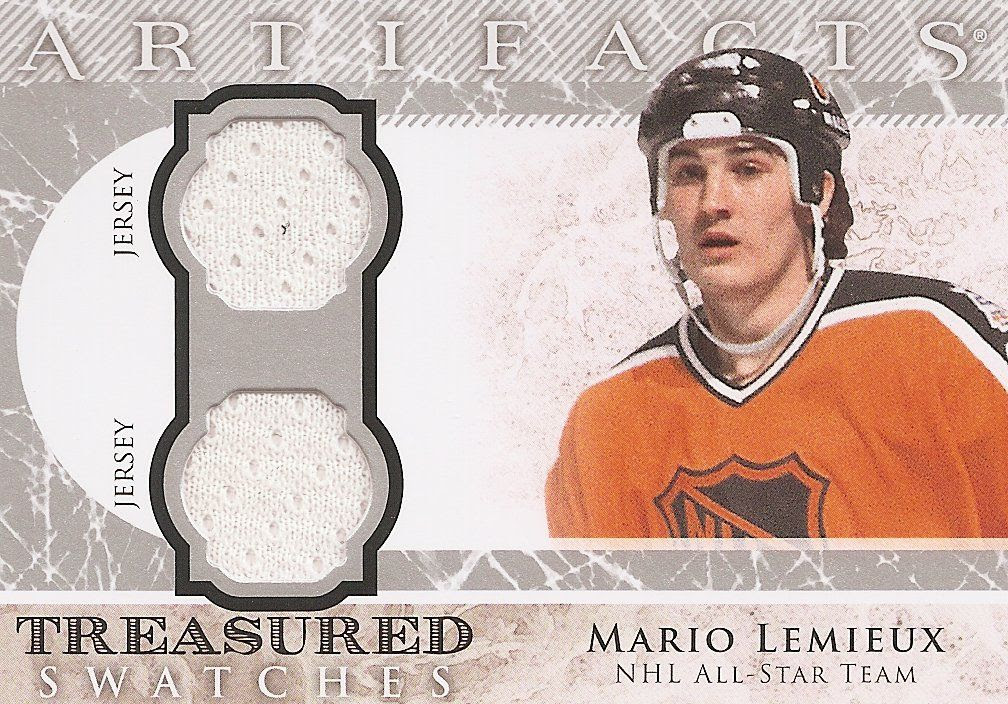 The most common type of hit in Artifacts is the dual jersey card. Collectors can find base card parallels with dual jerseys as well as themed inserts such as the venerable Treasured Swatches line. Upper Deck has done an artful job of combining the jersey pieces with solid insert design. This Lemieux card in particular is great because it fits the theme of the 12/13 Artifacts set with it's iced background and curved arch design element. I particularly like this card because it shows Super Mario in one of his old All-Star uniforms - certainly a unique picture choice. 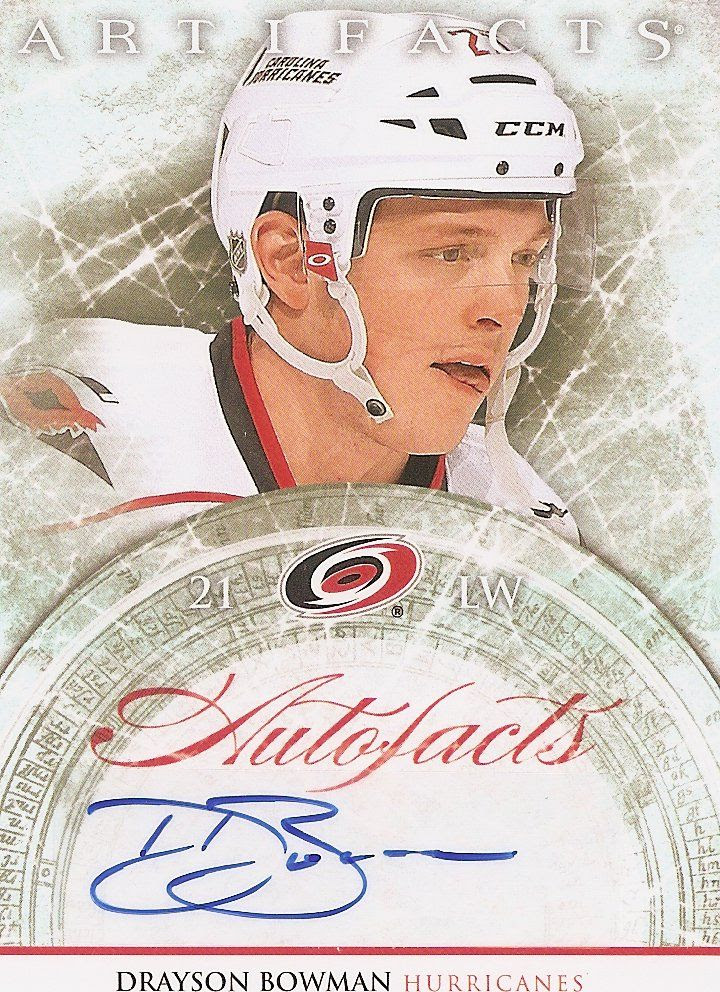 Typical boxes of Artifacts will come with an Autofacts sticker-auto card. If not... well, that means you probably got something nicer... but the good thing this year about Autofacts is twofold. One, the cards look sweet. It's a classy design with stickers that you can hardly notice that they're there. Two, I have been informed by Upper Deck that major stars like Sidney Crosby, Mario Lemieux, RNH, Jaromir Jagr, Patrick Roy, and Steven Stamkos are new additions to the Autofacts set this year. Pretty cool... but I wonder how hard it will be to get one of those top names. 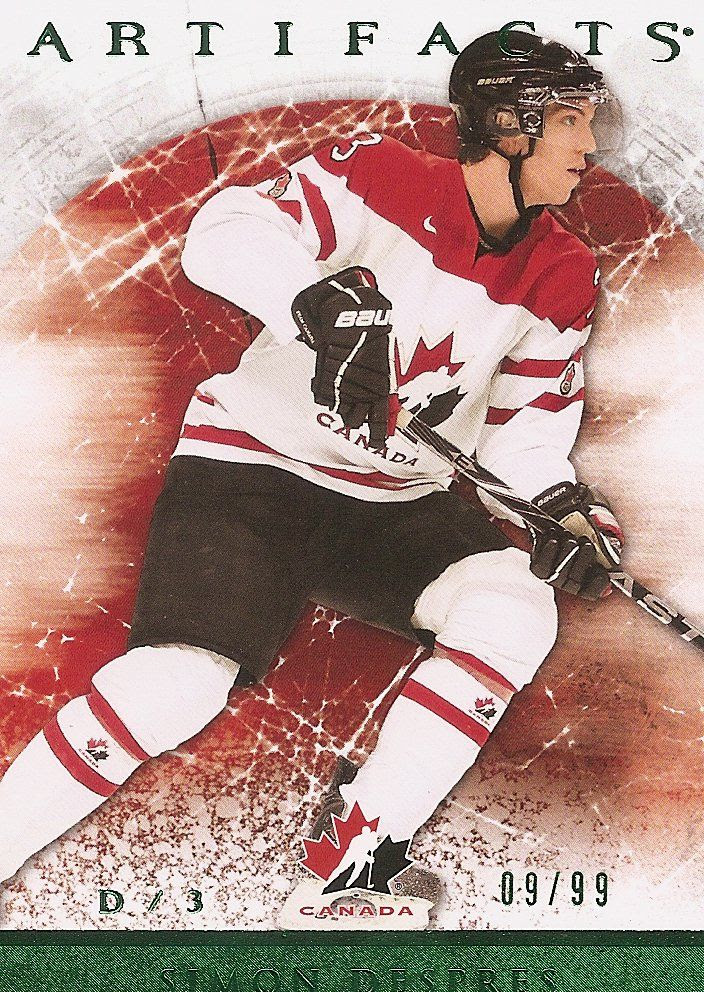 As usual with Artifacts, parallel cards are back in full force. They can come simply like this emerald parallel to 99, or can come in a form with jersey, patches, tags, and autographs. For player collectors, Artifacts is always one of the most challenging rainbows to put together. There are just so many cards to chase! I for one know that I'll be on the hunt for many Logan Couture parallels this year. 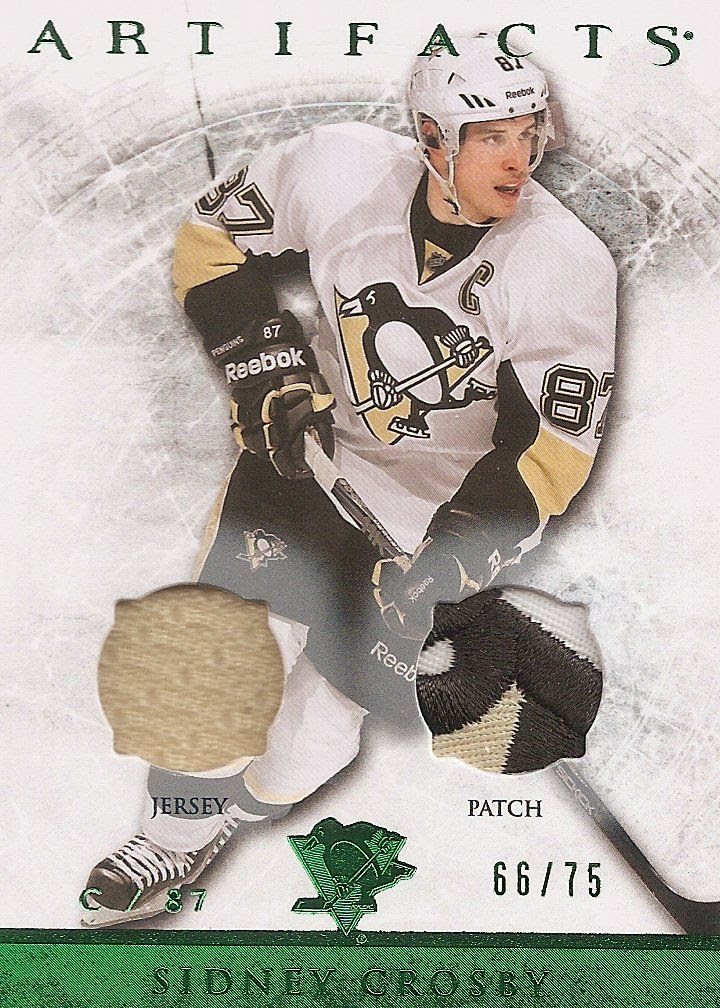 Oh, here's a nice jersey and patch parallel of Sid-the-Kid. I'm loving the patch piece they used for this card! 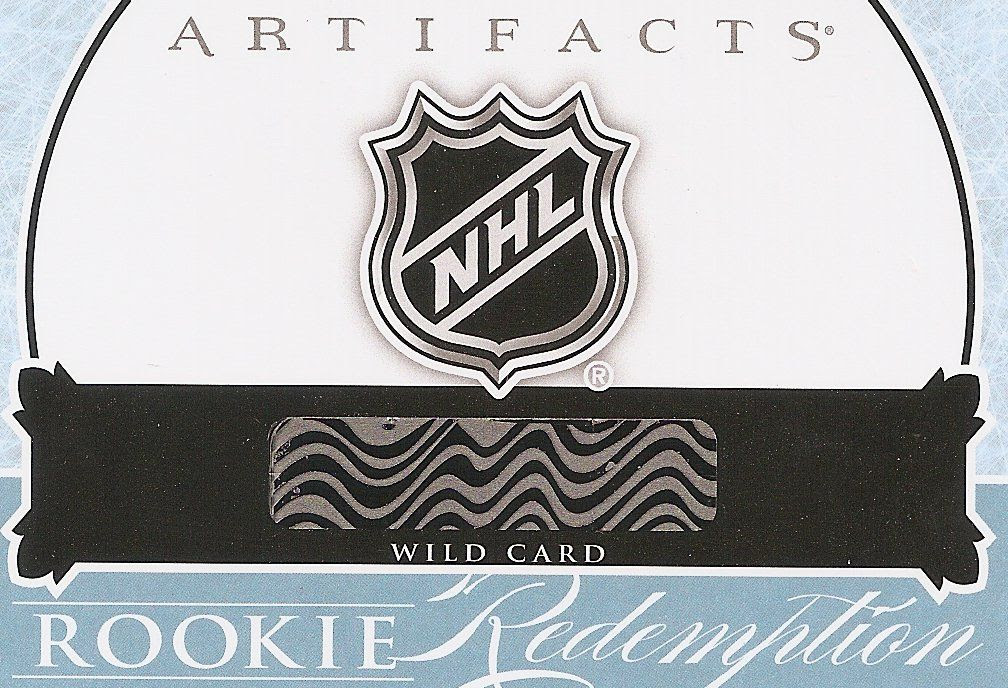 Coming in at one-per-box again are the rookie redemption cards. Anyone familiar with Artifacts knows that since Artifacts usually is released before the season starts, it cannot contain rookie cards of players who have not skated yet. To solve this problem, Upper Deck has decided to insert these redemption rookie cards into the product. I have found that these cards have a marginal following - but ultimately are not the most sought after cards. It will be very interesting this year with the lock out in effect though. If the season, gasp, is cancelled, I wonder what Upper Deck will do with these cards. We'll just have to wait and see. 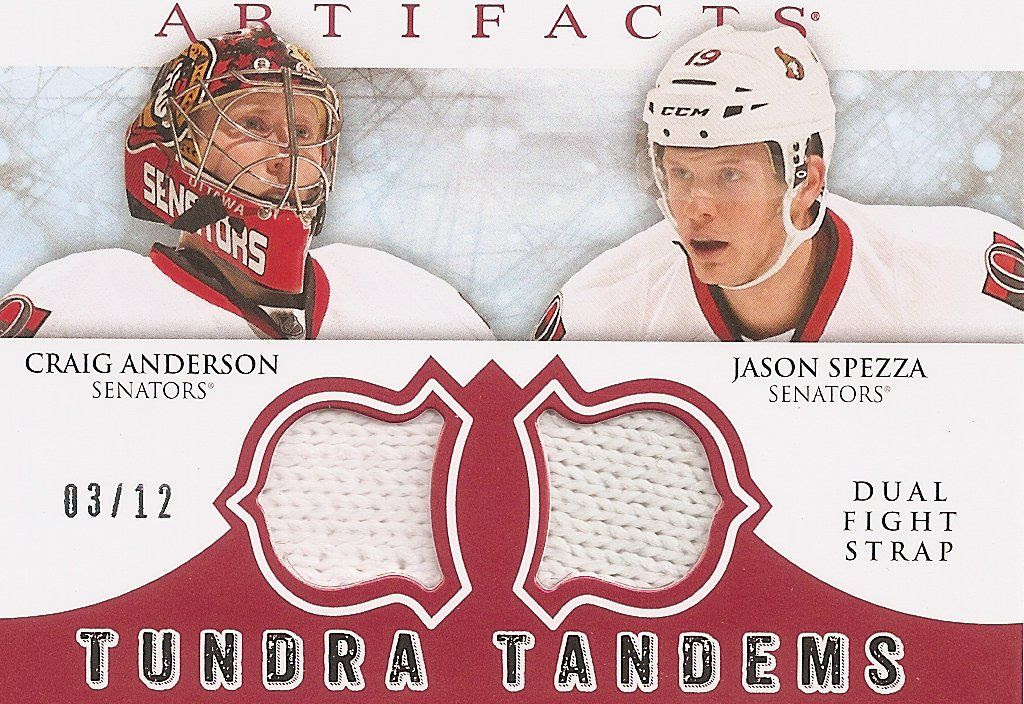 Some cards are tough finds in Artifacts. This dual fight strap card is one that is much more limited, and much harder to pull. Fight strap cards have been a pretty recent addition to Artifacts, only appearing in the last couple years. Though they may not have unique patch designs on them, they are a very unique part of the jersey, so collectors have generally liked finding them. They make a great addition to the memorabilia centric Artifacts set of cards.

Overall Rating -
This year's Artifacts looks as though it'll continue the trend of a quality, mid-level, hockey card line. Though it's definitely not a high-end product, the cards do not feel cheap what-so-ever. I have found that the designs are top notch. These are cards that look great and have high collectibility.

Opening up a box of Artifacts is really fun because of the great variety of things to find. Guaranteed are three memorabilia hits and one autograph. I always find myself wondering if I'll get a patch or an autograph of a great player. Though every box may not have a patch card, they are prevalent enough that the chances of pulling one is pretty high.

I can't predict if Artifacts will take off in price again this year as it did last year... but I would not hesitate to go out and purchase this product over and over and over again. Now that Artifacts has been released, the real hockey card collecting season has begun!


Check out my box of Artifacts from D&P Sports Cards: